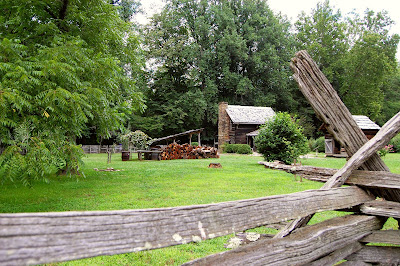 During our stay at the Cherokee Indian Reservation (see my post of 26-July-2009) we drove about 1 ½ mile north out of the Qualla Boundary to the Oconaluftee River Valley. This valley is in the Great Smoky Mountains of North Carolina. The valley’s bottomland was the site of a former Cherokee village and Appalachian community. As we drove along a country road we saw the sign to the Mountain Farm Museum and stopped to visit. (Click on pictures to enlarge them.) 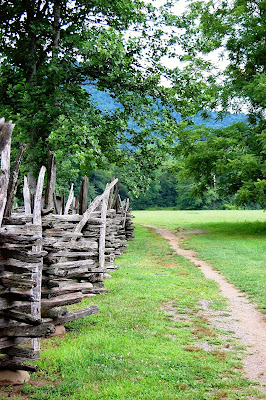 Close to the Oconaluftee River the Park Service has recreated a late 19th century mountain “farmstead” of authentic log structures. These were moved from their original locations close by. They include the John E. Davis cabin and other log buildings. Altogether they depict a typical mountain farm in pioneer Appalachia. 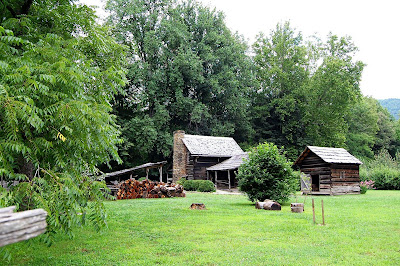 The John E. Davis cabin was built in 1900 by Davis who was a master craftsman. He built it in 2 years from American chestnut wood (before the chestnut blight decimated these trees in the 1930s.) His two sons, aged 8 and 4, collected the stones for the chimney with the help of a sled and oxen. 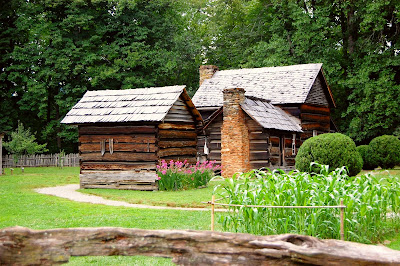 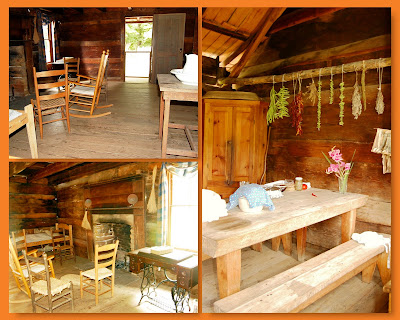 It had a flower garden, a vegetable garden and all the amenities - read “privy.” 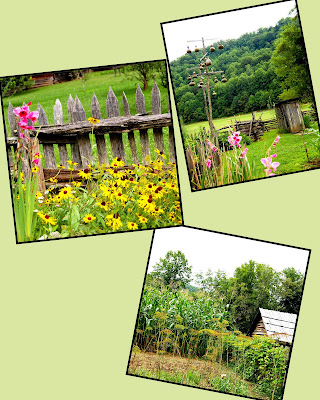 Here is the apple house, where apples were stored. Apples were an important staple to be eaten raw, or used to make vinegar, applesauce, apple cider and apple butter. 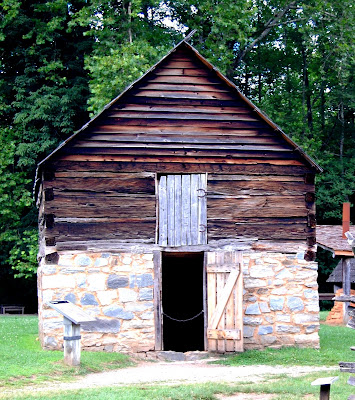 The blacksmith shop was built around 1900 and moved from Cave Code. 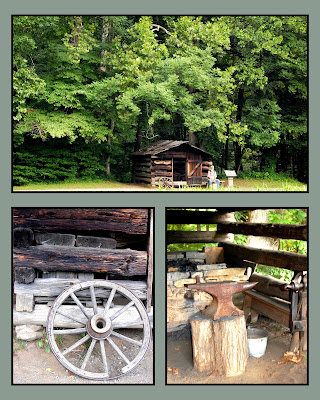 Corn was planted on the farm, as it was always an important crop. 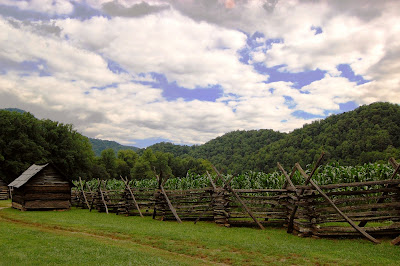 On the grounds were also a springhouse used for refrigeration, a meat house, a wood shed, a sorghum press and still. It was used to draw sweet sorghum from cane and boiled into syrup. 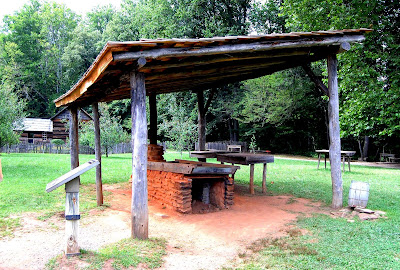 Sorghum originates from Africa and was introduced to the southern United States by slaves in the early 17th century. It is still cultivated in the southern states. The syrup retains all its natural sugars and nutrients and is 100% natural. Hot biscuits with sorghum syrup is a traditional southern Appalachia breakfast – we eat it at our house from time to time (and we had it today so I could take a picture.) Our sorghum syrup pictured below was made in Tiger, Georgia. 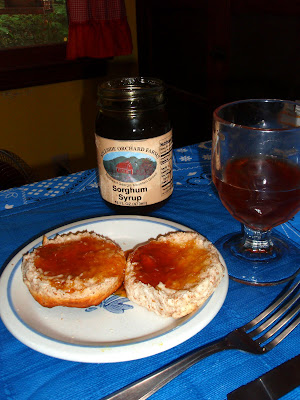 We then walked toward the barn, but first made a detour to look at the river, the Oconaluftee, which borders the property. We passed a hen (I guess it’s a hen?) then arrived at the river. 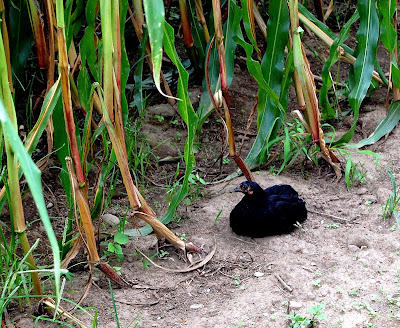 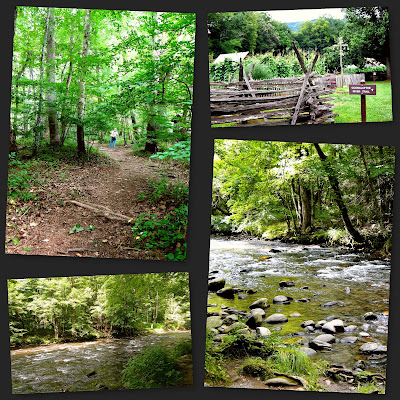 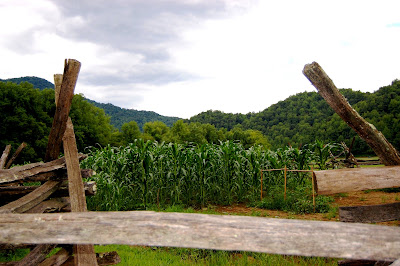 First, though, we passed the Hog Pen and had to stop to watch two little pigs sleeping. 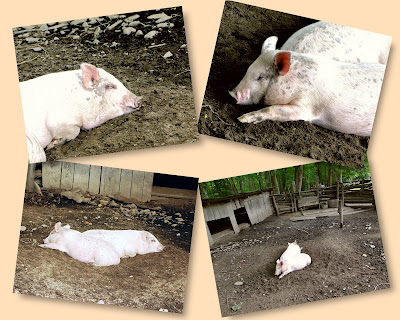 We finally arrived at the barn. This is the only structure which was originally standing at this location. The roof consists of over 16,000 hand-split shingles. It was built around 1880 and housed livestock on the lower stalls and grain in its loft. 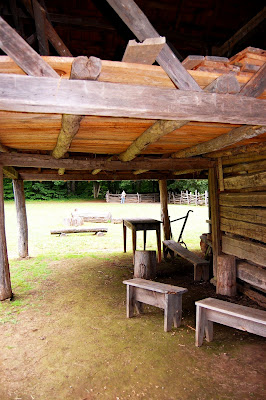 I could hear some chicken outside the barn but could not see it, or them. I looked out 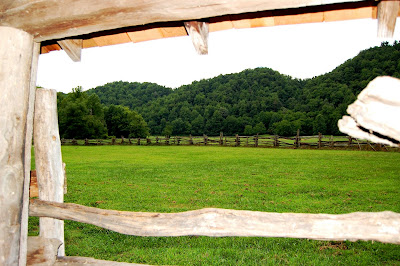 but did not see the bird. I moved to the side to see better, then I saw part of it, on the outside, in the corner 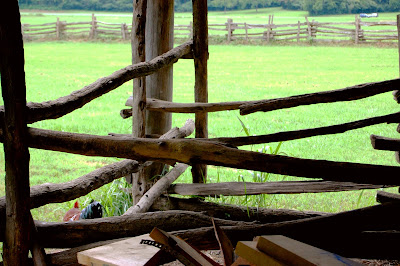 I wanted to take its pictures, so I pushed the gate and went outside – there it was 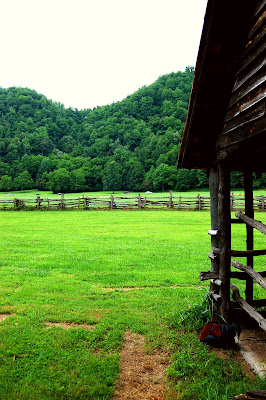 I came closer, slowly, afraid to make it go away. It did not move or looked back at me 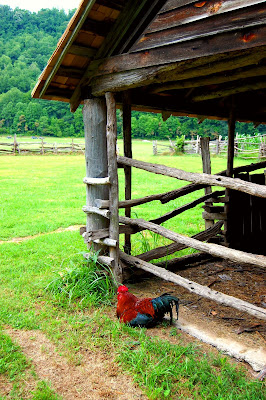 So I came even closer. Was this a rooster or a hen sitting on some eggs? 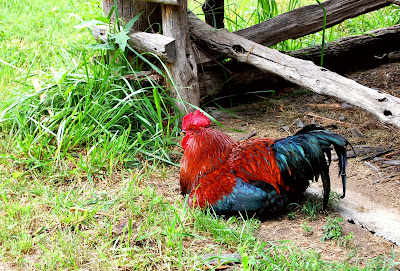 Quite a handsome rooster, but it ignored me, so I left him.

For such a large barn, there was a dearth of birds – to make up for it, here are some birds from my vintage postcard collection: 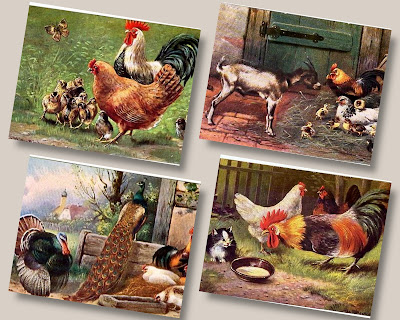 Pretty tired, I looked at the wagon wistfully 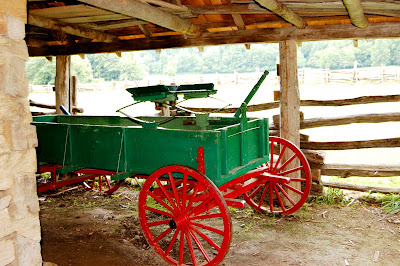 but kept on walking. 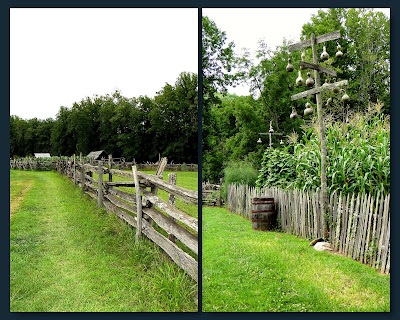 Now came the decision: should we return to the Cherokee Indian Reservation, or continue our exploration along the Oconaluftee River? 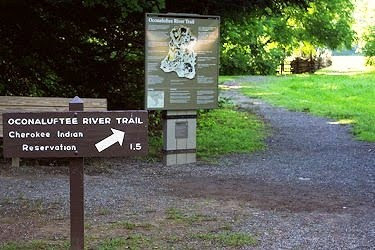 In a future post I’ll show and tell you what was decided - see y’all then! 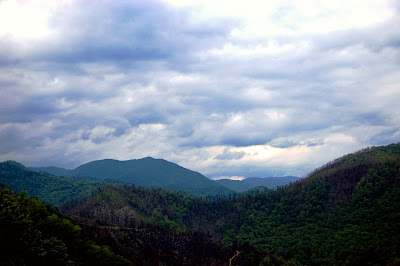 What an amazing site! You are a great tour guide. Thank you.

It is wonderful that this has been preserved. I do wonder, though, if there are pigs and corn and all the rest of it, are there people who are cultivating this farm? Even to keep it as a museum, it couldn't be so perfectly preserved unless it is also continuing to be a farm.

I am learning so much about the area from you. How wonderful that you keep making such wonderful posts. I look forward with anticipation to your next one!

Bonnie – Thanks for your comment. I was also a tour guide in Atlanta for a while, for visiting French dignitaries. It was fun. I remember one time my assignment was to find the 6 best restaurants in Atlanta for a dozen visiting French doctors going to a conference. So, for almost a week I had to dress up and take them to the most expensive and good restaurants! Of course my dinner was paid. I liked that assignment a lot!

Hi DJan – we were at the Farm Museum on a Saturday, so there was not much work being done. The museum belongs to the Park Service and I read that they are the one who supervise the planting, etc. I’m pleased you enjoyed the farm as I was afraid that this could be a boring post.

I am thrilled by these glorious photos. I don't think there is anything more beautiful than scenes like this - lots of rustic wood buildings in a nature setting. Perfect.

I was intrigued by the timing of your post too, because last evening I met with a friend visiting whose first book is coming out this year, about her family's Minnesota farm - set right at the edge of the big Midwestern Forest where it becomes prairie. And here you are posting about a woodsy historic farm.

I also meant to say how gorgeous the rooster is! My chicken-raising husband did not know what breed it is.

This exciting posting made me think of Cholilla in the Argentina Patagonia, where I visited Butch Cassidy's and the Sundance Kid's 3 cabins. They escaped justice in the US and settled in Argentina in 1901, and lived a gentlemen rancher's life for almost 5 years. Then they assaulted several banks and ended in Bolivia where it is believed that they died in a shootout.
Now pouring over your fantastic photos and reading your description, I was transported to that faraway and isolated spot.
My wandering Vagabonde, it is always a pleasure and a learning experience to come to your blog.

I enjoyed this trip back in time to mountain farm life. It is a beautiful setting and must have been a beautiful place to live, although I'm sure it was not an easy life. I love your farm animal postcards. They fit right in with the farm post. Thanks for taking us along. I'm looking forward to where we'll go next.

Thank you for a wonderful pictorial tour of a place I would not have known about, otherwise. I really enjoy your beautiful photographs along with the explanations.

I love the Indian legends and was fascinated about the story of Uktena.

Vagabonde, Your photos are superb! Absolutely gorgeous scenery and such an interesting tour. You would make an excellent tour guide! I love the cabin, the rooster, and the postcards. The natural beauty of the whole farm is incredible! Fabulous post!! Cheers!

They call him James Ure said...

Beautiful...very wonderful. I want to visit.

What a lovely tour you have shared with us. I enjoy your photos and reading about your visit here. I feel like I'm seeing it with you. Wonderful blog.

I love your trips! It is wonderful that you let us all walk with you and see everything you saw in such great detail. I love that wonderful rooster! You are an excellent tour guide and I look forward to being shown around your part of the world for a long time to come. Thank you very much.

I'd love to visit this Mountain Farm Museum. I'm interested in the old ways of farming, and I'm amazed at how resourceful and hard-working the pioneers had to be, in order to be able to make a living in the woods.
I've just come back from vacation, so I am busy catching up on blogs and bloggers.

Ruth – thanks for your comments – I just came back from another mini-trip and it was nice to see you visited my blog.

Celeste Maia - You visited Butch Cassidy and the Sundance Kid’s 3 cabins! How exciting. Did you write a post on this trip already or will you write one? I’d love to read it.

Elaine – We went and visited another farm this past week-end, and I shall write a post on it soon.

Darlene, Marguerite, Karen, Friko and Shammickite – I am pleased your enjoyed your visit to the farm with me. I hope you’ll accompany me on more trips.

James Ure – Thanks you for coming to my blog. I hope you will come back.

Merci, for visiting my blog. (I am functionally unilingual!)

I responded to your comment. It was a good question. Our problem, methinks, is enforcement.

I'm very happy you stopped here and brought your experiences and facts to the blogger world.
One thing I ponder - The Apple House:
Did they not dry Apples in Slices?

You see, I grew up with a similar museum in Oslo, and has allways been fascinated how people did live and organiced their daily life without electricty and engines we do have to day.

Here is "my" local museum:
http://www.norskfolkemuseum.no/en/

love your pics! May I have your permission to use the pic of the 1920's rum running boat for my documentary By Her Roots. you can view it on rootstelevision.com or my youtube channel which you can access from my website www.ryaneinc.com. I would give you credit for this in the credits..thanks

Any chance you have a picture of the painting called "Aunt Winchester" found inside the visitors center. If so I'd love a copy.