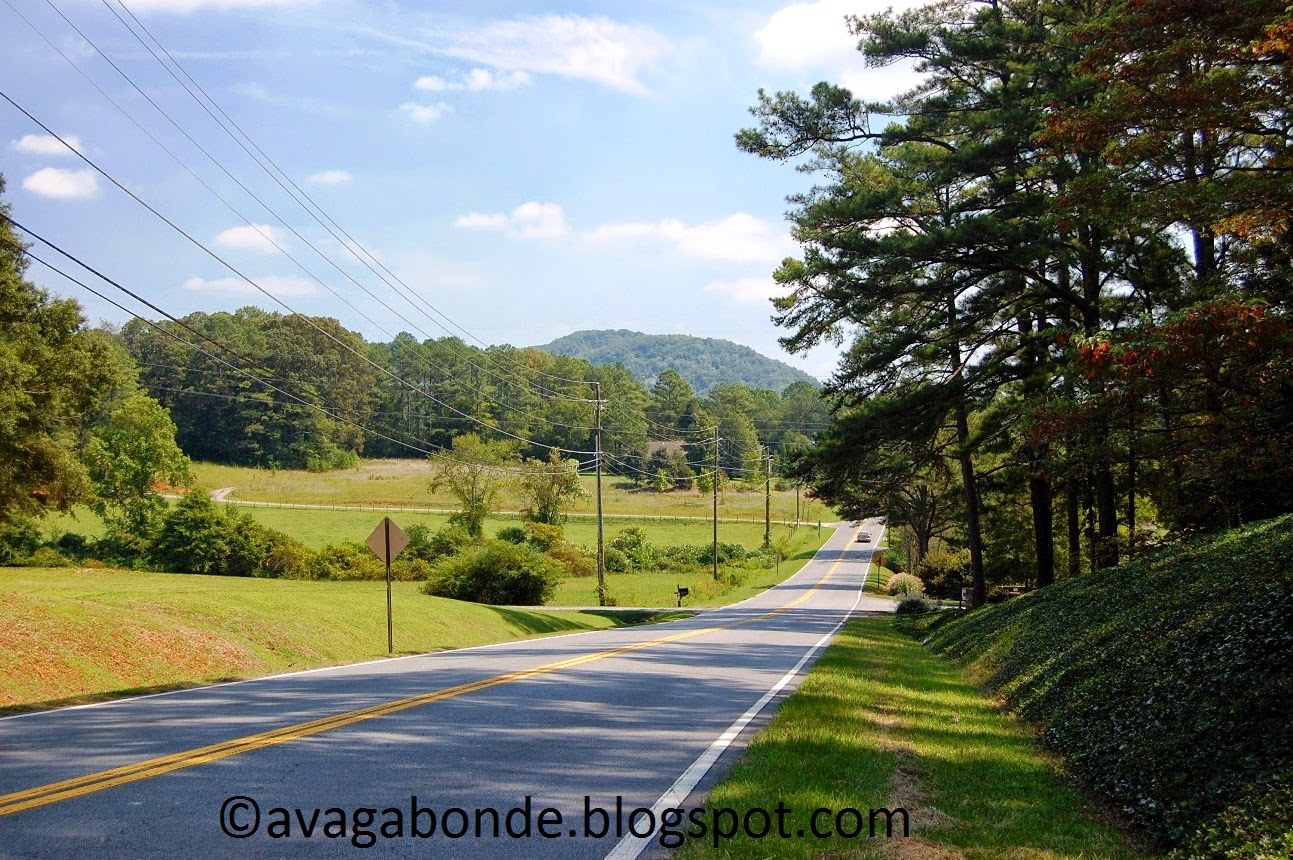 In my post of 26 September 2009 I showed how my road was closed because of flooding, so this time I would like to show my road as it looked in mid-August on a sunny day. My road is located in Cobb County northwest of Atlanta. When we moved to Georgia we first lived in Decatur, south east of Atlanta. But when in first grade our daughter Céline was tested and found to be “gifted” we decided to move in a county where the schools had challenging courses for talented children. One of my friends, Charlie, had a house in Cobb County so we decided to find a house there. Our youngest daughter Jessica was also identified as "gifted" a few years later, so they were both enrolled in the Cobb Gifted Target Program. 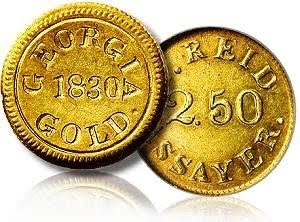 Gold was discovered in North Georgia before the Civil War which was one of the reasons Georgia wanted the Cherokee Indians out of the state. In 1830 a large number of white settlers came to obtain one of the 342 land and 4360 gold lots which were raffled off. The larger Cherokee County was divided into 10 smaller counties one of which was Cobb County. In 1834 Marietta was made the county seat. There are 5 other cities in Cobb County. One of them is Smyrna, where the Oscar winner Julia Roberts was born and went to school. Below is her photo in the Campbell High School yearbook. 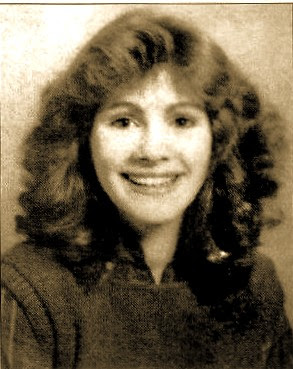 
Here is a newer photograph of Julia – 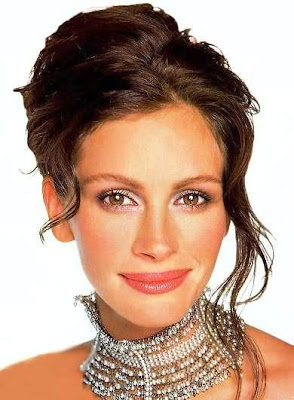 The pioneers who came found beautiful meadows, streams, rolling hills, forests and mountain peaks in Cobb County. We bought a house in West Cobb County and at the time there were quite a few farms. The road was known as Rural Route No. 4. Here is the postcard I used at the time to send our change of address to family and friends. It shows the Twin Peaks of Kennesaw Mountain. 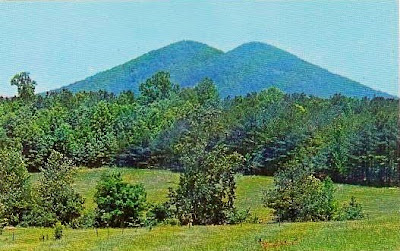 Our road goes through the Kennesaw Mountain National Battlefield Park where in June 1864 General William T. Sherman described the twin peaks of Kennesaw Mountain as a scene too beautiful to be disturbed by the horrors of war. But as you can see it was the scene of a great battle. 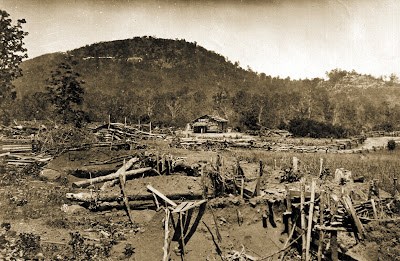 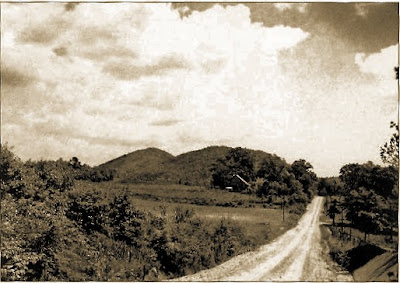 Federal Troops attacked entrenched Confederates on June 27, 1864. The attack was a brief and bloody failure. Later, the Union flanking maneuver forced the Confederates to retire to Atlanta. Below is a painting by the Louis Prang & Co. of Boston showing this battle. 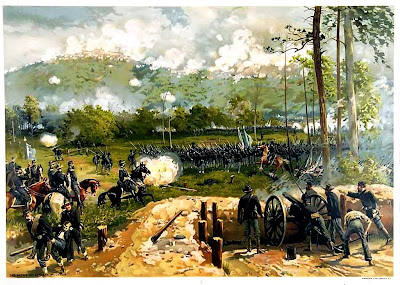 We moved to our road, pass the battle site, in the mid seventies and I drove by it almost daily to go to work. It is still down the road on our way to and back from town. 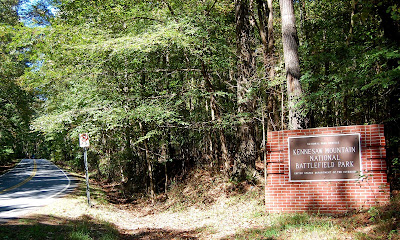 This photo was taken this morning – as you can see the leaves are not turning yet.

Hikers park on my road to walk to the top of Pigeon Hill and Kennesaw Mountain. Many tourists come as well to visit this Civil War Park. Across part of the historical battlefield is a field of non historical/non native llamas. We stopped to take some pictures – 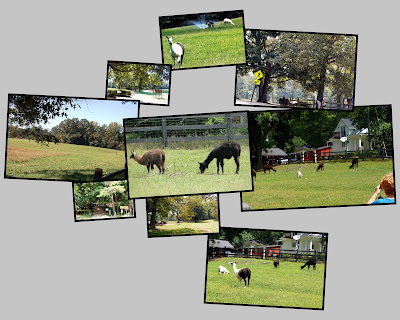 
About ½ mile from the battlefield shown above is a small trail going into another part of the park, next to the brick sign announcing the park. This trail is not marked, but we know it. We followed it that day so I could take some pictures. Civil War trenches can still be seen close to the trail. 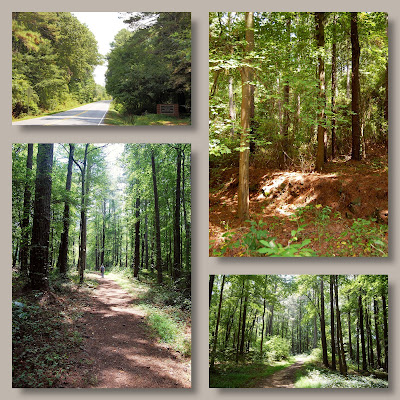 My road is pretty long, about 11 miles. It encompasses quite a variety of landscape. It has houses full of history like the one below – 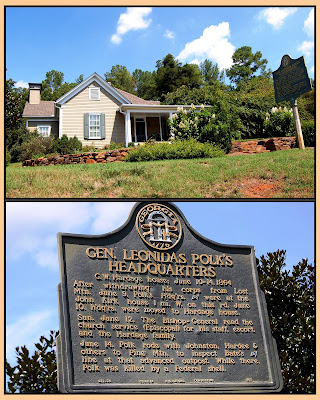 and it also has many new and beautiful houses. Their golf course can be seen from my road – 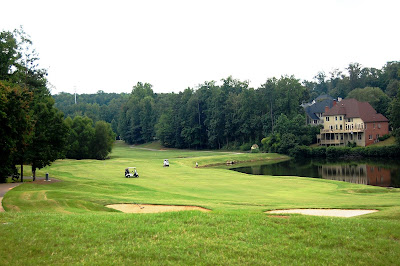 There is another page written for this post which I was going to publish today however I found out late this afternoon that this was Homecoming Day for Harrison High School which is located about 1 mile from my road. I dropped everything and went to watch the parade and took some pictures. I decided to cut this post into two parts as it would be much too long with these additional pictures. We live closer to Kennesaw than Marietta so our daughters attended North Cobb High School in Kennesaw which is about 8.5 miles away. A few years ago Harrison High School was built and it is only 1 mile away. This high school has received many awards the latest being the invitation to have their marching band perform at the Macy’s Parade this next Thanksgiving in New York City. This is a high honor as only 11 high school bands are invited among the 50 states in the country. Several students have also been invited to perform at the Rose Bowl Parade in Pasadena in 2010. Many an evening we can hear the band playing from our house.

The parade started with the Cobb County Sheriff throwing Sheriff star stickers to the kids on the road – a facsimile star as seen on his police cruiser. 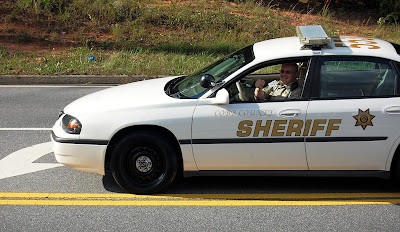 The Honor guard was next – 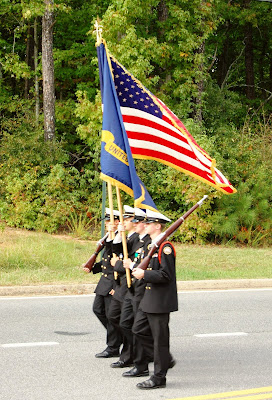 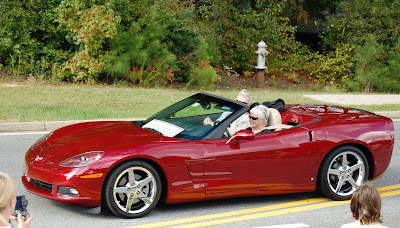 The Harrison High School Band and the Flag Corps came next – 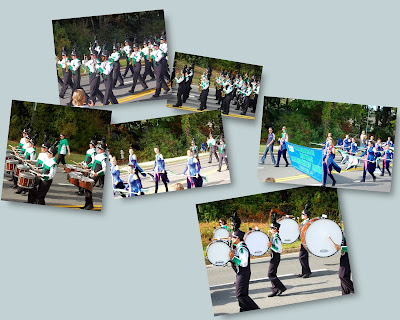 Don't forget to click on the pictures to enlarge them 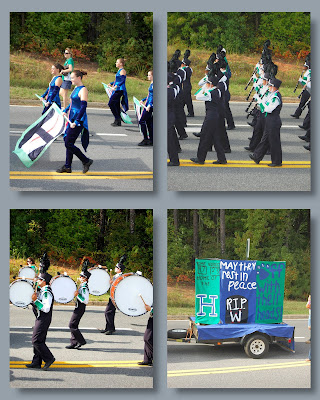 The Homecoming Queens rode by throwing candy to the kids – 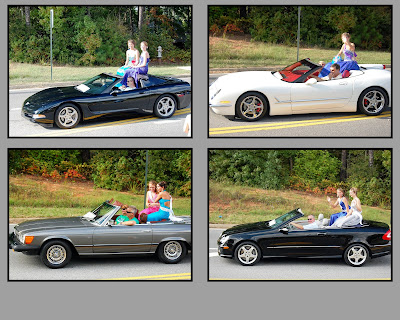 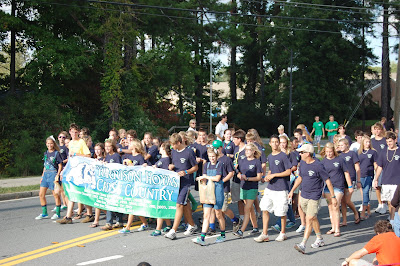 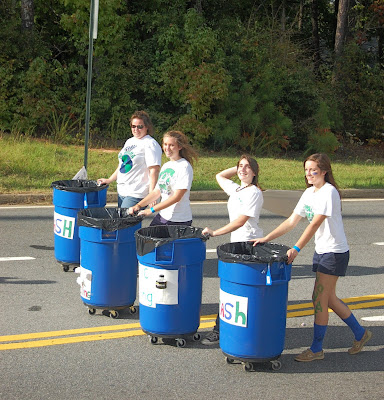 The Park Ranger ended the Parade. 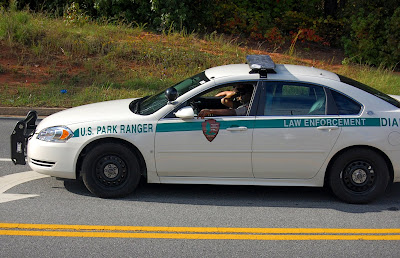 Hope the roads are not damaged after the floods, roads get washed away here in India due to poor quality.

though not a pleasant reading we have to know our history. Though we claim to have evolved, greed seem to be still with us humans.

i have never heard of schools for gifted children, hope your children received the best of education.

Typical Julia, age and success has only broadened her smile.

Rauf – There maybe schools for gifted children but they would have to be private schools. In public schools they usually have classes for children who need special help, who are slow learners, etc. but courses for children who are gifted are rare. The child has to be tested and found to be from above 90% to 96% of the rest of the children in creativity, mental ability, motivation and achievement. It can be a problem for a child who learns too fast as for one who learns slowly. The University of Georgia also offers special challenging courses on the week-end for gifted and creative children. My children attended those and also took advantage of the Cobb program where a child can finish high school and start college simultaneously. As for the roads in Cobb County – quite a few were washed away.

As usual, your post is well researched and carries vast amounts of interesting information. I love the pictures showing all the different dramas unfolding in front of those mountains. And Julia had that same big smile when she was a girl, didn't she? Your children are gifted too, as are you. I am not surprised that they take after their mother. Thank you for this and I look forward to the following one. By the way, the shin is the bone that runs up the front of the leg, and I'm getting better, I can walk around without too much pain.

You live in a very beautiful part of the country. I'm sorry the floods caused so much damage. The photos of the civil war battlegrounds are interesting and it documents one of the saddest wars in our history.

Congratulations on having, not one, but two gifted daughters. I am sure they are successful in life. I agree with Djan that their mother is gifted so it's no surprise that her children would be too.

Tucson has a magnet school for gifted children and it is a public school. My daughter was eligible to attend, but didn't want to leave her friends. Transportation to that school would have posed a problem, also.

Wow you live in a beautiful part of the world alright. And I have to say, recently we had a football parade near where I work and we are dreadful at putting on parades, simply woeful. The Americans have taken this to a new artform. I must admit . . I had to 'Google' Homecoming . . we don't do it here!

You live in a very beautiful spot. I love the way the students celebrate Homecoming Day. I just watched Pretty Woman the other day; Julia Roberts is great. What career paths did your daughters follow?

I was very happy to see my Fav actor Julia Roberts & her College days picture ...... apart from the useful chronicle you do .... :)

Beautiful area! I liked seeing the road at different points in time.

Thank you for showing us the beautiful area where you live and describing eveything so eloquently.
It must be rewarding but challenging having two gifted daughters but it's good to hear that they are not being held back at school.

a very interesting road you live on. if one digs deep enough one finds all sorts of historical facts and figures from back in history up to the present day, as you have demonstrated beautifully here.

It is also a road which leads through beautiful countryside.

Very interesting post and great photos, as always! That battle has always fascinated me, for some reason. Beautiful countryside and nice parade, too!

Excuse me, I really thought I have commeneted this post.
But, it seems I have not.
Sorry.
Your travelling posts are really important for me, and I learn a lot every time I read.
I simply have to learn more about the Homeland of my youngest Son and most of my Family.
And you are a very professional guide for me.

Have you ever thought about visiting the Viking Capital?
Well, it will be a blogger meeting there in August next year.
http://toraa.blogspot.com/2009/10/oslo-blog-gathering-2010-preview.html

I am glad you showed the photos and postcards from the history of your location, that was very interesting. My sister lives in your area, and I recognize the woodsiness. Atlanta has become very posh now in some parts.

I realize your autumn has not come yet, I do hope you can experience some color before you leave for France.

What a nice honor for your local school to send kids to the Macy's parade, and to the Rose parade. These events are such highlights in their lives, they should be proud.

There is so much in this post, I hardly know where to begin. First, I love the painting by Louis Prang & Co. It is a real historic treasure.

Why does not surprise me that your children are gifted?

Julia Roberts looked pretty good back in the day. But I think it's her personality that gives her her true beauty.

I love the wholesome fun of a homecoming parade. We ran into one when I was spending the weekend with my book club in Carmel.