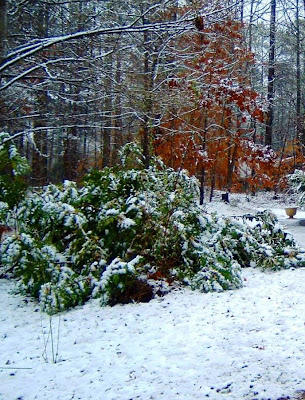 The picture above is not what we would see walking outside today (no snow yet) and it is 60 degrees F (15.5 C.) This was a picture I took one day last year in January. We were so surprised to see snow covering our garden that morning. I hurried outside and took some pictures because it was not very cold and it would soon melt.

Also last January I took the following series of snow pictures - this was our back yard then; you can even get a glimpse of our neighbors’ lake in the background - 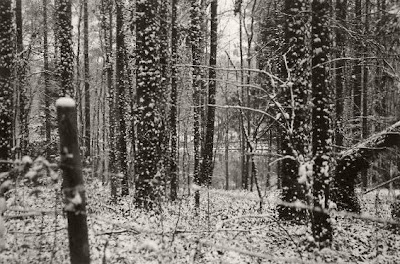 and part of our barn 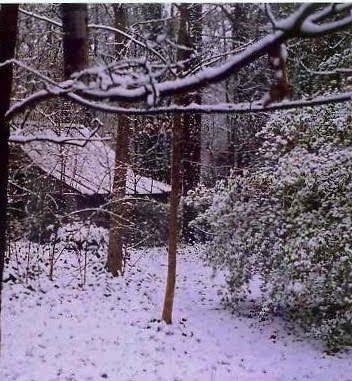 one of the bird feeders 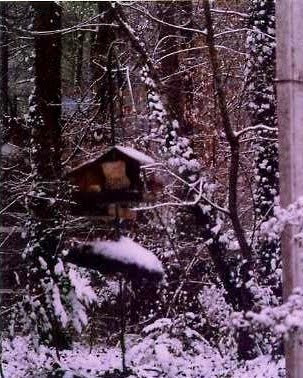 looking toward the front of the house 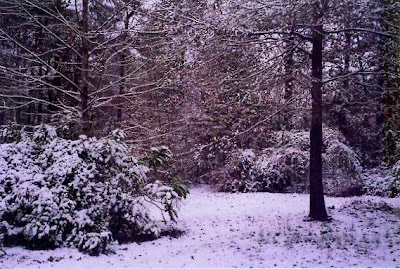 and the side of the house 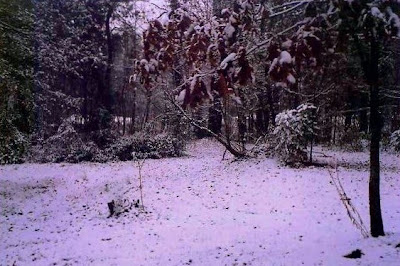 then we took our cat Cody so he could smell the snow – he was terrified. 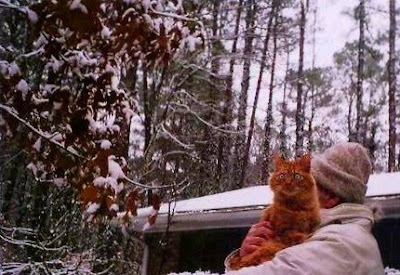 A few hours later the sun was peeking out and the snow was already melting. So sad – in the Deep South snow is not a frequent visitor. 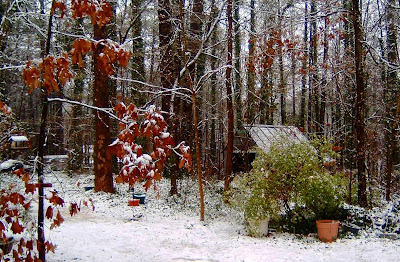 Growing up I do not remember this much snow in Paris either – there would be some snow for a couple of days, but it would not last too long. I do not have pictures from that time but found the one below (free photo courtesy of Life.) 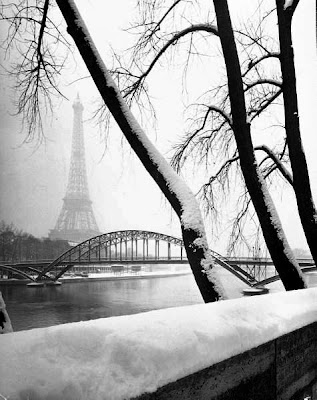 My mother’s friend, who was a furrier, gave her some rabbit fur remnants. So mum made me a fur cape, a fur hat and a fur “manchon” for my hands. I don’t know what you call this in English but you can see what it looks like in the painting below. It is called “Dame au Manchon” and was painted in 1880 by Berthe Morisot, French painter (1841-1895.) I loved my cape and was always wishing for snow, or at least some cold weather, so I could wear it. 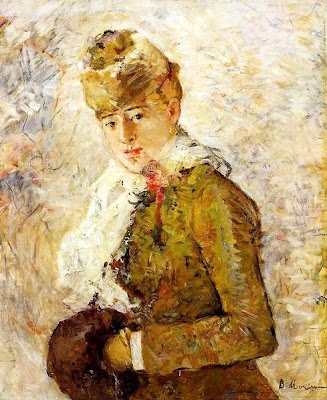 Mother made another cape, years later, for my daughter. Here is a picture of Céline in her white fur cape. 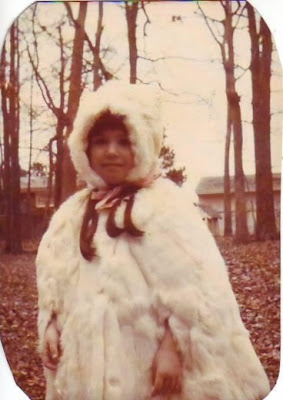 When I moved to San Francisco, there was not much snow in winter either. My boyfriend lived in Montana and his family invited me there for my first Christmas in the USA. When the plane approached Great Falls it circled above the city but everything looked white from the sky. When the aircraft started the descent we could then see the great city trees covered with snow and decorated with vibrant lights. This was fairyland to me. 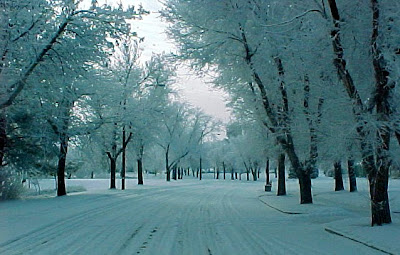 But that was many winters ago. Now in Georgia – I am wishing for snow – one or two days would be good so we can go out – listen to all the muffled sounds and look at everything turned clean and white. 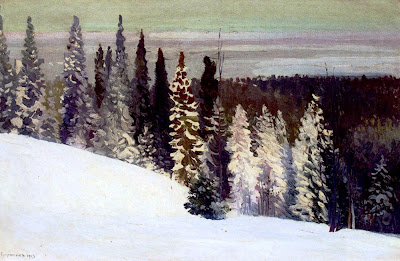 Here is a stanza from the poem “Winter’s Spring”

I love the snow, the crumpling snow
That hangs on everything,
It covers everything below
Like white dove's brooding wing,
A landscape to the aching sight,
A vast expanse of dazzling light.
- John Clare, English Poet (1793-1864) 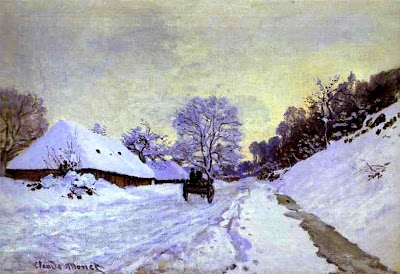 And for my French speaking blogging friends, here is the last stanza from the poem “La Neige”

And for my Jewish blogging friends I’d like to wish them a Happy Chanukah. 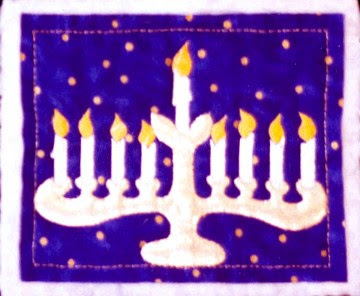 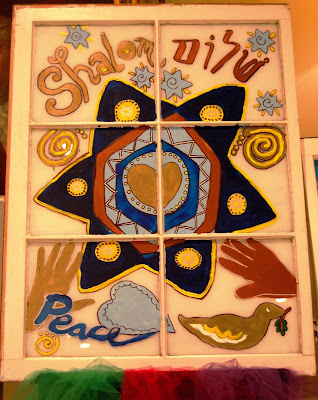 The second picture is just great :)

By coincidence I put up a post in the Purple Coo Common Room only the other day about this very subject. http://www.purple.dreamhosters.com/common/index.php?blog=11292

We too live in an unsnowy part of the world, but I do love its blanketing quietness - the stillness, peace and above all the cleanliness of fresh snow.

(I also love that expression on your cat's face. Dogs however seem quite untroubled even by deep snow when they see it for the first time in their lives).

I wish you could have snow this year in Atlanta. I hope we'll have it in Michigan! We have a thin layer now.

That Paris photo is just breathtaking.

We call the hand warmer a "muff." They are sweet and feminine.

The paintings and photos of snow are so lovely too.

The Snow Man
by Wallace Stevens

One must have a mind of winter
To regard the frost and the boughs
Of the pine-trees crusted with snow;

And have been cold a long time
To behold the junipers shagged with ice,
The spruces rough in the distant glitter

For the listener, who listens in the snow,
And, nothing himself, beholds
Nothing that is not there and the nothing that is.

wish i could feel the snow too..

I also just love the picture of Paris in the snow. We just got our first snow of the season last week, and it was lovely. Then we got freezing rain, which is not so lovely. I skated out to the bus stop yesterday because the slight hill made it impossible to stop! Your cat is also lovely and BIG! The bird feeders caught my eye, of course. Thanks for sharing your snow dreams with me!

Beautiful snow pictures -- and the one with the cat made me laugh out loud! His expression is hilarious!

«Louis» thanks you for your kind comments at his blog.

As always, he also enjoys your posts that include something about la belle France!

Vagabonde, has nobody given you an answer to your question?
The lady is covering her hands in a 'muff'. It might be a rude word in American, I'm not sure.

I hope you get as much snow as you want for Christmas and that you will be spending a happy time with your family.

No Friko, the word 'muff' is not rude in America. As was pointed out, that's simply the name of a manchon. (I'm afraid it might be a slang term for a part of a woman's anatomy, though.)

I have been in deep snow, have been snow bound, caught on the freeway in a blizzard, been so cold I thought my feet would fall off and even played in the snow. Having done all that, the only snow I want to see is in photographs.

Thanks for sharing these wonderful snowy memories - both from last year and in the past!

As a Norwegian, I feel almost like home watching and reading and it kind of put me into Xmas mood too :-)

Right now, in Oslo, we have just a couple of inch of snow, but up in the mountains it's enough to go skiing.

So there is hope for a White Christmas :-)

Be careful what you wish for..... Lovely post and your photos and poems were wonderful! Too cold, for my Southern blood, cher, but beautiful. Cheers, bon ami! Happy Holidays!

I just loved all of your snow pics... esp. the one with your cat!! And, everything looks so magical and beautiful when covered in a blanket of fresh snow....
I love the Paris snow pics... I have not yet seen Paris in snow, really... (or maybe just a little) but when I have gone up there when there was a lot of snow in Antony, there was none in Paris- except in the parcs.. but the streets didn't have snow... my friends who live in Paris didn't even know it snowed... hahah!
It didn't snow here overnight, like they predicted so I didn't wake up to white this a.m.!!
Take care and thanks for stopping by my blog! I'm going to add you to my blog roll now!
Take care,
Leesa

If you get snow in Atlanta this year, Vagabonde, please let us know. Having lived there the last 22 years, I know what a rarity it is. And when it comes, the city goes crazy because there are no snowplows and no one knows how to drive in it except the "foreigners." We have had snow here in Holland the last two days...also a bit of a rarity. But the cold is FREEZING cold, similar to what I remember while growing up in Michigan. It's beginning to look a lot like Christmas. :)

LOve your snow pictures. We have the real thing here now and our cats all have different reactions to it.
Mustard and Pepper won't even put their noses outside; Chloe gazes wistfully from the doorstep and then decides she'll stay in; Parsley dashes out then realises that her feet are cold and runs back inside; Toby, the oldest goes out for his wee and comes in as quickly as possible; Holly and Willow are the only two who actually enjoy playing in the snow and they stay out for ages chasing each other and pouncing on things under the snow.

Bhavesh Chhatbar, Fennie, Wenn, Unseen Rajasthan, DJan, Vicki Lane, Louis la Vache, Friko, Darlene, RennyBA’s Terella, Marguerite, Leesa, flyingstars, Ginnie and Sablonneuse – Thank you all, dear friends, for coming to my blog at this very busy time of year. I appreciate your visit and your time very much and am so happy you stopped by and made a comment.

I have a friend in Paris as I write, she arrived just in time to see it whitened with snow and said it looked like a wedding cake. How lucky for a Brisbane girl to hit France amid a rare snowstorm.