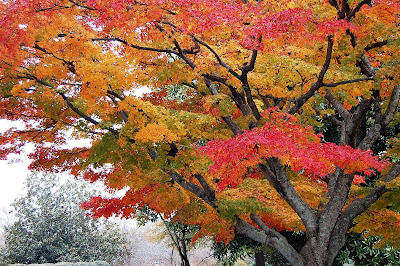 There is something in the autumn that is native to my blood,
Touch of manner, hint of mood;
And my heart is like a rhyme,
With the yellow and the purple and the crimson keeping time.

The scarlet of the maples can shake me like a cry
Of bugles going by.
And my lonely spirit thrills
To see the frosty asters like a smoke upon the hills.

There is something in October sets the gypsy blood astir;
We must rise and follow her,
When from every hill of flame
She calls and calls each vagabond by name.
– Bliss Carman, Canadian

Bliss Carman was Canadian. Born in New Brunswick in 1861, he died in 1929 and was at the time one of Canada’s most acclaimed poets. His poetry included vivid descriptions of Canada’s natural landscape. He was recognized as a regionalist poet from his home, the Canadian Maritimes. His poems on Canada’s natural areas, wilderness and the sea had a compelling atmosphere. In 1928, one year before his death, he was named poet laureate by the Canadian Parliament. We visited St. John, New Brunswick, last year but did not see much of the countryside. Instead I’ll post below a picture I took on a walk in the North Georgia Mountains last fall. 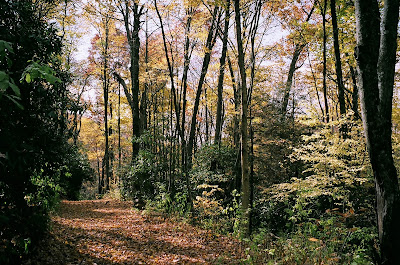 We visited Victoria, BC, Canada several times. The first time we were at a Bed and Breakfast close to Emily Carr’s house. We toured the house and, as I am known to do, researched her life and work. I purchased several of her books. She was a talented painter and writer (1871-1945.) 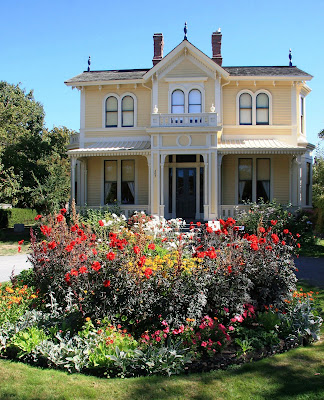 While I was studying Emily Carr’s work I found out that she was connected with the celebrated “Group of Seven.” I checked them out and fell in love with their style of painting. They were a group of seven Canadian landscape artists of the early twentieth century, influenced by European Impressionism. Painting no.2 and no.3 are from members of this Group of Seven.


I took the picture at the very top of this page in the gardens of the Georgia Governor’s mansion last fall.

This is a beautiful interlude while you are away, Vagabonde. Each Canadian artist is talented and soulful. I especially love the Lounge Chair painting, what I wouldn't give to be sitting right there, reading and looking out.

Imagine having the name Bliss!

Vagabonde, this made me a bit homesick. I too love the work of the Group of Seven, even though many of their paintings depicted areas of Canada that weren't familiar to me. Even so, I feel that these beautiful landscapes are part of my soul.

(PS I am in complete admiration of you and your organizational abilities. Pre-programmed blog posts are beyond me.)

Wow! These are spectacular pictures, VB. And I must say, you don't need an October to set YOUR gypsy blood astir (as Bliss said), since you seem to be called year round to rise and follow her. I love the fact that her name is Bliss, so you are following your Bliss... :-)

Bonjour, Vagabonde ... beautiful, as usual, from a writer/historian. The autumn colors are lovely and the North Georgia mountains are quite familiar. The photo of the GA Gov's mansion is exquisite with the colors of Georgia in the fall.

I was unaware of Canada's poet, Bliss Carman ... but enjoyed this piece you presented.

Stunning post! You got us in the mood, all right!

Your opening photo is gorgeous! Beautiful contrast of colors.

I enjoyed reading Carman's poem and the rest of this post while listening to Yves Montand from the clip in your previous post. Now I would like to move with my laptop to that comfy chaise longue. Or maybe leave the laptop and just take a brief snooze...

Those are some lovely paintings! It brings warmth and joy to those who hang these on the walls at home, esp in cold winter nights. :)

The oranges & reds - my favorite colors, btw. This is why I LOVE blogging - I learn so many new things - my library & places to see is growing, that's for sure! Enjoy your "blogger break!"

Thank you for the inspirational poem and art work. As you well know the fall has come here in Norway and we are enjoying the crisp cool air and lots of lovely colors!! Have a nice weekend.

Simply lovely. I do like the work of Bliss Carman, whom I had not been aware of till seeing things here.

It is such a lovely fall time -- in Michigan we are enjoying it to the max!

Enjoy your travels, wherever they are!

Beautiful and so touching, in words and images...
There is something melancholic, yet almost tranquil about autumn I feel.
Have a lovely weekend,
xoxo

A pre-programmed post it may be but it is a very beautiful one.
As always, well researched and beautifully presented.
Thank you, Vagabonde.

Love the pictures, Vagabonde, the autumn, fall, my favourite season, although your man there is not my favourite poet with his broken rhythmns.

How lovely to see all those beautiful works on your blog! Last week we were lucky enough here in Victoria, to have unveiled a beautiful sculpture of Emily Carr and her constant animal companions. Perhaps you'll come back to see it!

Delightful illustrations too. I am particularly fond of the styles used at the turn of the century. Great entry.

Beautiful selection of fall images, and the poem is delightful.

Congratulations for the wonderfull post. Thank you for sharing such beatifull paintings and pictures. Kisses and hugs.

I had never heard of it, a shame as a Canadian!

I'm not sure what it is about you, Vagabonde, but if it's not a smile it's a tear when I read your posts...because of the beauty, the charm, the organzational ability (as Deborah said) you have. Maybe it's also because I have met you and can picture you writing your posts. I love what you are able to compile in short order from all your travels. You really have a gift!

This coming weekend we will be in the North Georgia mountains from Friday - Monday. I will give Nicholas a hug from you. He will remember you! :)

Not sure if you're still reading or not but just wanted to let you know that Paris and the South West and South East of France were everything I expected, gorgeous weather, beautiful people and the trip of a lifetime. So much so that I really want to back (to Paris of course) and discover the north next time. Have a wonderful break.

Thank you so much for all the comments you've left on my blog - I'm quite overwhelmed! For me it's truly wonderful when something I've written or one of my pictures strikes a chord, and your comments are always eloquent. Thank you.
(I've dined out on your Clint Eastwood story recently, which was listened to with rapt attention!)
Caroline

Lovely Post---Both in words and in Pictures, too!
I have always found Fall a rather sad season---maybe because the leaves are dying and it's getting colder. These pictures capture a lot of the feeling that combines the Beauty of Fall and the sadness, too.
Hope you are having a good break, my dear.

Ruth, Deborah, DJan, Genie, Lakeviewer, dutchbaby, kyh, Margaret Bednar, DianeCA, Jeanie, Zuzana, Friko, Fennie, Pondside, Maggie, Elaine, Lele Batita, Zhu, Ginnie, Lonicera, Lady of the Hills and marciamayo - I did not bring my laptop during my break but read your messages in the hotel lobby in the evening. Thank you so much for your kind words, it was a joy reading them - I appreciate them very much.

Baino – I am so happy that you had a good time in France and that you were able to visit different areas. I’ll look forward to reading posts on your trip. Thanks for the visit to my blog.

Beautiful pictures! I just learned of Emily Carr a few years ago and was entranced with her work.

this is really strange><><>we must be about the same age cause in 1960 at the age of nineteen i went from utah to new york to paris france and of course fell in love with the country and a candian girl who i did not marry>>>i had a french motorbike{mobolette} and would go from where i lived to verdun, etain belgium, luxembourg, ><> a litter of gas would last me about 2 months and i only paid 25 cents for it>><>loved those days