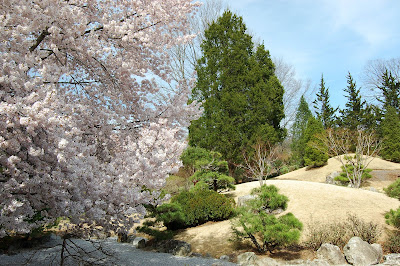 We went to Nashville to visit our daughter for several days. While there we decided to explore the Cheekwood Botanical Gardens. Christopher T. Cheeks and his wife moved to Nashville in 1880. Their cousin, Joel Cheek, developed a superior blend of coffee which was popular in the best hotel of Nashville, called the Maxwell House Hotel. This hotel had been built by Colonel John Overton and named for his wife Harriett Maxwell. The Cheek family was an investor in the coffee. In 1928, Postum (now called General Foods) purchased the Maxwell House coffee brand for more than $40 million. The Cheeks‘ investment had given them good return and they purchased 100 acres in West Nashville for a country estate. The estate, completed in 1932, included a 30,000 square foot Georgian-style mansion and extensive formal gardens which became Cheekwood. Cheekwood opened to the public in 1960. Cheekwood Gardens is a community leader in conservation and reclamation. They removed invasive exotic species and replaced them with many native plant colonies.

Map of Cheekwood gardens from my brochure

In Nashville they call the estate “the house that coffee built.” The 55-acre garden (220,000 m2) has great horticultural diversity. There are 10 specialty display gardens. The mansion can be visited too but we did not. This will be for a future visit. When we arrived and parked in Parking Lot B, in the center of the map above, we saw a great number of people with dogs. This was the “Cover Dog Search” sponsored by the Nashville Lifestyles magazine. The winning entry will be featured on the cover of the May issue of the magazine. 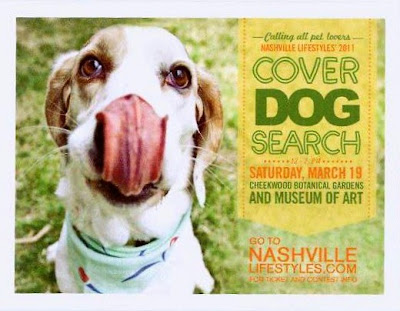 There was a long line of dog owners with their pets. So many dogs! tiny to huge, all different breeds and colors. 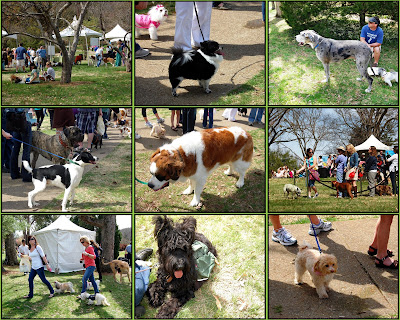 Click on collage then click on each picture to enlarge
When they reached the top of the line a photographer would take the picture of the dog, with its number. The magazine readers can vote online for their favorite dog (you can look at the dogs here– my favorite is no. 175.) 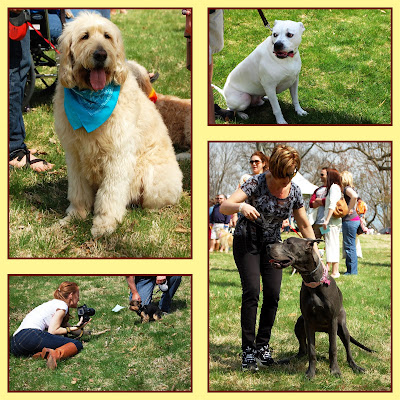 We left the crowd and walked toward the reflecting pool. 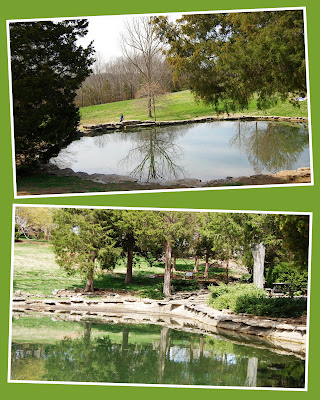 From there we could hear many frogs croaking. We walked down to this frog pond to see if we could watch the frogs. 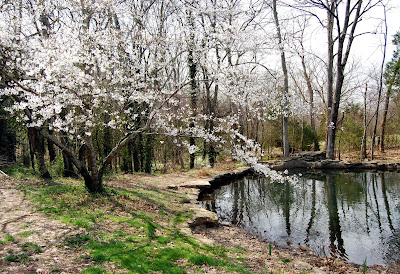 My! I have never seen so many frogs – swimming, croaking and courting. 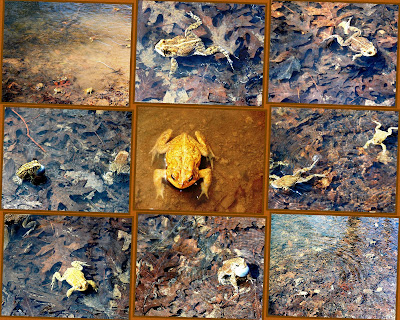 One frog jumped near my husband and he caught it for a little while so our grandsons could look at it closer – they were fascinated. 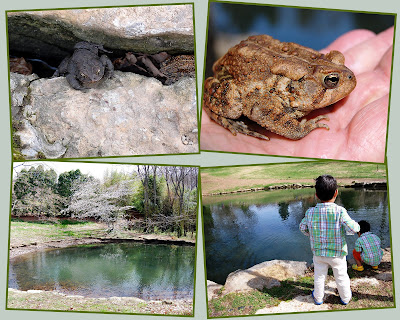 Then the little boys ran up a meadow to look at the lions which we could barely see on top of the hill. 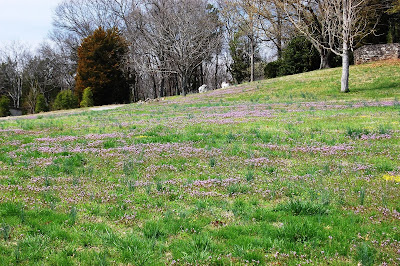 The lions were looking toward the mansion – keeping an eye on it I guess. 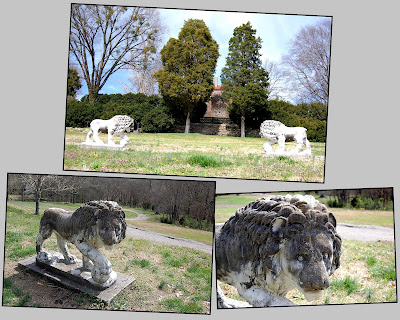 The meadow was covered with tiny wild flowers; daffodils and narcissi could be seen here and there. 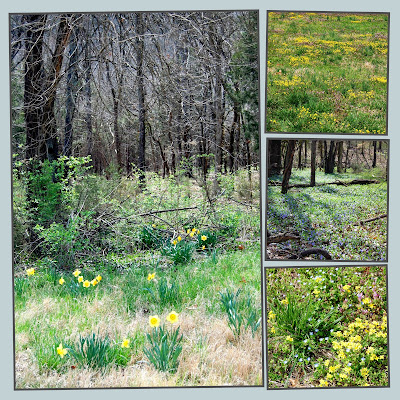 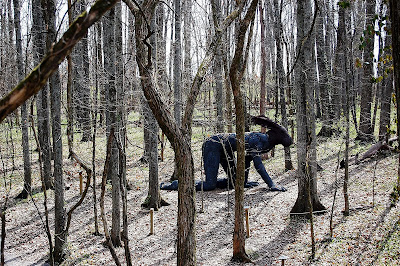 Actually this is a sculpture called “Crawling Lady Hare” by Doug Hollis. The brochure says “We may expect art to show what is real – but who is to say our visions and dreams are not?” This artwork is part of the Carell Woodland Sculpture Trail. But we were walking toward the Japanese Garden, so I’ll follow this trail another day. 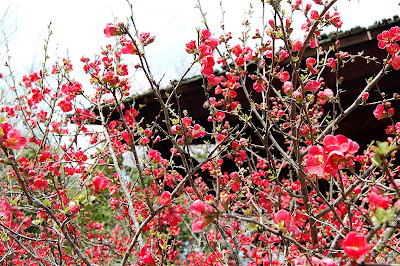 The Japanese Garden was peaceful and lovely – such a soothing place. I could have stayed there a long time. 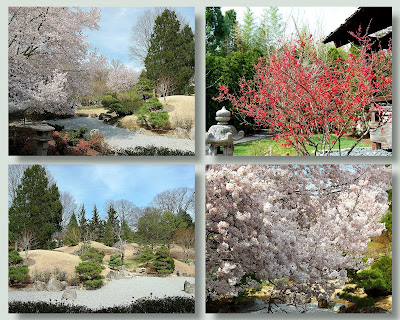 It was a very warm afternoon – 85 degrees (29 -1/2 C) but not humid. Everywhere I looked was another photograph begging to be taken – and I did – now it is hard to decide which ones I should show here. Ahead were many beautiful magnolias. By the way, the magnolia has about 210 species and it was named after French botanist Pierre Magnol (1638-1715.) Pierre was born in Montpellier, a city in the south of France. His father was a pharmacist and his mother came from a family of physicians. Pierre enrolled at the old University of Montpellier (founded in 1289) where a botanic garden had been established in 1593 by King Henry IV of France. Magnol invented the concept of plant “families.” He wrote several treatises allowing rapid plant identification. Up to then it was believed that all species had arrived on earth by “divine creation.” 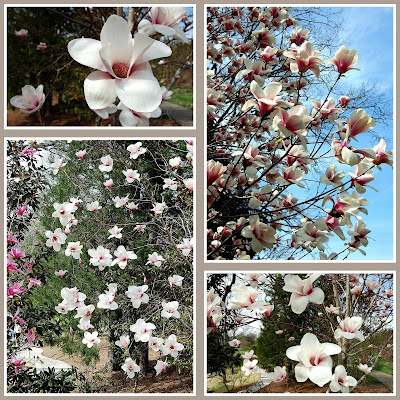 Our grandsons had run ahead toward the colorful pansy beds. I took their picture, then, a little girl stood in front of me and asked if I would take her photo, too. I was pleased to oblige. Her name was Katy – see her below. 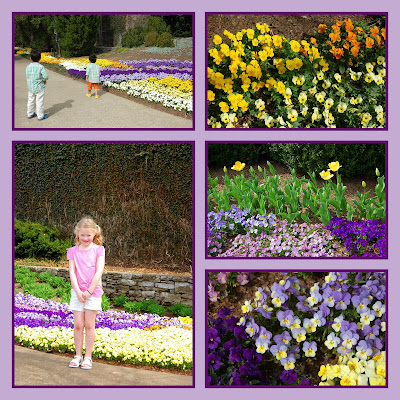 These pansies were very small but so pretty. There were other flowers and flowering bushes too. 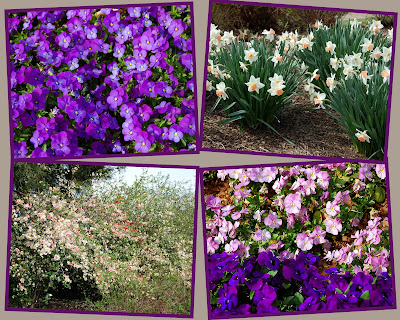 A couple of sphinxes were at the end of the pansies walkway. 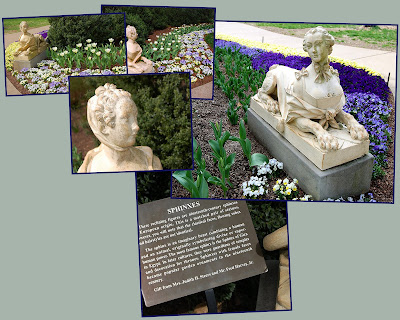 Ahead were more varieties of magnolias. Some of their names were: Jon Jon, Ann May, Western Lily, Saucer, Elizabeth. 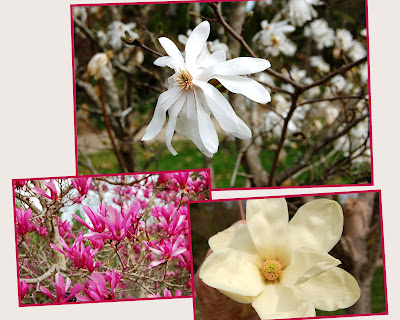 Some had great fragrances. 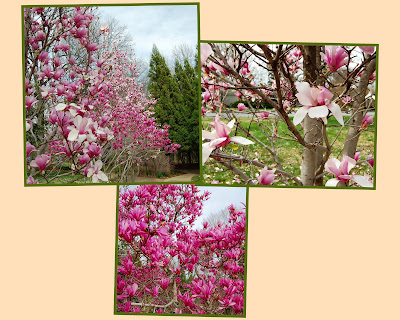 There were some inviting stairs, going… where? No, my knees would not make it back. 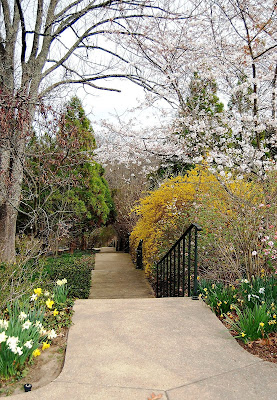 The grandsons had found a fountain and were studying its contents. 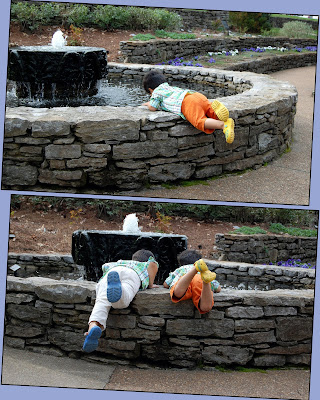 Further on there was an herb garden. 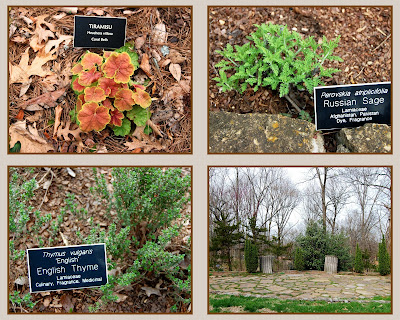 Upon entering the Visitor Center we were greeted by large indoor plants and a lovely sculpture of 3 children. 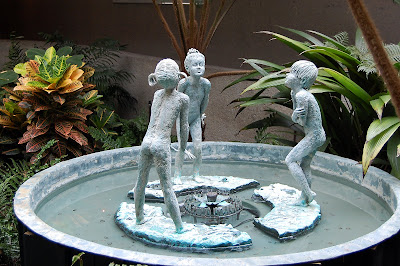 There was an Orchid Show in the adjoining hall and it was a lovely display. 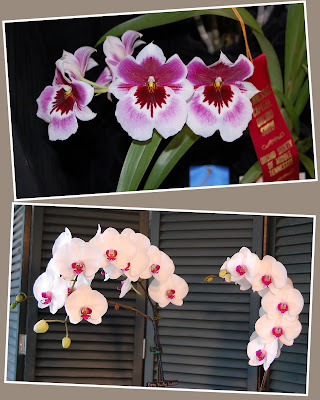 In summer they also have “Live at Cheekwood Gardens.” Last July Joan Baez gave a concert there. 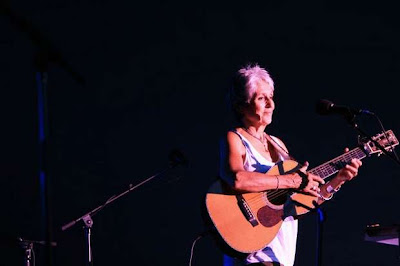 There was so much more to see at Cheekwood Gardens and Museum of Art – I’d love to visit the mansion and look at the many paintings, drawings and sculptures in the museum. That will be for another time. The gardens were amazing though, and I did not see them all. 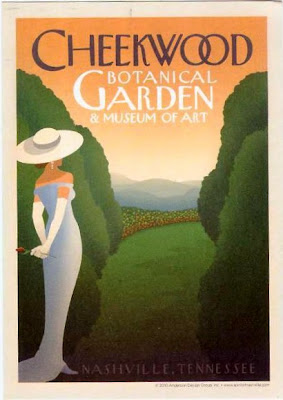 So many beautiful flowers! And I took the time to look at all the dogs at the show, some made me laugh, but everyone seemed to be having a good time, including you with the grands.

Wonderful array of pictures, I am surfeited with such a profusion of them! Thank you!!

Dog 156. How fun. I had no idea there were that many magnolias. I will have to study up as I want to plant one in our yard. Your grandsons certainly are curious little guys!

What an absolutely gorgeous place. Thank you very much for sharing it with us. It looks huge and so much to see! I wish I was there to see all those exquisite flowers AND to hear Joan Baez. I was always a fan of hers. Happy spring!

What a beautiful place. It looks like such a wonderful day...your grandsons seemed to really enjoy it, too! Thanks for sharing it.

What an exquisite garden! I can see you could easily spend a week there and still not see everything. Thanks for sharing this beautiful springtime stroll with us.

thank you so much for sharing these beautiful gardens! What a wonderful place to visit.

Oh, my! That sounds like a place worth spending a week in visiting. Love the wild meadows with the flowering bulbs.

You have such an ability to seek out and enjoy and document the most BEAUTIFUL places---Places that Honor Nature in all it's magnificent gorgeousness---And your pictures are FANTASTIC! Each one, a Gem!!! I love that you "see" these things---Really SEE them, and then share what you have seen ih such a creative and eloguent way.

Forgive me for not coming by---I am really going through hard times and trying to be there for my dear dear friends family, as best I can. And just trying to wade through all these complicated sad and happy feelings that come with such a profound loss....I hope you understand.

How interesting to learn where the word magnolia comes from... and what lovely pictures. Yet another place to put on my wish list.
Caroline

What a beautiful place! The Japanese Garden is gorgeous and your grandsons are so cute! Merci beaucoup for the lovely tour! Cheers and Happy Spring, cher!

What a gorgeous place. It was very interesting to learn how Maxwell (good to the last drop!) House coffee came to be. There seem to be so many interesting places to visit in the Nashville area.

This is the time to be in Nashville, or Atlanta. I am glad to see spring somewhere. It is very cold here now (19F). I didn't know about Magnol, but I am accustomed to learning about origins from you, so I am happy to do so here. What a contribution he made. I think you must have given some thoughts to the suffering people in Japan when you were in the Japanese garden. Their lifestyle stays with them, even in the crisis, such grace.

It looks like you were at the Joan Baez concert. I admire her a lot. We keep needing voices of peace and hope, more than ever.

Wonderful post, wonderful blog... I too love to travel... Accidently stumbled here and loved it... The pics that you put up are superb... Looks like a wonderful place, the dogs, the flowers, the lions, the pond....
Wow! It does seem like a great place...
Have a lovely day:-)

Oh, Vagabonde, this is simply gorgeous. Here is nippy Michigan where it might have made it to 32 yesterday (at least the sun was out), it feels as though spring will never come. An isolated day here or there, yes. But nothing so warm as to bring this stunning array of blooms! I can see why as a photographer you were a bit at a loss -- it's a good thing memory cards hold a lot! And so many winners here, too!

Loved the dogp pics, but I'm thinking my favorite was of your grandson leaning into the fountain. Such a real, genuine moment!

What beautiful gardens and you must have had a lovely day out. I like the narrative about Maxwell House and that's a good story to think about when having a cup of instant. For some reason the frogs stick in my memory, rather than the flowers, which are beautiful but expected. Ditto the dogs, whereas the frogs and that rather ghostly (and ghastly) statue of Mother Hare are unexpected and so give us a little frisson from which we can then take comfort by looking at the magnolias and drinking a coffee.

DJan Margaret, Kay, Marciamayo, alwaysinthebackrow, Elaine, Ann, Vicki Lane, Lady of the Hills, Lonicera, Marguerite, Pondside, Ruth, Arti, Jeanie and Fennie – I am pleased that you enjoyed my posts. Thank you for your kind words and visit.

Looks huge! I love the Japanese garden, it's lovely and looks relaxing. Not sure I'd hang out in the dog park... I like dogs but they can go a bit wild with their peers sometimes!

Bonjour! Thank you for visiting my blog.
Actually, I'm an american and do not live in Paris {I wish!}.
The photo on my blog was taken from an apartment that we rented at the corner of St Dominique and Rapp, in the 7th arrond.
I hope the weather is beautiful when you visit. Springtime is lovely as the flowers are blooming.
Wishing you a lovely week ~
xoxo, B

You have a daughter in Nashville and I have a son! Cheekwood is a jewel of a place. Lovely pictures. You make the most out of your trips and we all benefit from it.