Blog Intermission no. 13 (entr’acte) – Under the Bridges of Paris 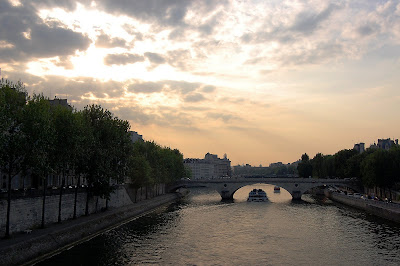 The above picture was taken on the 4th of May 2011 – over two month ago already. Every time I have been to Paris, even just for a few days to visit my family, I have somehow found myself near the Seine in Paris. I love to watch the river from all the Paris bridges – well I don’t visit them all as there are 32 bridges over the river Seine in Paris. The Seine and its bridges has been the subject of numerous paintings by French artists as the one below 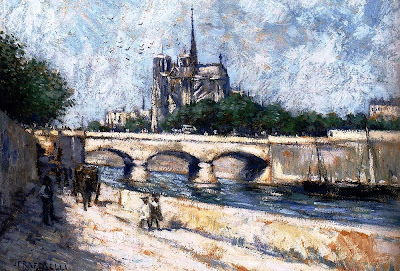 and International painters, as the American below 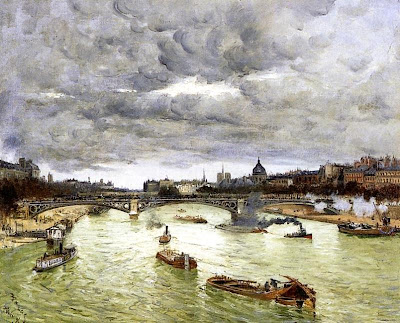 The Seine and Bridge of the Carousel, Frank Myers Boggs, American 1855-1926

and the Italian below. 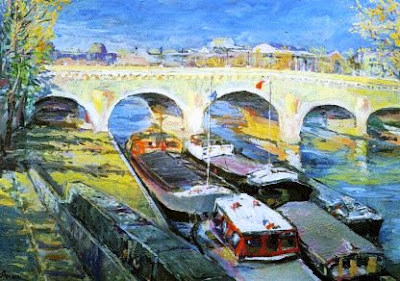 Under the Bridges of Paris, Giancarlo Amurri, Italian born in 1929

The Paris bridges have also inspired talented photographers such as Brassaï from Hungary (1899-1984) as shown below by his two dramatic photographs of the Pont Neuf, taken in 1932. 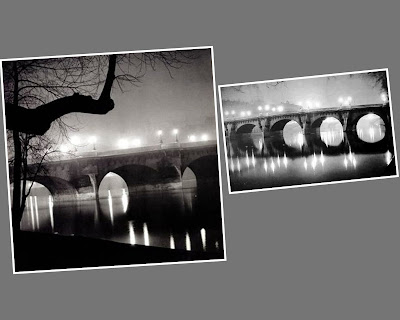 Song writers have also been inspired by the Seine and its bridges. One of these songs called “Sous les Ponts de Paris” was very popular when I was growing up. 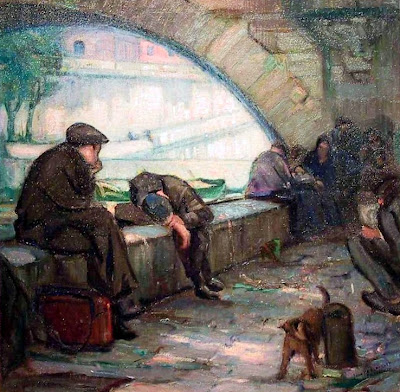 It was recorded both in French and English by the American singer Eartha Kitt. 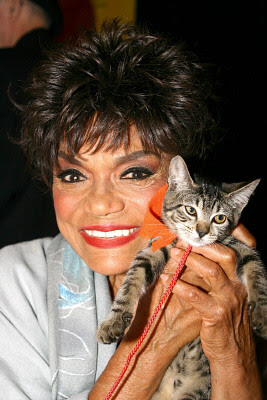 Eartha Kitt was a versatile star who distinguished herself in cabaret, music, television, theater and films. She performed in over 100 countries and sang in ten different languages. In the television series “Batman” of the 1960s she was a “Catwoman.” Her kitten “growl” became her trademark. Here she is singing Sous les Ponts de Paris – Under the Paris Bridges - (the lyrics are afterwards.)

My darling why I sing this song
Is easy to explain.
It tells what happens all along
The bridges of the Seine.

The vagabonds go there at night
To sleep all their troubles away,
But when the moon is shining bright
My heart wants to sing it this way.

Sous les ponts de Paris
Lorsque descends la nuit
Under the bridges of Paris with you
I'd make your dreams come true. 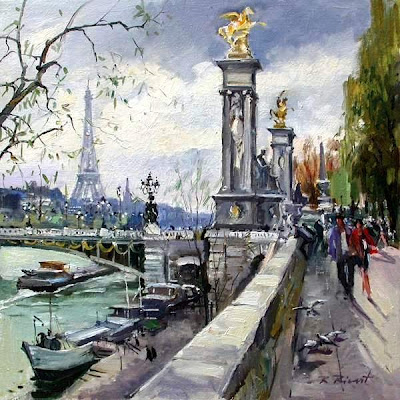 
It would be nice to be near the bridges of Paris right now. It would be even nicer to be there next Thursday, on the 14th of July, (for the National Holiday, called Bastille Day in anglophone countries) when fireworks can be seen near the Eiffel Tower and reflected in the Seine. 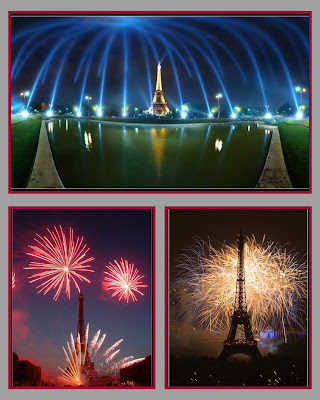 I'd love to visit every one of the 30+ bridges over the Seine.
There's something mesmerizing about the view of a river from a bridge - the current, the eddies, the clouds reflected in the dark water....

I've been lucky enough to visit Paris a couple of times but never realised there were so many bridges (or that they were so pretty) - now I have one more reason to go back! Love your photo, the light is lovely.

Oh yes, Bastille Day is coming up! Very exciting!
I remember Eartha Kitt. How she loved French songs, and sang them wonderfully well.
I didn't realize there were so many bridges, either. My husband says we have to go back to Paris, so maybe I'll get a chance to count them!
Thank you!
— K

Gorgeous pictures and paintings. I love Paris and last time I was there we made a boat trip on the Seine. The Eiffel tower created a light show and it was like a fairy tale.

Beautiful post Vagabonde! I'll be crossing the channel to France on Bastille Day -- but unfortunately not to Paris -- it's via Rouen and Chartres to the Lot.

Loved this post Vagabonde. I agree with you. The Seine river and Paris bridges are the place to be in the French capital, especially in the summer. In Spain for a few more days right now. No river or bridges where we are, just the Big Blue, and that's is pretty special too ;-) A bientot, Veronique (French Girl in Seattle)

For someone who has never been to Paris, your lovely post has created the illusion in my mind, of having been there. Loved the collection of paintings and the 'Sous les Ponts de Paris' video and lyrics. Visiting Paris is on my granddaughter's wish list!

This post has made me yearn for a visit to Paris! Thank you for this reminder of that uniquely lovely city.

Oh, I loved this so much! We were in Paris a year ago for a very short visit. My first. I must go back.

gorgeous photos.
wonderful paintings.
enjoyed the video so very much.
thank you for sharing these visits of Paris..i feel like I've been able to visit this beautiful city through your post. One day I hope to see it in person.
thank you !! :)

We did love Paris when we went such a long time ago and this post really brought back lovely memories. Thank you. Eartha Kitt was such a wonderful singer.

Love this post - what beautiful artwork and I do love the vocal stylings of the fabulous Eartha Kitt! Would love to spend time perusing all the bridges of Paris & how nice it would be to be there on Bastille Day **sigh** - thanks for sharing!

Sister Ruth has a special claim on Pont Neuf, but I'll let her speak to that. I hear Eartha Kitt singing right now in the background and she's reminding me of Édith Piaf, The Little Sparrow. There's nothing more romantic than someone singing in French! :)

Such memories that evokes. Le Pont Alexandre I remember as the most ornate one, Le Pont Royale the nearest to our small hotel and Le Pont Neuf, where I had a tryst and couldn't find the steps leading down to a little island we had spotted on a map. Fortunately there was a plan B.

Thanks for a nice share you have given to us with such an large collection of information. Great work you have done by sharing them to all. simply superb. Photo Recovery

Aww memories of the bridges in Paris. Thanks for that one. My cousin met Eartha Kitt once and said she was a hoot!

I like all the paintinga, but particularly the very last one---The 'contemporary'......Ertha Kitt has always had that strange fast Vibratto to her voice, but Oh, what a Performer!!!! It must have been good to be in Paris, once again, my dear....!

Le Pont de Mirabeau, I believe it's the best place to watch the fireworks. There is a good chance that I will be there Thursday! (Sorry, if I make you a bit jealeous.)

Beautiful bridges of Paris, it must be hard for you to be away from 'home' on the 14th.

This is Belgium said...

I never forget how I felt when I saw the bridges of Paris for the first time, so this to me is a lot of fun, the photos of Brassaï are my favorite ..
Love the songs. Glad to meet Ms Kitt, I did not know her.
By the way, I walked in Anderlecht by a café called "Beguinage" and took a picture. If I find it right away I will post it tonight with a reference to your blog.

Yes, I would love to be on a boat going under the bridges of Paris too! In fact, I took a tour boat on the Seine when I was in paris with my sons in 2005..... beautiful!

It's no wonder the Seine and its bridges have been such a popular subject with artists, it's so beautiful! You're really making me want to go to Paris to see all of its beauty for myself:-) I knew who Eartha Kitt was but I didn't know she knew how to sing in French!! I thoroughly enjoyed the video. xoxo

Catching up after my vacation and the first post of yours I stumble upon is of Paris. I smile, sit back and revel in the wonderful images you chose to highlight the beautiful Seine! Thank you for taking me there!

Beautiful pictures Vagabondem Thank you. I remember when Eartha Kitt made her first New York appearance in "New Faces."

I have been to Paris decades ago. Elegant images of Paris came back to me very vividly! Oh, I missed a lovely cruising. I didn't take a boat going under the bridges・・・. Reading your blog, I understand very well how deeply and why, you and people love the Seine and its bridges which are the condensed and most important symbol of Paris and your country. Vagabonde, thanks a lot for taking me to your wonderful trip. Have a great day!

I have always loved Eartha Kitt. Thanks for another great post!

I have actually slept under one of these bridges, though I can't tell you which. It was something I felt I ought to do as a young romantic of 18.
Cold and uncomfortable and olfactorily challenged, it was too.

I would love to walk across a few bridges along the Seine!

I loved the artowrks, especially "The Seine and Bridge Alexandre III"

I will answer your questions about Brooklyn in a e-mail--enjoy your blog intermission!

all these paintings!
wonderful
and I love the B&W photos

As usual, this is a beautiful post about one of my favorite cities.

I am late so am able to wish you a Happy Bastille Day on this 14 of July.

Just wanted you to know dear that you are the winner of my guessing game - 'cruise to where?' Make sure you read the recent post and then send me an e-mail with your mailing address please.

I'm not one to revisit the same place twice but Paris will be an exception. I was a late bloomer and only went in September last year, I love looking at the bridges upon which we drank rose and ate Apero. Those drunks are still there by the way.

ahhhhh, i was 19 in paree><<>looking to be in love, but certainly in love with the louve and the seine, and the bridges and the sidewalks and the cafes, and the e tower{ what views}, i lived for paris{lived in verdun} and 2 hrs. away and i was there<><>there and luxembourg were always on my mind and i think it was the bridges in both and the water><<><>ahhh and later you french girls<>,.nothing like the frence girls