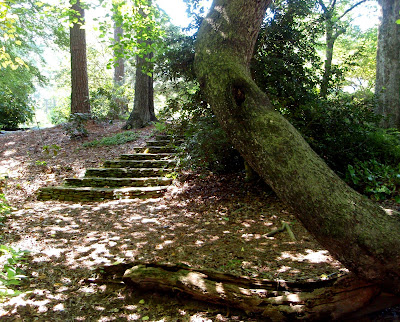 About one month ago when I had my routine dental cleaning, my hygienist told me she was volunteering at a local garden and gave me its name. I have visited many gardens - have driven hours to visit some in Georgia and visited several in other states, like the Rose Gardens in Portland, Oregon and Columbus, Ohio, gardens in California, New York, Florida and other countries like the Butchart Gardens in Canada, the Orchid Gardens in Singapore, the Royal Botanic Garden in Kew, England, Le Jardin des Plantes in Paris, France, etc. When I used Google Map to find the name of the garden my hygienist had given me I was quite amazed, as it was only 4.5 miles from my home (7.25 kms) – and I had never heard of it! This certainly had been a secret from me. 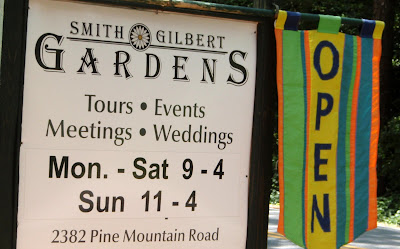 Last Monday my husband and I drove to this garden, the Smith-Gilbert Gardens. We drove to the house to pay for our admission – we were the first visitors there that day. In 1995 the house was listed on the National Register of Historic Places – it is a Georgian Cottage with Greek revival and Italianate detailing. Originally this was Cherokee Indian land. When the Cherokee were driven away from Georgia and into Oklahoma in 1832, the area was parceled out through a Land Lottery. These 3,000 acres of land were at first a cotton plantation. Then in 1880 Hiram Butler, a prominent railroad man, bought 160 acres and started building a home there. It was built of solid brick with 12” thick walls. Below is a picture of Hiram Anderson Butler and the house. (Click on any picture or collage to enlarge and click again on individual pictures to enlarge again.) 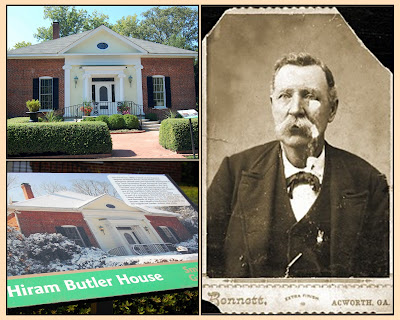 The Butler family sold the property in 1913 and after being sold several more times the house and 16 acres of land were purchased in 1970 by Richard Smith and Robert Gilbert. Mr. Smith, an accountant, and Dr. Gilbert, a periodontist, worked in Atlanta and spent the first five years restoring the house. During their 35 years of ownership Richard Smith and Dr. Gilbert developed the land into extensive gardens with a vast collection of exotic plants. Being avid art collectors Smith and Gilbert also acquired contemporary sculptures during their travels. The sculptures are carefully placed throughout the landscape. Below is a painting of Richard Smith and Robert Gilbert in the back of the house. 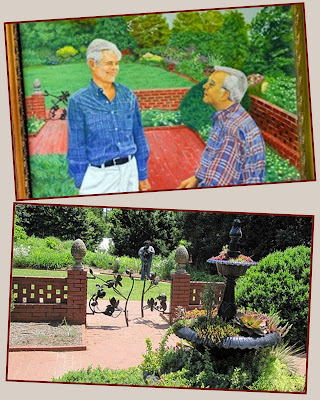 Richard Smith and Dr. Bob (as Dr. Gilbert is called) realized early on that their garden was on a bird annual migratory path. They began planting fruiting trees and shrubs in the hope of attracting more birds. Over 120 bird species have now been identified on the property where they enjoy the woodland setting. Because of this unique bird and wildlife habitat the garden is a designated Wildlife Sanctuary. This early interest in birds drove Gilbert and Smith to expand the gardens to include all the exotic plants and sculpture in the beautiful gardens we were visiting that morning. 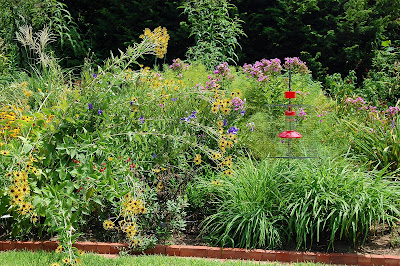 The temperature was not in the 80's yet (27 C) and the humidity was low – about 30%, so it was pleasant walking the paths in the garden. The sun was bright and glimmered among the trees creating gray shadows but making it a bit hard to take good pictures. With the garden brochure and map in hand we started our exploration.

The brochure states “Welcome to one of North Georgia’s hidden gems, Smith-Gilbert Gardens. As an established collectors garden, we have over 3,000 species of plants, many unique to American gardens. Having grown through the years, the Gardens stand out as an exceptional blend of art, history and horticultural, all creating a tranquil respite of reflection and enjoyment. Enjoy the highlight of 30 sculptures carefully positioned among plant species, all surrounding the historic (ca. 1882) Hiram Butler house.” We started the exploration with the Conifer Garden. 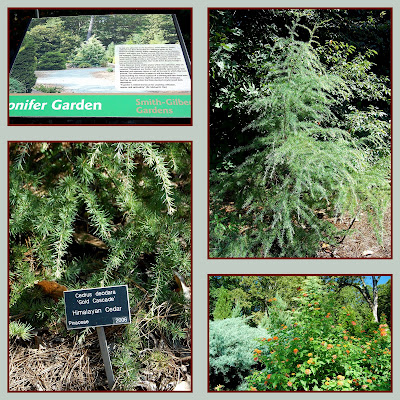 The marker says that the collection here has been designated as a "reference garden" by the American Conifer Society. Over 200 conifer varieties have been gathered by the founders and have been labeled with their botanical and common names and the year they were planted. 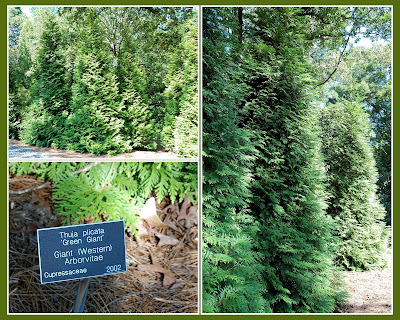 Here is a shrub which is well named – don’t its leaves look like parsley? 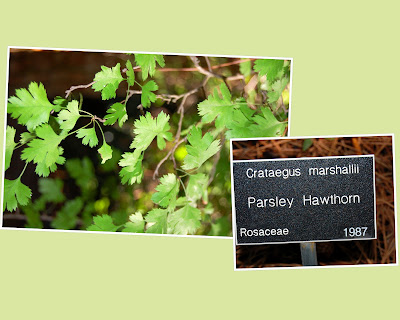 Walking on the shady path we passed several beautiful plants including lovely species of Hosta – the Georgia Hosta Society has designated it a “display garden” and it was hard not to touch their rounded leaves, shown in the center right of the collage below. 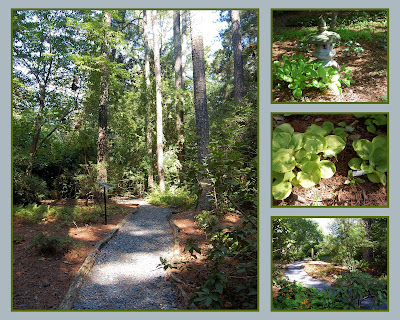 Turning around the path we saw a mulberry tree with an unusual bent. 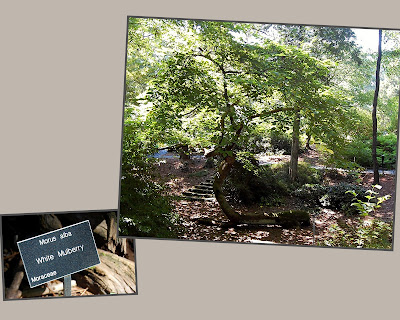 Stepping down to the other side of the small hill I came close to the sculpture named “Respite” (1980) by Frank Creech, a Florida artist. I wonder if it does not represent Gilbert and Smith taking a rest in their gardens. 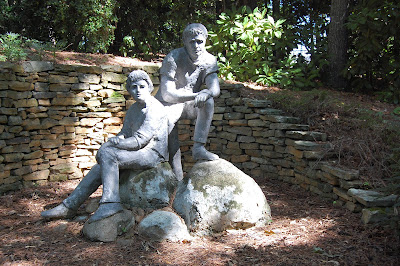 It is very easy to rest in these gardens as many benches are placed so one can sit, listen and contemplate the beauty of nature while listening to the song of the birds. 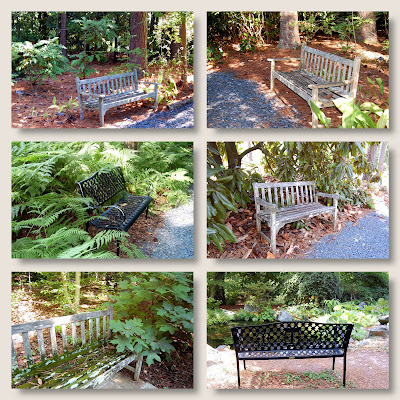 We arrived at a large open space with a piece called “Untitled” (1984) by Atlanta sculptor Edward Chrisman. On the other side of the grassy expense stood a tall Eastern Cedar where my husband went to sit in its shade. I went closer to the rose garden to admire and take picture of the colorful roses. 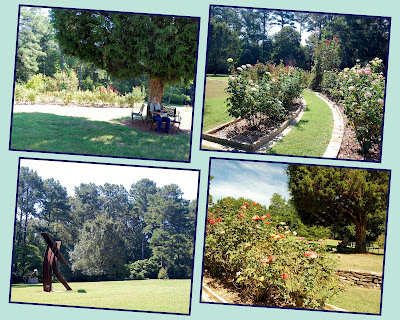 So many roses … with lovely colors and fragrances … some light pink 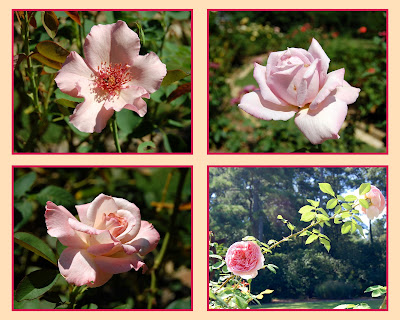 some a darker shade of pink, almost fuchsia 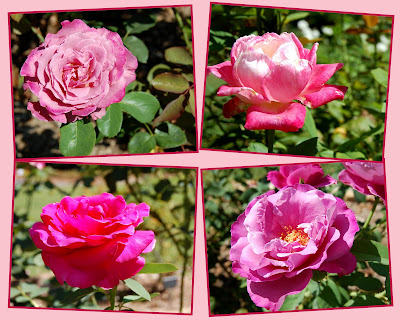 some pale yellow and coral - all the way to vibrant red 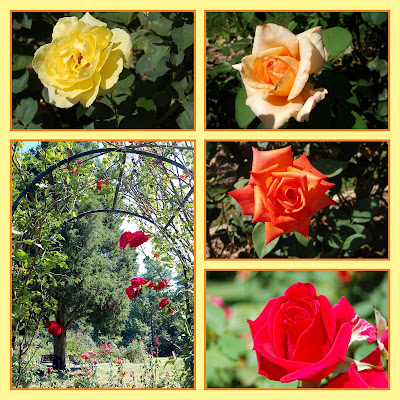 some alone and some in bouquet 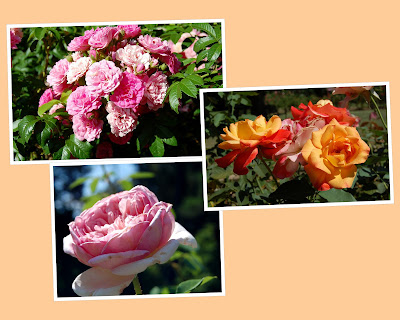 then finally some roses fresh, just opened and some almost faded. 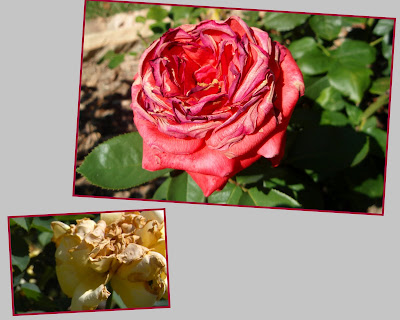 This reminds me of a saying my mother used to say:

[Flowers that are fading - heart that is braking, Faded flowers – heart loved.] 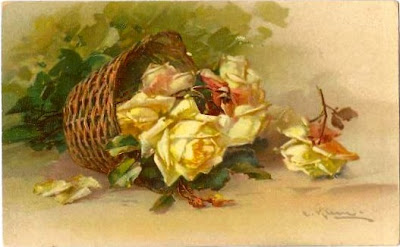 Vintage postcard of roses – sent in 1909 to Bernice in Maine

What a marvelous secret garden you have discovered. It looks quite varied and extensive, so I can well imagine that lots of volunteers must be involved in maintaining its beauty.

You and your husband were wise to have an early start on your tour. I can imagine that August in Georgia must definitely be on the warm side. I remember Virginia summers!

I've read about this one but haven't been. Your post reminds me to put this one on my Saturday adventures. Just beautiful and I'm sure you enjoyed a cool stroll in the shade of the trees.

what a lovely time you had. such a beautiful place to visit. I so enjoyed the photos..thank you so much for sharing this trip!
My paternal grandmother lived in North Georgia MANY years ago..her husband worked for the railroad and she wanted to be close by. My father could ride for a small amt..I believe it was 25 cents..anywhere the train went!! As a young man he saw many places!! My grandmother was quite adept at using a shotgun,since she spent a lot of time alone there..this was before my father was born in 1919. she'd go outside and "practice" shooting cans/bottles off a faraway fence..the neighborhood/town was very aware of Miss Emma's sharpshooting skills!!

What a labor of love! I have tried to build something similar on my 1/4 acre! LOL!

This is certainly a beautiful garden - no longer a 'secret' as many people will want to visit!

My favorite is Butchart on Vancouver Island - such an awesome place - and of course Kew and Wisley in England. I would love to visit more around the world, big or small, I really appreciate all the hard work which goes into gardens.

Back from California and trying to get my own little 1/4 acre in shape again - it became a jungle whilst I was gone!

Lucky you to have such a beautiful garden so nearby -- you can get to know it in all seasons! Thank you for the tour and the wonderful pictures!

Beautiful flowers! How is this garden funded? It must take a lot of work to keep it up, and if it is secret, and you had not heard of it, there must not be a lot of visitors to pay the admission fee. Great find. I guess getting your teeth done paid off!

What a beautiful garden and so lucky you found it. A wonderful outing for the day.

How lovely to find a place close to home that has so much interest and beauty. Sounds like it was a good day out. It would be interesting to see it at different times of the year. Diane

Those things we find in our backyard, Vagabonde, are sometimes the best! I'm amazed you had never heard of this garden, being so close to it and knowing how you research everything. Of course, I've never heard of it either, though from Atlanta for so many years.

I especially love all the benches. The two men got it right and clearly have had fun and success in setting up this well-kept secret.

How lovely and so nice that it's close to your home. It would be nice to visit during different times of the year.
Sam

Such a lovely garden. I love Descanso gardens in La Cañada Flintridge near Pasadena. It reminds me of being in Europe and not at all in Southern California.
You would love the gorgeous gardens and parks in Japan.

Those steps are begging to be climbed. What a wonderful treasure to have on your doorstep after all the distant gardens you've visited. I don't expect that will be your last visit.

How wonderful to find such a beautiful garden so close to your home! I'm sure it will becoem a favorite place for you to vsiit through all the seasons. The roses are all magnificent!

Ahhhh...I love that these two men had a vision and had the means and created such a fantastic garden.....It is exactly the kind of thing we need more of, EVERYWHERE......A lovely hidden gem! Beautiful pictures of very beautiful plants, my dear....And the Roses....SUPERRB!!! I look forward to the next part......!

Gardens always fascinate me. I know little about it, but, as a visitor, I always enjoy and appreciate every detail. Thank you for this post.

How exciting to find such a lovely garden so close to your home! It is so beautiful and I enjoyed strolling through it with you very much.

I noticed the connection between the periodontist and your dental technician. :-)

It is such a fine thing to create a sanctuary like this for the public, and for scientists too. So good that you had a cool time to visit, and places to rest (I'm always looking for those).

Thank you for your birthday wishes and kind words about my brother and me.

Congratulations on seeking out this hidden treasure.

Though I love all the fancy modern roses, my favorite is still the original five-petal roses where you can see the hundreds of stamens like the very first rose you show here.

What a magical place you share with us! I hope it's not too secret, but just secret enough! It's beautiful -- and my, that Respite statue -- and those beautiful benches are perfect!

Frances, Jojo, Ann, Divine Theatre, Mary, Vicki Lane, alwaysinthebackrow, Riet, Food Fun and Life in the Charente, Ginnie, Sam@my Carolina Kitchen, Nadege, Pat, Pat@ Mille Fiori Favoriti, Old Lady of the Hills,Olga, Elaine, Ruth, Dutch Baby and Jeanie - I am pleased your enjoyed the small garden near my home. It is truly a lovely place. I have many pictures to show you and hope you will come back to see them. Thanks for stopping by.