From the end of the Jubilee Celebration to the Delta Queen 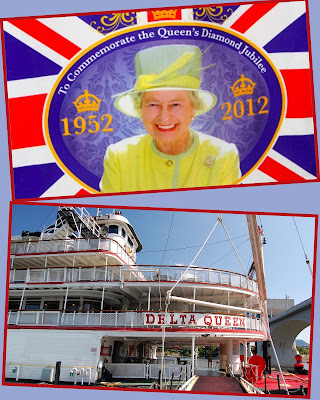 While I was writing my post of May 5, 2012, “Cruising on the Lower Mississippi River in New Orleans” (click here to read it) I found out that the historic Delta Queen steamboat is now docked in Chattanooga, in Eastern Tennessee, about 2 hours from our home. The Delta Queen does not cruise the Tennessee River. It is now a floating hotel. I also found out that they have a promotion called “Staycation” - if you stay two nights you get the third night free – this includes a full English breakfast. We made reservations for a stay starting on Tuesday 5th June. Early that morning we were ready to go but it was raining very hard. We decided to wait till the rain slowed down. I went back on my computer and followed more of the Jubilee celebrations which I had not seen since the Flotilla festival. Cody, our cat, came and decided to get comfy next to the computer. (Click on collage then pictures to enlarge.) 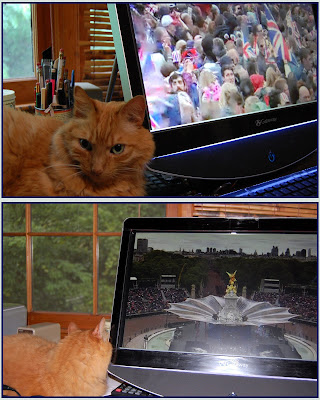 As I started watching, the images shown on the computer were of the House Cavalry on their horses, the Foot Guards marching and other regimental bands. 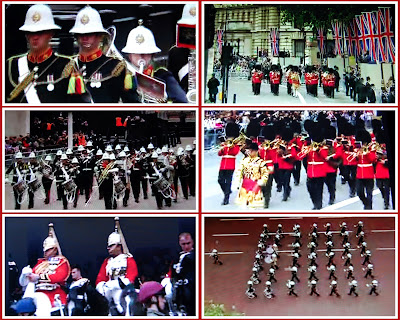 It was not raining in London then but it was continuing to pour here. I took many pictures of the conclusion of the Jubilee until our rain finally stopped and we could leave. The stream of pictures from my computer was not accompanied by any commentary (which may have been a mercy) so I had to guess at what was happening. It seemed that Queen Elizabeth was leaving St Paul’s Cathedral and being driven to a luncheon at Mansion House ending with a performance by a Youth Orchestra and Choir. 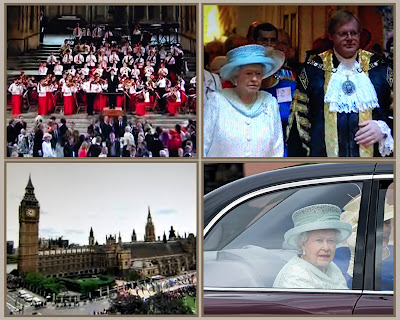 There certainly were many guests at that luncheon. 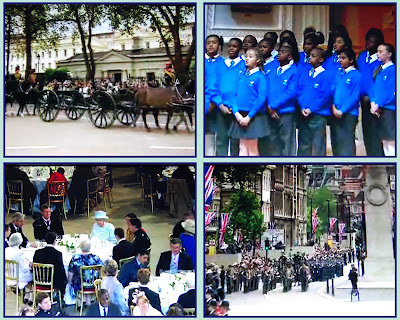 More images of the regiments were shown during the length of the luncheon. 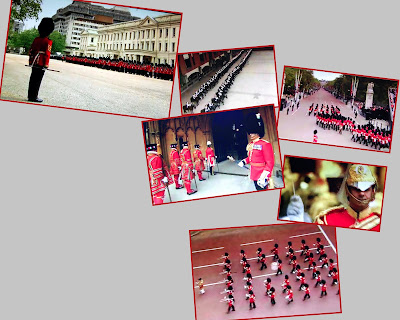 The Queen then stepped into her 1902 State Landau followed by the Prince of Wales and the Duchess of Cornwall. It looked like this open-topped horse drawn carriage went up Whitehall to Trafalgar Square. It then went through Admiralty Arch, along the Mall and entered Buckingham Palace through the Center Gates. Another carriage carrying her grandchildren the Duke and Duchess of Cambridge and Prince Henry of Wales was also in the Diamond Jubilee Procession. 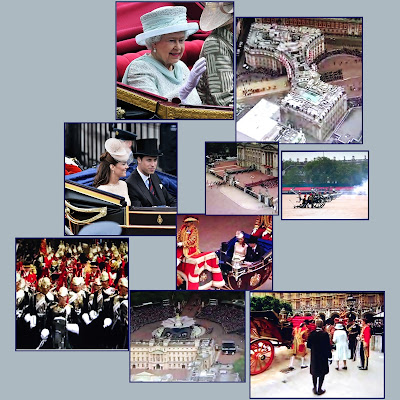 During the Carriage Procession the King’s Troop fired a 60 gun salute. More images were shown of military servicemen and military bands. The crowd was immense. A Guard of Honor was waiting in the Forecourt of Buckingham Palace. These guards with their scarlet tunics, navy collars, shoulder straps and tall black fur hats really look like toy soldiers – they are cute if you can ever call a soldier cute… I cannot visualize them in a war. 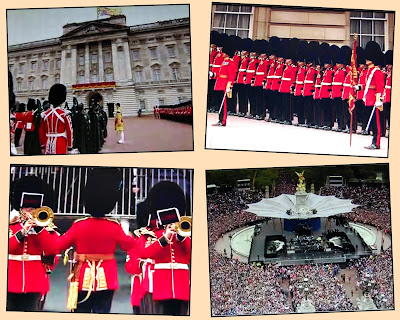 The Queen stepped down from her carriage and as she entered Buckingham Palace, a member of her household gave her a bouquet of flowers. The Queen and members of her family appeared on the balcony. Unfortunately her ailing husband was not at her side. The crowd waving red, white and blue Union Jacks cheered. 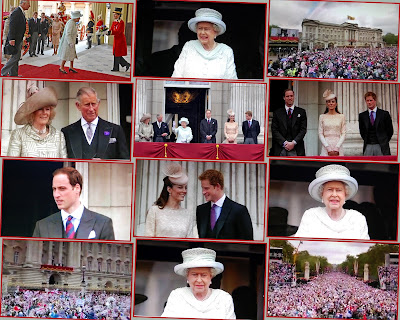 The royal party then looked up as a fly-past made of vintage aircraft - Hurricane, Lancaster and Spitfire airplanes – appeared above flying in formation. They flew over the palace trailing red, white and blue smoke. 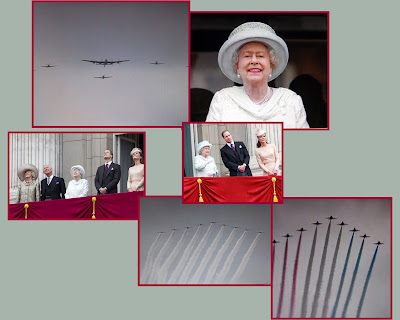 The Foot Guards executed additional maneuvers in good coordination. They went on with the Feu de Joie and ended with three “Hip, hip hooray” and throwing their hats in the air. Their hats are 18 inches tall (45.7 cm) and made from real bear skin from Canadian brown hears – each weighs 1.5 pounds. I read that the British Army has been trying to find synthetic alternatives to bearskin with no result. 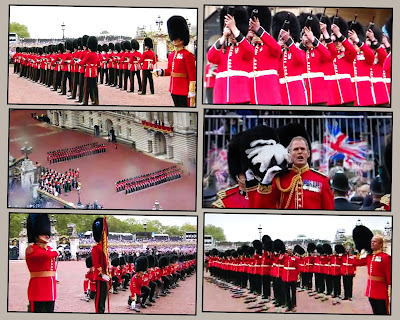 Queen Elizabeth smiled (first time I really saw her having a genuine smile) and waved again. It was over – she turned around and the party left the balcony. 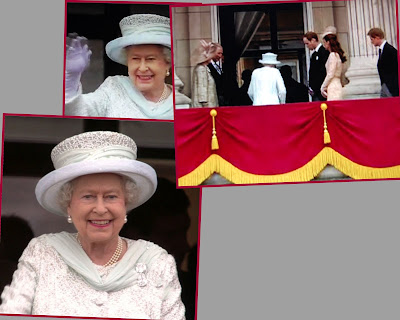 The rain here had finally stopped so we gathered our things and departed for Eastern Tennessee. When we arrived in Chattanooga we got lost. It appears that June 8th is the start of a yearly music festival called Riverbend – a huge festival lasting 9 days and bringing over 650,000 visitors. (Poster below designed by July Curd.) 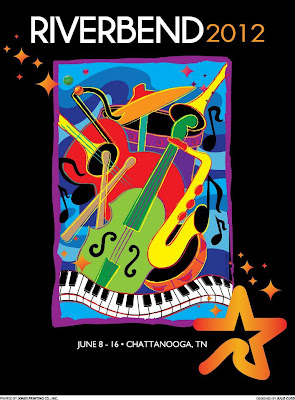 Many streets were already closed. Vendors were setting up their tents and there were trucks everywhere. There were several stages being built. 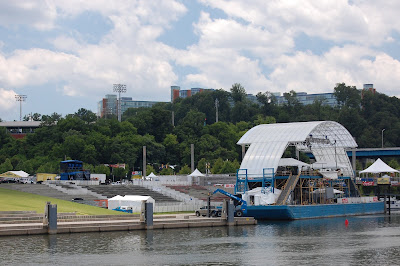 A great amount of entertainers are scheduled to appear during the 9-day festival. I looked at their program here but did not recognize many names. I did remember the group Foreigner from the 1970s – they are pictured below as then and now (courtesy Riverbend.) 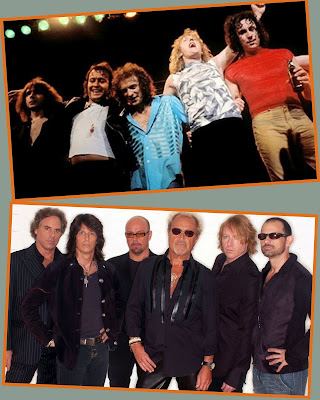 We finally arrived near the river but realized that we were on the wrong bank – we could see the Delta Queen on the other side. By the way the Delta Queen celebrated her 85th birthday on December 12, 2010. She was assembled in December 1925, just 4 months before the birth of Queen Elizabeth (21 April 1926.) 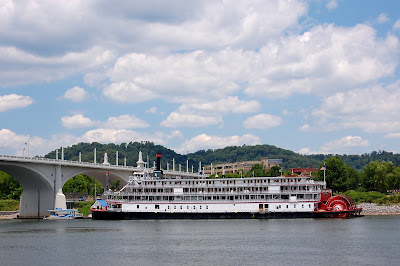 We drove up and down streets, across two bridges, and finally arrived around 3:00pm at the Delta Queen. The sun was shining; it was not humid, around 75 degrees F (24 C.) We had four full days in Chattanooga with perfect weather. We walked miles and now my knees are very painful. When we came back a book was in the mail – the book below “Queen Elizabeth II: A Diamond Jubilee Souvenir Album.” I’ll write more about the Delta Queen and our stay in Chattanooga in future posts. 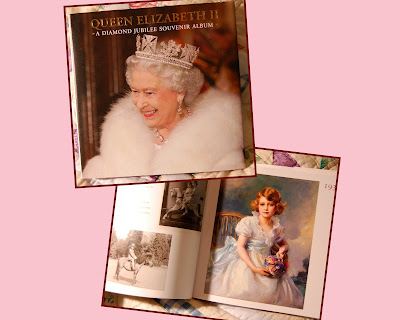 Right now I’ll take a look at this book. I’ll also get another old book from my shelves - a book I have not perused in many years “Sixty Years a Queen” by Sir Herbert Maxwell. This is an 1897 book celebrating Queen Victoria’s Jubilee which I purchased in the late 1970s at the Portobello Road Flea Market in London. 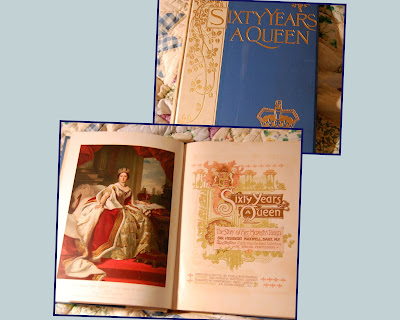 There will be several posts on Chattanooga, the Delta Queen and our cruise on the Southern Belle coming up soon… 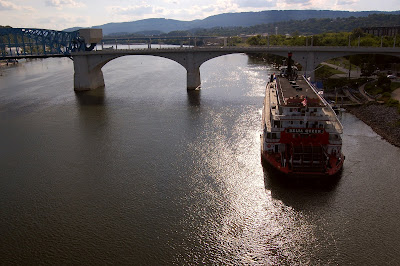 Glad you finally found the Delta Queen. I've been lost trying to find hotels quite often! It looks like a beautiful place to stay.
I enjoyed your pictures of the Jubilee celebration. I've never seen Queen Elizabeth in person, as a queen, but I did see her when she was still a princess, and I was a little girl. It was very exciting.
K

The Queen did look really happy -- and how well she wears a hat!

Your staycation sounds quite nice --even though you walked your knees sore.

You might enjoy Lee Smith's THE LAST GIRLS which takes place aboard a riverboat.

I'm mightily impressed by how much you picked up about the Jubilee celebrations. When I think of the other people in their 80s and 90s that I know, I really admire the queen and her hubby for standing about in that freezing horrible rain for hours. I am sure many people of their age couldn't stand it.

Excellent report of our Jubilee an I'm happy to report Prince Phillip is back home and has celbrated his 91st birthday with his family.
How cleve of you to point out the coincidence of the birth of the two Queens.
Has your pussy cat really got the same hair colour?

I enjoyed your photo collages of the Jubilee celebrations.
Your Staycation sounds like a great idea - something quite different! I look forward to the post that I hope you'll write about it!

Oh Vagabonde, there was a bit of Royal suspense there...I was hoping that the rain, travel route and UK Jubilee were not going to keep you from "getting to your own river queen on time."

You really did get wonderful photos of the London celebrations from your screen!

I very much enjoyed your reportage of The Jubilee...I had seen some of it, but you filled in quite a bt I had not seen....
It was something when the planes flew over with the Red, White and Blue streaming....And it was all very moving to me.

I loook forward to more on The Delta Queen, my dear....It sounds like it was a lovely 4 days...!

Delta Queen sounds fun. No doubt you'll do another blog. Thanks also for the Jubilee pics. Yes, it has been quite a party. Enjoy your break. Hope the delta Queen has wifi!

Dear Vagabonde, I look forward to the future postings on your stay on the riverboat and all else you fit iinto your travels. I feel like I've traveled many miles with you since I began reading your blog. You have such a wonderful sense of history and such a succinct way of presenting the facts. Thank you for inviting all of us along.

Ah, the British really know how to throw a party, don't they? I'm looking forward to your stay on the Delta Queen.

I am completely in love with your posts on the Jubilee. I've been pulling together my bits for my London post, coming soon, and think I must add a few of my Jubilee thoughts with it -- oh! I do love England.

I've enjoyed your posts on the Queen's Diamond Jubilee Celebrations. You're a thorough record-keeper, a detailed historian. I watched the whole procession on TV, and enjoyed the Queen's Concert too. I was born and grew up in the then British colony of Hong Kong, before immigrating to Canada with my family when I was 15. I remember well the fanfare of the royal celebrations, every April we'd have a holiday on her birthday, and June her coronation. I consider myself an Anglophile too, despite being 'colonized'. In recent years, I've visited England several times, and Bath a couple of times. Wish I could have stayed there more often and longer. Thanks again for your wonderful coverage of the Queen's Jubilee Celebrations.

I recall a friend in Ohio who finally was able to find time to travel on the Delta Queen when it was paddlewheeling the Ohio River before it left the area. Think it would have been an enjoyable trip.