The Island Queen in Memphis, Tennessee 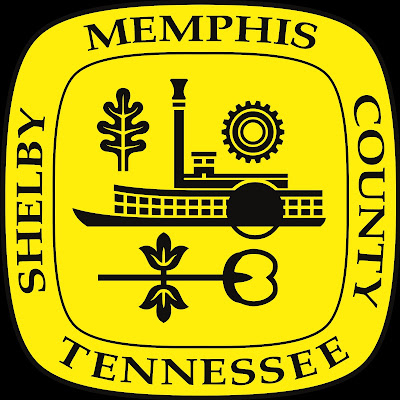 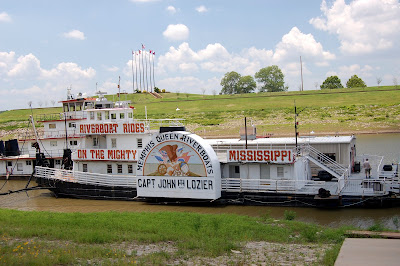 First we parked on the cobblestone levee. We were surprised that this was the parking area – these cobblestones looked ancient. 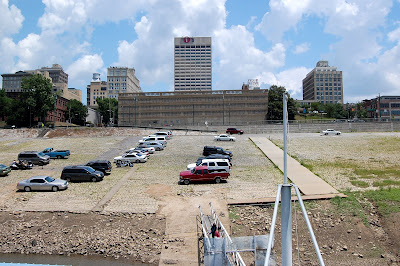 Later I found out that most river cities had cobblestone landings. Paving with cobblestones allowed easier loading and unloading on riverboats. But now all these cobblestone landings have disappeared, except the landing in Memphis which is ancient, indeed. Between the late 1860s and 1890s (they had stopped work during the Civil War) immigrant workers built the Memphis landing with stones quarried in Illinois. The Memphis cobblestone landing has such a cultural significance that in 1979 is was placed on the National Register of Historic Places. 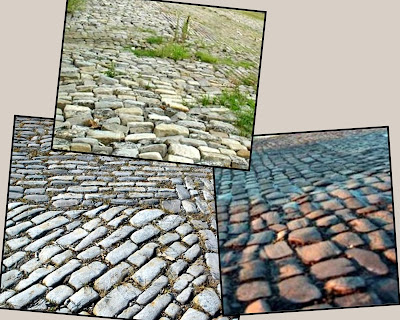 From the late 1860s, this cobblestone landing helped Memphis become the largest cotton and hardwood market in the world. Numerous mules were used to unload the ships and take the products up the cobblestones to the warehouses. Below are some vintage postcards showing cotton on the levee. 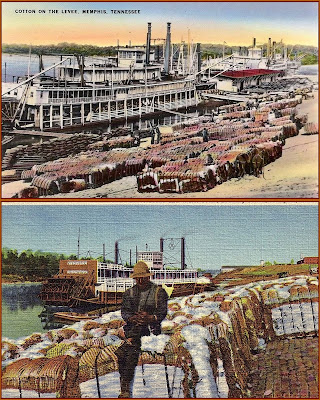 Memphis was a major riverboat port where the ships would stop and tie up at the foot of the cobblestone landing, as shown in the old photos and postcard below. 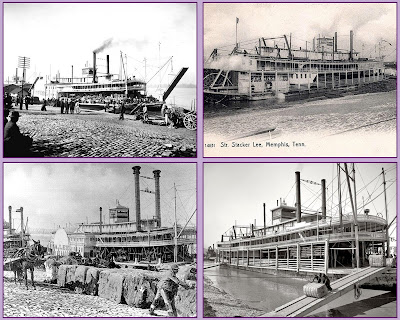 These cobblestones have been in continued used for over 150 years with little maintenance, it would seem. However, I read in The Memphis Daily News that a $6 million restoration project has been approved. The cobblestones will be restored with walkable pathways, a plaza, a fountain, and a ramp for launching canoes and kayaks. Memphis history is tied to the river and its port as can be seen by the Memphis City Seal on the top of this post - it includes a riverboat. We entered the Island Queen, the riverboat for the 90 minutes sightseeing cruise – postcard below. 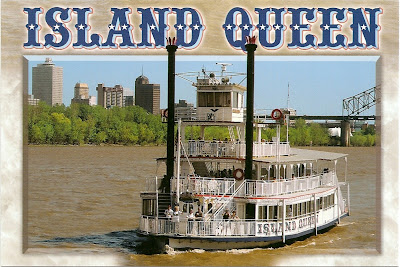 We walked upstairs as it was such a lovely day and sat on deck in the sun. 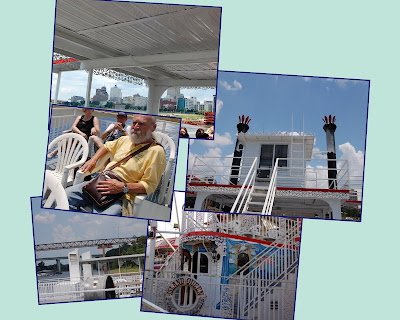 A guide, called a “riverlorian,” greeted the visitors and started giving information on the history of the Mississippi. The Mississippi River is the second longest river in the United States and the largest by volume. The guide told us that the Chippewa Indians called the Mississippi Meze-Zebe, the Ottawas called it the Missis-Sepi and the Kickapoo called it Mechas-Sepua - they all translate into “Great River” or “Large River.” 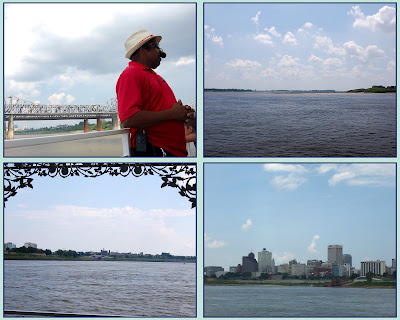 He also gave us the history of Memphis and explained the reason for the flags on a hill we passed by – the city had been under the control of the flags of Spain, France, North Carolina, the Confederate States and the United States. He told us about the yellow fever epidemic of 1878. About half of the 47,000 residents of Memphis (25,000) fled the city and more than 5,000 died. There were 120,000 cases of yellow fever in the Mississippi Valley with 20,000 deaths. The epidemic bankrupted Memphis. As our riverlorian talked we went under bridges and saw the monorail going to the Mud Island River Park. 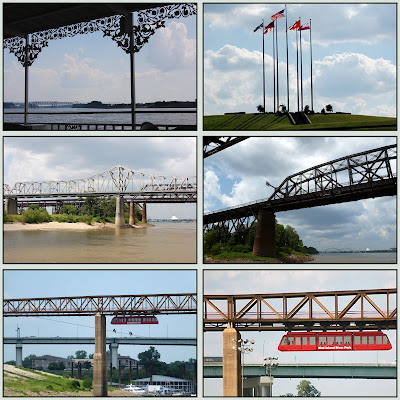 There is much history associated with the Mississippi River – books have been written on it. It has helped commerce but it has been a grave for many. The guide told us about Tom Lee. Late on May 8, 1925, Tom Lee was on the river and witnessed the ship M.E.Norman capsize about 15 miles from Memphis. Tom could not swim but still rescued 32 people with five trips to shore. He worked until night saving these people (only 23 died.) To honor this hero money was raised to purchase a house for Lee and his wife. After he died a park was named after him along the river and a bronze sculpture was erected in the park. 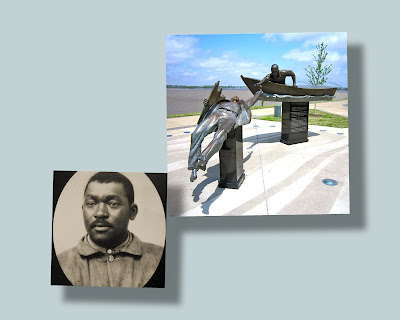 The guide told us about another tragedy – and added it had been the worst maritime disaster in American history. This terrible event was not well reported because it occurred on April 27, 1865. The media did not cover it much as it happened only 13 days after the assassination of President Abraham Lincoln. The steamship was named the Sultana and had made many trips on the Mississippi River. The ship left New Orleans on April 21, 1865 with passengers and goods, and even though boiler leaks were discovered in Vicksburg (and hastily repaired) it proceeded to board 2,000 more. With close to 2,400 passengers the ship was grossly overloaded. These were Union soldiers going home after the Civil War. Below is a picture of the Sultana taken just before its sinking. (Courtesy Library of Congress.) 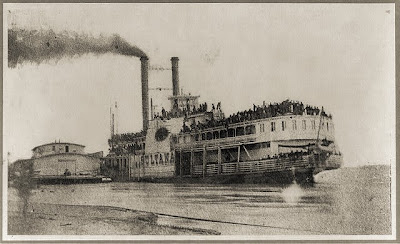 The Sultana stopped at 1:00 pm in Memphis for further repair then left, but about 7 miles downriver, three boilers burst creating a tremendous explosion, burning passengers and blasting them into the water. It is believed that as many as 1,800 passengers died – making it a worst tragedy than the Titanic sinking which happened 47 years later when 1,500 passengers were lost – but the story of the Sultana is still not well known. As our riverlorian was talking, the sky was getting darker. 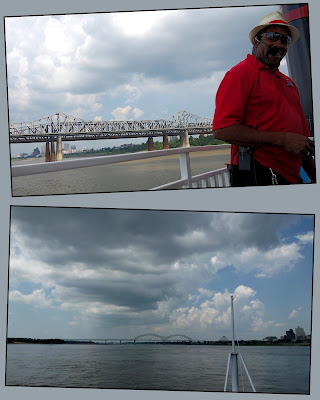 My daughter said a storm was approaching but I replied that the weather forecast had given a 100% chance of sun all day. After hearing about all these deaths in the river I was not looking forward to a heavy storm. But, unfortunately, suddenly it started to rain, and it was a downpour. Passengers quickly left our deck and there was a melee to get down to the covered second deck. We went, too. The rain was pouring from the port side so all the passengers were huddled on the starboard side. 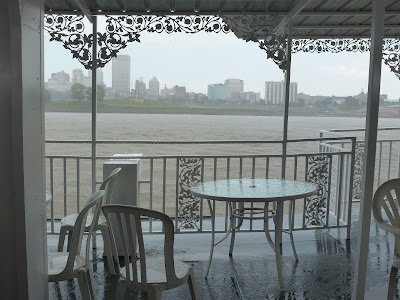 As the storm intensified more passengers kept coming and I have to admit, for a moment, I thought the boat could capsize as it was so overloaded on one side – it was not a pleasant idea. I tried to take pictures of the water then I placed my cameras back in my bag so they would not get wet. 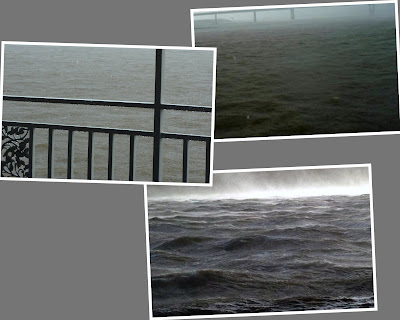 My daughter took pictures with her cell phone. She later gave them to me. As you can see below the visibility was very poor. I certainly could understand how it must have felt to be thrown into the river…. 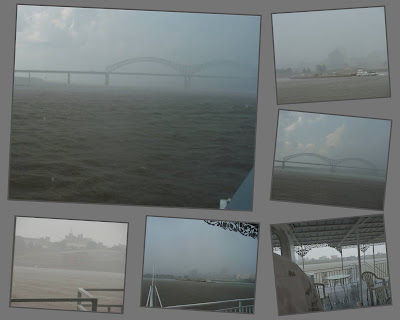 Our riverlorian kept talking, but I could not hear him well. But then we came out of the storm and as we approached the riverfront, everything looked calm and pretty again. 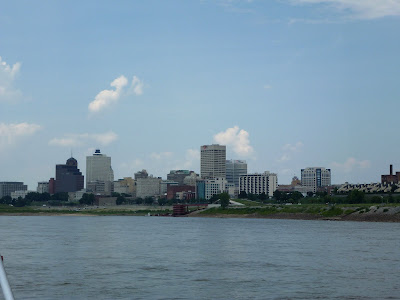 A very interesting tour and wonderful history. I'd never heard of the Sultana.

The only time I have been on a river boat it was a paddle steamer and I was very ill! The storm did not sound good. Interesting post as always. Have a good week. Diane

Interesting history! We have levees and ferry boats nearby but I've never seen cobblestones around. Sounds like a fun day!

I would so love to visit!
I loed the old steamships in Muskoka, back in the day. Only way to visit.
Greetings from Cottage Country!

a marvelous post!!
I was lucky to have enjoyed a cruise on the Natchez in New Orleans on a trip there with my sister. It was such a wonderful experience.

I never heard of the Sultana. Fascinating story. And I find cobblestones really hard to walk on; I am supposing they will make pathways amongst them? I really enjoyed this, VB, but then again I enjoy all your posts! :-)

I'd love to be able to see these river boats. It would be so interesting to take a trip on these. Thanks for the history lesson.

There is so much History connected to the Mississippi and all the many cities it passes through. This was very very interesting---I have never heard of the Sultana---What a disaster!
The MEMPHIS QUEEN is a Beautiful Boat....Thanks for the amazing tour. That storm looked really scary!!!

That must have been a bit scary.
Those cobblestones could have come from the cotton towns in Lancashire, they are so similar.

Wow, that storm was scary and I can understand your concern. I'm so glad you posted this. We lived in Vicksburg when the Delta Queen and the Mississippi Queen docked there for people to visit Vicksburg's Civil War Military Park. I loved to hear their pretty river music as they departed for Natchez and beyond. I seem to remember the story of the Sultana from living there.

Memphis wasn't far from where I grew up. When I graduated from college, my career could have taken me either to Memphis or Houston. Fate intervened and I ended up in Houston. But I do have relatives still in Memphis. You've made me want to visit.
Sam

Great overview and a bit scary. I used to live along the Mississippi River in Iowa and would see the paddle wheel boats traveling down. Much fun.

The historical things we never hear about would be enough to sink a ship, Vagabonde, I'm sure. And to think you had that kind of rain on a 100% sunny day! It just shows to go ya...somethings cannot be controlled. I bet the mighty Mississippi is one of them!

Dear Vagabonde, thank you once again for this history tour. As you indicated, the Sultana tragdy is one I've never heard about. Over 1,800 died--that's astounding and heartrending.

I so enjoy your photographs and the vintage postcards. They enhance your stories greatly. Peace.

Who said blogging isn't serious writing? Not by what I read, information I would never find anywhere else! Great post, Vagabonde. One day, I want to travel on the Mississipi, just because of this post!

That is all most interesting. Bit I wonder what the longest river is (I had always thought it the Mississipi).
Very sad about the Sultana. But incredible that the stokers should have wanted to carry on with a boiler that had received a temporary repair.
It sounds as though something criminal was going on here. Was anyone prosecuted, I wonder. And why such a high death toll?

Very interesting history! I love your vintage postcards. What a tragedy the Sultana was, especially thinking those soldiers had survived the war only to die on their way home. Riverboats play a large part in Fairbanks history too. The river was the best way to reach Interior Alaska during the gold rush. And of course there is a riverboat today that is used for tours down the river.

One always thinks of the best of the 'old days', and just as I was thinking 'what a gracious way to to travel' I got to the part regarding the sinking of the Sultana, and your terrible weather while aboard. How terrifying it must have been to have been on the Sultana.

Oooh, I love this post! I'd love to take a ride on the Mississippi one day and Memphis is definitely a city I'd like to visit. That is one huge disaster, isn't it? Truly shocking.

Fascinating! I love the idea of cruising around on the Mississippi... such an incredible river with a rich history and folklore...

I went on a short steamboat cruise out of New Orleans in '94, but the only thing I remember was the fabulous Dixieland Band that played! :o)

Hi Vagabonde,
I have been amazed with your energy and curiosity and knowledge!! Thanks a lot for another informative blog with timely topics!
Have you heard "The Rose of Versailles" which is the series of Japanese comics, manga in Japanese? Manga is part of our culture. The first publication was in 1972. The story is set in France during the French Revolution. Because of incredible popularity, the story has been adapted into films, musicals and so on.
While reading your post, I remembered the above story.
Have a great week!
keiko