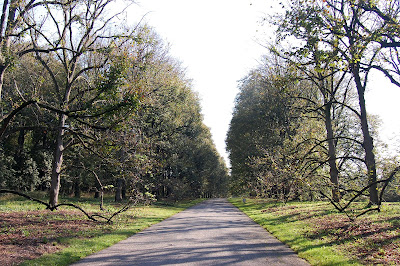 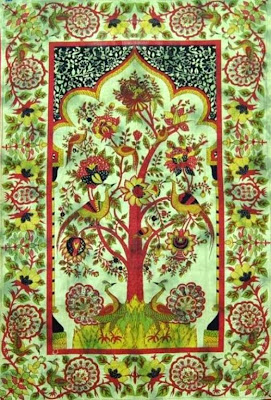 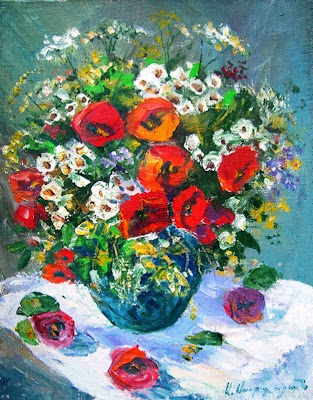 I saw several posts from you in my Reader, but when I went to your blog, this is the one that appeared. I do hope Blogger gets itself straightened out! Thinking of you and hoping that everything goes well.

Blogger is so famn F---ed Up!!! The inly way I could get to your blog at all, was to go back to my Blog list on my Sidebar....
So sorry things have been rough for you and yours, my dear...I understand. I truly do.

The poem is quite beautiful, Vagabonde, and your chosen artworks complement it well.

Lady of the Hills – Thanks for your comment. I hope you are feeling better and understand your feelings about Blogger – it’s nerve racking.

DJan – I almost gave up last night and deleted the post. First I had problems with spacing. On the draft the spacing was fine but on Preview it added lines in some places. When I clicked on Published it did not update the post to Google Reader. I waited for quite a while and published another post with just the same title but no photo or text, at 9:44 pm and that did not update either so I went back and deleted it. Then I went back to my original post and placed it back in draft and added a last paragraph and scheduled it for 10:00 PM and pushed Done – it showed that it would publish then. Later when I looked at Google Reader it had published, but the second post (deleted) with just the title, the one from 9:44 PM. Just now I went to look at Google Reader and it updated at 4:14 am today my post of Art in the Park of September 20th! That’s 10 days late! Another thing, this new post from yesterday took one whole page. It is certainly frustrating.

Thanks for your understanding and for still trying to read my blog.

Frances – I am pleased you liked the paintings. I appreciate your comments.

The poem - one I've never read - is one I will print out and add to the very small collection beside my laptop. I imagine that it will speak to many of us.
I am still in the process of catching up, so will go back and see what you have written.
Thinking of you - and if your ears were burning in September it's because I was talking about your posts with a couple of UK bloggers!

Hope things work out all around! Loved your pictures, and the commentaries. I thought for sure my French had come back!

The poem was lovely and I liked the pictures you had chosen to accompany it.
Sorry you have had such a hectic time and glad your husband's second procedure went well and making good progress. Take care.
Sarah x

I'm wondering why I don't have any problems with Blogger, Vagabonde??? (Knock on wood!) That doesn't make any sense to me. But I can imagine how frustrating it must be! Still, I love how you have done this post, in spite of the frustration!

Dear Vagabonde, this posting is such a boutique of delight for the reader and viewer. The poem speaks volumes to me and the artwork contents my desire for beauty. Thank you again as always for enriching my life. Peace.

Dear Vagabonde, I forgot to wish your husband good health. I hope the days ahead find him feeling better.
And I hope also that the treatments work. Peace.

Glad to hear that your husband is doing well. Take care, Diane

A bittersweet poem... we bloggers will have our blog archives to enliven our fading years.

All best wishes for your husband..

I love most all of the art you posted, but if I had the chance to purchase La Voyageux (sp.) I think I would. It's so cheerful, a bit frazzled and full of color -- just like me!

I must read down -- Seems I just get to reading on weekends and may have missed something. I'm glad your husband's procedure went well and hope treatment isn't terribly difficult or long. Sending hugs, jeanie

Just as I am making a full comeback on the blogs after a hectic summer, I read you only to learn that your husband has had health problems. My thoughts are with you both. What else can be said?

Wonderful post BTW. I am not surprised to hear of your problems with Blogger. Others have had major issues to, mainly since the hated new interface was imposed on us.

What baffles me is the fact that many do not seem to have any major issues. It seems to depend on the workspace (computer, OS and the like). It may also be related with the template used, I don't know. It all seems to be a matter of luck, par for the course with Blogger-Google.

My thoughts are with you.

Sincere wishes for your husband's complete recovery. I know how totally absorbing this can be.

Isn't it awful how suddenly a system - blogger - which has worked well for years suddenly goes bananas. So frustrating for us all.
Nevertheless you have provided an excellent post with beautiful pictures and words. Bravo!

I hope your husband is responding well to all his medical procedures and treatment. Do take good care of yourself, too.

These paintings and sentiments are lovely.

I, too, periodically have difficulty with Blogger failing to produce as I have prepared. My current post has paragraphs run together with spacing absent that I set up. I tire of trying to correct what won't change, so just left it again.

Will look forward to your return here when life permits.

A truly lovely combination of words and images, Vagabonde, though I'm sorry you're having such problems with the new Blogger system, as am I. It's a change which is definitely not for the better.

I'm so glad your husband's medical procedure went well and I send him my best wishes for his further treatment.

Very nice painting, thanks for sharing.