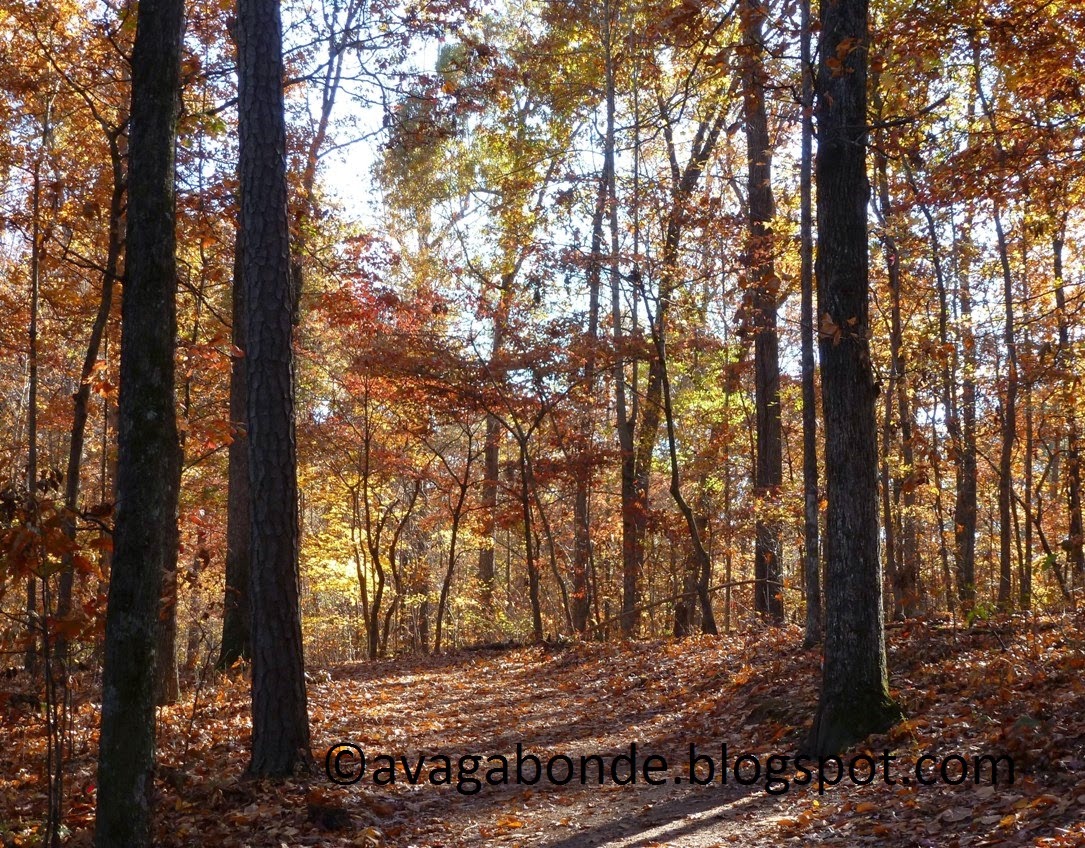 Peak fall foliage in North Georgia can be seen from early to mid-November.  I thought I would wait to download my trip pictures for a little while and take photos of the leaves before they were all down.  In our own yard fall foliage made a pretty ceiling. 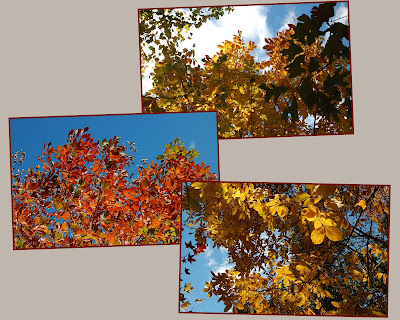 Last week we took some walks close to our house to take a peek at the leaves.  First, we went to the Smith-Gilbert Garden (I have written several posts on this garden before.)  Some of the colors on the trees and shrubs went from pale yellow, through a vibrant gold and orange to deep burgundy. 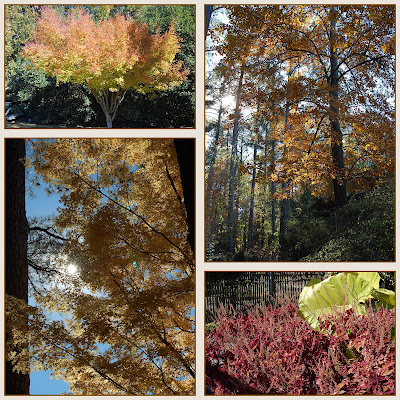 There were still some flowers left in the garden, such as this late rose. 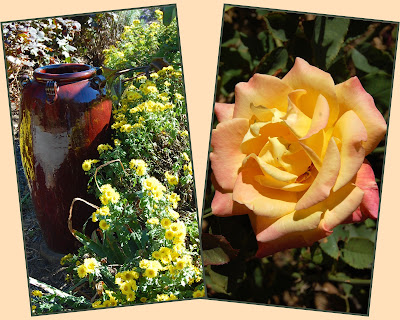 The camellias were starting to bloom. 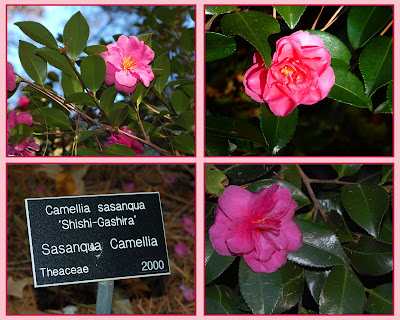 The cotton was ready to be picked 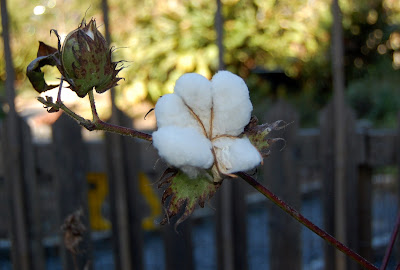 and the tobacco plant was drying in the barn. 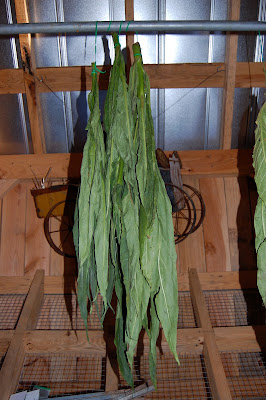 The next day we went to the top of Kennesaw Mountain as the large Kennesaw Mountain National Battlefield Park (2923 acres or 1182.9 hectares) is only 4 miles or so from our home. There were many pretty colors there as well. 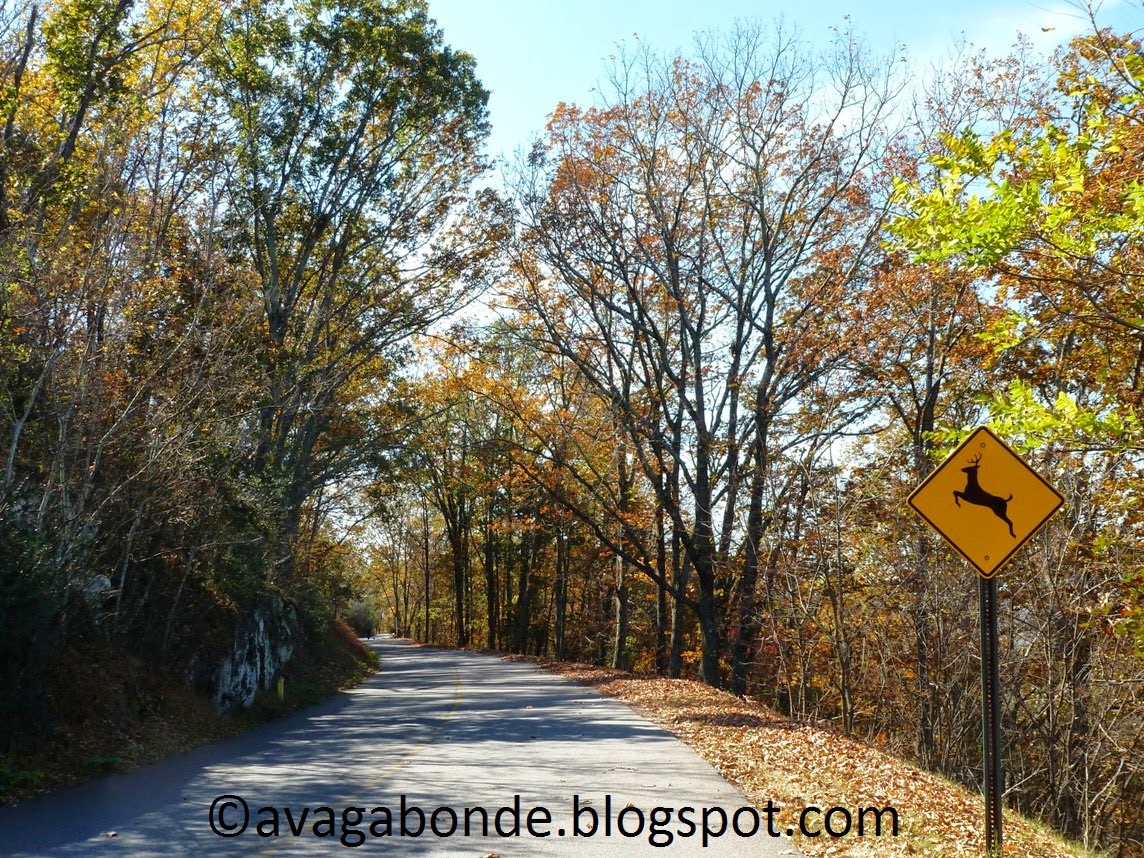 The day was clear so we could see Atlanta in the background.  Click on the picture to see better.  The white line in the sky is not a scratch mark, it is a high flying plane. 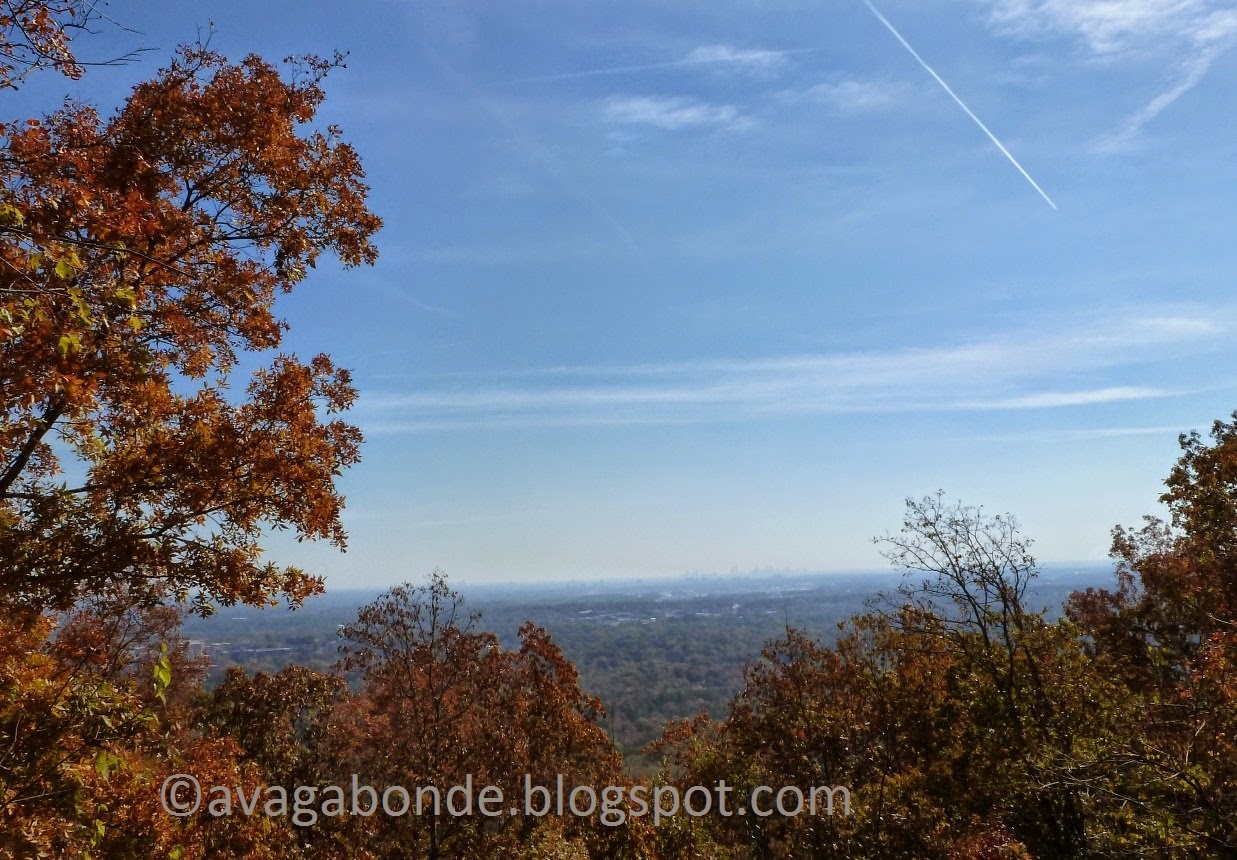 After admiring the colors and the view for a while, we walked down toward Little Kennesaw Mountain. 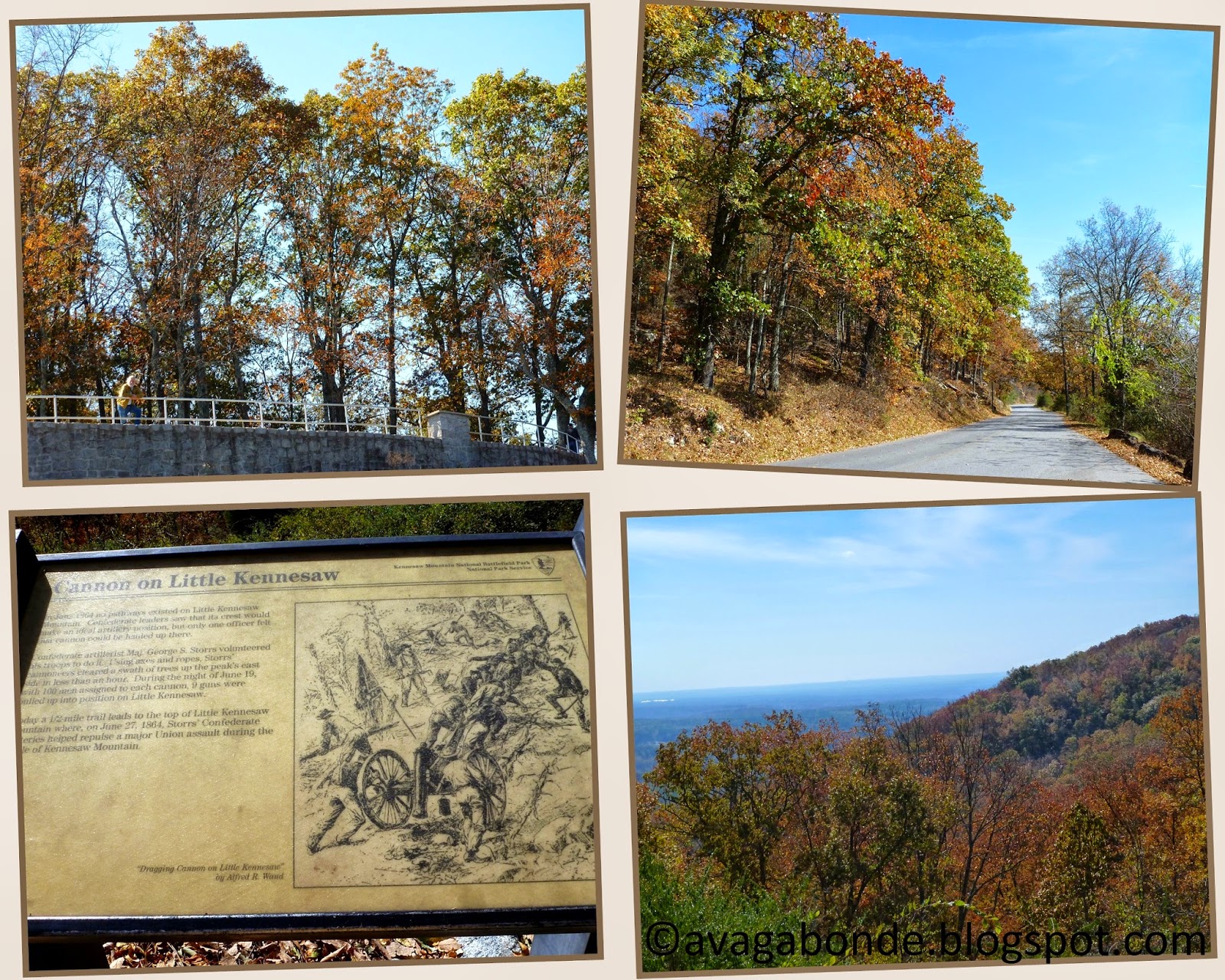 There is a trail going down then up to Little Kennesaw Mountain but after our trip my knees were not happy and resting on a bench while looking at the mountain was much more pleasant. 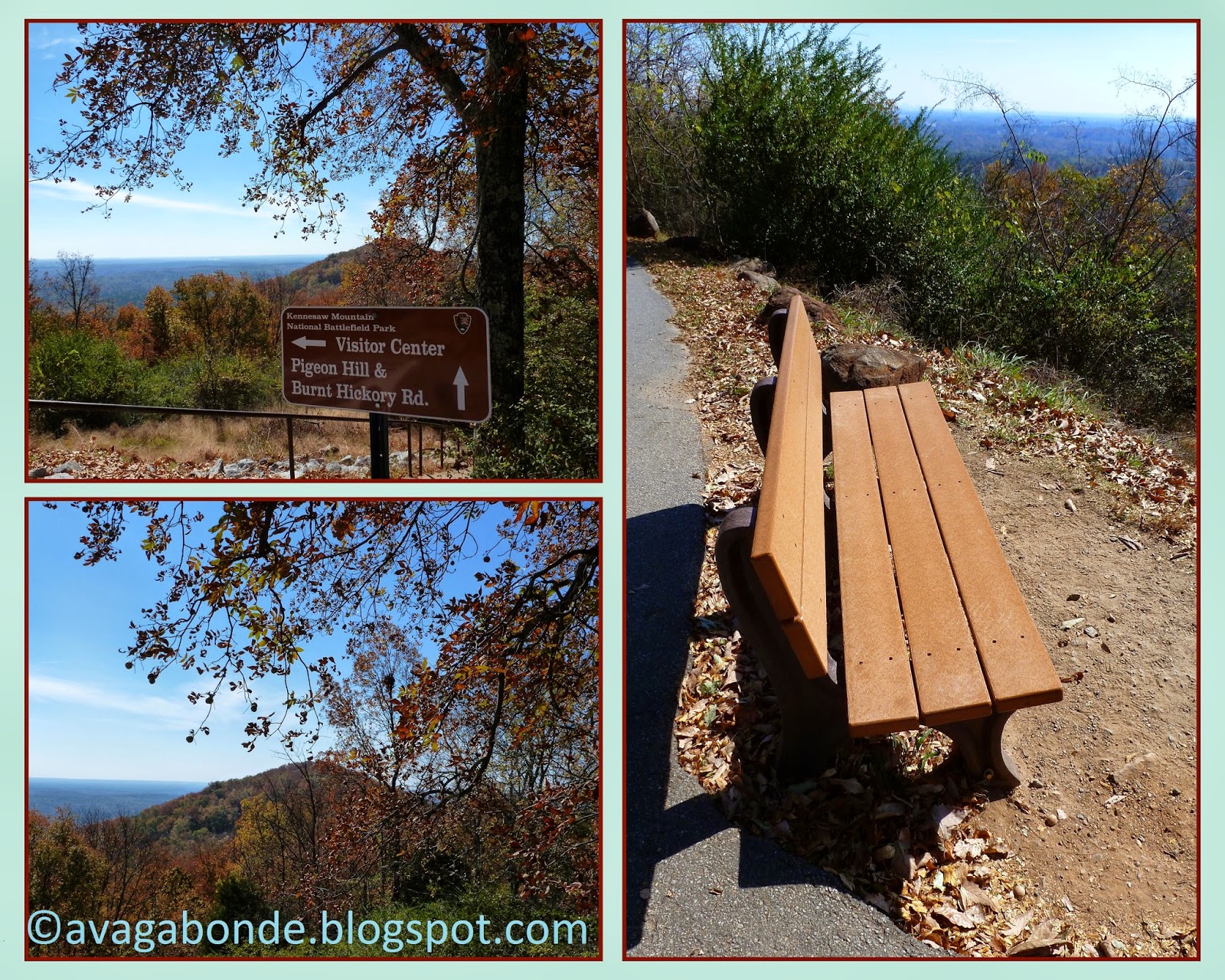 There, too, I saw some flowers - little wild flowers nearby. 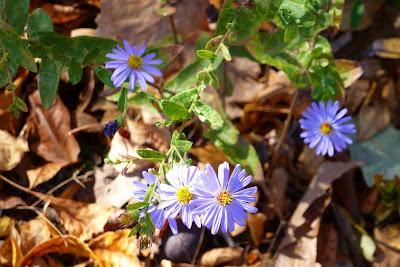 Yesterday it rained but today was so beautiful and warm that we decided to go back to another part of Kennesaw Mountain National Battlefield Park and walk one of the trails.  We passed by the plaque explaining that 5,500 soldiers walked on the same trails during a Civil War battle, in 1864. 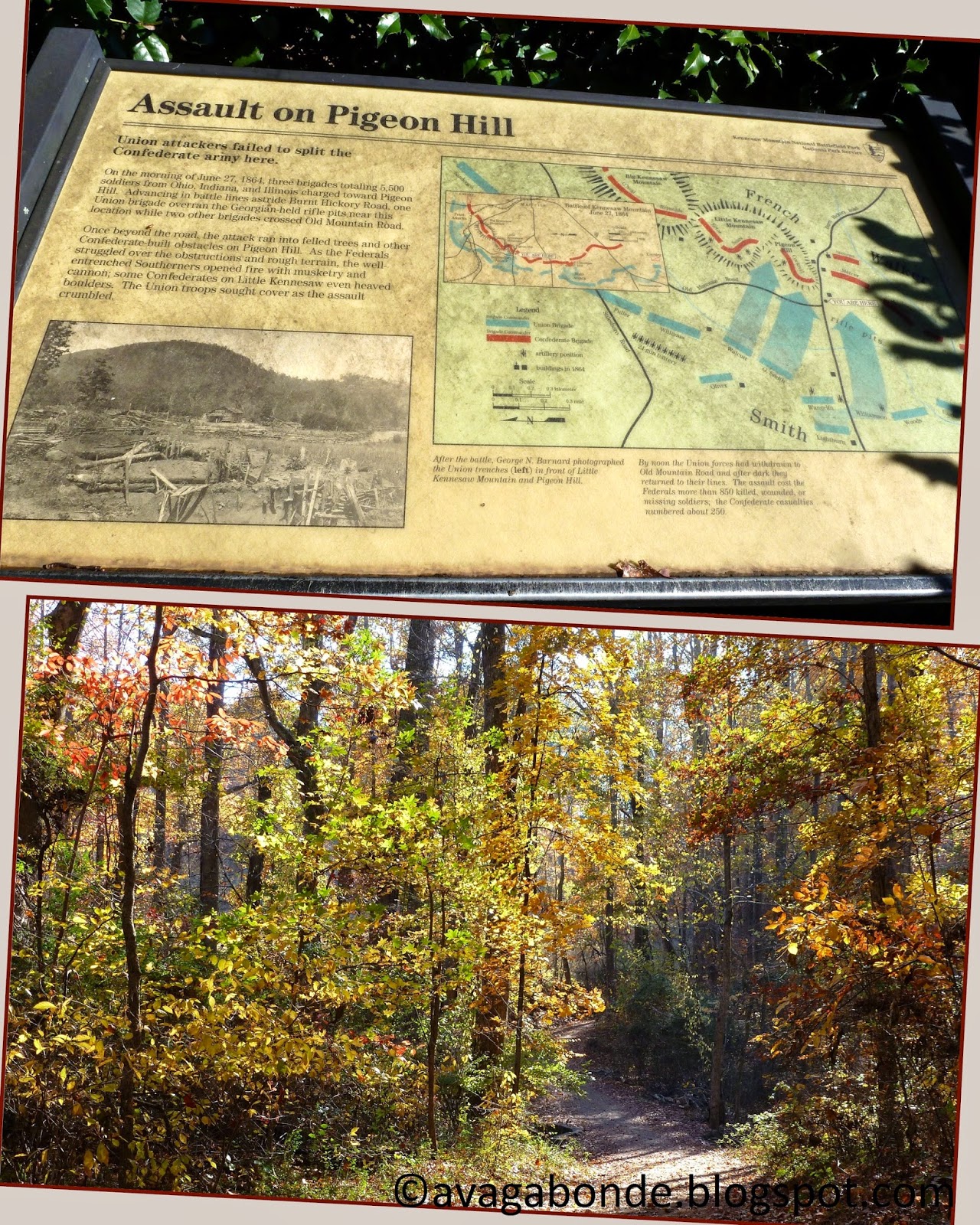 When walking on the trails of this battlefield park, and really in the footsteps of Confederate and Union soldiers,  it is hard not to think about the battle which took place here between June 19 to July 2, 1864 and where 5,350 soldiers lost their lives. 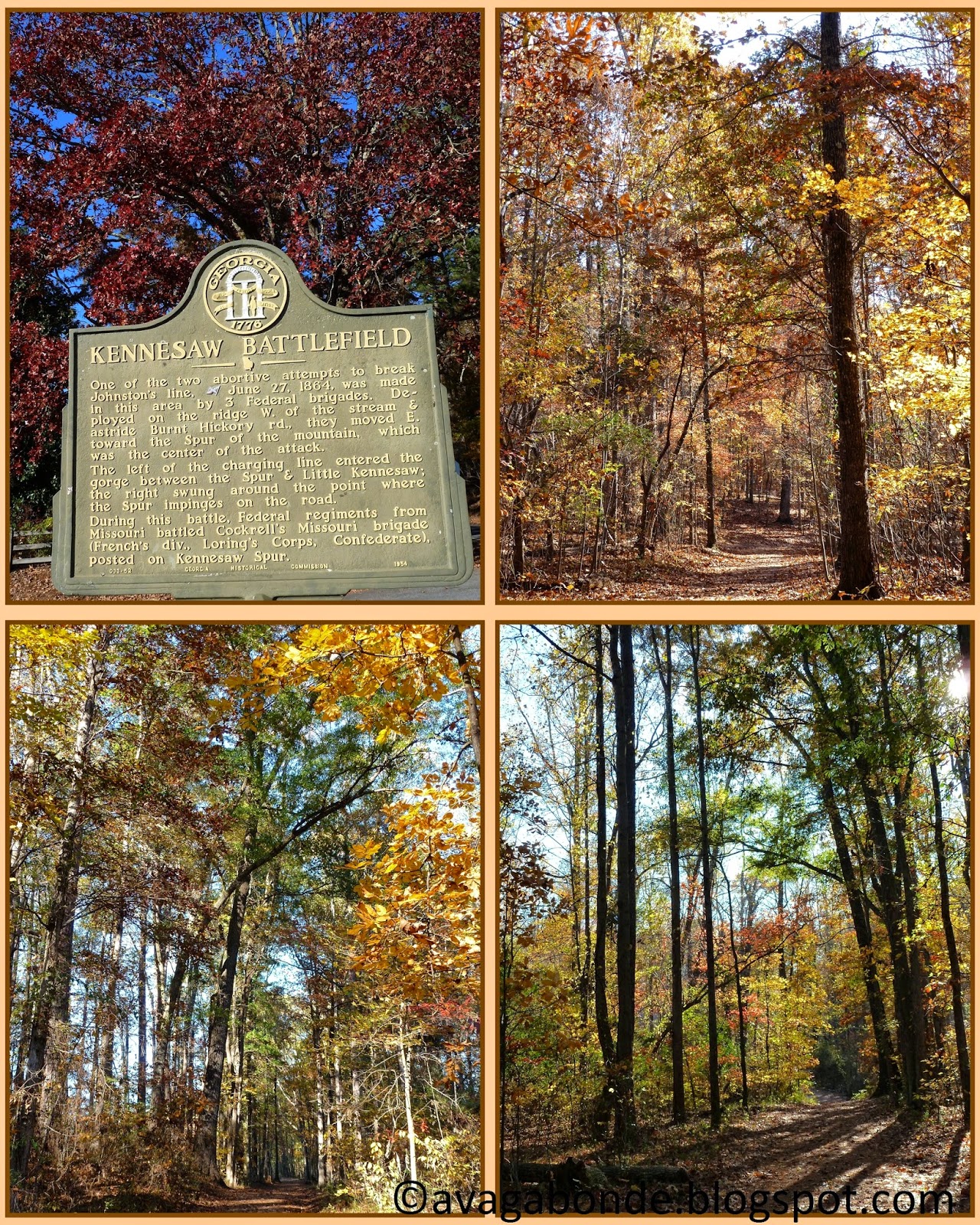 Last Saturday we went on another outing in a county 20 miles away, but that will be in my next post. 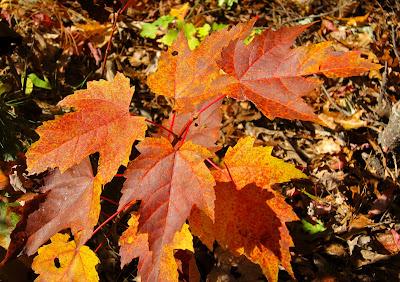 I've never been to Georgia, but now you've made me want to go there with your glorious photos. Wow!

Lovely color and photos! There's something about battlegrounds like Kennesaw that takes hold of you and fills you with profound sadness. The Civil War was such a tragic time in our country's history, and hopefully we'll never see anything like that again.

I'm glad that you are able to get out and enjoy your beautiful weather. Ours isn't so conducive to taking a walk, even thought the sun has been shining brightly--20 below at night and around zero in the day.

Great colours and beautiful place to go to admire them. Me too, I could not resist taking hundreds of photos and will bring them up once I have made the difficult choice. Thanks for sharing.

What wonderful pictures of autumn's glory, Vagabonde. You are certainly taking advantage of all that beauty in your walks.

Your blog looks very good! I like the layout quite a lot. And the pictures, as usual, are wonderful. I will be leaving for Texas to visit my family next week, and those pictures remind me of the terrain there. I'll be sure to take lots of pictures, too. Sending you hugs!

Vagabonde, you all have such lovely colors in your area! Even after our recent wind, rain and snow, we are still mostly at the yellow and green leaf stage, with just a few red accents.

It was also great to see those camellia blooms.

Please do not wear those knees out on those trails! xo

Vagabonde, thank you so much for your comment on my blog and for leaving me the links to the two posts about your mother. What an amazing place to live as a child and what a wonderful career she had at the House of Worth. Fascinating!

Lovely photos of the Smith-Gilbert Garden. I had to look it up on the Internet. I take it you live near there. As I mentioned in an earlier post I am originally from Georgia, but much more south & east... about half way between Augusta & Savannah.

Thanks for visiting my blog. Our Colorado River is in central Texas and is not to be confused with the one that runs through the Grand Canyon. I'll be back for another visit... I hope your husband is getting well from his ordeal.

Such a relief to see some beauty.

Dear Vagabonde, I recognized the name of the battlefield from my reading about the Civil War. Do you plan on going to see movie "Lincoln"? I think it's being released next Friday. Peace.

What amazing country this is. You really captured its unique beauty for us. I was captivated by the cotton. I'd love to go to this part of the country sometime.

It's my favorite time of the year in Georgia, Vagabonde. I'm glad you've reminded me of it! Thank you.

My, you live in such a beautiful country. Just looking at your photos filled my heart a little bit. I love the autumn colours and the really tall trees but that view is amazing!

That war memorial must have been really touching. I know we did a lot of tours around battlefields in South Africa and they always moved me.

Such lovely fall colors you have captured here! fall is such a gorgeous time of year, but winter can get a bit tedious. Looks as if you had a lovely outing, and it is very touching to see some of the civil war sites. Especially amazing when you think of how the armies got around! Certainly different from today. Lovely post.

Autumn is like a second colourful season, the glory of old age, giving up all kind of faculties but wisdom.
Your last photo shows the rich colour best comparing to all previous photos, which are also very beautiful.

It is amazing to think that years ago the same path was walked by many others. Were the colours as wonderful then as they are now, I wonder?

Hi There... Great Fall photos! What's with the cat? Is that his curly tail or something else? We have a cat as well...his name is J.D. I collect postcards as well, but most of mine are USA pre-1910. Take Care, Big Daddy Dave

Hi! Me again! Could you please write that story about the check from your mother-in-law, that you found after 15 +years.I have the feeling that you can write a nice romantic story about this subject of missing mail!

Such a beautiful collection of fall photos. Here in Baton Rouge we go from green to brown to bare limbs. You are blessed to have color. :)

Just beautiful... love all the fall colours you've shown us. In contrast, we're all white, yes, deep in snow for a couple of weeks now, and thanks to the sunshine these couple of days, it's beginning to melt. I look forward to your post on your Odessa visit. Looks like a most exciting cruise you went on. Don't suppose you've gone into St. Petersburg? Yes, I'm think of Anna Karenina. But hey, thanks for thinking about me as you visited Odessa and Count Tolstoy's mansion.

My what a lot of trips you've had lately!. I'm not a rose person, but I love that yellow rose with the pink blush on the edges. Thanks for coming by my blog.

Wonderful pictures, Vagabonde! The first one is my favorite!

WOW!! looks like home to me...I love all of your pictures..this year has been so pretty for Georgia..I love your sasanquas too..such a good post..