Christmas at Bulloch Hall with US Presidents - Part 2 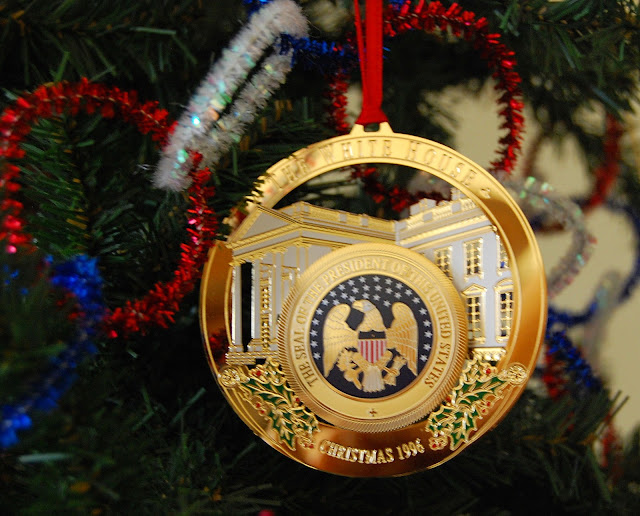 This is a continuation of my post of December 13, 2012.  I read in a couple of comments that some felt strange to see the US flag with Christmas ornaments.  The theme for the decoration of Bulloch Hall this year being about the White House, I can understand that it would have to be patriotic.  In addition, the USA is one of the few countries whose flag is like an icon.  There is a flag on my neighbor's house and a flag on a tall poll on my neighbor across the street.  They keep them up all year.  During our last trip to Europe I noticed very few flags and while in Ukraine had a hard time finding one to photograph. The USA is also the only country (apart from the Philippines) where children pledge allegiance to the flag in schools. (Please click twice on the collages - the pictures look so much better when they are enlarged) 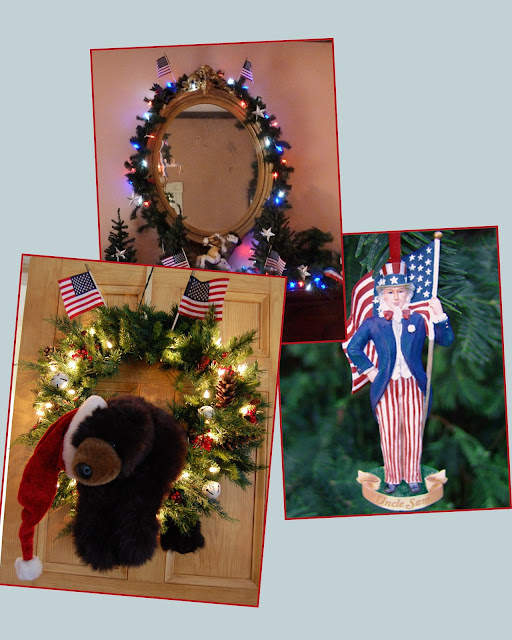 We continued our visit and entered the room where President Abraham Lincoln (16th President 1861-1865) was standing with his wife First Lady Mary.  The information panel stated that these were full life-size figures.  Certainly President Lincoln was tall - 6 ft 4 (1m93) and his wife looked diminutive next to him at 5 ft (1m52.) 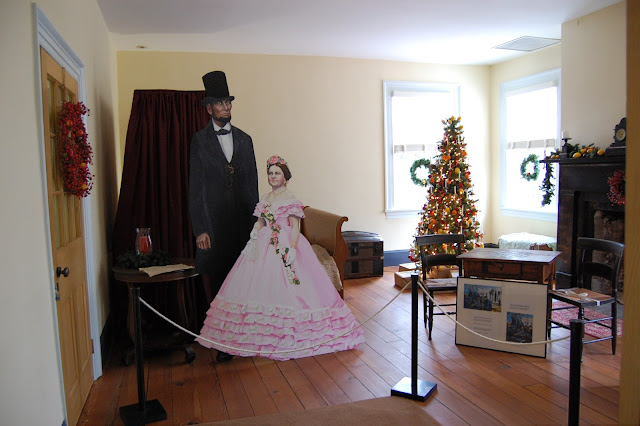 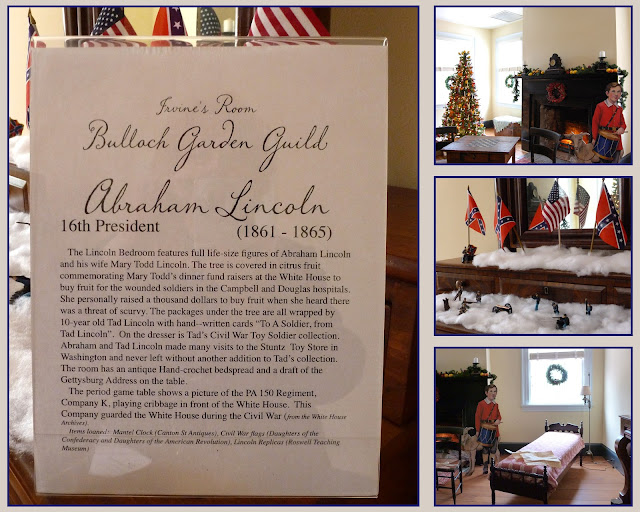 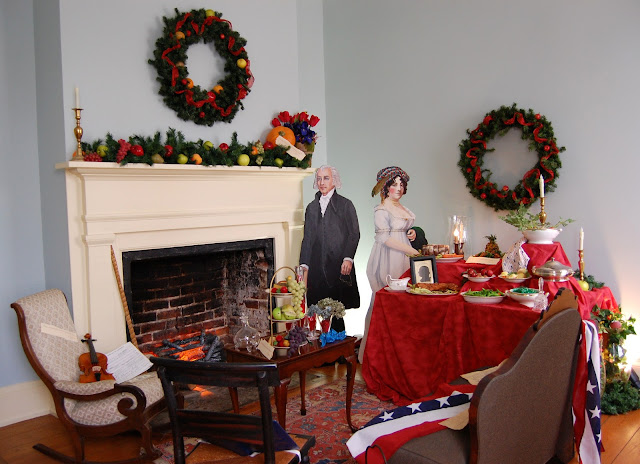 Dolley Madison entertained with splendid tables containing magnificent platters of meats and fowls, cakes, fruits and bottles of spirit. When in August 1814 British soldiers burned the President's House, Dolley Madison rescued important documents and the painting of George Washington from the burning house. 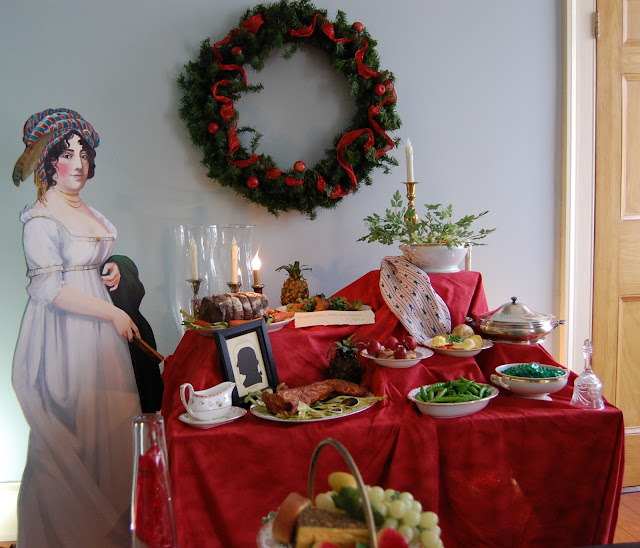 Also in the Morning Room was a panel on President Thomas Jefferson (3rd US President - 1801-1809.)  There was no portrait of President Jefferson, just his image on the 2 dollar US bill.  Jefferson is credited as author of the Declaration of Independence and was responsible for the Bill of Rights.  President Jefferson was also an accomplished violin player. 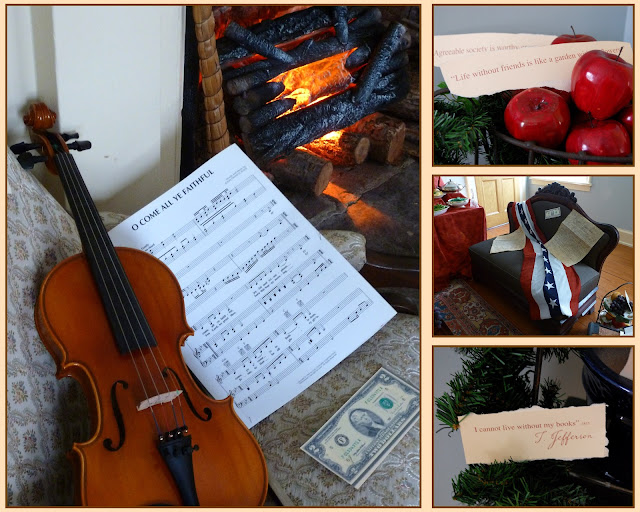 As we walked back into the upstairs hall, I stopped to look at a Christmas tree decorated with White House ornaments. 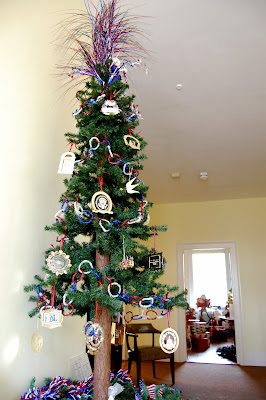 Some of the ornaments show the White House and several US presidents. 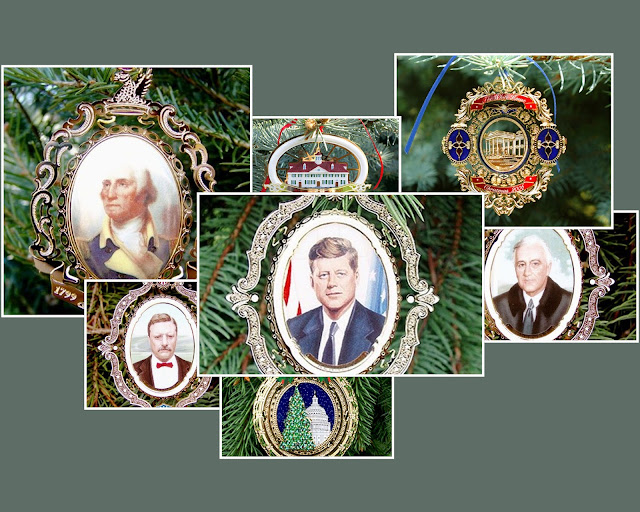 The Back Hall had a little exhibit on the White House pets. 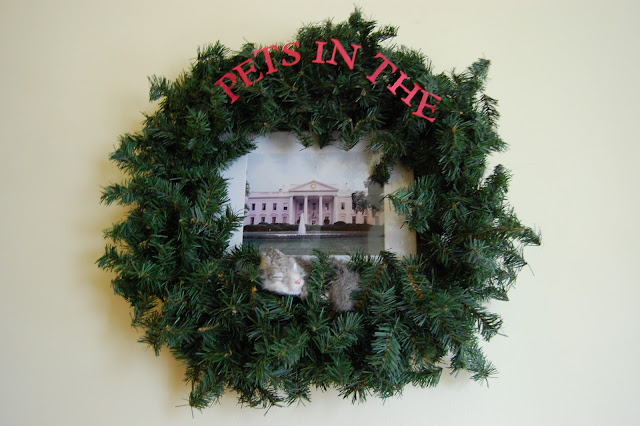 Many pets have called the White House home.  The Marquis de Lafayette gave President John Quincy Adams (6th President - 1825-1829) a pet alligator and it lived in the East room bathtub.  Other pets along the years included horses, guinea pigs, birds, cats, dogs, a pigmy hippo, a bobcat, a cow, etc. 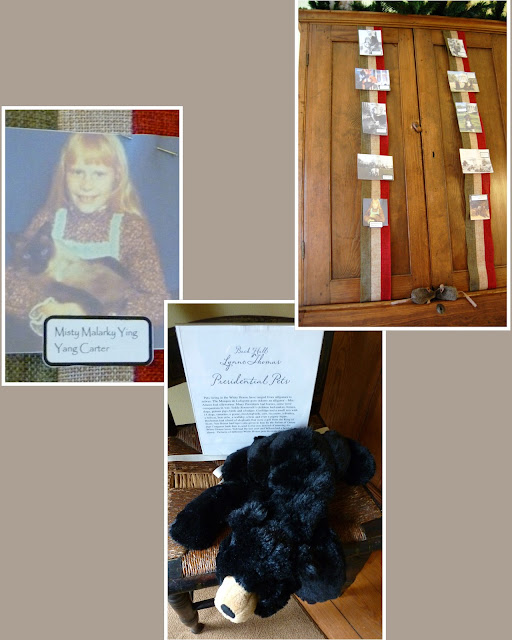 Walking back downstairs we entered the Pantry and were greeted by President Jimmy Carter (39th President - 1977-1981) and First Lady Roselyn Carter. 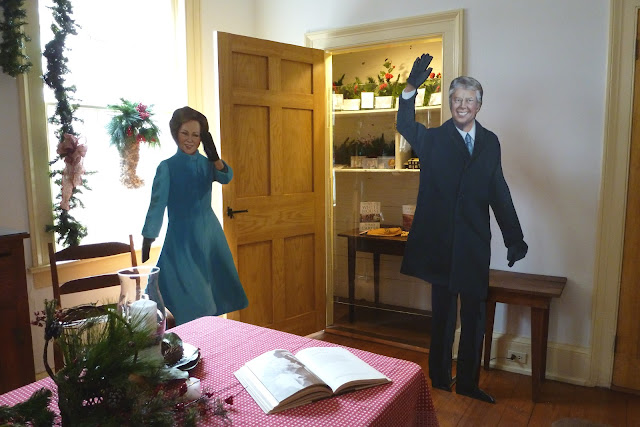 I walked behind President Carter to look at the items in the cupboard.  They contained photographs of the president and his family and books that he wrote. 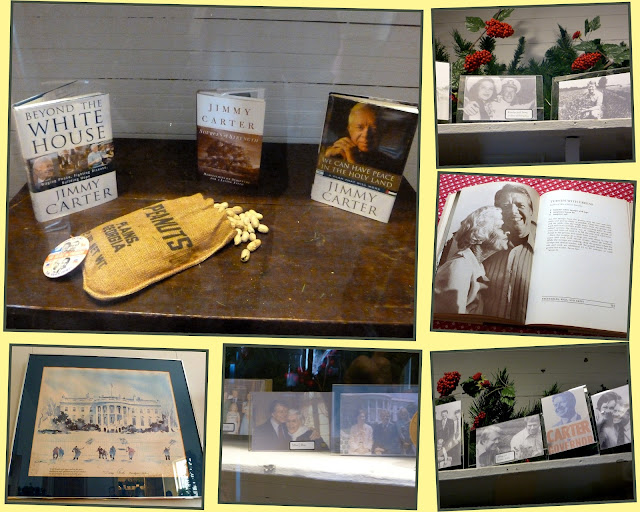 The star on top of the Christmas tree was made by Jimmy Carter and his brother and sisters when they were children. 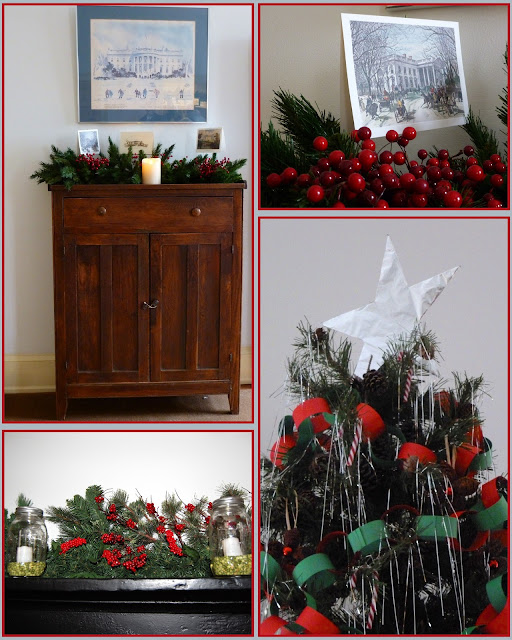 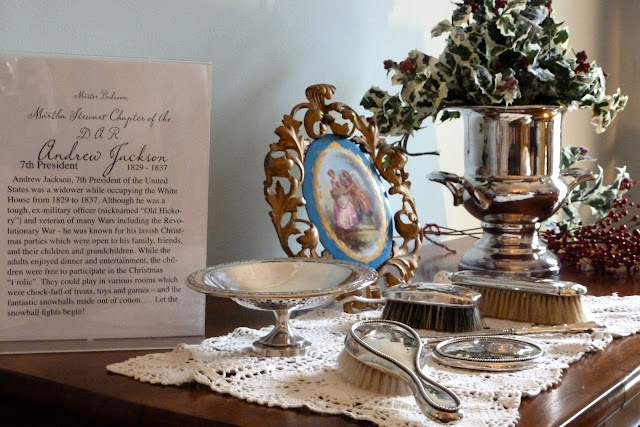 Click on the picture above to read the information panel.  President Jackson was a widower but loved to give lavish parties where children would be invited.  They could play in many rooms and had fights with snowballs made out of cotton. 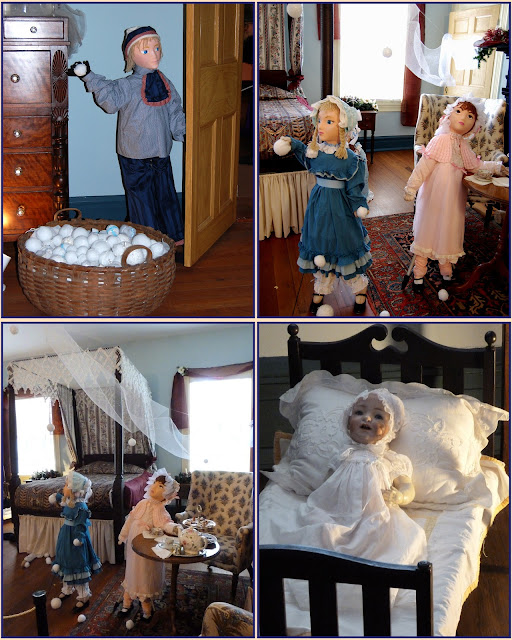 President Jackson's parents had emigrated from Ireland.  He was a tough ex-military officer.  His large plantation called The Hermitage is located near Nashville in Tennessee.  I was going to visit it when we saw our daughter last time, but I do not think they allow photos to be taken inside the house. 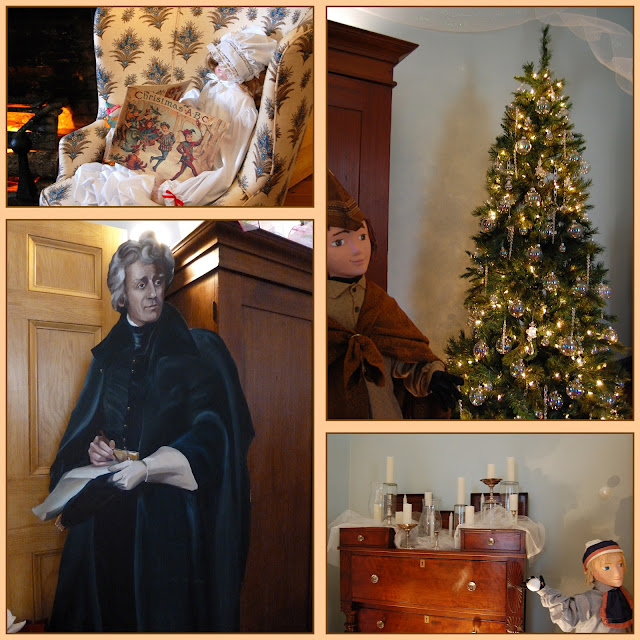 As we entered the Library we could hear a bear playing a spirited ragtime on the piano.  President Theodore Roosevelt (26th President - 1901-1909) and First Lady Edith loved dancing. 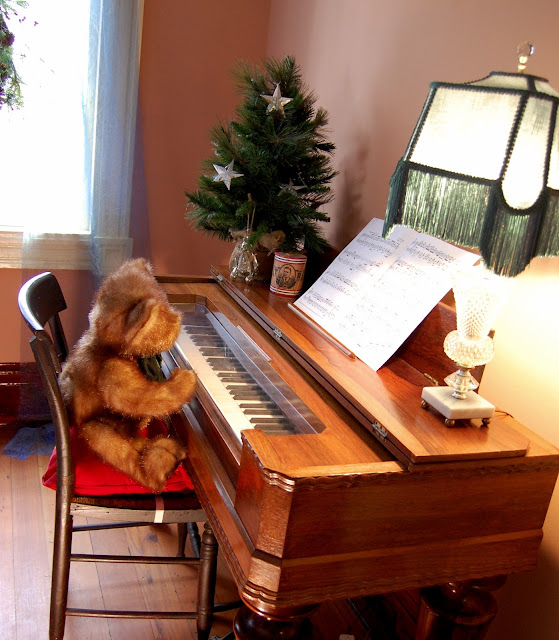 Mittie Bulloch lived in Bulloch Hall as a small child and was married to Theodore's father in the dining room on December 22, 1853.  Every December Bulloch Hall has a re-enactment of the ceremony with members of the wedding in period costumes. 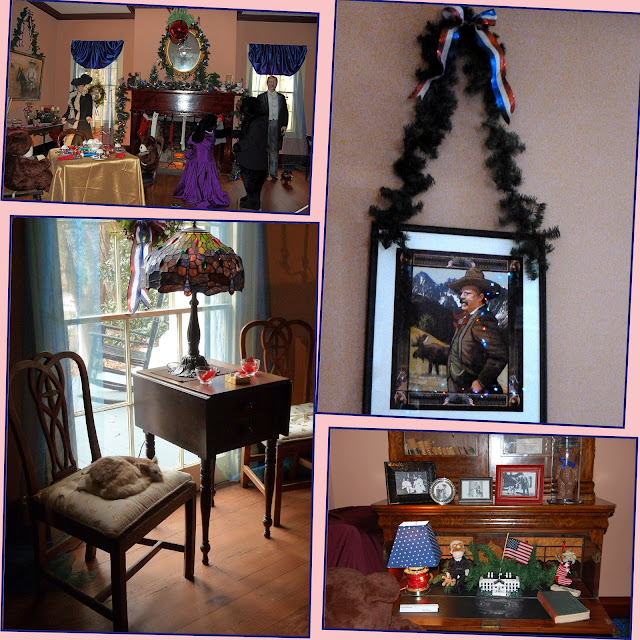 There were many teddy bears in the room.  The Teddy Bear was named after Theodore Roosevelt when, during a hunting trip, he refused to shoot a small bear. 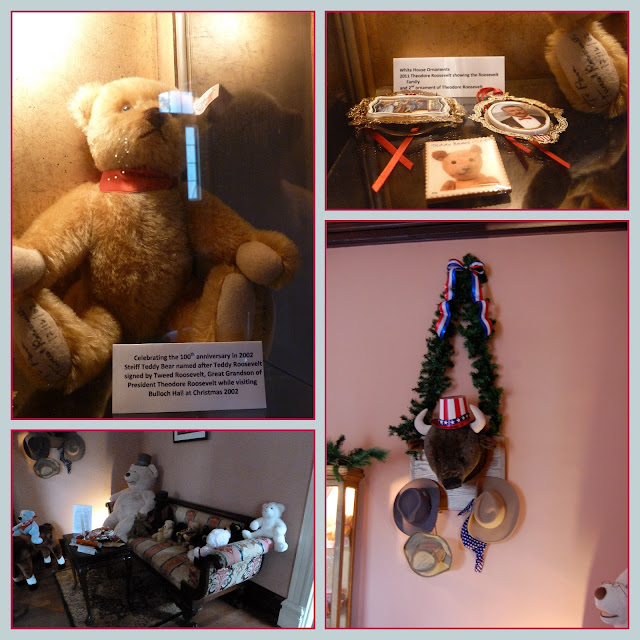 As we were getting to the end of our tour of Bulloch Hall, my husband looked at the old trees from one of the windows and decided to take a look at the garden. 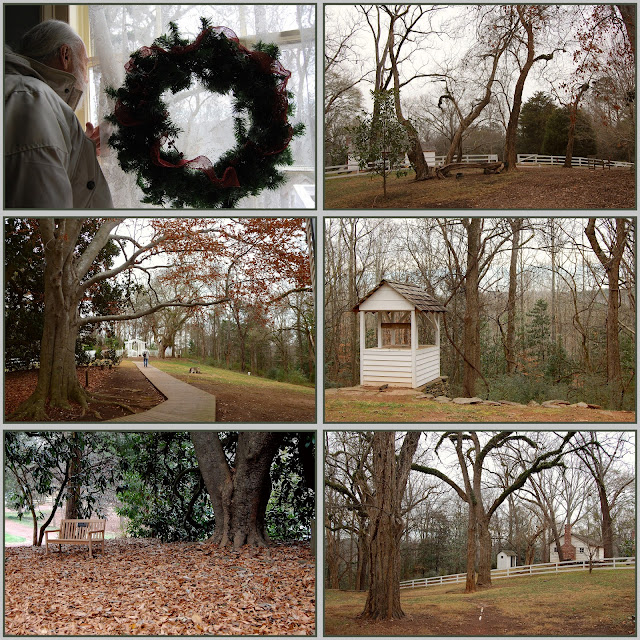 I followed him outside but while on the front porch I saw a little rose near one of the Doric column - and had to stop to smell the rose... 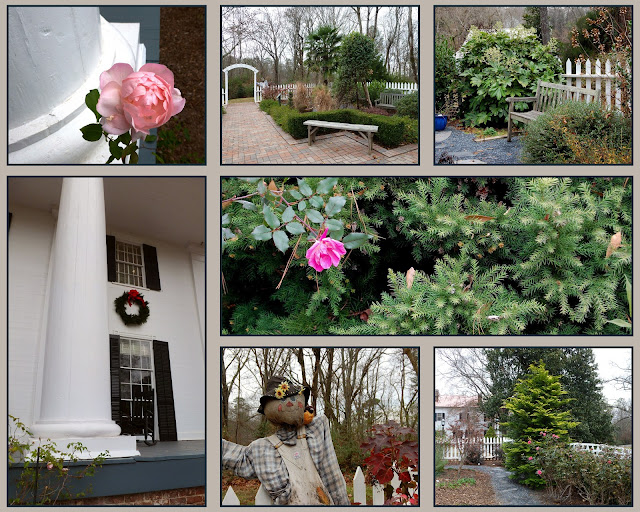 There were several roses in the garden actually and even a palm tree. 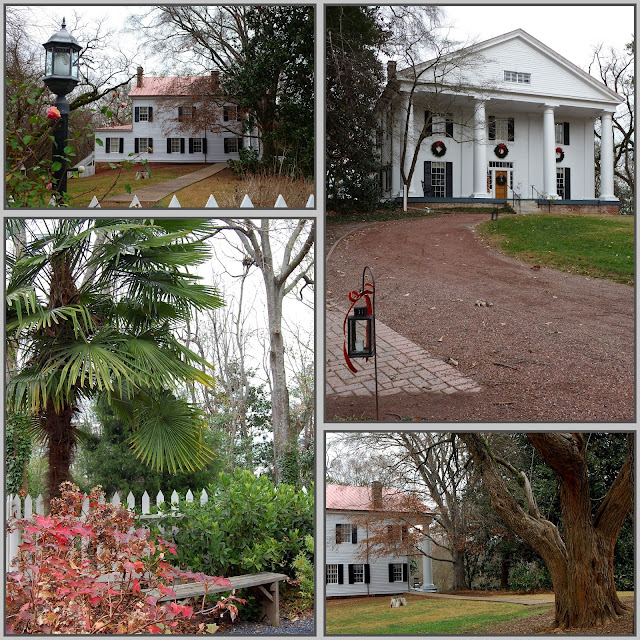 As we left Bulloch Hall we remarked that we had thoroughly enjoyed the tour.  In what theme will Bulloch Hall be decorated next year?  We'll have to wait until then. 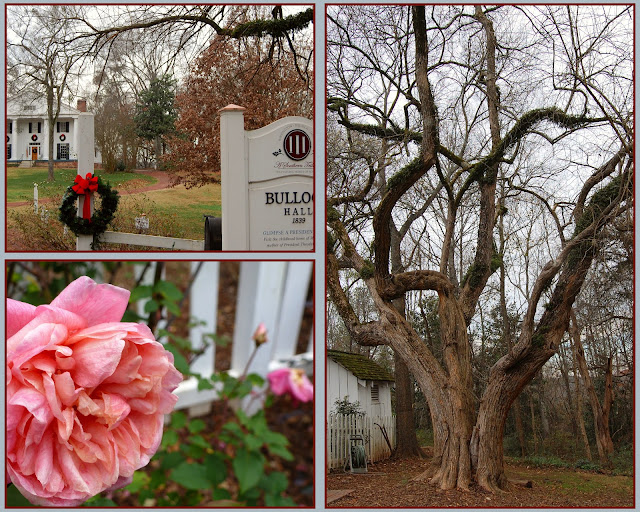 And so we left lovely Bulloch Hall, the old trees and roses.  When we returned home later that day the sun, which had appeared in the afternoon, was making an extraordinary red glow in our woods - everything looked red.  (I did not enhance the colors.) 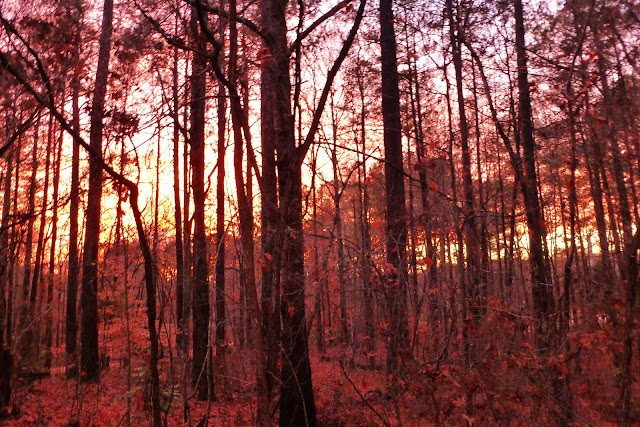 But it did not last long. 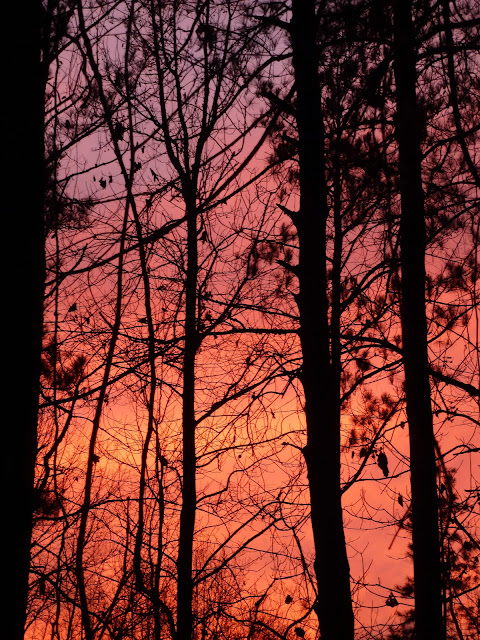 It was quite pretty but I would have rather returned to a house in the snow... as shown in the vintage postcard below. 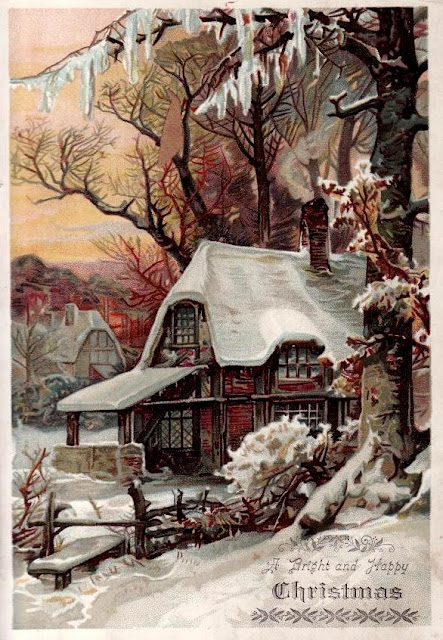 This scene would be more typical for Christmas.  December has many celebrations and so I wish you a Happy Chanukah, a Joyous Yule, Happy Kwanzaa Days, Joyous Pancha Ganapati, Happy solstice and a Merry Christmas. 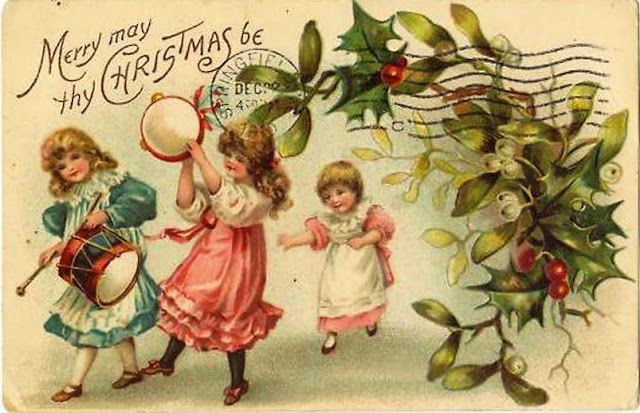 Such a great post this is! Was amazing to me to see the height difference between Abraham and Mary lincoln. Also was especially interested to hear some of the unusual pets that have been at the white house... wow, a pygmy hippo?? Hope it was not hanging out in the blue room. Also love your antique postcards. I have some that were sent to my mother as a little girl and just love them. Hope that you have a really lovely christmas!

I am so glad you continued this visit. Last night I watched a special on television about the White House at Christmas and about the families who lived their and their Christmas trees. This is such a timely post. We also saw the movie Lincoln this week, which was very good.

Joyeux Noël to you and your family.
Sam

I really enjoyed this tour, both parts! Now I know where the name "teddy bear" comes from! I didn't have any idea, and I myself have a small collection of them. and those red skies are so beautiful at the end of the day. Happy holidays to you, too, dear VB!

Vagabonde, it was great fun to see the continuation of the holiday tour, and I also agree that your rosy sunset at home was spectacular.

Best wishes to you and your husband. xo

Vagabonde, I especially liked that gnarled old tree in the gardens... Merry Christmas to you and yours! Take Care, Big Daddy Dave

This was such an interesting tour---As to Abe & Mary...they seem very out-of-proportion to one another to my eyes...
And, I LOVE Teddy Roosevelt NOT wanting to shoot a small Bear...Oh My! What he started for so very many people---including me---I LOVE Teddy Bears.
The Gardens look very Beautiful and Peaceful...
AND, those pictures of your Backyard and looking into the Woods---Well, they are Sublime!!!

A VERY MERRY CHRISTMAS, MY DEAR VAGABONDE and A VERY HAPPY NEW YEAR TO YOU AND YOURS, AS WELL!!!

The shots through the trees are quite something - well done! Those moments are treasures and we're not always lucky enough to have a camera so that they may be shared.
Bulloch Hall is quite something and the choice of Christmas display was a great US history lesson.

Lovely post and the photos blow up beautifully.
Mrs Lincoln has a look of Queen Victoria. She was tiny also.
In the UK it now seems that any flag waving around the house belongs to football fans.
I expect you have heard how our late Queen Mother was appalled when Jimmy Carter kissed her on the lips. She pointed out that only her beloved husband George V1 had had that privilege.
That is a wonderful glow you have captured - in the woods.

A Merry Christmas to you and yours, Vagabonde and a wonderful 2013! More travels to bring us more interesting and informative posts!

Vagabonde, I have so enjoyed these two posts and learned so much from them. Your extraordinary use of images and the excellence of your photographs and information makes all your posts a most rewarding experience.

A very happy Christmas to you and your husband.

Absolutely wonderful once again, Vagabonde, to get my education there in that one house. Amazing. I would think it would make a great field trip for kids during their school years. Hopefully that happens!

Marry Christmas to you and yours, and a Happy New Year.

I've been a very naughty blogger just recently, what with my internet going horribly wrong and then as soon as it was fixed, the Christmas Variety Show kept me busy and now all the Christmas prep.... however I promise to be better in the future. So Have a Happy Christmas and all the best for 2013!

Thank you so much for this incredible post. What a fabulous place to visit. It's just the sort of place we love to learn some history. Have a wonderful holiday!

We do have flags on our Christmas tree -- medium-sized smallish flags of the US and Japan. If we had the same size Brit, French and Netherlands flags, they'd be there! But then my trees and Rick's are sort of our biographies, so what happens in life gets on the tree!

Enjoyed the tour - what an impressive place. Was particularly thinking of you on Christmas Day because I saw Gone with the Wind for the enth time - and the setting of Four Oaks is so reminiscent of this post, and the countryside of course. Wish Scarlet would grow on me... but she doesn't! Happy New Year!!
Caroline

A very enjoyable and informative tour. What an extraordinary couple the Lincolns made !

I hope you had a wonderful Christmas!

Here in Sweden, unfortunately racists have started claiming our national flag as "their" symbol...especially therefore I like even more to use our flag as decoration - to claim it back as our national symbol instead!

merci! I love the places you take us, chère Vagabonde!!
love, c!

Thank you for the beautiful post and delightful photos! I wish you too a very happy new year. I have just returned from Australia and a bit jet-lagged!

Thank you for this beautiful Christmas post and the delightful photos! I wish you too a very happy new year.