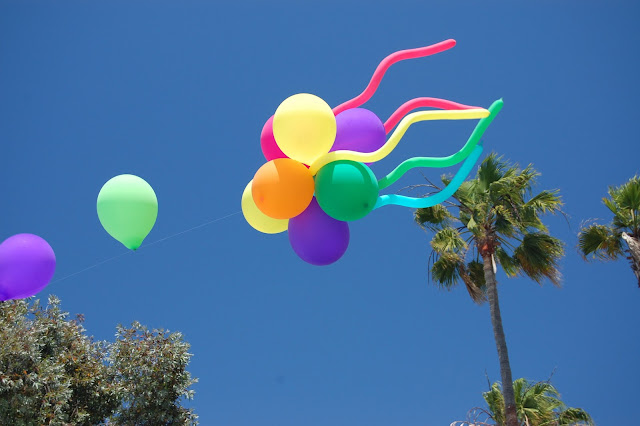 Traveling in nature is one of the great joys we have.  We can watch a sunset over the sea, snow on a mountain and brilliant flowers in a garden.  Experiencing the splendor of nature brings powerful feelings I think, feeling of joy, of gratitude even for being part of all this magnificence.  I'll share some of my pictures below such as a sunset over mountain in Alaska. 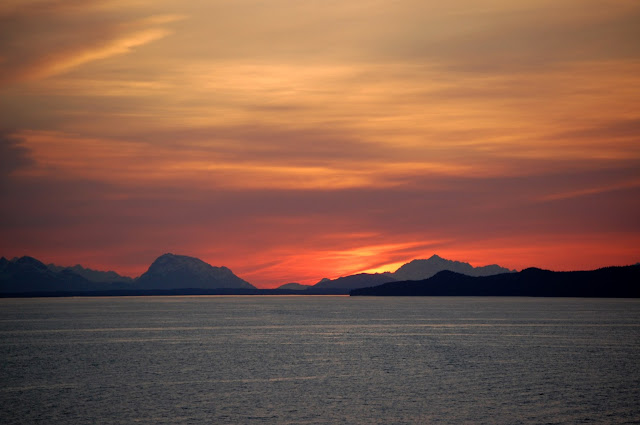 But we are also attached to the place where we spent our childhood and young years, and we carry it with us. Until I was 21 I spent most of my life in Paris, the capital of France.  It is a large city where I felt at home because it was home.  So I feel at home in large cities also, in any country.  In a city you encounter a diverse range of people, from many backgrounds.  The sounds, the architecture, the smells can be so different and exiting - the food too.  The culture, the arts - there is no monotony.  You can find a quiet place in a city too, like this bench I found in a park. 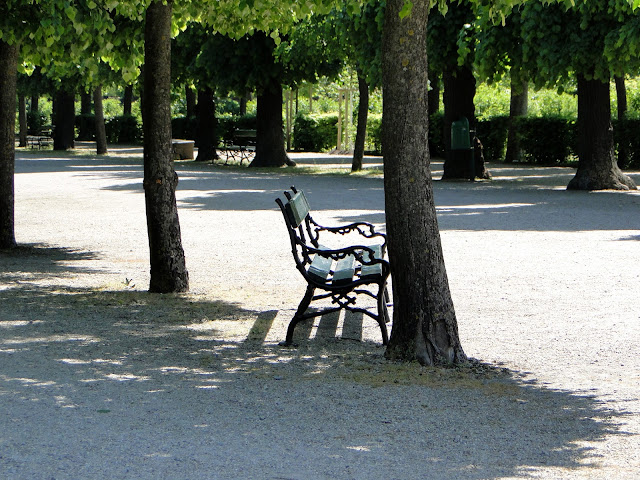 Or enter (and exit, as my husband is doing) the CNN Center in Atlanta with its quick pace. 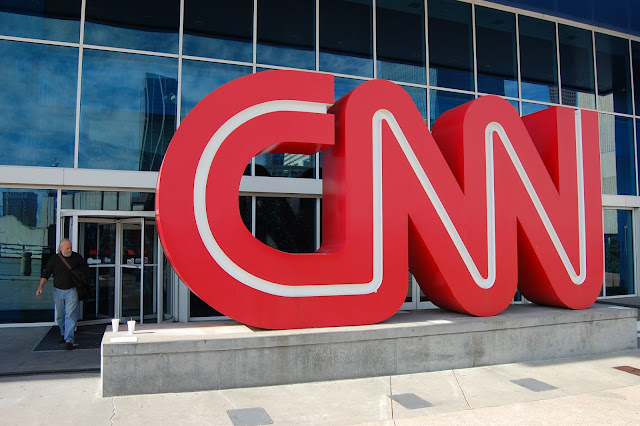 There is such a diversity of happenings in a large city - you may be witness to unpredictable gatherings, such as these two men below we saw in a busy street in Oslo, Norway - one acting like a statue, the other wearing a pink dress. 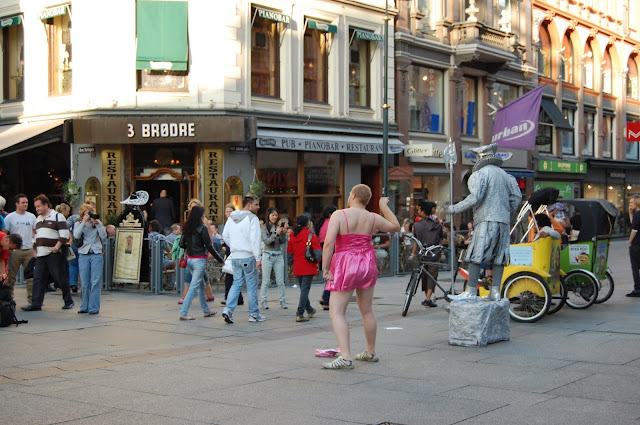 Or you can feel part of a happy event such as the bride answering my wave in a street of Marseille, France. 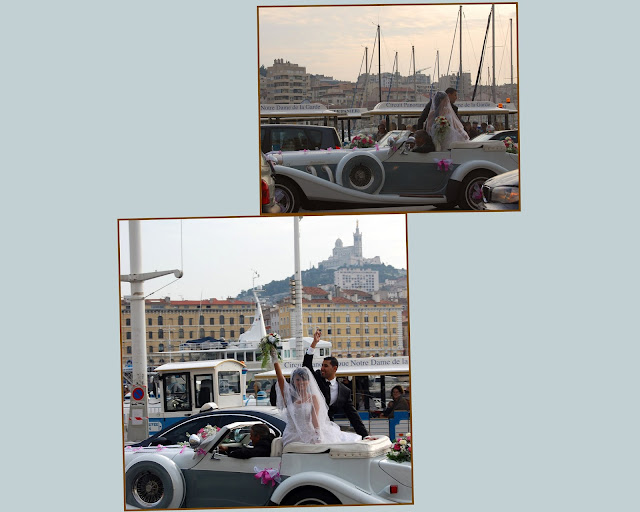 Or watching another bride and groom walking by in the Montmartre hills of Paris. 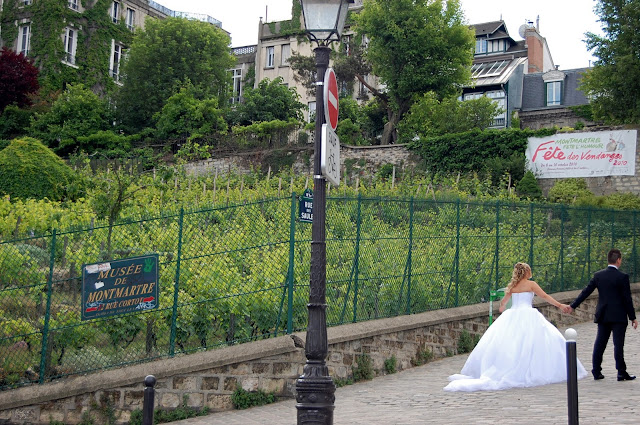 You can study appealing architecture, such as the tall buildings in Manhattan below 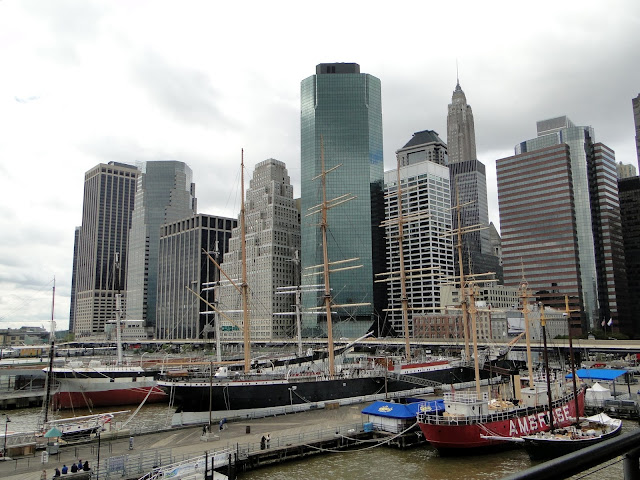 and the professionals with their vehicles coming to peoples' assistance anytime they are needed. 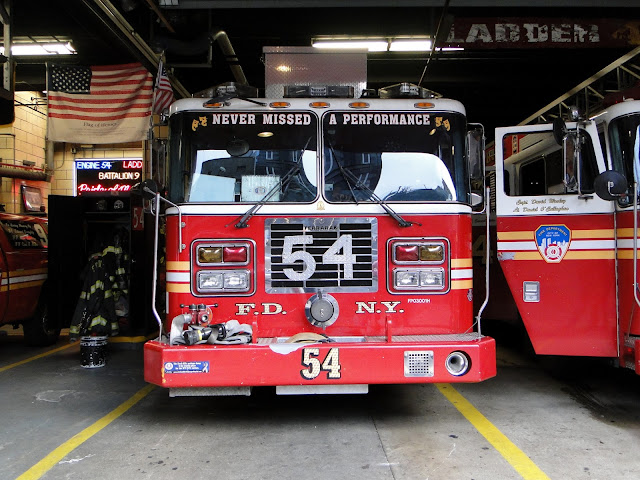 Or spend a peaceful evening on a roof garden in Tunis, Tunisia where we could smell the flowering jasmine. 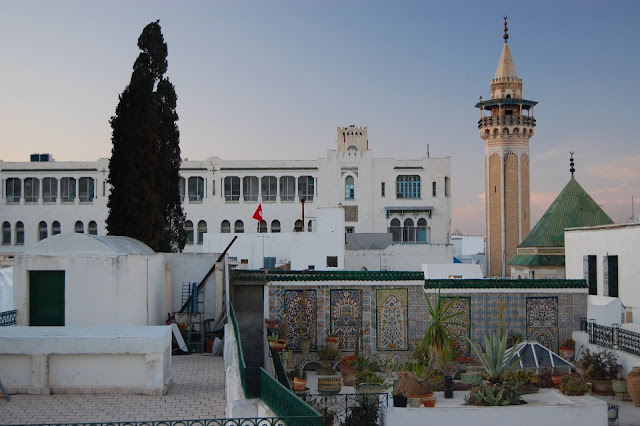 Or you can stop in the middle of a bridge to watch a boat float by, as we did a Sunday morning on the Danube River in Vienna, Austria. 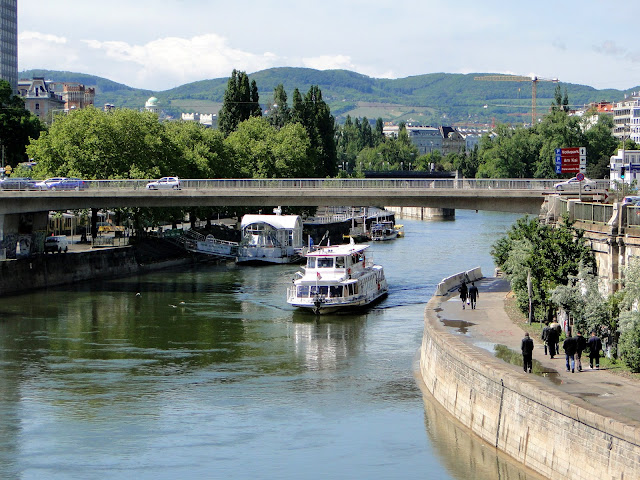 One of my favorite things is to be on a high point and contemplate the city below, such as Los Angeles from my friend's Naomi's home in the hills of Hollywood 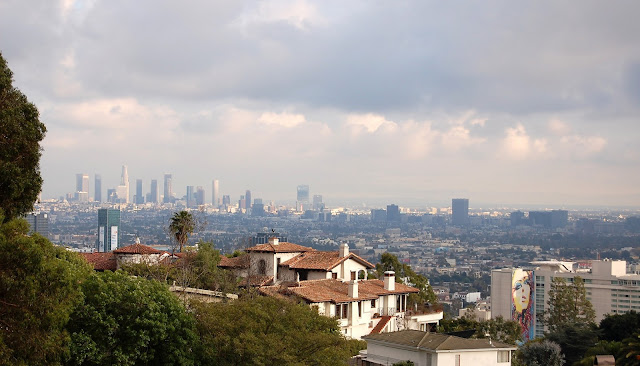 or observe the port of Oslo on a overcast day. 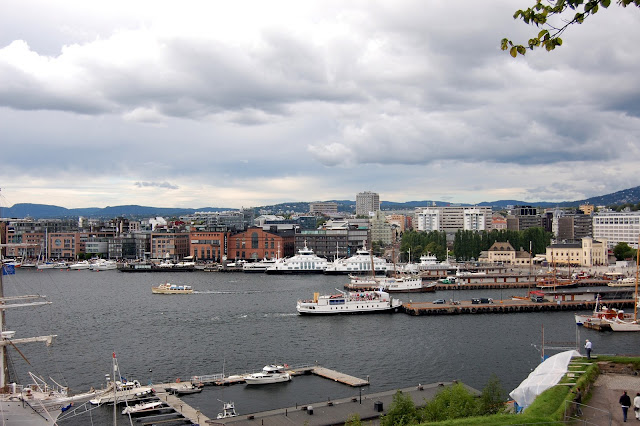 And my favorite view, of course, is the view closest to my former home - the Paris panorama from the Montmartre hills near the Sacre-Coeur.  But I embrace all the cities I have known. 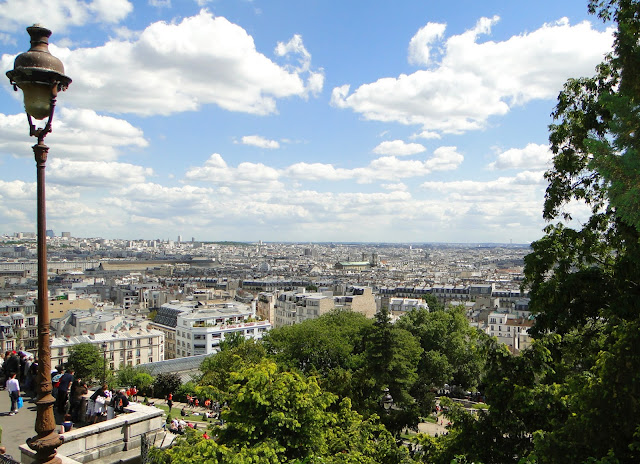 Below is a poem by Andree Chedid (1920-2011.)  She was of Lebanese descent and born in Cairo, Egypt (another city I like, home of my late aunt and cousins.)  She studied in a French school and in an American University.  She spoke French, English and Arabic.  She moved to France with her husband in 1946 and they both took the French nationality.  For over 50 years she created a body of work in France that includes 40 volumes of poetry, novels and plays.  She won the Goncourt prize for literature and many other literary prizes.  Below is a picture of Cairo, Egypt. 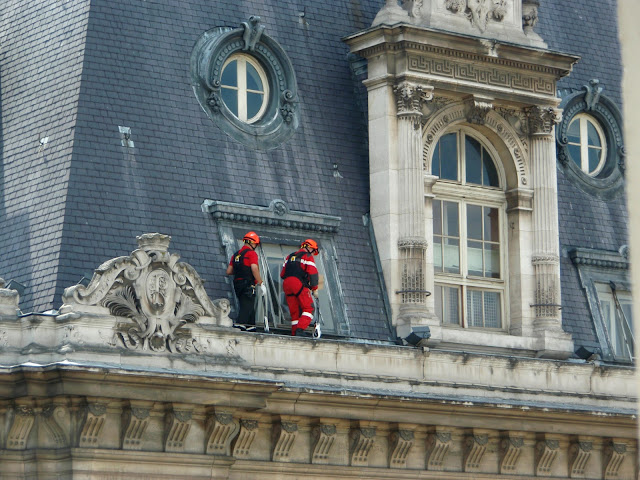 Window cleaners in Paris in May 2011

The Song of cities

I cling to the pulsations of cities
To their animated existence
I breathe in their greenspaces
I slip into their alleyways
I listen to their people from everywhere
I have loved the cities like Cairo or Paris
They echo in my veins
Stick to my skin
I could not live without
Being fundamentally :
Urban.  Andree Chedid

Paris seen from the roof tops by Robert Ricart, French born in 1948

Another truly beautiful post. I am not urban for preference, but some of these views and Andree Chedid's poem could almost make me think about changing my allegiances. Thank you.
I hope your blogging break is full of pleasure.

Absolutely gorgeous photos and heart-warming commentary. I've walked many of the places where you've walked and could relate to so much. Thank you for these steps down Memory Lane.

A beautiful juxtaposition of places, times, and events in your life, VB. I enjoyed it immensely. :-)

What a Beautiful post! I LOVE Cities and I love the country, too....And, so very nice to see my view included in your lovely pictures! Hope you are enjoying your Blog Break, my dear.
This post was a real treat!!!!

What a beautiful poem, especially in its original language (did I tell you that my daughter is learning French in school and we are talking French with each other a small part of the day so that she doesn't forget over the summer?). I love cities as well - especially Cairo! - but I do feel tired and exhausted after a few days and need to get out into nature. Your photos of Paris made we want to go there again - it's been too long. We had hoped to go this summer, but couldn't. So we're going to BC instead - my daughter would like to tour the UBC Vancouver campus, so that's one stop!

I'm with the others - another beautiful post. I can't stopping looking at the Danube.
Sam

Vagabonde, this post of yours really went straight to my heart.

You expressed many thoughts that I share, and I loved seeing every photo.

When I reached the Chedid poem, I stretched my vanishing fluency to read the French, and loved it. On reading the translation, I found that i had caught the original language well.

Cheers to cities around the world and to all who dwell in them. xo

Vagabonde, You certainly have traveled a lot! While I would like to visit some of the cities you've pictured, I much prefer the countryside and smaller towns. I'm comfortable enough in large cities and I've been in most of the large US cities plus Toronto, Vancouver, Mexico City and Sydney. Still, I/we love the peace and the beauty of the countryside. We did like living in Chicago...but it's just too cold and too expensive for us old retired folks! Beautiful photos! Take Care, Big Daddy Dave

Wow! What a fantastic post! I related so much as I love both cities and the great outdoors. I also love little villages and towns with their absolutely unique personalities and local specialties.

Greetings from Polperro, Cornwall. I hope you're enjoying your blogging break and your travels.

What a wonderful collection of photos you share. I give you in return, my smiles!

What a wonderful post! Like Frances above, I "stretched my vanishing fluency to read the French" and found that I had caught the original language only fairly well!

What a marvellous post! I love the city views and the fascinating contrasts and am glad to say that I could read the wonderful French poem and find there was only one word I didn't know. I must be improving. :-)

I am a country person at heart but I admit that there is a lot of beauty in cities :)

A wonderful post and it was lovely to take this quick trip around the world with you.
It must be fantastic to have some many memories and images from the places you have been.
Sarah x

Beautiful, beautiful, beautiful. Vagabonde, you are named well. The synthesis of photographs and prose and poetry could only come from one as well traveled as you. Thanks for enriching our lives with this post.

Karin B (Looking for Ballast) said...

Ahhhhhh, Vagabonde -- I ♥ you so. This post spoke to my soul. Thank you!

Also, I adore your photography so much. Thank you for the vicarious travel, and also the *fantastic* poem. I enjoyed reading that so much. I even read it aloud to myself in French. :-)

Hugs from Denver (and you can come and photograph here sometime, now that you have a friend here ;-) ).

Vagabonde, I love your photo of Oslo port. I know you took it from the Opera house roof, did you? I did the same photo and video. I love this city, as you do.
Lovely poem in translation.
Have a nice week!

Seems that bloggers are usually nature lovers. Seldom do we find a blog post singing praises to urban beauty. Indeed, cities can be just as awesome. I was born in Hong Kong (then a British Colony) and spent my first 15 yrs. there. So I can understand the vibrancy of a metropolitan centre, albeit at that time HK was nothing near to today's allure. Once I moved to Canada with my family however, I began to appreciate nature and fell in love with her. I wish I can live in both worlds at the same time.

A beautiful post, Vagabonde, beautifully illustrated. A real pleasure to read.
Thank you for visiting my blog and for your kind comments.
I look forward to reading your blog regularly: it feels like a gift.

Love the pictures and your words. You draw me into the vibrant and exciting world of cities. paris is one of my favourites. Although I feel alive in cities I feel even more alive in the quietness outside the city. Oh the hole world is a great place when you see all your pictures. It all has a part

Hello Vagabonde, I've been away from reading and commenting on blogs for several weeks. Today I return to one of my favorite blogs and discover that you are providing for us a collage of places and events and people that you have met and enjoyed during all your travels. I find this wholly enthralling.

I'm wondering if those are the "big boats" in the docks of Manhatten? I remember something about the big boats--the clippers--that did something along the Atlantic Seaboard a year or two ago. They so remind me of the books I've read by Hermann Melville.

Thank you once again for expanding my world. You bring such a positive attitude--such an embracing of life--to your traveling. You must be a joy to travel with. Peace.

So wonderful to see these pictures especially the ones of Paris though, my favourite city without a doubt. I liked too so much, the poem by Andree Chedid, I think I prefer it in French. Thank you for letting us into the words and images of your life.