Nice and the Tour de France 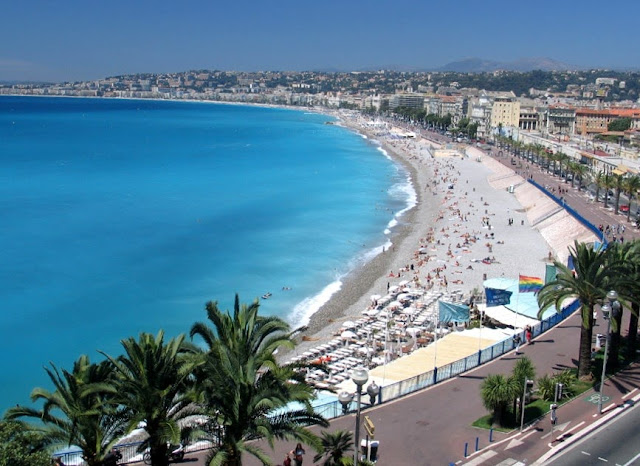 As mentioned in earlier posts, when I was a small child and staying at my grand-parents for week-ends or holidays, my grandfather, to keep me busy and amused, would give me a small suitcase filled with vintage postcards.  I spent many hours looking at these old postcards.  A couple in particular kept my interest; they were postcards from Nice, the city on the Riviera and I still have them now (and they look well used!)  One was a postcard of the "Promenade des Anglais" (The English Walk) that had been sent by my great-aunt to my grandparents in 1935 and the other was a woman from Nice wearing the traditional Nice costume - must have been from the same period.  Since then I have collected more vintage postcards of Nice, but I'll include them in future posts.  Here are the postcards from my grandpa - 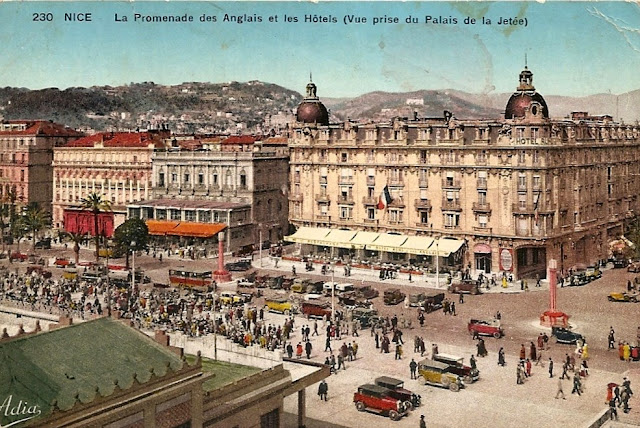 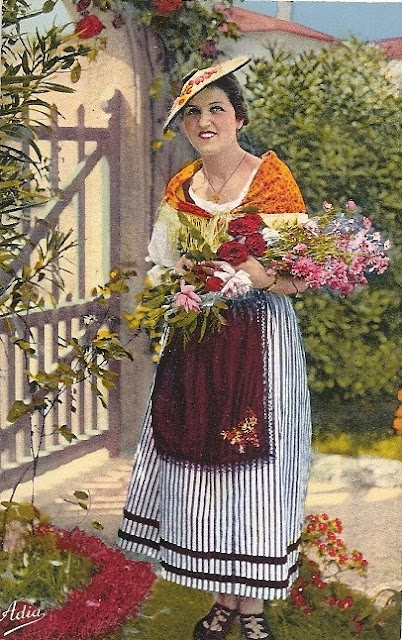 The first time I went to Nice I must have been 12 or 13.  I had been staying the summer at some of my grandparents' friends in Vaison-La-Romaine, a small town in Provence.  Mother came to get me and we traveled around the region all the way to Nice.  I was so excited to see the town I had dreamed of for so long.  We took excursions buses to small towns close by such as Vence, Vallauris and Grasse (the perfume capital.)  But I did not take pictures then.  In May 1968 when my husband and I went back to France we drove around and went to Nice with my mother.  I have some old slides from that trip in the South of France in our rental car.  Below is the Promenade des Anglais in 1968. 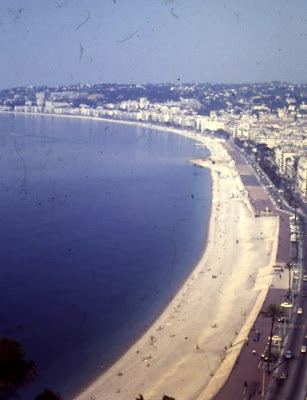 Below are some more pictures taken around the Nice area during that trip.  The picture on the right shows my mother and me washing some fruits in a fountain.  The top in the center must be of Vallauris potteries in Provence and the bottom is a panorama of Nice. (Click on collage twice to embiggen.) 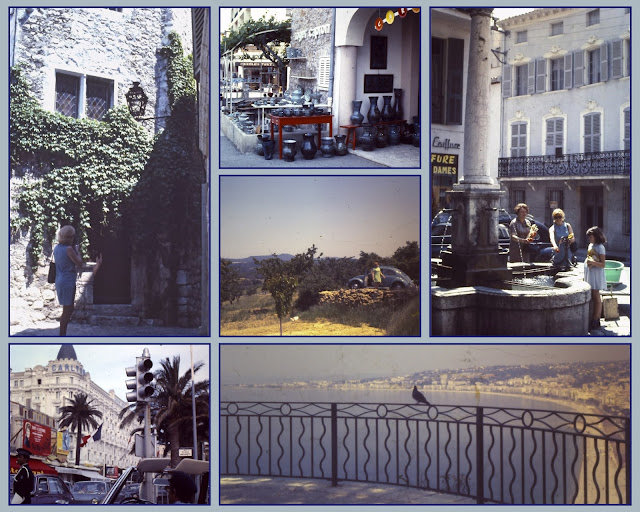 Since then I have been to Nice several times and last year, in mid October 2012, my husband and I stopped on our way back from Venice, Italy.  We rented a small studio and stayed there a week.  The panorama of Nice has changed a bit, but not too much.  Below is the Promenade des Anglais and "La Baie des Anges" (Angels Bay) in October 2012. 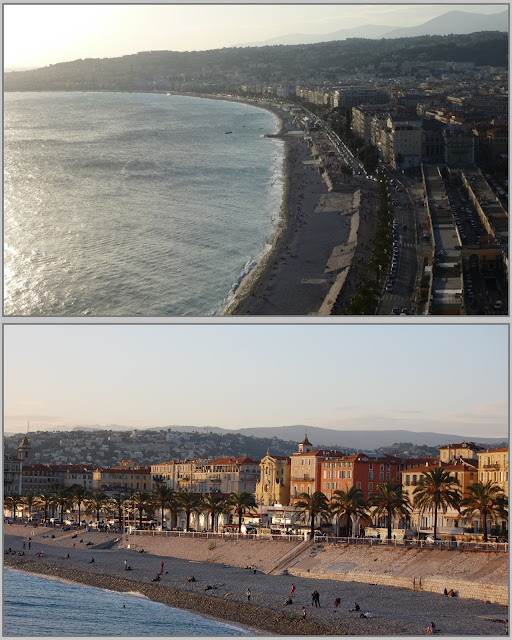 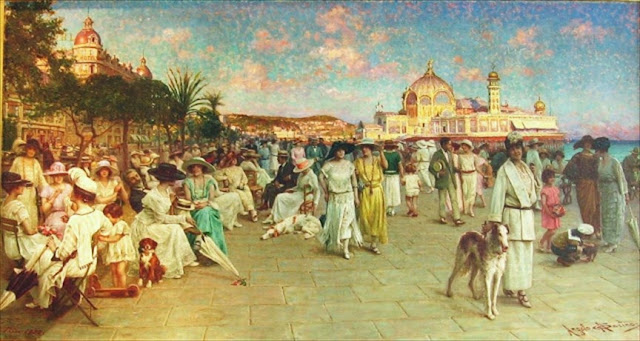 After Paris, Nice is the next city that brings the most tourists to France.  It has 350,000 inhabitants and with its suburbs more than one million.  It borders the Mediterranean Sea and its area is 80% mountainous.  It is an old town, called Nikaia by the Greeks in the third century BC.  In closer history Nice became French in the mid 19th century.  Napoleon III helped the Italians militarily and financially to fight their Second Italian War of Independence against Austria.  Nice and Savoy were given to France as a territorial reward from Italy.  Nice is a dynamic city with many festivals such as the Carnival of Nice, Nice Jazz Festival, etc.  There are 19 art museums such as the Matisse Museum and the Chagall Museum.  Nice is located very close to Italy as shown on the map below.  It is also a fast train ride to Monte Carlo, Monaco. 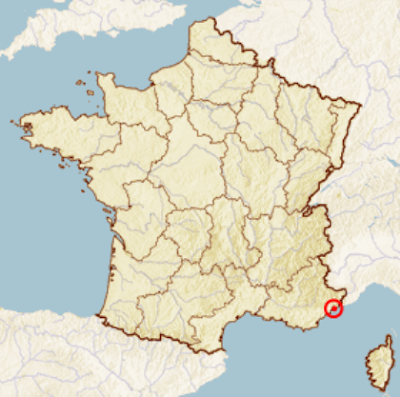 This year is the 100th anniversary of the Tour de France.  The Tour started in the French Island of Corsica then the cyclists took a ferry to Nice to compete there.  Below is the route of the Tour and photos of the Tour in Corsica. 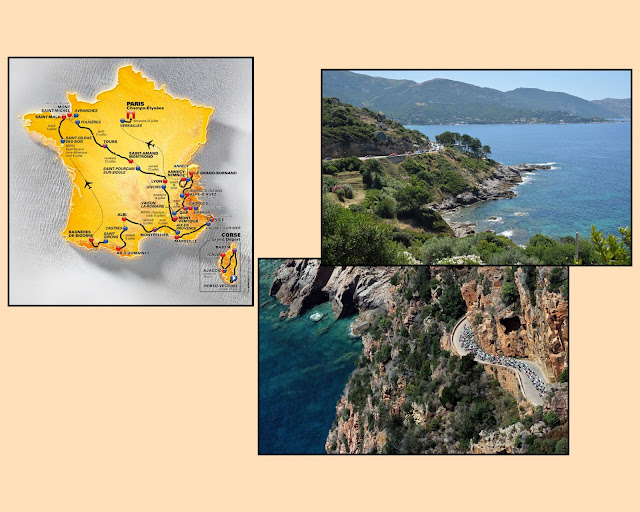 I certainly was glued to the TV to watch as the Tour biked on the Promenade des Anglais and around Nice.  Simon Gerrans of Australia won the Yellow Jersey in Nice (i.e. the fastest time for that stage of the Tour.) 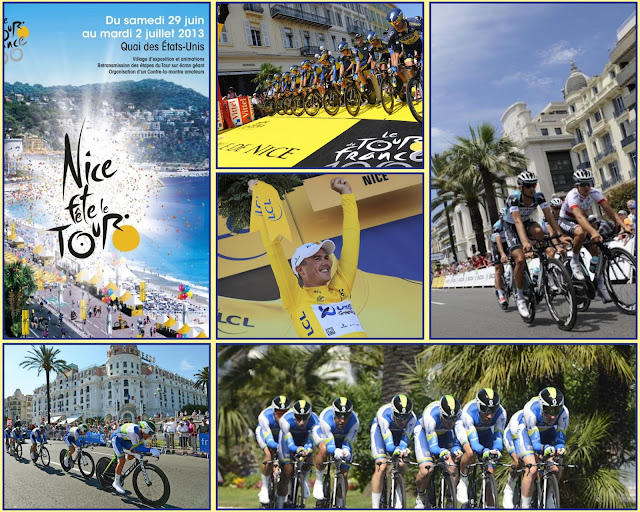 I love your vintage postcards and think of you every time I see postcards in an antique store. I now see to where you developed your love for these, and how awesome that you still have these cards you had when you were a girl!

I too loved the vintage postcards. I think they are especially nice when they have a family connection.

Gorgeous post. As always.
The Tour de France has been on our television here most nights - not for the cycling but for the glorious scenery.

A wonderful display of postcards and slides! I learn so much from your posts. I have collected many 19th century stereographs of France and they furnished much insight, but your photos are bringing me up to date. My compliments and thanks!

Bonjour Vagabonde. Long time, no talk to! I, too, posted about Nice just last night. Your story is the perfect complement, and it taught me a thing or two about my favorite French city. Loved looking at these old postcards! What a beautiful city this is. I can tell it has changed a lot since 1968, but they keep improving it, and it has certainly turned into a very modern place. Can' t wait to see more in your upcoming post. A bientôt, Veronique (French Girl in Seattle)

I wonder why places always look as if they were nicer in the old days than now. It might be because of all the traffic signs, road markings, and cars that there are today, I just can't find them picturesque although no doubt people in 80 years time will!

I enjoyed vintage postcards as a child too, looking through Victorian ones at my grandmother's house and imaging her as a girl.

Nice is such a charming city. We've been a couple of times, always in the summer around July and it's been quite hot. The Promenade des Anglais is my favorite, plus the old market with all of the pretty vegetables. Love the old photo of the Promenade, but most especially the Impressionist painting. Imagine having such a gorgeous painting in your home. I wouldn't be able to take my eyes off of it.
Sam

I'd seen Tour de France since many years. I liked watching it and the wonderful views, Nice is beautiful city, I'd love to visit it!
Thank you for sharing your recollections!

I started a postcard collection when I was in my twenties and I thoroughly enjoy going back through the cards and seeing the sights.

Several years ago (okay, decades), we went to Nice and I've dreamed of being able to go back to spend time in the area. Sadly because I still work, whenever we go to a region, I'm always in a hurry and one day I would love to be able to take my time. Spending a week there sounds heavenly.

Loved all the pictures of Nice and the Wonderful Postcards, too. I was in Nice in 1969---even had to go to a Dentist there....(UGH)...And it is quite a beautiful city....! There is nothing like the South Of France...I spent three weeks in Cap D'Antibes and all the neighboring towns and villages and I LOVED it!!! It's so wonderful to see your pictures and read your memories!

I just adore these sharings of yours.

The first time I went to Nice, I remember the smell of pine, thyme and rosemary when I came out of the train station. I haven't been there in many years but I am sure I would still love it. And the back country is so incredibly beautiful too!

I love Italy. I have been there once and would love to go back! The postcards are beautiful! Great post! ;o)

Nice looks like a lovely place. I always enjoy seeing your old postcards!

Someday I'll make it to the Riviera... sigh!

I've been thinking of you as I've watched the tour. Wasn't the finale spectacular? I was taking pix off the TV set but of course they'll have all the lines on them (this isn't a digital set). It was definitely a terrific tour and wonderful way to celebrate 100!

Vagabonde, Another beautiful and interesting blog! Our daughter has been to Nice, the Riviera, Monaco...and Paris and Lyon. She loves France! Our son and his family lived in Brentwood for awhile too... We've been to Loveless Café 3 times but we were pretty disappointed a couple of years ago. Perhaps its too well known and too 'popular' now! Thanks for the Brunch tip re: Mere Bulles... Take Care, Big Daddy Dave

I love your vintage postcards!

I delight in vintage postcards --ephemera of all kinds-- and the special view they furnish of other places, other times. Thank you for sharing these!

These are such beautiful postcards. My daughter used to collect them. Every time we'd go on a trip, she'd buy them. She also bought them at antique fairs. I wonder where they are now.

Oh, do you have photos of Vaison-La-Romaine? We went there in 2010, to revisit my son's "Music Studies Abroad" summer school location. He was there as a 15 yr. old some years earlier, and performed in a concert there too, played a Chopin Ballad in the 13th C. Chapel in the north side of the town. Do you know it? That was a most memorable experience for me. We stayed in Avignon and took day tours out to the surrounding area. I'm so glad you've had wonderful memories as a youngster there.

The postcards make me think of Scott Fitzgerald and all the great writers and artists who have lived around there.
Sadly I never made Nice but did go to Cannes and was thrilled to see Kirk Douglas walking towards me.
He just smiled graciously:)

France is so gorgeous... it's hard for me to believe you swapped all that for the USA. Nice has 19 art museums - how fantastic.

I know my daughter would love to travel and paint (and visit) Paris ... and I must show her Nice.

As always, I love your life's travels and explanations.