Marietta Art in the Park 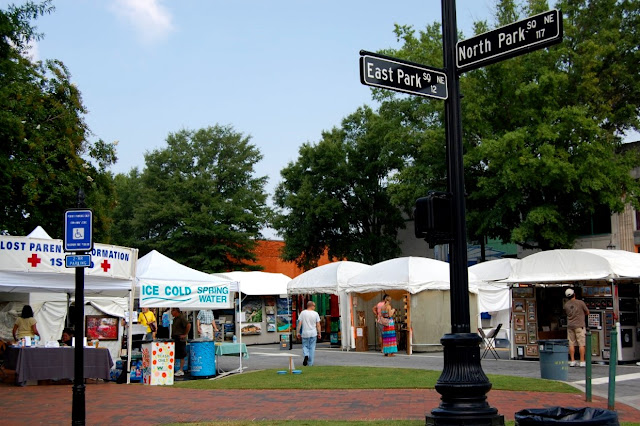 There are many Labor Day weekend festivals in the greater Atlanta area.  We went to two of them.  On Saturday August 31, 2013, we went to Decatur, Georgia to the Book Festival - and I'll have a post on it soon.  Yesterday, Sunday September 1, 2013, we went to the Marietta Square Art in the Park.  I wrote two posts on this art festival already, one in 2010, explaining about Marietta and the area, click here to read it, and one in 2012 - click here to read it. 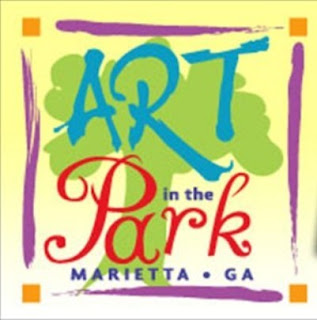 But first, thank you to all those who read my last post and gave their opinion on whether a movie "based on a true story" should be more than half true or not.  There were different viewpoints and I like that.  I do respect everyone's opinion and feel good that my blogging friends felt they could agree or disagree freely on my blog.  Now back to the festival.  We arrived at the park before it opened at 10 am.  There were few people then.  By the time we left around 12:30 pm there was a good crowd of people, children and dogs.  (Click on collage twice to embiggen.) 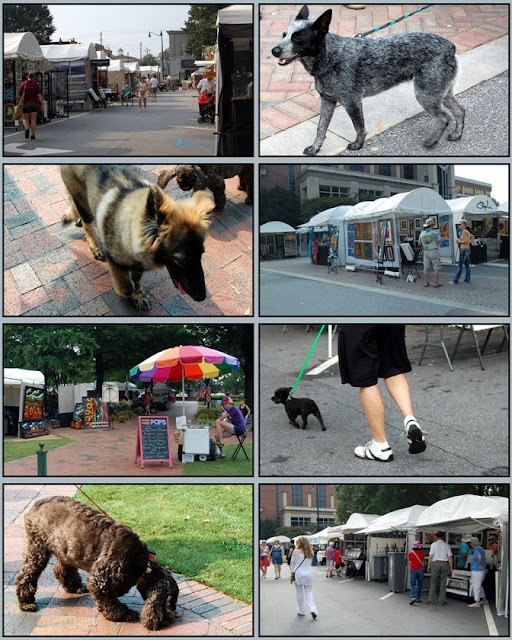 As I mentioned in my earlier post the Art in the Park festival in Marietta has been an annual event each Labor Day weekend for 27 years now.  The first festival included 32 artists and now there are 175 artists chosen from many areas of the US as well as from Marietta and greater Atlanta.  All the pieces exhibited are handmade originals  It is a pleasure to walk in all the booths and look at the extremely varied art and talk with the artists.  First my husband stopped at a wood carver, Lee Smith from Landrum, South Carolina, and admired the toothpick holders with the bearded old man hand carved on them.  I purchased one for him. 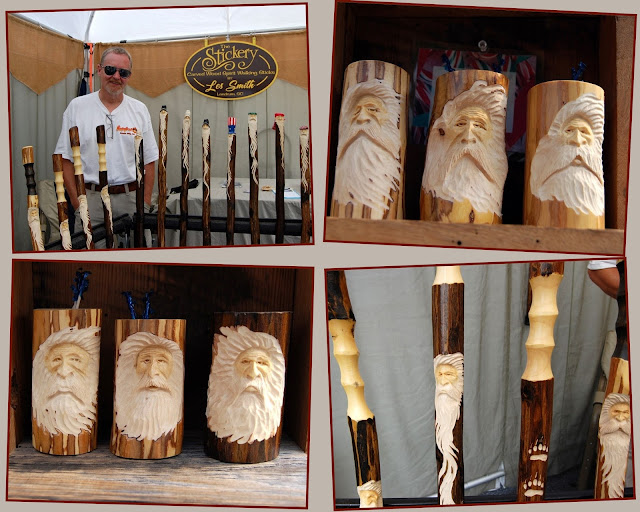 Some handsome rocking chairs were shown with the proceeds of the sale supporting charities.  The chopping blocks shown on the bottom right hand side picture below are handcrafted by Roger Grimes of the Kennesaw Woodpecker. 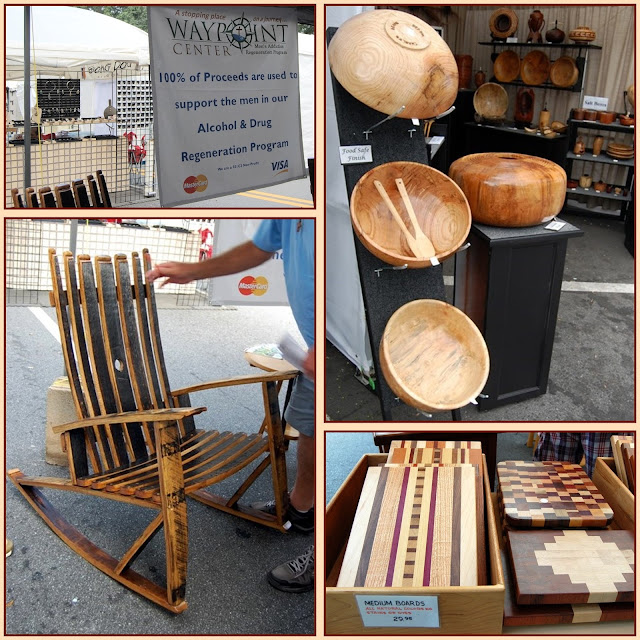 I talked for a while to a professional photographer but forgot to take pictures of his booth - many artists actually forbid picture taking.  There were several outstanding art photographs on display like the Mississippi Delta & Blues Collection by Ron Anton Rocz. 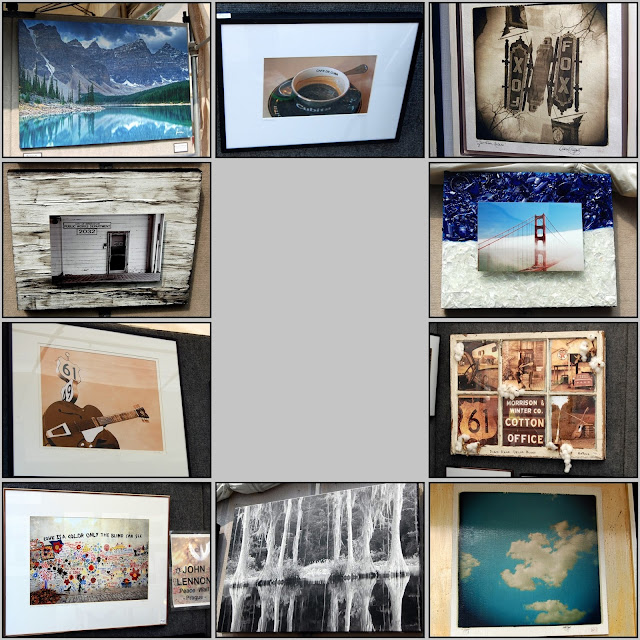 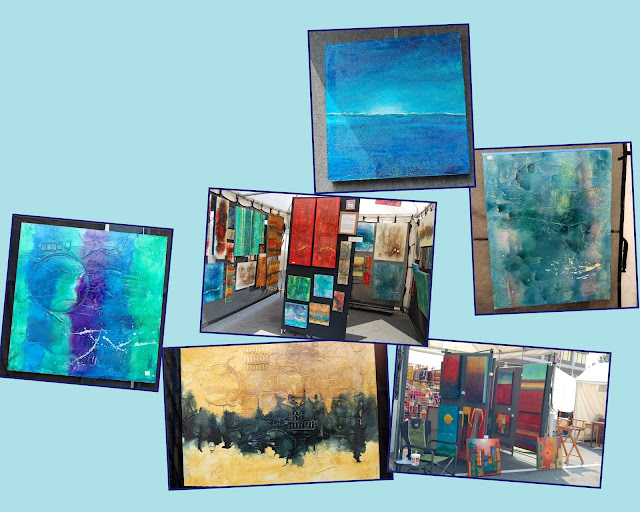 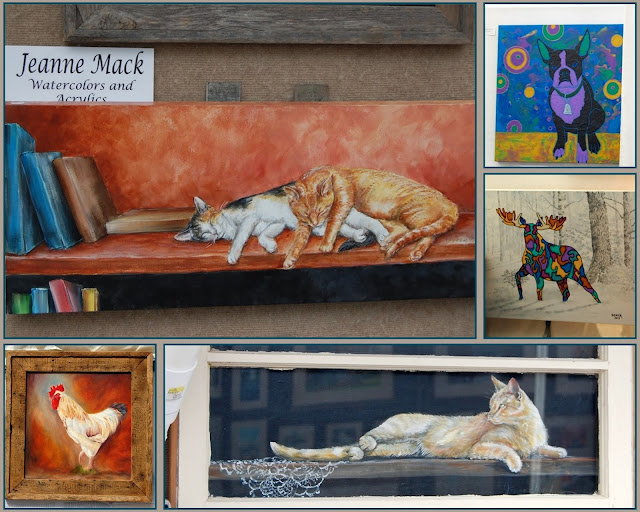 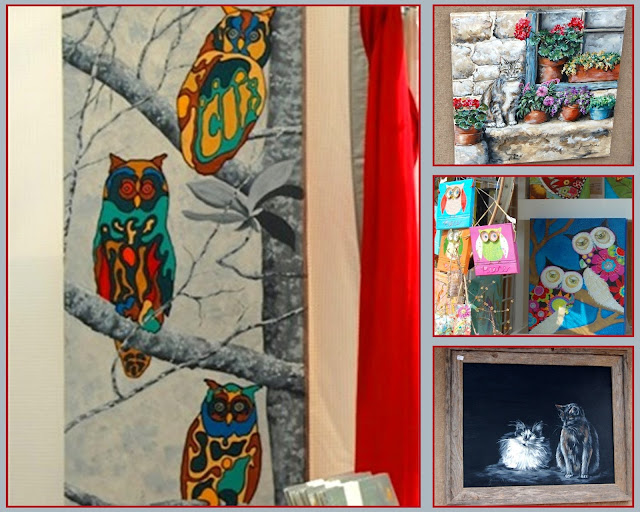 So many art pieces to enjoy!  Entering the booths the eyes don't know where to look ... 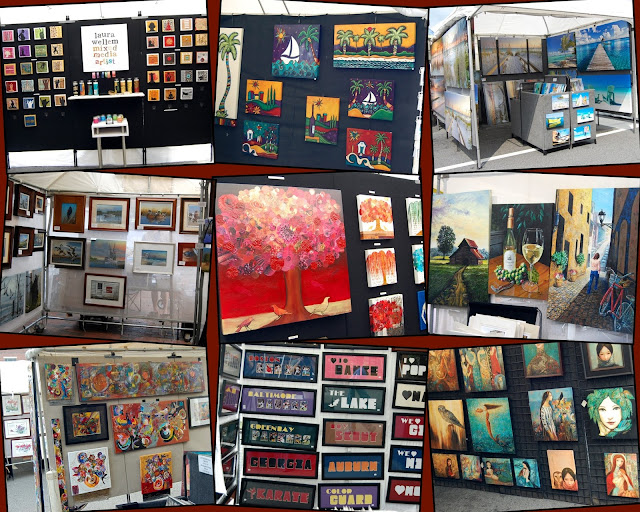 When we arrived at the square most people were still eating breakfast in the restaurants facing the square.  But after a while the ladies started coming into the clothing booths 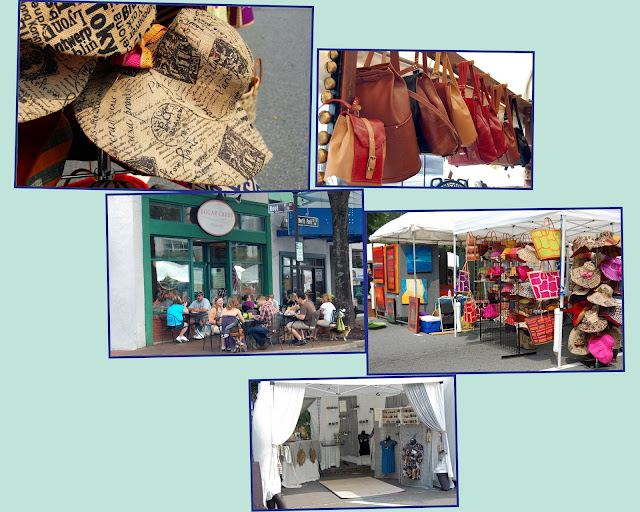 and the jewelry booths. 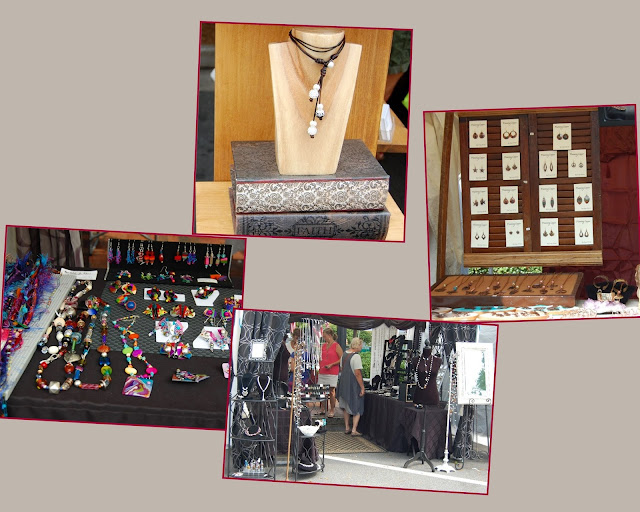 I stopped and admired the work of a husband and wife team of glass artists from Waynesboro, Georgia - Mickey and Madeline Art Glass.  Their glass pendants are unique in shape and color.  I talked with Madeline - she told me her husband is the glass blower.  They craft their pieces in rural Georgia among their goats, chickens, dogs and garden. 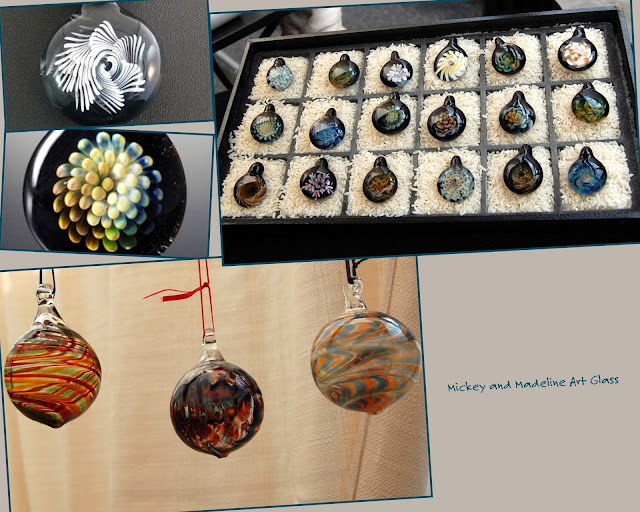 Oriental art was exhibited too - in watercolor as well as in nature with gorgeous Bonsai trees. 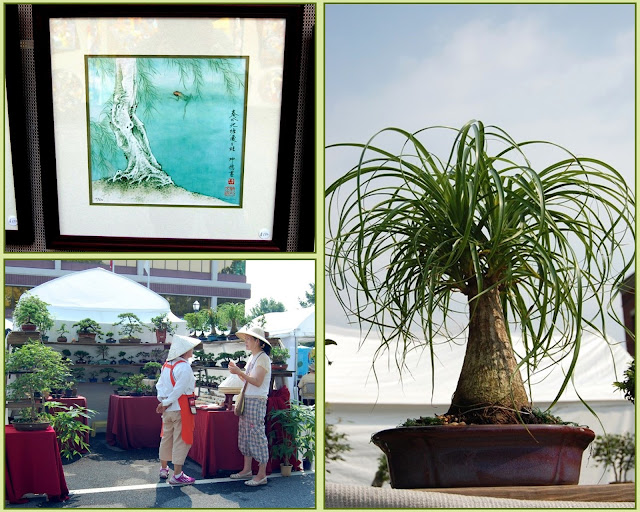 It was quite sunny and light reflected through the beautiful stained glass pieces hanging in several booths. 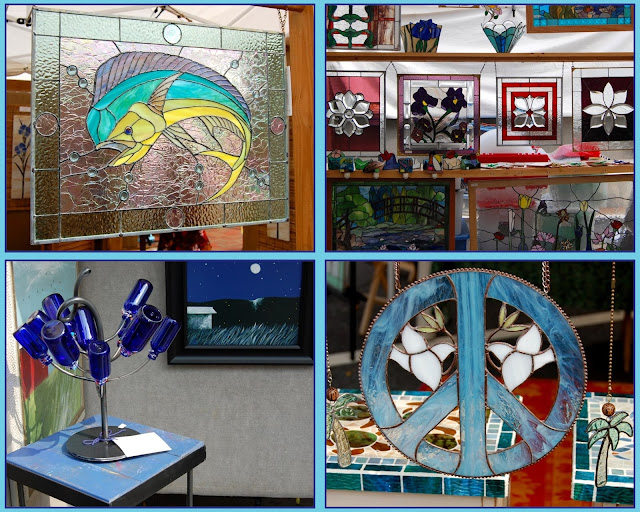 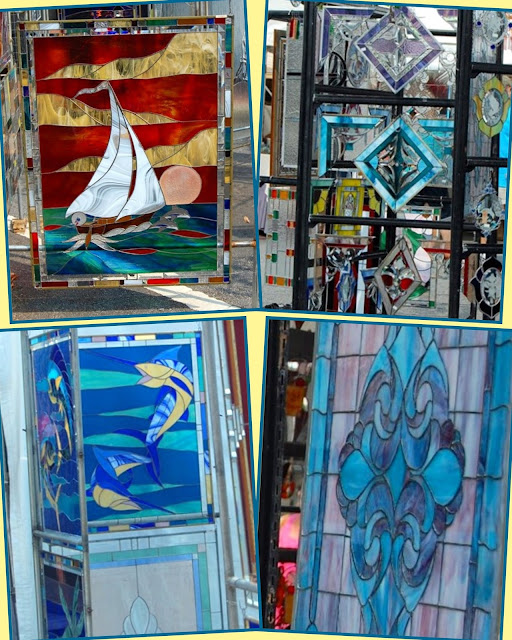 We were certainly short of eyes to look at all this wondrous and varied art festival. 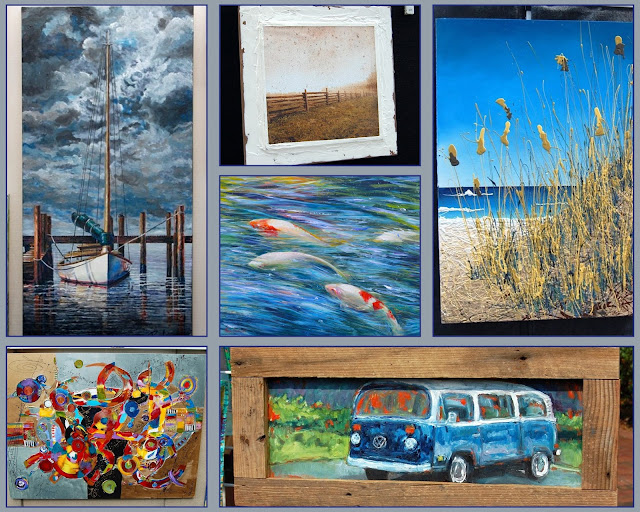 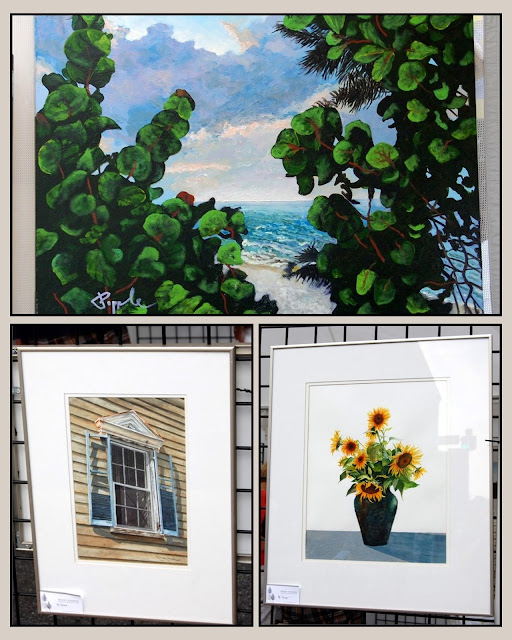 Lovely pottery dishes, bowls and mugs were tempting - but we already have so many pieces at home. 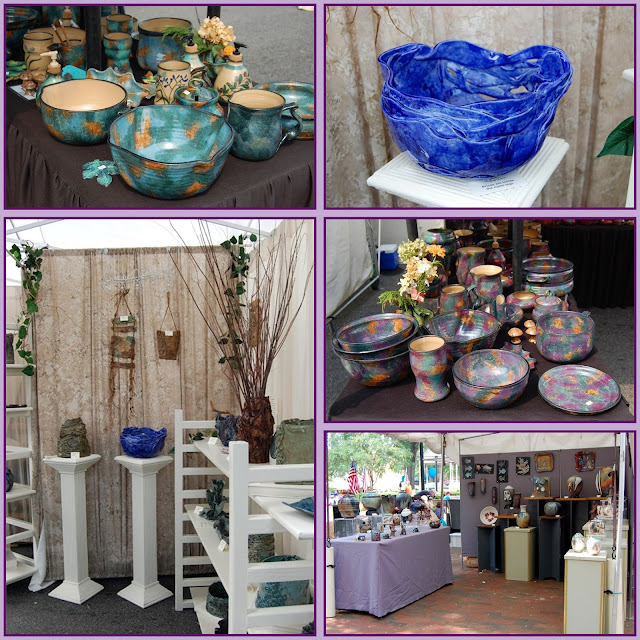 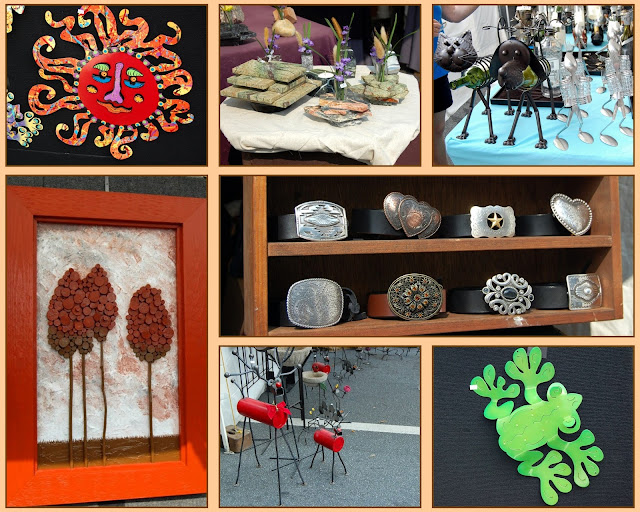 In the distance I could hear a strange low and vibrating sound - such as the wind instruments from Australia.  I approached and listened to a gentleman demonstrating his didgeridoo.  Afterwards he explained that he was using a special breathing technique to blow into his instrument and obtain the continuous sound.  Deborah Martin and Preston Scott from Carrollton, Georgia, is a team cutting, harvesting the raw material and handcrafting flutes, didgeridoos and keyboards.  They use traditional methods working with native bamboo and agave cactus.  Each handmade didgeridoo is individually decorated and hand-tuned. 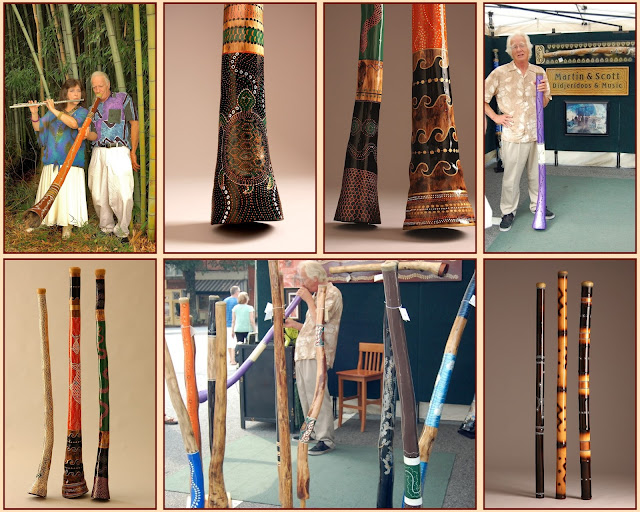 Last year I took a picture of some bicycle prints.  One of my blogging friends, Jeanie, asked if I knew the artist who made the prints, but I did not.  As I was walking I saw a booth with painting of various sports.  I stopped and talked with Michael L. Lee of Alpharetta, Georgia.  He is a former illustrator and graphic designer who works in fine arts.  I noted his name and took pictures of some of his paintings which can be purchased as individual art design or prints.  Click here for a link to his web page (michaelleedesign.net.) 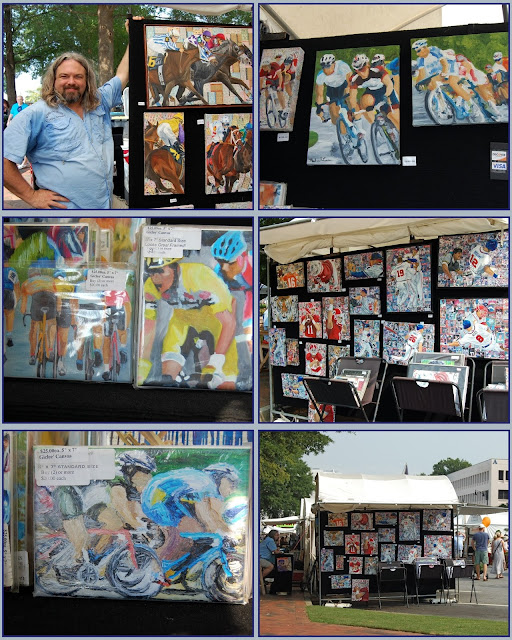 Then as I walked a bit further I saw another booth with bicycle prints, some of the same I saw last year.  I stopped and chatted with the artist - Sally Evans.  She was born in Chiswick, England, studied at the Amersham College of Art and also lived in Italy.  Now in Alpharetta, Georgia, for the last several years she was elected President of the Georgia Watercolor Society in 2009.  She sells her original art work and also prints of the same size.  In addition she offers Christmas cards and other prints on her website.  Click here for a link to it (artpainted.com.) 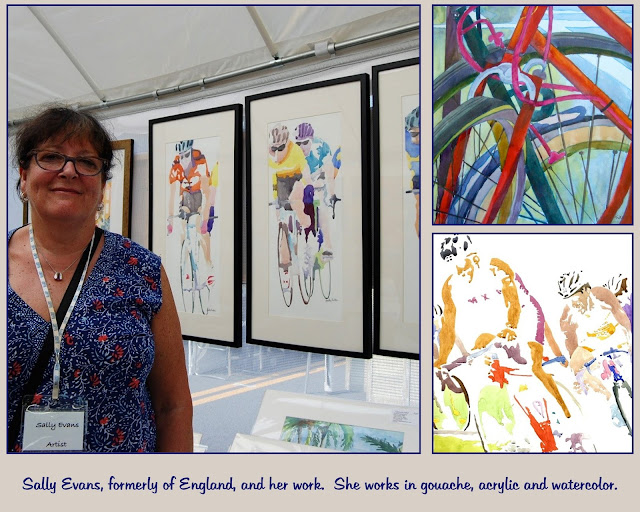 After seeing most of the art shown in the festival we walked to the Chalkfest which is held in conjunction with the art festival.  I'll show the photos I took at the Chalkfest in a future post as I believe eyes need to rest after so many colorful pictures. 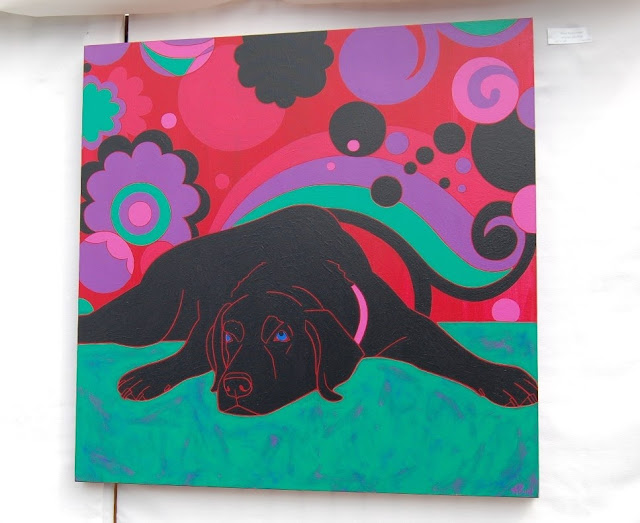 Yes, you took a lot of photos! Some of the paintings are really nice. We had "Fiesta Hermosa" here over the last 3 days. I went to the same fiesta for Memorial day and every year, they have the same things. We've had a lot of humidity for the past few days and we are not used to it. I stayed home and read!

Oh. I would love to see all this beauty in the one place.
As I scrolled through I kept finding more and more that filled my eyes and my heart.
Thank you so much for taking us there with you.

What a great post, and what fun you must have had at these art shows! Wish I lived closer to atlanta to experience these!

It was overwhelming, just to look at all the pictures, VB! I would have been very tired, after all that. As it was, I got to browse and enjoy at my own pace, thanks to your very detailed pictures. We had a chalk festival here in Bellingham until two years ago, and then they stopped it because of funding problems. I miss it, so I will enjoy seeing your pictures. :-)

Gosh! I haven't been to an Art Fair in ages. I don't think we have many of them in Hawaii. We loved going to them in Illinois. You had so many beautiful, tempting pieces at your fair. It must have been really hard to resist buying a car load.

After reading several Labour Day posts from the US I have to say that Americans really know how to throw a Labour Day festival. There was such a lot to see in this post. I'd love to have a couple of hours to wander among the booths.

It is just amazing to me how many talented and prolific "ARTISTS" and "ARTISANS" that there are all over the country and that this Festival attracts so very many people---It must be an incredibly successful weekend, sales-wise for a lot of these people....! The work it takes to bring all these things to one location and the difficult time consuming set-up....If it isn't successful for them, I really feel for them.
Your pictures are Great! And I feel like I got to be there with you and your dear hubby...It is an enormous undertaking to try to see it all, too! You did great! Thanks so much, dear Vagabonde.
Well done, my dear....!!!

What a fun event. There are a lot of very talented artists living in Georgia. The Campbell Folk School here in the mountains has an annual event in the fall very similar to the Marietta Art in the Park. I am always fascinated by the glassblowers.
Sam

Vagabonde, That was a very large and eclectic art fair! Sarah Evans watercolors reminded me of Leroy Neiman's works. My favorite at these shows are the woodworking booths and my better half favors the jewelry... Thanks and Take Care, Big Daddy Dave

You had a great time at festival. I love the stained glass things, lovely!
What did you buy there for your home?

Thanks so much, Vagabonde, for your email with the info on the artists and then the links here. It looks like a spectacular festival -- I haven't been to one so nice in a long while. I loved the Santa carvings, too... I'm so glad you had such a great time. I feel like I've been along with you!

Oh, my goodness! What an amazing event! So much to look at.

What an amazing fair- art all in one place - sounds wonderful to me. Lovely pictures and thanks for sharing.
Patricia x

Oh, how fantastic. How did you keep from spending all your money?!

What beautiful photos of some beautiful work. Much tempted! But those cats on the sofa warmed my feline heart. Friends in Marietta have spoken highly of this crafts fair, but it's the first I've seen of what's presented.

We returned from our trip the 28th. Trying to get caught up in Blogville. The washing machine got our laundry caught up before gasping its last. Thank heavens for Labor Day sales!

Amazing day filled with so much amazing art! Lucky I didn't go, I would be broke! LOL! Loved all the pictures! So many talented people!

It just got better and better. Like an Aladdin's cave of desirable objects. I would have been sorely tempted had I been there.
Thank you Vagaonde.

What a great and fun festival! Just amazing and so much to look at.
Love seeing so much people, children and dogs around the event.
I enjoyed so much things: beautiful rocking chairs, jewelry art, glass pendants, stained glass, art paintings and son on.
Thanks for this wonderful post and great pictures!
I would love to be there with you.

Everything is so beautiful it is like sensual overload...but the animal art is my favorite...the dog and cat in particular...I wouldn't bet on me getting out of there without spending a bundle lol...loved this, thanks for sharing
Sandi

What a cool festival, very colorful and fun-looking.

Your post was so enjoyable thanks to the interesting way you arranged the various art work photos. I like the way you framed the narrative with two very different dog images!

Dear Vagabonde, that you for this visual art festival. It was a feast for my eyes. I love glass and the blue bowl in one picture is something I wish I could have seen and maybe purchased. So much talent in our world. So much creativity. I so wish we'd devote more time and talent and creativity to our pursuit of peace. Peace to you ever and always.

Wow! Some fantastic art on display. People are so talented. I loved those carvings.

oh what a lot of treasures I love all the colourful art and love to go to art markets. Nice toothpick holder you bought You can always be sure to buy something original when you buy art.
I usually come home with a scarf. I buy my necklaces always on Novica online, made by artisans from all over the world. So beautiful. Amazing how people can create so much beauty