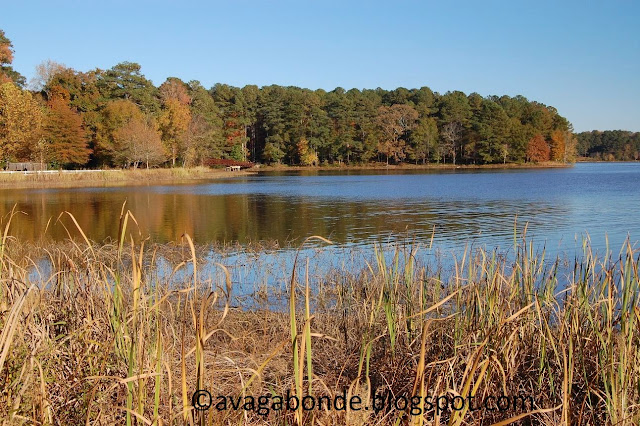 In my last post I was recollecting walking on the Allatoona Pass Trail, which runs along Lake Allatoona, on Thursday 7 November.  The following day, Friday November 8, 2013, was another bright and sunny day.  This time we went even closer to home.  We drove 8 miles or 12 kilometers to Acworth, Georgia - it only took 15 minutes.  There is a lake there and a small trail running along part of the lake. 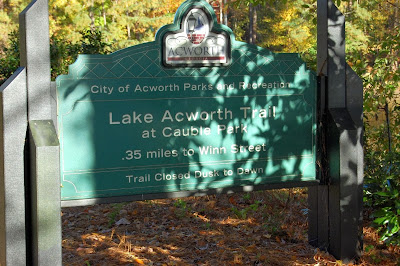 Until the early 1830s Acworth was a hamlet in the Cherokee Indian Nation.  It became a town after the Indian were expelled.  It was a railroad stop and was named Acworth after the home town, in New Hampshire, of a Western and Atlantic Railroad engineer and was incorporated as a town in 1860.  During the Civil War the town was captured by the Union forces and burnt down by General W. T. Sherman's army.  When Lake Allatoona was formed, the Acworth citizens were afraid that their town would become a swamp. They petitioned the Government for a second dam.  This dam was built resulting in Lake Acworth.  Lake Acworth is not a part of Lake Allatoona but empties into it.  At Lake Acworth there is a beach, a community beach house for up to 100 people, a gazebo, a fishing dock and boat ramps, picnic table, playground for children and a bathhouse, dedicated in 1953 and listed in the National Register of Historic Places.  You can see the brick bathhouse behind the red tree in my picture below.  It was sunny that day but not warm enough for swimming in the lake and, in any case, the beach closes on Labor Day.  (Click on collage twice to enlarge.) 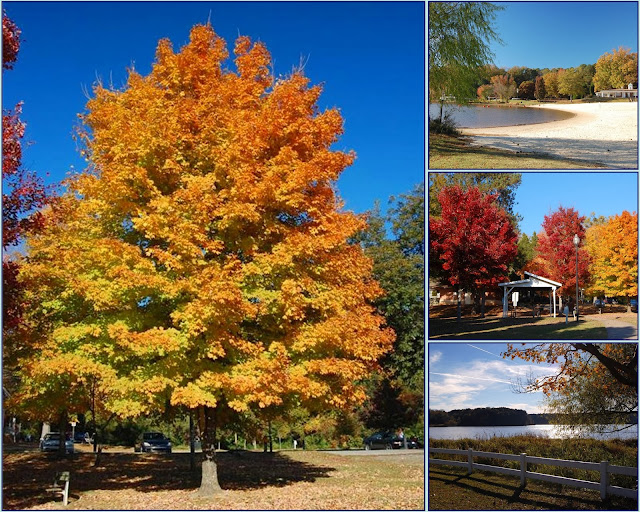 Acworth also has a historic downtown with old advertisement murals and antique shops. I took the pictures below when we went to eat in a pub in downtown Acworth last March. 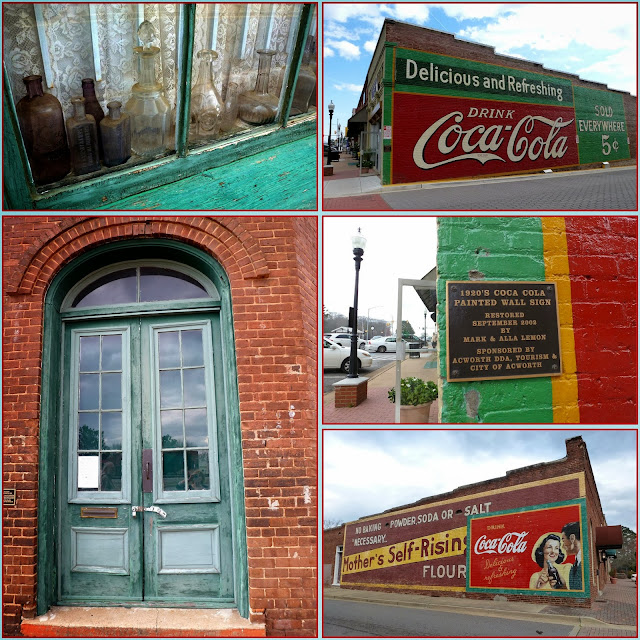 We started walking along the lake with me, of course, stopping often to take photos.  I looked back and saw my husband taking his binoculars out and looking in a direction close to me.  What did he observed in his binoculars?  I looked but could see nothing. 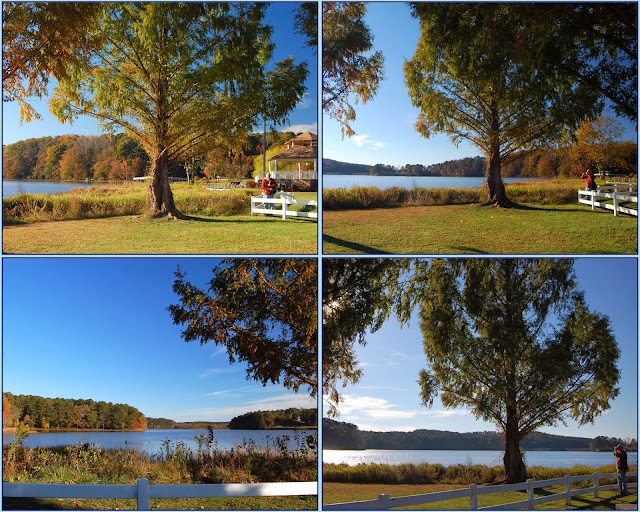 Maybe he was just admiring the lake - it was lovely in the sun and so peaceful. 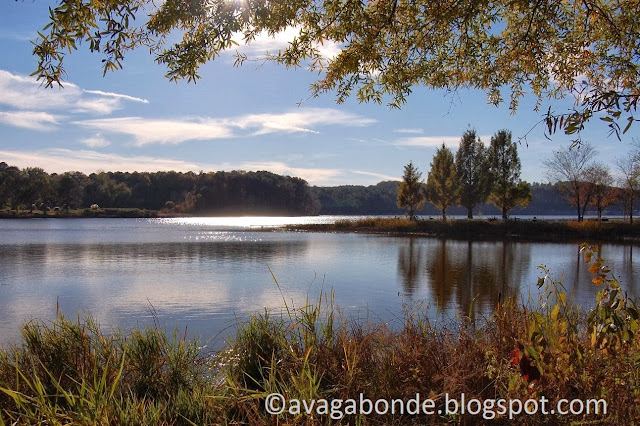 There was a boat dock close by.  I walked on it to take more pictures of the lake.  Not all the trees had changed color yet, another couple of weeks were needed. 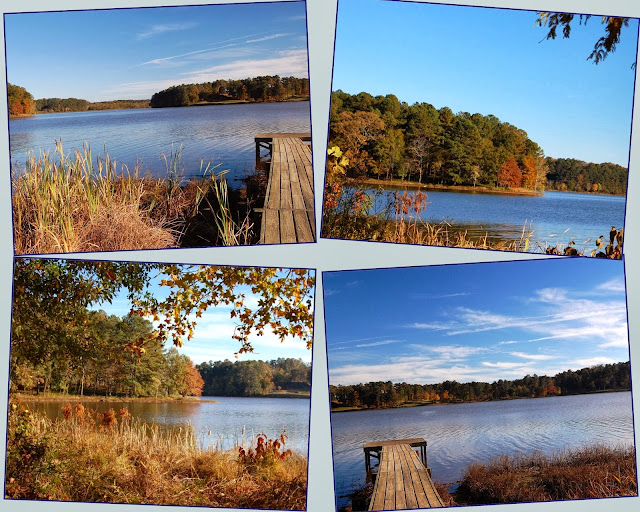 I slowly walked to the end of the boat dock - gingerly in case some wood was rotten - I was not ready to get wet!  But then, I saw what my husband was watching ... it had been hidden by the tall weeds. 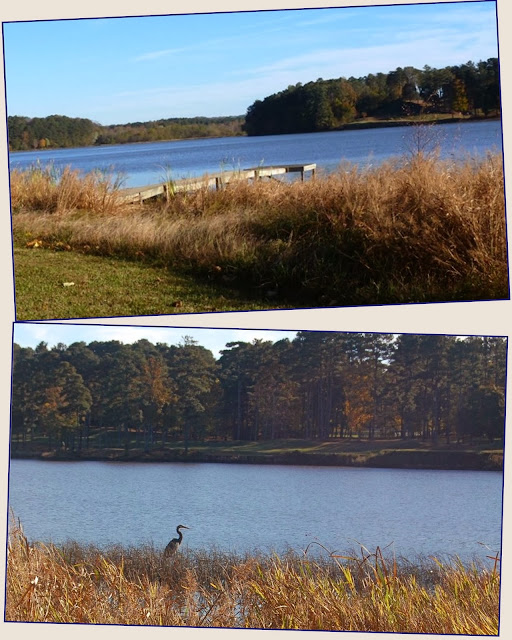 I used my Lumix camera which has a long telephoto lens while trying not to scare the bird off.  It was a heron, but I am not sure of what species. 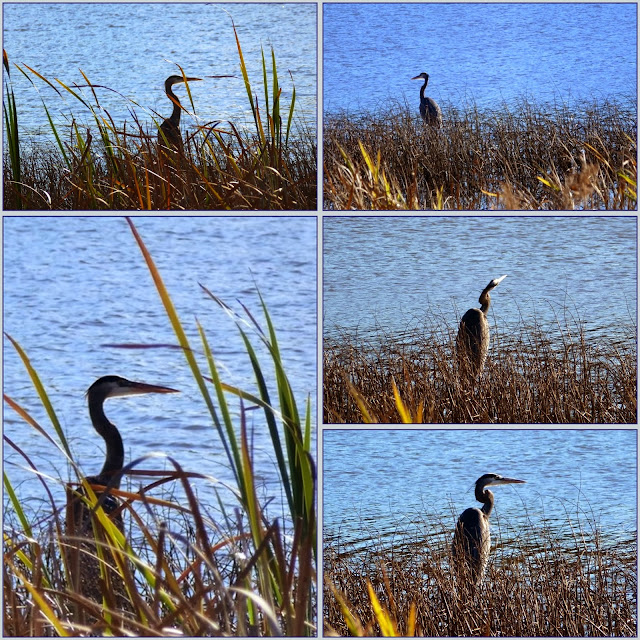 I could not get any closer or I would have fallen into the lake for sure.  We observed the bird for a while then we saw a bridge on the side and decided to walk to it. 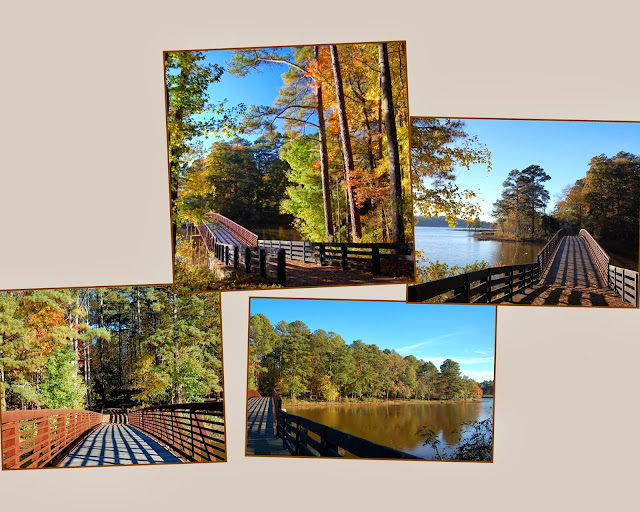 The trail went along the lake and up a little hill with a picnic table placed at the top.  It would be nice to have a picnic there - so scenic and peaceful.  Through the trees I could see ducks. 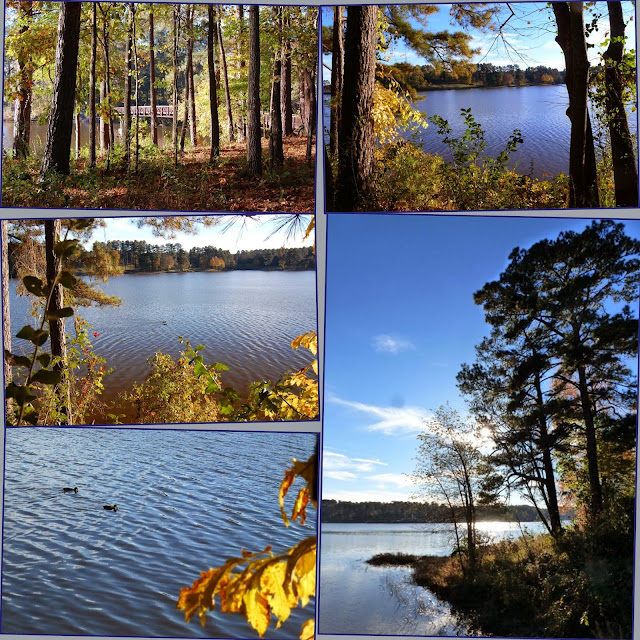 Crossing the bridge on our way back I spied a turtle sunning on a log. 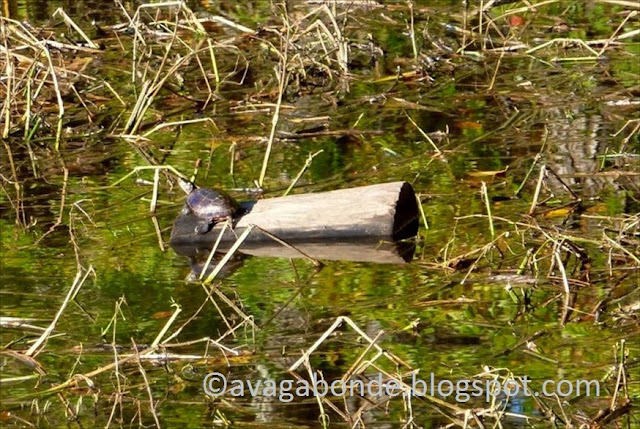 We had seen more wildlife than when we went to Lake Allatoona: a heron, wood ducks, a turtle and as shown below another duck was coming our way, a Mallard.  It was going to join the other two ducks in the little cove on the other side of the bridge. 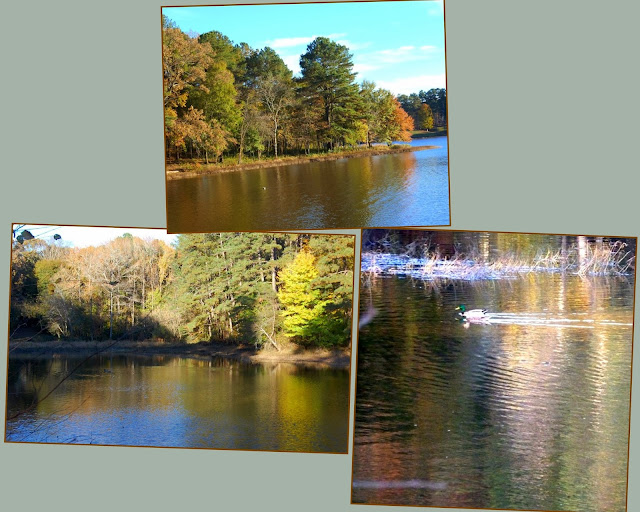 We left promising to return more often.  This very pretty lake is so close to home and now that we are retired we can go there during the week when there are few visitors.  We drove off.  My husband said "Stop - look!"  After braking I looked ... 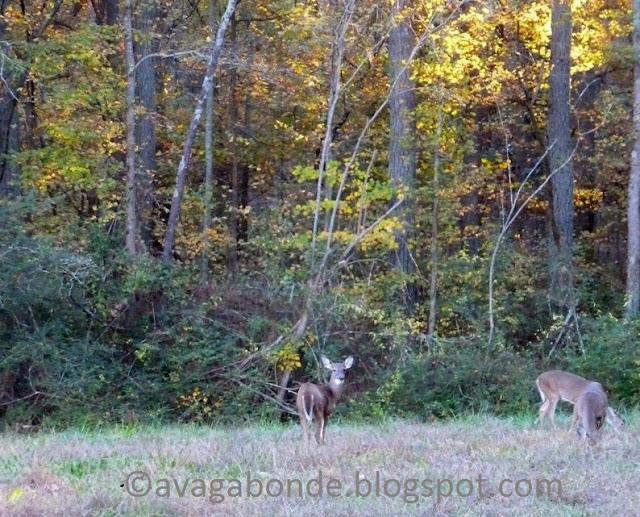 There were three does munching on grass.  One of them had seen the car and was watching us anxiously.  We did not move then I slowly turned down the window to take better pictures with the Lumix that I always keep in my purse.  The does went on eating for a while then looked at us and suddenly took off. 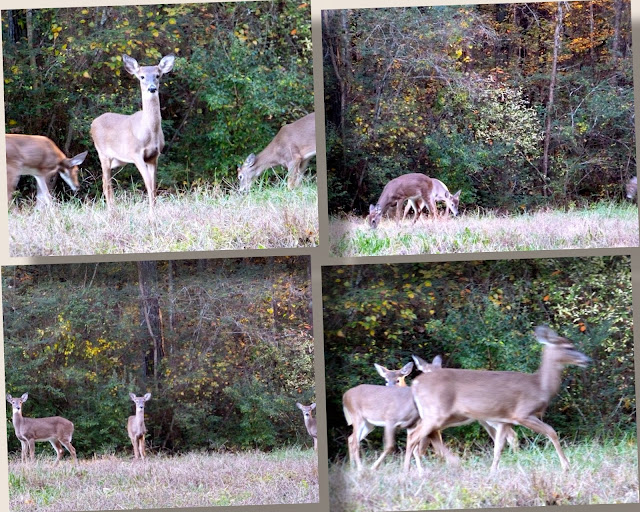 We were pleased to have seen these does - but no turkey!  I guess they hide when it gets close to Thanksgiving ... I did find a painting showing a flock of turkeys as you can see below.


Autumn Landscape with a Flock of Turkeys, by Jean-Francois Millet, French 1814-1875

But I'll end up with this vintage postcard, circa 1911, to wish you all a Happy Thanksgiving with all the trimmings. 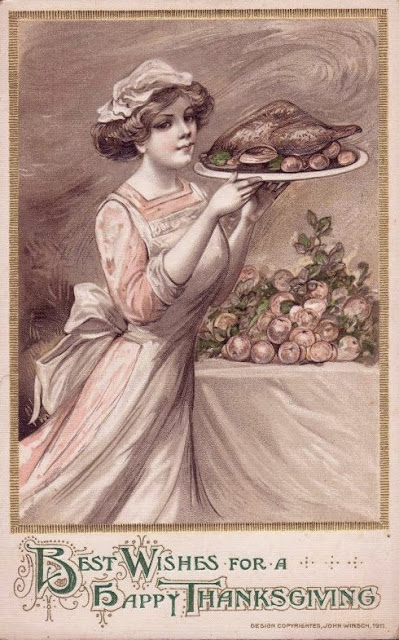 And for my blogging friends who do not eat meat ... here is another vintage postcard with hearty Thanksgiving greetings. 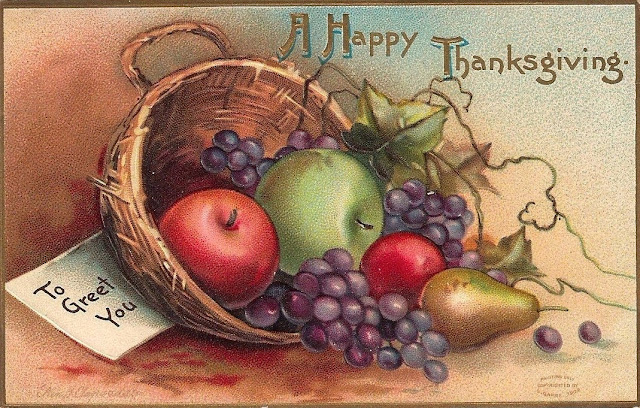 What a lovely post! You live in such a beautiful part of the world and I so enjoyed taking this journey with you on a fine but chilly morning in London. I loved the old vintage signs and of course, the lake. The photos taken of the dock are really gorgeous as are the ones of the heron and does.

What an incredible place - and the wildlife and the autumnal colour were spectacular.
Thank you so much for the turkey free card.

Another really beautiful place not far from your home. Very serene and peaceful. I wish you a very happy Thanksgiving, too, VB! :-)

Vagabonde, Just fabulous photos as usual! You really do take the best pictures... Must have a great camera too! Love that old painted Coca Cola sign. I only have positive thoughts about Coke. My aunt was married to the company's CEO and when my mother's health was declining, my aunt built her a house and covered most of her medical and care expenses. If she hadn't helped my mother, I would have had to step up and I'd probably still be working. Instead, we're living here in east Tennessee surrounded by beauty! Have a great Thanksgiving...and Take Care, Big Daddy Dave

Beautiful lake and trees in fall, Vagabond! Lovely ducks and deer, you had wonderful time strolling close to your home. Happy Thanksgiving!

Another lovely outing you have shared with us! I love the old advertisements and the views across the lake. Hope you have a lovely Thanksgiving.
Sarah x

You missed your calling by not becoming a photo=journalist. Yes, indeed, each picture is stunning with a strong sense of place and time. Hope your Thanksgiving is peaceful.
Thanks so much for your thoughtful comment on my blog.

I love all the pictures and the wildlife! I thought that was great about the restored Coca-Cola painted sign! I hope you have a very Happy Thanksgiving ;o) Take Care ;o)

Beautiful photos as always. It's amazing that you're in such close proximity to Nature. Have a Happy Thanksgiving, Vagabonde. I look forward to your report on your Thanksgiving dinner/. :)

A very HAPPY THANKSGIVING to you,too, my dear....
What a lovely lovely place----And seeing all the very wonderful wildlife--The Deer being so very Beautiful...
The beginning disturbed me because you said...'the Indians were expelled'....I could not read the rest without thinking of those Native Americans---God knows what happened to them and how they were "expelled"...Our History---the White Man, I mean, it's littered with the carnage of others--and particularly our early History, when we just destroyed the Indians; giving them smallpox for one; and God knows what else---not giving a damn about them and their lives and family....It makes me shudder to think of what blood was shed in that very beautiful place. I find it hard not to think about this, I'm sorry to say. Forgive me----but all those terrible things were conjured up by that one sentence. And wondering what happened to the Indians.

Oh, and I wanted to say----your pictures are stunning. That Bridge is so very beautiful---I loved the different views of it---Loved ALL the photo's my dear....
How Peaceful and Beautiful that place is....

Beautiful capture of the heron!

I hope you're having a fabulous Thanksgiving break! Thank you for all these lovely photos to enjoy.

My first thought was that your husband was watching a bird.
Such a beautiful spot and stunning photos.

I don't know how I missed this lovely, peaceful post, but better late than never. :-) Such a tranquil place and as always your photos are superb and your information so interesting. Thanks for this.