Historical fireworks in Paris in July 2014 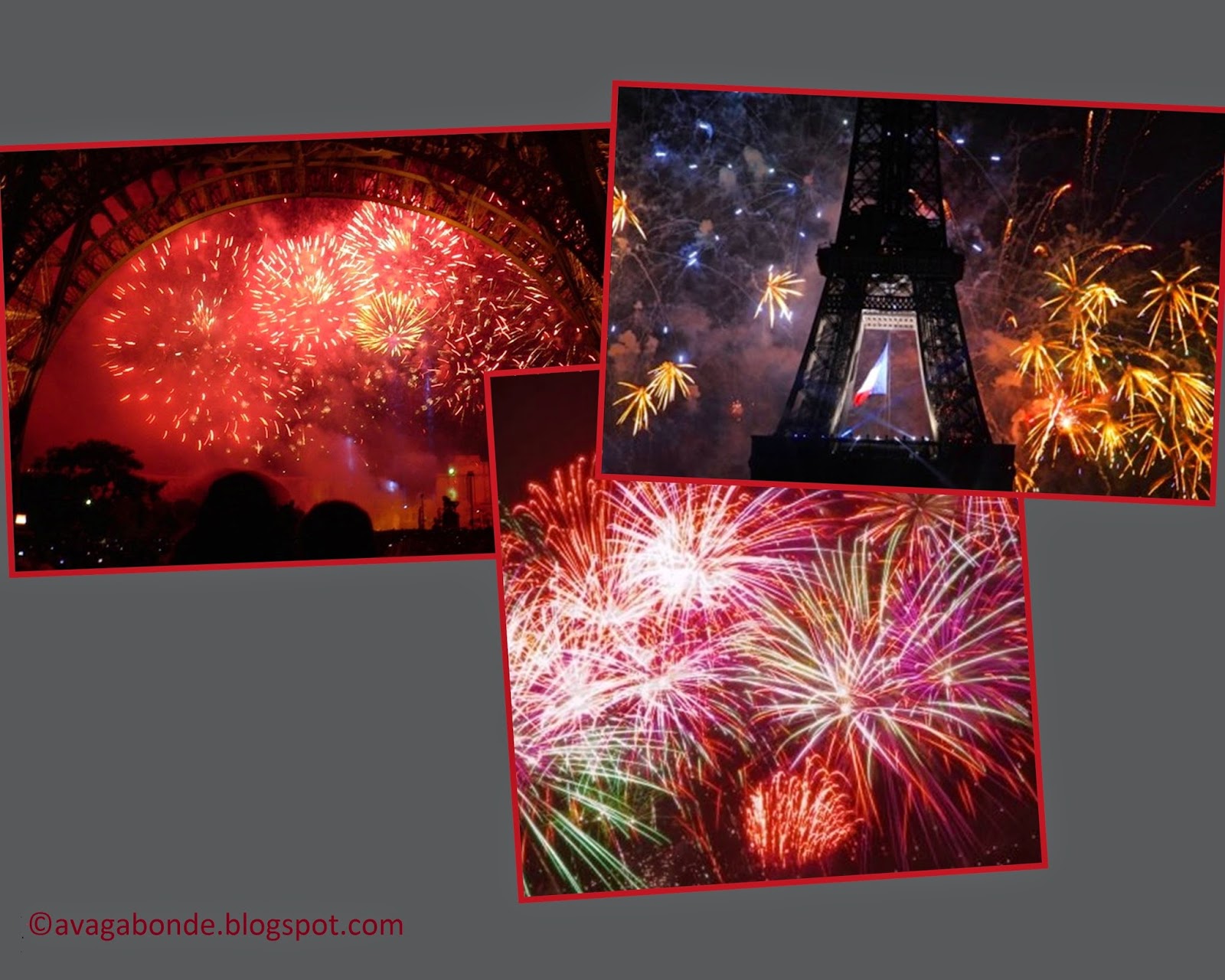 In my last post I showed the historical parade down the Champs-Elysees in Paris on the 14 July.  This had been a special parade because it included soldiers and flags from 80 invited countries - countries who took part in World War 1 (started 100 years ago today - 28 July 2014.) 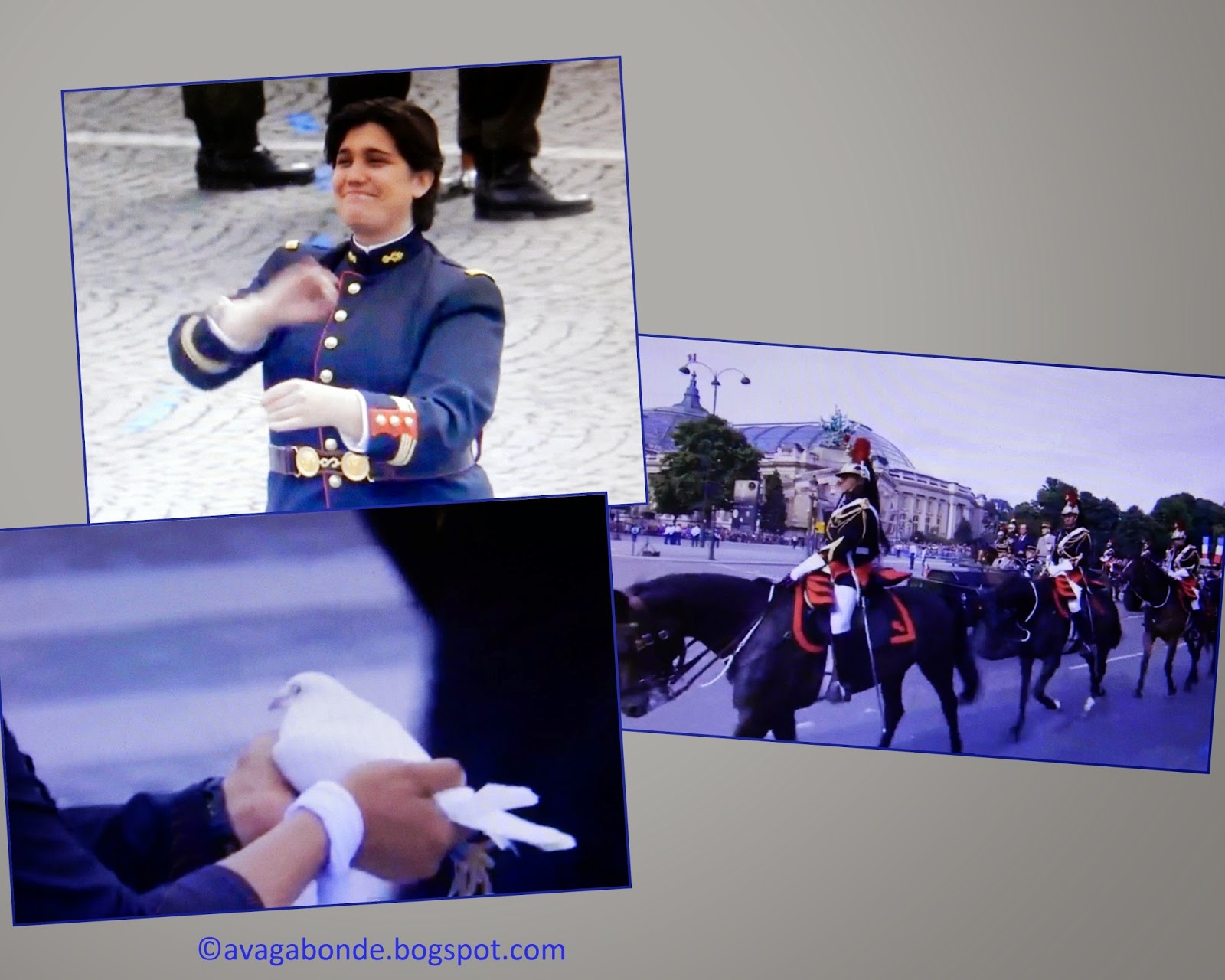 In the afternoon there was a special program called "Les Parisiens accueillent leurs soldats" (Parisians welcome their soldiers.)  These were friendly gatherings of  soldiers and citizens in several areas of Paris, such as near the Opera, close to Le Louvre, and seven other locations.  The soldiers explained their missions, their lives, etc. to the Parisians.  Then in the evening, at the Champs-de-Mars (adjacent to the Eiffel Tower) a classical concert was offered for all to enjoy.  The concert included 250 musicians, choir singers and opera singers.  It was filmed by 24 cameras and a camera in a helicopter.  The theme of the concert this year was "War and Peace."  I think that's why it was a classical program, as I don't believe rap music or loud rock would have been appropriate.  The concert started at 9:30 pm when it was still light.  I was able to watch it live on my computer - it was magnificent. 200,000 spectators were expected to come to watch this concert and 500,000 came!  You can see the crowd below by the feet of the Eiffel Tower.  The theme for the 2013 Concert was "Love in Paris" (L'Amour a Paris.) 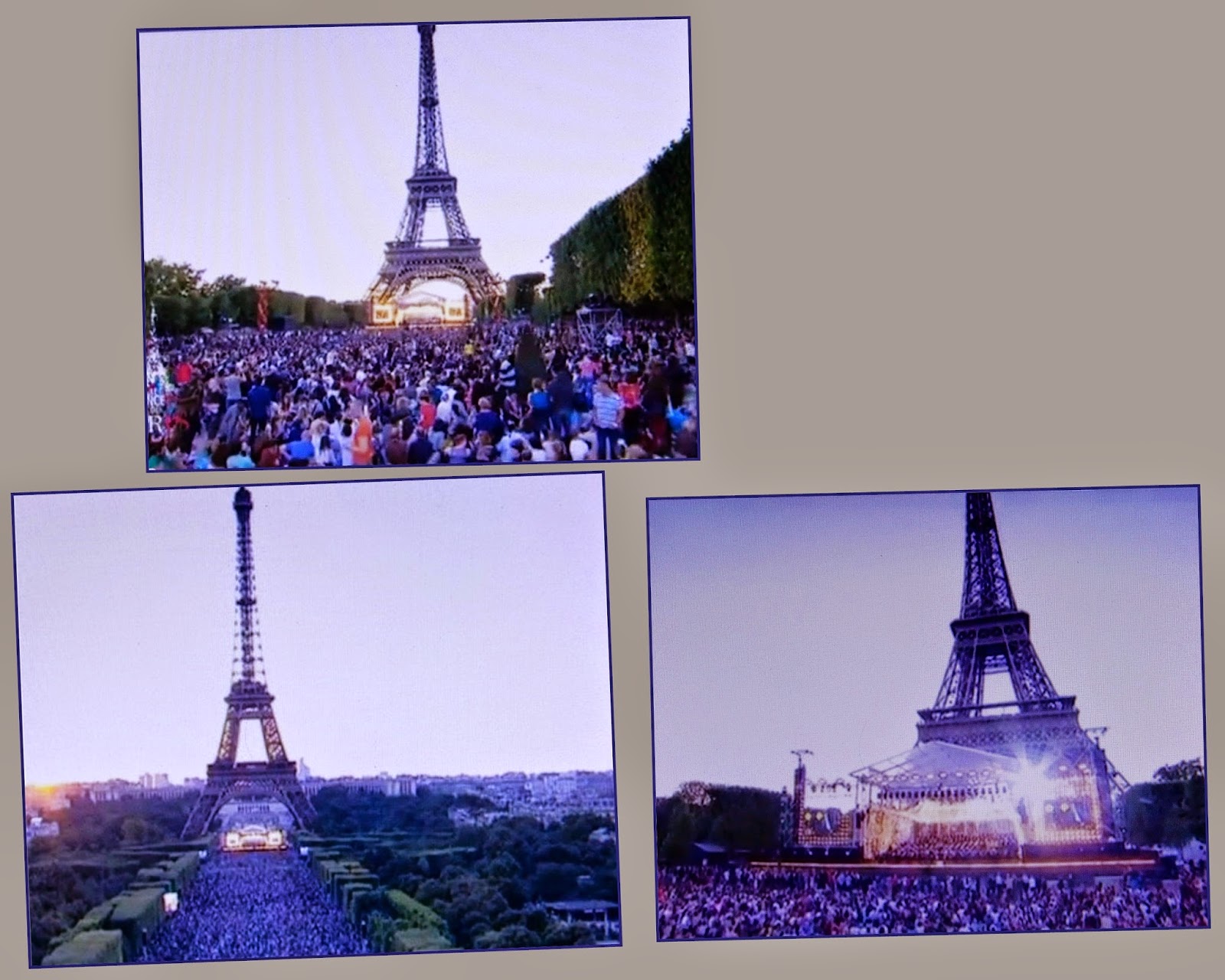 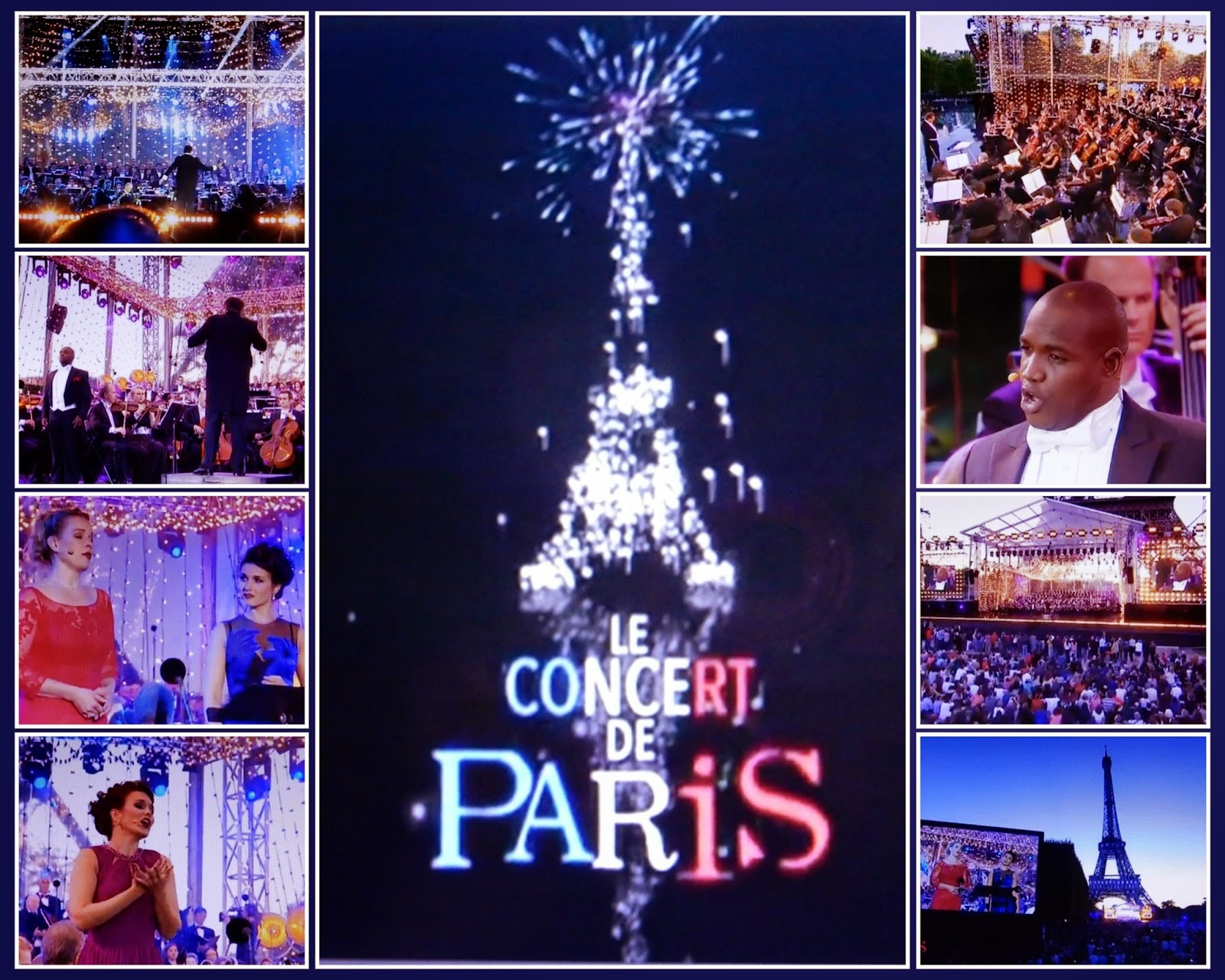 While the music was playing the camera turned several times to a panorama of Paris.  The sun was setting - in July in Paris that is close to 10:00 pm.  Later, as the sky darkened it was possible to see fireworks from other parts of Paris. 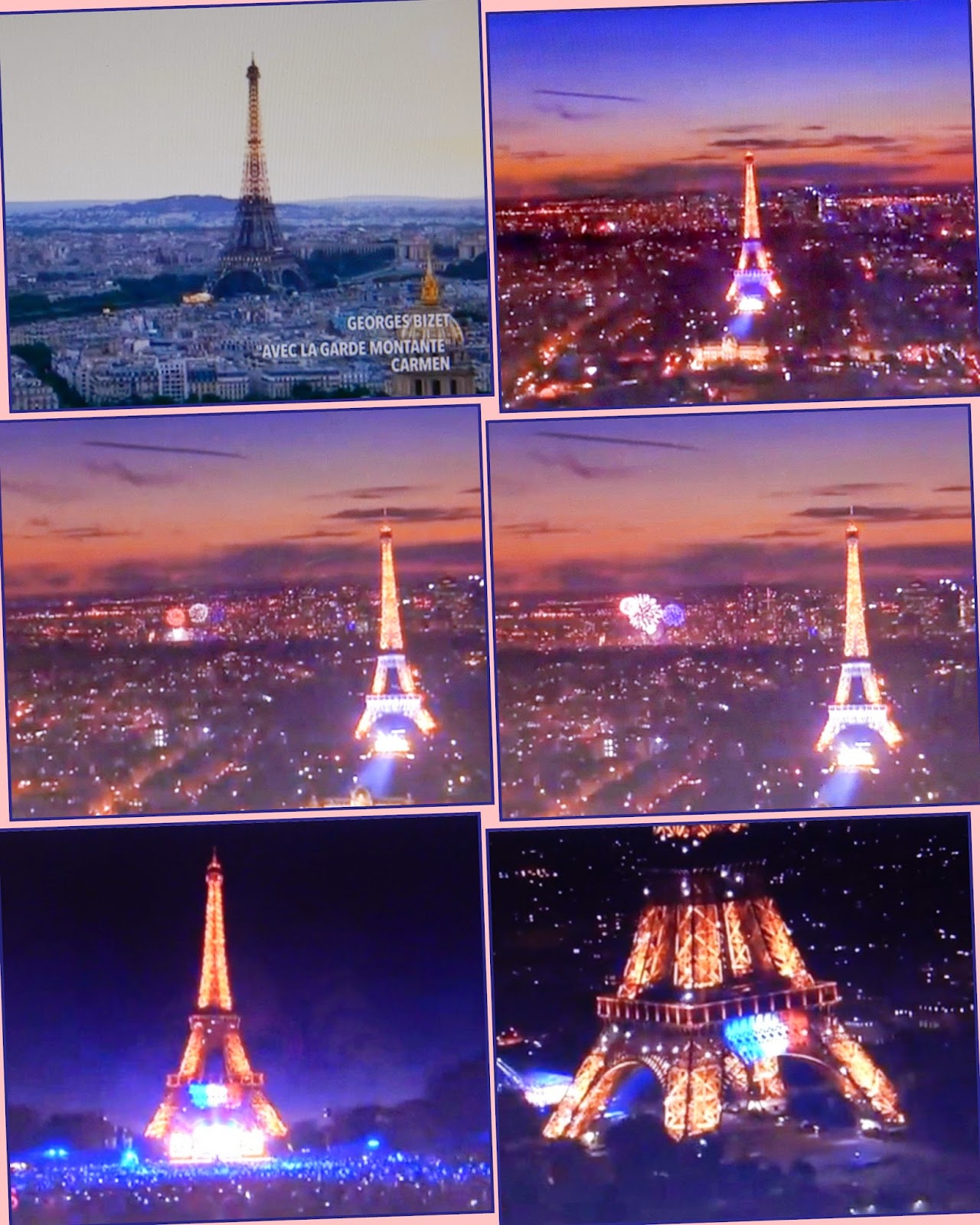 The stage was set at the feet of the Eiffel Tower and the tower could be seen behind and above the stage. 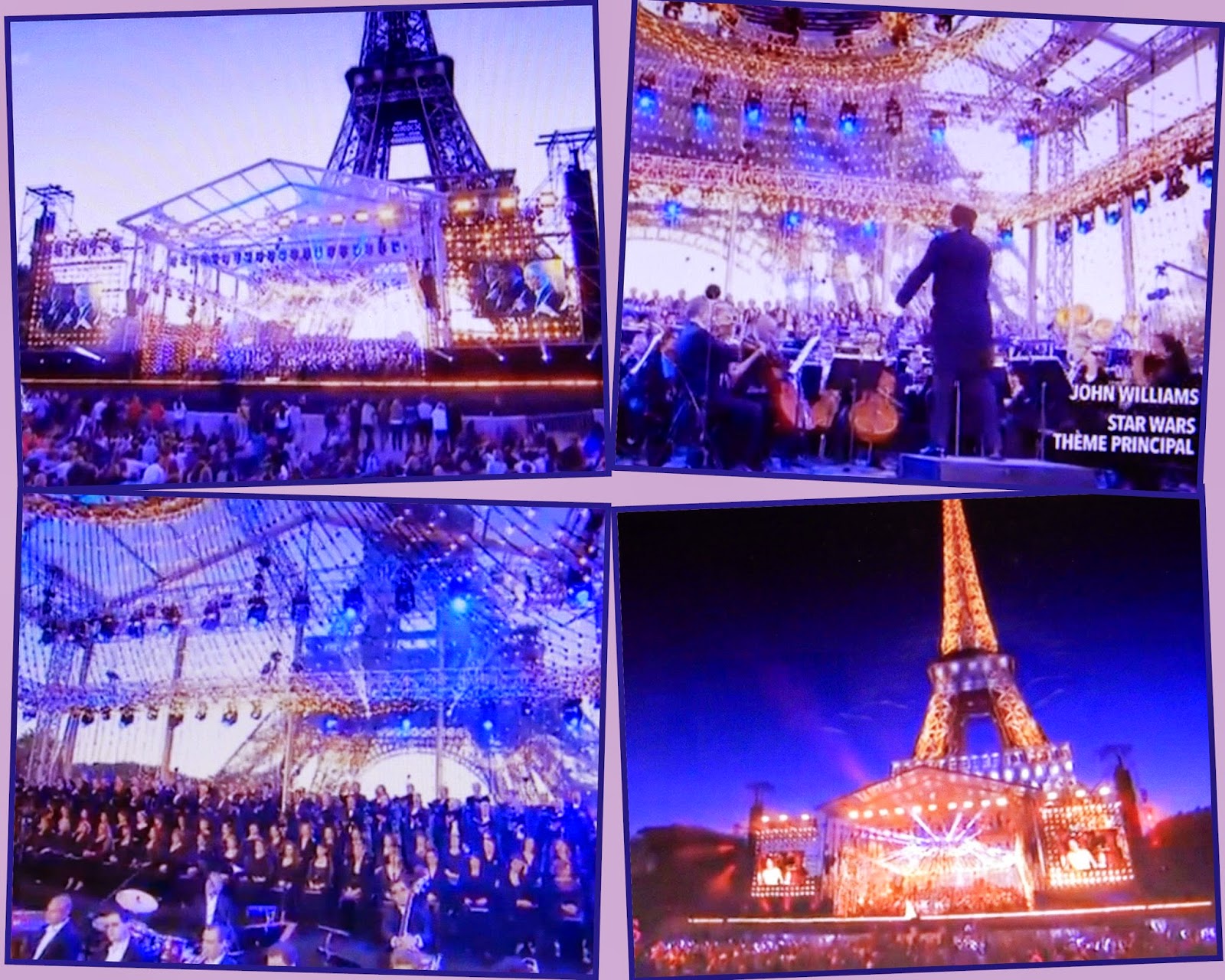 The concert ended with the French national anthem, La Marseillaise.  All the opera performers as well as the 120 choir members and the standing public sang in unison. 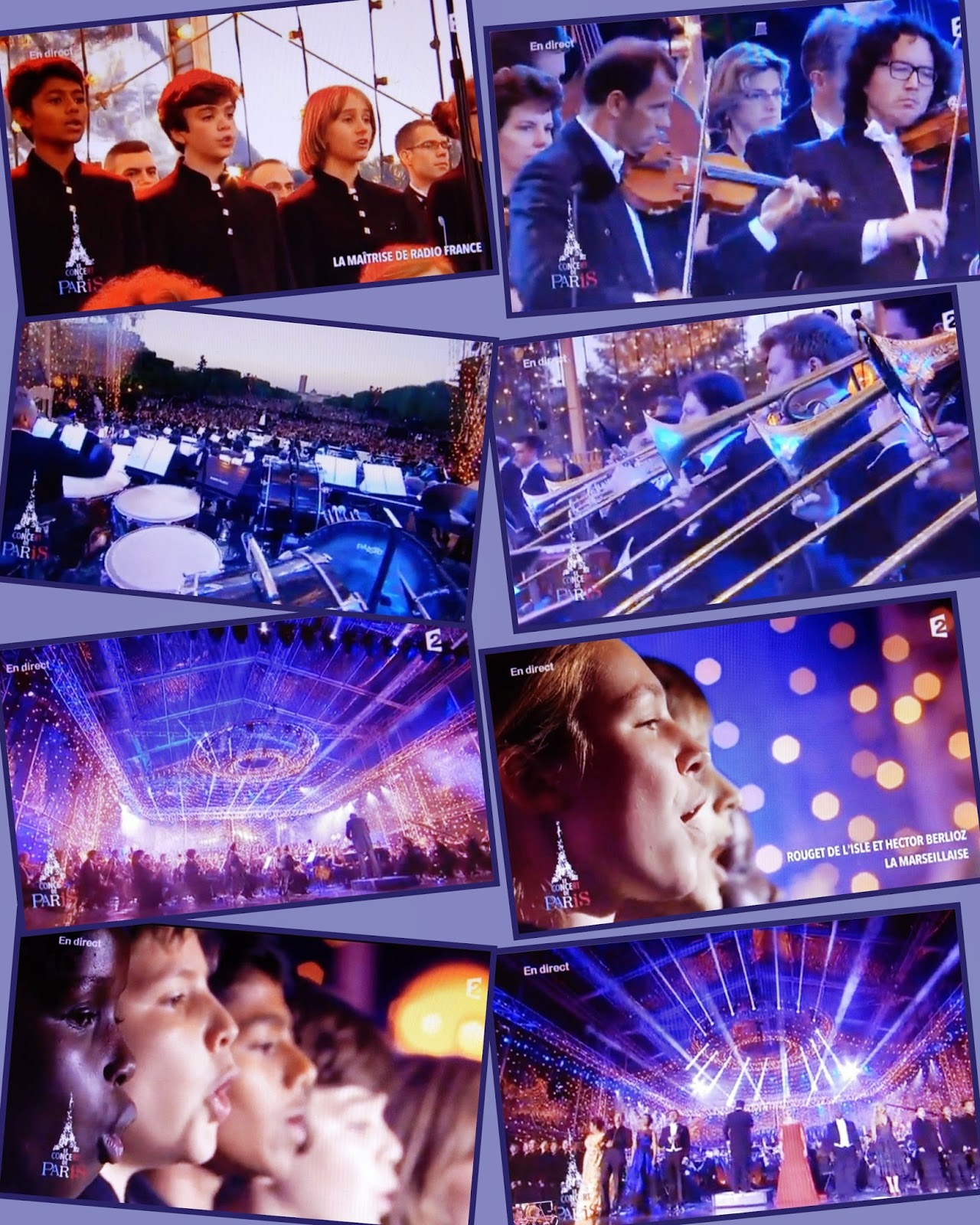 It was approaching 11:00 pm when the fireworks display started.  For the first time since the year 2000 the fireworks were actually launched from the Eiffel Tower itself rather than from the Champs-de-Mars.  330 projectors and 550 spotlights were used.  It took 6 months for 50 pyrotechnic specialists to work on this display.  The 35 minutes firework program cost the City of Paris close to 600,000 Euros or US $805,650.  The whole length of the tower was used to launch the fireworks so that it could be seen from all over Paris.  Pyrotechnic letters were shown on the tower to introduce the spectacle using words and dates so the public could follow the chronology of the show. 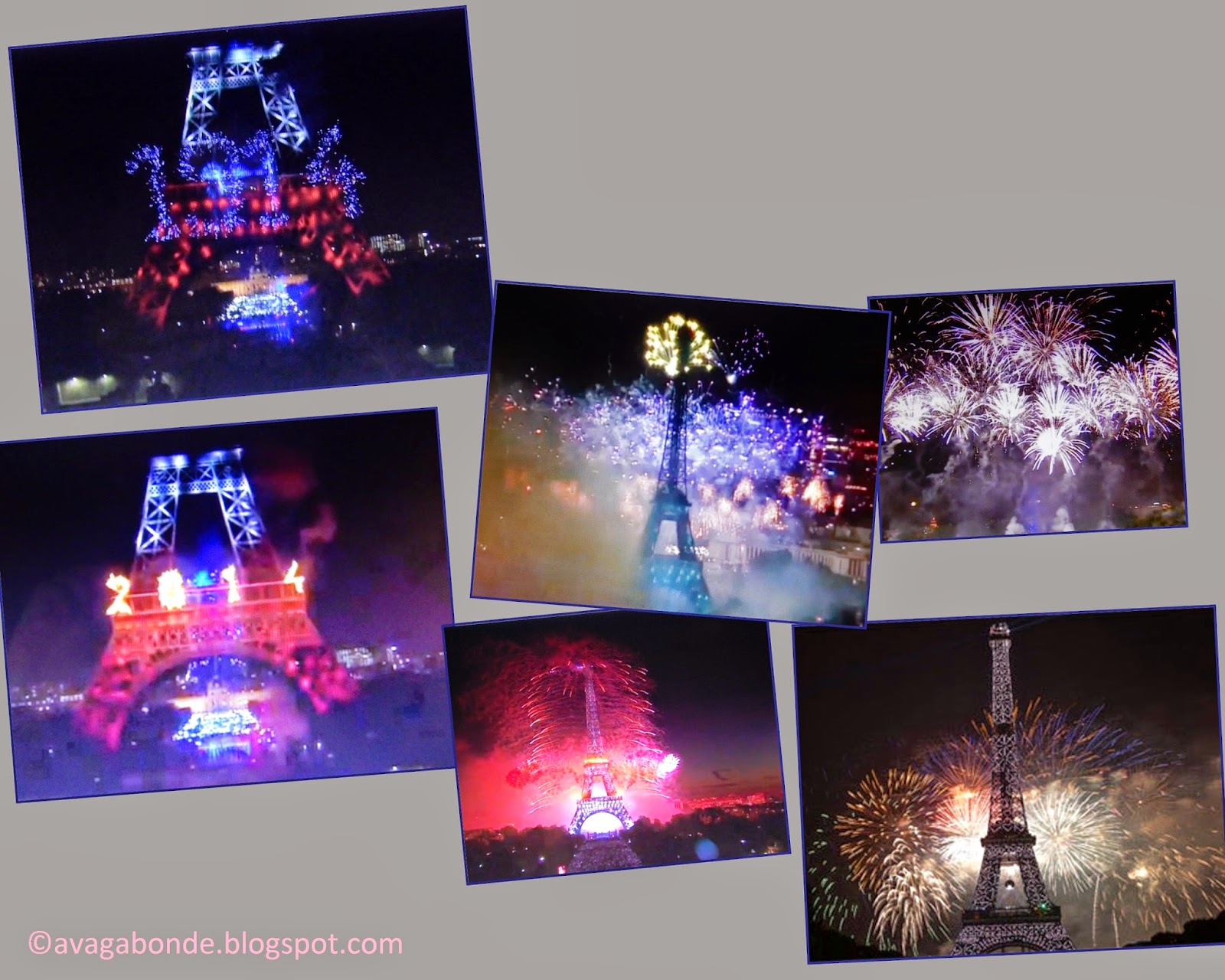 One hundred light beams had been installed on the Champs-de-Mars to illuminate the Eiffel Tower.  In addition one hundred flame generators had been placed on the first two floors of the tower to keep it ablaze with light.  It certainly was a breathtaking spectacle. 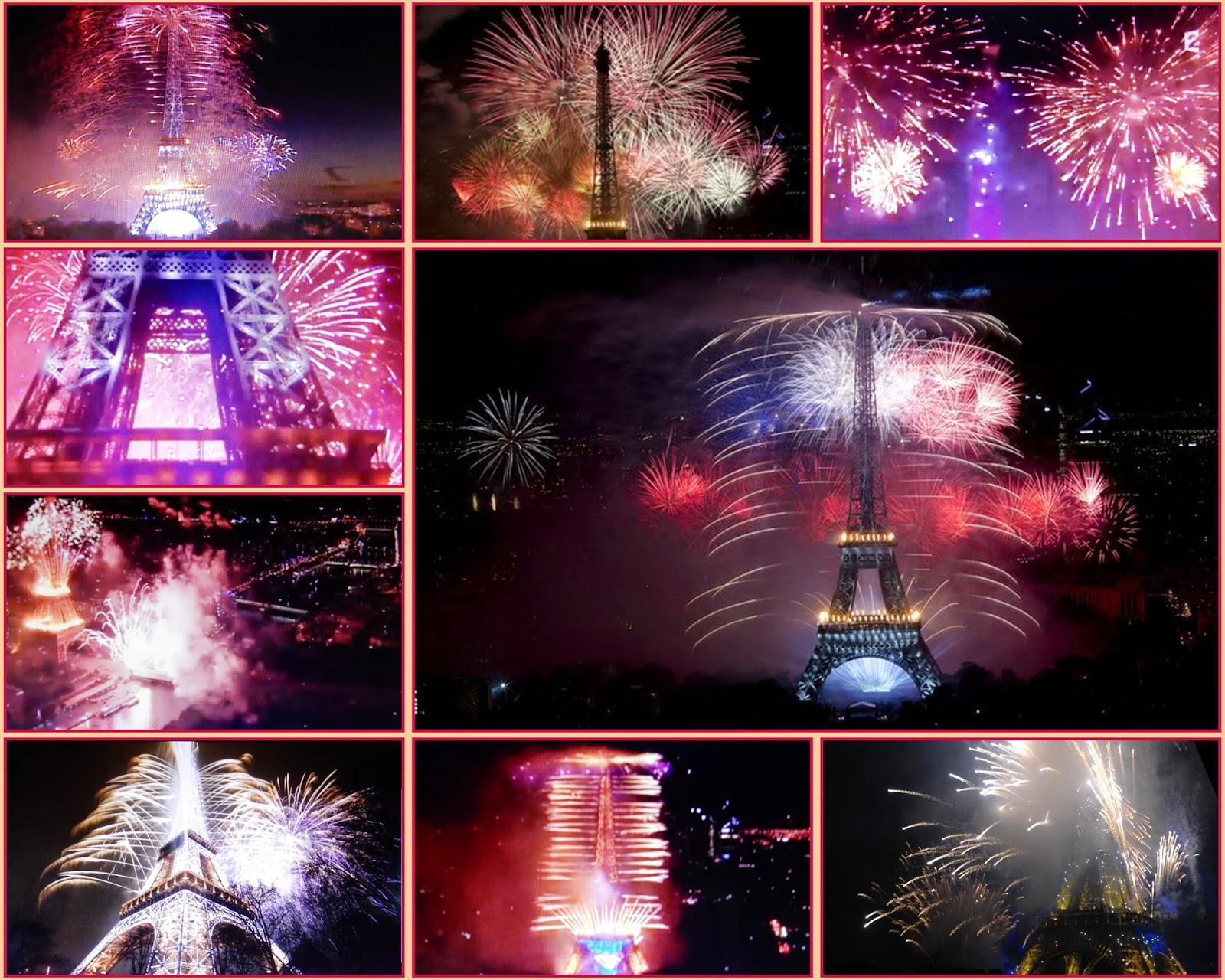 The show was accompanied by an original soundtrack of standard classical music including the Requiem of Verdi, the Requiem of Mozart, the "Ode to Joy" of Beethoven and even "Imagine" the music of John Lennon.  The music, Bengal fires, fire rockets, stars and everything exploding had been shaped into 5 meaningful sequences: Introduction 2014-1914.  First evocation: The Great War - tribute to the victims of the conflict.  Second evocation:  The Second World War - tribute to the victims of the conflict.  Third evocation:  the light returns.  Fourth evocation:  Reconciliation and Reconstruction - tribute to Veterans for Peace and Brotherhood, and some wishes.  The first wish was: France, open and peaceful nation. 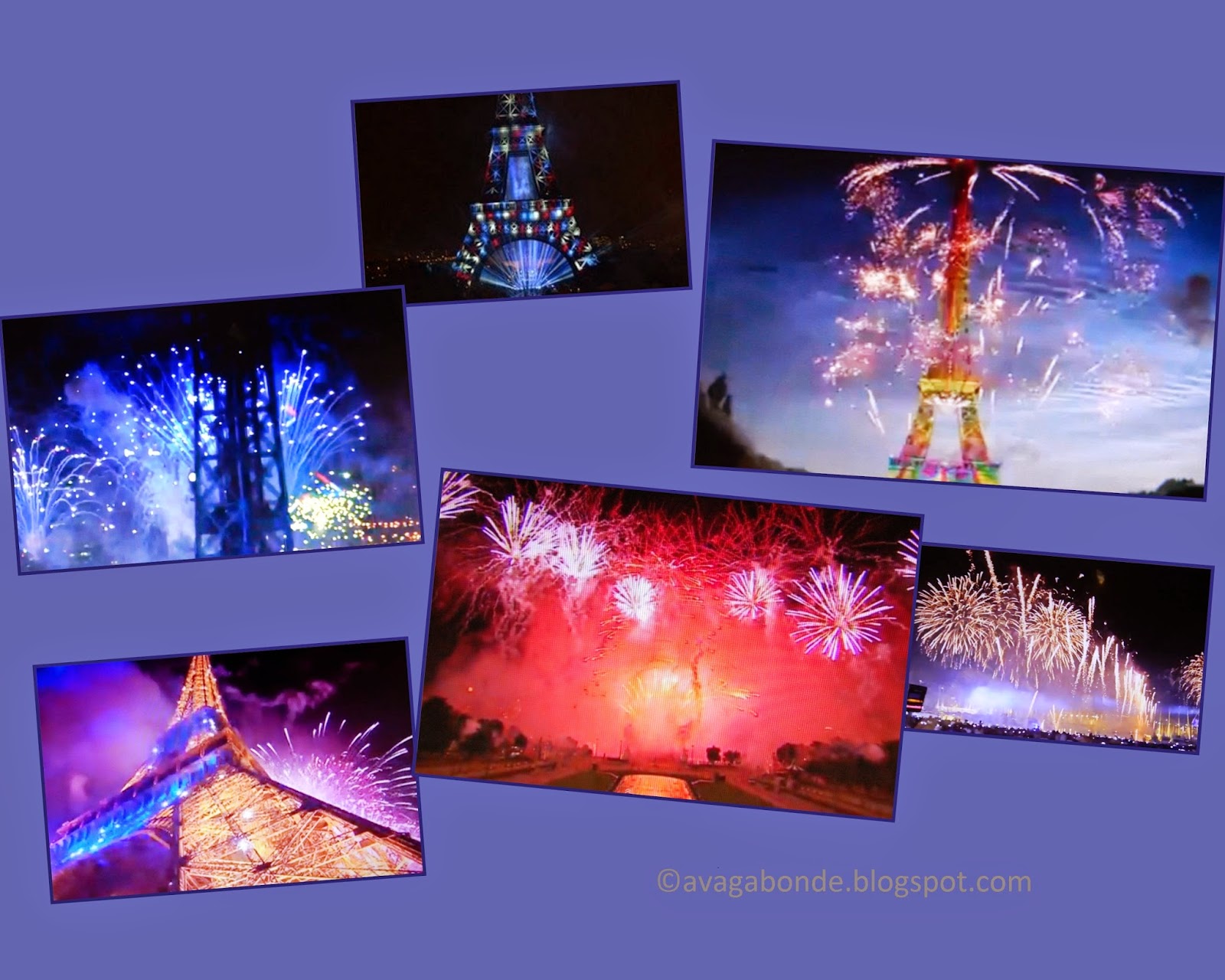 The second wish was: that joy remains, long live peace! (In French peace is "paix.") 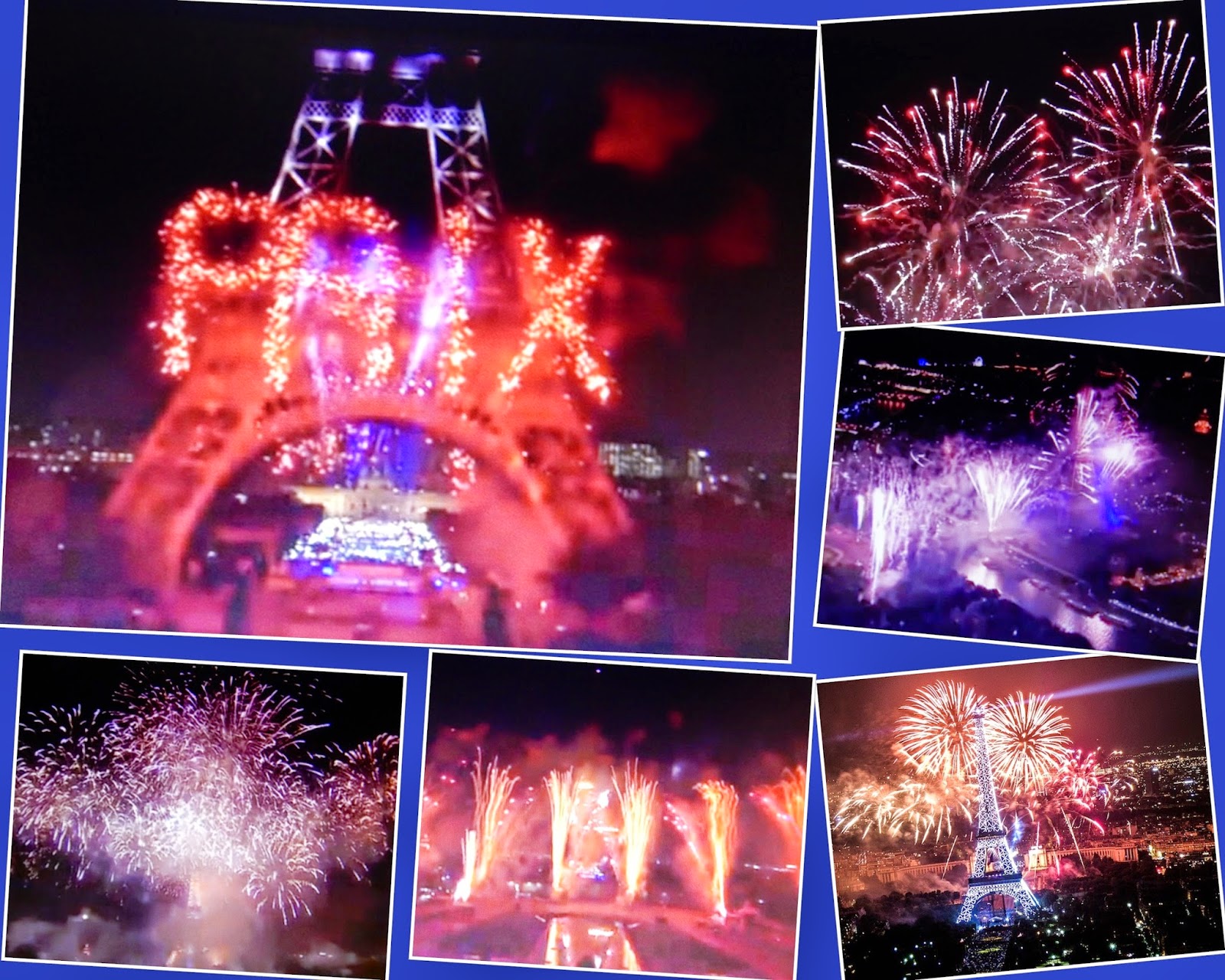 Certainly we all wish for peace and would celebrate it if it ever came to pass ... Here is a list from a quick search on the Web for current armed conflicts:  Syrian Civil War, threat of genocide in the Central African Republic, Northern Mali conflict, post Civil War violence in Libya, internal conflict in Mozambique, Civil war in Iraq, Islamist insurgency in Nigeria, South Sudanese Civil War, South Yemen insurgency, Pro-Russian rebels in Ukraine, ongoing war in Afghanistan and the current Israel and Gaza armed conflict.  In France the First World War was also called "La Der des Ders" der is an abbreviation for derniere meaning last or the Last of the Last and in English is was called "The war to end all wars" ... an optimism that was not fulfilled. 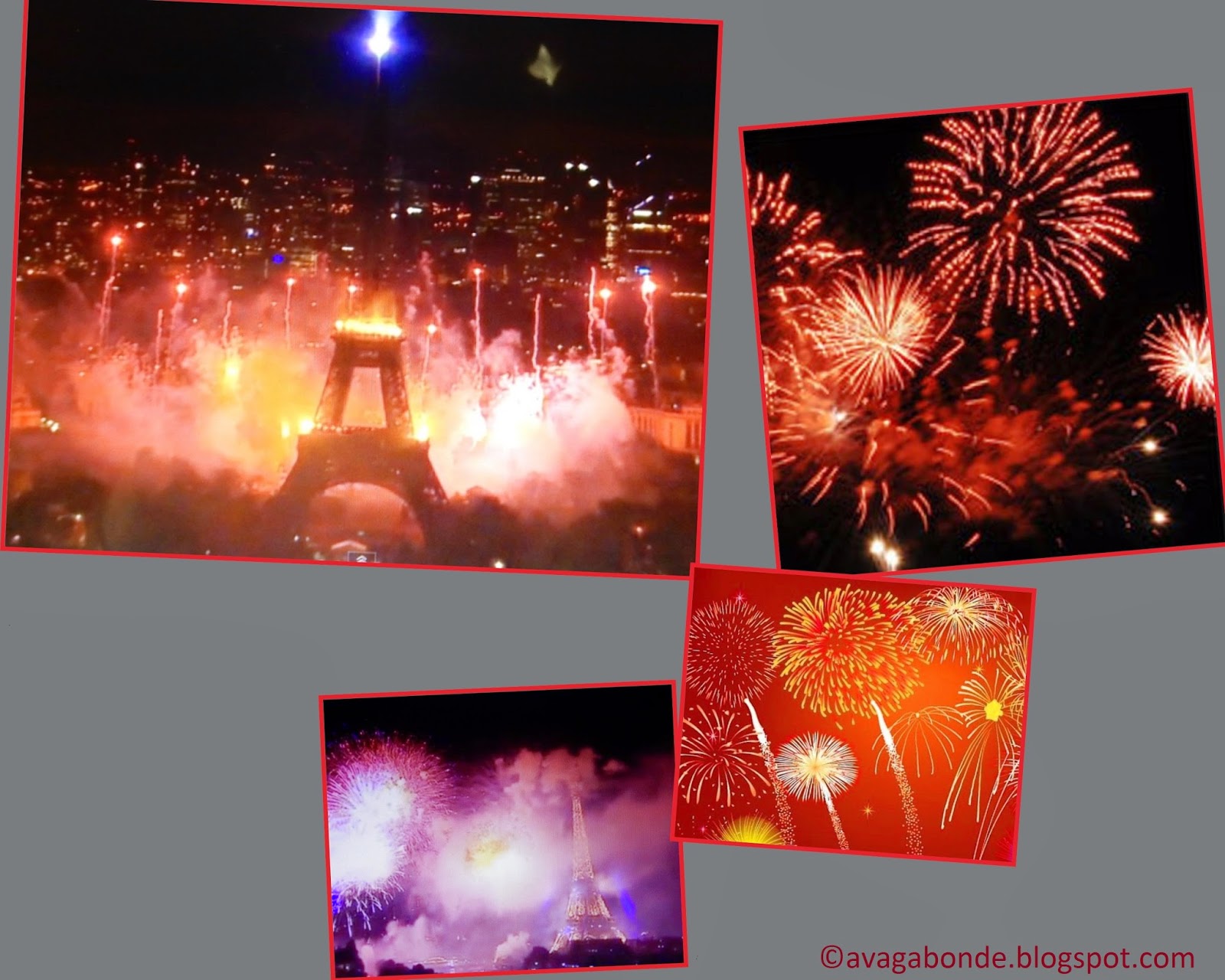 Thank you for showing us snippets of this amazing display.
On the peace front? I still hope - but am not holding my breath.

The fireworks are quite spectacular! This must have been amazing to see in person. I'm glad that you could follow it all on your computer.
I think I saw the start of the construction for the stage at the Tour Eiffel when I was there in June. I was wondering what it was, but never investigated. Now I know.

Magnificent!!! An amazing spectacle and the concert must have been incredible! I live in hope for peace in the world one day.

Hi Vagabonde - I've come over from Karen's blog - and was so pleased to read your comment there about how much your husband is helped via your blog posts ..

The Paris event seems amazing - and wonderful to read about .. and I loved your photo collages too ..

This is the most uplifting post I've read in ages. Long Live France! And thank you, VB, for your wonderful work putting this together so that I could attend as well. Sending you lots of love. :-)

Vagabonde, Nice photos of the fireworks... There was an interesting article in this month's National Geographic on the trenches that still exist from WWI. The soldiers carved a lot of art into the walls. I don't have much hope for the end of conflict around the world. Its all about power, greed, religion or all three...and that's not going away any time soon. FYI...My father is buried in France as he was killed in the final couple of days of WWII. Take Care, Big Daddy Dave

What a fireworks! Stunning!
I liked that the concert was held near the Eiffel Tower,that is a symbol of Paris. The music was well combined with the theme of festive. It's a pleasure to watch the children's faces singing Marseillaise.

I am reading backwards to catch up. How I would have loved to have been at that concert! I saw a bit of video from it (and the fireworks) -- so very impressive! What a wonderful way to end the holiday.

It was as though you were there in person, Vagabonde! I can just imagine how patriotic you felt while watching that spectacle. Now if only all wars could be ended!

Hello Vagabonde..
Brilliant post.
My D.I.L was there on the occasion. She lives between her apartment in Paris and Lisbon.
Married to my second son.
It indeed was a magnificent show.
Thank you for sharing it all.
Let us pray for peace in the world..
val xx

Generally, I'm not one for fireworks or patriotism--but then I relax and realize it's a specific kind of magnificent fun! Your post took me there.

I loved singing La Marseillaise when I was in our Ottawa Choral Society. We did it many times, it's a powerful one!

I love your Paris photos. We visited several years ago. It's a fabulous city!

(ツ) from Cottage Country Ontario , ON, Canada!

Oh, the French do love their fireworks and spectacles and they are so very good at them. Even tiny village fetes here have super firework displays to round off the day before the bal populaire gets going. :)