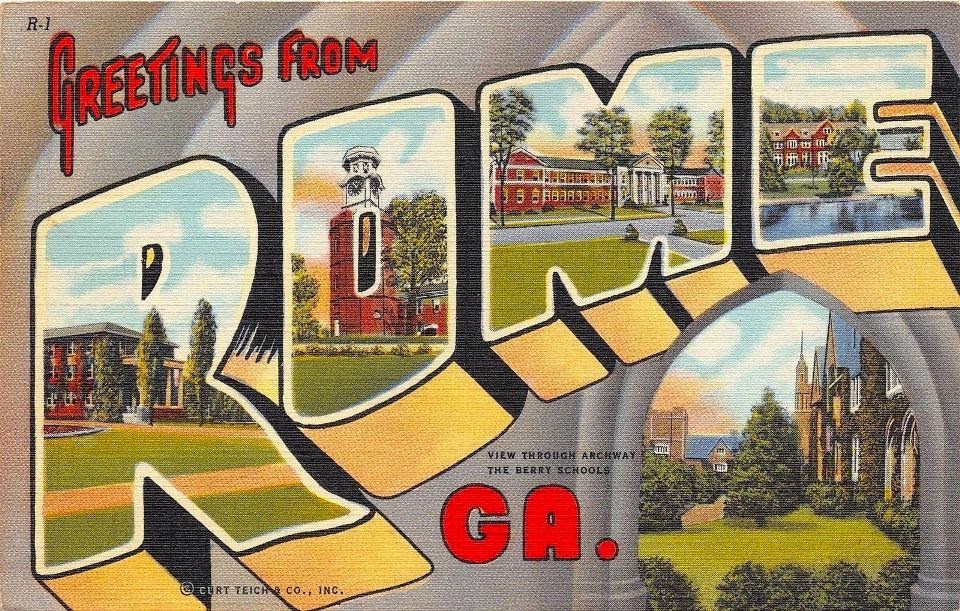 In my last post of November 7, 2014, I mentioned that we would drive back to Rome, Georgia very soon.  However, the morning of our planned visit, 9 November, 2014, I came down with an infection that I battled for a while.  We did go to Rome last Saturday, November 15, as the weather was clear, sunny and mild.  First we went to Berry College and drove on their large campus to the Old Mill.  Trees there had the most beautiful golden colors. 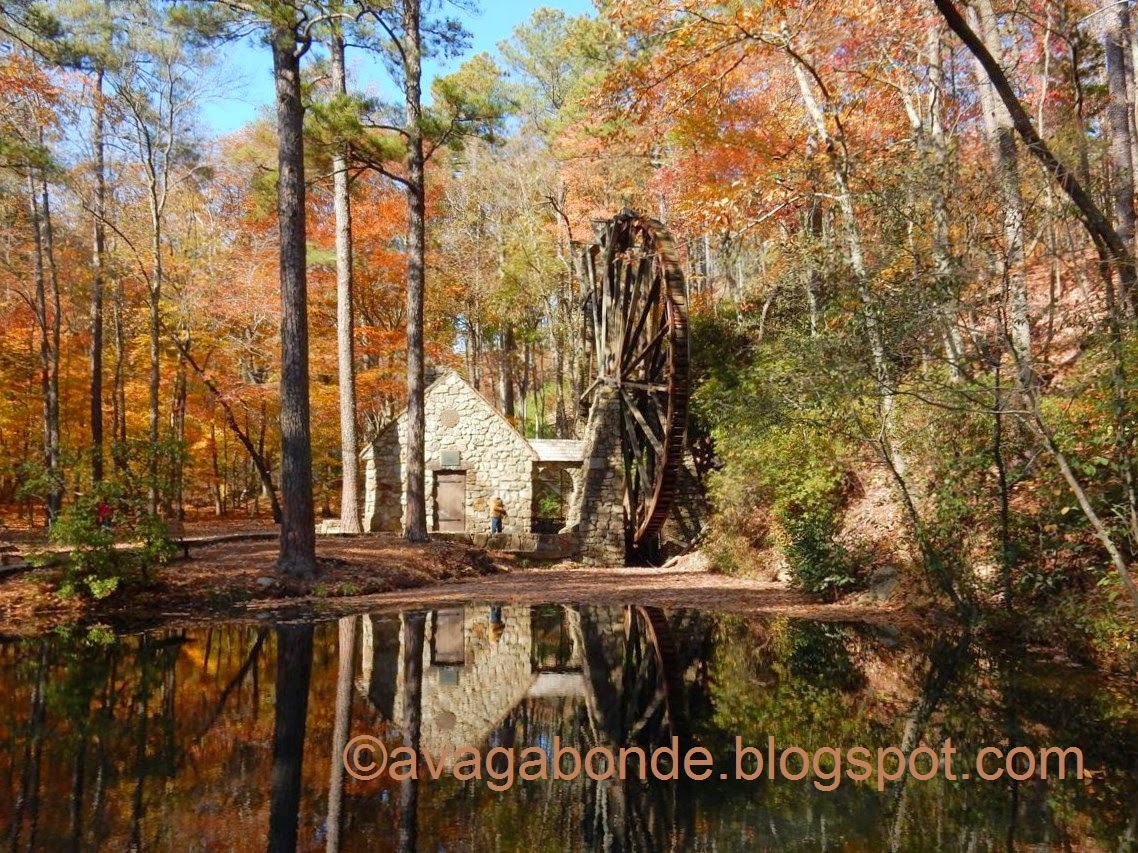 I took many pictures of the Old Mill, and the campus.  I will show them in another post.  Before driving back home we stopped at the historic Myrtle Hill Cemetery where Ellen Axson Wilson, the wife of President Woodrow Wilson, was buried (see her biography in my last post.)  Myrtle Hill Cemetery is on one of Rome's seven hills.  Rome, Georgia, is located about 66.2 miles (106.5 km) northwest of Atlanta and 45 miles (72 km) from our home.  The city was founded in 1834, and named after Rome, Italy, because it was also built on seven hills with a river running between them.  The historic business district is located in the center of town between the Etowah and Oostanaula Rivers but was burnt during the Civil War.  This center was quickly rebuilt.  Below are vintage postcards showing Broad Street as the years went by.  (Click on collage to enlarge.) 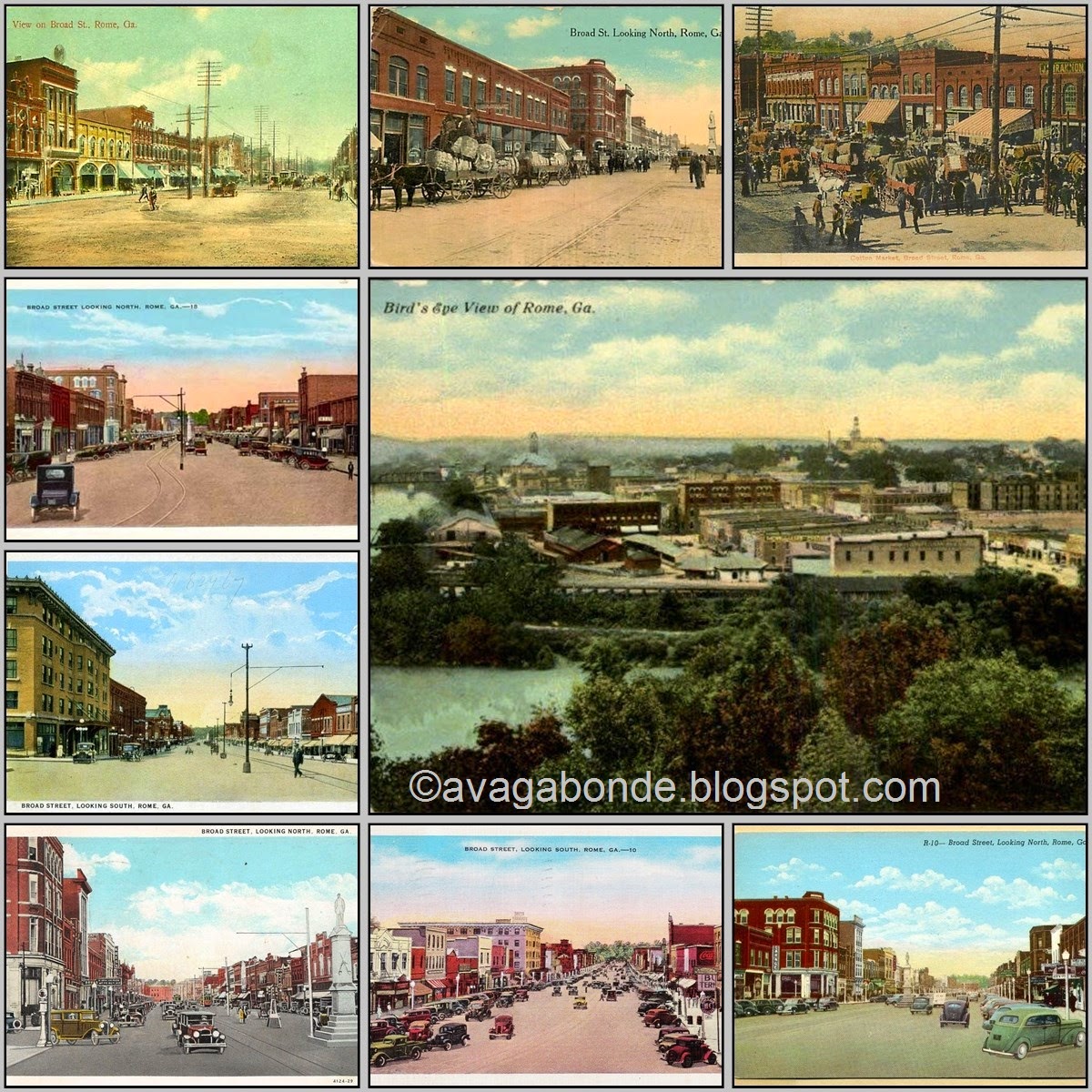 In front of Rome City Hall sits a bronze replica of the fabled Rome, Italy, statue of the she-wolf feeding the baby twins Romulus and Remus.  This statue is called the Capitoline Wolf.   I read three stories about its origins in Rome, Ga.: 1) that it was sent by order of Benito Mussolini, the Italian Dictator, in 1929, when the Chatillon Corporation Silk Mill of Milan relocated to Rome, Ga.  2) Another story is that in 1928 the American Cotillion Company and an Italian company decided to build a plant in Rome, Ga.  Benito Mussolini sent a block of Italian marble to be used as the cornerstone of the new plant - the inscription on this marble was "From Old Rome to New Rome" and later in 1929 he sent the replica of the Romulus and Remus statue.  The third story is that an Italian plant built a rayon plant in Rome, Georgia, and sent the Capitoline statue to Georgia with the machinery.  They intended to place the statue in front of the plant.  Business leaders placed it instead on the steps of City Hall.  The sensibilities of the good Roman, Georgia, citizens were shocked by the frontal nudity of the twins and they placed diapers on them.  Then they decided to return the statue to Rome, Italy.  Because of transportation expense the city decided to keep the statue instead and put up a plaque stating that this statue was a gift from Benito Mussolini.  The plaque reads "This statue of the Capitoline Wolf, as a forecast of prosperity and glory, has been sent from ancient Rome to new Rome, during the consulship of Benito Mussolini, in the year 1929." 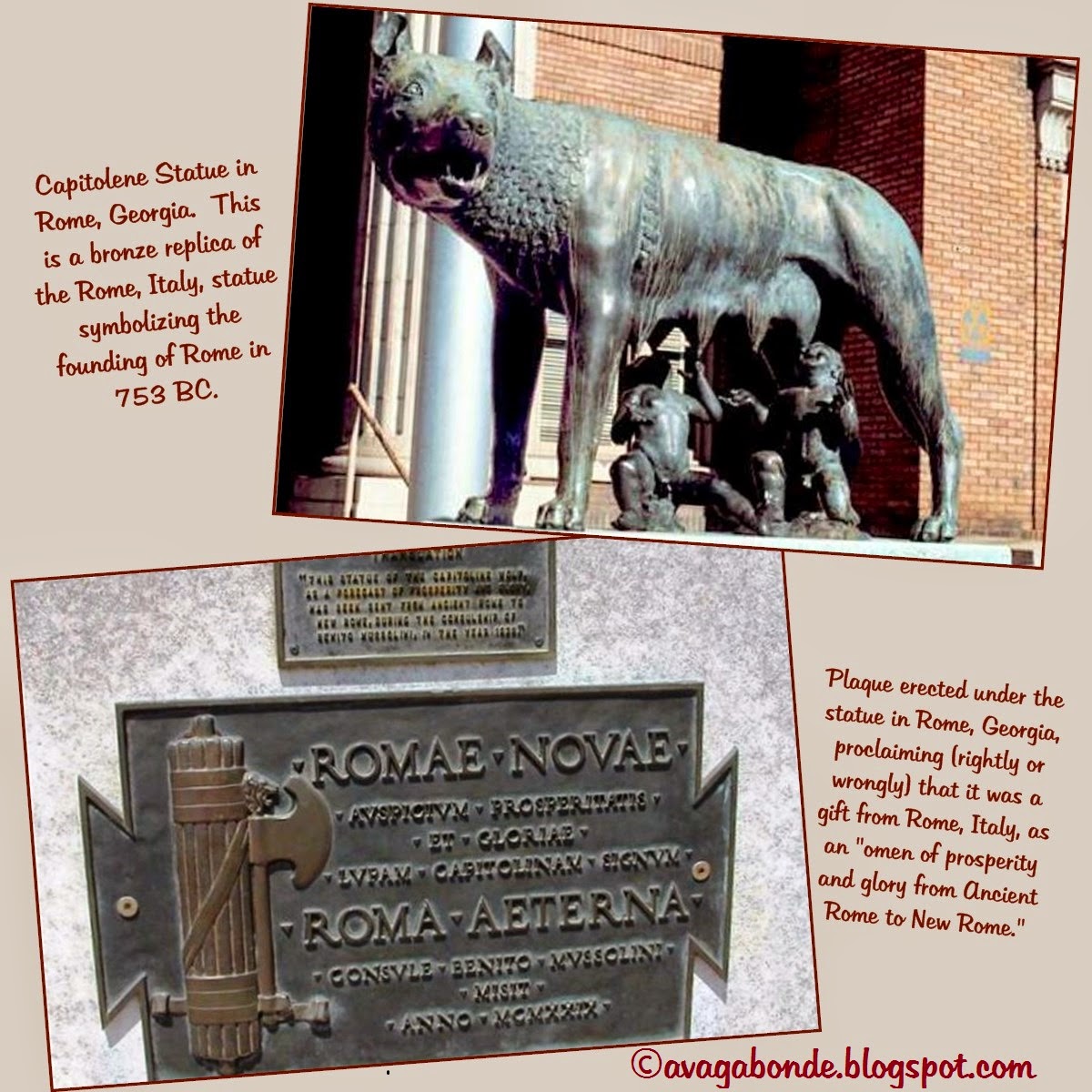 The statue was stored during World War II as some citizens wanted to dynamite it or throw it in the Oostanaula River.  In 1952 it was returned to its original Georgia marble pedestal in the center of town.  Prior to that time though, from the mid 1800s, Rome, Georgia, was a large commercial shipping port with steamships moving cargo to and from Gadsden, Alabama.  Below is an engraving of a steamship on the Etowah and Oostanaula Rivers (which merge in Rome to form the Coosa River.) 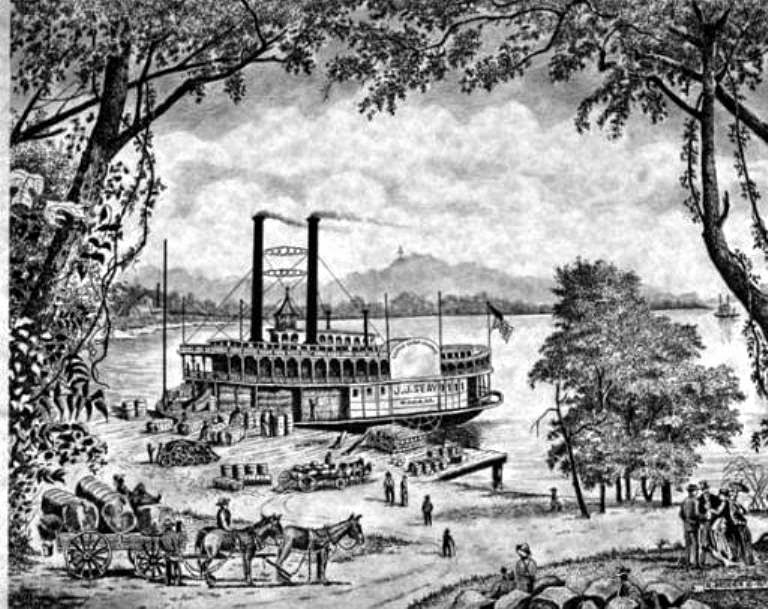 Cotton was also moved by rail.  Below are photographs of steamboats on the Coosa River and other early photographs, courtesy Georgia Archives.  The bottom right photo shows the earliest mechanized Coca-Cola truck in front of the Rome Coca-Cola Bottling Company, circa 1915. Myrtle Hill Cemetery was established in 1857 on one of Rome's seven hills.  Below are vintage postcards of the cemetery. 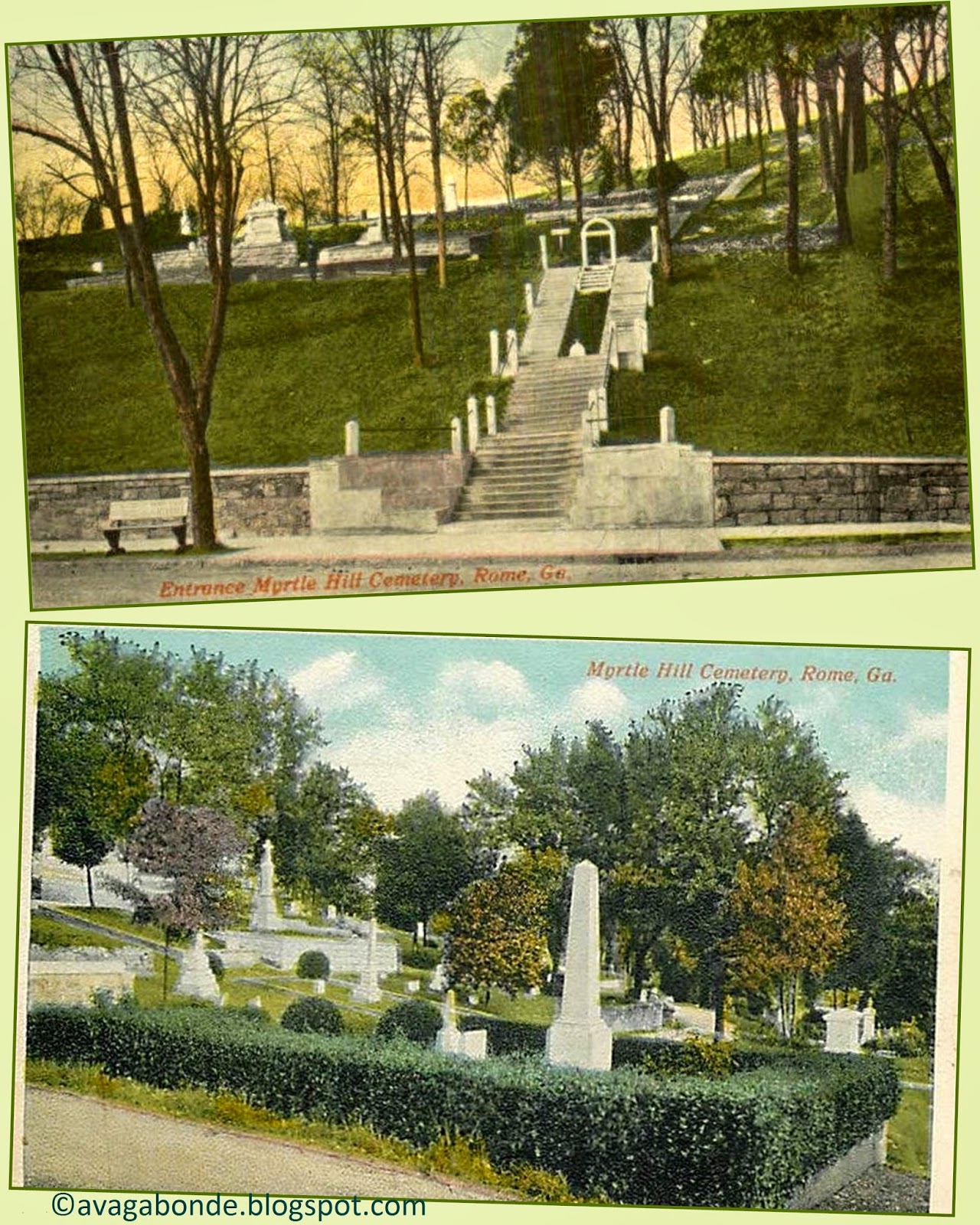 Now there is a road to drive into the cemetery.  A tiny road also goes around and through the cemetery and it is very narrow. 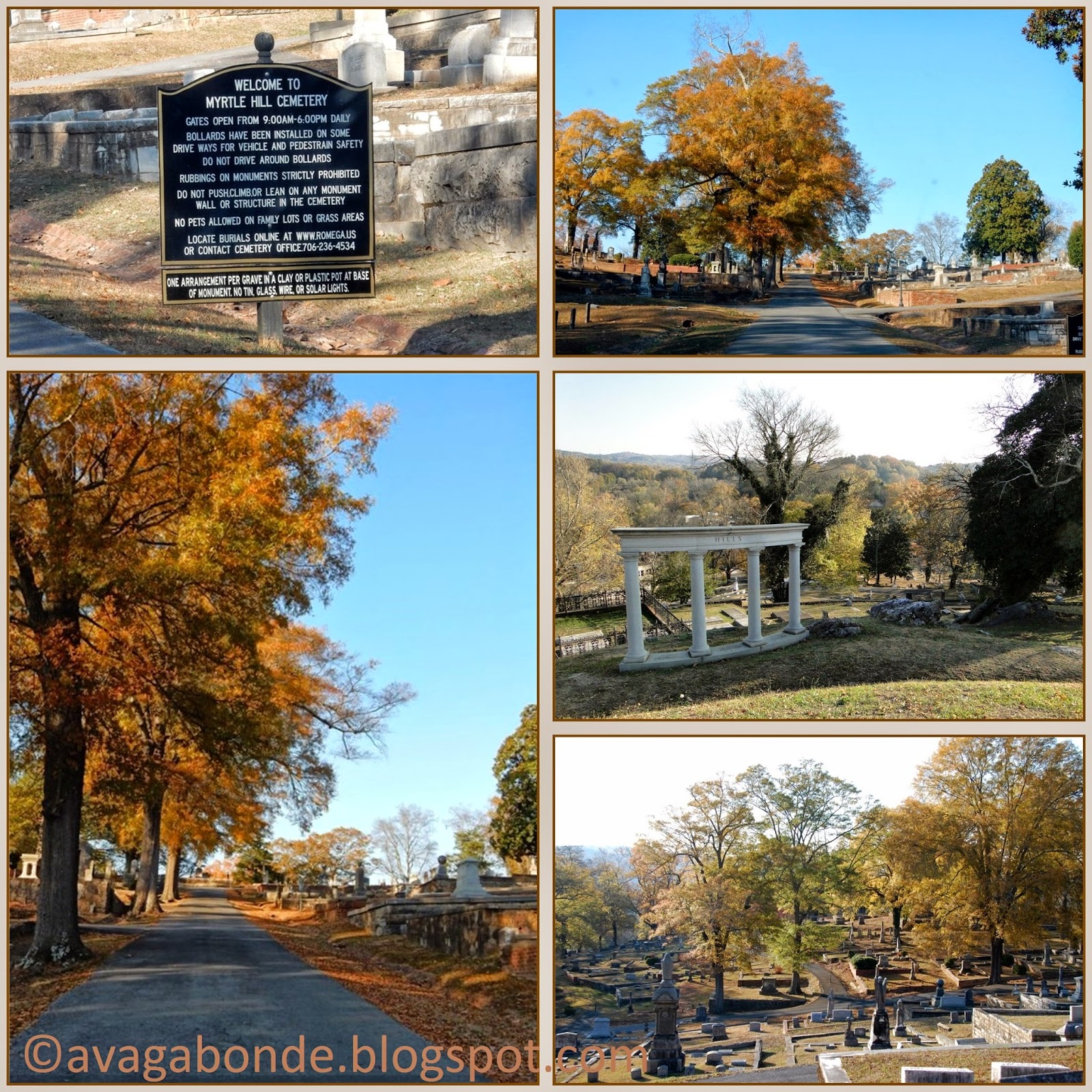 A Confederate monument stands atop Myrtle Hill as a memorial to the soldiers from Floyd County (where Rome is located) who gave their lives to save the town during the Civil War. 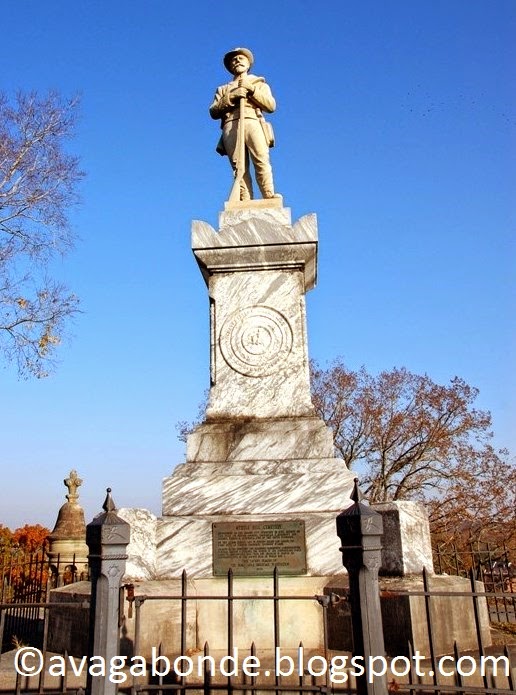 Walking behind the monument you can see a great view of the city below. We walked a bit, looking at the lovely mortuary statues. 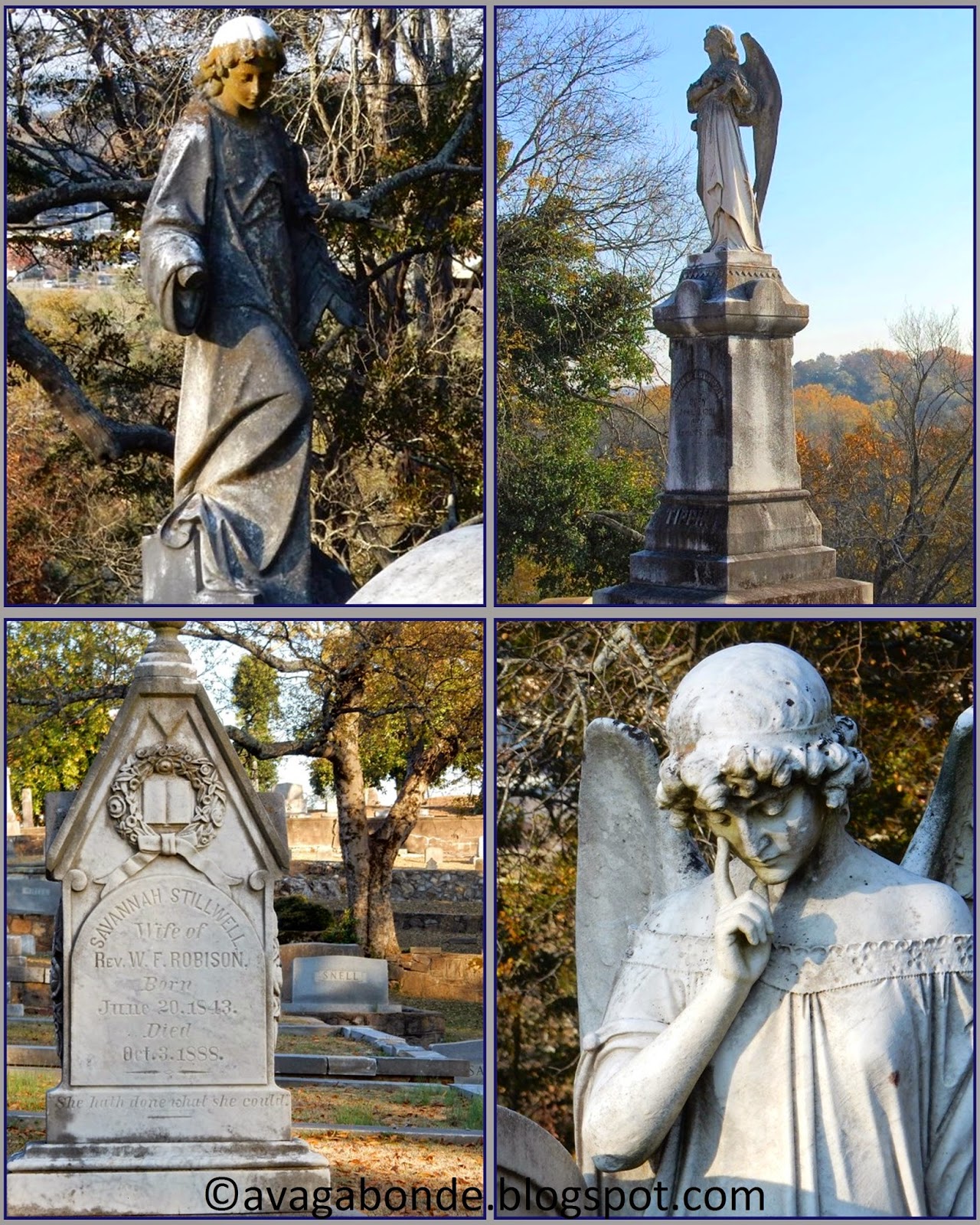 I drove around on the tiny road, very slowly, as it was just the width of the car, and it would have been easy to tumble down the hill ... 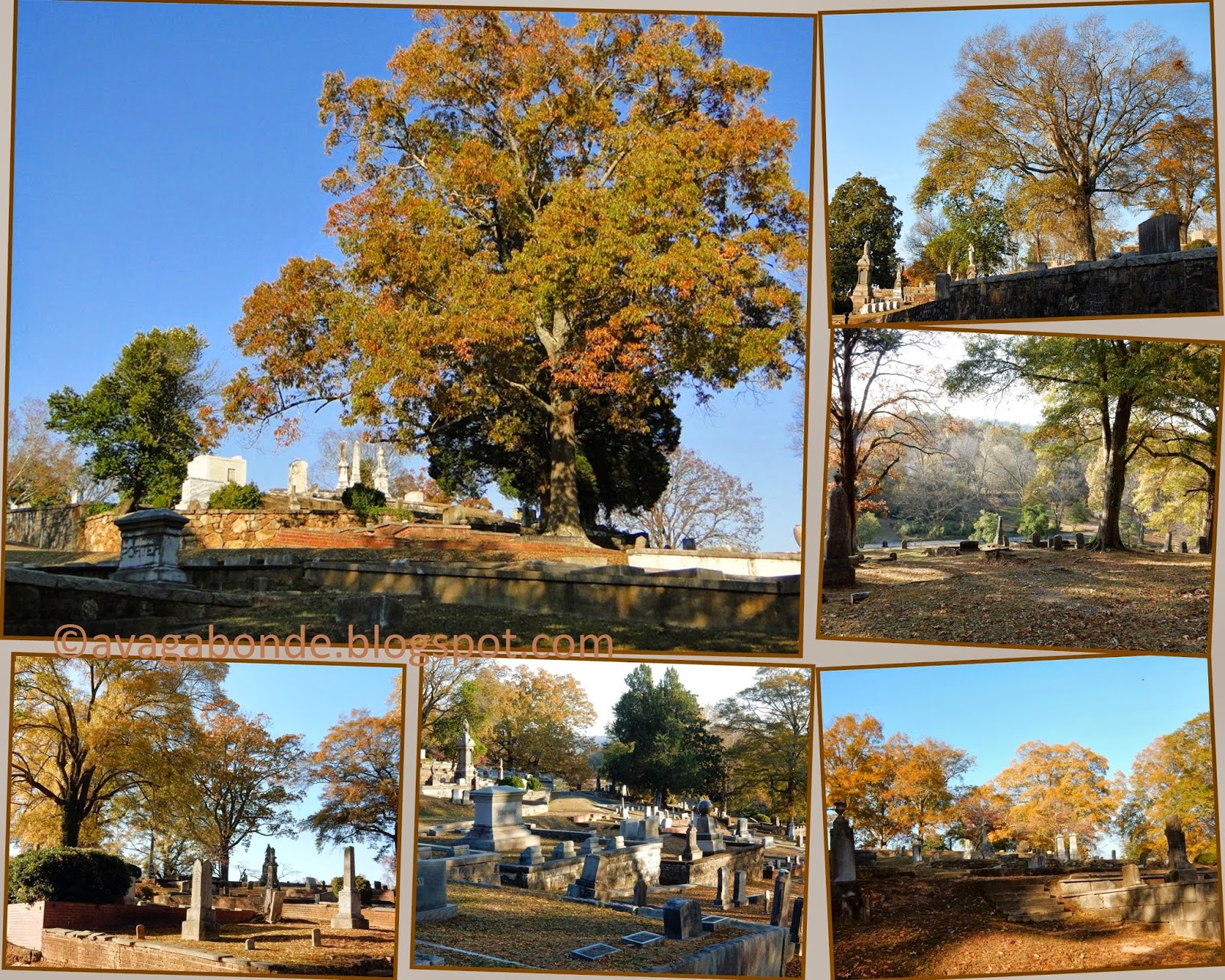 It was getting late, the sun was making long shadows, and the colors in the trees were very warm and soft.  There were no other cars or visitors that we could see. 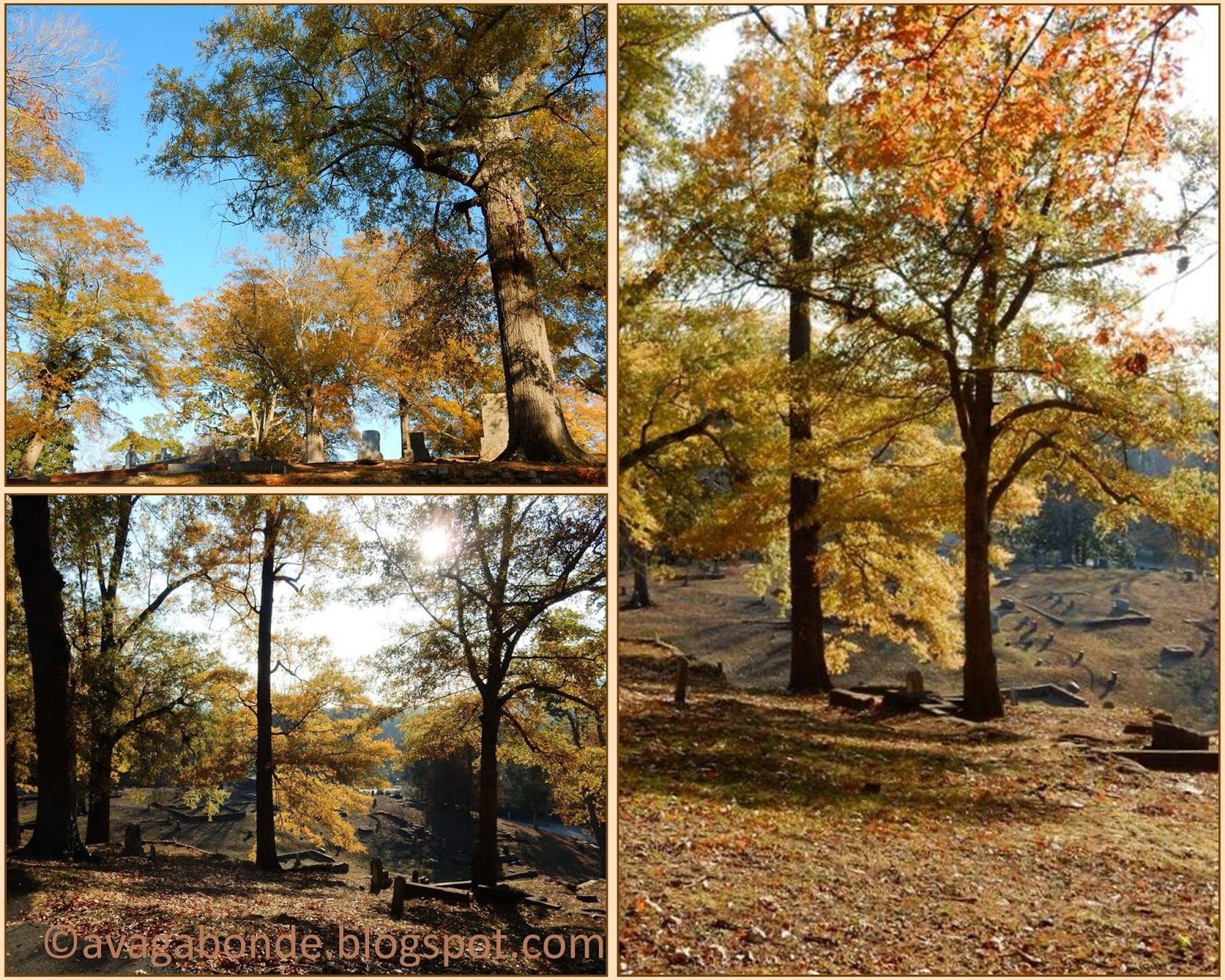 As we drove toward the exit, we stopped the car near a sign showing that Ellen Axson Wilson's grave was near.  I walked to it and took a picture; her father's grave was next to hers.  A bouquet of dried roses stood at the base of her grave.  With the sun shining on it the inscription was hard to read.  I show a vintage postcard below where it is easier to read. 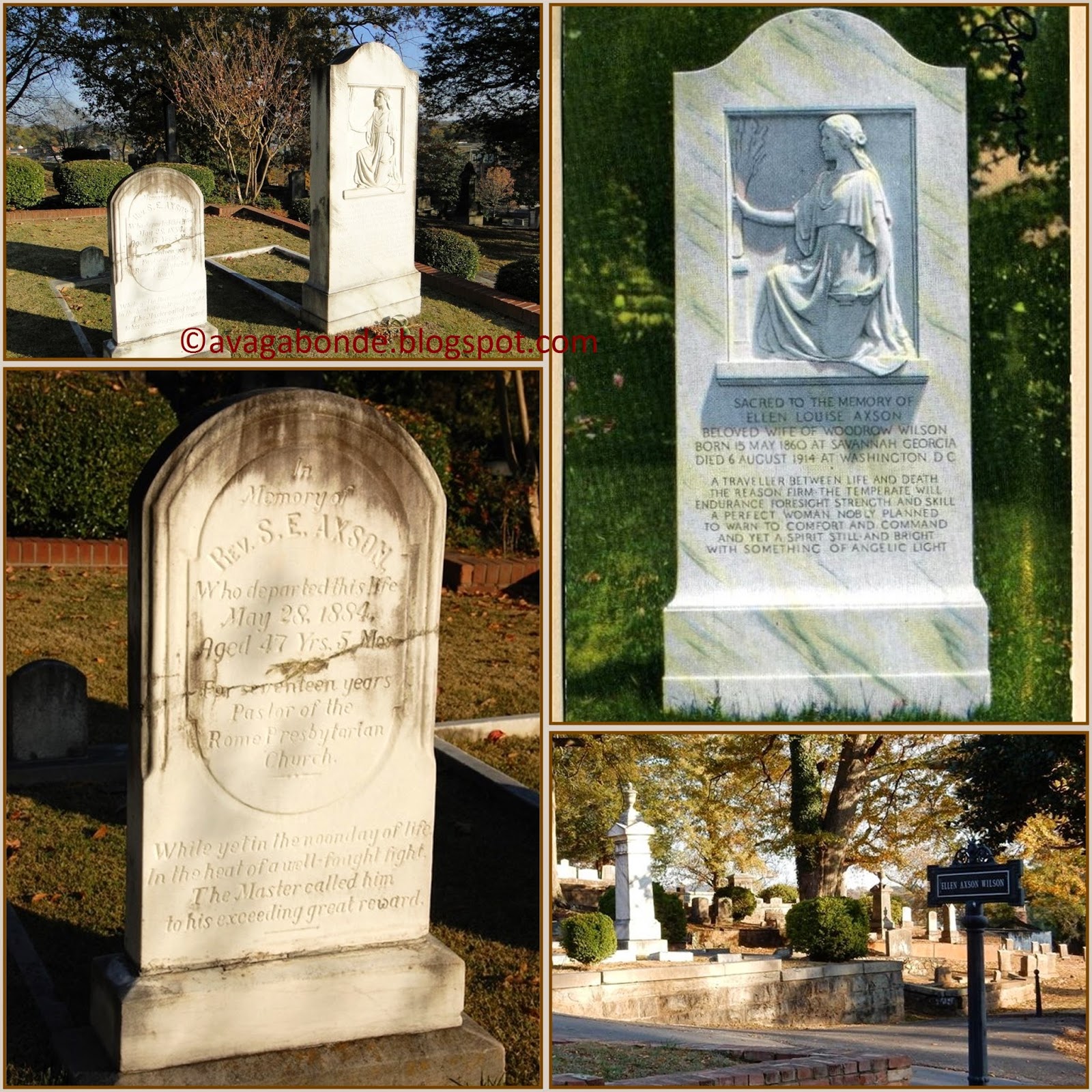 Then we stopped by the graves of 377 Civil War soldiers - both from the south and north. 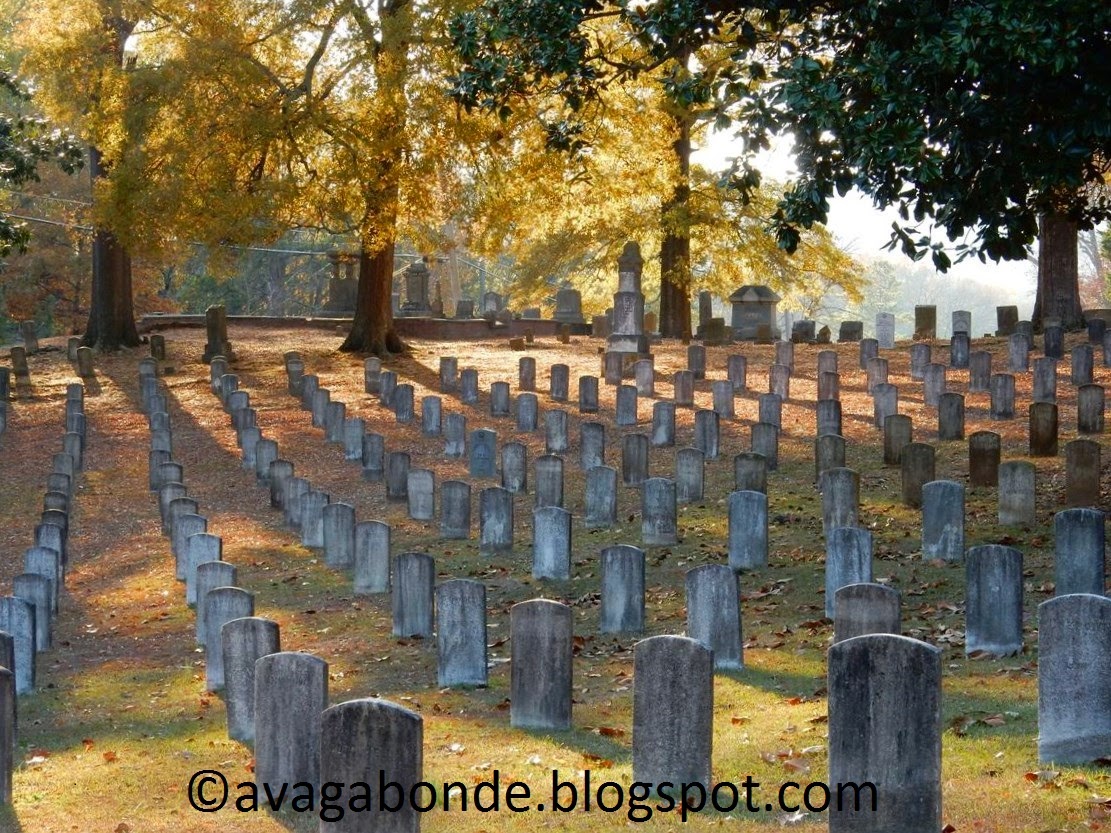 We left and drove through the historic center.  A small restaurant was close by and since we had not eaten since breakfast we stopped to have a late lunch early dinner.  The restaurant is called "Jerusalem Grill."  We had some baba ganoush with pita bread and a gyro plate.  It was delicious.  There were only two other customers there but by the time we left there were quite a few patrons. Below is a mural of Rome, Georgia - an oil painting "The Two Rivers" depicting the Federal Building, the Post Office and U.S. Courthouse, courtesy the Library of Congress.

Many thanks for this well-researched tour. My mother's grandfather was a veteran of the Civil War, a Confederate infantryman, and although mom fled to Berkeley Ca in 1939, the family politics are still divided. I just hate civil wars too.

Hi Vagabonde .. glad you've got over the virus - and then have visited Rome ... it looks a beautiful setting ... and you've given us some wonderful photos ... while lunch looks good - better wait another couple of hours!

I have always wanted to visit Rome, Georgia, and you have certainly helped me do that. Your post is, as always, very details with magnificent pictures and postcards. The graveyard with both North and South soldiers is beautiful and poignant. Thank you, VB. I hope you have recovered completely from your infection. :-)

Vagabonde, Sorry to hear that you had to fight off an infection but glad you're doing OK now. That photo of the mill is just beautiful. I always learn something when I read your postings... I didn't know that Rome GA was named after Rome Italy because it too has 7 hills. Lucky you! We've had a heck of a time finding decent gyros here in the south. Take Care, Big Daddy Dave

I love that mural and also the vintage postcards!

Wonderful post, as always! I had wondered about the naming of Rome, GA. and thanks to you, now I know. The graveyard is Beautiful! Truly! GREAT Pictures, as always!

I'm glad you are feeling better, my dear Vagabonde.....Stay well, my dear, and a Very Happy Thanksgiving to you and yours!

A fascinating place to visit, I was intrigued by the cemetery as I love to wander round cemeteries and visit the past generations. And your late lunch looks absolutely delicious!

Never knew there's a Rome in Georgia. What a beautiful, historic town. Your post, as always, is informative and artistically presented. Thanks for this one, VB!

The mill is amazing - I look forward to your post about it. Since I love cemeteries I enjoyed all the pictures - the angel statues are so beautiful. It reminds me that I want to explore our old rural cemetery where I can actually walk to! I've never done so - it is about time now! I also like the old images of times long gone - very beautiful post.

As usual a very interesting informative post. Thank you Vagabonde.
Funny story re the diapers:)
I have always found cemeteries fascinating and this is a beautiful one. I think my favourite is the one in Paris which I'm sure you know - Pere la Chaise.
The trees are looking gorgeous in your photos.
I hope you are fully better now. Do look after your health.

Ellen sounds a really special lady
a woman before her time. What a splendid partner for Woodrow Wilson and how tragic she died so young. I'm so glad to know something about her now:)

I'd never heard of Rome, Georgia until this post. This is such fun. Your photos are fabulous!

Fascinating post and beautiful tour. Thank you so much for sharing.

Fantastic shop of the old mill! It would make a wonderful jigsaw puzzle! (Thank you for dropping by my blog and Happy New Year to you)

What a beautiful final resting spot. I love the various monuments. I especially appreciate your telling the history with your vintage postcards and old photos. Fascinating