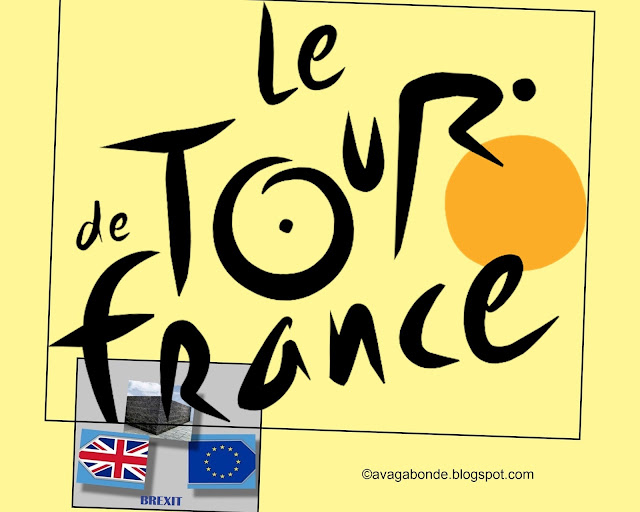 July already - the month of the Tour de France!  This year it started on Saturday July 2, 2016, at the Mont St Michel in France.  By the time it ends on the Champs Elysees in Paris on Sunday July 24, 2016, the cyclists will have run a total distance of 3,519 kilometers or 2,186 miles.  The route will cover 23 stages: 9 flat, 1 hilly, 9 mountain including 4 summit finishes, 2 individual time trial stages and 2 rest days.  The 103rd Tour de France will visit three countries: Spain, the Principality of Andorra and Switzerland.  (Click on collage to enlarge.) 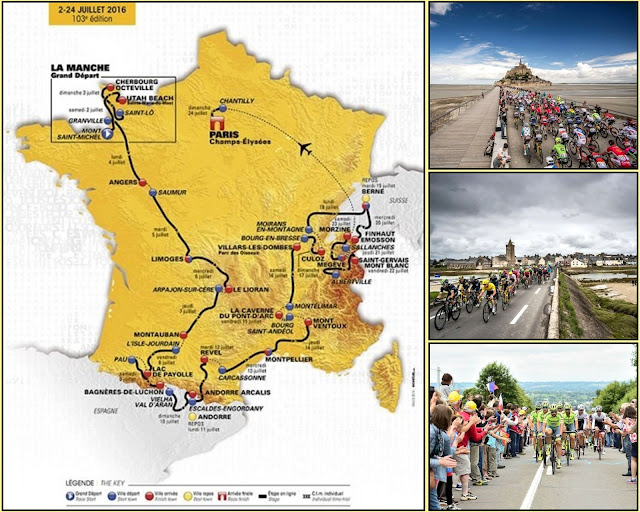 There are 22 teams with 198 riders starting the 2016 Tour.  This year the riders come from Argentina, Australia, Austria, Belgium, Bulgaria, Canada, Colombia, Croatia, the Czech Republic, Denmark, Eritrea, Estonia, Ethiopia, France, Germany, Great Britain, Ireland, Italy, Japan, Kazakhstan, Lithuania, Luxembourg, The Netherlands, New Zealand, Norway, Poland, Portugal, the Republic of South Africa, Russia, Slovakia, Slovenia, Spain, Switzerland, the USA, Ukraine and Wales.  It is truly an international sport even reaching 3.5 billion viewers, live and on television, in 188 countries.  I explained some facts about the Tour in a post in July 2009 - you can read it here.  The first stage, on July 2, 2016, ended in Utah Beach, Normandy.  Photos of Utah Beach and former German bunkers below. 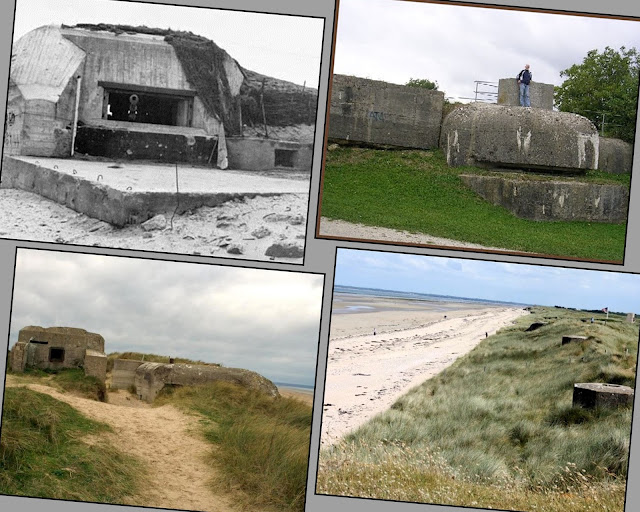 Utah Beach was the code name for the furthest west of the five beaches designated, during World War II, for the D-Day landings of June 6, 1944.  20,000 men landed there with 1,700 military vehicles.  Because of strong winds, they landed almost 2 km south from where the German soldiers were stationed, resulting in only 197 US casualties (or less than 300 overall.)  Mark Cavendish, from the Isle of Wight in the UK won a well deserved yellow jersey for the Tour de France first stage, ending in Utah Beach.  It made him immensely happy, because of the historical significance of the place, and because he had won 27 green jerseys (for sprinting) from taking part in several Tour de France races, but never a yellow jersey, as a winner of a stage. 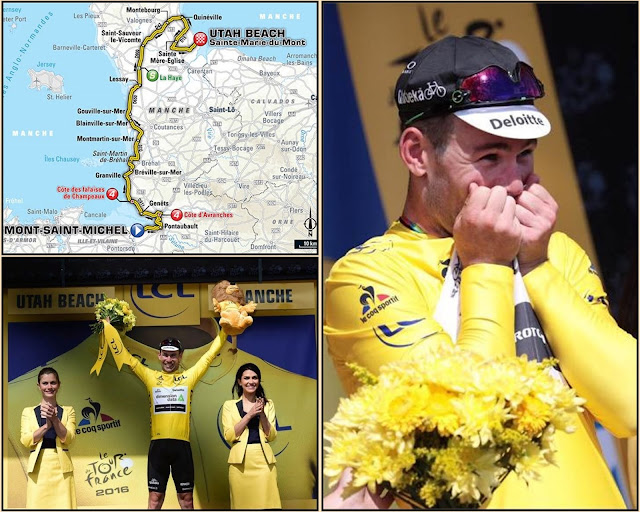 The day prior to the start of the Tour de France, Friday July 1st, 2016, was the 100th year anniversary of another battle, the Battle of the Somme during WWI (north of Normandy, in pink in the map below.) 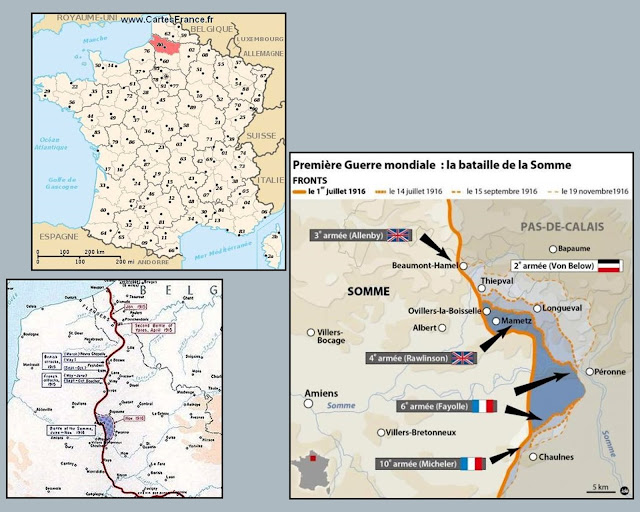 This battle was a lot deadlier.  The battle started at 7:30 am on July 1st, 1916.  The British Army alone suffered 57,470 casualties by the end of the first day, including 19,240 men killed.  The battle lasted 141 days resulting in over 1.2 million casualties on all sides with Allies advancing only a total of five miles.  Four million men, from around the world, were involved in the Battle of the Somme, from Australia, Canada, India, New Zealand, South Africa, etc., in addition to the French, British and German armies.  It is estimated that it was the deadliest clash of the Great War.  (Click on collage twice to be able to read postcard captions.) 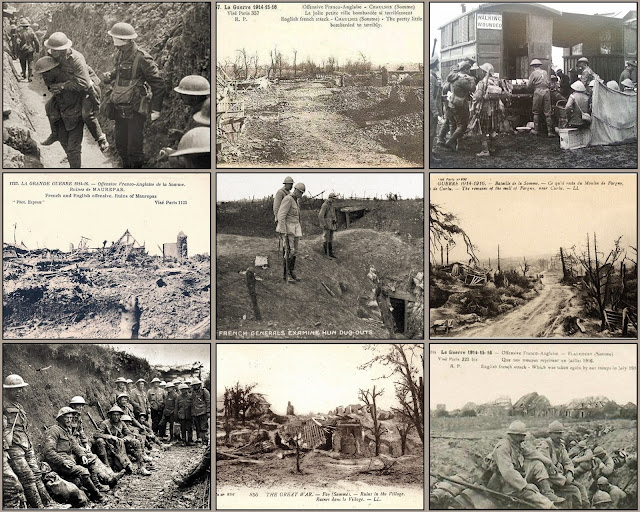 On July 1, 2016, commemorative evens were held in Manchester, London and France.  10,000 guests (half French, half British) were invited in Thiepval, France, one of the main battlefields.  French President Francois Hollande was joined by British Prime Minister David Cameron, the royal couple Kate and William, Prince Harry, as well as Prince Charles and his wife Camilla.  Former German President Horst Koehler was there and Irish President Michael D. Higgins.  Six hundred children (half French, half British) placed wreaths by the graves of fallen soldiers. 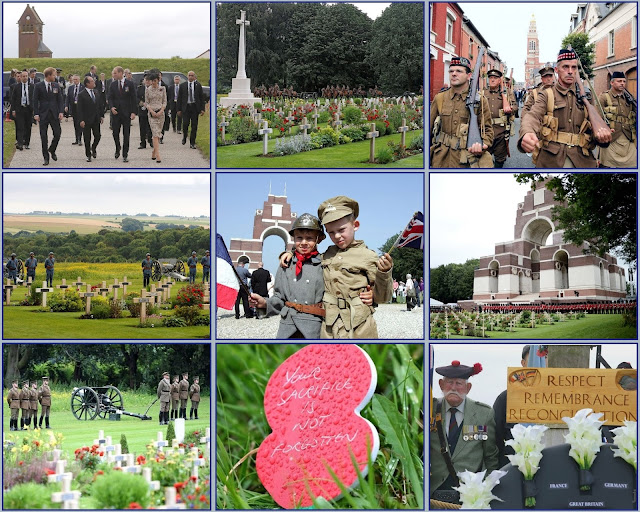 Initially, France was to be represented by Prime Minister Manuel Valls.  But at the last minute, and despite the British people decision to leave the European Union (EU,) French President Francois Hollande came to "show friendship between the French and British peoples."  A week earlier Great Britain had voted to leave the EU, after the Brexit referendum. I'd like to end this post by pointing out that all 198 participants of the Tour started today, July 8th, 2016, in stage 7.  There was no abandon by anyone in the first six stages - a first time in the history of the Tour de France.  A British rider, Stephen Cummings, member of the South African team, won this 7th stage. 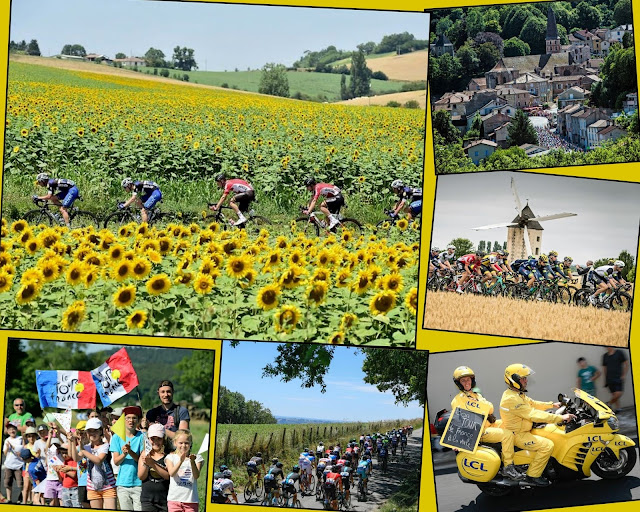 I always look forward to your very informative (and often beautiful) posts. Thank you.
The Somme was a tragedy. One we continue to perpetuate in greater/smaller ways to this day.

I didn't know that there were Australian and NZ soldiers involved in the battle of Sommes. Interesting the reaction of the French towards the Brits after the brexit.
I remember the Tour de France well. It is very popular in Holland

Usually by this time of the year we are in France but this year there have been other commitments and so i am missing the coverage of the Tour de France. So it is lovely toto see your post and be reminded about this important and exciting sporting event! We travel through the area of the Somme every year on our way down to our little house and it is always a drive of somber reflection.my husband's grandfather was killed there and whenever possible we visit his grave at the British cemetery in Bordeaux.

I always so enjoy your informative posts. You have written about the Tour de France before, and I always learn more from them than anything else. It's a treat for me to see your posts pop up in my feed. Sending you lots of love. :-)

I love this time of year, with the tour on the news each evening. We have such fond memories of being there in 2004.
Last week was full of sad commemoration here in Canada for those lost in the battles of 1916. In Newfoundland, especially, where all but 68 of an entire regiment was obliterated at Beaumont Hamel. British commanders had little respect for 'colonial' soldiers and many were lost due to the commanders' arrogance and underestimation of the German strength.

My oldest son's dream at one time was to participate in the Tour de France. He's given up on that idea; he now owns a company that makes bicycle wheels. He still races, just not in THAT race. :-)

And I agree with the other commenters - always enjoy your thorough and informative posts!

Vagabonde, Very nice interweaving the Tour de France with a little history lesson. Other than the magnificent scenery, I just don't understand what the spectators get out of watching a bunch of athletes riding by on their bicycles. At least on TV you can check out the countryside. My wife loves it though and can watch it for hours! As for the Battle of Somme, I just finished reading about how gruesome it was a couple of days ago. It was an article in Smithsonian Magazine in which the author complimented the British Generals for learning from their mistakes at Somme while the Americans ignored the lessons learned and when they joined the War they fought the old fashioned way...losing thousands of soldiers. Take Care, Big Daddy Dave

I've been watching as much of the Tour as I can here up north. I don't have cable but have come to the cousin's house which is fine till Tuesday -- till they come up and probably aren't into it like me. As always, a wonderful post filled with the history too. Just finished a book called "The Storms of War" (historical fiction/Brit and France in WWI). Fascinating.

No bike ride is quite as picturesque as the Tour de France! I was blessed to see it from Mont st Michel the year Cadel Evans, the Australian, won. Doubly exciting. Thank you for your history and attention to detail and your lovely images.

Dear Vagabonde, for years one of my brothers has been a fan of Le Tour, and finally this year (with a bit more early morning free time available) I have begun to watch quite a bit of the daily race. Although I don't fully understand the appeal of this sort of racing (or actually any sort of racing) I am thoroughly enjoying seeing the views of France (and a bit of Spain.)

It is fabulous to have this opportunity for armchair travel and to think for a while of something besides the truly terrible news that is also being televised on other networks.

I will watch some of the tour as the scenery is so beautiful. I have family that will watch much more because they love the sport.

Thank you, as always, for such informative posts! I learn so much from you! Sending you big hugs and much love! I hope everything is going ok!

Vagabonde, of course Tour de France is an important event in sport life in the world. Your pictures show it well. Thank for historical part of your post - Normandy battle was very hard and deadly.
Wait for continuation...

You have here a fascinating combination of this current entertainment with the dark events that took place in the same area 100 years ago. I think the people who plot the route for the tour always show a fine sensitivity to the past. Maybe cycling is one of the only sports that can do that. I think I'll have to watch a bit of the action this year; it's been a while since I followed it.

I always enjoy your Tour de France posts each year. My post this weeks features an event to mark the 100th year anniversary of the Somme. Sarah x

Enjoyed your post on The Tour with all the photos -- especially the one of riders passing through the sunflowers -- so colorful! Also, I appreciated the tie-in with WWII battles. Look forward to your observations on Brexit.