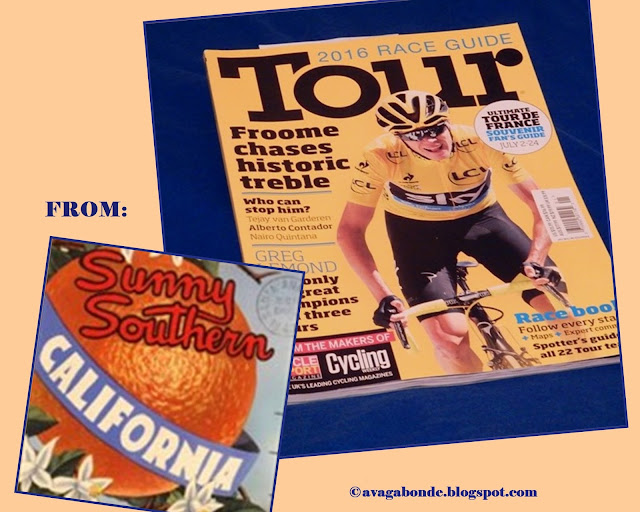 The Tour de France 2016 is over.  I watched the end of it on TV in sunny Southern California.  I did not have enough time before the trip west to read anymore on the UK Brexit (exit from the European Union) so I removed my reference to it from part one of my post on the Tour de France.  I'll write a post on it later.  We went to California for our eldest daughter Celine's wedding.  We departed Atlanta on Wednesday July 20th on Southwest Airlines as the wedding was on Friday 22, 2016.  But the 20th was the day Southwest experienced a massive nationwide technical outage that cancelled over 2,300 flights over two days.  Our trip to California was a ... challenge, and I'll have a post on this very tiring trip soon. 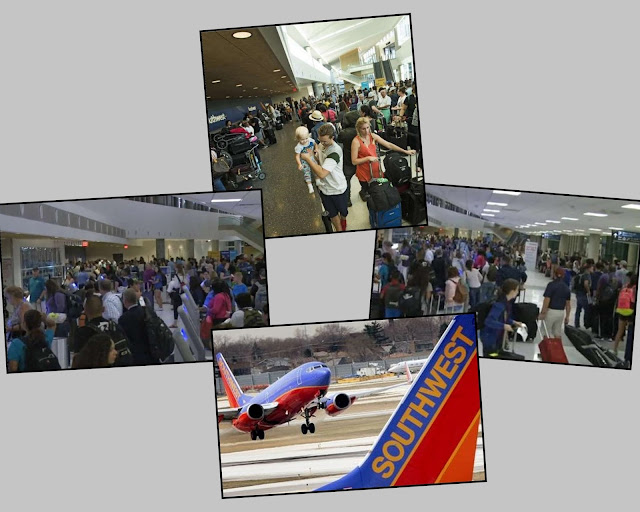 The television screen in our hotel in Mission Viejo was very clear, better than ours at home.  I did take some pictures from it of the Tour cyclists and the lovely landscapes around them.  This year the Tour went through Switzerland and it was a joy to look at its gorgeous scenery.  (Click on collage to enlarge.) 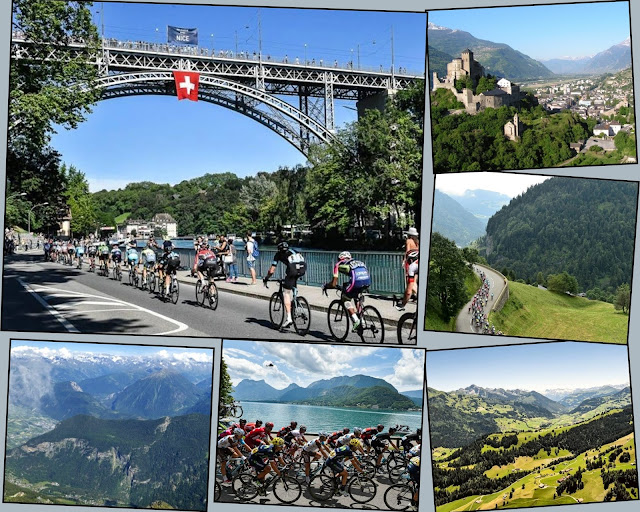 As usual there were many Tour decorations along the route and fans decked out in patriotic and funny themes. 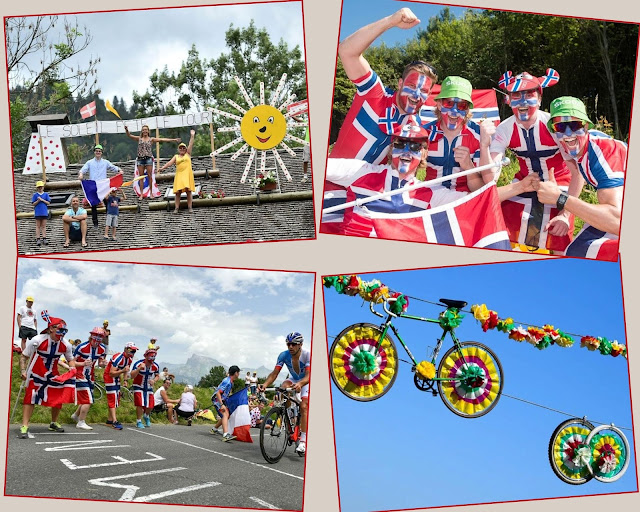 My favorite rider, Slovak Peter Sagan, is mostly a sprinter.  Peter won the Word Championship for Racing in 2015.  He has also won numerous international races as a sprinter, such as in the Tour of California, Tour of Poland, Tour of Flanders, Giro di Sardegna, Vuelta a Espana (Tour of Spain,) Tour de Suisse (Switzerland,) Tour of Oman, Tour of Alberta and more.  He has obtained the most points in the sprint classification of the Tour de France in 2012, 2013, 2014, 2015 and 2016 becoming the first rider to win the classification in his first five attempts.  For the last stage of the Tour he rode a specialized S-Works Venge ViAS bike, emerald green, with green handlebar tape and world champion stripes with Royal deep-section wheels - a bike made especially for him.  He wore the green jersey five times for the final overall rating in Paris.  He is quite a character and can do acrobatics on his bike.  He was born in 1990 and married his girl friend, Katarina Smolkova, in November 2015, in a bike-themed wedding.  He was wearing a medieval Slovak coat, and looked grand; see pictures below. 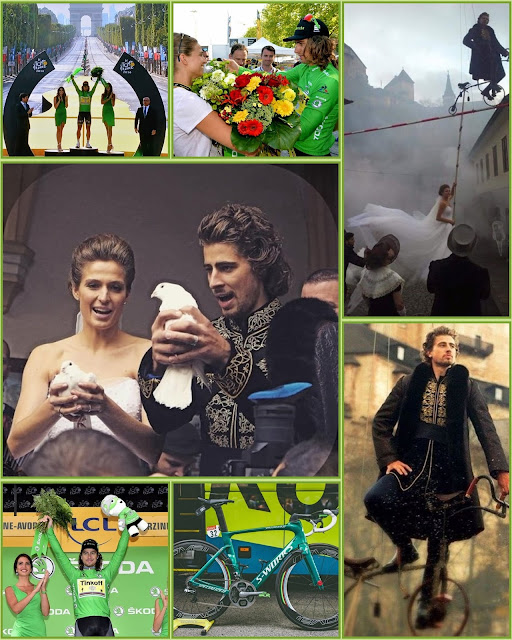 Below is a small clip cut from an advertisement movie Peter has done for a nutrition company.  It may be slow to start, but it is very short.

The Tour de France 2016 ended on Sunday July 24 with Stage 21 going from Chantilly to Paris, 113 km (70.2 miles.)  Because of our traveling and the wedding on Friday July 22 I did not see much of the final stages, but was able to see some of them on television in the evenings.  The castle of Chantilly is one of my favorites and one that I used to go to and visit often while growing up in Paris.  The castle is one of the finest in France and has the largest collection of antique paintings after the Louvre in Paris.  The castle library contains 60,000 volumes, some dating from the 11th century.  The grounds of the castle give examples of garden styles during a period of 300 years.  (Photos courtesy Sophie Lloyd.)  The Tour de France went by the castle on their way to Paris. 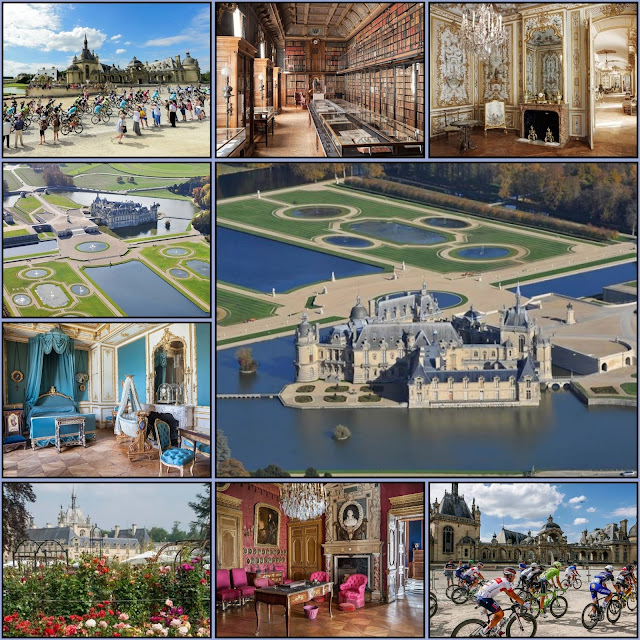 Then as always I enjoyed the views around Paris and in the city itself taken from the helicopter flying over the riders.  They even showed the lake of Enghien-les-Bains, in a suburb near Paris.  My high-school was there, on the banks of this lake. 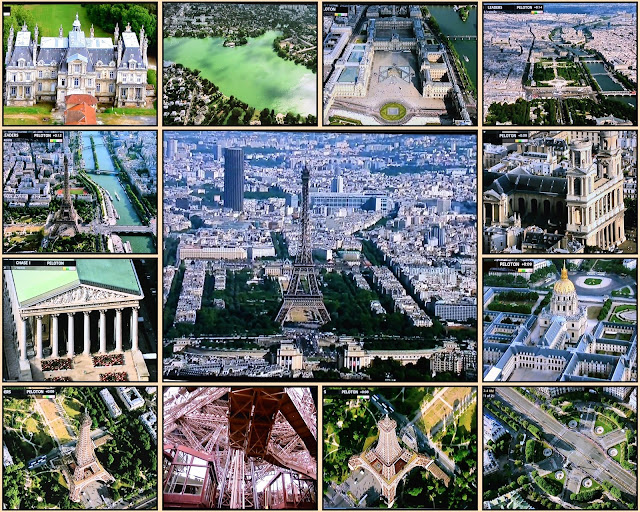 When the riders came out of the tunnel in front of the statue of Joan of Arc in Paris and rode toward the Champs-Elysees the French Air Force aircraft flew over the avenue at the same time. 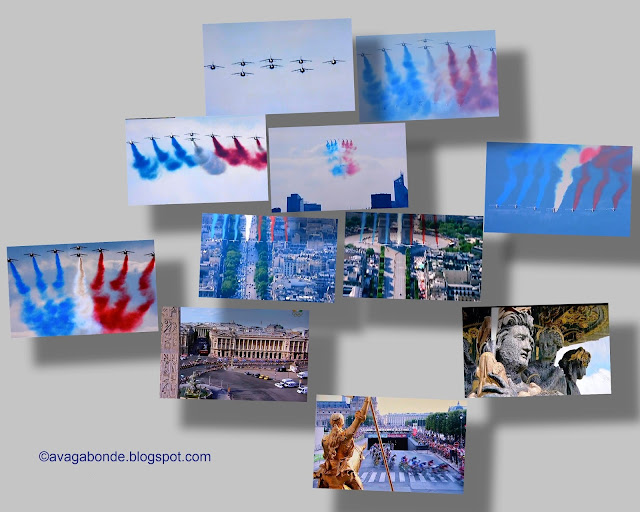 Kenyan/British Chris Froome kept his yellow jersey to the end of the Tour and won the 2016 Tour de France.  He rode with his team and drank some beer instead of the traditional glass of Champagne. 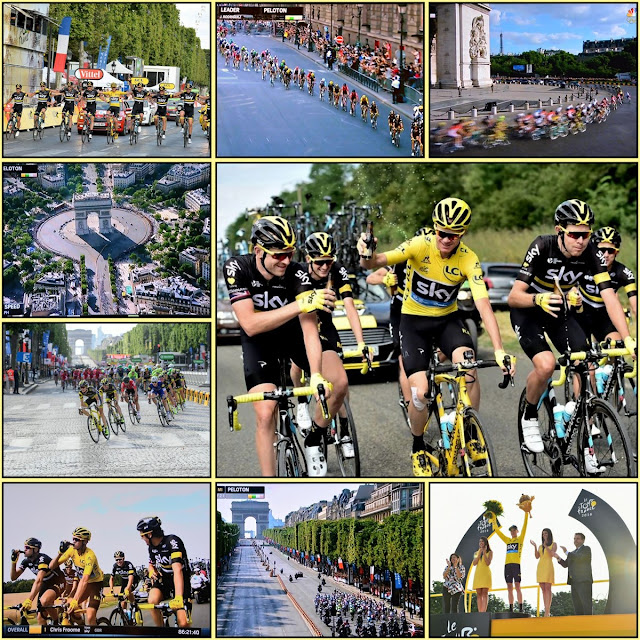 For the last stage of the Tour to its triumphal finish Froome rode a yellow Pinarello Dogma bike with a rhino motif on the head and top tube and a yellow flash on the saddle to match his yellow jersey.  This was Froome third Tour de France overall victory. 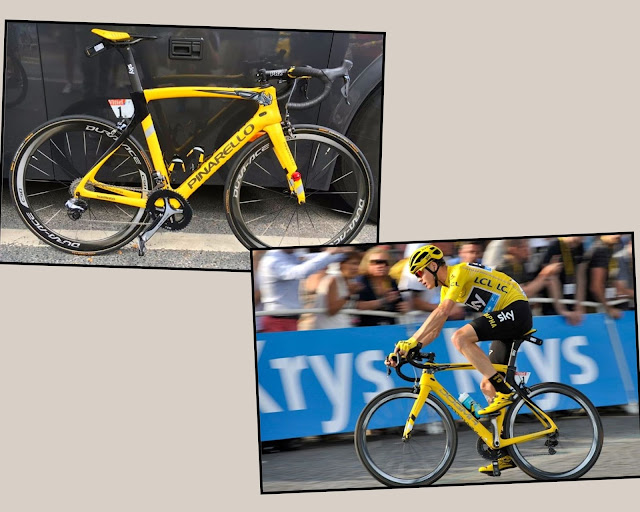 I always think of you when I see that the Tour de France is happening, VB. And you always do such a wonderful job of making it come alive for me with your pictures. I hope your trip to southern California is a good one and I look forward to hearing all about it. Sending you and your family the best of wishes for a memorable trip. :-)

Vagabonde, Congratulations on your daughter's wedding. Best wishes to the newlyweds! Great photos of the Tour de France. My wife spent several hours watching it. I can't imagine what one of those bikes cost... One of my former customers was REI. I looked on-line today and one of their bikes is selling for $5,499.00! Yikes! Take Care, Big Daddy Dave

I love watching the tour. Incredible athletes and beautiful scenery. Gotta love the Norwegians and their enthusiasm.

Best wishes to your daughter on her marriage! It's wonderful that you could be there with her (even if Southwest did its worst).

Thanks for the details on the Tour. I didn't follow it as closely as you did, though I was aware of some of the highlights. Your own connections with the locations like Mont Ventoux and the Paris area bring it to life for me. I got a few glimpses of Mount Ventoux during my trip to Provence last spring, but have not been really close to it.

thanks for all the photos!
best... mae at maefood.blogspot.com

Congratulations to your daughter. I hope her married life is long and happy.
I am sorry that the trip itself was so challenging.
Thank you for bringing the Tour to us again. Love the scenery, while knowing less than nothing about the sport.

Thanks dear for all the great info. and pix on the Tour. It went through my brother's village near Carcassonne.

I hope your daughter will always be happy - I send her my congratulations!

Vagabonde, congrats to your daughter Celine wedding and to all your family!
I wish her long and happy marriage. I didn't see this tour de France and have read your story with interest. I loved your collage of the castle of Chantilly, very impressive and beautiful, you were lucky to live in such place.

Congrats on your daughter's wedding! All the best!!! That castle is gorgeous! Would love to see it in real life! Wow! Sending big hugs and much love!

stopped by and was happy to find a brand new post to read! Best wishes to our daughter and am so looking forward to seeing pictures of the wedding, hope you share them with us! Enjoyed reading all about the Tour, some really good pictures there and I learned much about it I didn't know before. Such beautiful scenery they get to enjoy as they race isn't it?

will be waiting for your post about so cal - ...and hope your daughter has a beautifully long married life. I really enjoyed the post and watching the video on Peter. You always explain things so well with images to go with your words.

I always love your Tour posts! I didn't know about the Peter Sagan wedding or video -- thanks for posting that! And as always, your photos are wonderful.

Congratulations on your daughter's wedding. I'm sorry you had so many hassles with the flights and all. I'll look forward to hearing more!

I loved Paris!
We'e been watching the Olympics. The kids were over and watched some too, as they don't have cable.

I watched some of the Tour on TV while I was first recovering after hip surgery. Those bike riders are true athletes to accomplish riding in so many different geographic areas. And such wonderful landscapes to be seen. Ahhhhh I really must visit France again soon!