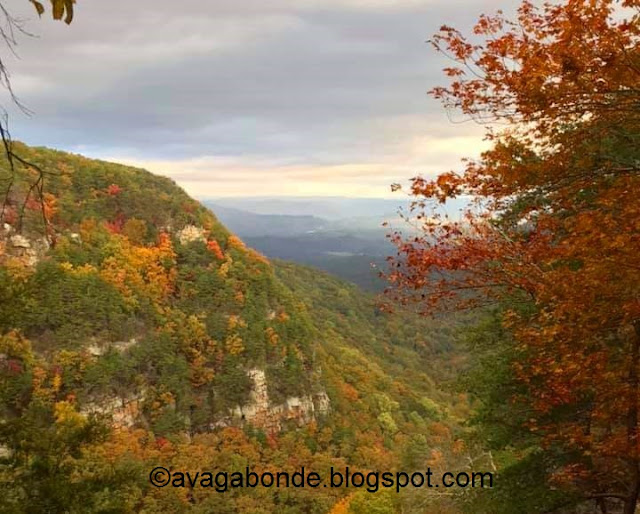 Last week, after my walk in Nashville Centennial Park, I was going to visit another park to catch more fall foliage.  Unfortunately it rained, then after a couple of blustery days, most of the leaves had blown off the trees.  My little Autumn Glory maple tree that was planted last year had colorful leaves but two days later they were all gone. 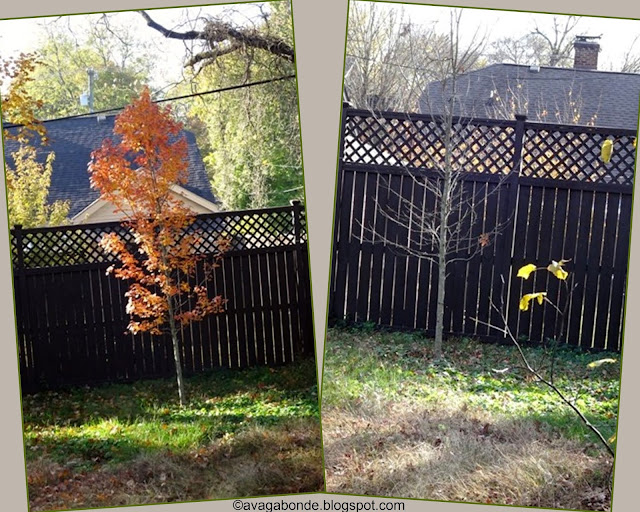 Not long ago I read an article saying that just looking at still photos of nature could lower stress levels.  A study in the Netherlands at the Vrije University Medical Center showed that by looking at images of nature for several minutes it had a calming effect on the brain.  A professor at the University of San Diego said "There are studies that show that looking at pleasant images can provide a type of mental escape for individuals during times of moderate stress."  Then I read that a small team in the Department of Psychology at Canada's University of Waterloo discovered that enjoying nature through virtual reality such as photographs "engages the parasympathetic nervous system which helps us relax, as opposed to the sympathetic nervous system - in charge of "fight or flight" responses and releasing adrenaline and cortisol."  Right now, with our stress related to the virus, politics, weather and more any calming effect is welcome.  I looked at my autumn photographs to find a pretty one. 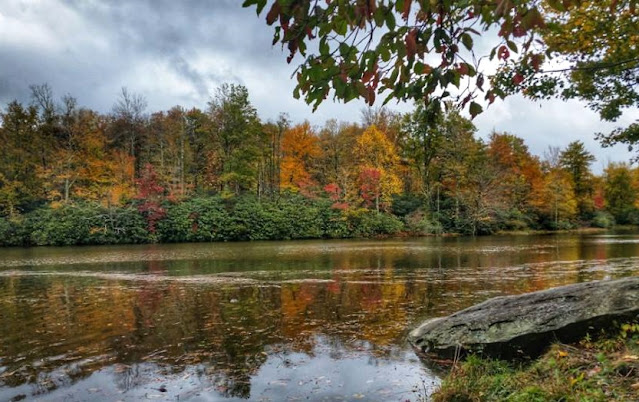 While looking I found many photographs of Cloudland Canyon State Park that I had taken a couple of autumns ago.  As you may recall, while driving back from Atlanta to Nashville, I would stop in Trenton, a small Georgia town in the mountains where I would sell some of my books at a second-hand bookstore.  To get there I had to drive through the Chattahoochee National Forest in Georgia and then drive around several switchbacks and steep ascents, pass by Cloudland Canyon State Park then descend toward Trenton.  Cloudland Canyon is located in Rising Fawn, Georgia, on the western edge of Lookout Mountain.  It was named after the child of a Cherokee Indian chieftain.  The Cherokee Nation occupied the area then and their custom was to name their child after the first thing they saw.  So at dawn, the chief saw a fawn rise from its bed and thought that he hadn't seen anything more beautiful.  He gave the name Rising Fawn to his child.  After the land grab by the white settlers the Cherokees were banished from their ancestral land and sent to reservations provided by the US Government in Oklahoma.  Their route came to be called the Trail of Tears. 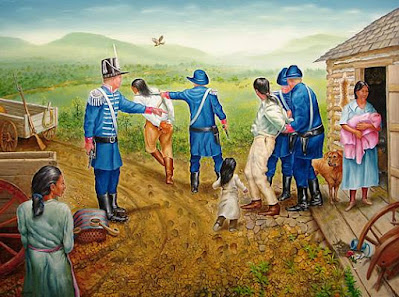 The village had several names until it finally was changed to Rising Fawn to honor the Cherokees.  It is located in the northwestern part of Georgia, close to Alabama and Tennessee.  Starting in 1939 the state of Georgia purchased parcel of lands close to Rising Fawn for a state park.  The Civilian Conservation Corps then worked on connecting highways to Cloudland Canyon State Park. 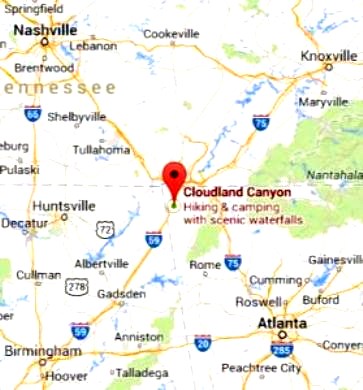 That November I left early for Trenton and decided to stop at the park.  Years before, in winter, my late husband and I had stayed there for a long weekend, but I had taken few photographs.  Armed with my Nikon and cell phone, I was going to take photographs this time.  GA Highway 136 to Cloudland Canyon is narrow with sheer drops down the mountain on one side, and it's a bit scary.  On the map below I placed a green cross where the state park is located, to the right of Trenton.  (Click on collage to enlarge.) 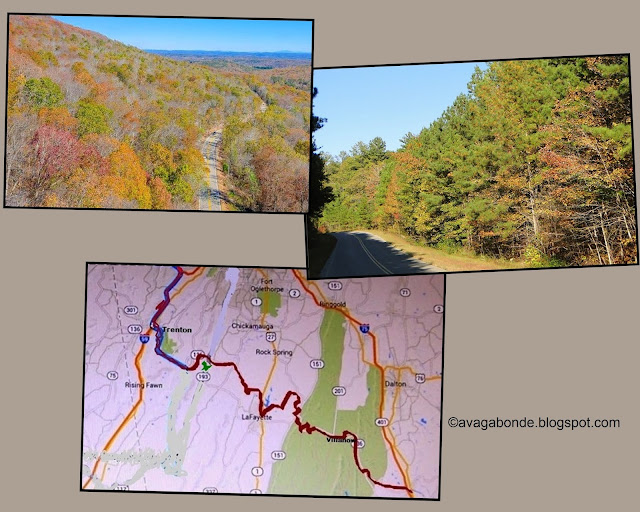 After parking my car it was just a few steps to the spectacular panorama.  With 3,488 acres, Cloudland Canyon State Park straddles a deep gorge cut in the mountain with elevation going from 800 to 1,980 feet.  It has cascading creeks, dense woodland, wild caves, sandstone cliffs, 1000 feet deep canyons and two stunning waterfalls tumbling over layers of sandstone and shale into pools below.  The views are breathtaking. 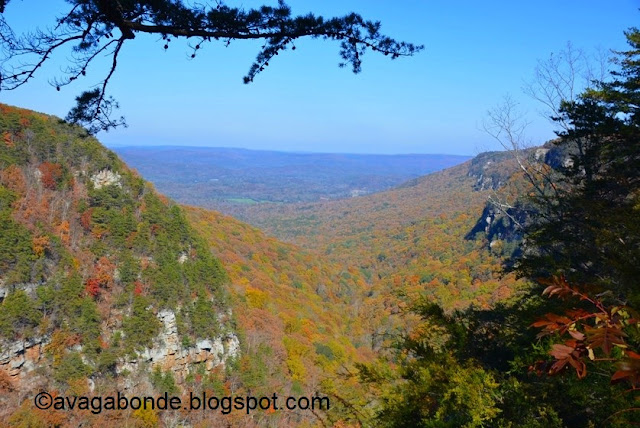 As mentioned above my late husband and I had stayed in one of their cottages.  Now they also have yurts and offer campsites for tents, trailers and RVs, as well as backcountry and pioneer campsites.  There are picnic areas and shelters, a gift shop, 16 miles of horseback riding trails, fishing, caving, canyon climbing, and more.  Below are a cottage interior and a yurt and yurt interior. 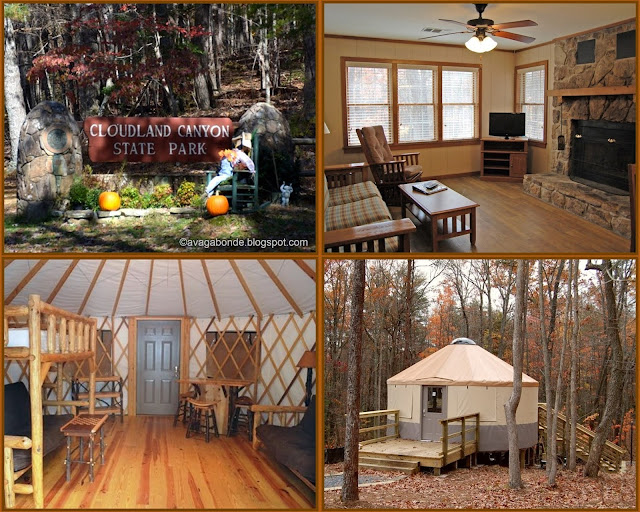 Near the information panel I could get a glimpse at one of the waterfalls. 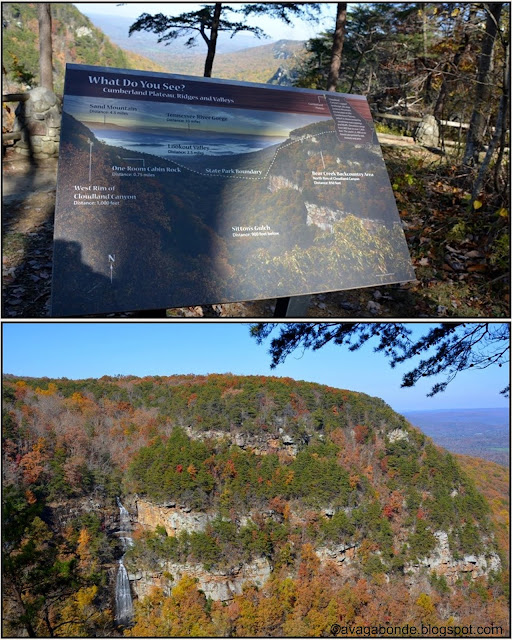 I walked a bit to the side to get a better view. 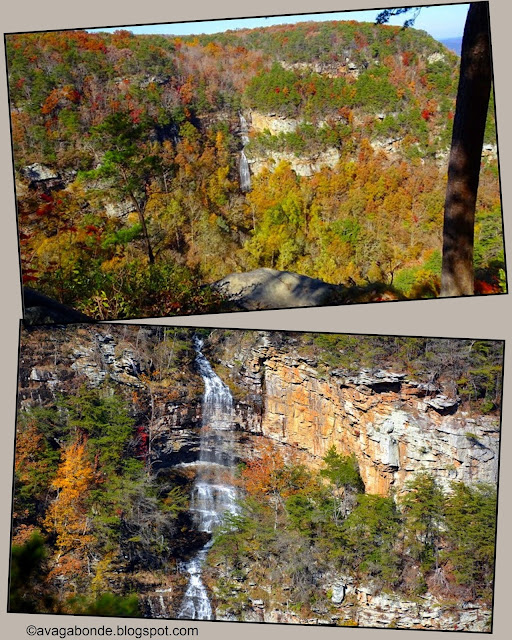 The other side of the canyon was also quite scenic, but I did not want to get too close to the edge. 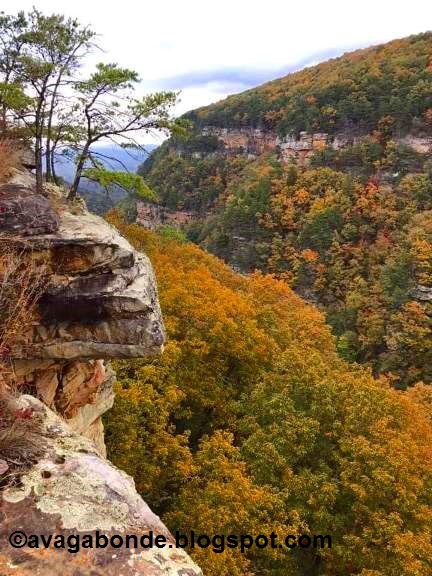 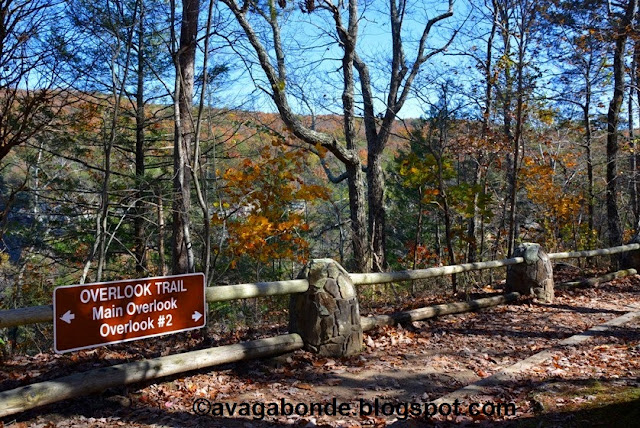 At first the trail was paved and smooth.  Then it became rocky and lead to some stairs.  There were too many steps for me ... 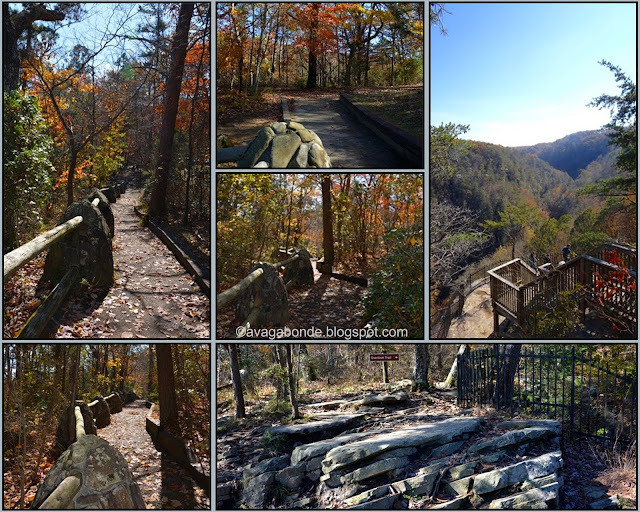 I turned around and went to sit nearby for a little rest. 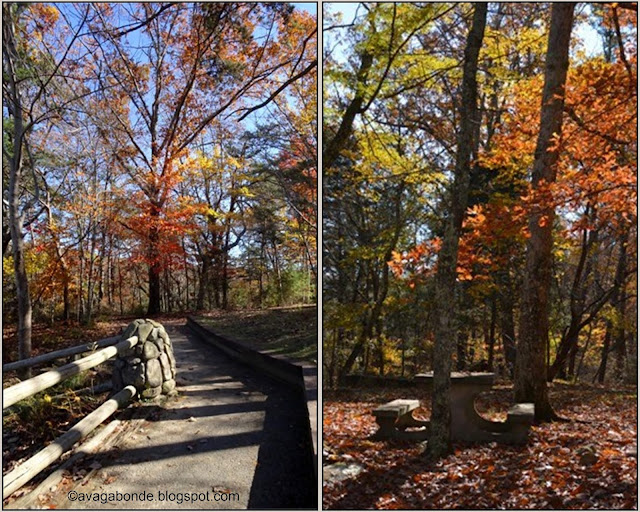 I had not the time or the energy to take the heart-pumping Waterfall Trail.  You have to climb down, and back, 600 stairs to the bottom of the canyon to see the two waterfalls, Cherokee Falls and Hemlock Falls. (Photo courtesy GA State Park site and Atlanta Trails.) 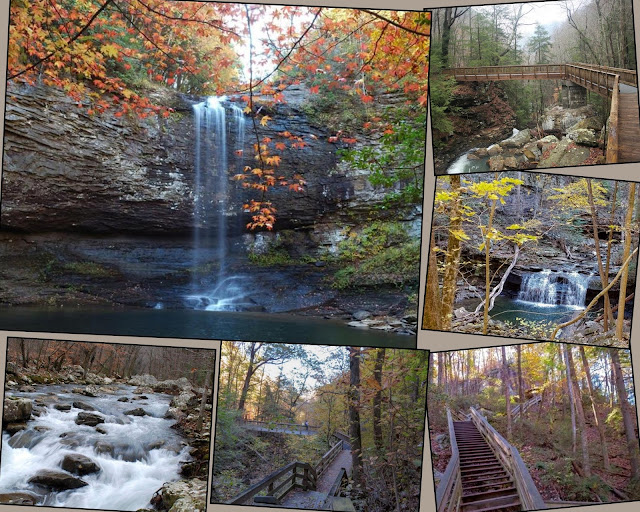 If you are adventurous, there is more to do in the area.  Close by is the Lookout Mountain Flight Park.  It is the largest and most popular hang gliding and paragliding school in the United States.  They state that each year the school teaches, certifies and solos five times as many pilots as any other school.  The hang gliders launch from 1,340-foot McCarthy's Bluff.  It is as small business owned by the same family since 1980.  (Photos courtesy LMFP.) 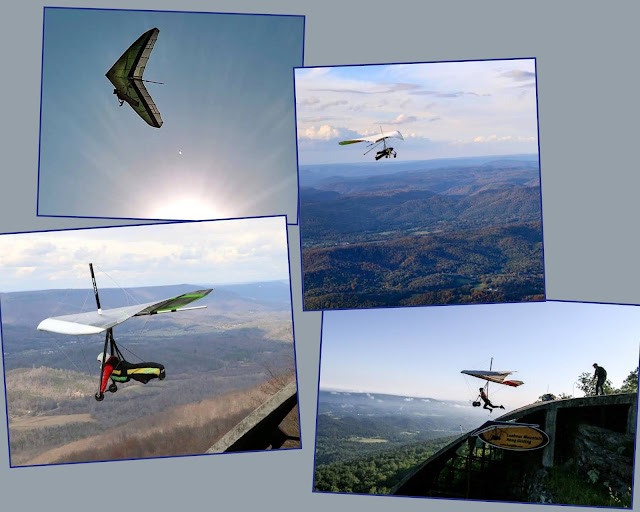 Thrill seekers can fly tandem 3000 feet over Lookout Mountain.  I'm sure the view must be gorgeous from that height.  Maybe my blogging friend and parachute jumper DJan would not think twice about hang gliding there? 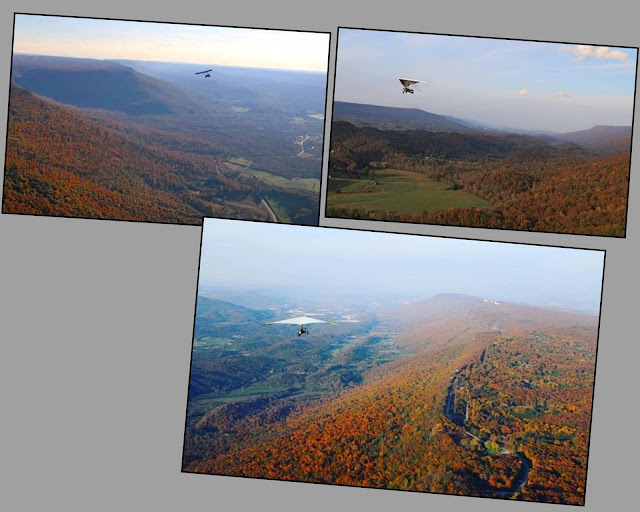 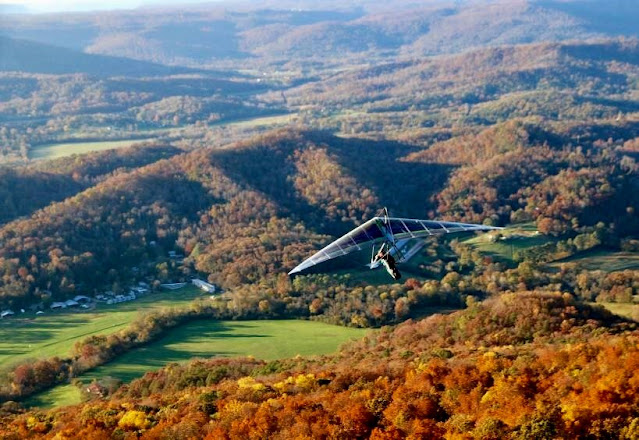 Thanksgiving is coming up.  I wish you all a festive Thanksgiving with your family and/or friends, or just by yourself.  Stay safe. 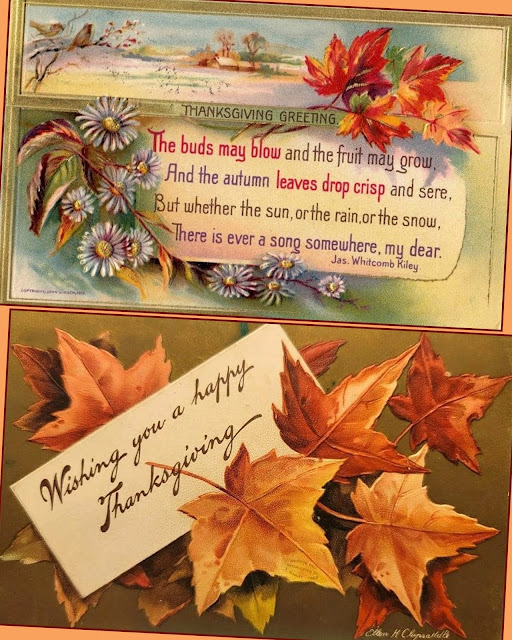 Huge thanks for the solace and heart balm which fills this post.
I am pretty certain that DJan would have LOVED to soar through those skies.

A great post from every perspective, and yes I believe that nature is a calming influence in your life, even if only pictures, but enjoyment of the outdoors is even more meaningful. I could not imagine living without it.

Cloudland Canyon is very special! I do believe that nature is very healing to us all and even photos are helpful.
We stayed at a cabin to celebrate my Dad's birthday in 2007, I think it was, it was in April. Spring is gorgeous there too! I got up early and quietly tiptoed outside so as not to wake anyone. I walked to the canyon's edge and was rewarded with the most beautiful sunrise. A fawn may be a thing of beauty rising from its resting place but a rising sun at Cloudland Canyon has to be right up there with it. xx

I'm enjoying your wonderful nature photos. I checked the park site, and it's only 5 hours from me. The trails look wonderful! I'm bookmarking their site for a future where Covid allows for this. Thanks!

I tried hang gliding years ago and found that I much prefer being farther away from the ground, as in skydiving. Gorgeous photos, VB, and I especially love the magical waterfall! Thanks for mentioning me, as it's now been more than five years since I made a skydive (and sometimes I miss it). :-)

Wow, beautiful scenery!
I once thought if I learn to sky dive, it would cure my anxiety. I still laugh about it, on the ground.

Remembering the injustices done to the Native Americans is appropriate for Thanksgiving week. Thank you for researching this bit of history, and keeping us aware.

Your photos are beautiful. We really don't need research to know how it's calming to look at them, but it's still interesting to learn about it.

be well... mae at maefood.blogspot.com

I certainly find nature calming I must say and you have a wonderful set of photos here.

I have just been reading a book that has discussed The Trail of Tears, and they do not like what happens in Africa !!!! The boot is on the other foot!!

This is truly lovely. I think it must be true about looking at photos of nature and having them relieve stress. Seeing photos like this are a mini-vacation and it certainly is beautiful. When we can't get out and away, it's so nice to "be" somewhere lovely.

Hi Vagabonde, Beautiful photos of a beautiful park that is now on my travel agenda when we feel safe to hit the road again. It looks like its only about 3 hours from our home! That crazy road is just what we like to explore too. Thanksgiving will be rough on many of us this year but we all should be thankful for what we do have. Still, for us its been a years since we've seen our grandsons. Can't wait for the vaccine. Probably will be able to travel again by next summer. Stay Safe and Take Care, Big Daddy Dave

Hello, Vagabonde,
I liked your post. I'd love to spend some time in a yurt, canyon is so beautiful.
I sincerely wish you happy Thanksgiving day, perhaps you will be with your family and grandchildren.
You're right viewing nature photos improves your mood and makes life fun.

I must say that when you take a country drive it's the real thing - la vie sauvage. It evokes the second half of the journey when we go on our annual holiday in southern France.

First half: Hereford (near the Welsh border) to Folkestone (on the Channel coast); Channel Tunnel to Calais; set the satnav for Orléans; through the Paris banlieux to the 10 km long Duplex Tunnel (very expensive toll) under the south-west of Paris; overnight at Chevilly, village to the north of Orléans.

Second half: Zoom off due south for hundreds of kilometres, bypass Clermont Ferrand, then climb up and up (1200 m) to Massif Central which is where we encounter countryside that resembles Georgia. Rolling hills which disappear into the distant haze, extinct volcanoes, lots and lots of space which goes on and on. Our rented villa (we've used several) is within 50 km of Béziers.

Will it happen in 2021? Can't say. Meanwhile I trust you are able to forget the passage of time and keep on trucking. Bonne chance!