In 1922 the State of Georgia started a road program to help the economic problems caused by the "Cotton Bust." Highway 41, about 5 miles from of our house, was completed in the late 40s and was a major avenue which people used until I-75 was finished. The Smith Motel was built on Highway 41 in the early 1950s to take advantage of the renewed travel in the area. There was a restaurant in the front of the motel, which, by the time we moved to Cobb County , had become a popular Mexican restaurant where we often ate. Here is a postcard showing the Smith Motel when it was first built by Mr. Buick Smith. 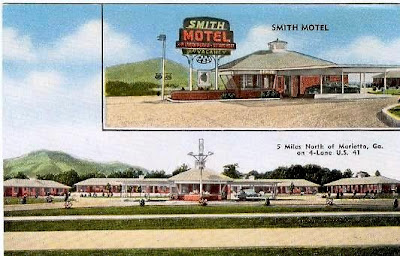 After the I- 75 freeway was finished the interstate trucks and cars switched and rarely used Highway 41 anymore. Slowly the motel started to decline due to lack of business. We drove by the motel a few weeks ago and were surprised to see that the motel had totally disappeared and, instead, there was a vast open area. Even new construction had stopped, apparently because of the economic downturn. I hope that the economy will pick up, but in the meantime it is nice to have an uninterrupted panoramic view of Kennesaw Mountain. 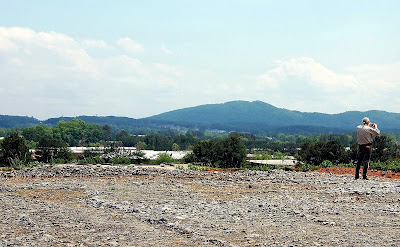 I did some research and found out that the City of Kennesaw had decided that the acreage occupied by the Smith Motel should be “redeveloped” into at least 250,000 square feet of retail businesses, even though a couple of miles away there is a shopping center with department stores and chain stores. They declared that the motel site should be razed because the area was “blighted” (read: without another strip mall.) But I am sure that there are enough visionary and creative architects out there who could have designed a beautiful area comprising green condos, a park and several little stores while retaining part of the vintage motel. 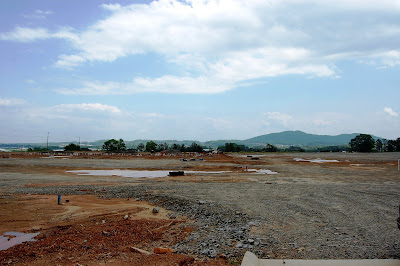 I find it interesting that in this country many buildings and houses are destroyed rather than being restored or preserved. It is a very different mindset from other countries. How many American tourists would like to visit quaint little towns in Germany or Italy if their mayors had the same attitude as the Kennesaw’s mayor? Would they fly over the ocean to look at another strip mall? I saw a blog by an American woman who just moved to France and she thought that the reason there were so many open spaces in the country side was because World War I had killed too many men - many men were killed, but this is a result of strong building regulations and historic preservation.

Here is a picture of buildings in Lucca , Italy, that were allowed to grow old. I took this picture a few years ago, but I bet if you go there this summer, they will still be there not a strip mall. Thinking about this, I looked on the Internet and found Mr. Rypkema’s Heritage Strategies Blog which has many good posts concerning historic preservation. For example he says that “Now France has as big a case of economic chaos as we do. Their economy shrunk last year the most since World War II and their unemployment is expected to reach nearly 11%. So, of course, President Sarkozy had to introduce his own economic stimulus plan. But here's a big piece of his approach - committing 100 million extra Euros per year ($130 million) for the restoration of historic monuments in France for the next 4 years. So about 1.5% of his stimulus package is going toward heritage conservation.” You can read his interesting posts by clicking here . 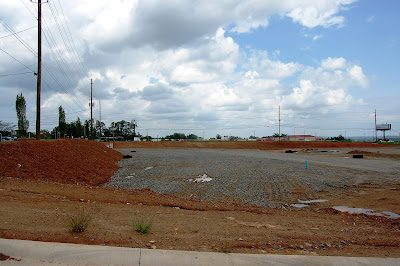 In conclusion I’ll quote from Mr. Rypkema's Heritage Strategies Blog again, who is talking about another building as an example but makes the point much better than I could: “We all diligently recycle our aluminum cans because we’re told it’s good for the environment. Here is a typical North America commercial building – 25 feet wide and 120 feet deep. Let’s say that today we tear down one small building like this. We have now wiped out the entire environmental benefit from the last 1,344,000 aluminum cans that were recycled. We’ve not only wasted an historic building, we’ve wasted months of diligent recycling. And that calculation only considers the impact on the landfill, not any of the other sustainable development calculations like embodied energy.” 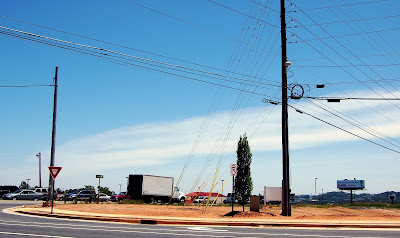 As long as we elect officials who are primarily interested in short term profits resulting in much suburban sprawl, many of our buildings won't be rehabilitated and revitalized. They won't have a chance at getting "old" and be part of some heritage conservation program of future generations.
at 8:00 AM

It takes someone from another culture to point out how shallow the American view of history has been, and still is. Strip malls are a blight on the landscape, but it seems to be what people want, so the builders tear down our history and think nothing of it.

I hope you are doing well, vagabonde, and someone commented on a trip. Did you take one and mention it here and I missed it?

What a wonderfully well researched post. I have always felt that we Americans are so short sighted. We think new is better.

In Europe they have magnificent buildings that are hundreds of years old. Some are even thousands of years old (Think the Pantheon in Rome) and are still standing and useful.

We are a wasteful society.

im glad someone took the time to do a blog on the Smith Motel.I stayed there in the spring and summer of 1986 and frequently ate at the resturant there.I
lived in the motel untill july 2nd of 86
when i went to Memphis (Beal st) to
the Blue Sued shoe saloon,to work and
record my music and singing. I have
fond memories of being in my room
writting and singing my music.I love
that shabby Motel.It had a lot of
History.I saw the picture of what it
looked like when first built.Looks like
when I was there the Gazebo was allready gone.I still remember the
layout of the room.and i still have my
room key with the red oval plastic key
chain with room number on it.Its a shame they demolished it.It was a true land mark..

This was nice, I enjoy taking the older tourist routes now that I am in my early 60s and having grown up in Atlanta, I vividly remember the Smith Motel. Our family would go up to Red Top Mountain several times per year and I-75 was only complete to Marietta and we would drive by the Smith Motel on US 41. They had cool billboards on the highway that showed a picture of a sleeping dog and it would say "Collapse at the Smith Motel." Needless to say, it was tailored to the Midwest to Florida travelers on 41. When you drive up 41 now, you see not a lot remaining from the heyday of the tourist business.

My mom worked at Smith Mote when I was about 6. I remember going there to swim and hang out with her while she worked. For whatever reason, those are some of my fondest memories. We’d get Chinese from Golden House (how I remember that name is a miracle). I was very saddened to hear today that it’s all gone.