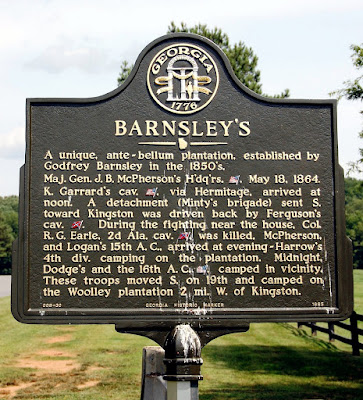 This past June 17th was our anniversary, not to be confused with another June 17th anniversary – the Battle of Bunker Hill, the Revolutionary battle fought on June 17, 1775. We celebrated our 42nd wedding anniversary by going to lunch at the Woodland ’s Grill, located within the Barnsley Gardens Resort. The restaurant is advertised as being “enhanced by the ambiance of an English hunting lodge and sweeping views of the golf course and surrounding hills”. We do not play golf but we were interested in seeing the heirloom gardens situated on 1400 acres of the 2500 acre resort. (Click on pictures to enlarge them.) 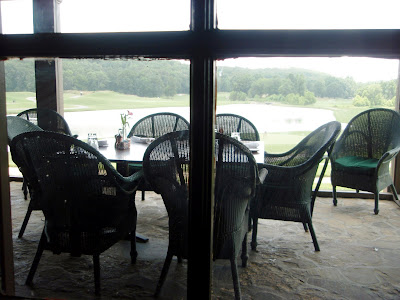 We have driven several times by the road sign to Barnsley Gardens but had never been there. Years ago, I read a book about the history of its owner, a very sad story. This estate may seem peaceful now but it has a long and tragic history. 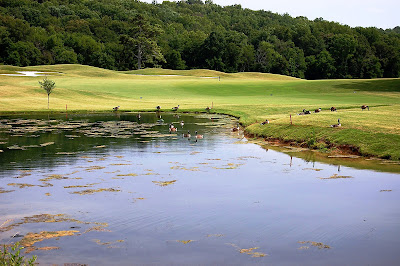 The estate was originally called Woodlands by its owner, Sir Godfrey Barnsley. Godfrey was born in Liverpool, England in 1805, and came to Georgia in 1824 with only 1 shilling in his pocket. By 1830 after working as a clerk for a cotton broker in Savannah he had become very rich as a cotton factor and sea merchant himself. On Christmas Eve 1828 he married Julia Scarborough, the love of his life, and decided he would build an Italianate mansion for her.

Below is a picture of Godfrey and Julia Barnsley from a photograph in the museum (sorry no tripod, so the pictures are slightly out of focus). 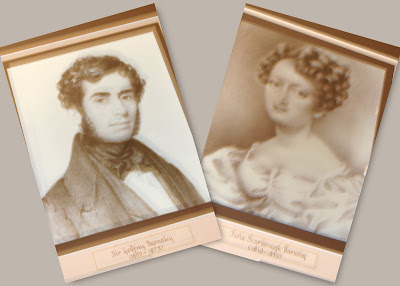 By 1842 Godfrey was able to obtain almost 4000 acres of former Cherokee land in the north Georgia foothills (in 1838 the US Government had stripped the Cherokee Nation of their land in northwest Georgia and moved them west on the infamous Trail of Tears.) Godfrey and Julia started the construction of the mansion and, since both were avid botanists and gardeners, they made plans for beautiful gardens replete with exotic plants and shrubs from all over the world. They employed an old Cherokee Indian who, when he saw that some of the hills were being sheared (land sacred to the Cherokees) placed a curse on the Barnsleys. Then he disappeared.

Below is a picture of the manor house taken in 1890 from a photograph in the museum and two pictures of the ruins now. 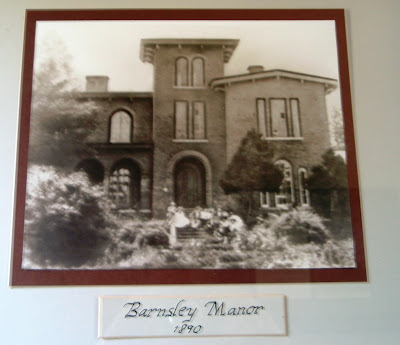 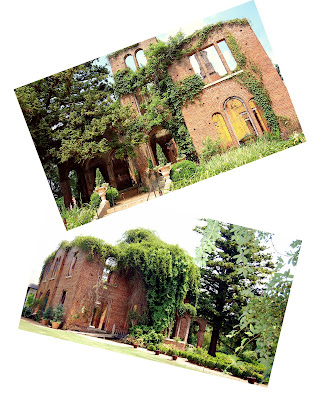 Julia was never to see her beloved manor house and gardens as shortly after her infant died, in 1845, she died of tuberculosis, still in her mid-thirties. She left Godfrey with 6 children. It is said that one day, while Godfrey was close to the fountain in the formal gardens Julia’s spirit appeared to him and asked him to finish the construction of the estate. 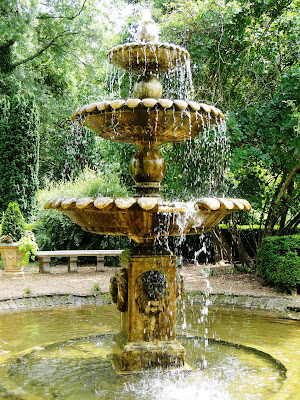 Godfrey worked very hard at his cotton and shipping business to finish Woodlands but the Civil War interrupted his plans. One day a Confederate friend of his, Colonel Robert G. Earle, who was part of the Second Alabama Light Calvary, rode to warn him that the northern soldiers were approaching. The Colonel was shot by them while almost in view of the estate (his body was buried in Woodlands.) 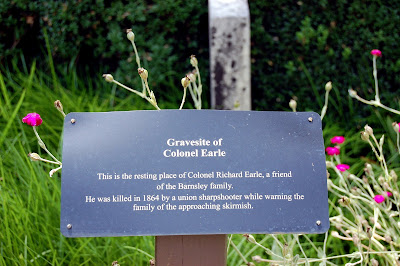 Woodlands was in the path of Sherman ’s army and sustained much destruction by the occupying troops. Godfrey’s business suffered because of the Civil War and he died in New Orleans in 1873. His body was brought back to Woodlands, where he is buried. 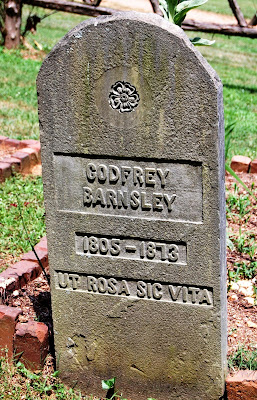 A grand daughter of Julia and Godfrey, Addie Saylor, was a friend of Margaret Mitchell. She related to Margaret the hardships of her mother, also named Julia, during the Civil War. Margaret Mitchell used many parallels between Julia and Scarlet in her story, Gone with the Wind. Many other tragic events happened to this family and estate and I found a couple of tourism sites relating them should you be interested in reading more on the Barnsleys’ story. Click on the articles here and here to learn more. 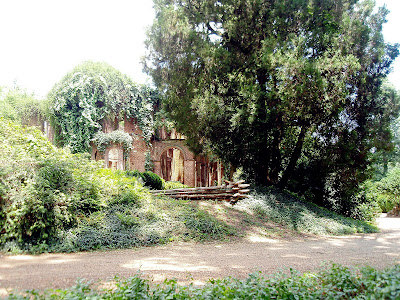 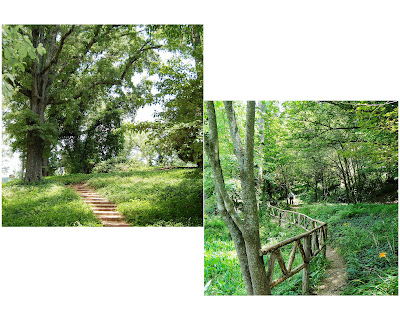 Barnsley ’s descendants lived in the manor house until a 1906 tornado destroyed its roof and they moved into the kitchen wing. In 1942 the property was sold at auction and fell into disrepair and oblivion. 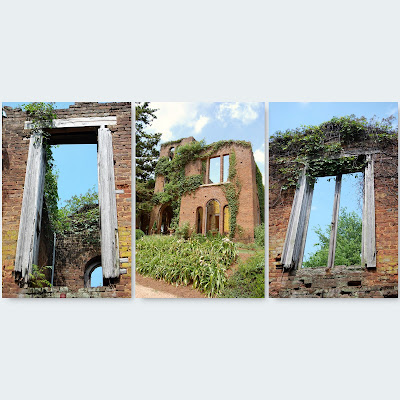 In 1988, Prince Hubertus Fugger Babenhausen of Augsberg , Germany and his wife, Princess Alexandra of Bavaria , bought what remained of the estate – a neglected garden and a gutted brick structure. First, the Prince had two Cherokee Chiefs come to Woodlands and remove the curse from the land, then work was done until 1991 to revive the formal gardens and restore the ruins of the Manor House. 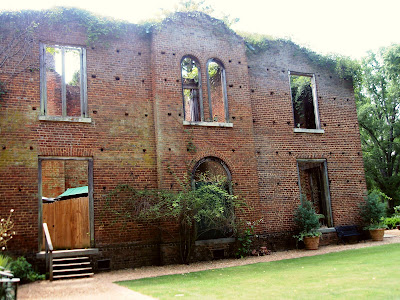 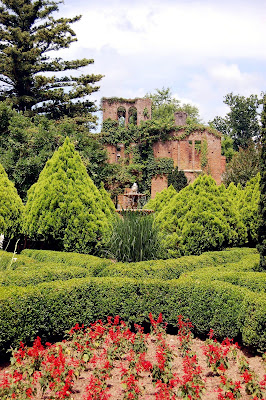 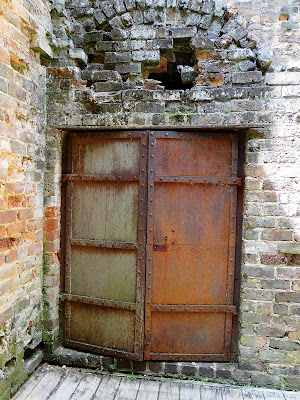 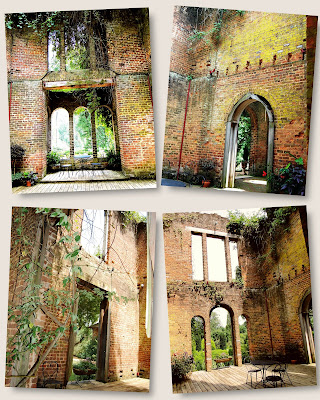 The original right wing, where the kitchen was located, was made into a museum to house many personal items and memorabilia from 4 generations of the Barnsleys. It has odd and interesting items – for example: a fiddle that was taken by an Union soldier during the Civil War and returned to the Manor House six generations later; an 1800s Ladies’ exercise cycle; a stove built in 1847 on Godfrey’s design which was seen in 1929 by auto maker Henry Ford who wanted to purchase it; the original washing machine purchased by Sir Godfrey in 1857; an early "vaporizer"; a copy of a best seller from the 1860’s “St Elmo” whose author, Augusta Evans Wilson had started her novel at Woodlands and used the estate as the setting for her novel, and many other photographs. 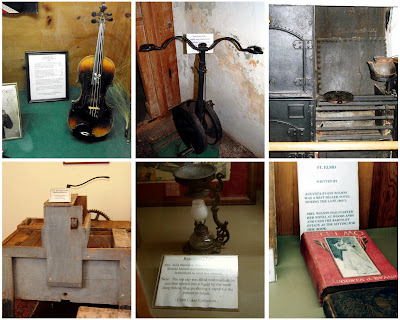 Barnsley Gardens Resort opened in 1991 to the public. The resort includes 33 guest cottages along a 19th century pedestrian village, two restaurants, an 18-hole championship golf course, a full-service spa, horseback riding, swimming pool, etc., all nestled on this beautiful and historic Georgia land in the foothills of the Appalachian Mountains. 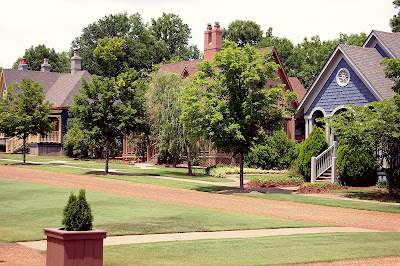 One of the restaurants, the Rice House, is a former 1854 farmhouse, which was moved to the gardens (bullet holes from the “War between the States” still scar its front door and exterior walls.) 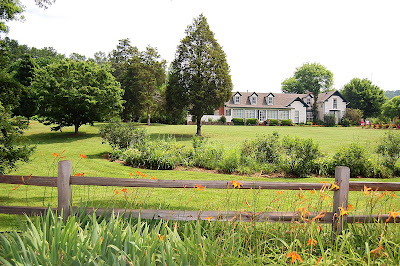 We wandered around many acres and hardly saw anybody – but it was 98 degrees in the shade (approx. 37 degrees Centigrade) so more prudent people were indoors. I did not take many flower pictures because spring flowers were fading and summer flowers were still only in buds. (Don't forget to click on the photos to enlarge them.) 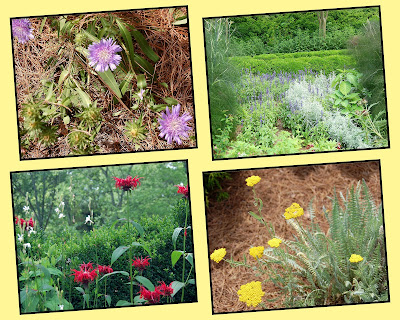 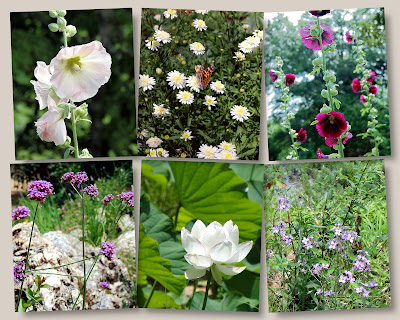 The lotus garden was waiting for its blooms to open in July. 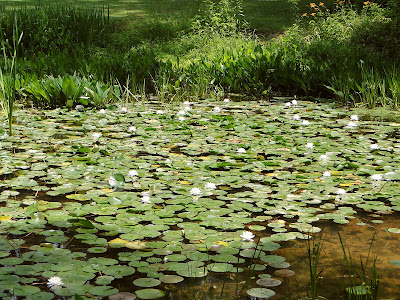 There have been many reports of seeing ghosts of the Barnsley family. While sitting in the 160 years old enchanting gardens, near the romantic ruins of the Italianate villa, and sipping on your mint julep, you can stare into the mist of the estate lake at sundown and may even see the ghosts of Julia and Godfrey Barnsley, together in peace. 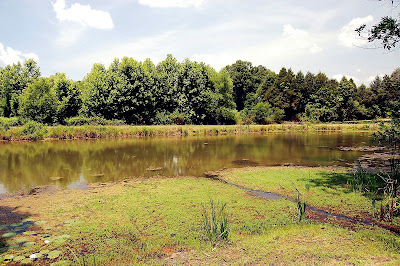 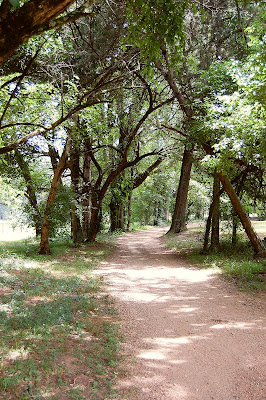 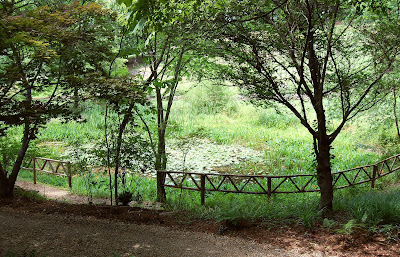 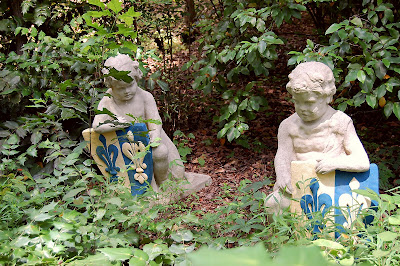 (sigh) Absolutely wonderful, thank you! This was a fair amount of work to put together, and it was worth it. Lots of pictures to take and download, too. A lovely chronicle and well worth the work you devoted to it!

PS: I meant to ask, are all these pictures yours, i.e., taken by you? If so, you do have an exceptionally fine eye.

I am so happy I found your blog. I get to travel from my computer chair and see wonderful places.

I love the fact that you tell the history of the places and, in so doing, you make it come alive.

Barnsley is a beautiful place with a tragic, but romantic, story. Thanks for your research and good photography.

Thanks for the comments on my blog. I just had to tell you while browsing blogs, I saw a picture that I THOUGHT was the front of your head! (It wasn't) And then I wondered, is that a new picture of the back of your head? I don't remember your hand being in there before. You also need to tell me what camera you most prefer, as I am looking to get a new one.

Lovely post! Your photos and commentary are very well done. I enjoyed reading about Barnsley's history. Whenever we get the chance we will visit old houses or estates. One thing that seems to pop up often in the stories of these old places is that the people who build them end up not living in them for very long, usually because of some tragic event in their lives. It is somehow very sad to look at the beautiful places they created and know that they never got to enjoy them.

Thank you for an absolutely wonderful tour of this beautiful place and the heart breaking family history. Your photos are wonderful and the detail both photographic and written is enlightening. Thank you for sharing.
Smiles

Most interesting! And sad....

I recently posted a clay figurine inscribed with curses, and now here you say chiefs had to come to remove the curse from the place. Wow, maybe there is something to it after all.