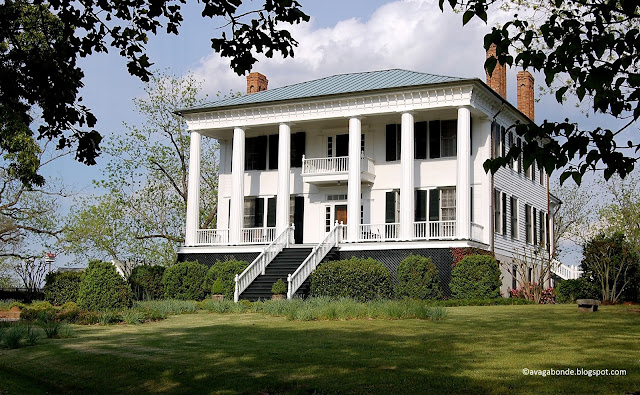 Shoulderbone Plantation was built in the classic antebellum style. The word “antebellum” comes from the Latin ante meaning “before” and bellum meaning “war”. In the United States it means “Pre-Civil War” for the North and “Pre-War Between the States” for the South. Southerners do not like to call this war “Civil”. This type of architecture was introduced after the Louisiana Purchase of 1803 by rich Anglo-Americans who moved to the area and built homes in the Greek revival style, with columns, grand balcony, et al. (Click on the photographs to enlarge them.) 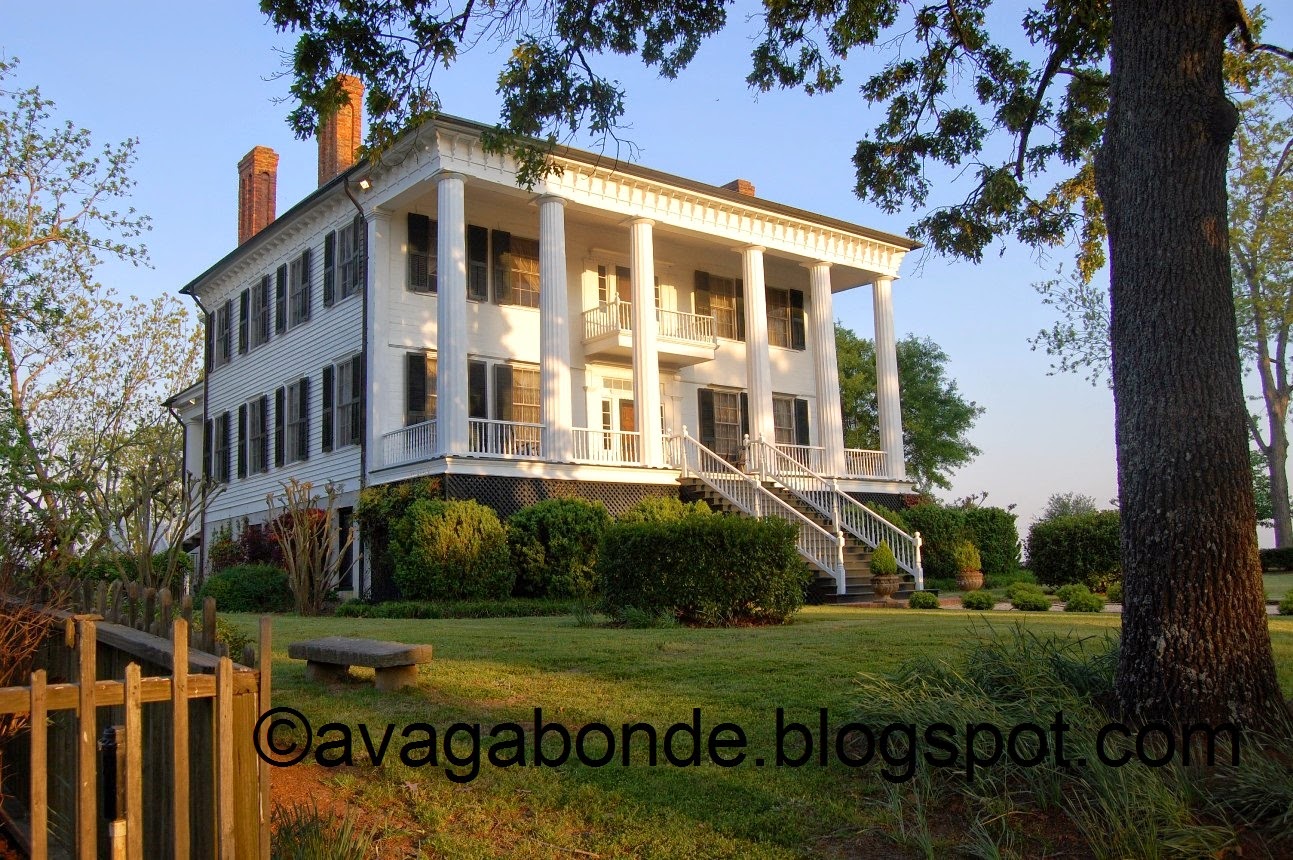 Georgia did not have many stately plantation houses like this before the war, and after General William T. Sherman’s March to the Sea, just a few were left standing. Shoulderbone Plantation is 8 miles west of the little town of Sparta (in middle Georgia ), and escaped destruction somehow. It stands today “frozen in time.” 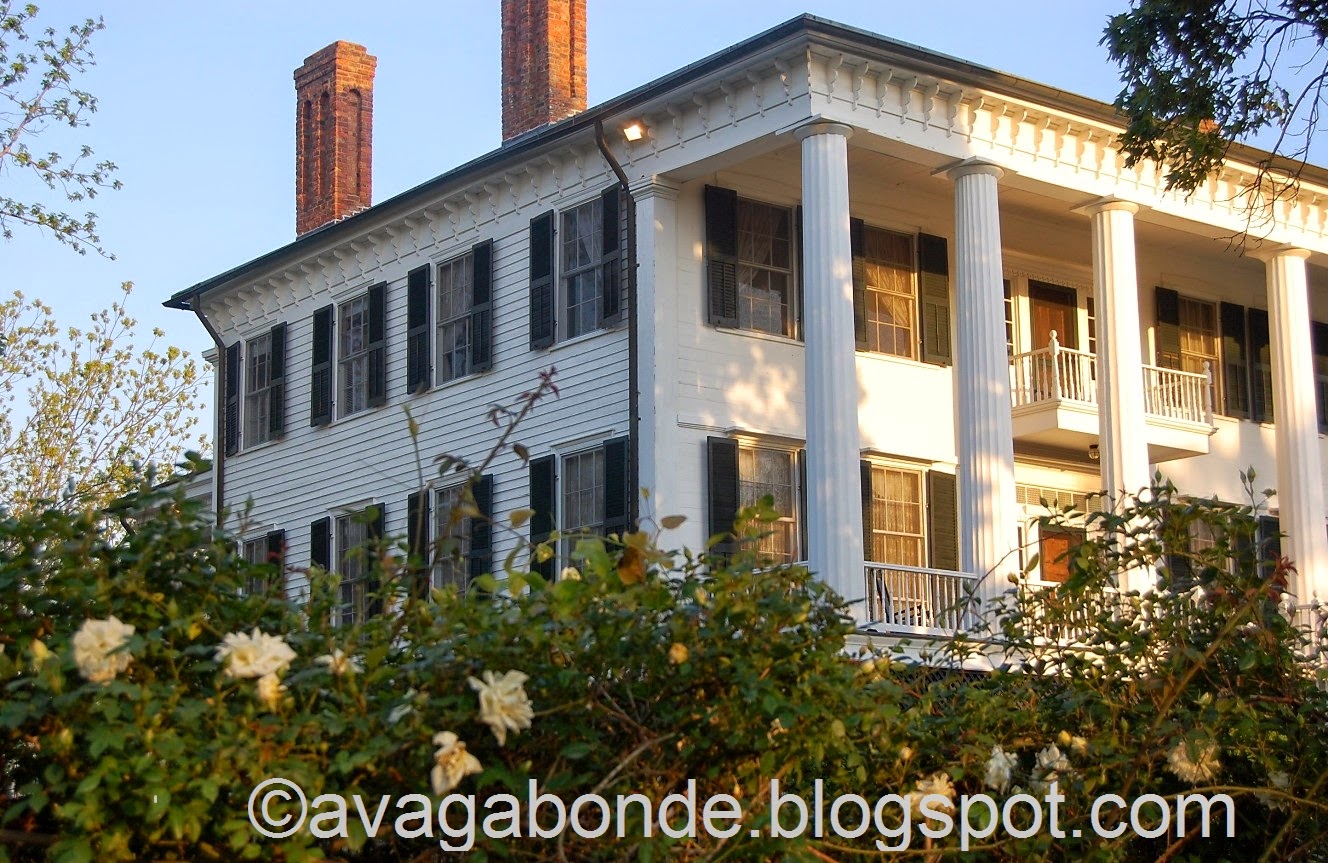 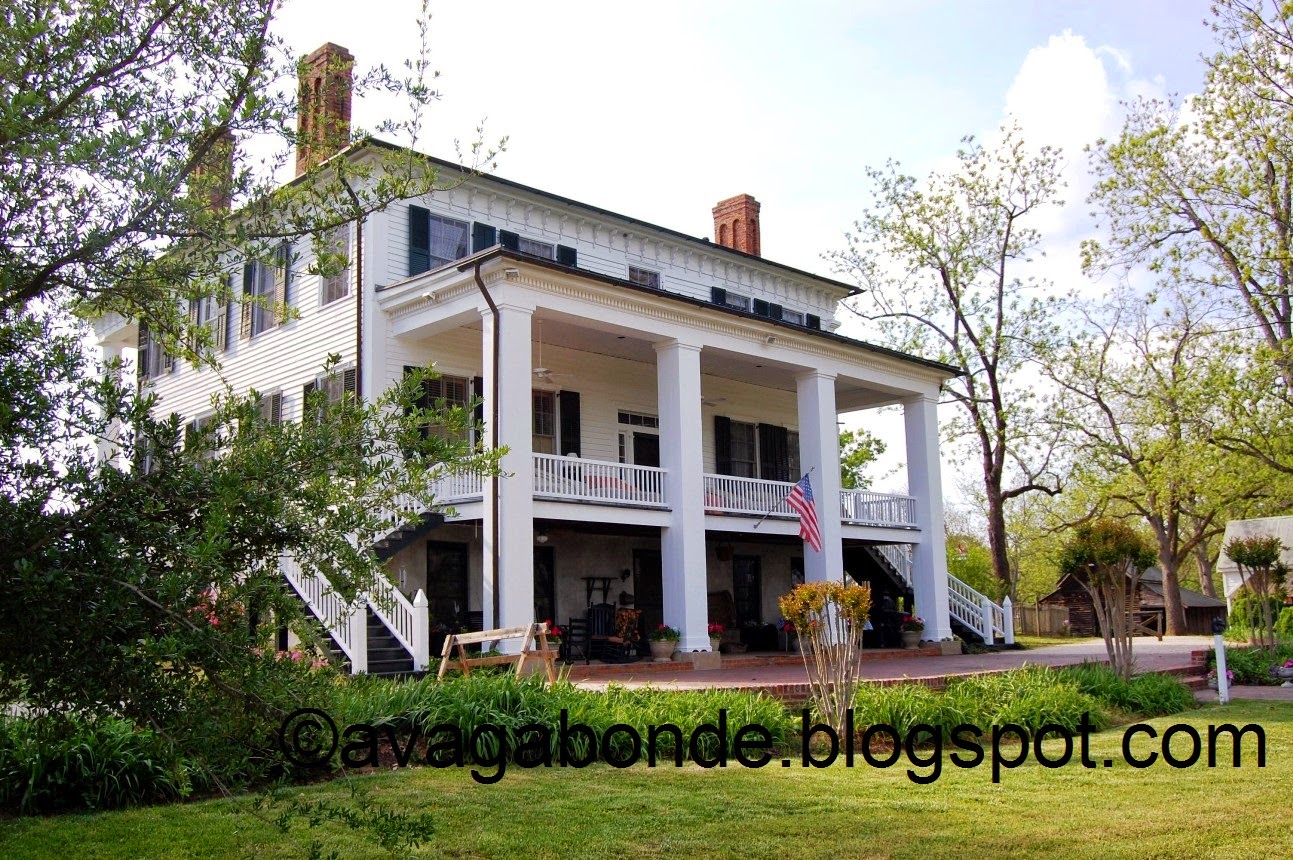 In 1850, Mr. William Jackson had a Greek Revival Plantation house built for his son on 1500 acres of land on the site. This land had been granted to the previous owner, Mr. Knowles, in 1796 who then sold it to Mr. Jackson in 1832. The property was sold again in the early 1900s to Jefferson Lanier, the great grandfather of the present owner, Robert Lanier. 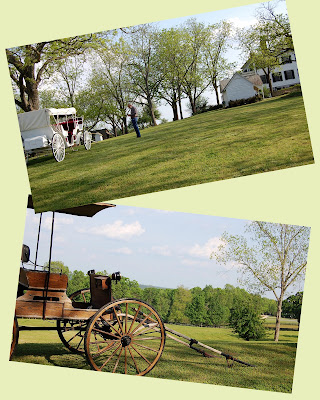 Mr. Robert Lanier had the plantation house restored from 1982 to 1986 to its original character. Workmanship typical of the antebellum period was used, and much effort was taken to utilize original materials. The plantation house was placed on the national Registry of Historic Places in August 1984. 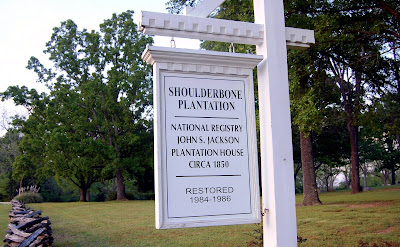 In addition to the plantation house, the property includes two other historical houses, a log cabin, and several original out buildings – all of them sitting now on about 2,325 acres of land. 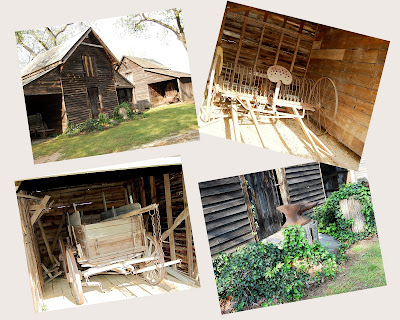 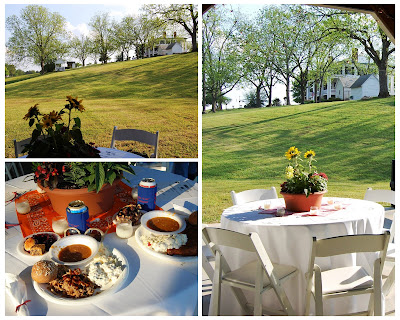 It was a lovely sunny afternoon, and it was a pleasure to walk along the fields covered with wild flowers and observe several handsome horses. 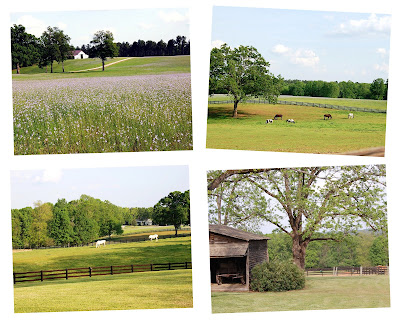 Then the horses came to observe us - 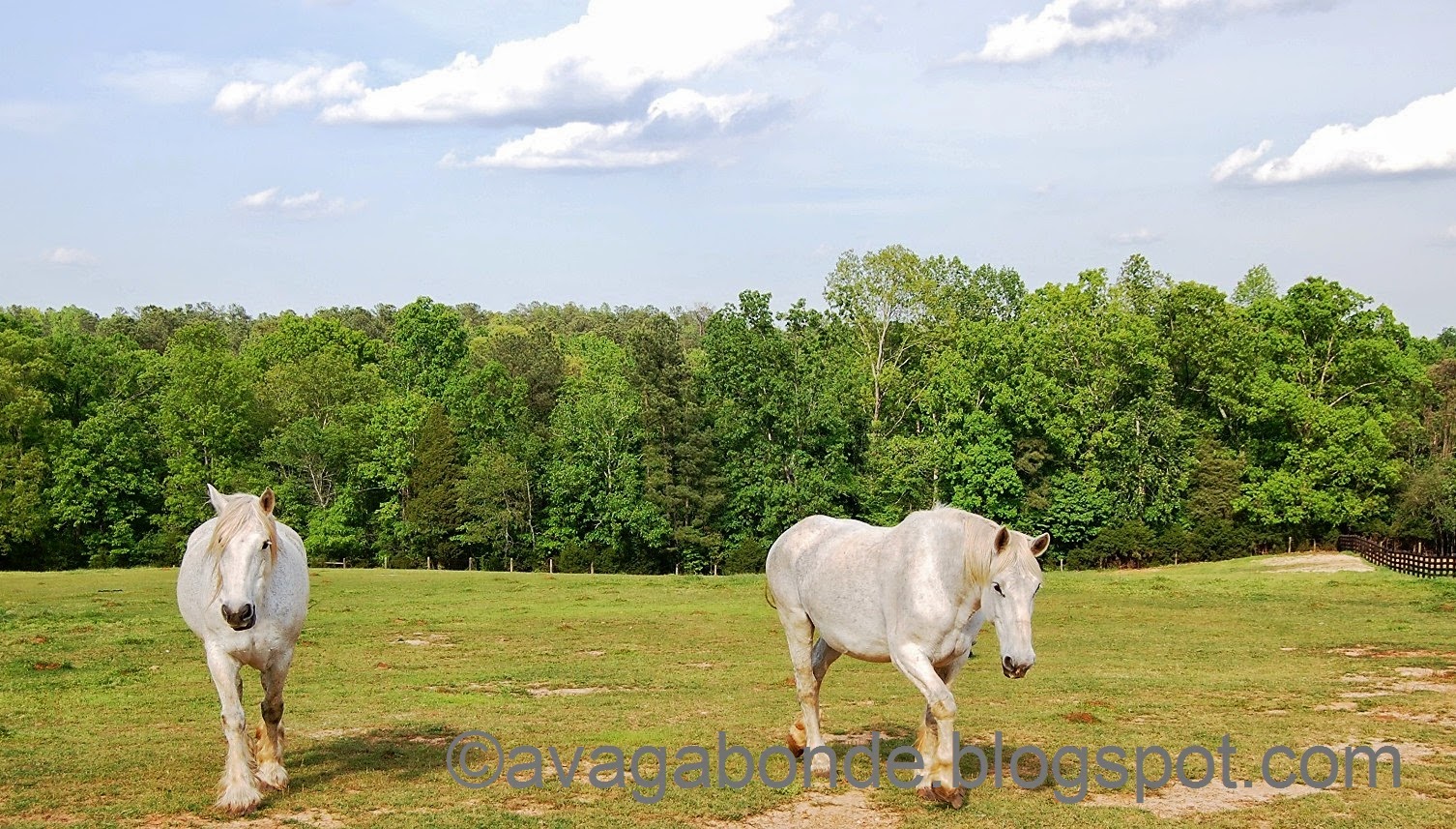 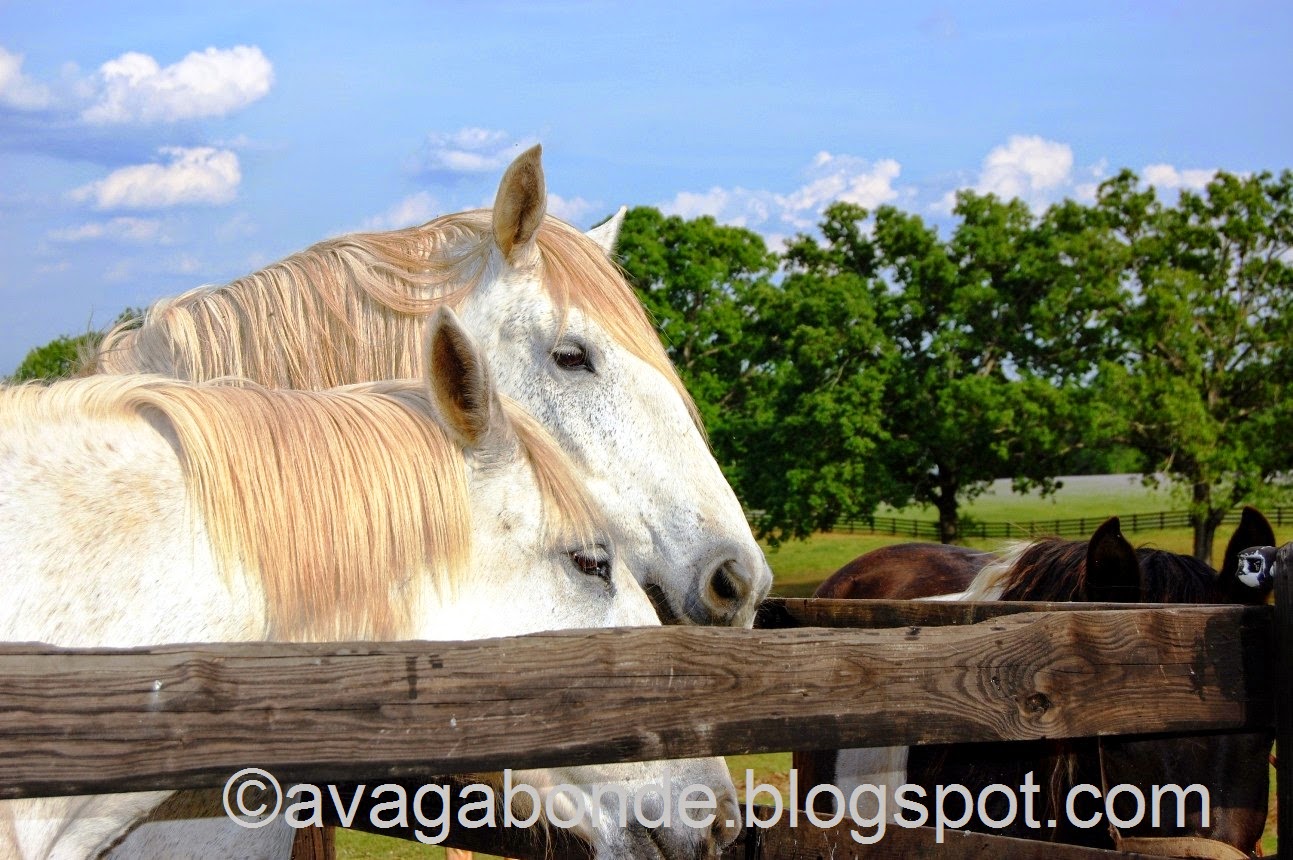 We strolled in the garden and it was like entering a magical place where time had stood still. Looking at a row of carriages, we imagined that we were in the Old South. 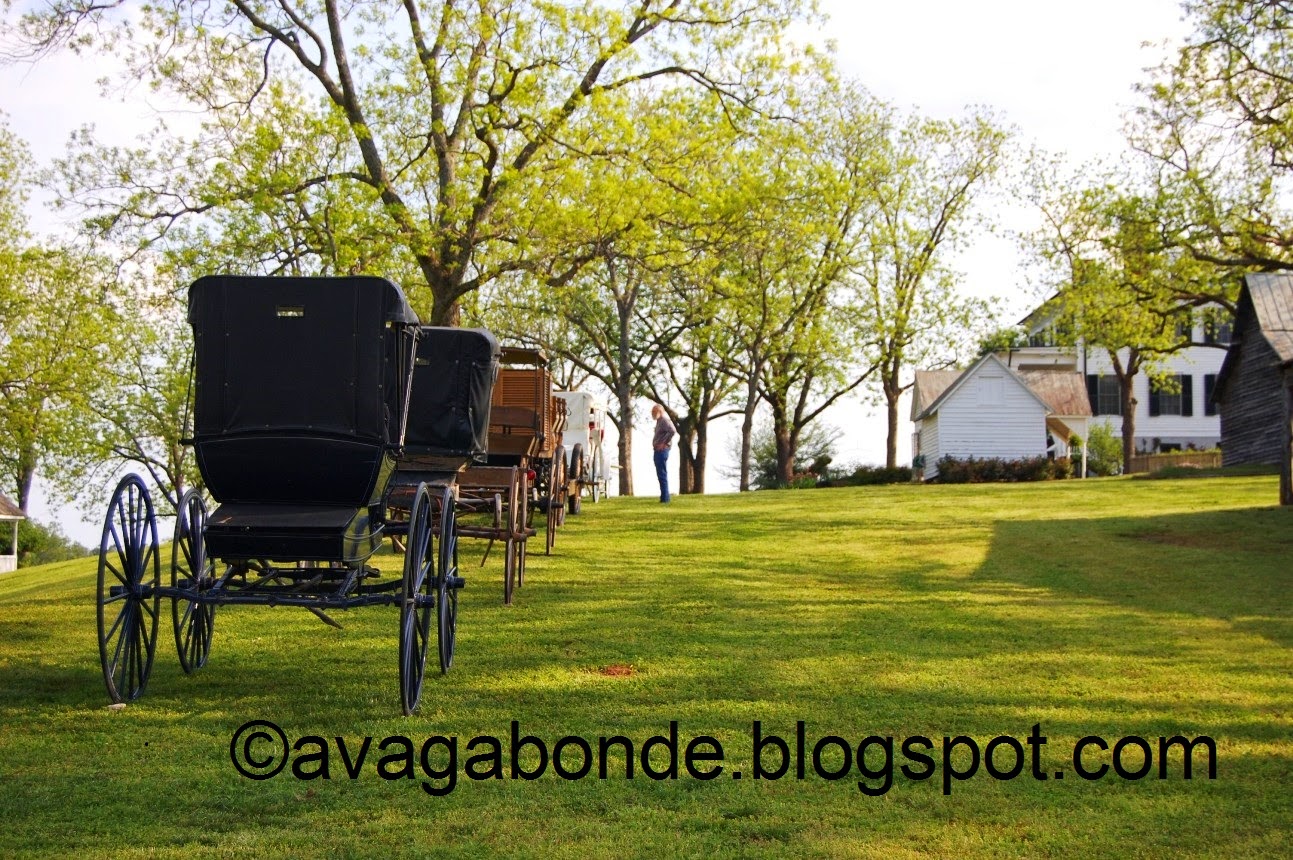 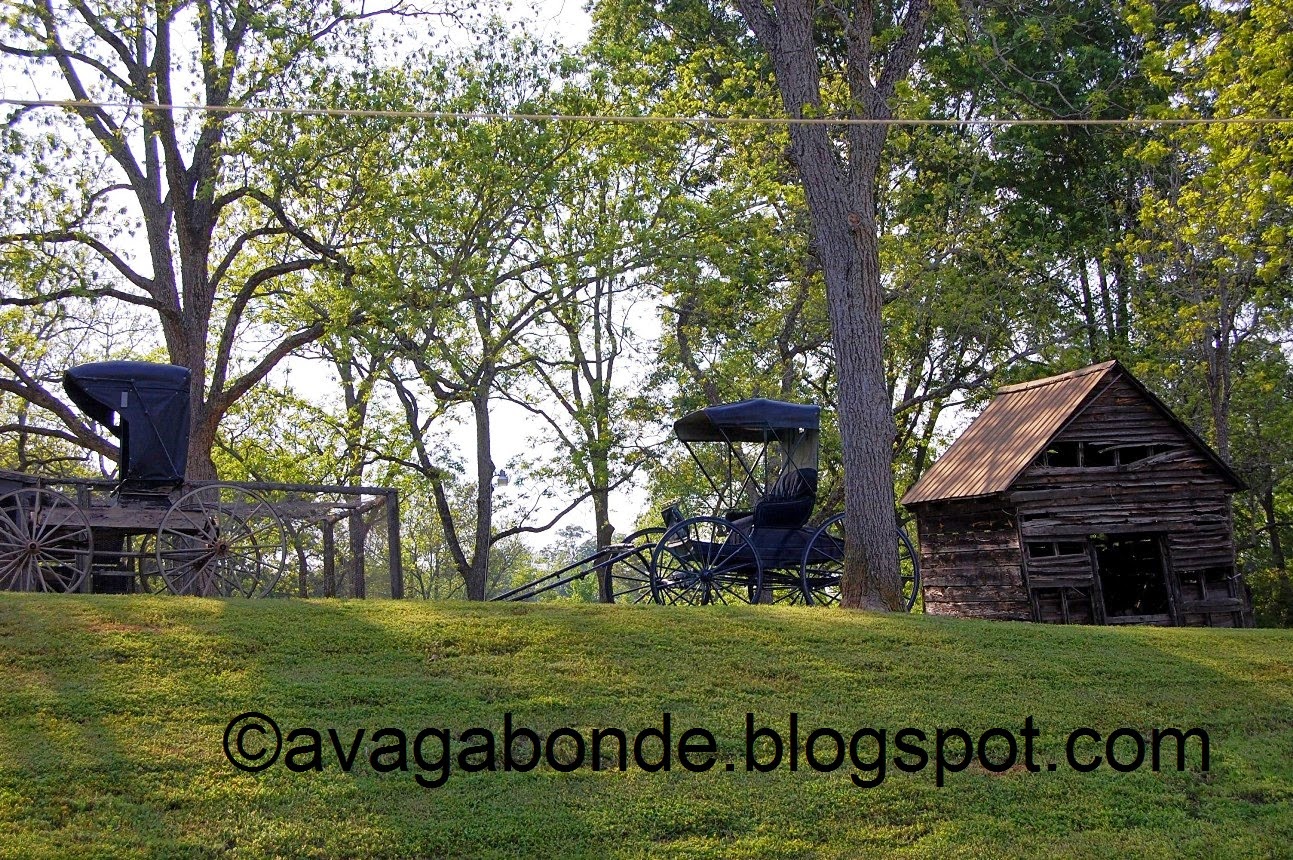 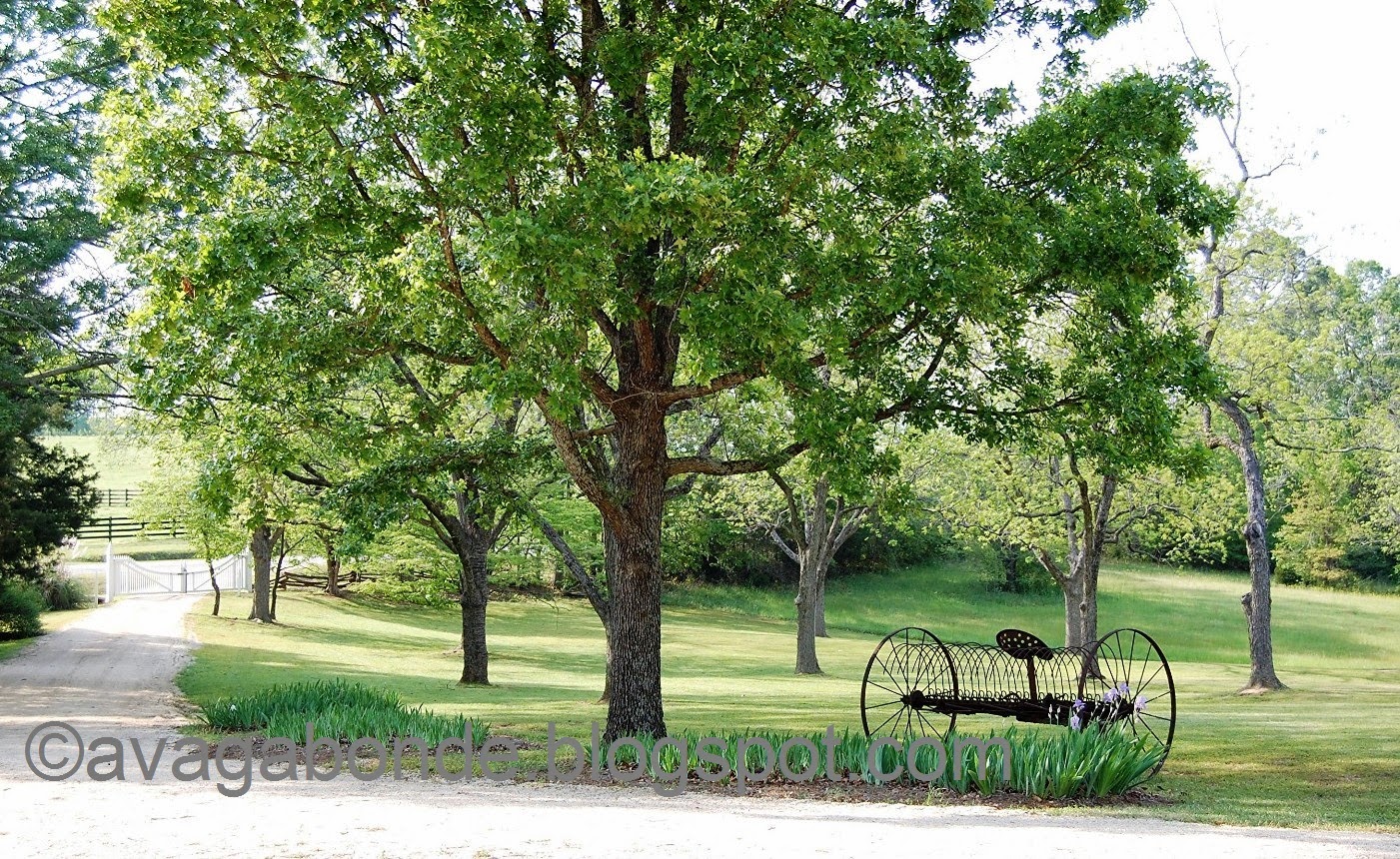 After a hardy meal we drove around the scenic countryside through peaceful meadows. 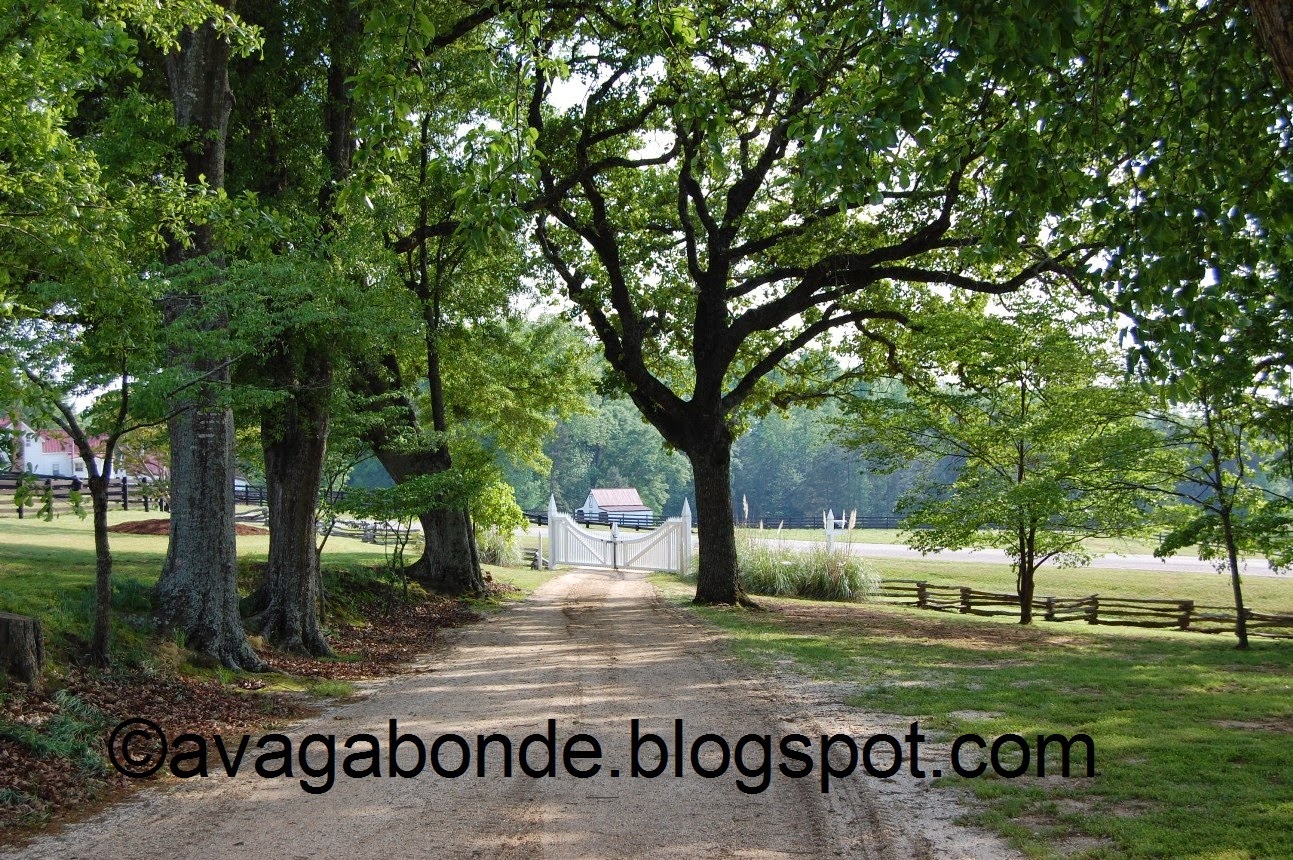 It was as though we had stepped into the past – and we had, because most of these stunning plantation houses are gone now, and as Margaret Mitchell says in her book Gone with the Wind: “Look for it only in books, for it is no more than a dream remembered, a Civilization gone with the wind... “ 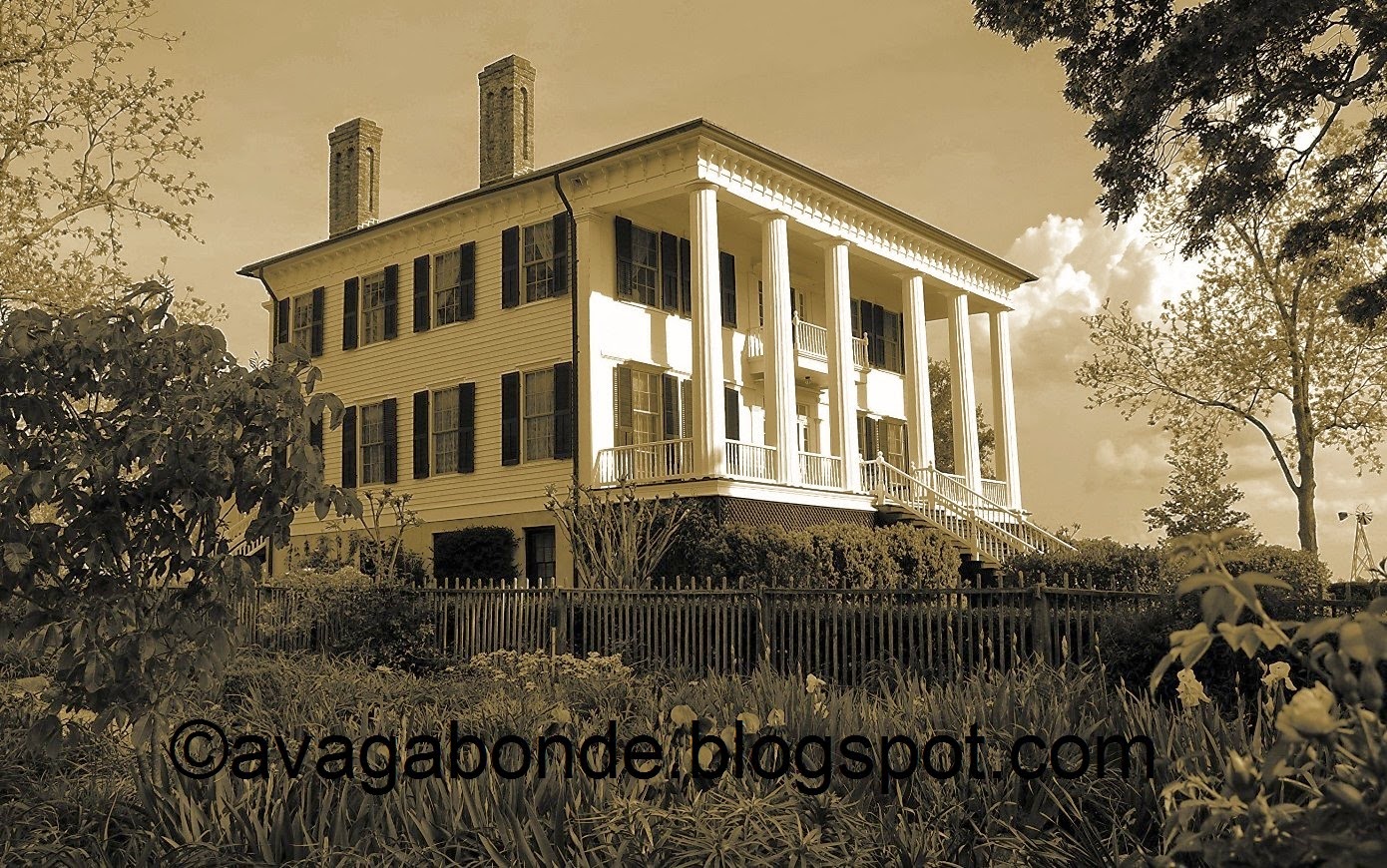 March 1, 2015 - I have not returned to Shoulderbone Plantation.  I did visit other historical homes such as Bulloch Hall, in Roswell, GA, several times, and just last October I visited the Archibald Smith Plantation, also in Roswell.  Click here to see the post.

A couple of years ago I saw that Shoulderbone Plantation was up for sale.  I think it is no longer on the market and guess that it has been purchased, but I am not sure.  I looked at my files and found more photographs that I had not placed on my prior post above, so I am showing some below.  If anyone has more information on Shoulderbone Plantation, please let me know and I'll include the information on this post.  You can contact me via my email address which you can find by clicking on "view my complete profile" on the top right hand side of my blog.

The big house on Shoulderbone Plantation is such an historic and exquisite building that I took many pictures of it.  Here is another one. 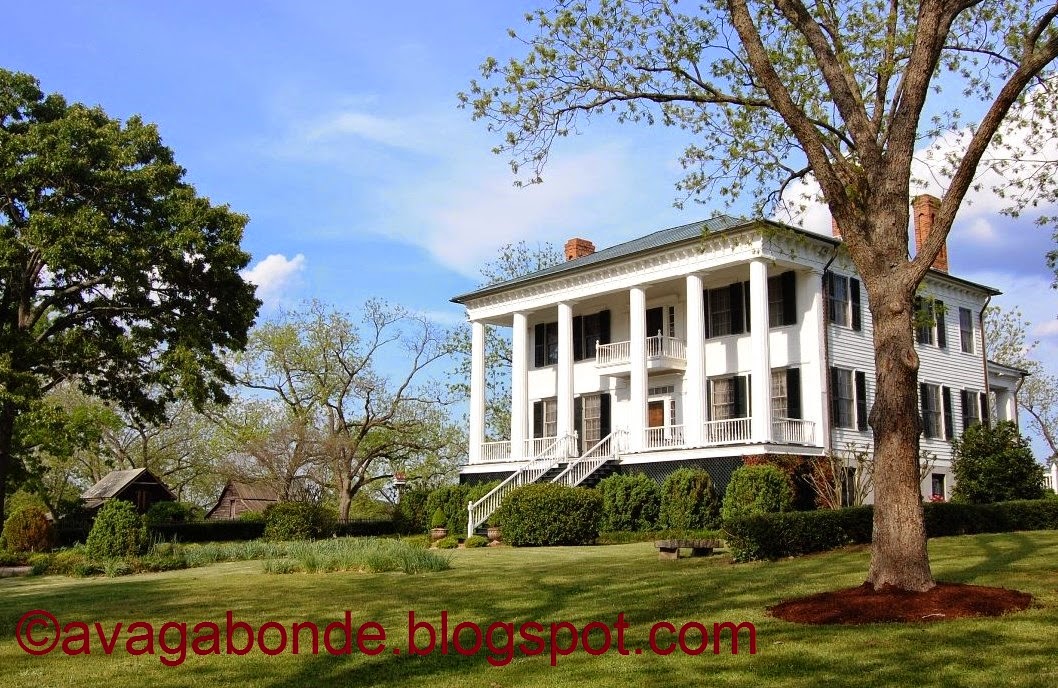 Here are more photos of the interior and exterior. 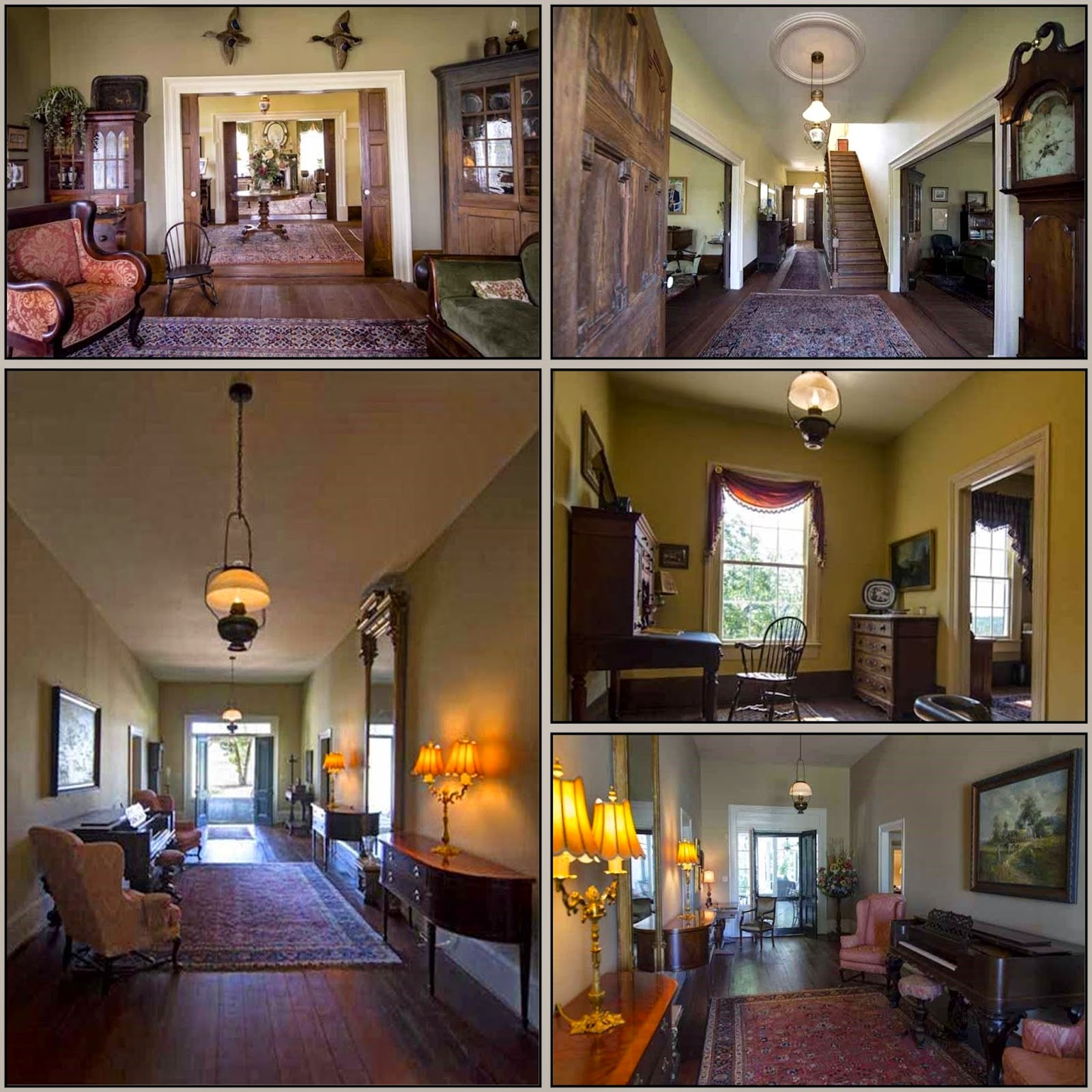 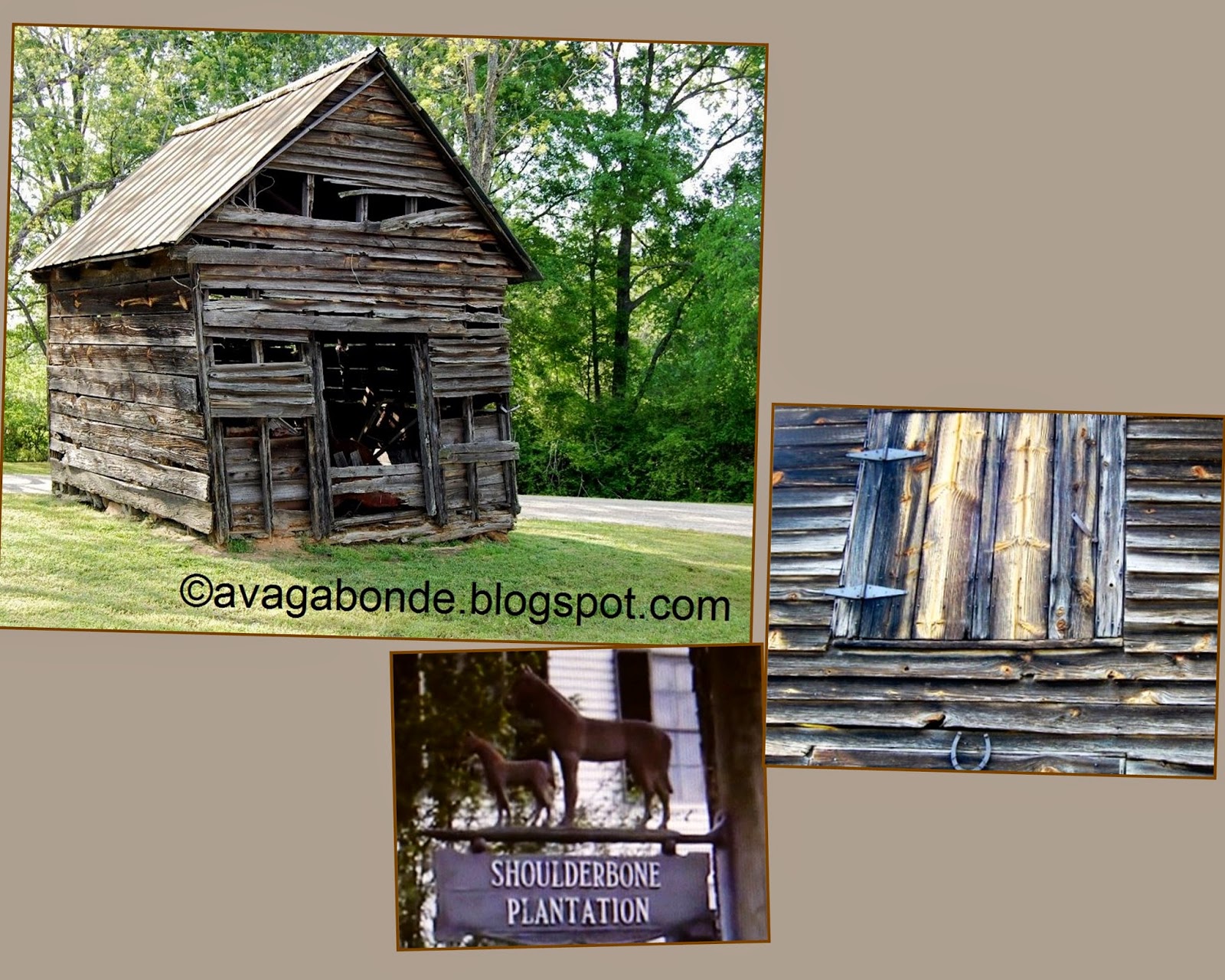 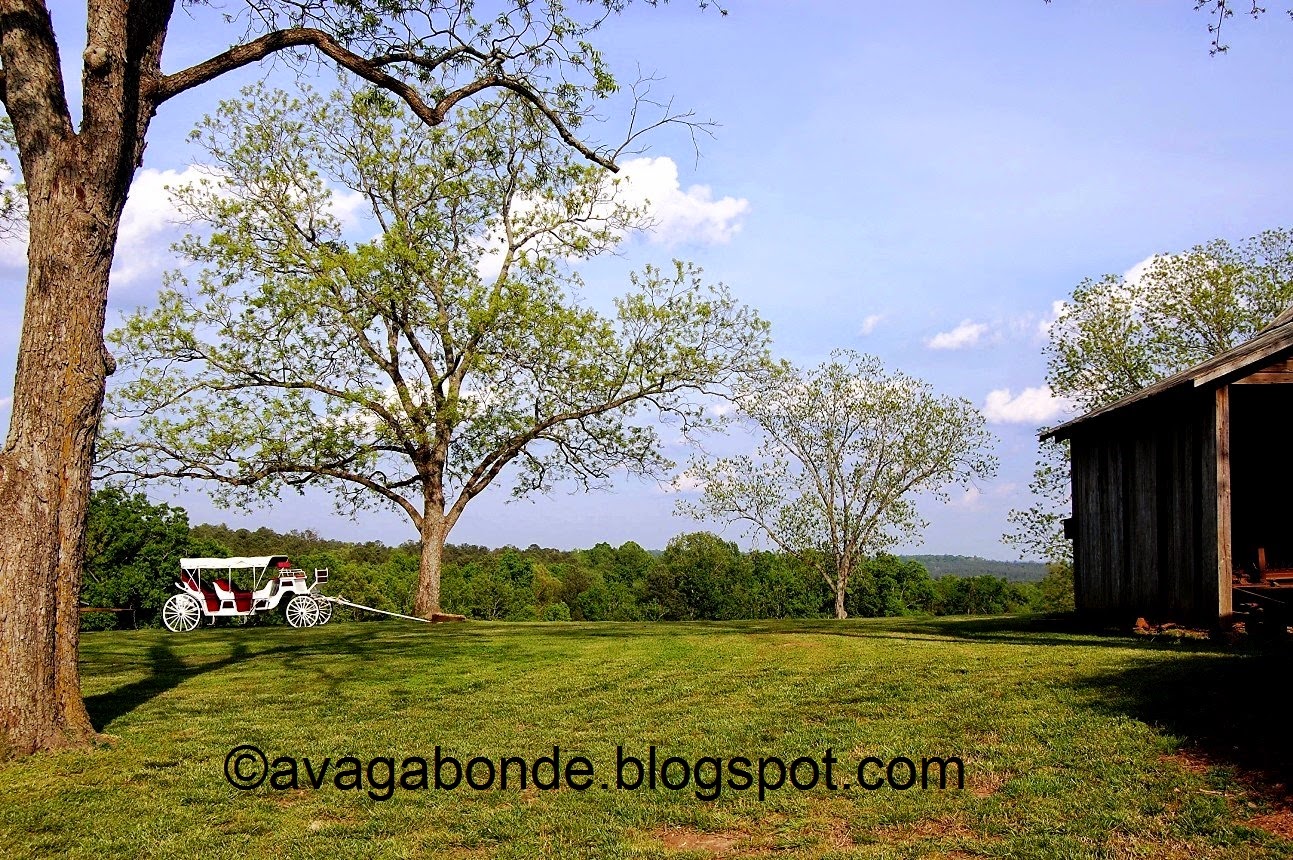 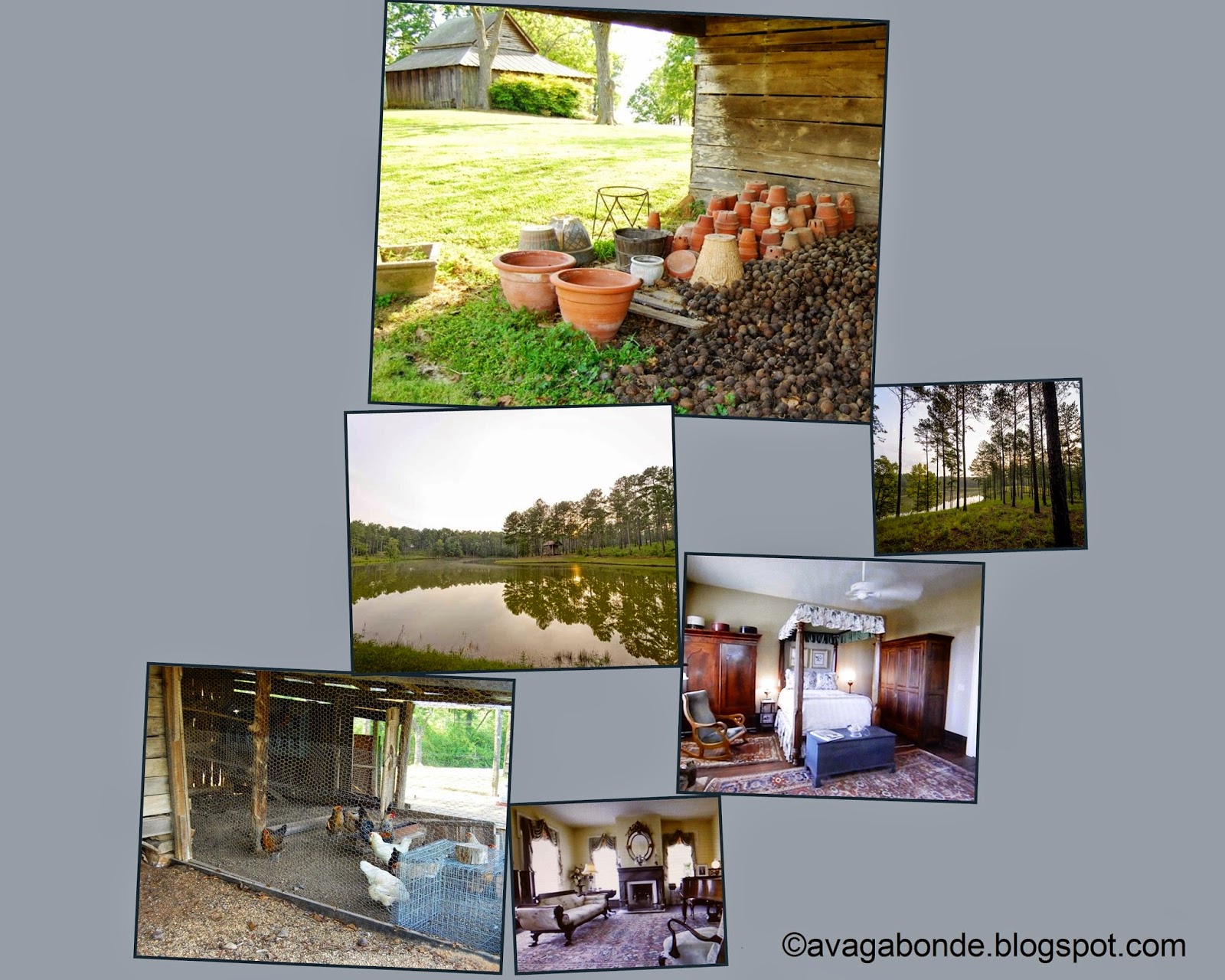 Here is another view from the side, from the flower garden. 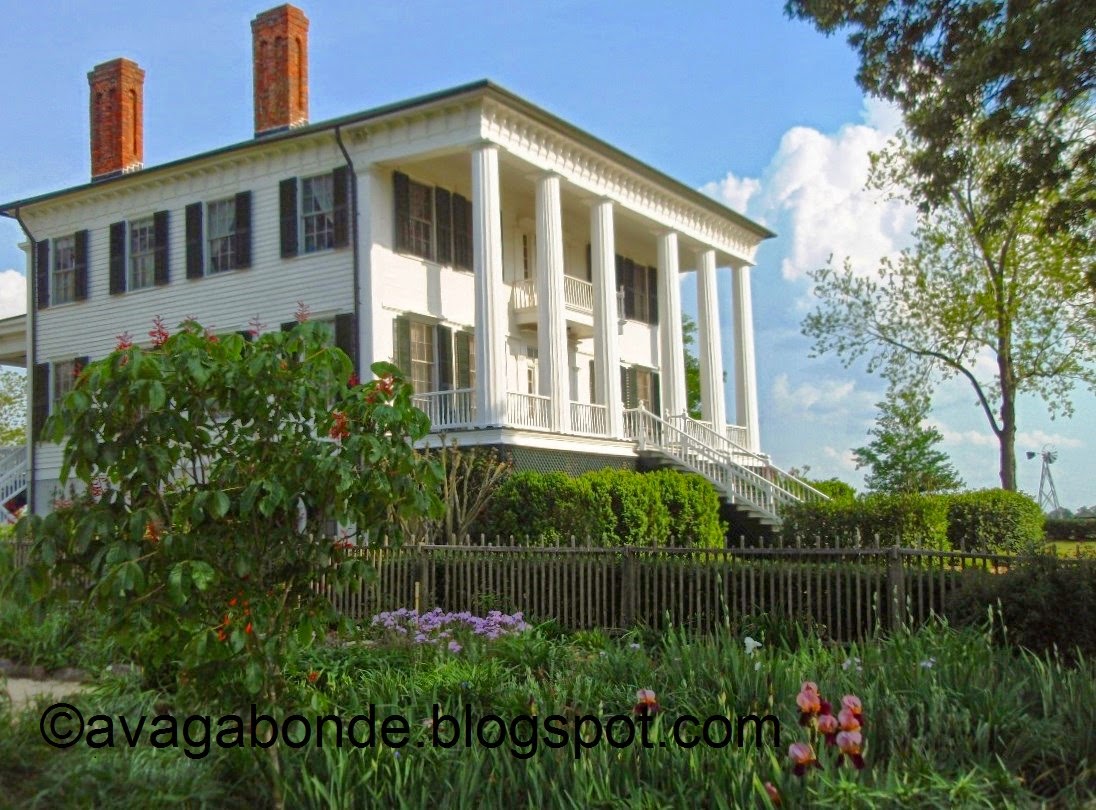 In my earlier post I mentioned that the name of the plantation came from Shoulderbone Creek.  In earlier times it was written "Shoulder-Bone Creek."  You can read about the treaty on the Georgia Historical Marker below.  Click on photo to enlarge. 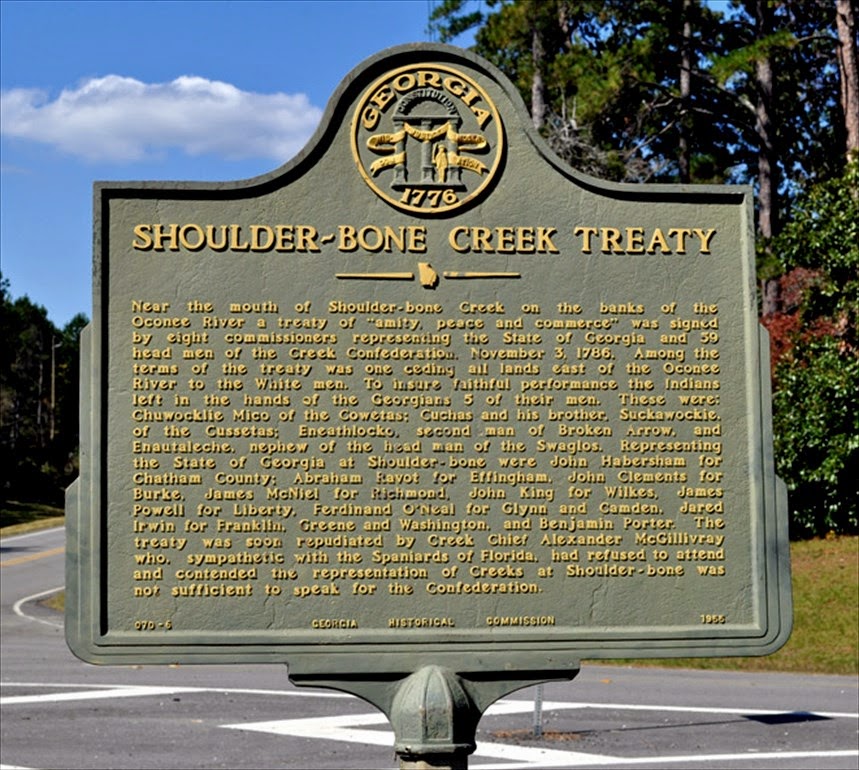 Below a last photograph of the graceful historic home, as the sun was setting, shining in the windows. 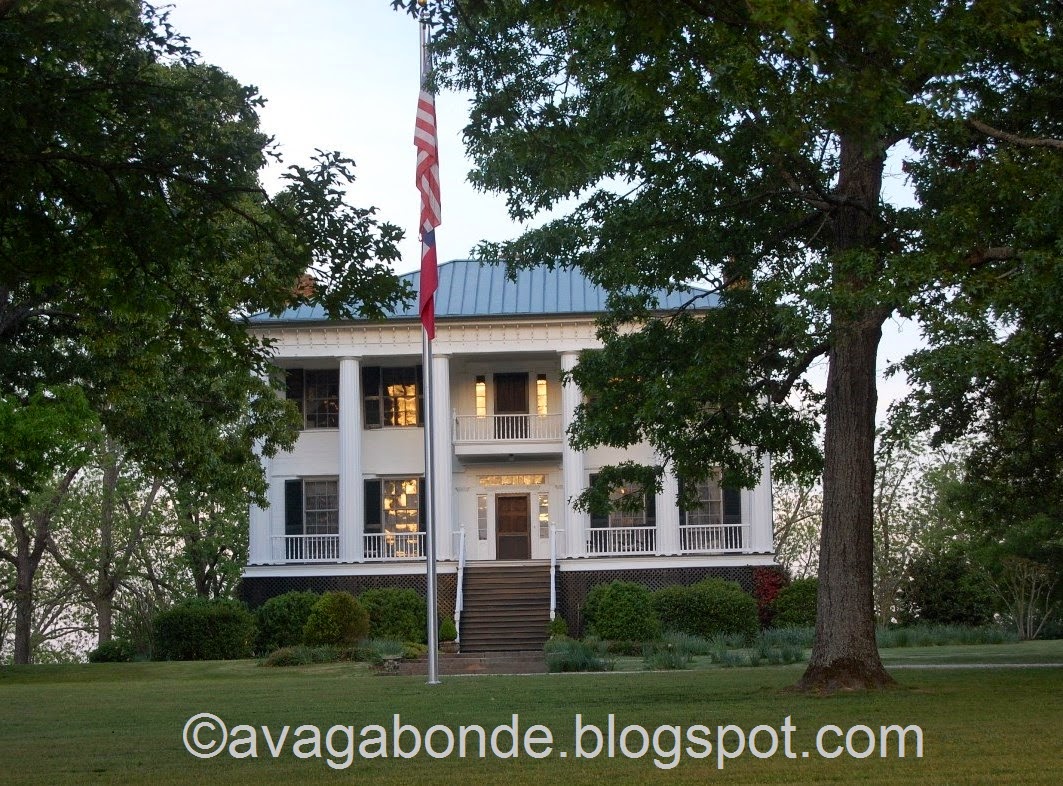 Then we reluctantly have to walk away. 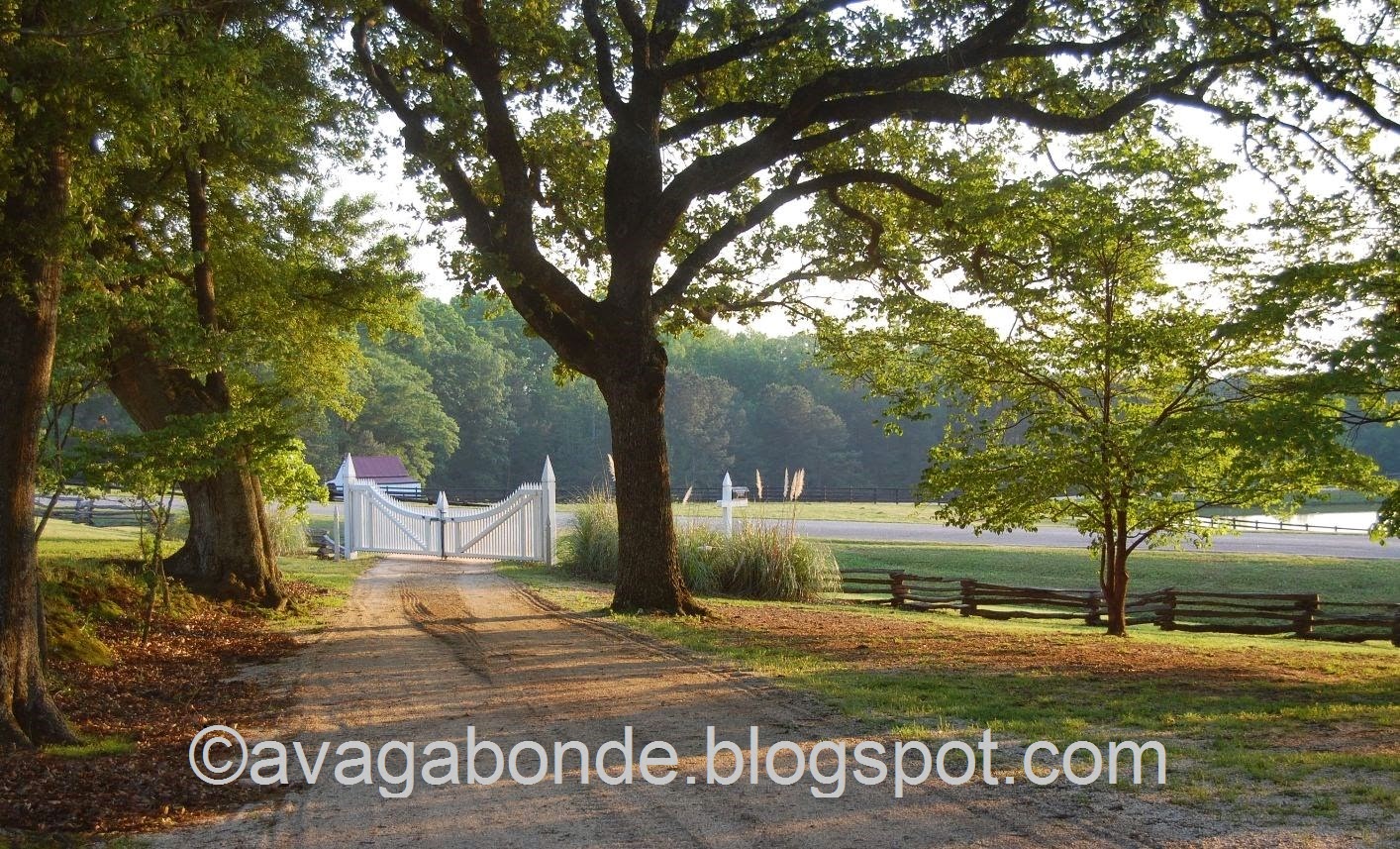 UPDATE:  This past August 2015 I received an email from a gentleman in Augusta, Georgia.  He informed me that Shoulderbone Plantation had been purchased in October of 2013.  A famous now-retired business executive from Atlanta and his wife are the new owners.

Shoulderbone. Makes you wonder where the name came from: someone found a shoulder bone near the creek, and it became the name. Wonderful pictures, and very wonderful posts.

Hope you are now recovered. I wondered (after my recent trip to Macedonia in April) if you wrote it in the middle of the night when you couldn't sleep.

Very interesting post and beautiful pictures. You were so fortunate to get to visit this beautiful plantation. It's construction is very similar to Oak Alley that we visited when we were in New Orleans, except Oak Alley had dormers and a widow's walk. I just love the old mansions like this. I'm so glad that there are people willing to go to the work and expense of restoring them to their original beauty. They are a real treasure.

I am looking forward to seeing photos of your trip to Alaska. I can well believe you took 1500 photos. It's really easy to go through a couple hundred shots in a few hours when you've come across an interesting subject, and I know you saw many interesting subjects.

I too am fascinated by history. The "Old South" must have been a many-layered place: full of beauty as well as cruelty and injustice. I didn't know that North and South call the American (Civil - as we know it) War by different names. Understandable though; a whole way of life was extinguished almost overnight."The Twilight of the Gods" indeed.

(I didn't know you had been unwell, hope you are fully recovered.)

Thanks to all for your nice comments. Friko, I have not been sick, but went on an 11-day trip to Alaska and the Yukon. When I visited Djan's blog I told her I had been up over 24 hours returning back home and she commented on my lack of sleep. It will take me a while to go through the photos I took but will make posts on the places we visited, as time goes by. I write posts in advance so that they can be published while I am away, so I have a few prepared already.

I love the Greek Revival architecture. I fully expected to see Scarlet tripping down the steps in her lovely formal gown ready to go to a party. It could be Tara Plantation.

What a romantic and easy paced life the slave owners lived, but the other side of the coin were the terrible lives of the slaves if owned by some cruel owners.

I loved this post and the photos are wonderful; especially so, if you take the time to enlarge them. Thank you for a very good job of melding the photos with the history.

Welcome home. Wow, you were way up in the Yukon, away from it all. What a dream.
So nice to learn about the plantation houses. And the horses are gorgeous. You were lucky to have an inside look.

Hey, visit my blog. I have an award for you.

I left a response to your comment on my blog.

One of my ancestors died in that house, her name was Mary Montgomery Adams...

Is there a cemetery on these grounds? I have several ancestors (Stembridge) buried at "Shoulderbone" Green Spring cemetery.

Just stumbled across your post and really enjoyed it. My former mother-in-law was a Jackson and grew up across the street and down the road from Shoulder Bone Plantation. The Lanier family maintained a relationship with the Jackson's. We attended several reunions on the property and even a couple of Jackson family weddings. Shoulder Bone is truly a place where time stand still and the Old South lives on!

WWI the plantation was " The Campbell Place" owned by Dorsey and Tyrue Manley Campbell until ca. 1981, at which
time the property was sold by the Campbell children to Mr. Lanier, who restored it beautifully.
The Campbells were jolly and enjoyed entertaining family and friends. The buildings on the property were all maintained in their
original state. The woodwork and mantle frontipieces were all original, faux-painted to look like marble. The topfloor balcony
led to a former ballroom.
As their nephew and niece, we delighted in their company, while our children ran amok with cousins exploring the house and
grounds. We treasure an ethereal photograph of the house and grounds completely shrounded in SNOW!

My grandmother was once married to Robert Lanier, the previous owner of the plantation. I have memories of the house and land growing up, spending Christmas Eve or weekends watching the men of the family quail hunt, etc. We had an old barn cat named Applejack and a pony named Princess that stayed on "the farm" as we called it. It is neat to see the blog and comments regarding it.

My grandmother was once married to Robert Lanier, the previous plantation owner. I have so many memories as a child spending time on that property and in that house. It is neat to see the blog and comments regarding it now that I'm an adult.

This is such a beautiful home; my great, great, great, great grandfather Morris Harris was left a plantation by his father Matthew Harris. The plantation was on Shoulderbone Creek in the southern part of Green County Ga in 1813, would you know if this is the same location or if there is another plantation near by. It is simply gorgeous! Tami Bray