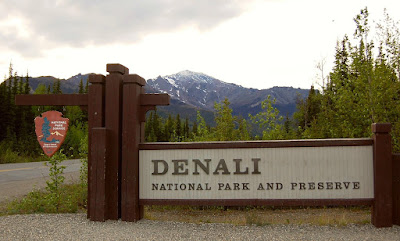 This is a continuation of our Alaska trip (see my 2nd post on Alaska, about Mount McKinley , July 9, 2009.) We arrived by coach at the Denali Wilderness Lodge. The lodge is located by the banks of the Nenana river, about a mile from the Denali National Park entrance. (Click on the photographs to enlarge them.)

Views from the lodge - 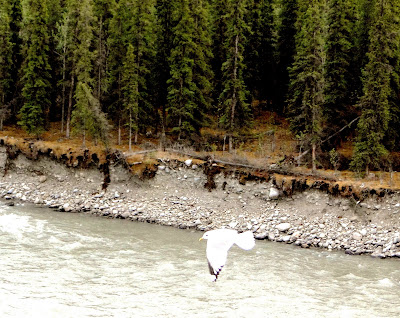 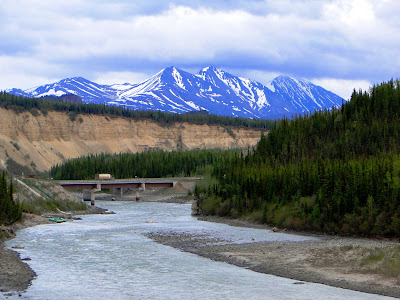 I had heard a lot about the Denali Park and imagined that it had many forests and waterfalls, in a way more like Montana’s Glacier National Park. But it was not like that, it had immense plains of tundra and huge arid mountains. 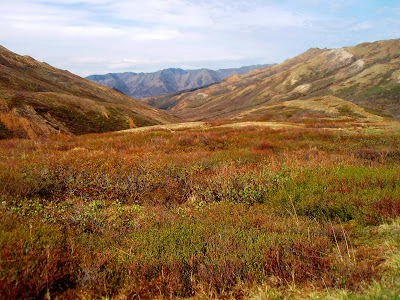 Denali National Park and Preserve was established in 1917 as a park to conserve its large mammal population rather than conserve its majestic mountain Mt McKinley. The mountain was originally named Denali by the Athabascan Native Americans and it means “the High One”. However, the name “Mount McKinley” was given to the peak in honor of the Republican presidential nominee William McKinley of Ohio, mostly as a political statement against his rival the presidential Democrat nominee William Jennings Bryan. It is ironic that it was a Democrat, President Jimmy Carter, who, with his pen, on 2 December 1980, signed the Alaska National Interest Lands Act and more than doubled the size of the National Wilderness Preservation System. Vast new wilderness areas were designated. It added 8 million acres of national forest system, 56 million acres to the national wildlife refuge system and 44 million acres to the national park system. Regardless of political affiliations, I am very proud that a native son of Georgia has left such a large environmental footprint in the conservative state of Alaska for the enjoyment of present and future generations. 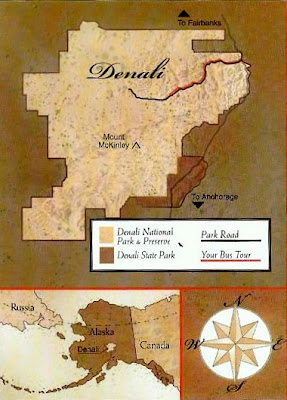 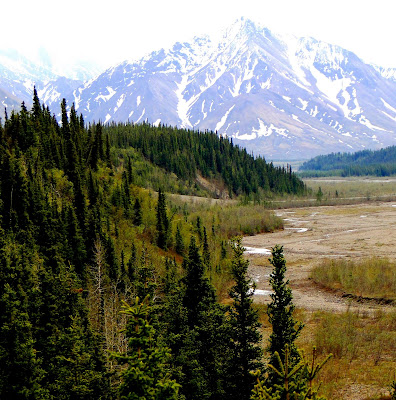 T.H Watkins who was an environmental writer and historian of the American West wrote on the 10th anniversary of the Alaska Lands Act: “… was at once one of the noblest and most comprehensive legislative acts in American history, because, with the scratch of the presidential pen that signed it, the act set aside more wild country than had been preserved anywhere in the world up to that time—108 million acres. By itself, the Alaska Lands Act stood as a ringing validation of the best of what the conservation movement had stood for in the century since Henry David Thoreau had walked so thoughtfully in the woods of Walden Pond”. 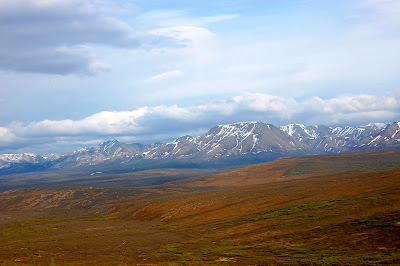 With the 1980 Alaska Lands Act Denali National Park was expanded more than three-fold and is now larger than the state of New Hampshire. In all its vastness the park has only one 92-mile road of which only the first 15 miles are paved. It has no guard rail and is quite narrow. Since 1972 and to minimize visitors’ impacts only park buses are allowed on the unpaved portion of the road. We took the 7-hour Tundra Wilderness Tour to better see wildlife and panoramic views but we sat in the very back of the bus, which was full, and it was difficult to take photographs. I took pictures when we stopped in the Teklanika Area. 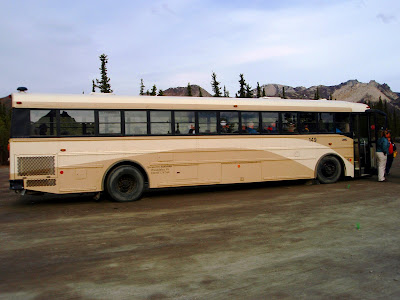 Another bus in the distance - 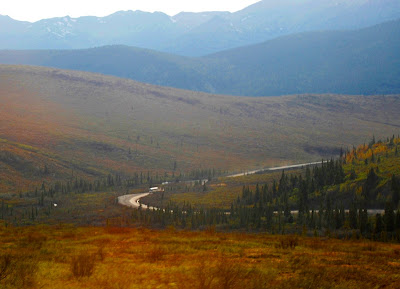 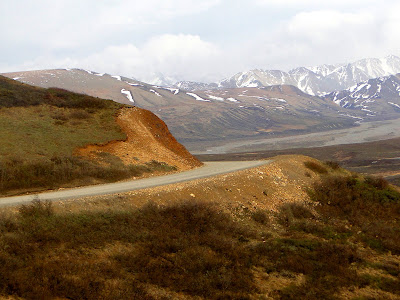 Denali, also called Mount McKinley is 20,320 feet high and is the highest mountain in North America. It was close by but still wreathed in clouds and the snow had not completely thawed on the tundra. (click to enlarge.) 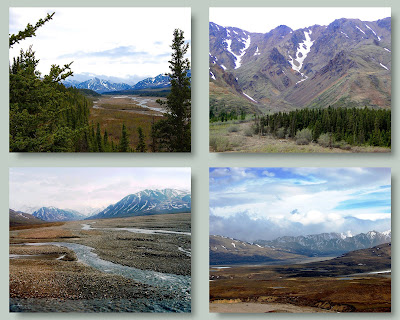 But we could still see the glacial rivers, the taiga, the tundra and the rest of the Alaska Range and its inhabitants. We stopped at the Stony Overlook. 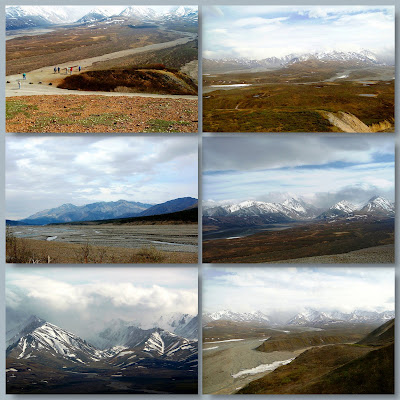 There were colored informative panels depicting the area and animals. 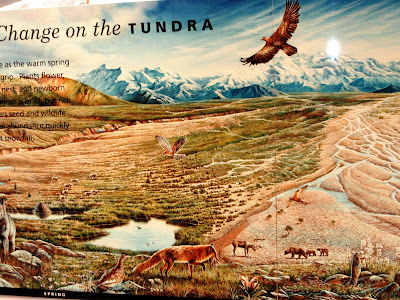 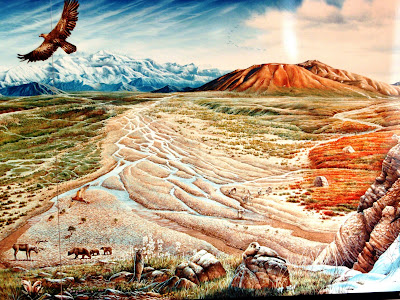 From the back of the bus I tried to take the picture of a moose, but since it’s not very good I am posting an artist rendering of a moose on a 1950’s National Wildlife Federation postcard. 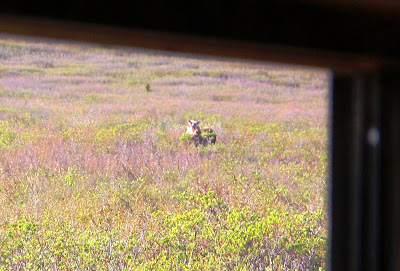 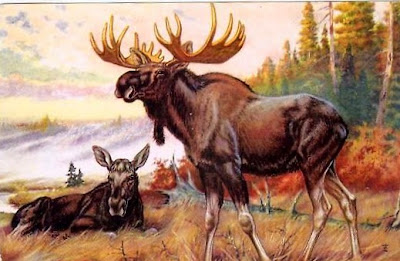 But I saw a bald eagle, far away, near some steep terrain - 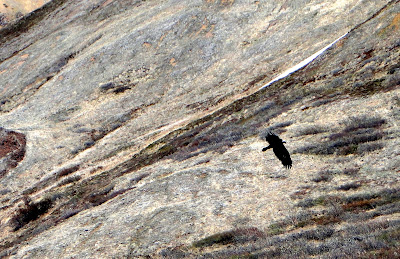 And several Dall sheep – (Mt McKinley was protected as a national park primarily to prevent the early settlers and market hunters to hunt them to extinction.) 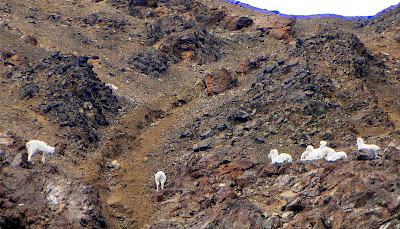 Denali National Park as well as the whole state of Alaska is a jewel for its people as well as for the rest of the country. It is one of the country’s most pristine parks with an intact wildlife community. I hope that the people of Alaska will resist the pressure of the governor, in tandem with the oil industry and developers to sacrifice its beautiful wilderness for material gain. As Alaska former ranger Kim Heacox says “National Parks are paradoxical places. They offer us freedom, yet require restraint. They are best explored deeply, yet lightly. They demand new sensibilities if we are to leave them as we found them, unimpaired…” and still here for future generations. 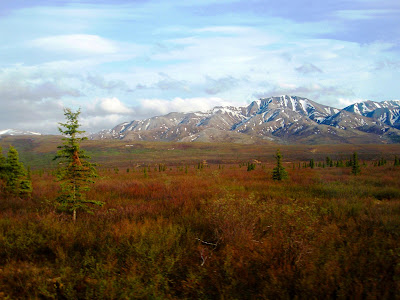 ''We must learn, finally, that wilderness is not, as our history has insisted, a threat to be conquered but in fact a lesson to be embraced,’’ T. H. Watkins. 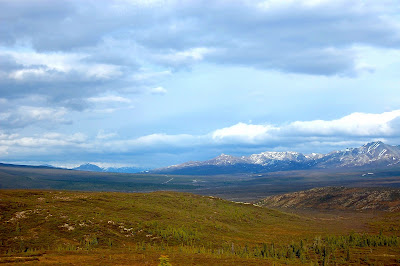 Incredible scenery, nature at it's best! You are so lucky to be able to travel to such beautiful places. Excellent photos and narrative, too. Have a fun weekend!

Your photos are spectacular! Even given the problems of being on the bus you did a wonderful job. I enjoyed your narrative and as usual it was very well written and researched. It has been many years since I took the tour back into the park, but we are hoping to take an overnight trip there in a few weeks, probably going down on the train. We've driven the highway many times, but on the train you see different scenery.

Before the tours begin in the spring if the road is cleared of snow they do allow you to drive a little ways into the park. They also hold a lottery for people to be able to drive the road in the fall after the tours are done. The access is very limited though but I think that next year I will put in for it.

Thanks for posting a very beautiful and interesting account of your tour.

You are a Vagabonde, a wondering artist with a keen eye, traveling to the remotest and less populated and glorious parts of the world, and generously sharing your photographs and descriptions with us. I held my breath as I read the text and looked at what you saw. You transported me ce beau morceau de monde.

thanks for your nice comments, chère Marguerite. We had a great time, but I can’t remember eating great food as those you show us on your blog.
Elaine – it was with some trepidation that I wrote about your part of the country because you know it so much better than I do. I have more posts to write about Alaska, like the train ride, the fjords, the glaciers, and the towns like Juneau, etc. , but I try to mix other subjects in between.
Celeste Maia – Compliments coming from such an artist as you make me very proud indeed. Merci beaucoup.
Claude – Ta visite à Yellowstone et tes comptes rendus m’ont beaucoup inspirés. Il y beaucoup d’endroits sauvages aux Etats-Unis. Merci de ta visite.

Ah, VB, I had been saving your blog post as dessert, so I could savor it and enjoy it. It's so very well written and researched that I almost want to go back and rewrite my own (but I won't).

Now that I am living in Washington state, this trip to Denali is definitely one I will make, and enjoy as you did. Thank you again and again for such an accomplished post!

The air is so pure and the colors so beautiful. It is in sharp contrast to our polluted air and it emphasizes the damage humans do to their environment.

I am in awe of your ability to include so much on your wonderful blog. I appreciate taking a visual tour of places I will never see. Thank you.

Such beautiful and amazing pictures!

Great post, it almost makes up for the fact I didn't get to Denali when in Alaska, but not. Maybe someday.
I've been negligent of late in visiting your site and see I have missed a lot of interest.
I enjoyed the thoughts on aging.

Thanks for the virtual tour! It's good you added a map to your photos. Now we can see where this area is. These mountains and animals living there are very impressive. Great post!

What a wonderfully eclectic blog! I had a bit of a read through and will come back for more. I enjoyed your post about the Cherokee Nation - we lived in Oklahoma in the 80's. I've never travelled to Alaska, but I look forward to doing so - your photos are gorgeous.

Wonderful scenery, you must have had a spellbinding time.
Sad that such a spectacular country brings forth silly creatures like Ms Palin.

Wow! What beautiful photos! You are lucky to be able to travel and see some of our beautiful country! Thank you for stopping by my blog and leaving a comment. I left you an answer there but will also tell you here that I use the free Picasa for making collages. It's real simple and so fast for me. Try it.

This is indeed a beautiful place. I love those blue mountains. I think Alaska is a fascinating place, especially Mount McKinley.

One of he best post i have ever seen...This park is very beautiful and the photos are excellent..I am glad..I am now your follower...Thanks for sharing..Unseen Rajasthan

Hi! what a great trip!! beautiful photos and stories, these indian stories are very touching.
About your comment on my blog, I don´t have any picture of bilro´s laceyet, but when I have it I´ll tell you. For now you could serach on google for " renda de bilro" and you may find something.:)

Hello! A most enjoyable post! Thanks for the photos!

Tremendous summary of this park - so much I didn't know. I hope we can visit it one day. My niece lives in Alaska with her husband and 3 small children. It was wonderful to have them at the wedding. I don't think they will ever leave Alaska, because he loves the wilderness too much.