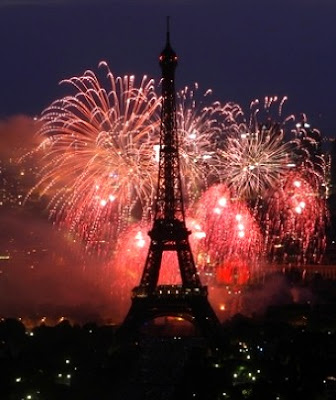 In France the 14th of July is the National Holiday of the Republic, called le 14 Juillet or La Fête Nationale. The name “Bastille Day” is used only in English and if someone had asked me about Bastille Day when I lived in France it would have taken me a little while to understand to what this referred.

On the 14th of July 1789 the French people revolted against the monarchy and the power of the Catholic Church. A Parisian mob took up arms and stormed the Bastille – a prison in Paris. This was more a symbolic gesture of defiance than the actual freeing of prisoners which were only a total of seven common criminals. This date marks the Great Revolution - the beginning of the republic and the new regime, just like the 4th of July started the American Revolution and birth of its republic. The absolute French monarchy fell when the Bastille fell. On 26 August 1789 the new aspirations of the French Republic were defined by the “Declaration of the Rights of Man and the Citizen”– which inspired the values of the Universal Declaration of Human Rights adopted in 1948 by the United Nations - read it here if you wish. 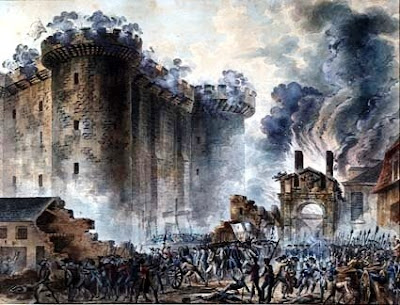 The 14th of July has kept its official status with a traditional military parade in Paris. But there is also much fun in attending the dancing and fireworks taking place in most towns in the rest of the country. This may be the only time people can see many French flags being flown as usually flags only adorn public buildings. 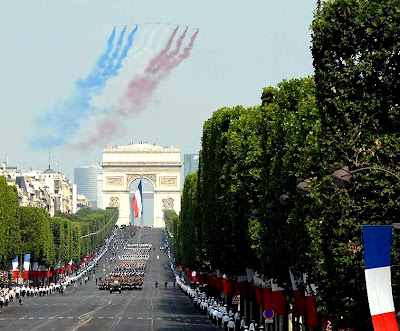 The three colors of the French flag, blue, white and red were combined by the Marquis de Lafayette (1734-1834). 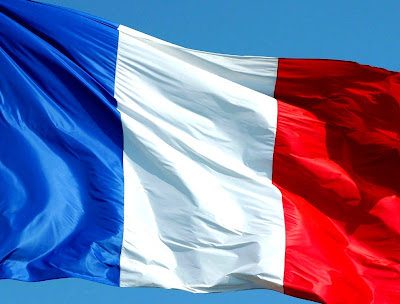 The ceremony, attended by the President of the Republic, starts in the center of the Arc de Triomphe, the site of the tomb of the Unknown Soldier (see picture below.) In 1916, the president of a French war memorial association “Le Souvenir Français”, created in Alsace in 1887, brought the idea for a tomb to an unknown soldier to represent the graves of soldiers who died for France. This was formally adopted by the French Senate in 1920 and an unknown soldier, from the battle of Verdun, was interred in the Arc de Triomphe. Also in 1920 an Unknown Warrior was chosen in the United Kingdom for their monument, and many countries followed suit. On Memorial Day 1921 the United States Congress approved honoring an unknown US World War I soldier in a “Tomb of the Unknowns” in Arlington Cemetery. 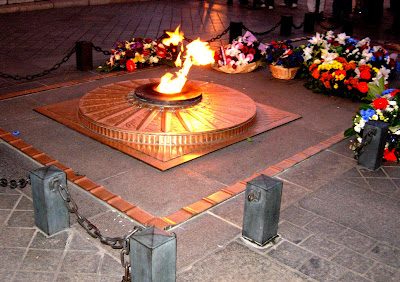 The parade then goes down the Champs-Elysées and includes many French military regiments and top military schools.

Below are the Guards of the Republic. 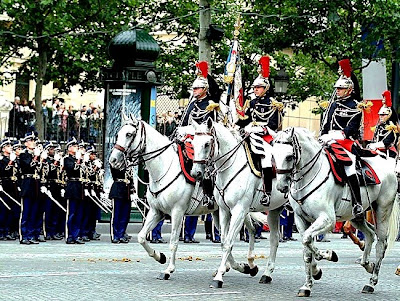 Below is the well known Regiment of the French Foreign Legion (known today as an elite military unit made up mostly of foreign nationals of different cultures). 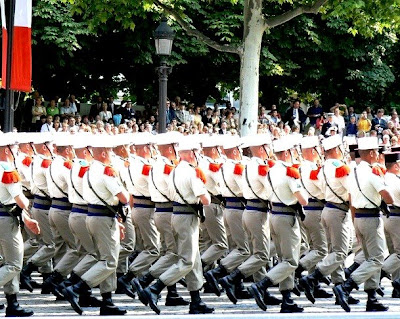 Here is the First Spahis Regiment in formal regalia (which fought in the first Gulf War). 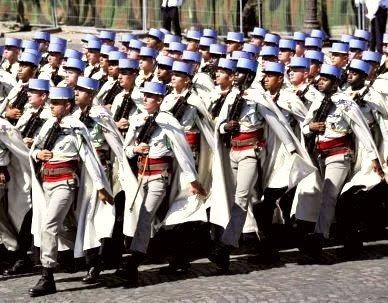 Below are cadets from the French military school of Saint Cyr (France’s West Point.) 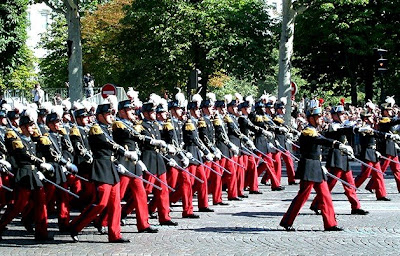 The Air Force will usually have special flights overhead, and a parachute coming down. 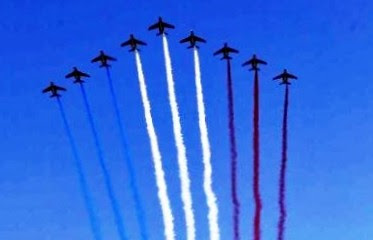 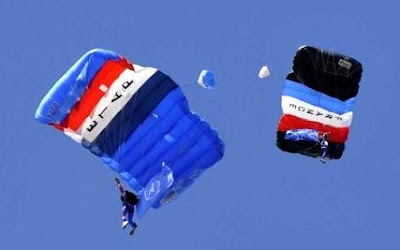 The holiday starts the evening of the 13th with local outdoor balls and fireworks. When I was a small child, on July 13th my parents would go to my cousin’s town, about 1 hour south of Paris. In the evening, the volunteer marching band would give a little concert then there would be a marching procession through several streets. The band would come first, followed by war veterans, then the town’s people and their families. Children would hold “lampions” - lighted paper lanterns on poles - and the march would end back at the village square where a small fireworks display would take place followed by an outdoor ball where everyone would dance. 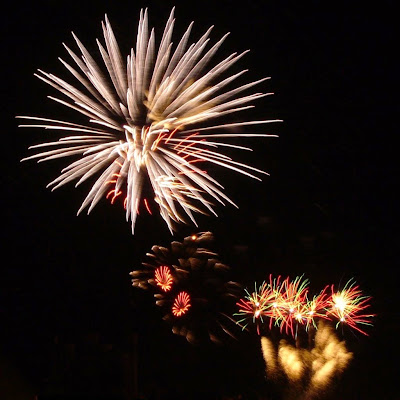 It was so much fun walking with my little cousins behind the band. The origin of the French Revolution was far from our minds or why, on the entrance of our schools, it was written “Liberté, Egalité, Fraternité” (Liberty, Equality, Fraternity (brotherhood)”. 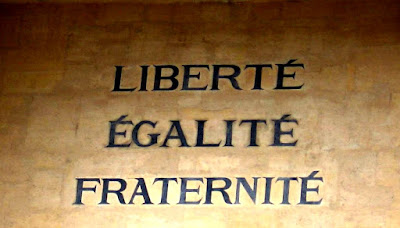 This was one of the mottos, started during the Revolution, which was formally adopted by the French government on 14 July 1880 as the French motto. The US motto, approved in 1782, is “E Pluribus Unum” (From Many, One).

Some of the French motto could have been included in the American Pledge of Allegiance, but were not. (France does not have a pledge to the flag.) The Pledge was written in 1892 by Francis Bellamy (1855-1931 from Mount Morris, NY) a Christian Socialist Minister after he was pressured to leave the Baptist Church, because of his socialistic sermons. He was then hired by the editor of “The Youth’s Companion” as an assistant and asked to write a pledge of allegiance to be printed on school pamphlets. Francis originally wrote as follows: “I pledge allegiance to my Flag and to the Republic, for which it stands, one nation, indivisible, with liberty and justice for all.” He was going to include “equality and fraternity” after the French motto but since many people were opposed to equal rights for women and blacks, he did not.

Here is a vintage postcard showing the pledge as it appeared until 1954. In 1954 the Congress, after strong lobbying by the Knights of Columbus (the largest Catholic fraternal organization in the world) agreed to add “under God”. 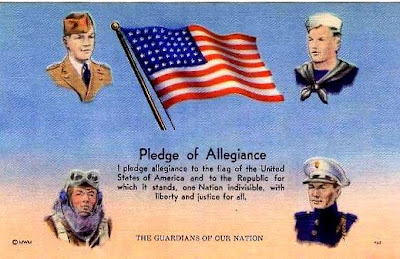 Before 1789 the Catholic Church in France, the largest land owner, imposed taxes on the people and was tremendously wealthy. It had many special privileges but was very intolerant and omnipotent. After the Revolution a strong separation of Church and State was established. This recognized freedom of religion, freedom of thought, freedom of conscience and the neutrality of the state. This has been a basic tenet in France since the 18th Century.

Actually the French philosopher, Baron de Montesquieu (1689-1755), was the first to advocate in his writings the separation of church and state. Montesquieu was a favorite of Thomas Jefferson, the author of the Declaration of Independence, and as Willard Sterne Randall writes, in his book Thomas Jefferson A Life, “Between 1774 and 1776, Jefferson made a systematic study of Montesquieu who more immediately influenced his writing…” and gave him his firm belief in the theory of separation of church and state. Jefferson’s ideas were also fueled by another French philosopher, Voltaire (1694-1778.) Voltaire had said “I do not agree with what you have to say, but I'll defend to the death your right to say it”. Jefferson made also eloquent pleas for freedom of speech and of the press. He is attributed to have said “I am opposed to any form of tyranny over the mind of man." 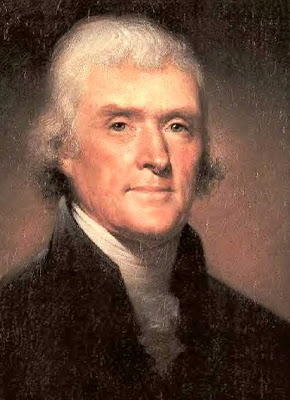 Jefferson also said: “Every man has two countries, his own and France.” The historical interconnection of France and the United States has been long but with some differences, just like within members of a family. To illustrate this point, here is a vintage postcard showing the 4th of July in Paris in 1918. It is a painting showing American soldiers passing before the statue of Washington in Paris (which is still standing in the Place d’Iena in Paris.) 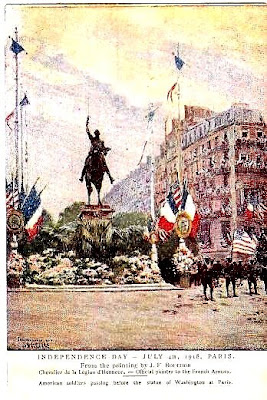 Yes, the French Revolution was Liberty, Equality, Fraternity!
.... But human nature does not follow the ideals.

Today, France is a republic, but the ideal of liberty, equality and fraternity are not here....!

It should make a new revolution to gain gender equality and the rich-poor.

What a great history lesson, VB! Thank you for this. I especially loved the picture of the Spahis regiment, wearing capes! I also didn't know that the French flag is red, white and blue, because, as you say, it is not shown everywhere like ours is.

You did a wonderful summary of your French holiday. I have always been fascinated by Jefferson, and when I found out he too loved France, and also that quote, I agreed and loved him more. He had his faults, but I admire him for many reasons.

Your descriptions of Bastille Day remind me of my memories of 4th of July. Sometimes I feel very far removed from the origins of this holiday. I get depressed with our country's history. But those early days were remarkable, as were France's. Very bloody and frightening, but many were bold and determined.

very nice pictures, specially the first one with the fireworks and Eiffel Tower!

Very interesting post. I knew there were a lot of historical connections between the U.S. and France but I didn't know all of the things you wrote about. Again, I really enjoyed seeing your vintage postcards. Your collection is so diverse and beautiful.

Friends – thank you so much for taking the time to read my post and even more for writing a comment. I am pleased that you enjoyed the posts because I have fun writing them.

Great post Vagabonde. I love history, too - and especially the history of France. Talleyrand is my specialist subject, as it were. Lots of new (to me) and interesting information here. Thank you for posting.

Hi! About your comment on my post, I really don´t know if it bear fruits, I think not, ´cause I never saw. But Í´ll pay attention when it´s the right season annd then I´ll tell you. I have a fig tre in my house too, but I dont´t know how to make a jam...

Excellent and interesting history! Thanks for all the hard work you put in.
I hope you were able to celebrate the day?

Fennie – I am pleased if you learned something from my post.
Paty - When my figs are ripe, I’ll make a post showing how I make jam, so you can see how easy it is.
Friko – I do not know any French people around here anymore. My friends retired and went back to France, so I did not celebrate this year unfortunately. My celebration was my post really.

Trés bien! «Louis» enjoyed your post and thanks you for your visit!

Louis La Vache - Merci beaucoup Louis for coming to my blog. I enjoyed the celebration of the 14 of July at the café on your blog.

This is a fantastic post packed with so much information and beautiful images. Your photos are beautiful and I'm quite taken by the painting by Jean Pierre Houel.

Thank you for reminding us why these holidays are declared and deserving of celebration.

Thank you so much for the education on Bastille Day. Our countries are very much linked. And I didn't realize that some of what we think of as Thomas Jefferson's own words were those of Voltaire!

I stopped by via DJan's blog, and am glad that I did!

Hi, thanks for visiting my blog. This is a great post, really informative with great illustrations. regarding the programmes that I use, the dynamic photo is for making hdr/ pseudo hdr pictures. (if you look at my earlier posts or in the tags bar, you can see what i mean) I don't use that so much anymore, only for playing. Mostly I now use a free programme called photoscape- free download if you search online. I use it only to crop, sharpen and adjust the colour levels, that's it really. I am just getting better at taking the photos now. I hope you stop by again, and i'll definitely keep coming back here :)