In and Around the Cherokee Indian Reservation in North Carolina 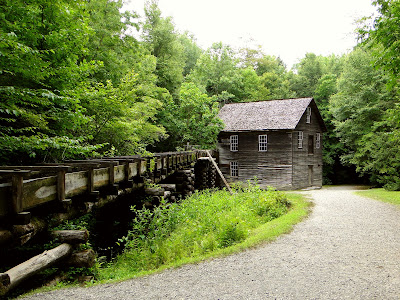 This is the continuation of the post called “Oconaluftee Mountain Farm Museum"of 13-August 2009 (earlier posts on the Cherokee Reservation can be found under “Native Americans” on the right side of my blog under the list of categories. ) After recounting our visit to the farmstead I ended the post by wondering whether we should keep exploring the area around the Oconaluftee River or go back to the Cherokee Indian Reservation in Cherokee, NC. Well we decided to stay around the river area and see what else we could find. Oconaluftee is the name of the river valley where, a long time ago, there was a Cherokee village and Appalachian community. 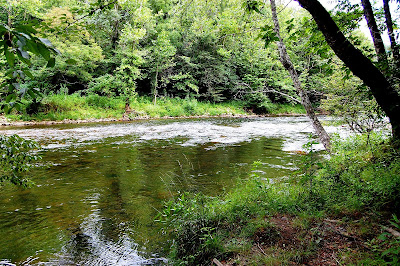 We drove down the road about ½ mile and saw a sign directing us to the “Mingus Mill, an 1886 Turbine Mill.” We parked and followed a trail to the site of the old mill. 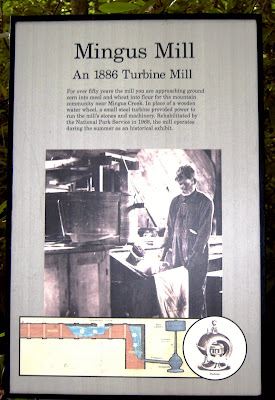 Click on the pictures to enlarge them.
This historic grist mill, still on its original site, does not use a wooden water wheel to power all of the machinery of the building, but it uses a small working cast iron turbine instead. In the early 1900s this was still an operating mill grinding wheat and corn for the Appalachian community nearby. It stopped operation in the 1930s when the land, and the mill, was bought to be part of the newly created Great Smoky Mountains National Park.

John Mingus had the mill built in 1886 by Tennessean millwright S. Thomas Early and his assistant Aden Carver. It was completed in three months at a cost of $600. Until it was purchased by the Park Service in 1934 this mill operated at wholesale and retail levels. In 1937 when it was restored, Aden Carver was in his 90s and helped with the restoration. The mill was closed during World War II then reopened in 1968. In summer the mill is open and demonstrations are given showing how the mill originally operated. 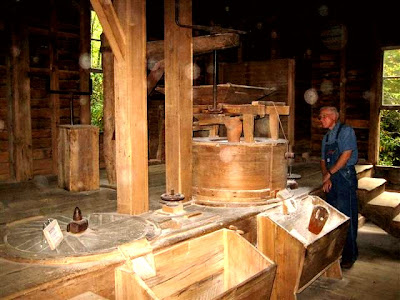 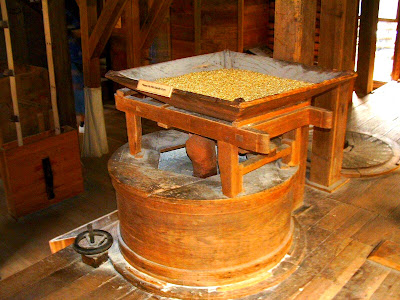 Mingus Creek is the source of water for this mill. The water comes to the mill via a sluice (canal) and a wooden flume thus turning the turbine which provides power to the mill. See sketch below. 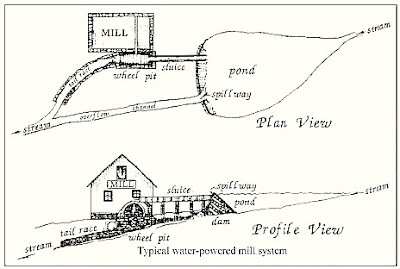 Starting at the mill we walked along the sluice canal 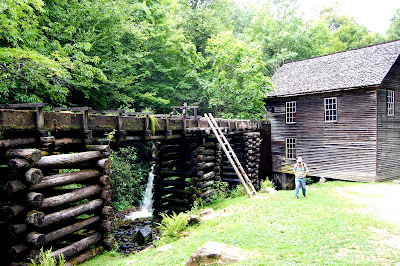 then I climbed a bit to look inside the sluice to take a picture. 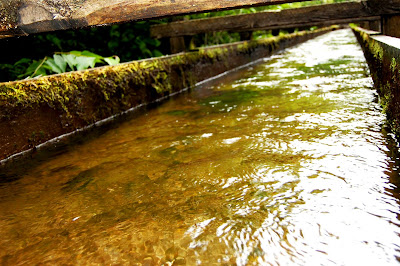 We went up a trail to see where the creek emptied into the millrace. (Note: A sluice is a water channel that is controlled at its head by a gate (from Dutch word 'sluis'.) For example, a millrace is a sluice that channels water toward a water mill.) 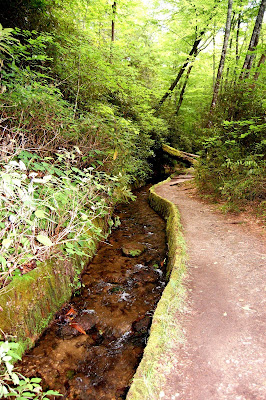 We kept walking and looking at wild flowers 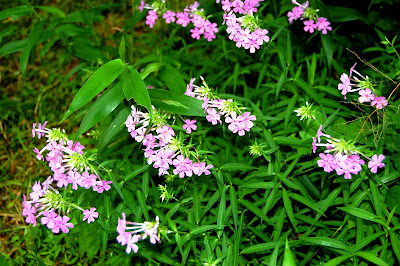 and mushrooms along the way 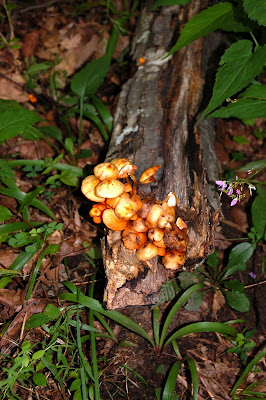 Then we arrived at Mingus Creek, where some of the water is diverted into the millrace ( which then flows down to the mill.) 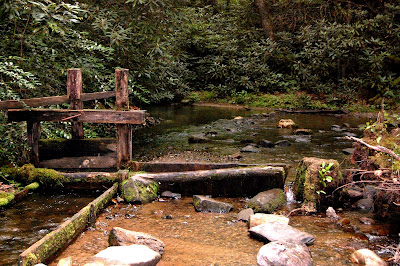 It was so peaceful near this creek, just the birds chirping and the soft murmur of the water. We stayed there for a while, and then went back towards the mill to take pictures close to the wheel pit. 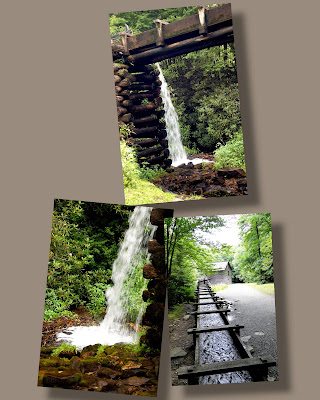 Don't forget to click on the pictures to enlarge them.

After a last look at the mill we left 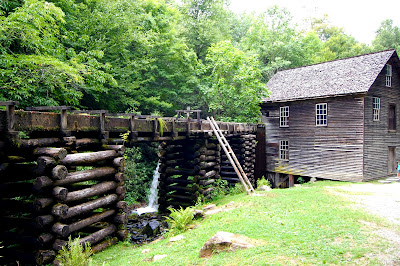 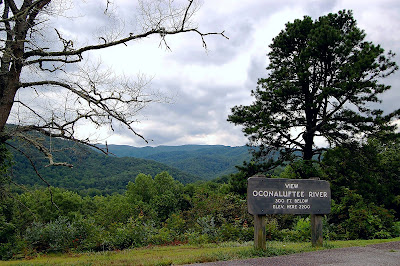 But it was getting late and we were a bit hungry so we decided to get back to the Reservation. 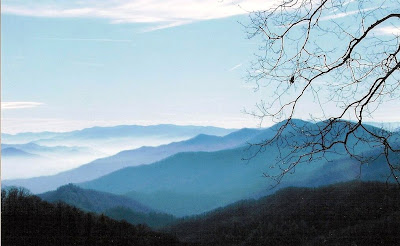 We stopped at a Cherokee restaurant to eat some authentic Cherokee fry bread with beans and a side of sweet potato fries. 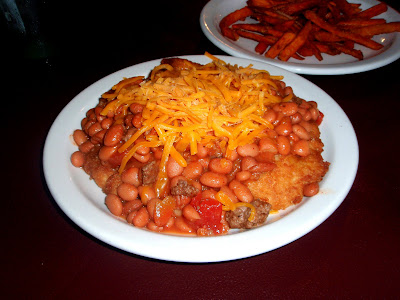 ….For a moment evening sun sits on a mountain top before he descends down;
And pretty soon native night creatures will be the only sounds;
Then the mountains become covered with a smoky mist;
As nature gives the land a good-night kiss;
Every star is lit as they sparkle throughout the night;
And treetops dance in the water with shadows by the moon light;
And soon the land of Cherokee becomes quiet;
Until morning, nature says goodnight.
-Frank Goss, 2006 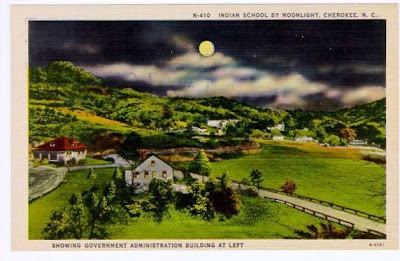 Let me end by saying how grateful I am to all my blogging friends for leaving comments on my blog. I read them all and I thank you for your kind thoughts and encouragement. I especially enjoyed reading your comments about the French bashing subject I talked about in my last post. Unfortunately these anti French sentiments are still being passed around. Last Tuesday I received a copy of an anonymous email being forwarded at large about the ungratefulness of the French people towards the USA. It certainly would be bad if it was true but this email originated in 2003 and the facts in it are inaccurate. A good source for checking if an anonymous email is accurate or malicious, on any subject such as medicine, politics, religion, etc. is to go to the web site called Snopes, Urban Legends - it will show if the email is true or false. In the case of the French bashing showing how ungrateful the French were, it was false. Here is the site: http://www.snopes.com/.

Thank you again for visiting my blog and writing comments on my posts – it is like having many new friends all over the country and new and nice connections all over the world. Having a circle of good friends in the blogosphere is something I appreciate.

I am going on a trip and the next one or two posts will be published while I am away. I won’t be able to go and comment on my readers’ posts either, but shall do so when I come back.

A vintage postcard you may like to thank you 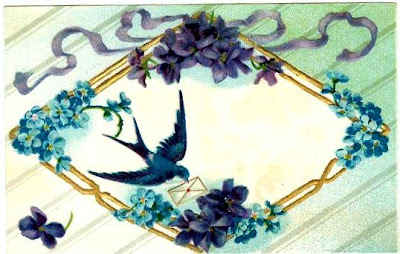 Another very interesting trip that I enjoyed "wandering" with you. Mingus Creek, the walk along the sluice canal (learned a new word), the wonderful Mingus mill, and the food at the Cherokee restaurant. Always learn new things, always enjoy looking the the enlarged photos you post.
Have a wonderful new trip! We will be looking forward to your return.

I told you how much I loved the farm when you posted it. The mill is beautiful too, that weathered wood in the trees. It's very good that the mill was restored so people in the 21st century can see how it works.

That last image of the Smoky Mountains is spectacular and perfectly shows the reason for their name.

You know you've got to watch out for that Cherokee fry bread. Native Americans have eaten too much of it and it became a huge health problem with obesity. But wow, it must taste good with those beans, and once in a while won't hurt (just like fried chicken, right?).

Enjoy your trip, and I'm glad to have found you and your wonderful blog.

Two things stand out to me: first is the picture of the mountains, layer after layer of them... so beautiful that I for a moment thought of the Cherokee who must have gazed at them long ago, and who felt the same awe that transported me.

And second, the mill itself is still standing, all these years later. I wonder how many things we are using will be the same in two hundred years.

I am constantly amazed at how much I learn from your blog. You are so meticulous in your research and such a good photographer that I feel like I have been there with you as I read your post.

Being a Westerner I have little knowledge of the history of the Southeast and am so pleased to have this opportunity to discover it.

There is one similarity, however. The Tohono Indians on the reservation near Tucson make fry bread and it is very popular at all of our outdoor celebrations.

Beautiful tour of the region and it looks so different to anything we have here. I have a friend in South Carolina and his photography is also awesome, some rare beauty in those parts for sure. And you're right about Snopes, it's a great resource for exposing the fakes. Frankly, I know three French people and they are all absolutely charming.

Fascinating trip and lovely pictures again! I do so enjoy touring with you. I look forward to your next post, wherever you may take us.

We've been to Cherokee many times. In late October we'd head there from Atlanta & spy out BOILED PEANUT stands. Yum!

lovely reading about your trail along with the beautiful pics....very nice!

thanks for stopping by my blog!

You have some awesome pictures on your site - the areas you visit are so different to mine, but then that's what makes the world go around and why people want to visit other places!

So nice of you to take us on this beautiful virtual tour :)

Beautiful photos, here and on your last post.
There was a radio documentary on CBC recently about the Cherokee people and the terrible march. Such a sad story of betrayal and hardship.

What a fascinating post, cher! Your pics are superb and I love the old mill. So quaint and rustic. And that photo of the mountains is breathtaking. I adore the vintage postcards, too! Great looking food, too! A+ (sorry, I'm a former teacher) Hope you're having a grand old time up in Acadien country! Cheers!