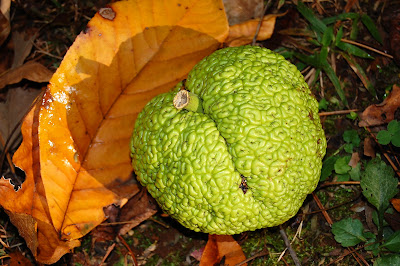 While we were in Nashville last month visiting our daughter’s family, we walked to the playground near their house subdivision. Our two grandsons showed us the way as we had never been there. It was mid-morning during the week so few people were around. Our eldest grandson (soon to be 4 years old) was eager to get to the playground. 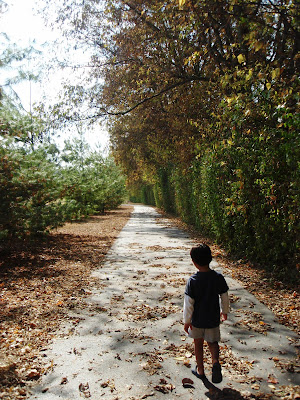 We were following the children and at the same time looking at all the surrounding vegetation. 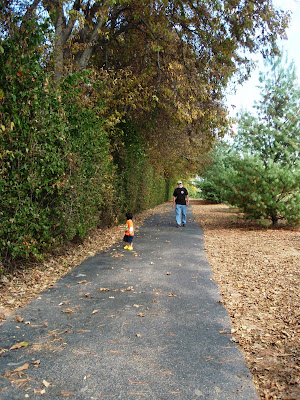 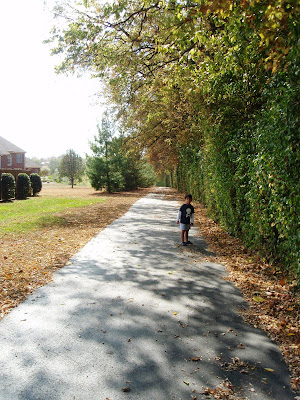 I could see some large green round things below the trees – which I took for tennis balls. But coming closer, I saw they were not tennis balls. 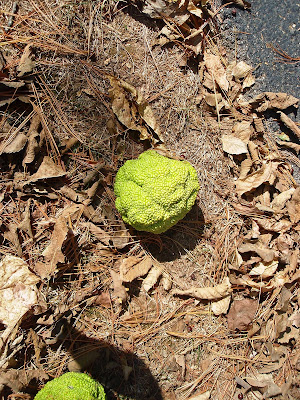 I wanted to examine these weird looking balls but I was falling behind – after all, it was our mission to get to the playground quickly. 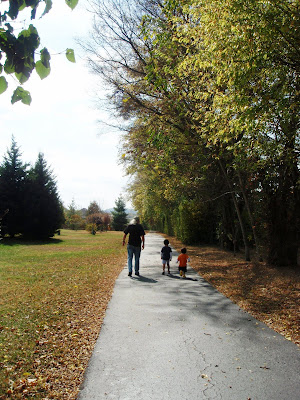 No other children were using the playground so our little grandsons had a great time going up and down the slides. 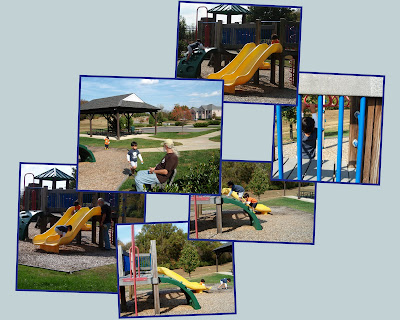 After the little kiddies had climbed the playground gym many times, we had to go back for lunch. They were also a little tired. 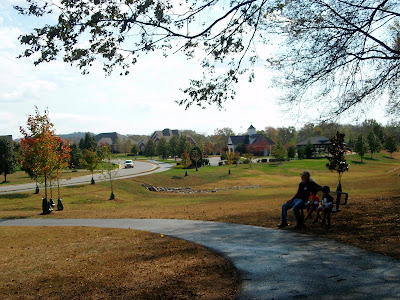 While they rested I went ahead to take a better look at those bright green balls. It’s a little bit hard to distinguish them on the picture below. They can be seen on the ground below the pine trees and hanging on the tree on the left. 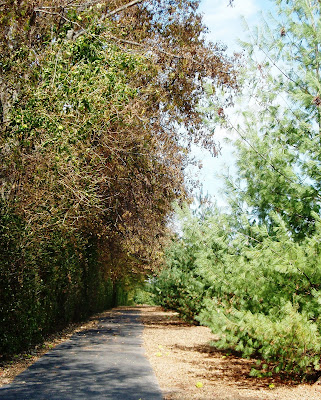 They are quite heavy and large as you can see below. They look like a brainy orange. My husband told me they were called “Osage Orange.” 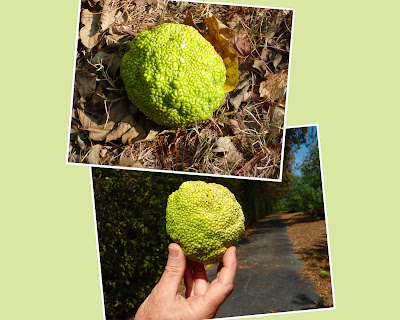 So we walked back home…..well, some of us did… 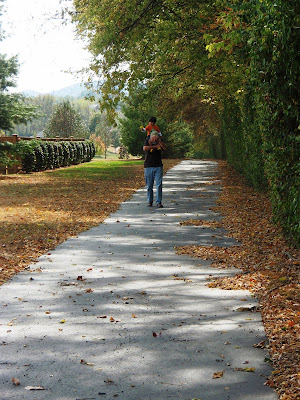 When we were back in Georgia I looked up information on the Osage Orange. It is actually a Maclura pomifera, commonly known as Osage Orange but also as Hedgeapple, Green Brains, Mock Orange and Bodarck. The common name comes from the American Indian Osage tribe because they lived near the home range of the trees bearing these fruits. They do have a pleasant citrus smell. 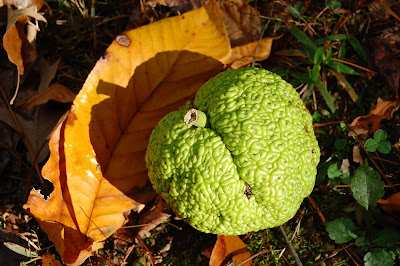 I found out that the American explorer Meriwether Lewis wrote to Thomas Jefferson from St. Louis on 26 March 1804 (before his travel west now called The Lewis and Clark Expedition) "I send you herewith enclosed, some slips of the Osages Plums, and Apples. I fear the season is too far advanced for their success." He had obtained the cuttings "from the garden of Mr. Peter Choteau, who resided the greater portion of his time for many years with the Osage nation." Jean-Pierre Chouteau (1758-1849) was an early settler. With his brother Auguste, he fostered good relations between the US government and the Osage Indians. He negotiated the Osage Treaty of 1808. 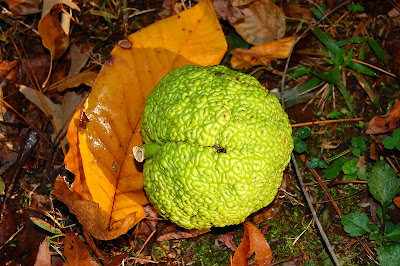 Jean- Pierre Chouteau had introduced these species of Maclura pomifera (Oranger des Osages de la famille des Moraceae) to gardens in and around the village of St. Louis at the end of the 1790s. He said that he had received them from an Osage Indian and so they became known as Osage Oranges. They are not edible apart from the seeds which are prized by squirrels. 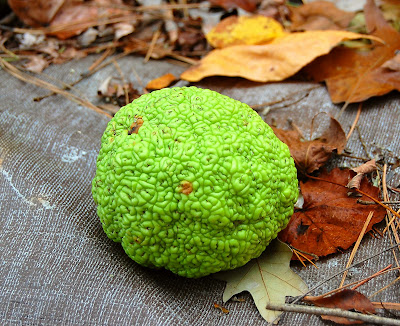 I always love your collage of pictures, and the playground does look like such a nice place to play, with Grandpa looking on. Those Osage oranges are definitely unusual. Leave it to you to find their background and enlighten me! :-)

I first saw these as a child visiting friends in Nebraska. The plant itself is tough and was introduced to the area as strong hedgerow plants...fences, if you will.
Each fall someone brings them to our local grocery store where they are displayed for sale in the produce area. I've never tried them but they say that they repel bugs. I don't know if that is true or not.

Another interesting fact... My mom had these laying on the ground next to the foundation of their house. She was told that they keep the spiders from coming into the house. I think you place them around the house in early fall. Love your pictures!

I saw these on another post - they are so other-worldly looking!

Well that's a fruit I didn't know. An Osage Orange. How is it pronounced. In French just one way presumably, but in English? Oh Serge? Ossage?
Oh Sagger? Oh Saga?

Does look a bit like a green brain, doesn't it?

Strange thing, looks like a green brain to me! Happy to see how you enjoyed the visit and your grandchildren. Pictures great, as always!

There you are, you taught me something else yet again.
Never heard of an Osage orange before.

We have a huge --12 -15 foot tall Osage orange that I started from a seed. I love to bring the fruits in the house just for the smell.

i grew up eating green oranges, before they ripened to become orange orange. Osage oranges though not orange in colour but they have a lovely texture. i would say intelligent texture. Never heard of them Vagabonde, so sad you can't eat them. Hope you had a good time with with your daughter's family and enjoyed the company of your grand children

Taking the little grandchildren to the playground is such a wonderful way to spend the morning! Very interesting about the osage oranges. I had never heard of them before.

I recall that sister Ruth showed these on her blog a couple years ago, Vagabonde. Very strange, indeed. I've never seen real ones, so they must not be all that popular? I love that you had time with your daughter and grandkids. Thank God Nashville isn't all that far away from you!

They have those in Texas also; I did not know squirrels liked them; good thing there are millions of squirrels here!

Gosh those are fascinating.

Enjoy the day with family and friends Vagabonde. Happy Thanksgiving. hope you are doing fine.

I have never seen or even heard of Osage Orange. It's absolutely beautiful and just fascinating. Thanks for checking on all the details -- I never would have known!

Hope you are having a lovely time!

Somebody should have snapped you up as an excellent researcher - thanks to you, all of us are more knowledgeable. Pity they're not edible, though - they would make an interesting dessert!

i was struck by how mild your weather was...quite amazing to see you walking in T-shirts when I am in the deep freeze.

Thank you all for coming to my blog and leaving a message while I was away. I appreciate it very much. This is going to be a busy season for all of us but I’ll try visiting your blogs and reading all the posts I missed. Thank you again.

Osage orange? That's the first time I heard of that. Now I am curious, I'll embark on a fact-searching mission this weekend about this.

I can't believe how many people haven't heard of the Osage orange! They're so common here, as well as in Oklahoma, Kansas, Missouri and Arkansas - and doubtless spread much farther afield. Such a lovely post you did about them. And yes, they are known to repel insects.

One tidbit you may or may not know is that the name "Bowdark" is an Anglicisation of the French bois d'arc, which of course refers to the use of the wood for hunting bows.

Isn't it such fun to share experiences with such marvels of nature?