Blog Intermission (entr’acte) no. 10 - May Happiness 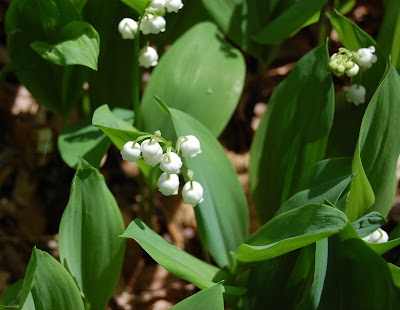 From the time I was a child until I left for the USA I would received some Lily of the Valley on the 1st of May. My father would give “un brin de muguet” a sprig of lily of the valley, to my mother and me and all the women who happened to be nearby. 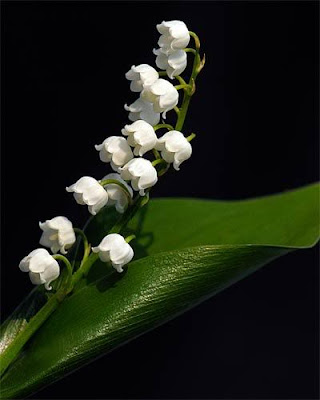 This was always “good luck” for the rest of the year. On that day florists sell lily of the valley in their shops and it is also sold in kiosks everywhere. It is sold on the 1st of May in the streets in Paris. If my grandfather would visit us that day, he would bring us some lily of the valley too. 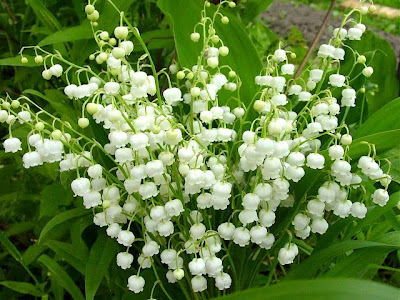 I was surprised that this was not a custom in this country and a little sad as the little white bells are so delicate, fragrant and the meaning is sweet. 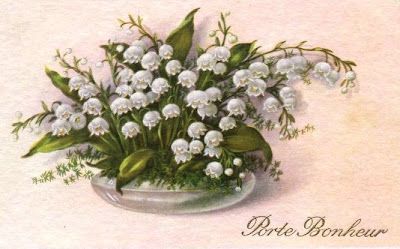 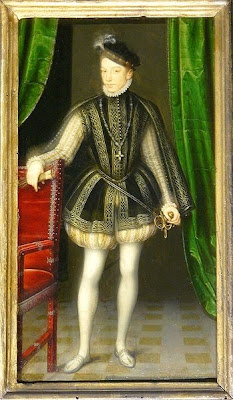 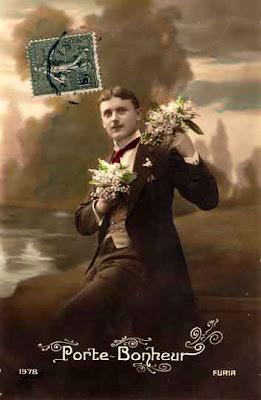 This custom has survived and men still give lily of the valley in France to their family members and close friends to wish them good luck and happiness for the year ahead. 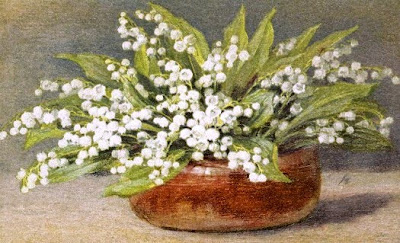 I read that for a long time balls were organized and called “bals du muguet” (lily of the valley dances.) It was a dance where parents were not allowed. Ladies would wear white and young men wore a lily of the valley on their lapels. 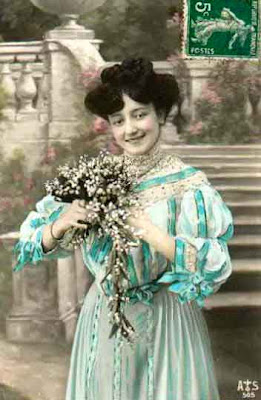 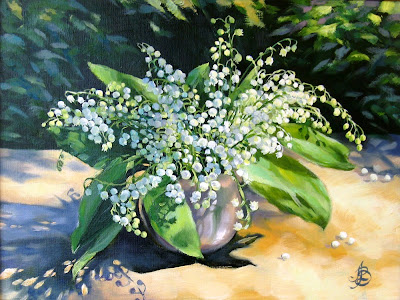 Lily of the Valley painting by Vedeshina Zinaida, Russian, Contemporary

In addition to paintings, I also like it when lily of the valley is used as a decoration. 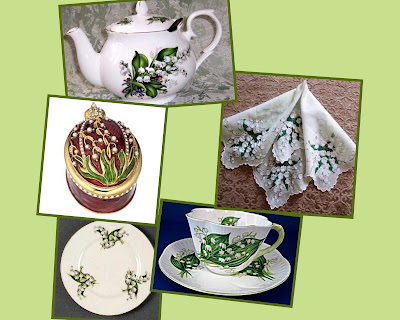 Lily of the Valley (Convallaria majalis) comes from Asia – I think Japan. It has been used for medicinal purposes - to strengthen memory and restore speech. Even though they look so pretty and innocent, all parts of the plant are considered poisonous. 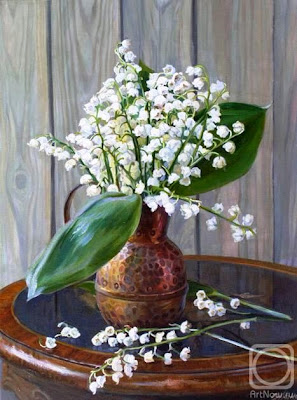 In the language of flowers the lily of the valley means a return of happiness and sweetness. 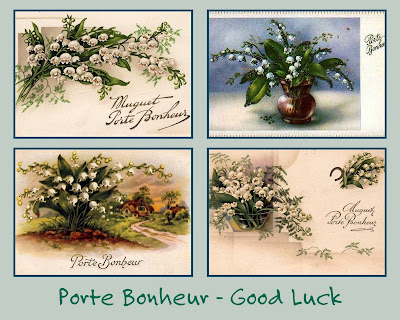 In France selling lily of the valley on the 1st of May is big business and millions of the flowers are sold. 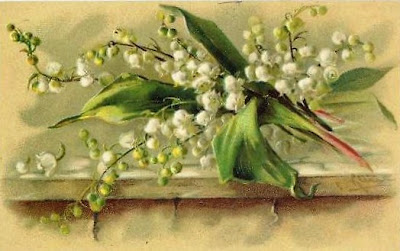 Another vintage postcard from my collection. This one is from Germany.

I lived near a large forest and knew where to find wild lily of the valley. I would go there on the eve of May 1st and would gather some bouquets – usually for my mother since she loved the plant. She was born in May and adored the “muguet." 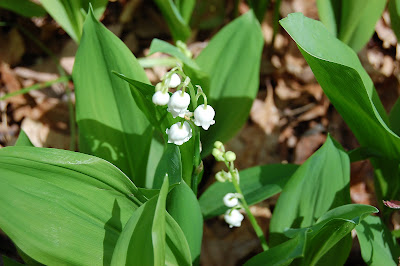 I took this picture at the Swan House Gardens in Buckhead, Atlanta.

There is an old French song that is about the lily of the valley on a Russian melody. 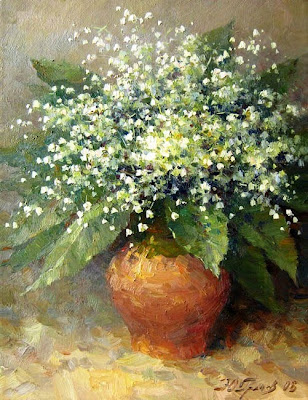 Lily of the Valley Time

It came back, the time of the “Muguet” (lily of the valley)
As an old friend found again
It came strolling along the docks
To the bench where I waited for you
And I saw re-bloom
The brightness of your smile
Today more beautiful than ever
Muguet time does not last
Any longer than the month of May
When all the bouquets will have faded
For us nothing will have changed
As beautiful as ever
Our love song
Will sing like on the first day
It is gone muguet time
Like a tired old friend
For a whole year, to be forgotten
But when he left he gave us
A bit of spring
A bit of its youth
So we can love
We can love for a long time.

I am sending this vintage lily of the valley postcard, virtually, to all my blogging friends, to bring you happiness and good luck for the rest of the year. 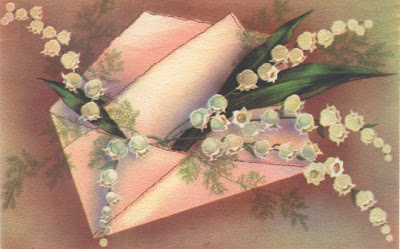 Oh, my! Merci! I have heard that song before -- many times. I never knew the words.

Lily of the Valley is one of my favorites. Always the sign that spring is really here, so fragrant, so dainty, so pure. Right now, mine are far from being ready on May 1 -- they are merely little two-inch pips of green, poking out of the ground. But soon -- And I will pick a large bouquet and even though they make me sneeze, will bring them in the house and love them!

I'm grateful that you wrote the lyrics in French and the translation. I read the French as I followed along and I think I may print these out to practice! And thank you for sharing the history -- I had no idea of this tradition but I like it so very much. Your illustrations are perfect!

I remember making a post about the lily of the valley four years ago and made similar research as you now have done! But my post was not so complete and well illustrated as yours! Bravo! (1,50€ a piece this year!) :-)

I loved this post! I used to have a lot of Lilies of the Valley in our backyard back in Illinois. It was wonderful in spring. I loved getting handfuls of the petite flowers to add scent to my kitchen. I miss them now. Thank you for this post.

I learn so much from these posts. I don't think you can get Lily of the Valley here, too warm I suspect but it's such a delicate thing.

Hello Vagabonde, What a wonderful post. I love the way you have put this together with so many different elements ... the photos, the vintage cards, and the songs. Very nicely done! I will be the first to admit that Lily of the Valley fragrance is one of my favorites. I definitely agree that this should become an American tradition as well. Thank you for stopping by my blog and leaving me such kind comments. Yes, I've also attended a few vintage postcard shows. They are fun! As time goes by I hope to do some posts including some of my cards from other than Yellowstone. I have a few that I think you will enjoy. I wonder if you are on Twitter? Thanks again and best regards from Seattle.

This is a great post and had given me a lot of information that I did not know. My mother always said that lilies of the valley in the house meant that there would be a death in the family. This is a much nicer version of what the flowers are about. I will believe this one in preference to my mother's story which came, I believe, from her mother. Diane

I LOVE "Lily Of The Valley" Flowers---so pretty and delicate! And I know that BEAUTIFUL Song, too. This is such a sweet loving tradition. I wish we had it here.
I did notice that THE BRIDE, in the Royal Wedding---The Beautiful Kate, had a lot of Lily Of The Valley in her Bridal Bouquet....LOVE is the operative word, isn't it?
You always have such rich and full blog posts, my dear..Even in your absence! AMAZING!! I hope you are having a Wonderful time on your trip!

Oh THAT tune!!! Never knew it was about lily of the valley - what a nice surprise. I do love the perfume.
Caroline

Hi, Vagabonde!
I've read this post a bit later and I liked it especially the embroidered handkerchief on one of the photos. the second picture of lily of the valley is stunning!
The video is interesting and the voice of Francis Lemarque I loved too.
THe only thing I did not understand: I supposed this music is "Moscow evenings" by Soloviev Sedoy.
https://www.youtube.com/watch?v=-SwumVFUMBg