Blog Intermission No. 11 (entr’acte) A Bridge in Vinings, GA 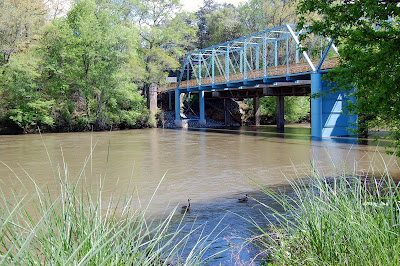 Two weeks ago in my post “Spring in Atlanta” I ended by saying that we were driving away from the affluent Buckhead area of Atlanta and going toward the Chattahoochee River. We followed the West Paces Ferry Road to the small unincorporated town of Vinings, GA. 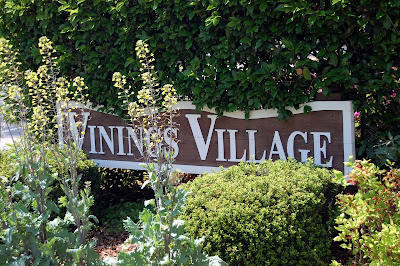 This area has a long history as the markers show. 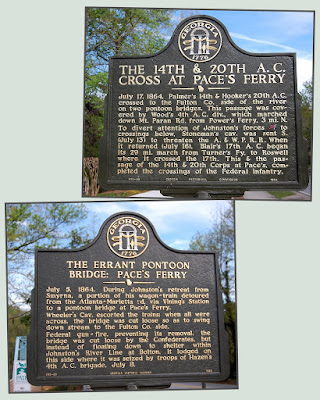 As you can see from the markers above during the retreat of Confederate General Joseph E. Johnston, his forces used a pontoon bridge here in July 1864. 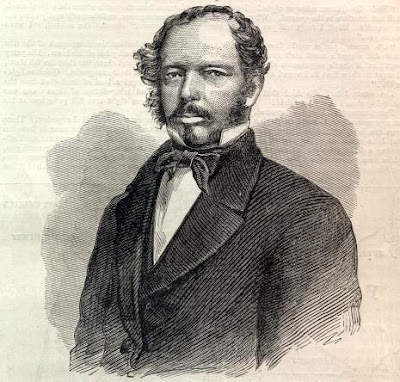 In the South and other places there will be sesquicentennial commemorations, from April 2011 to June 2015, to mark the 150th Anniversary of the Civil War. This conflict started on 12-13 April 1861 in Fort Sumter, Charleston, South Carolina, when the Confederate troops defeated U.S. federal forces. The Confederates demanded that a Union garrison surrender the fort and fired on it at that date. Union forces surrendered two days later but this event launched the four-year war resulting in a total of 646,392 dead or wounded. Troops would also cross the Chattahoochee River on horseback in the shallower areas of the river. 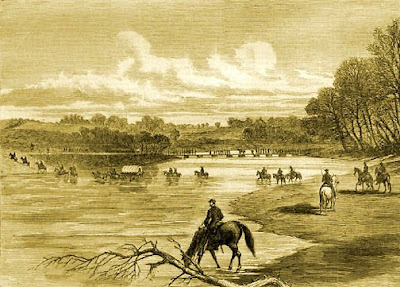 The little town of Vinings was officially recognized as a community in 1904 and a one-lane bridge was built across the Chattahoochee River (until then a man named Hardy Pace operated a ferry-boat there.) This one-way bridge was in great use and even though it was quaint, it was decided in 1972 that it should be torn down and replaced by a two-lane concrete bridge. 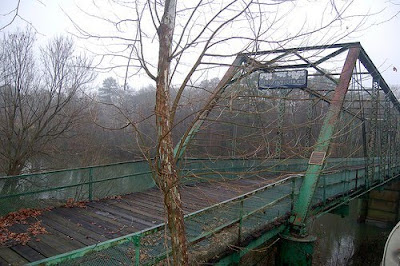 A couple who lived in the area, Cecil and Hermione (known as Hermi) Alexander, did not want this bridge to be torn down because of its history. They petitioned the Fulton County Commission arguing that it would be more cost effective to leave the bridge in place and build the new one alongside it. This was done. Then Hermi led an effort to raise money to keep the bridge as a pedestrian crossing. The bridge found new life as a pedestrian walkway. Tragically in 1983, not far from this bridge, Cecil and Hermi’s car was struck, head-on, by a car driven by a drunk teenager. Hermi was killed. Local officials renamed the crossing “Hermi’s Bridge” in her memory. 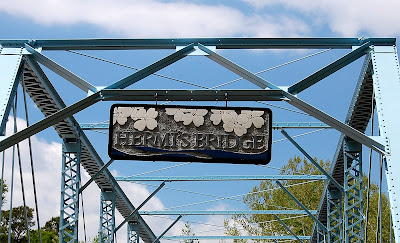 A dedication ceremony took place and as Hermi was very active in the Civil Rights movement and had been the first female jury commissioner in the county, a plaque was installed which states: “ Hermione Weil Alexander. She built bridges across gulfs of prejudice and ignorance.” 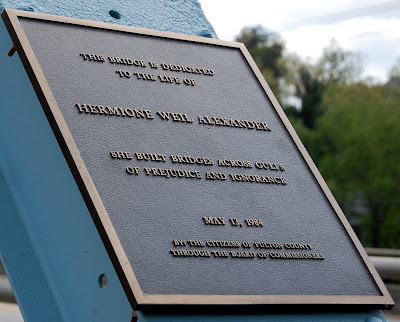 In 2006 Hermi’s bridge was deemed unsafe for pedestrians and closed. There had only been minor repairs and a new coat of paint applied in 1916. Cecil headed up an effort to raise the funds necessary to restore the bridge to its former grandeur. He had flyers printed outlining the history of the bridge and his late wife’s contribution. Cecil is a retired architect whose firm designed the Atlanta Fulton County Stadium and the Coca-Cola World headquarters. In 1957 he designed his and Hermis’ house, a round house. Life Magazine in a 1959 issue described it as “a modernist showpiece.” In March 2010 the house was listed on the US National Register of Historic Places. 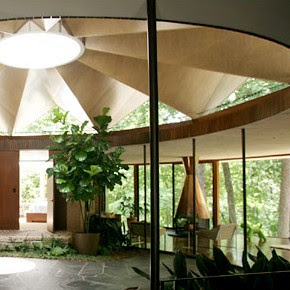 Cecil Alexander was a Lieutenant Colonel in the US Marine Corps during the war flying 60 dive bomber missions in the Pacific. He was in the movie “Driving Miss Daisy” and was the basis for one positive Marine character in Pat Conroy’s book “The Great Santini.” 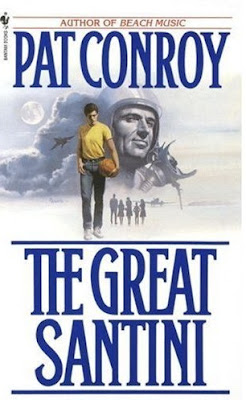 Book jacket of the Great Santini by Pat Conroy

Cecil fought in the Civil Rights movement. With GA US Representative John Lewis, Cecil who is Jewish, formed the Atlanta Black Jewish Coalition. He has received many letters of thanks (from Marthin Luther King, Jr. and other dignitaries.) 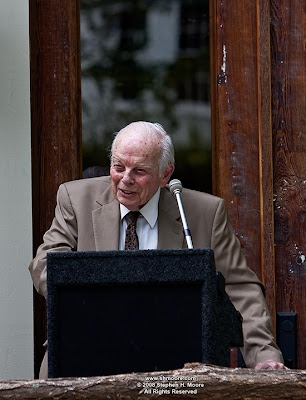 Cecil was successful in raising the $1 million needed for the restoration project and on 23 November 2010 Cecil Alexander, now 92 years old, attended the ribbon cutting ceremony for the newly rehabilitated Hermi’s Bridge. 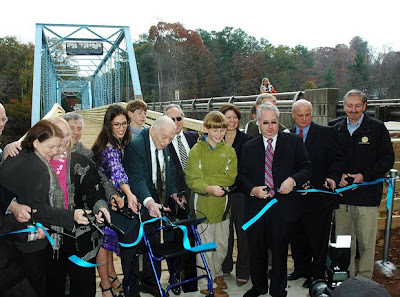 We parked the car and crossed Hermi’s bridge. 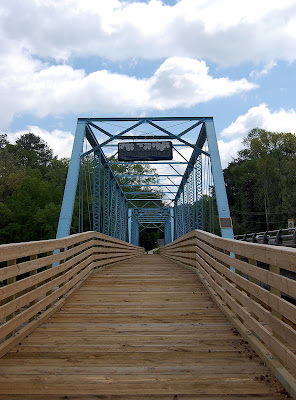 We stopped a minute to look at the Chattahoochee River flowing below. 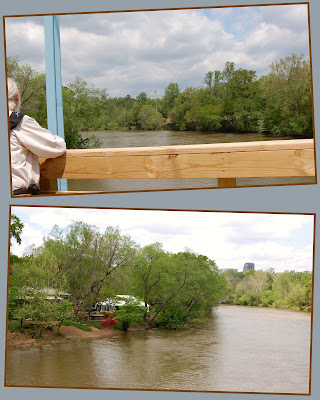 Once across we followed a path by the bank of the river, which happens to be on the grounds of a leading Atlanta private school, the Lovett School. Much vegetation and flowers were on the path. We also found another historical marker, on the old Paces’s Ferry Road and a fountain in front of a school building. 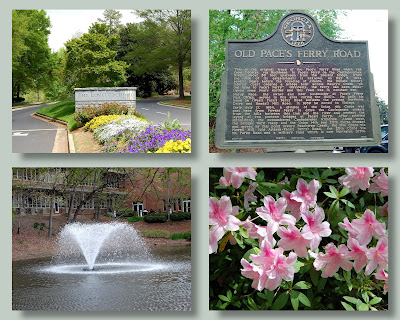 Through the overgrown vegetation I could distinguish Hermi’s bridge. I came close to the river to get a better view. 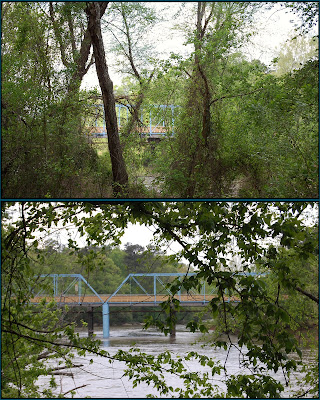 I took one final picture of the Chattahoochee River 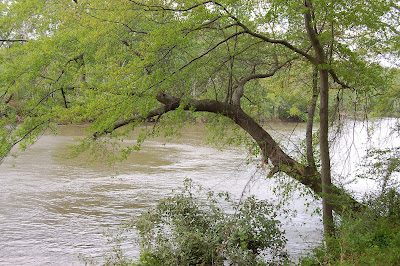 before we crossed back over Hermi’s Bridge 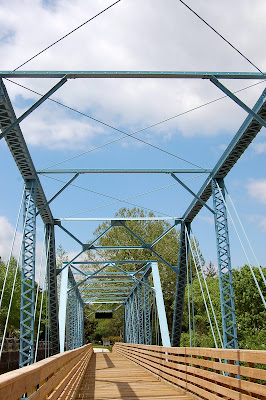 then walked back to our car. 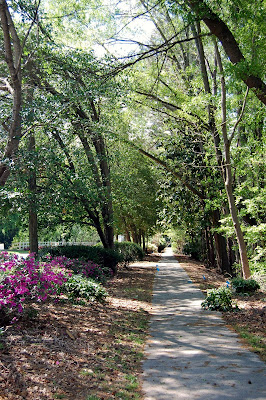 What a fine historian you are, Vagabonde. Your way of taking us through many decades of events that have taken place along this river bank gave this reader time to reflect on what people can do to each other and with each other.

How wonderful to learn all about Hermi and Cecil on Mother's Day 2011. It was a wonderful tale about a couple who would otherwise be lost to me. Thank you!!

What a wonderful History this Bridge has...and The Alaxanders! GREAT GREAT People! You always manage to share the Humanity of every place you visit---it enriches the "place" so much, because of that! I LOVED this post, my dear!

A tragic story with a positive ending, nicely told - thank you.
Caroline

i so enjoy your posts!
i love the South..it's history,beauty and people!!!

You have a great way of sharing your experiences!

What a fascinating history Hermi's bridge has -- I love the way you weave beautiful photography, vintage images and wonderful narration to introduce us to a part of the world with which we are not familiar. I'm becoming especially interested in Georgia since our youngest is headed there in a month for a six-month internship. I hope he gets enough out of his 22-year-old college student head to explore the territory and history. A longshot, but it would be so worth it!

I'm so glad that Hermie and Cecil managed to keep the old bridge from being torn down and that Cecil was able to get it restored. They sound like a very special couple.

It's great when you can visit historical places. I like how, in your trips, there is a certain meaning that captures the essence of certain places, and I'm glad that you share it with us.

P.S. - My son used to be on the faculty at Westminster School. Boo, Lovett!

I love old small bridges so this post is a treat

The things you are show-and-telling me about my former backyard! I'm in awe of all the gems you are finding in that metro area, dear Vagabonde! Thank you.

Blogger ate all my comments yesterday, Vagabonde. I hate it. But what I said was something about your ability to find the things in my previous backyard that I've never even heard of. Well, at least never seen. Good for you...and for me on the receiving end. Thank you. I love all these tidbits of information.

What a lovely story. I love local history, wherever I travel. The small stories are always the best ones.

Just got wrapped up in this post. And the restaurant above will need to be a stop if I ever feet to Atlanta Ga. (I keep getting distracted by Charleston, SC. But I recently did make it to Savannah.

Thankmyoumfor this touching post. Teaches that one person can make a difference.

I just came across your blog while searching for images for my father Cecil Alexander's memoir. I love how you have documented the bridge my parents saved with thoughtful words and lovely pictures. Cecil, now 94, will be delighted to see this! Thank you for helping to preserve these memories.
Judith Alexander Augustine