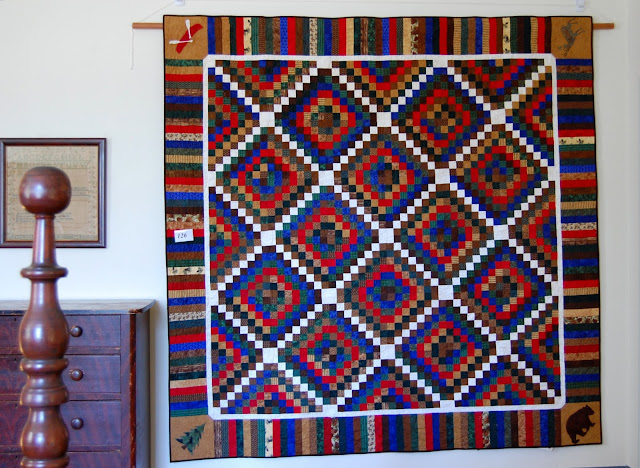 In my last post I showed quilts that were exhibited on the ground floor and the hall of Bulloch Hall in Roswell, Georgia.  Today it will be the quilts exhibited upstairs, on the second floor.  As I walked up the stairs I had to stop and take a look at the quilts against the wall.  One appeared very western to my eyes.  It is called "El Glows" by Ellen Lott of Roswell. 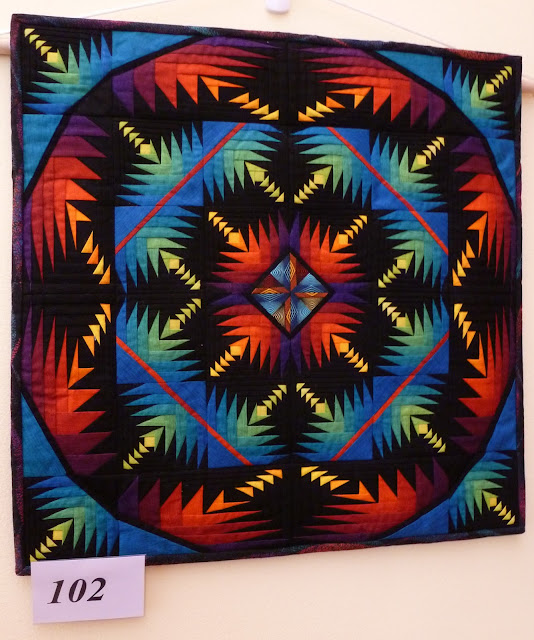 Another quilt, next to it, was also very striking - called "Serengeti at Twilight" by Leona Harden of Lilburn, Ga.  Quilt #100 below.  (This one is for sale too.) 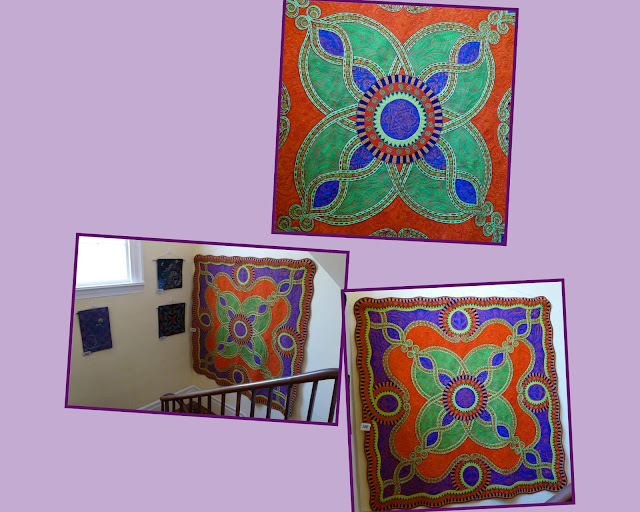 So many quilts - on the walls, on doors, on furniture... (Click on each photo and collages twice to enlarge.) 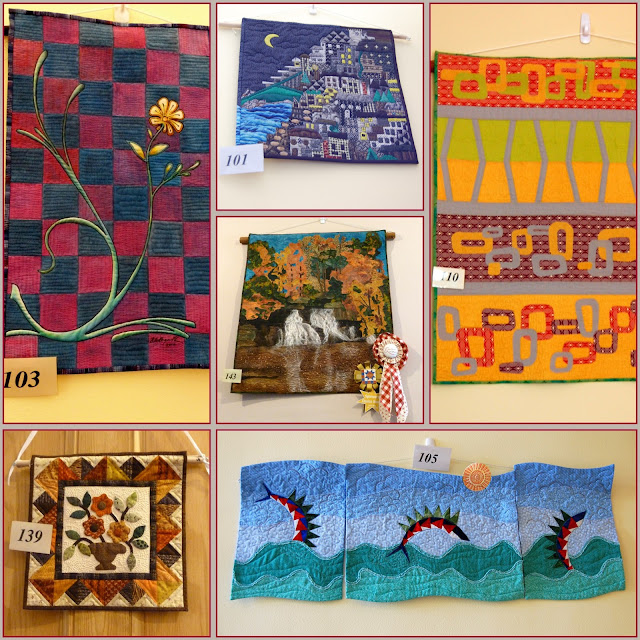 Some of the fun quilts below would look just right in a child's room. 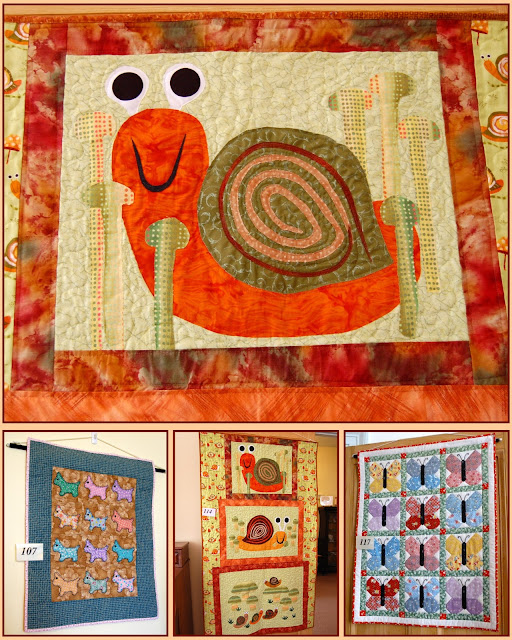 We entered "Irvine's Bedroom" and even the toy bed on the floor was covered with a miniature quilt. 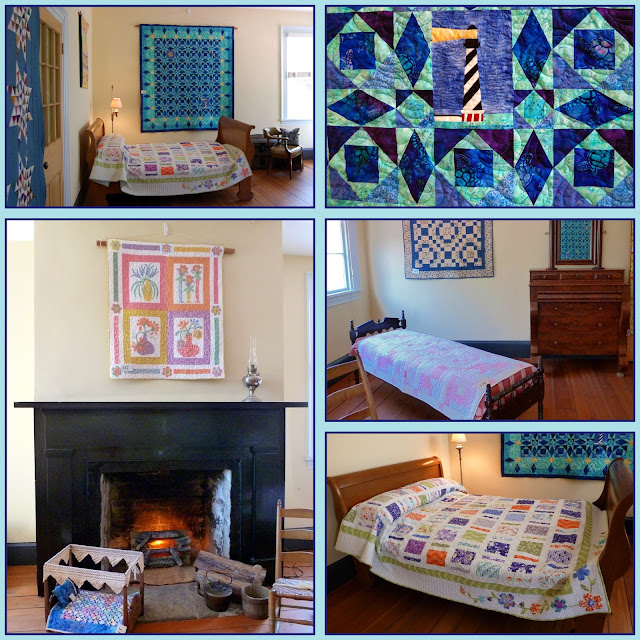 On a side wall was Meg Latimer's "Sixteen Stars" - a machine quilted piece from an antique design (shown on the bottom left side below.)  Quilt #113 was made by Gail Straub of Kennesaw, Ga., for the back of the couch of her neighbors as a 50th wedding anniversary present - but they have it hanging on the wall for all to see. 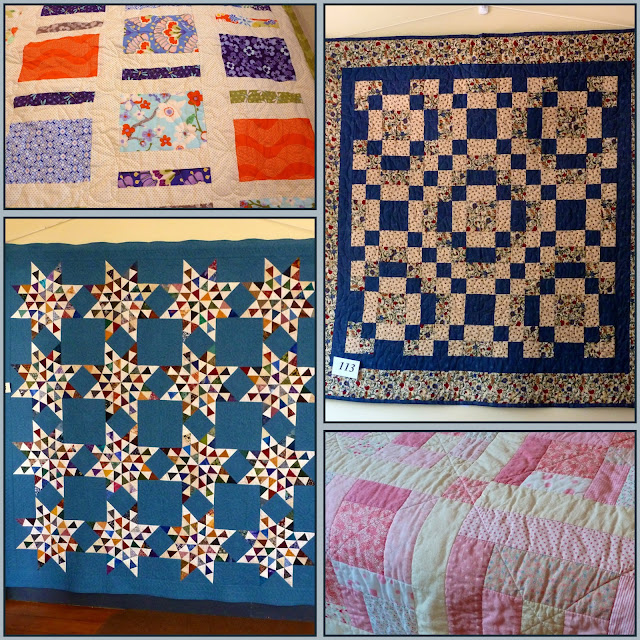 The "Sewing Room" contained quilts with some spool designs.  They were so bright - on a sunny day one would have to wear sunglasses to have a closer look... 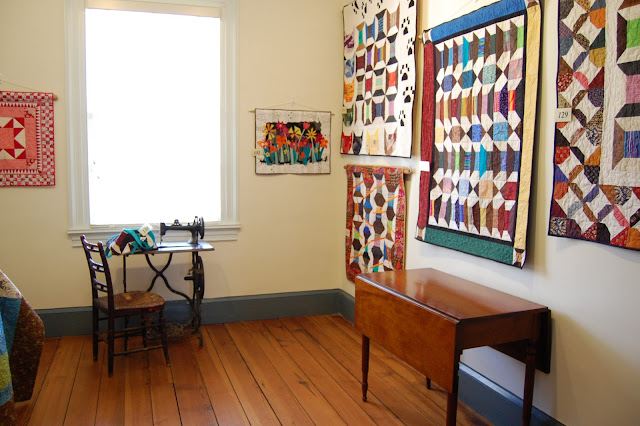 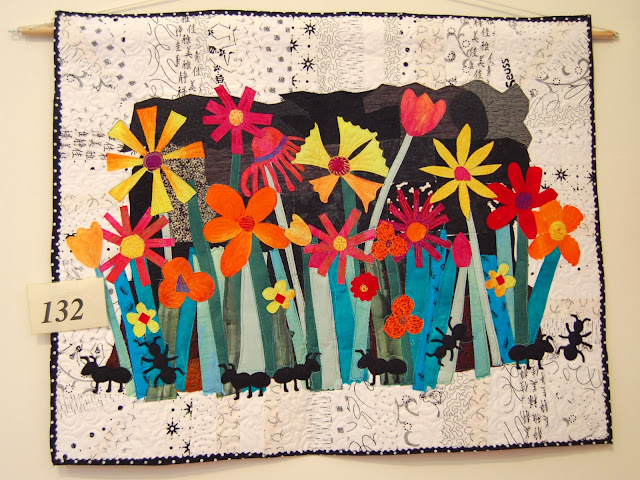 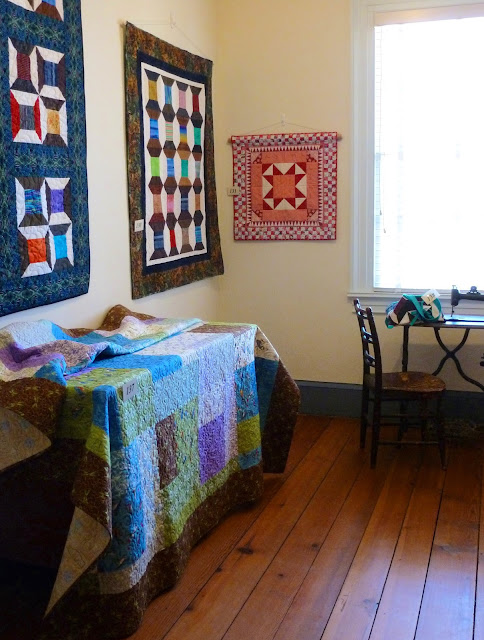 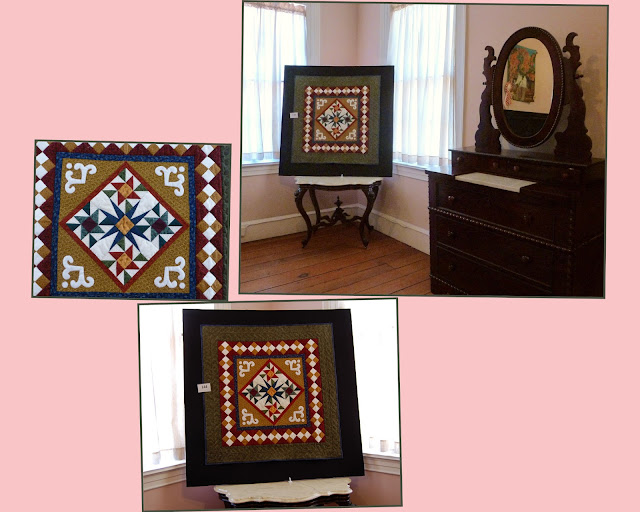 I looked at the above quilt for a while, but there were more quilts on another wall to admire. (Don't forget to click on collage to see better.) 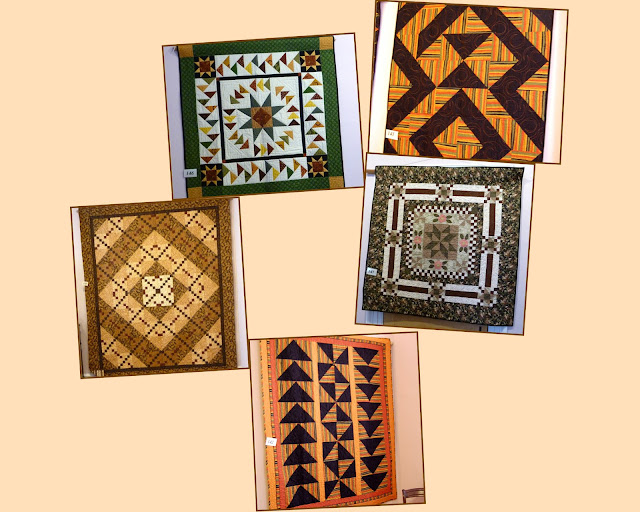 In this room there were also information panels explaining the building of Bulloch Hall and biography of its owners. 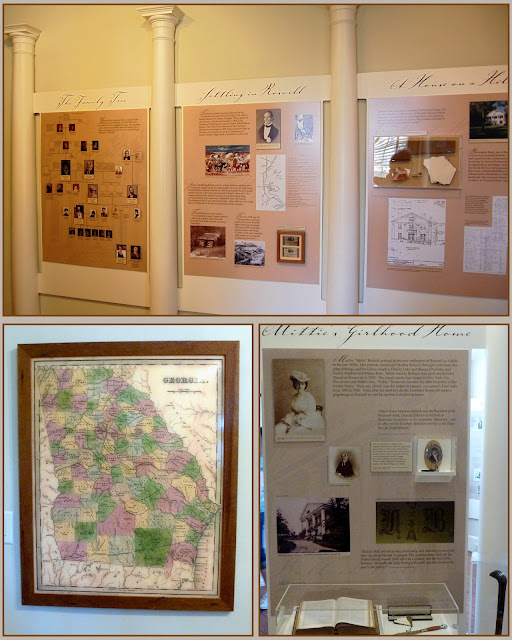 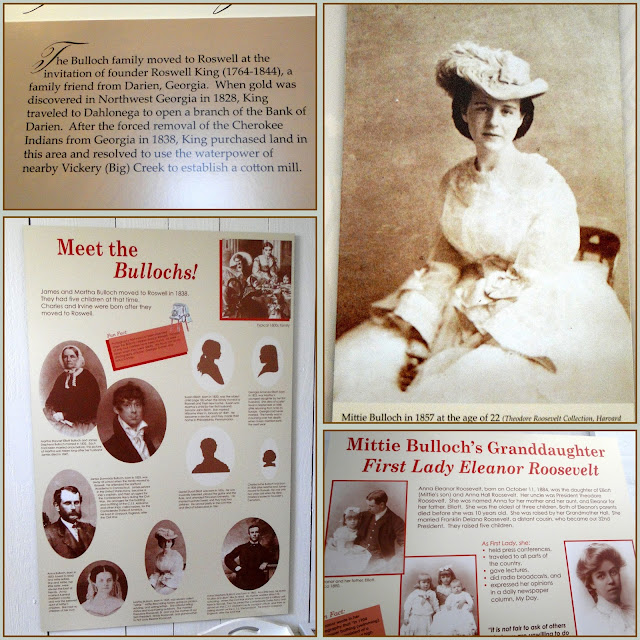 Miss Martha (nicknamed Mittie) Bulloch (1835-1884) married Theodore Roosevelt, Sr. on December 22, 1853 (there is a re-enactment of the wedding at Bulloch Hall every December.)  They had four children: Anna, Theodore who became the 26th President of the United States between 1901 to 1909, Elliott - who had a daughter Eleanor who became first lady when she married her cousin Franklin D. Roosevelt, and Corinne.  Unfortunately Mittie died of thyphoid fever on February 14, 1884 when she was 48 years old.  Her daughter-in-law, Alice Lee Roosevelt, the wife of Theodore, died on the same day in the same house of Bright's Disease, two days after giving birth to a daughter. 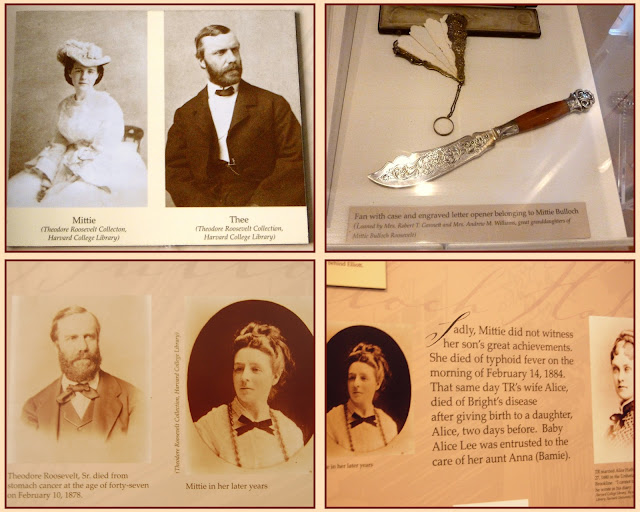 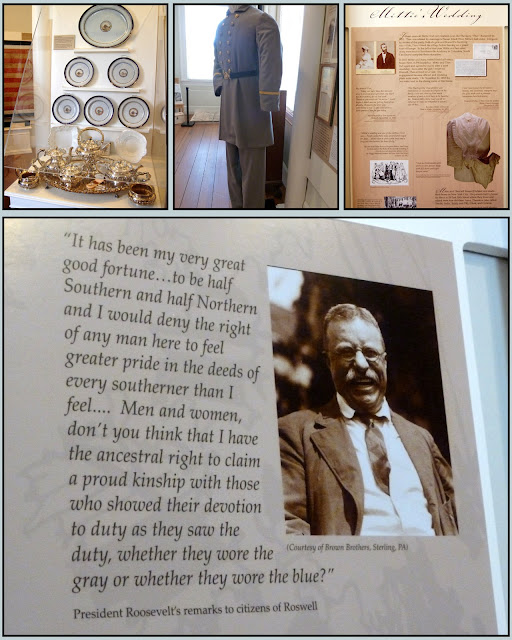 A half brother of Mittie Bulloch, James Dunwoody Bulloch (1823-1901) was the chief foreign agent in Great Britain for the Confederate States of America during the American Civil War and was based in Liverpool, England.  There are many tall information panels explaining his service. 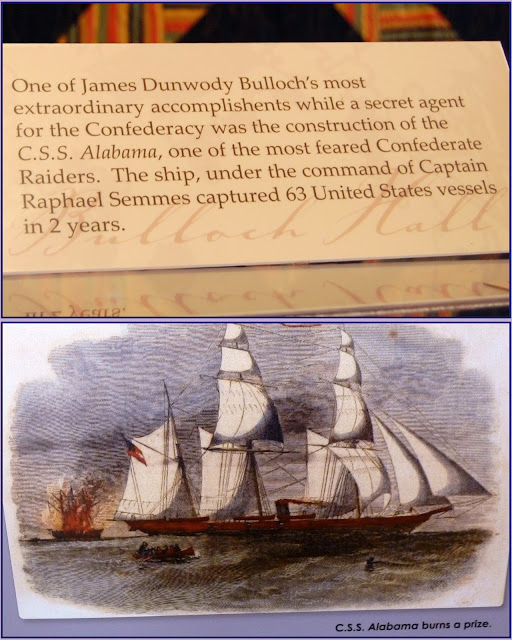 James Bulloch later wrote a book at the insistence of his nephew Theodore Roosevelt.  It was a 2 volumes set entitled "The Secret Service of the Confederate States in Europe." 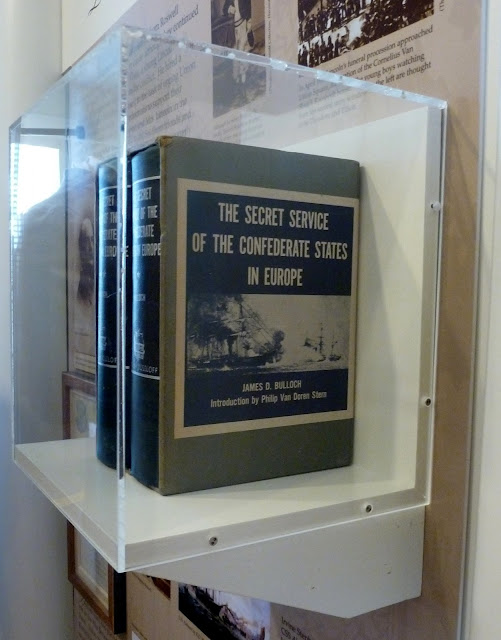 James Bulloch trained his nephew Theodore on the operation of wind-powered ships and naval warfare.  James died in 1901 in Liverpool.  On his headstone in Liverpool's Toxteth Cemetery was inscribed "An American by birth, an Englishman by choice." 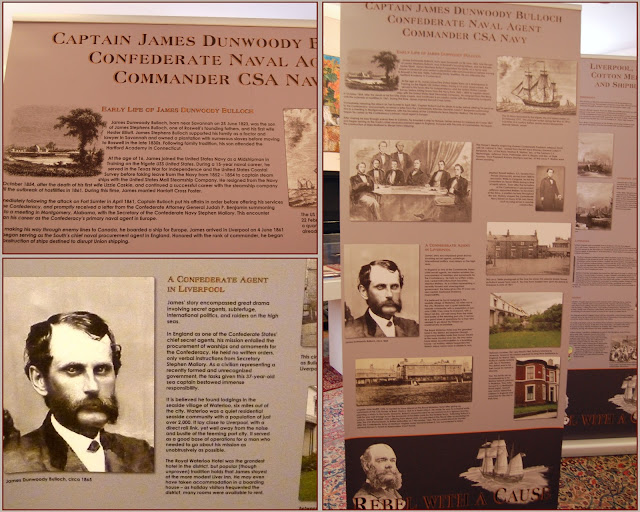 There was one more quilt in the room - a memory quilt.  It is called "Enjoy Life!" by Elisa Woods of Atlanta.  She says "This bookshelf quilt represents a 40th birthday gift for my brother Mervell Woods.  Growing up he felt the family did not take enough photo of him.  Now he has been immortalized in fabric. In 2009 he suffered a heart attack at 47.  Our family misses him dearly." 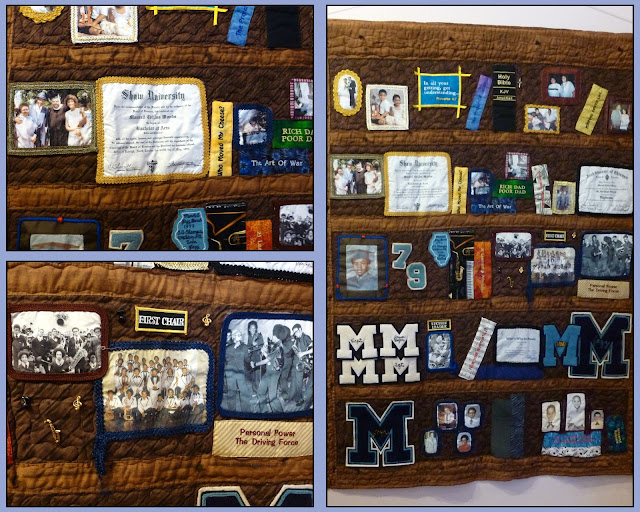 The last room we visited on the second floor was Mittie's Bedroom. 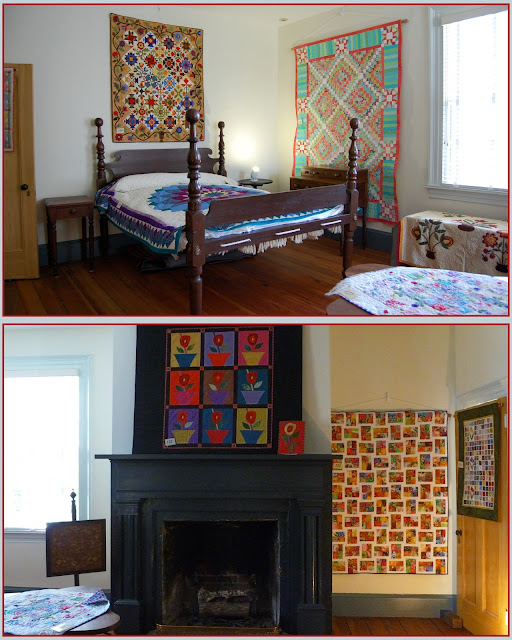 I slowly walked around the room, reading the information on each quilt. 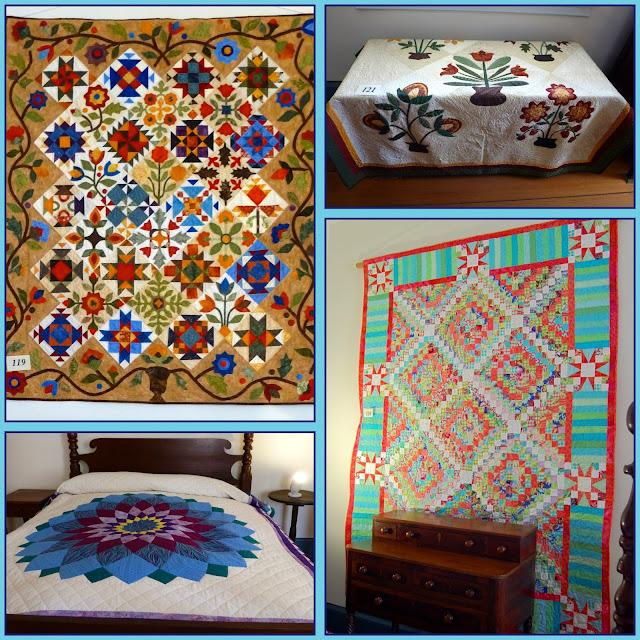 The quilts near the chimney were so colorful with vivid colors and many flowers.  Quilt #123 by Betty Duff of Milford, Michigan, was made to remind her of the rich colors of her native South Florida.  Quilt #124 by Linda Johnson of Sharpsburg, Ga., was started in 2007 and finished in 2012. 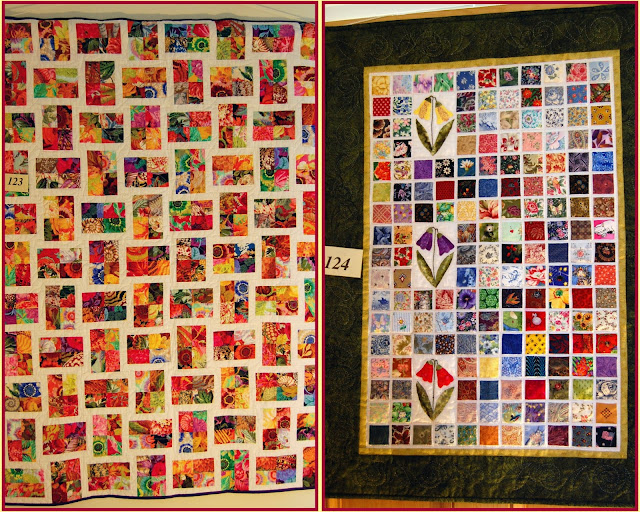 I'll end up the tour of Bulloch Hall second floor with this luminous quilt below.  It was quilted by Helga Diggelmann of Johns Creek, Ga., and is called "Roses are Red" - they definitely are. 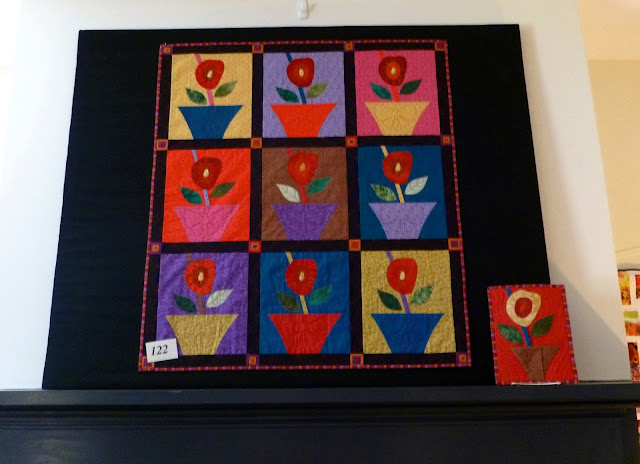 We still have the attic to explore.  When we came to Bulloch Hall at Christmas time the attic was not opened so it will be interesting to take a look at it ... in my next post. 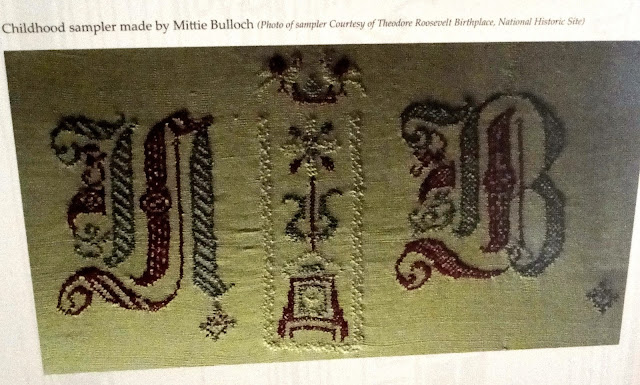 If this is not art, what is???? So many different and fantastique creations! Love it!

(we're actually on a long roadtrip to Spain right now, so not so much time to visit blogs, but I had to come here and have a look :-))))

Vagabonde, There are some real works of art among these quilts...but I'm afraid that I really favor the antique quilts and those that are made with antique designs. As for the history of the Bulloch House and the family, it's really interesting and this historic home is now on my list of places to visit! Thanks and Take Care, Big Daddy Dave

What a beautiful afternoon that must have been. I like most of them - not so fond of the really dark fabrics. My favourite is the one in the third photo, hanging in the stairwell. When I click on the photo I can see that it is #100. What a beauty!
The facts about the family connections were very interesting and must have added to your experience of visiting the hall.

But despite all the beautiful and fascinating quilts it is the letter opener I would sell my soul for!!

OOO, aren't the quilts just magnificent !!
When my mom was alive, we went to several local quilt shows and enjoyed them so much. I don't go now since she's not with me...I think I enjoyed them so much because I knew how much SHE loved going. She was an artist in her quilting. Such beautiful work.
Thanks for sharing these lovely photos...
and thanks for coming by to see me. Hope you will come again soon.
xo bj

I absolutely adore quilts, the more creative the better. Here, there are many quilters, and many shops to cater to all their needs; however, I have no patience! So, I frequent antique shops and purchase those quilts that are affordable and fit my aesthetics.

Fantastic quilts, all. But I especially love "Ants" and the beautiful one over Mittie's bed (no. 119). So many of them are mesmerizing. Thank you for the wonderful tour of quilts and an abundance of information. :-)

Vagabonde, I've enjoyed this second chapter of the magnificent quilt exhibit. And now you tell us that there is more to come...the attic. Who could possibly resist treasures to be found in an attic.

Have any of the quilts in this exhibit encouraged you to start quilting? I admit that I admire quilting and have fond memories of one that covered my childhood bed (hoping that my mom still has that quilt!) but have never felt the urge do any quilting myself.

I once did lots of silk screen printing, and I think that there is something that links these two mediums...or is it media?

Simply incredible quilts, historic ones as well as contemporary ones!
Fun memories of the time I was visiting quilt shops in AZ and CA. Inspiration is everywhere.

Oh, how beautiful. So much work. So much artistry.
I loved this tour, and am really looking forward to the tour of the attic as well.
Your posts are always beautiful and informative - and this is certainly no exception. Thank you. Lots.

So very many gorgeous and original quilts....! One more beautiful than the next---though in truth, they are ALL beautiful, in their own way.....It is like a feast of very rich and exotic food!
And the Bullock Fmily History is fascinating! Another wonderful post, my dear Vagabonde.....! And next...The Attic!! WOW!

I love number 139 and 119!
Beautiful and great color composition!
Thank you for telling such interesting history of Bulloch family!

Dear Vagabonde, thank you for sharing all this creativity and beauty with us. My favorites among all these wondrous quilts were #119 and #124.

Here's the URL for another blog I follow. This posting always displays some truly marvelous quilts by gifted quilt makers: http://mollybawnchronicles.blogspot.com/2013/03/a-crock-of-gold-en-quilts-for-day-thats.html

I think that this is most definitely a form of art. I love the ones above the fireplaces!!

These are some gorgeous quilts! I have always admired this beautiful art, but I have never tried it. I don't like sewing, I am not good at it and I probably won't have the patience for it. But I admire this art and call two beautiful Amish made quilts my own. My daughter who is so much savvier with a needle and a sewing machine than I am wants to make a quilt one day.

I don't think I've ever seen so many quilts in my life!

I have been to amazing quilt shows. I have never seen one so dazzling as this. Your photos are stunning and so are the quilts -- every single one of them. Thanks for sharing these.

I adore President Roosevelt's remarks to the citizens of Roswell. The history, as always, is fascinating.

Mittie Bulloch is so beautiful at age 22!

It would be impossible for me to pick out a favorite quilt but #132 with the ants is particularly charming and an easy size to find a spot in my house :)

I also do like 119. So I guess I do have a few favorites afterall I wonder what size bed most are made for.. Kings are so large. The design of 124 is very interesting

... and the childhood sampler of Mittie Bulloch stole my heart. So intricate!

I could spend all day at your blog - but I've gotta get outside on this nice day... I'll be back.

Oh! More quilts. How lovely. The biographical information and photos of Roosevelt remind me off Hall Place near me where King Henry VIII visited.