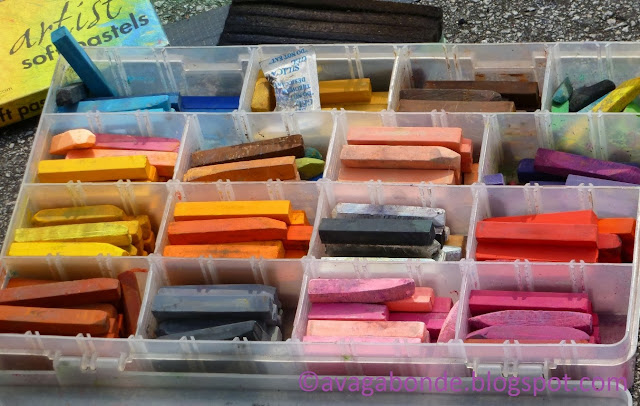 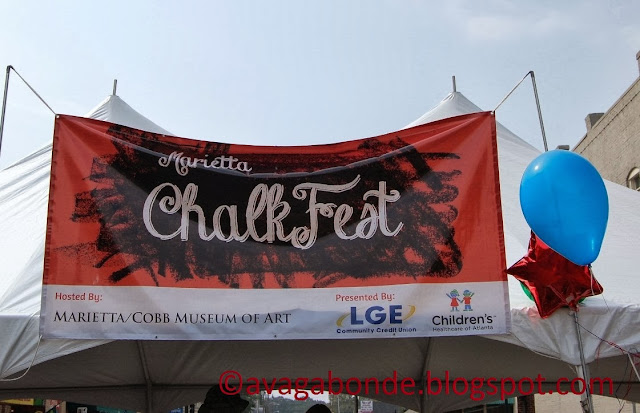 This chalk art festival was hosted by the Cobb-Marietta Museum of Art.  Twenty professional chalk artists from around the country came to compete in their allocated 10 square feet each.  Local children and adults could also participate and create their chalk arts in a juried competition in the Youth or Adult division.  (Click on collage twice to enlarge.) 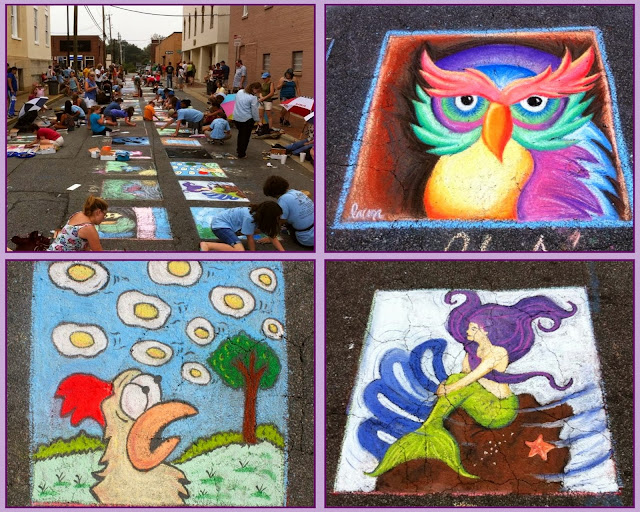 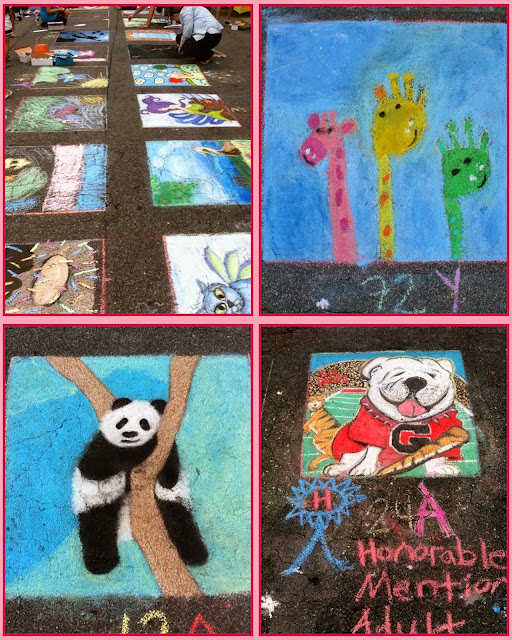 This chalk art festival was just a block off the historic Marietta square, on the street near the Cobb-Marietta Museum of Art and on another street around the corner. 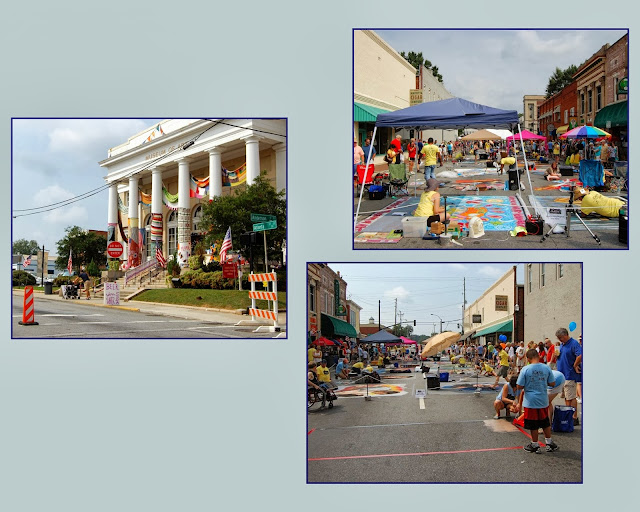 I enjoyed watching the professional artists drawing their pictures.  There was a large variety of subjects such as renditions of photographs of famous people like Abraham Lincoln and Ray Charles (Georgia born singer, 1930-2004.) 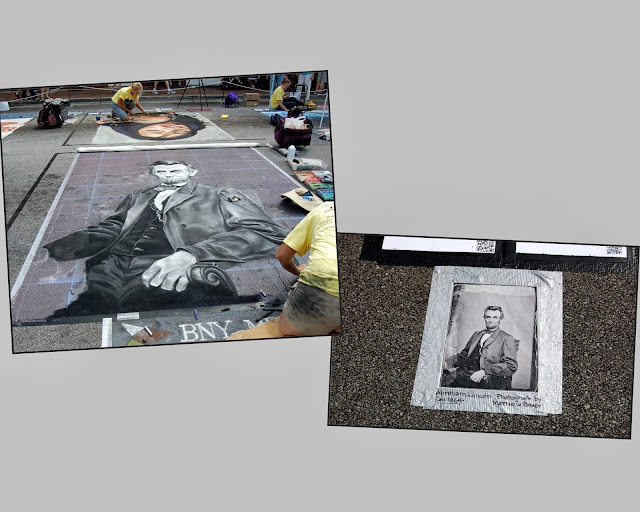 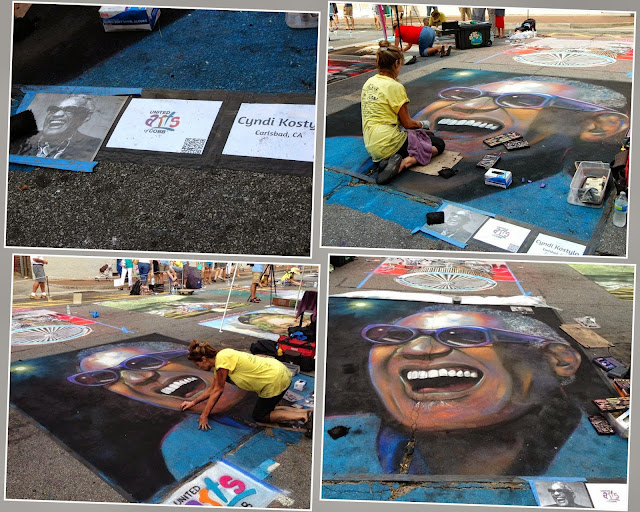 It was not easy taking pictures because I was too close to the ground.  It would have been better if I could have taken them from some height.  I took the photos from different angles. 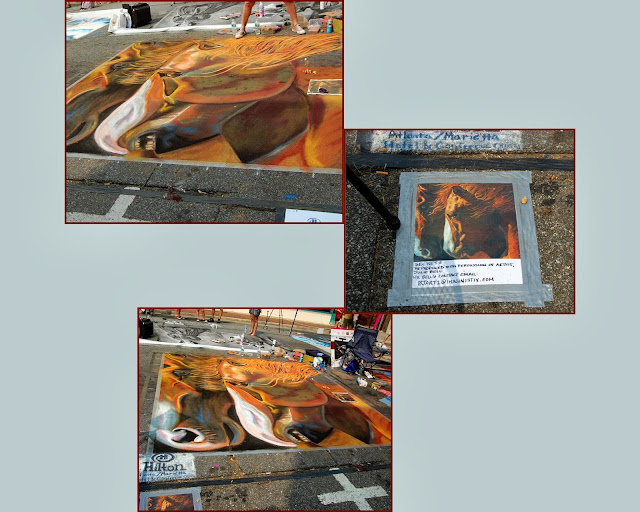 A photographer went down on his knee to get closer to the subject - so I did too, but ended taking the artist's leg! 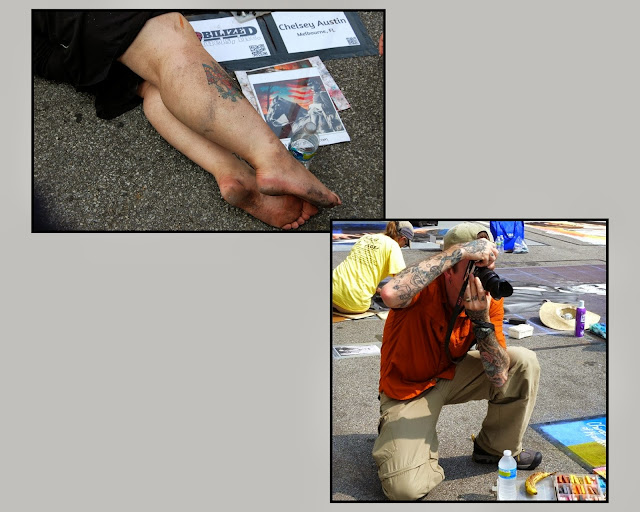 But I did take a picture of her drawing - a soldier on a horse. 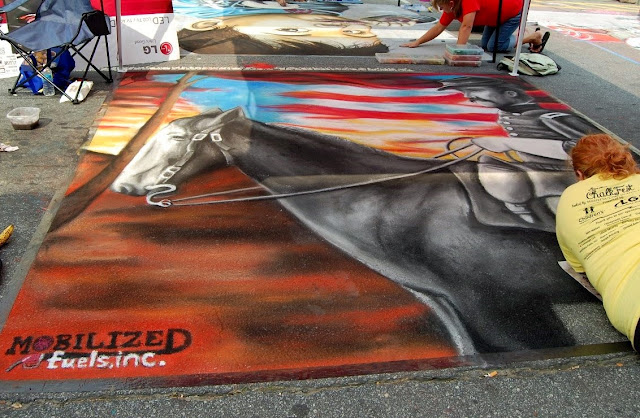 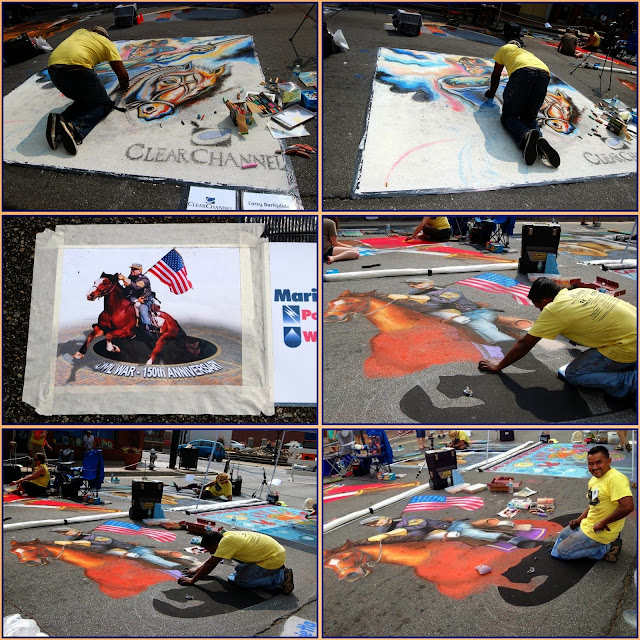 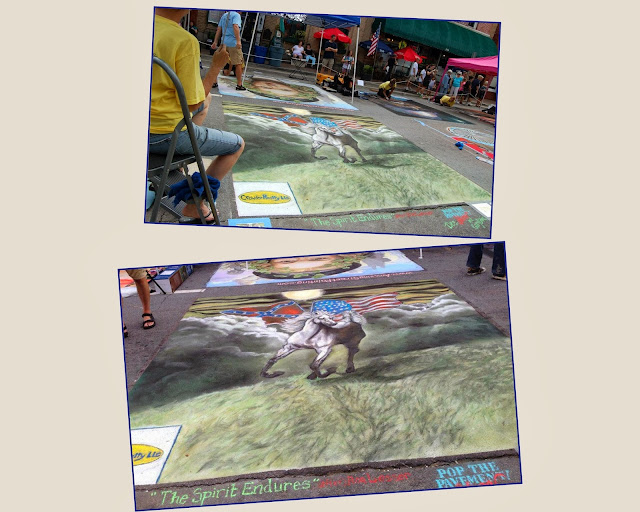 and soldiers and spies. 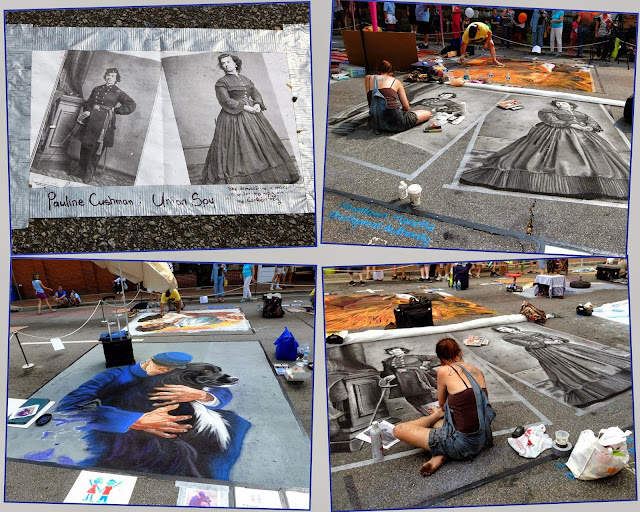 There were other animals, 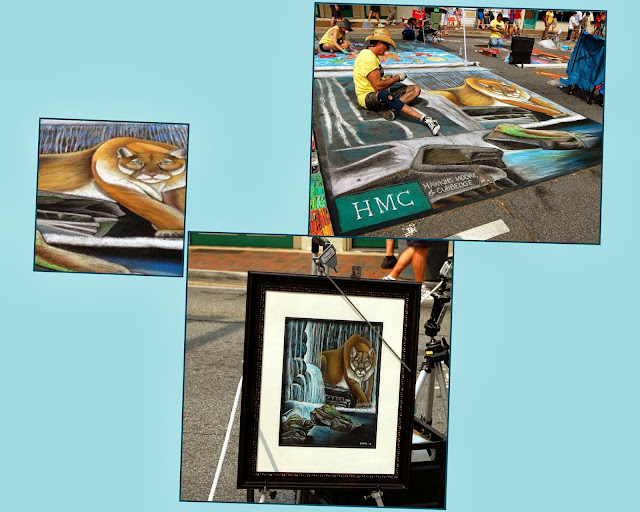 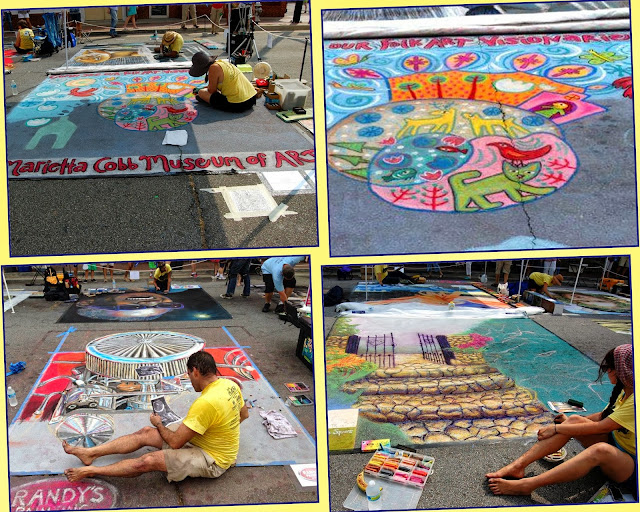 and faces of people and actors. 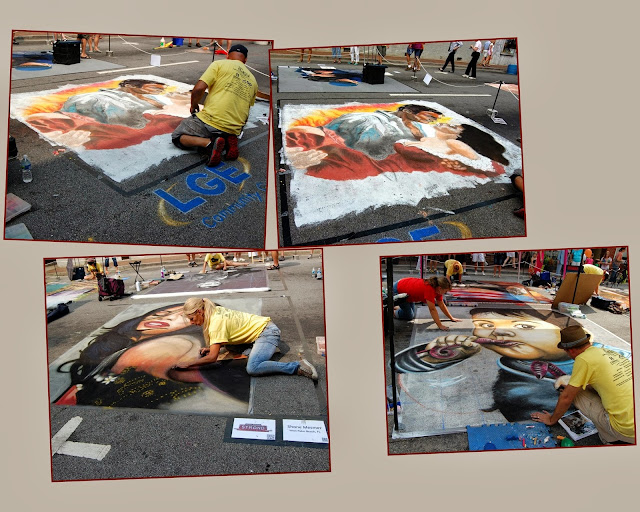 The winner was Jennifer Chaporro of West Palm Beach, Florida, with her depiction of Ivy, a portrait by Will Wilson (Jennifer was sponsored by Moore Colson.) 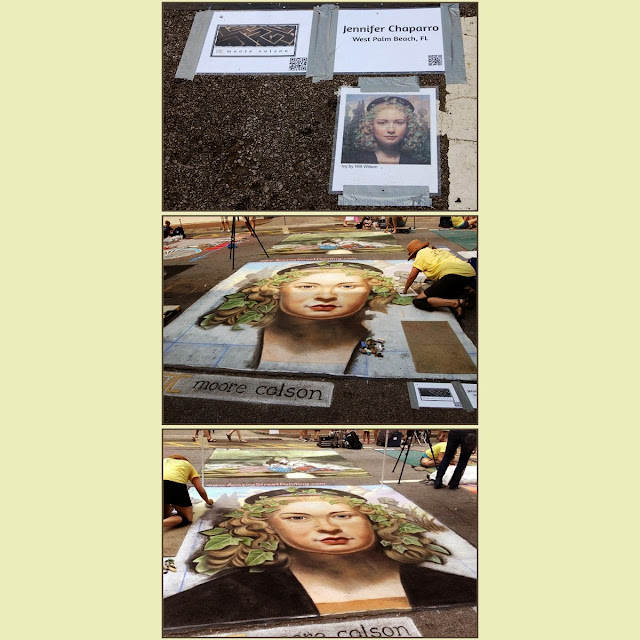 This is only the third annual Chalkfest festival in Marietta, Georgia, so it is modest compared to some other chalk art festivals such as the festival in Israel which drew 50,000 visitors.  Chalk art is not new - in Italy in the 1600s painters would draw images in chalk in front of churches and the public would throw coins if they liked the art - usually reproductions of paintings of the Madonna and Child.  These street painters became known as "Madonnari" and would make a living going around various towns holding festivals for religious holy days.  In Germany they were called Strassenmaler, and in England Screevers.  In 1982, an American artist, Kurt Wenner, who was furthering his art education in Italy, developed an innovative sidewalk style of drawing combining the century old technique of the Madonnari and knowledge from his classical training in architecture and perspective.  This is now called anamorphic, or 3D Street Painting, 3D Chalk Art or 3D Pavement Art.  Kurt Wenner and several artists including Julian Beever, Manfred Stader, and Edgar Muller are famous for creating 3D street art challenging the perceptions of the public walking by these masterpieces in chalk. (Don't forget to click on collage to enlarge and see better.) 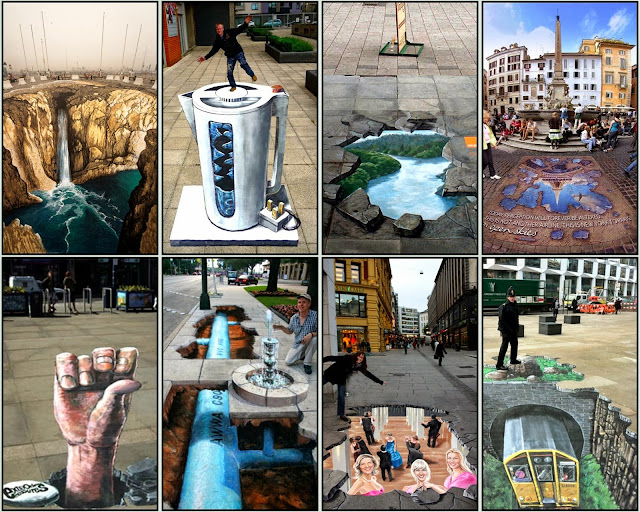 I don't know the authors of these photos as they were taken on street sidewalks where thousands of people can photograph them. 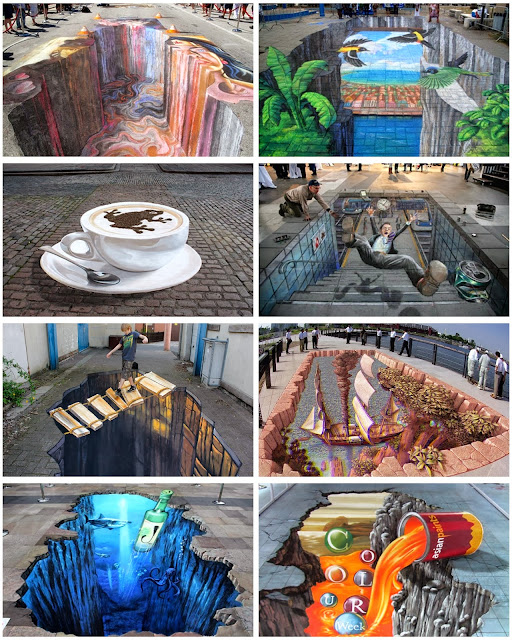 Some of these chalk drawings are also professionally done for advertising purposes or to bring attention to various causes.  These 3D drawings can only be seen from one viewpoint to get the full 3D effect; if you stand in another area of the drawing the image appears distorted.  As an example of this, below is a drawing made by British Julian Beever at the request of Live8 to support the pressure campaign on the G8 in Edinburgh, Scotland.  It is called Make Poverty History.  The top photo shows the drawing from the side, the "wrong" side and then below it, from the "right side." 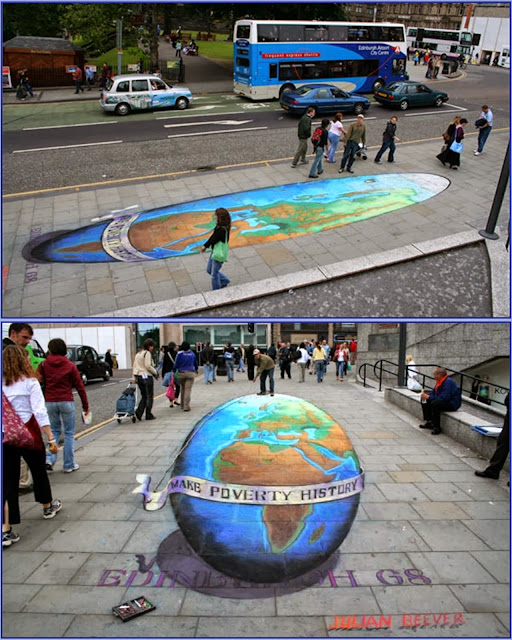 Ah, you would need to have so much space for a chalk festival. That's my first thought, living here in crowded London :)
What a lot of fun it looks, though!

So very very Beautiful and Creative....I have always been attracted to the Odd Perspective Chalk Drawings--they fascinate me as an artist. As always, your photographs share so very much of the experience with us...Really ALL quite Marvelous! And thanks so much, my dear Vagabonde.

Good morning -- I can't believe I am first to comment!

Chalk art is something I know a little about because of Greg's passion for it. I can't remember if you saw the first of the two Art Prize posts I did on The Marmelade Gypsy -- the first highlights Greg and his work on his giant Michigan-themed Faberge eggs. He's also done talks at Detroit Institute of Arts on the medium. It fascinates me because it is probably one of the most ephemeral -- even more than traditional ephemera! Gone in a rainstorm when it is outside. I so admire the artists you featured -- they are incredibly talented and deserve the showcase this festival provided.

These are impressive chalk art! Especially the 3D one, they're just amazing. Still can't figure out how that can be done. IMHO, Banksy's works pale in comparison.

Vagabonde, I can appreciate chalk art and I've seen some amazing pieces. Your photos are terrific...as is the artwork... My stepbrother used to participate in a lot of these exhibits/shows down in South Florida. I personally wouldn't want to put so much work into something that will not last. Take Care, Big Daddy Dave

Gorgeous. I am in awe at the beauty of these ephemeral art works - and love the trompe l'oiel works. Thank you.

What a nice post. I love chalkfest festivals. Seeing the artists in live, youngs and less youngs at work, hard work. It is so fun as a passerby, to be able to walk by, observe for a while, leave and be able to come back an hour later to see the progress.
Being able to stay till the end is even more enjoyable, I was never able to do that.

I am in awwww!! These chalk pieces of art are totally amazing! The hours that go into creating them! Wow!! The last few are so cool! It looks like you are going to fall right into them! Have a great weekend ;o) Thanks for sharing all of this ;o)

What a great exhibition to see!

What a beautiful, colourful post! I love chalk art but am always disturbed by its temporary nature! I like the 3D ones the best but all of them are good. And yes, they are very difficult to photograph!

Wow! I liked most of them! I think I couldn't paint anything because of it's difficult to see all entire picture, going down on knees. Thank for sharing, Vagabond!

Thank you ! This was fascinating. I just hope it didn't rain anytime soon after the chalk art event! That would be a sad sight.

Do they survive rain I wonder?
Such a pity that one can't get the full impact unless one was suspended somehow.

These are amazing chalk art!
Great photo reportage!
You always do wonderful posts.
Thanks for sharing.

Dear Vagabonde, thank you for introducing me to a whole new medium. I'd seen the 3-D chalk drawings in e-mails sent by friends, but somehow the fact that they were chalk never took hold in my mind.

The ones you photographed in Marietta, Georgia, amaze me with the detailing. I liked the winner, but then I liked all the ones you displayed for us--Lincoln and the Civil War depictions and the puma and the horses.

But I have to say that my favorite of all you showed us was the one by a child who did the three giraffes. That had such gaiety to it that it warmed my heart.
And the truth is that my favorite animals are cats, giraffes, horses, and wolves! Peace.