Smith-Gilbert Gardens in winter ... and more 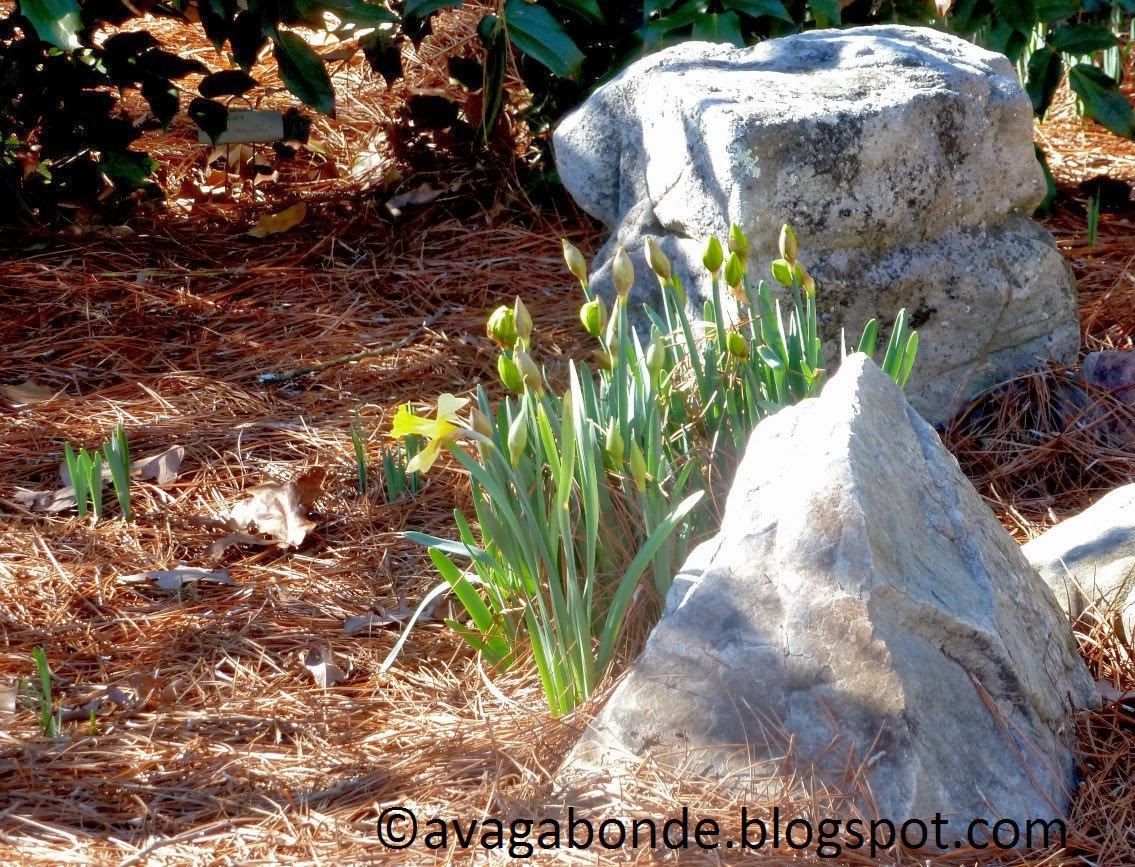 Three weeks or so ago when it was snowing we went to the Smith-Gilbert Gardens which are near our home.  I have written about these gardens several times, about their history, and shown them in summer, on August 21, 2011, in A Secret Garden in Cobb County, Georgia, part 1, followed by part 2, then by part 3.  Then in a post showing them in the fall, on November 23, 2011 in Return to the Smith-Gilbert Gardens, and then again last year on September 19,2013 in End of Summer in the Smith-Gilbert Gardens.  On my last visit three weeks ago the snow was melting fast but I did get some snowy pictures.  I returned to the gardens last Friday, February 21, 2014, to take some pictures showing the gardens now, when the weather is back to normal and spring flowers are starting to show. 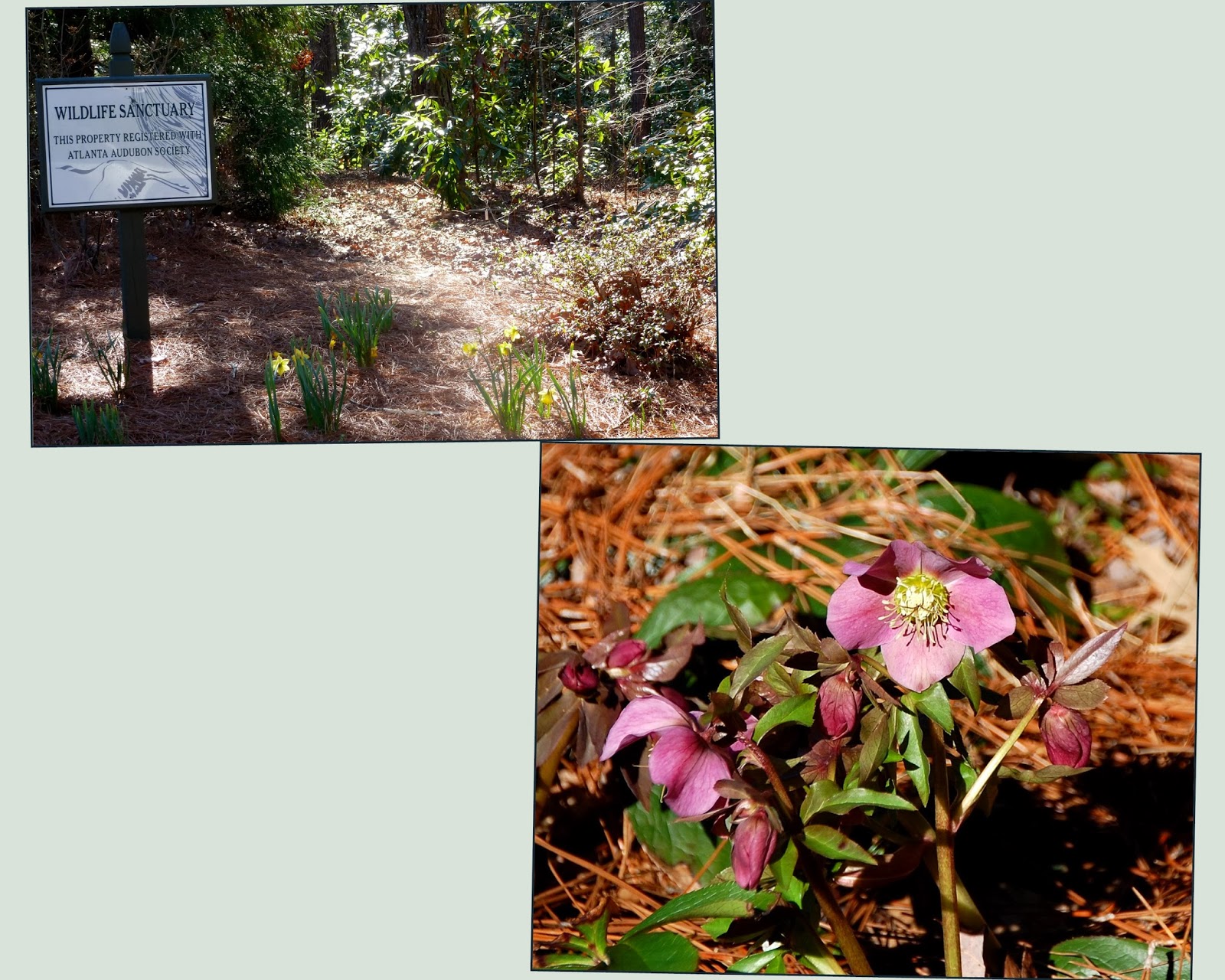 The first and second days it snowed we could not get to the gardens because the roads were icy and the gardens were closed.  The third day it was sunny and the snow was gone from the trees but there was still plenty on the paths.  (Click on collage twice to enlarge.) 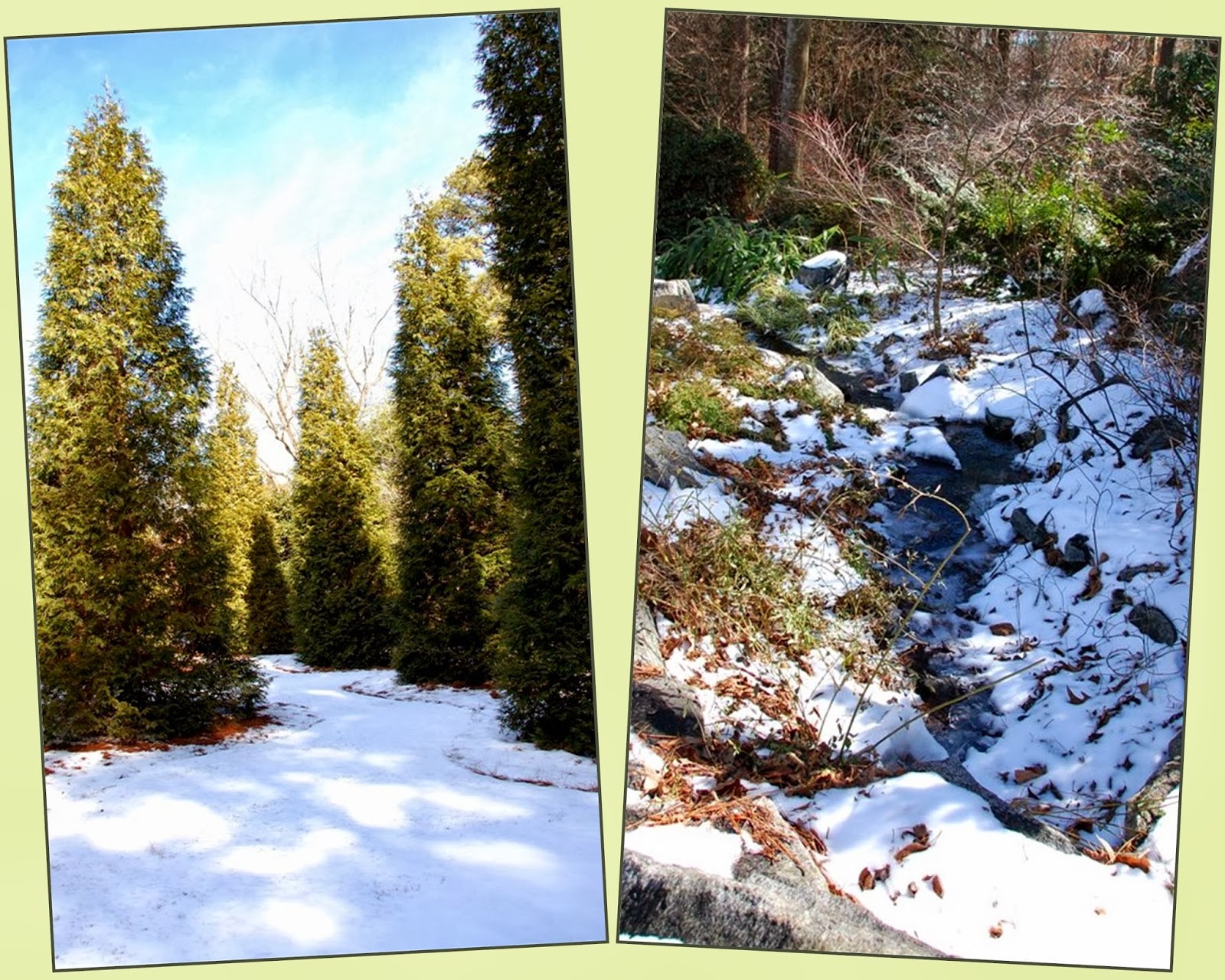 We followed the little stream to the waterfall. 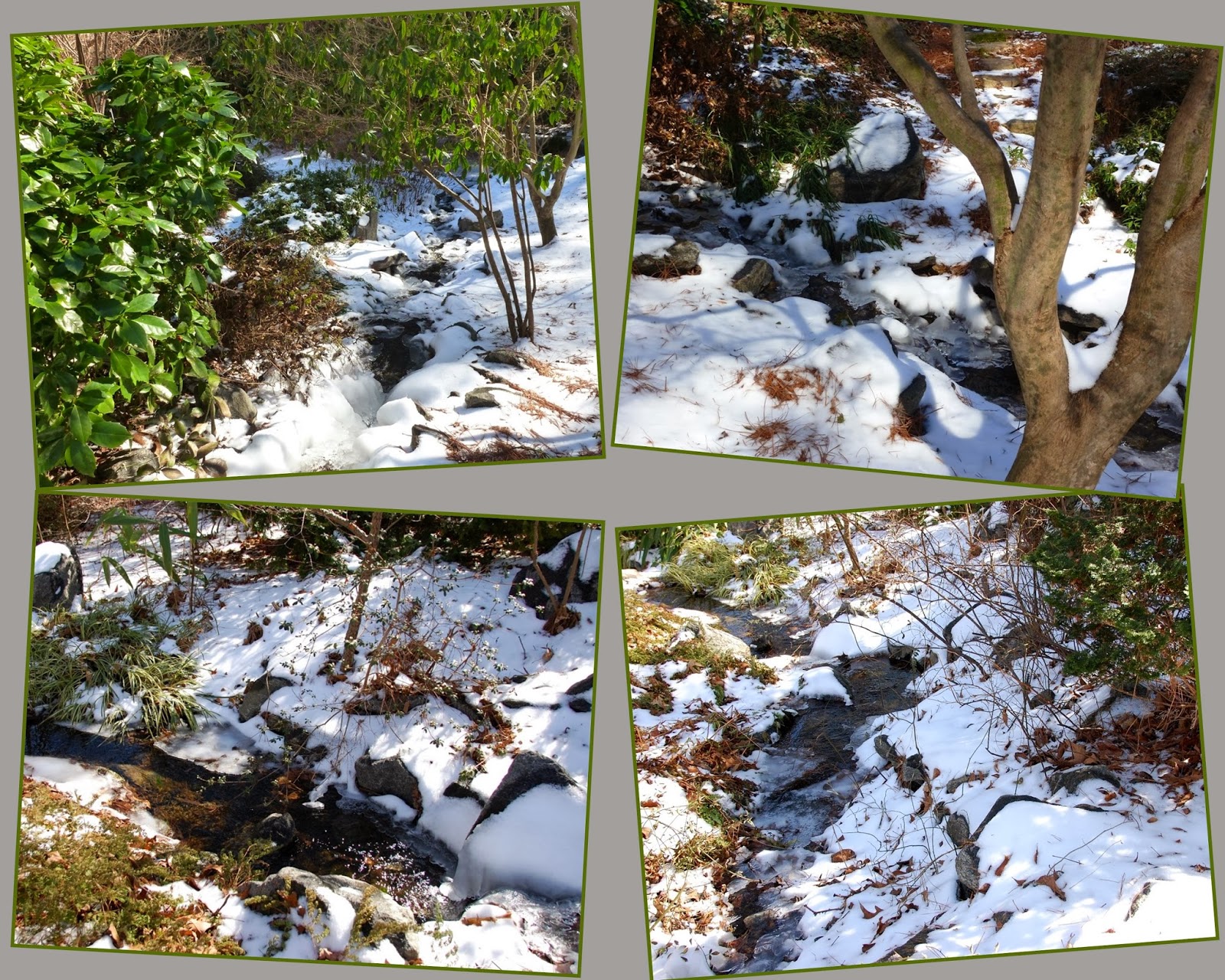 The waterfall was charming as usual, with beautiful formations of icicles.  I took so many photographs of it - it is difficult to choose just a couple, so I'll show several. 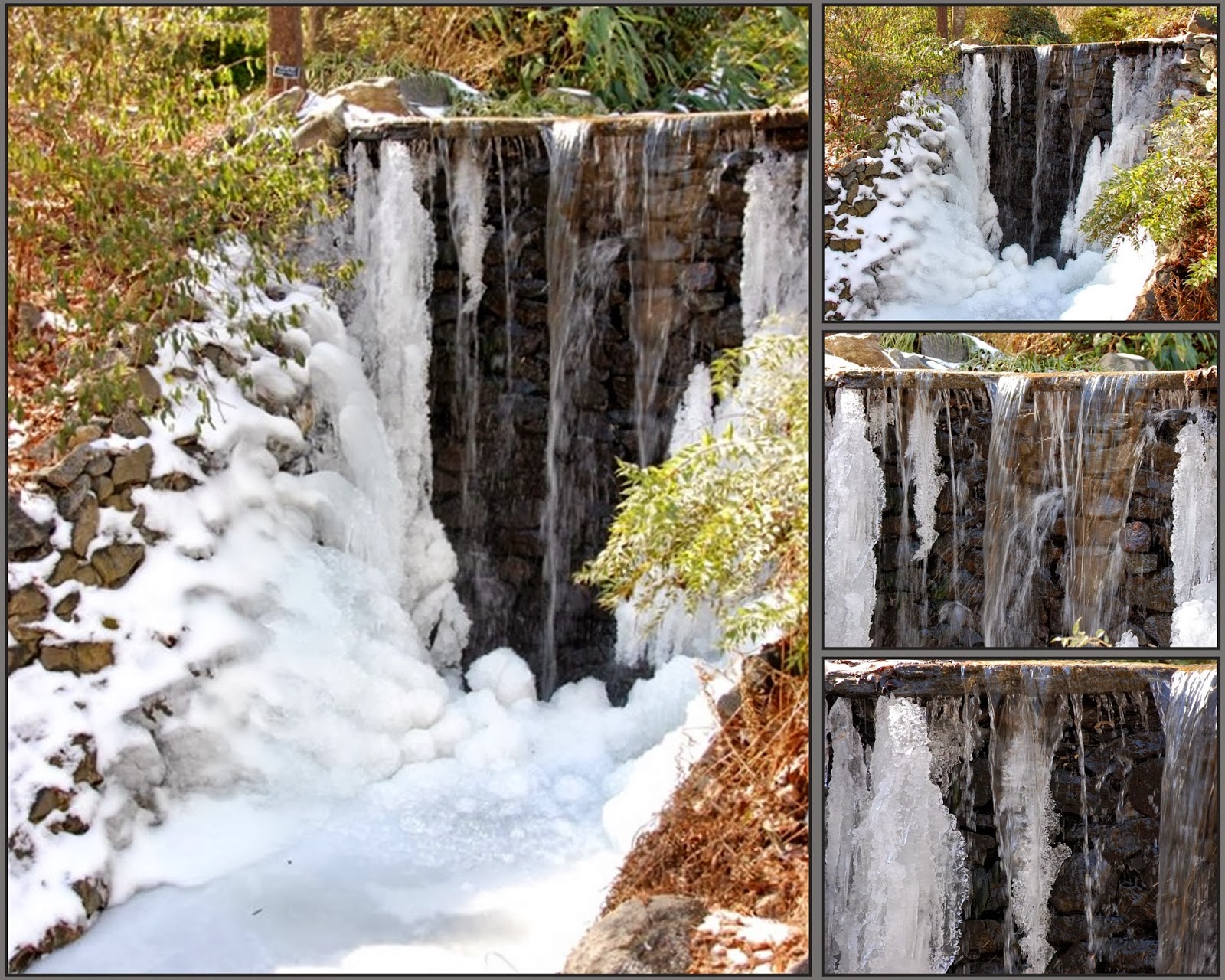 My husband followed some critter's tracks that lead him to the pond.  There he decided to sit on a bench and wait for me while I took all my pictures. 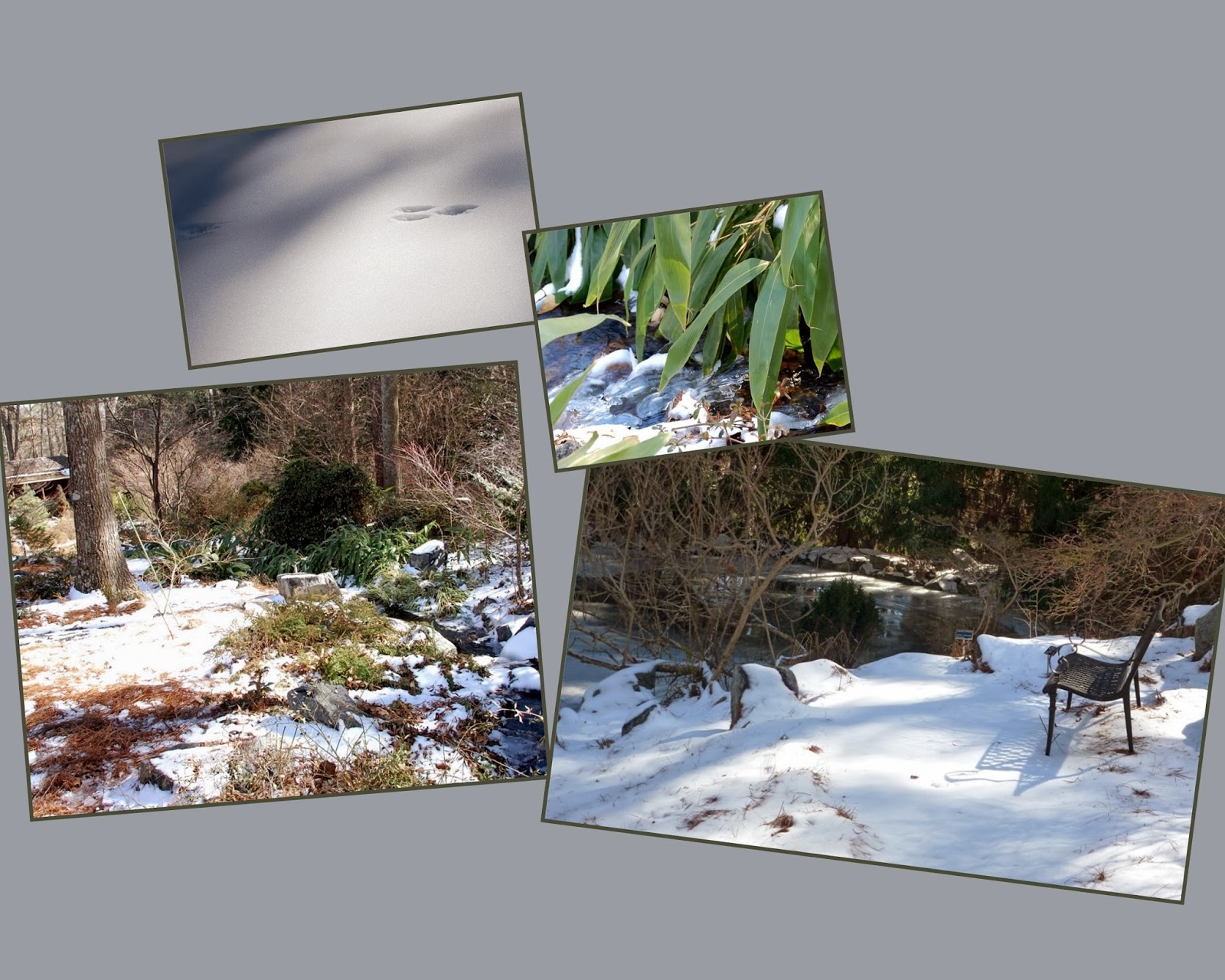 Ice had formed along the small stream. 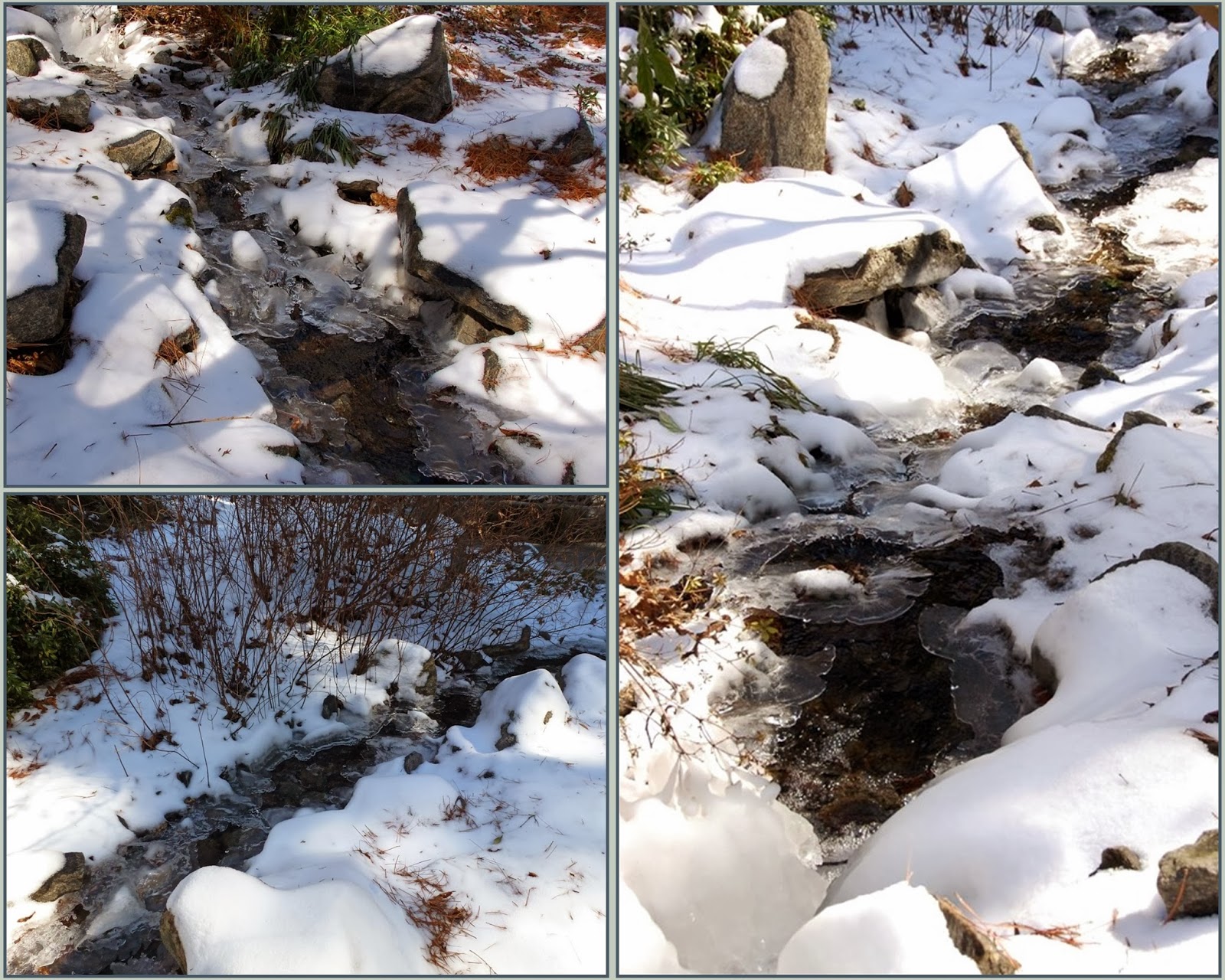 As with the waterfall I could not help taking photographs of all the ice formations - the appealing designs nature had created. 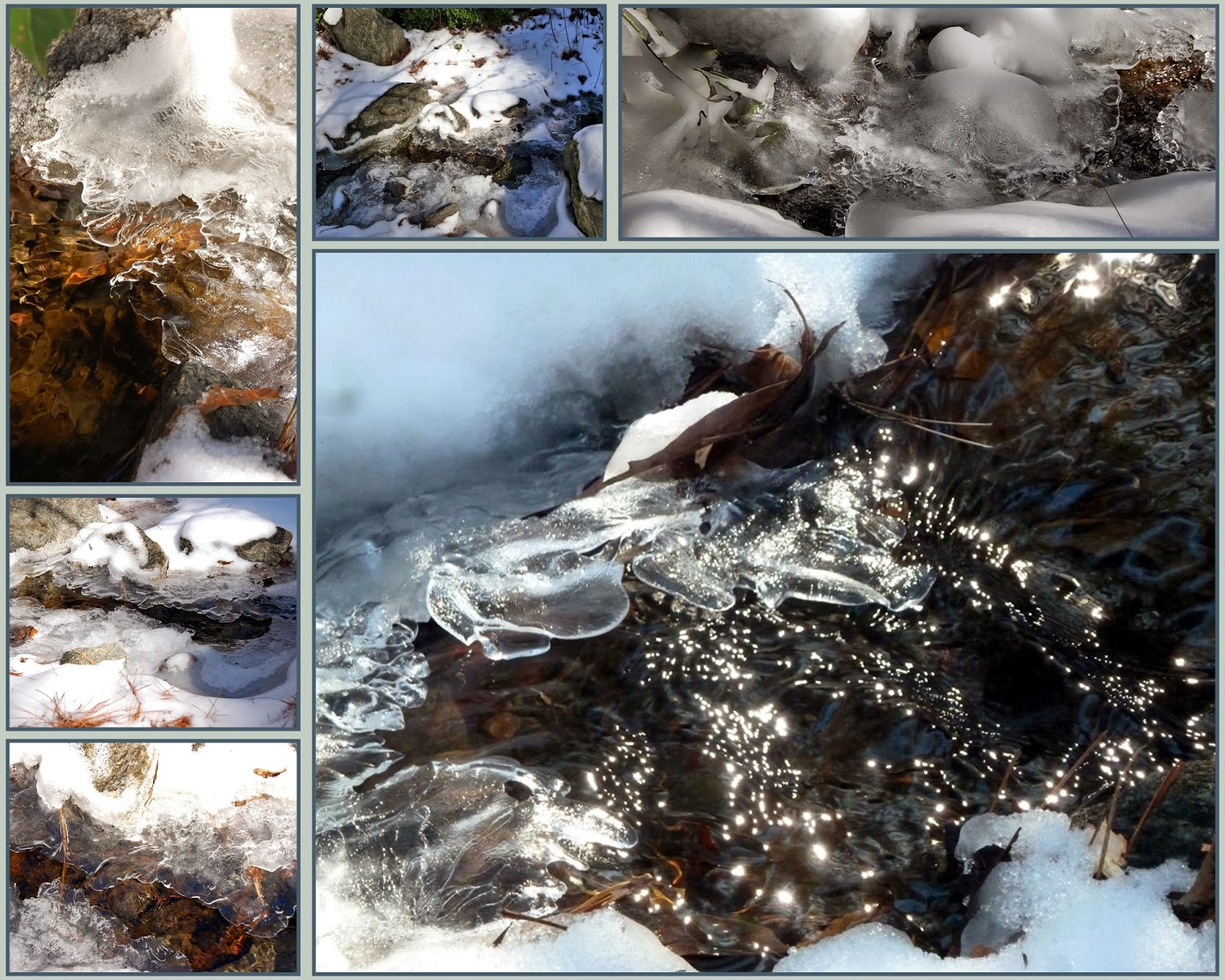 The movement of the water had carved out some unique ice shapes and the light reflecting in the water made them seem alive. 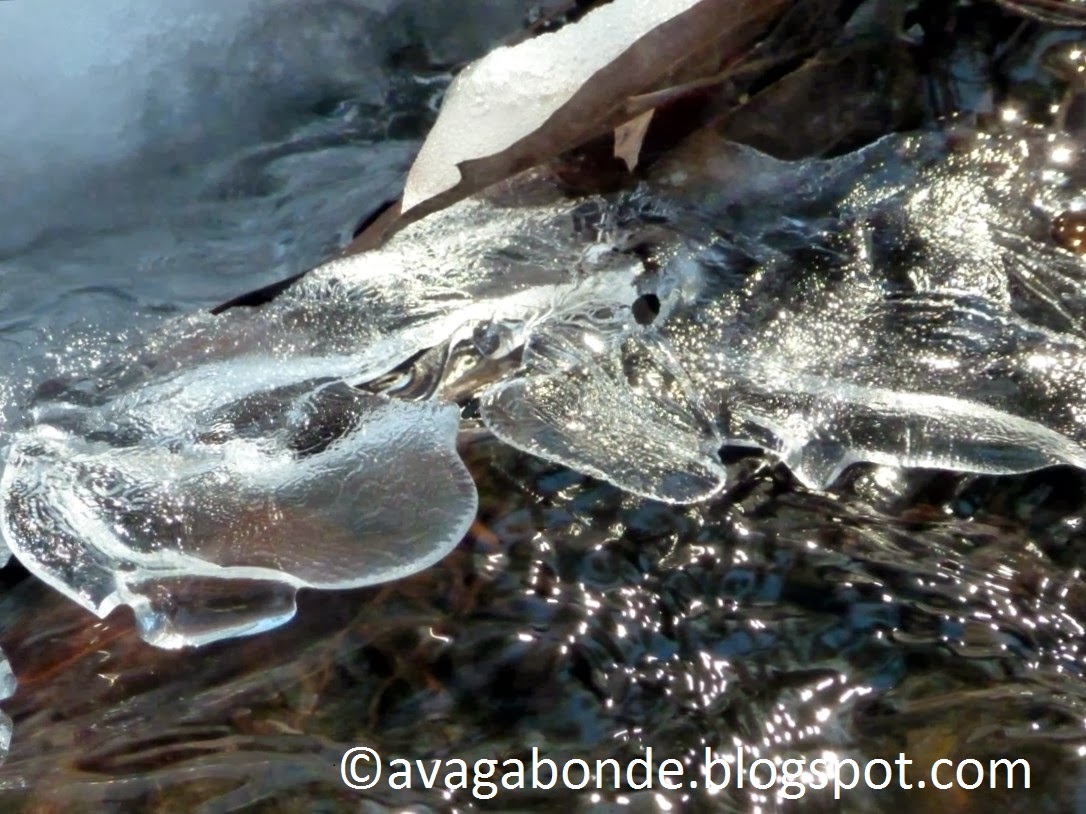 The water forcing its path through the ice caused lovely tiny bubbles. 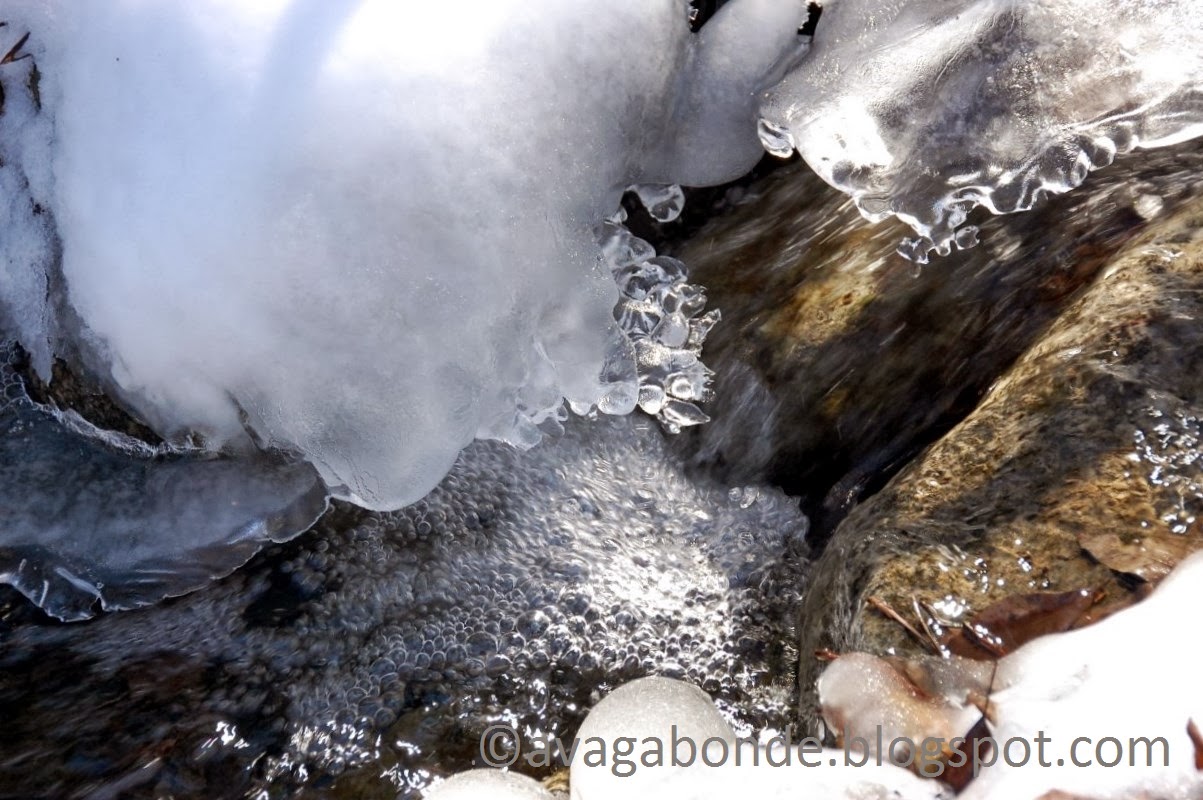 When I went back to the gardens last Friday, all this winter vista was gone.  The sky was blue, it was close to 70 degree F (21 C) and did not feel like winter at all.  I took a couple of pictures with my cell phone. 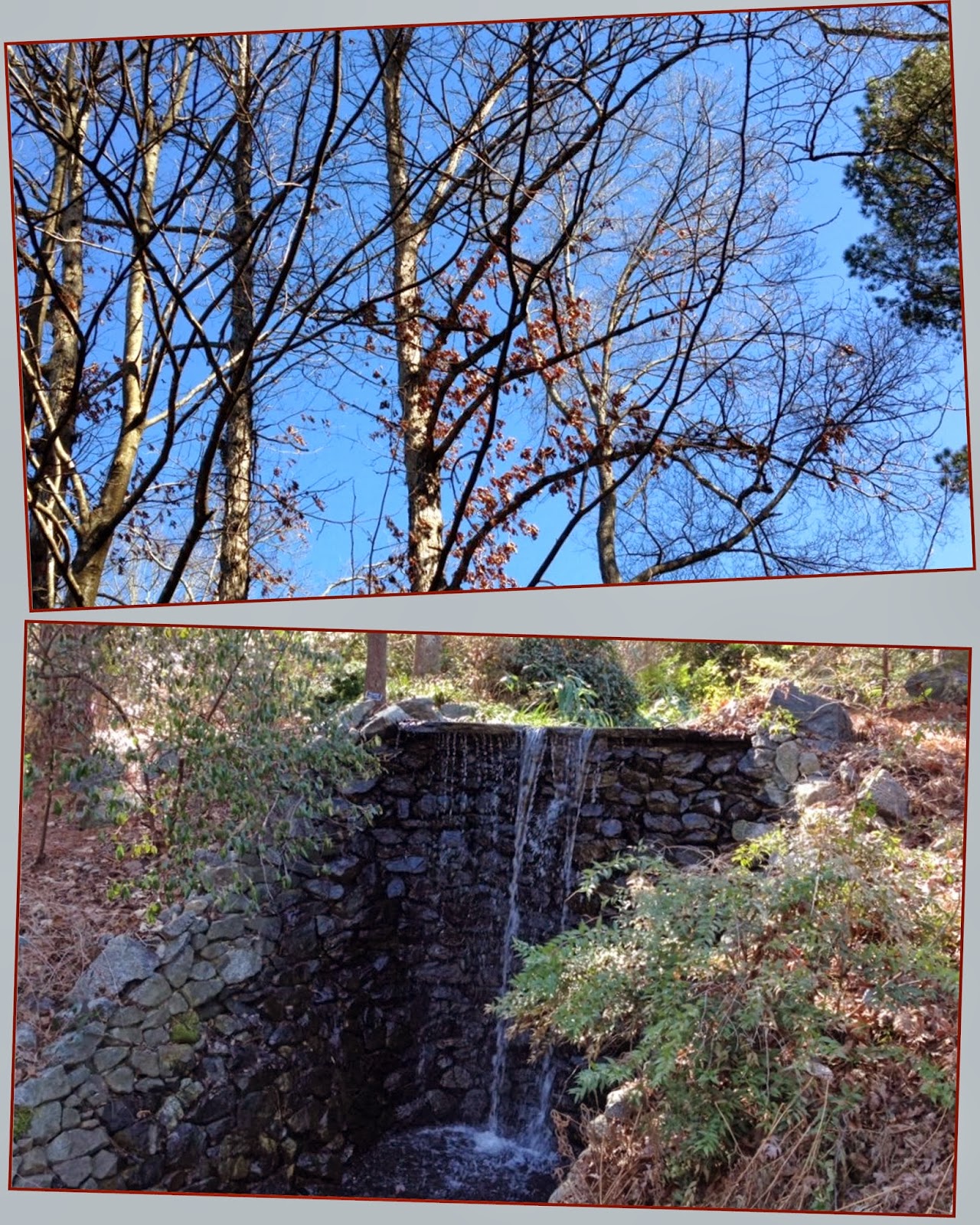 Actually, it was warm all last week.  Last Sunday we had dinner at my daughter's in-laws.  As usual we ate some tasty Indian cuisine - curries and small Indian cutlets. 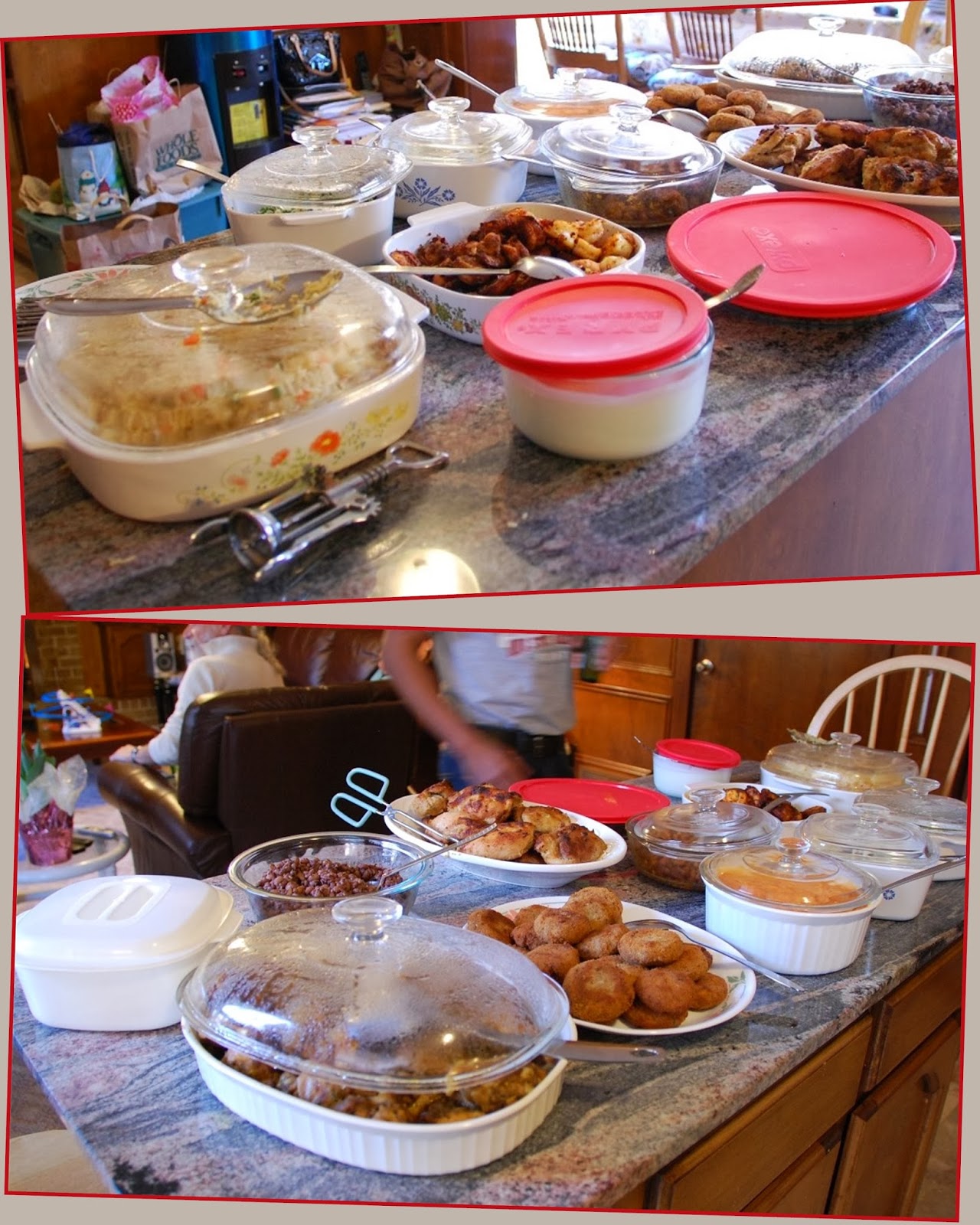 My little grandchildren were there.  The two eldest grandsons and a little friend were quite enthralled with their "carrom" game.  I had not seen this board game before.  My son-in-law's brother told me that it was popular in India and when they were children he and my son-in-law played it often.  I found out that it is a "strike and pocket" game of Eastern origin similar to table shuffleboard.  There are variants to the game - one of them called "Family-Point Carrom Game" is popular with housewives somehow.  My husband's nephew looked quite interested too. 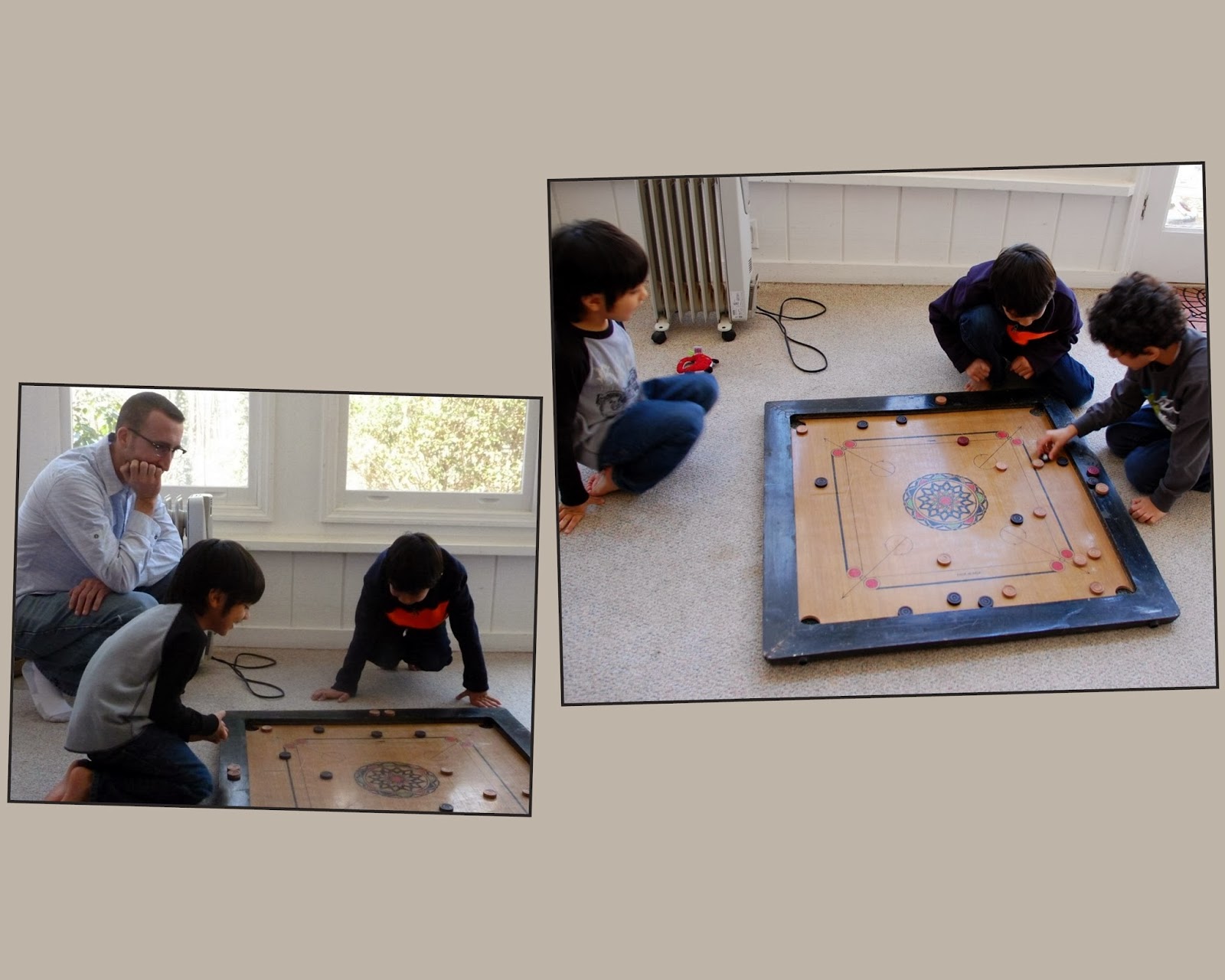 I also have been getting much enjoyment with what I may consider a "toy."  I have seen this on a couple of blogs.   It is a photo "app" for a cell phone called "waterlogue."  I purchased this app and have been playing with it with some of my pictures.  It is a lot of fun.  First I used the snow pictures I showed on my last post, the red barn and the cardinal in the bird feeder.  I'll show my original photos, then what "waterlogue" did to them.  They really look like watercolor drawings.  Click on them to see better. 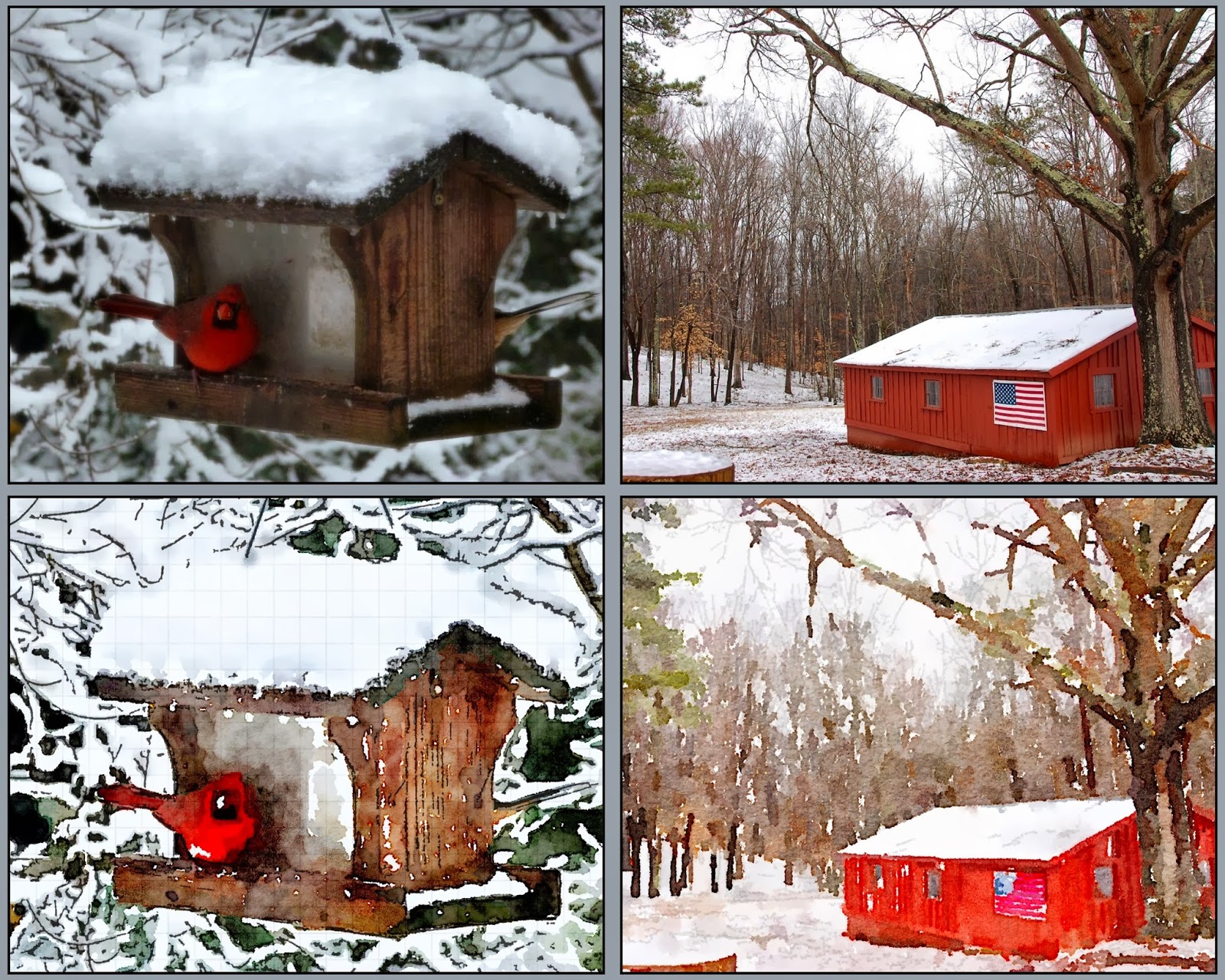 Then I worked with photos of my cats - Cody, the orange cat and Mitsou, my late grey Korat.  I could see printing those on nice paper and framing them. 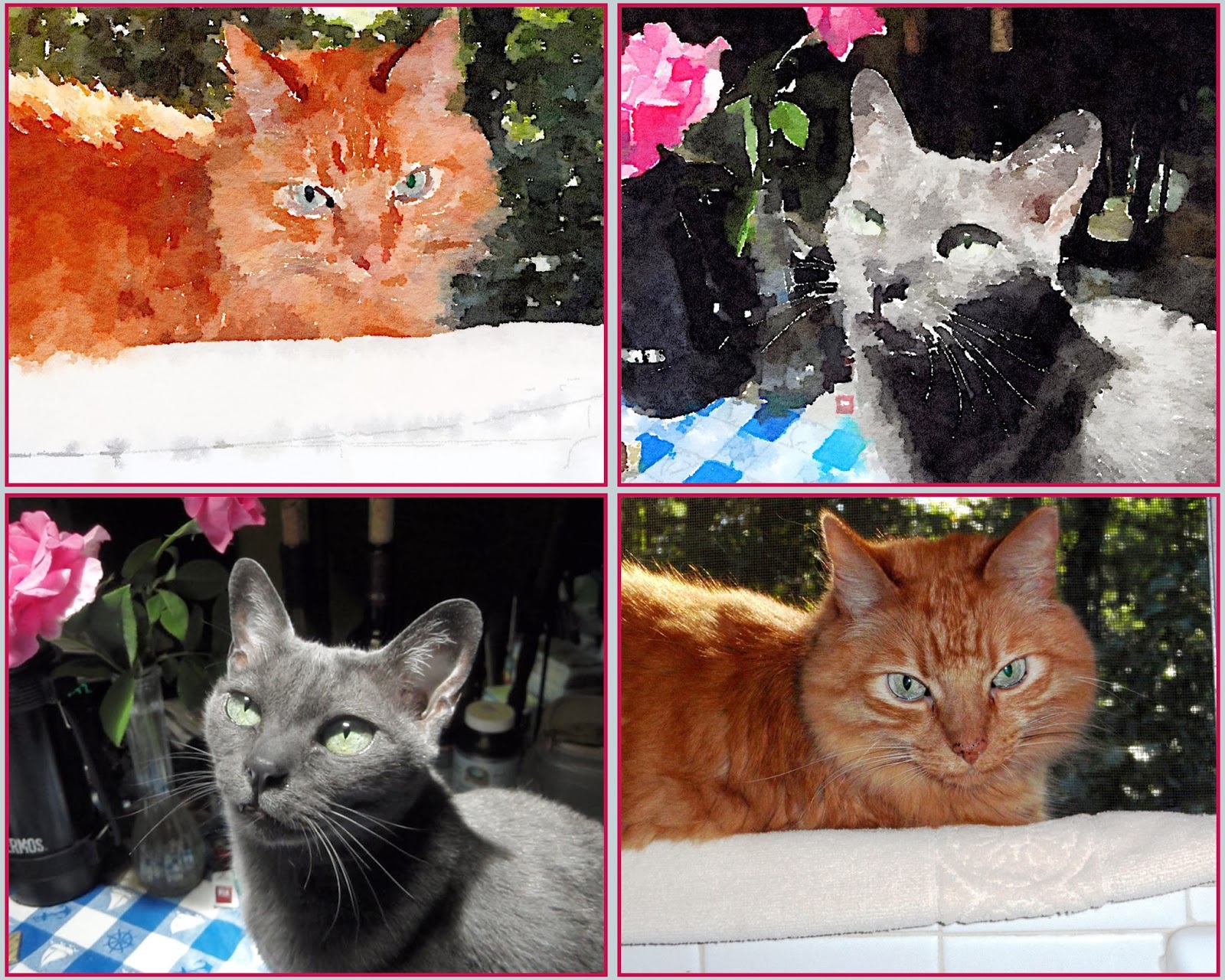 I'll finish with photos I took last Friday, the pond with the koi fish and the blue sky above the Smith-Gilbert Gardens (originally taken with my cell phone and not retouched at all.) 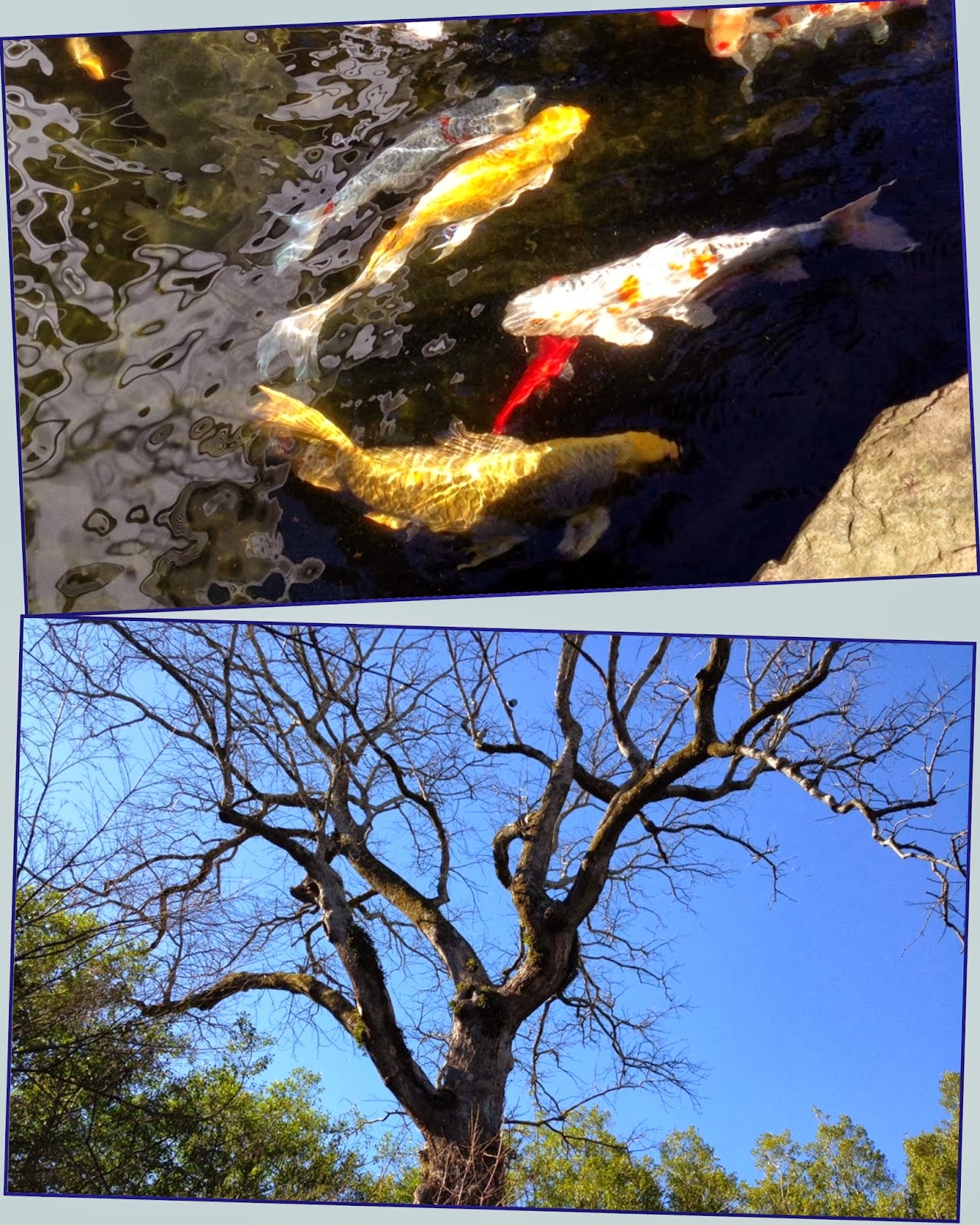 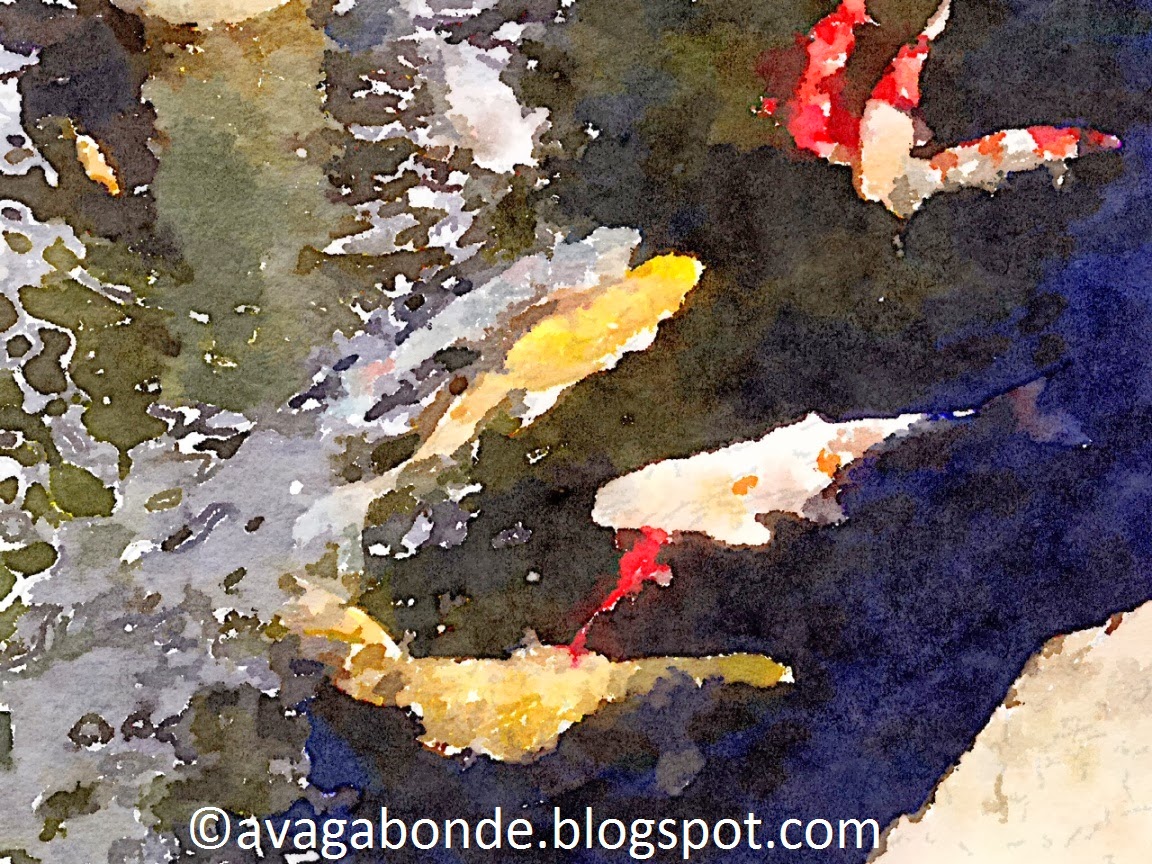 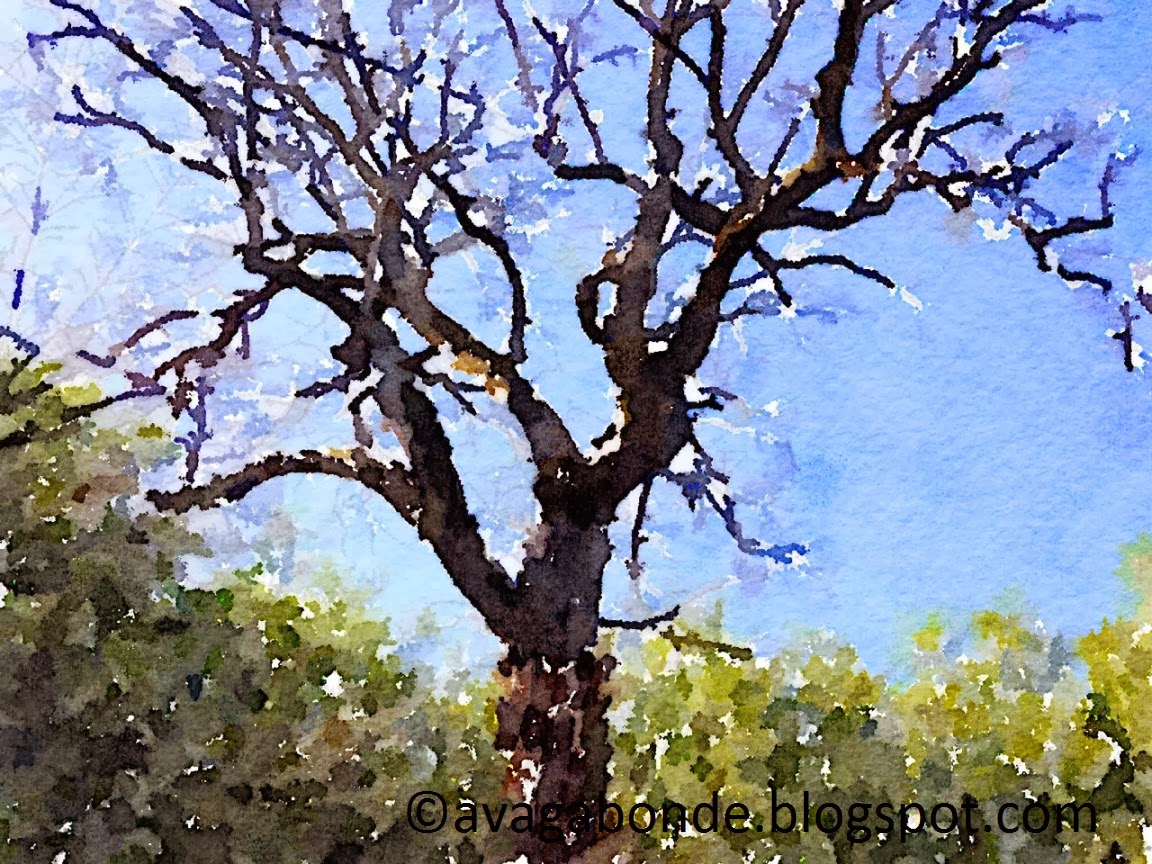 Gardens..grandchildren.. food and Waterlogue..
Love them all:)
Unfortunately..I am an Android girl.. wish I had the capability of having Waterlogue:)

Our Spring is still quite a ..way..away..
My Snowdrops and Scillas..shall arrive in May..Early May..

I love the "waterlogue" app. Have you seen the stain glass one? I have seen it on other blogs.
Cranes have been spotted in France as well as the uS. Spring is in the way.

I love the pictures of the flowers and that app looks like a lot of fun to play with. I will check it out. I know it is unusual to take pictures of snow in your area, but we in the northeast keep hoping this snow would end so we too can smell the roses.

I think you should definitely get those printed on nice paper and framing them. I wonder -- I bet you could get them on that canvas paper. Also, look toward Moo.com or Shutterfly for notecards or even business cards -- they both do wonderful work and these certainly merit it!

Your photos seem perfectly adapted to be made into watercolors -- beautiful!

I'll look for that app. I think it's beautiful! And what wonderful pictures, VB. It's always a pleasure to see your posts pop up in my reader. :-)

Beautiful pics. And love that app. for the photos.

Vagabonde, Great photos as usual. Love those first signs of spring. We're 'done' with winter! That spread of Indian food looks great. We are fortunate in that there are 3 or 4 decent Indian restaurants in the Knoxville area...and one of them is quite good. Take Care, Big Daddy Dave

Waterlogue app? What will they think of next?
Always a treat visiting with you.

The pictures of the Garden with the snow and the waterfall and the ice---re STUNNING!! It must have been something to see it "in person"....and then, a few days later---it looks like a different place entirely.
That App thingy is quite amazing! The pictures do look like they have been painted, and Beautifully so....
In a way it is kind of scary---pretty soon, we won't need to buy paints and/or colored pencils....All we need is that App!
Wonderful Post, dear Vagabonde!

The places you go to are so beautiful! I really enjoy all the pictures! That board game looks interesting! That is so cool, to turn your pictures into watercolors! Take Care and Big Hugs ;o)

What truly gorgeous photos. I LOVE that waterlogge effect. I shall have to look into that app. I hope spring is here to stay for you. My daughter tells me its below 0 with the wind chill in Chicago. It's going to be 8 degrees tomorrow.

Such pretty photos...the waterfall is a favorite. What fun to turn these into lovely watercolors! It's a lovely day here...hope you are enjoying the same! Susan

Oh I want that app !! I love it !
The game looks like it might be fun too.
Oh I am getting all kinds of good ideas from your :) besos, C

Your photos are amazing. The freezing waterfall is 'out of this world'. I'm just curious what kinds of shoes did you wear while hiking the snow/ice filled trail. We have so deep snow and icy paths that I haven't been going out to the wild these days. Plus, just a few days ago, I did venture out to the river, for there were flocks of ducks gathering there, my camera shutter alerted a coyote which became more freighted than I was so it ran away from me. That was a narrow escape for me, cause I was all alone in the wild, wouldn't know what to do if it attacked me.

As for the water-colour app, it's just amazing. They do look like high quality art work. And you know what, even the covers of The New Yorker, some of them anyway, were done by Brushes, an app on the iPhone, by the cover artist himself.

Those gardens are beautiful at any time of year. Your pictures of them are gorgeous.

I am not sure that I would want to play with the water colour app. I like good photography without messing it about.

I love visiting gardens in any season.

I think I'll be checking that app out. I love messing up my photos with various effects. I like your results.

Yes, everyone knows me. I wrote for local newspapers for decades and that added to who I am. But I just quit writing for them yesterday, and plan to avoid it if I can. I would rather jot down stories on one of my blogs than continue the other way. I was President of our Chamber of Commerce and of Rotary and on the Board of Directors of this and that. The Wall Street Journal had a story about me and so on. The television series I did topped it off and for 13 weeks people got to see me all over the world. In answer to your question on my blog.

I like what you did with the program and I like your photographs. All but the snowy ones. I am sick of snow. This is the 4th snowy winter in Ohio history and besides that it was colder than the devil and still is. I am so looking forward to spring.

I'm glad you got to photograph some snow. It's beautiful when it doesn't come in avalanches, as it seems to have done this winter where I live.
The frozen waterfall is really beautiful and I enjoyed your photos of it.

I absolutely love this series!!! Magical!

I love the water and ice photos! And the meal looks delicious. If I had a smartphone, I'd be getting Waterlogue this minute -- beautiful!!!

Gorgeous photos and I love the fun of the Waterlogue transformations. You've certainly had a lot of snow and ice this winter, far more than we have here in the UK except in the mountains of Scotland.

so much beauty here!

I love the photos of the water and ice.

We had the game carrom when I was a child. We used to play it at my grandmother's summer home in the mountains. I never really took to it, but I guess my father had played it as a boy.

I too bought waterlogue. It is so much fun. I experimented with a photo I had taken of our backyard. I then sent it to my husband via email. Unknown to me, he had printed it out and had it hanging by his computer downstairs. I love red bird on the feeder. That looks like it could be used a Christmas card. The cat photos are also quite nice. Fun!

Beautiful photos! And the "waterlogue" pics are very instructive. They help with shadow and contour effects that the novice painter should look for.

Dear Vagabonde, as always I found your posting interesting and enlightening. Your photographs always seem lovely to me--rich in sensory delights.

The app called "waterlogue" seems amazing to me. That photographs can be turned into watercolors. I wonder what that will do for and to watercolorists.

First of all, I really miss that we had absolutely NO winter here in Dutchland this year. How is it possible that you had it there in Atlanta??? Having lived there for 25 years, I know how unusual it was for you this year. (sigh)

Secondly, I really LOVE that waterlogue app. WOW. I'd be using it all the time because watercolor paintings are my favorites!