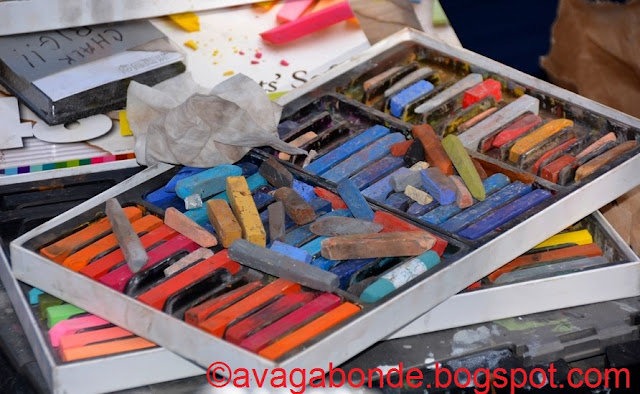 On October 11, 2015, we went to the Marietta Square to look at this year's Chalkfest.  On Saturday 10, in addition to the chalk festival were a beer fest and an antique car show, but it did rain a bit.  We preferred to look at the finished chalk drawings on Sunday.  It was a lovely sunny and warm day. 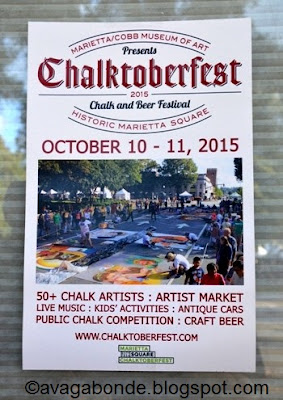 In 2013 we had gone to this festival and I had written a post about it - see my post of October 12, 2013 here.  In 2014, we again went to the Chalkfest on the Marietta Square - see my post of October 14, 2014 here.   Actually when I was looking on the Web to find information on the festival for 2015 I was very surprised to find out that under the Press Kit on the Marietta Chalkfest Festival 2015 the first information link on the site was a link to my blog!  I also recognized the owl in the poster below as I had seen the artist Beth Shistle drawing it on the pavement. 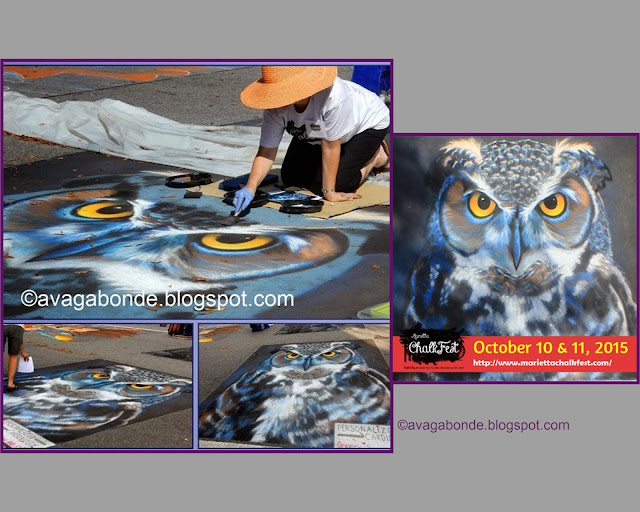 We could hear some music, and walking toward it on the Square, we passed several Halloween decorations. 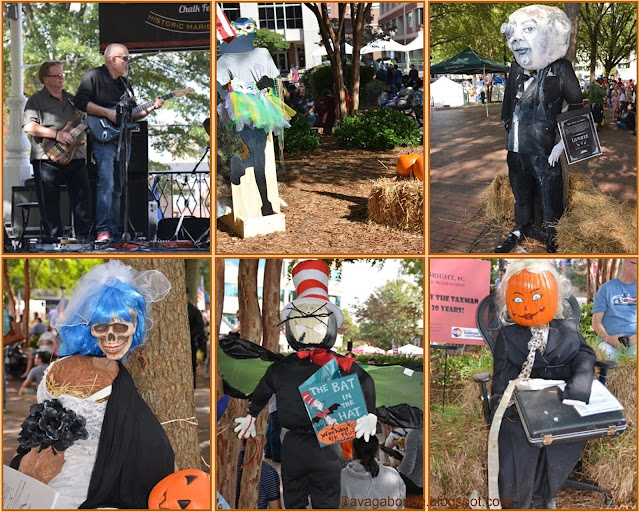 After listening to the music for a while we walked to the side streets to look at the chalk drawings.  There were many this year as more than 50 artists were taking part in the festival.  I took 240 photos and will have to cut this post into two parts or it would be even longer than my usual posts!  This year's theme was "Patriotic."  Each artist had been assigned a 10'x10' square on the pavement and had to show the name of their sponsors in their design.  As we walked around the streets some chalk arts were completed and some artists were still finishing their designs. 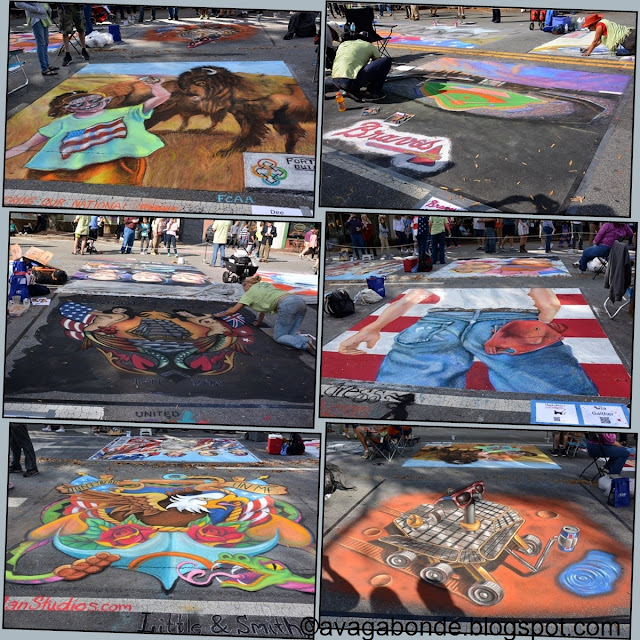 At last year's festival I had talked with Joel Yau, an artist from California.  I thought I recognized his face on a chalk design made by Alexandra Alfeo.  Alexandra is from West Palm Beach, Florida, is only 17 years old and still in high school.  As I was looking at the chalk design, Joel Yau himself walked by.  I told him I thought his face was on the drawing.  He agreed that it was him and to my surprised he remembered talking with me last year, saying to me ..."...I remember you are French and you have a blog."  Here is Alex's chalk drawing and Joel Yau posing for me on the drawing. 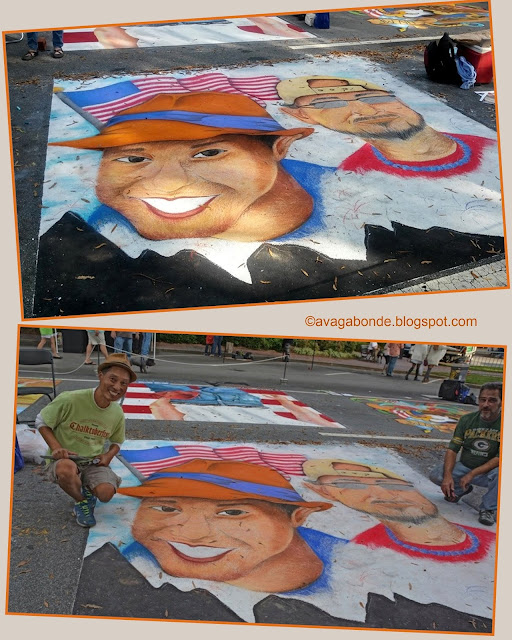 Then we came to Joel's chalk drawing which was completed.  Joel Yau has been chalk drawing in street festivals since 1997.  He has won many awards as his art is outstanding and delightful - I love his 1940 era glamorous beauties.  He participates in festivals in the US and many foreign countries, such as Canada, Mexico, France, Germany and more.  He is also a gifted painter, ceramic artist, illustrator and graphic art professional.  Below, the blonde beauty is the chalk art he did in Marietta.  The other pictures of his designs are courtesy Joel Yau - the center face is actress Gina Lollobrigida as a young woman, the sailor face is a tribute to veterans, and the dark haired woman in the bottom is Emily Carr, Canadian painter and writer from Victoria, BC., and one of my all time favorites femme of letters and art. 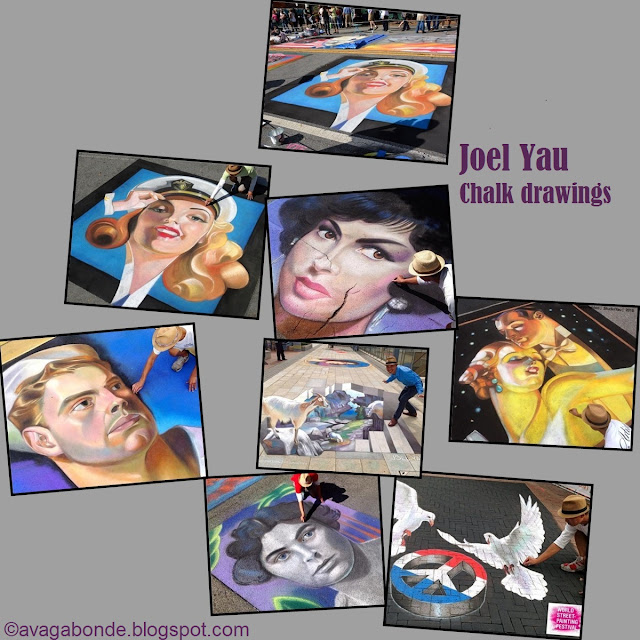 Walking around the streets we saw a great variety of designs.  Click on collage to enlarge. 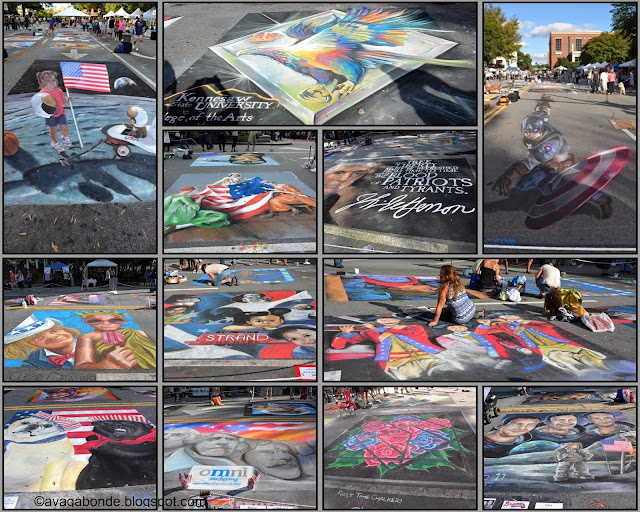 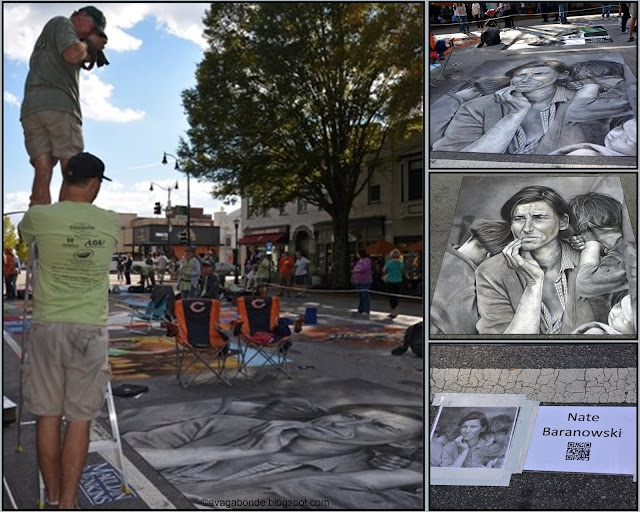 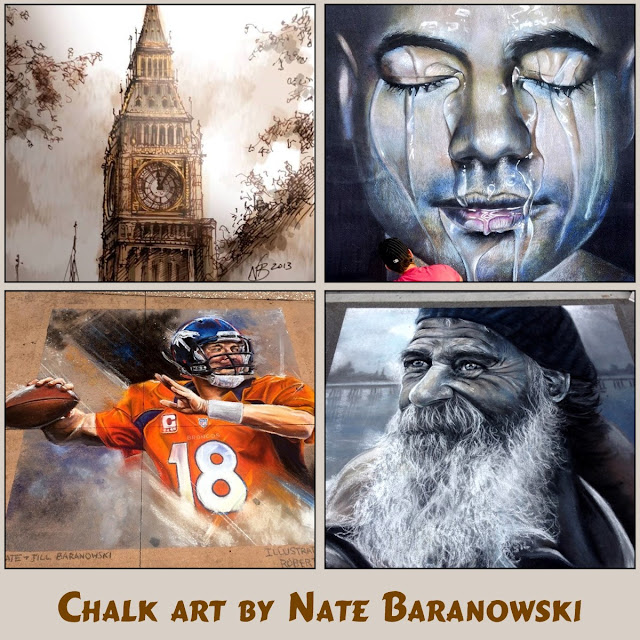 Many people had brought their dogs.  I love cats, but they cannot be seen outdoor on leashes, unfortunately. 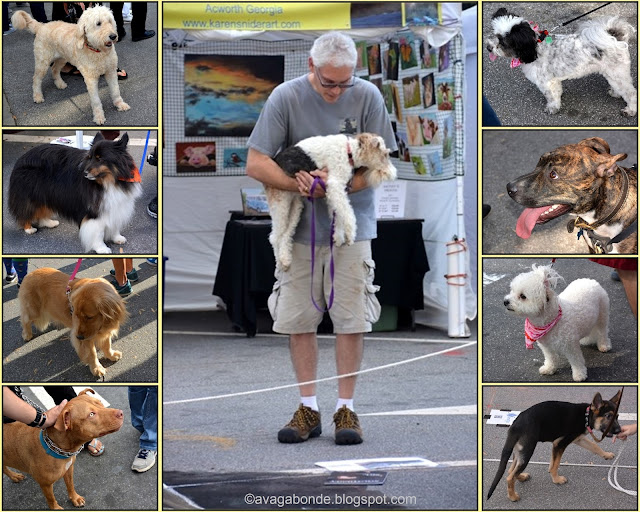 Below, on top left, is the chalk drawing of Holly Schineller, a resident of Tempe, Arizona, who has been teaching beginning warm glass classes around Arizona.  Joan Finn, from Kansas City, Missouri, is working on a rendition of President Jimmy Carter.  Yesterday, Sunday 6 December 2015, we were very happy to hear that Jimmy Carter, age 91, was now free of cancer. 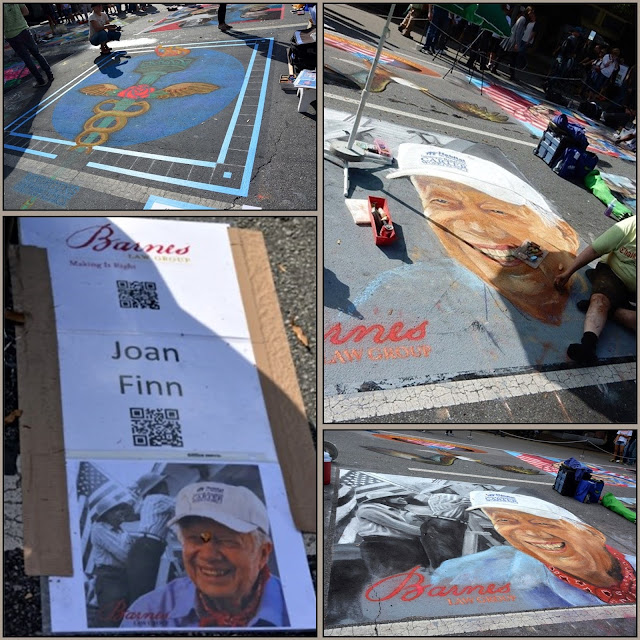 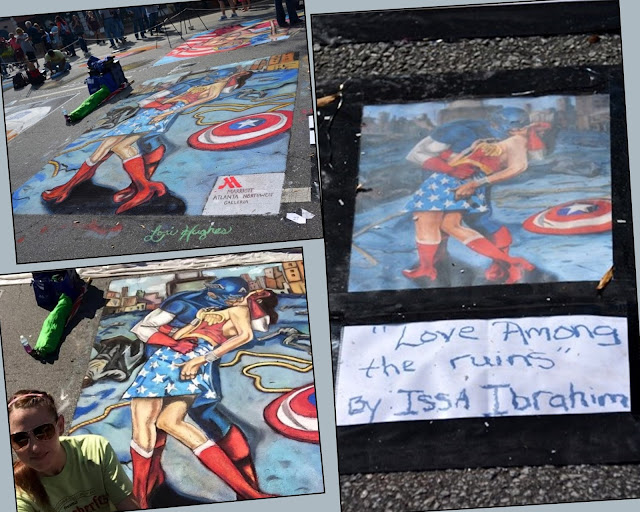 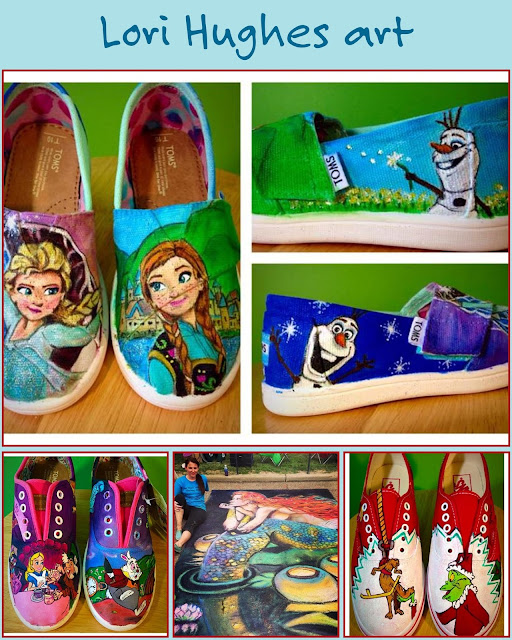 There were vendors on the streets along the asphalt drawings as well as places to eat and drink. 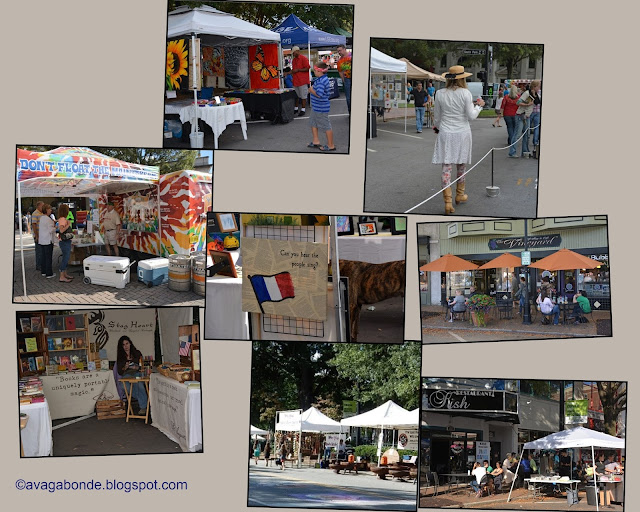 Zuleika Hodges, an artist born in Haiti, had drawn the beautiful face of an aviatrix.  Zuleika, now residing in South Florida, has been involved in art since she was very young.  Below my photo of Zuleika's drawing are two other drawings, courtesy Zuleika. 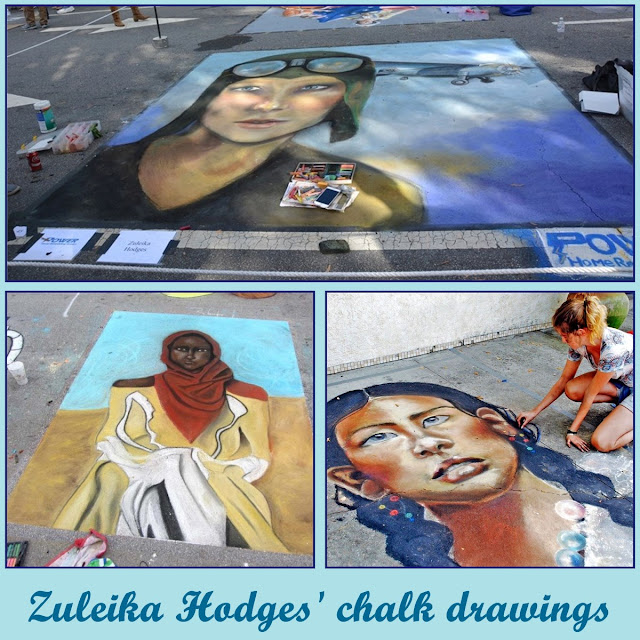 The Statue of Liberty was well represented.  Kevin Powell, a local artist, had Lady Liberty as a light house.  Jennifer Chaporro had an eagle flying around the Statue and Beatrice Flaig was working on the Statue of Liberty's face, half of it in color.  I did not see the finished drawing. 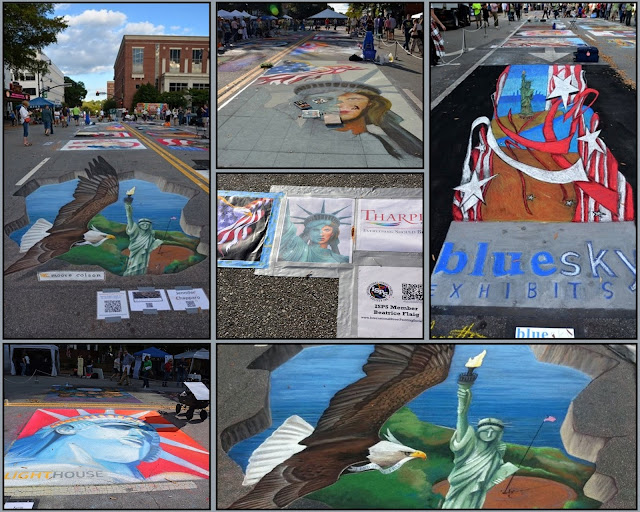 Many people wanted to take pictures of themselves or others in front of the drawings so it was a bit difficult sometime to take a good photo. 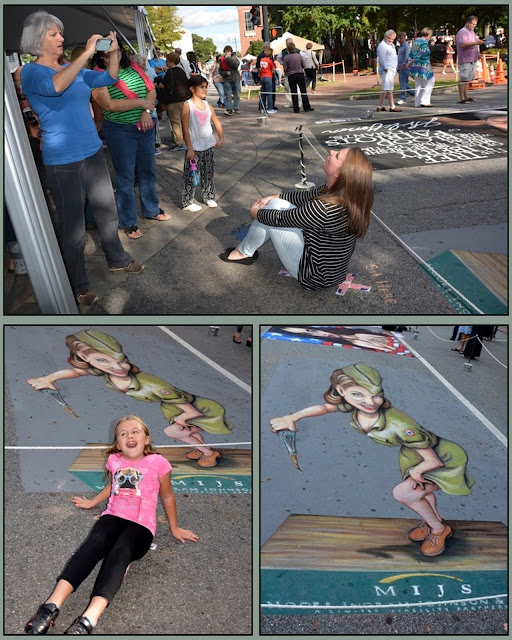 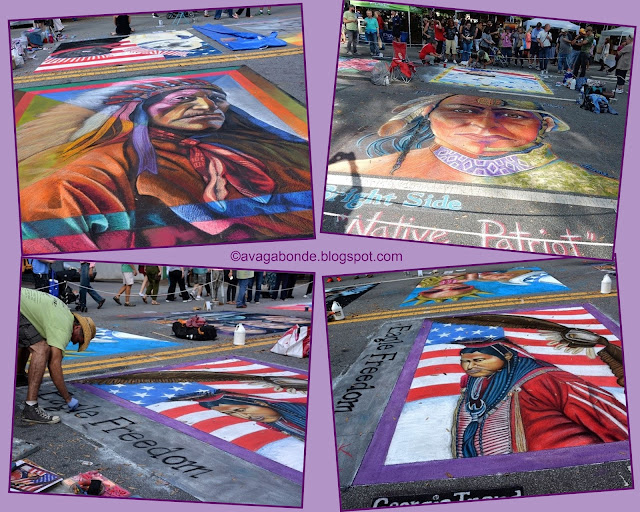 Ron Hawkins, of Native American heritage, has been creating art since he was 3 years old.  He works in pen & ink, watercolor, acrylic and color pencils.  He draws outstanding birds as you can see below.  Pictures courtesy Ron Hawkins. 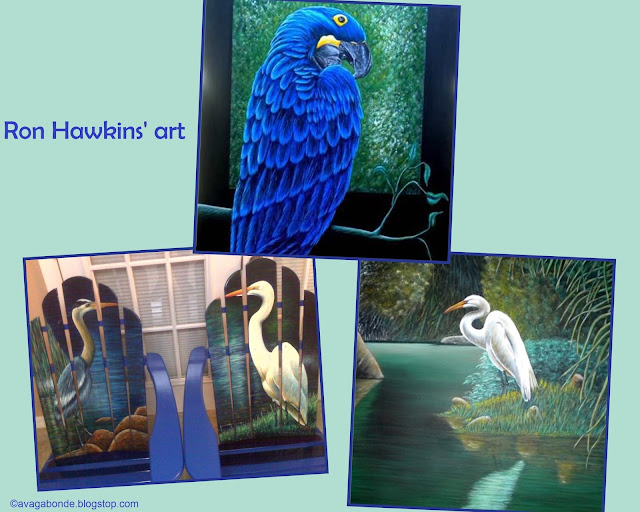 Beautiful patriotic ladies were drawn by Anat Ronen, on top of collage below.  Craig Thomas drew the lady with a sword on the left and Jessi Queen was inspired by a vintage poster from the Red Cross. 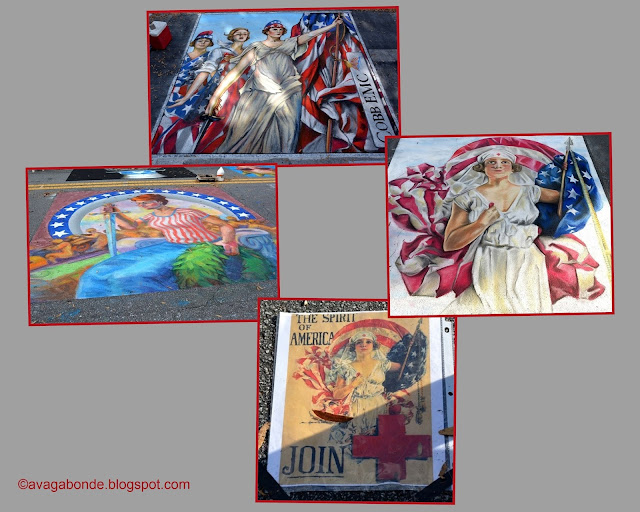 Lysa Ashley is an elementary school teacher and has been street painting for over 20 years.  She has won numerous awards, including Best of Shows.  In Marietta, Lysa painted the delicate figure with long brown hair, in center of picture.  The other samples of her art are around the collage, courtesy Lysa Ashley. 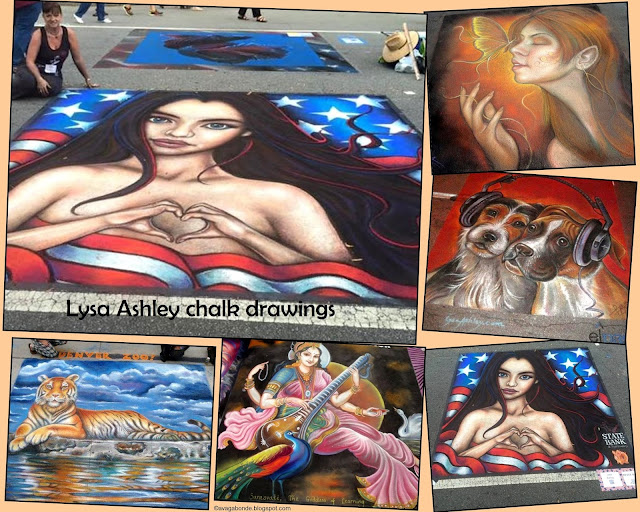 I'll stop part one of this post with more dogs walking with their owners and little puppies being carried.  (I just noticed that you can see my reflection in the door, taking the photo of picture on the left!) 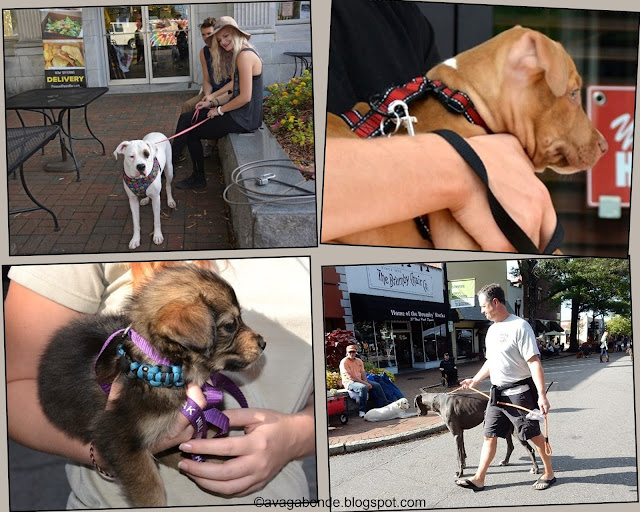 Hi Vagabonde - incredible works of art ... something I can't comprehend - but I love seeing them ... and Marietta is obviously a central hub for the street art fair ... cheers Hilary

I have seen this on the news a few times and am always amazed.

Fabulous pictures! We used to have a chalk festival (much smaller) here in Bellingham in August, but it was discontinued and I still miss it. I love these pictures, and yes, there you are in that window! My favorite are the beautiful women with Gina in the middle. And the birds, and... I look forward to more! :-)

Vagabonde, Looks like a fun event! Some very nice chalk drawings, that's for sure. I can't even draw a straight line but my brother, mother and step-father were all artists. A stepbrother who was an artist and sign painter who lived in South Florida took part in some of these chalk fests. He was pretty good and I have photos of at least one of his chalk efforts. I'm with you... Cats are us! Dogs are nice but cats are infinitely more interesting! Take Care, Big Daddy Dave

What an absolutely delightful day, outing and post. I suspect they will link up to your blog this year as well.

Oh I remember your previous posts about chalkfest. I am always astounded by the talent you show us the pictures are incredible! Sarah x

Amazing artistry. Thank you for sharing so many of the creations and how kind of the photographer to take some from a ladder. The chalkfest is something I've never experienced as you certainly need good weather for such an event.

Wow what superb art work. I have to say N. Baranowski is my favourite but they are all excellent. We are off on Monday to spend Xmas in the UK so we wish you well over the holiday and all the best for 2016. Diane

WOW! What amazing art works! How is it possible that I've lived in the Atlanta area since 1971, and didn't know about this sidewalk chalk festival in Marietta??? It sounds fantastic. Hopefully, I'll remember it next year, so my hubby and I can attend. Woo HOO! (Just my kinda thing!)Thanks. :)

Such talented artists. I'm glad u gave the names so i can look them up. We have seen a chalk festival up in San Luis Obispo and it was great. Also saw some wonderful scarecrows in Cambria before where the locals create them.

What a great festival, such talented artists.

Lots of beauty and creativity! Amazing!

Very interesting chalk festival, Vagabonde. There were many talented people. I liked the Ron Hawkins's drawings. I also loved an owl on the first pictures.
Have a nice week!

Fantastic! What a treat for us all. You are truly the best blogger/travel photo-journalist I know. Each photo, a true pleasure to behold.
Many thanks.

I wish I had gone to this festival. I didn't know about it, but it was only about two hours from me. Such fantastic drawings and your photos say it all.
thanks for sharing and I look forward to your next post.
I think I will share this on FB.

Wonderful selection of art works. temporary chalk seems such an unexpected medium for these highly skilled artists to use.

That was incredible. Never heard of one way out hear on the farm. Glad to see such great work for the community.

Simply Amazing! Yes, I remember your posts on the ChalkFest from years past. I'm amazed all over again. And this time, maybe even more when I see the realistic work of that famous photograph of the migrant woman with her children. Thanks for sharing these wonderful works of street arts.

What a fun show... Those artists are so talented ... And it is quite a thing to create and execute those ideas so beautifully while knowing they are not permanent! A real lesson in Zen ... And life!

All the art is truly breath taking and amazing! Love the puppies! Tried to see you in the reflection in the door! LOL!