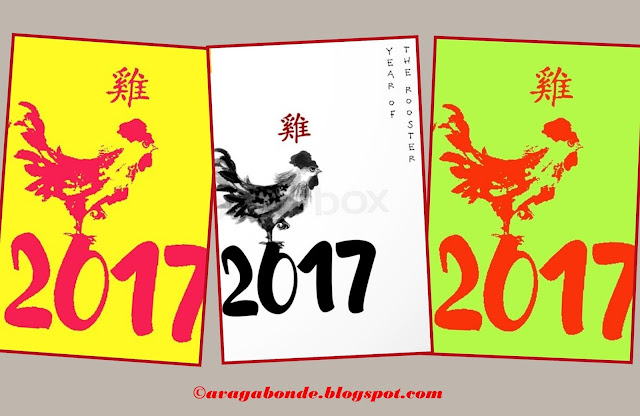 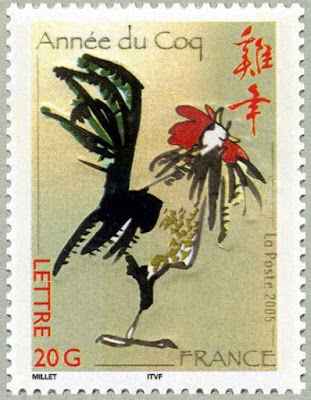 My husband was born under the Chinese earth Tiger and I was born under a Chinese gold Dragon (said to be "Natural, straightforward and unpredictable.")  Florence Nightingale and John Lennon were gold Dragons.  Abraham Lincoln, Charles Darwin and Martin Luther King, Jr. were also Dragons.  Famous people born under the sign of the Rooster are Catherine the Great, Eleanor Roosevelt, William Waulkner and Katharine Hepburn.  Click here if you do not know your Chinese Zodiac sign. 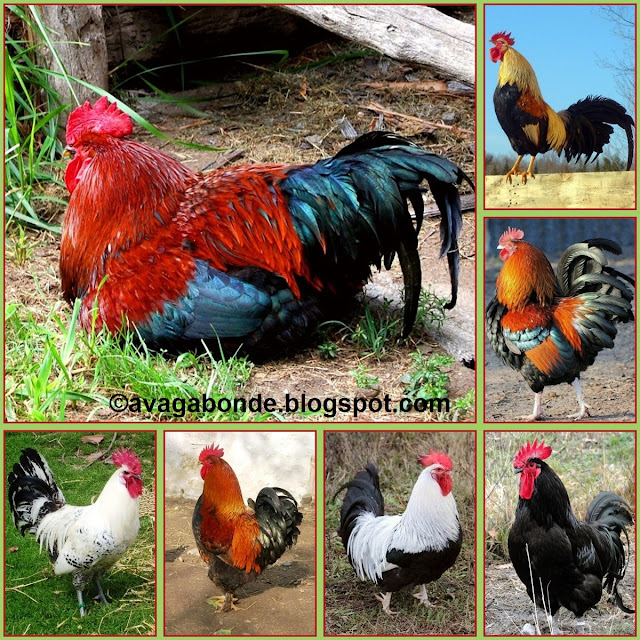 The New Year according to the lunar calendar is also celebrated in many other Asian countries, such as Korea, Malaysia, Thailand, Vietnam, Indonesia, etc.  It is a fun time for festivals with traditional foods, gifts, dancing with the color red in prominence as it is a sign of good luck.  New money bills are often given in red envelopes as gift.  It was difficult to find predictions for 2017 under the Rooster sign.  In general a Rooster year is a bit unpredictable, good for people of action who act first and think later (as in aggressive diplomacy.)  A Rooster year can also bring fanaticism and coarseness, unfortunately.  Roosters, as animals, are very colorful with many different breeds.  Below are some French breeds shown on stamps.  Rooster in French is "coq." 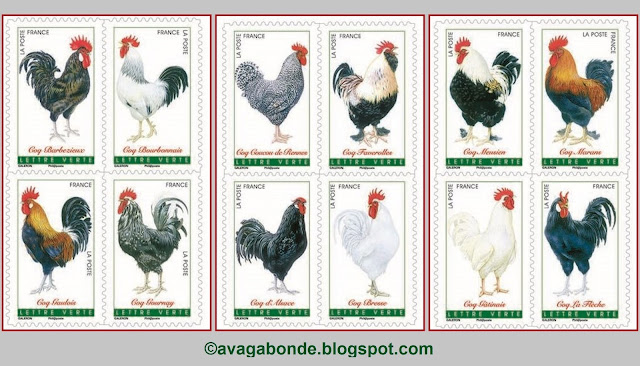 Below are a couple of vintage postcards with other English breeds. 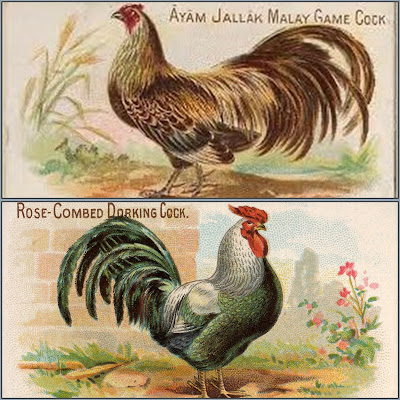 Below top postcard is the Brahmas Hermines breed and under it the Scots Grey breed. 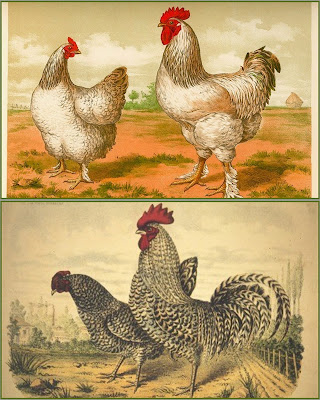 I always liked roosters.  When I was growing up in Paris and wished to draw a rooster, my mom took me to the zoo so I could see one.  When we moved to our house in Georgia, there were chickens and a rooster in the barn in the backyard.  I decorated our kitchen with many rooster motifs and still have several rooster prints.  I also made a rooster embroidery (must already be in a moving box.)  Roosters have such distinctive plumage - I played with some of my pictures - see below and please click to enlarge to see colors and details better.  By the way the rooster in the center was taken at the Cherokee Indian Reservation in North Carolina.  I showed this rooster at the end of my post "Osconalutee Mountain Farm Museum" of 13 August, 2009 - click here to see it. 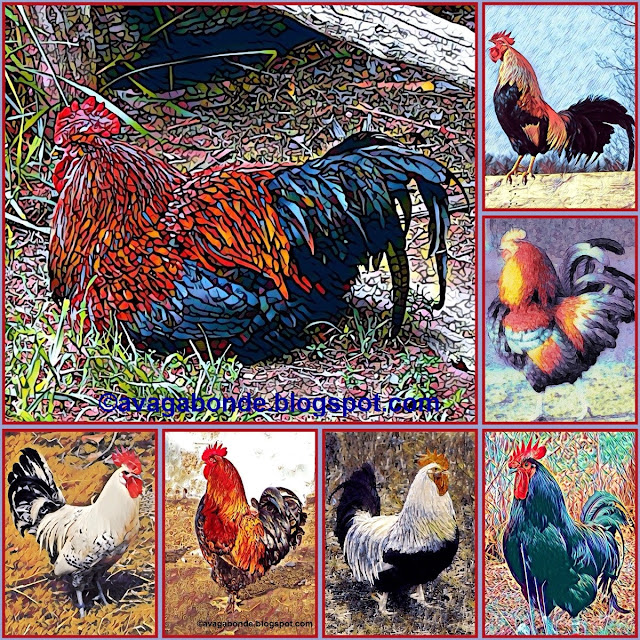 The rooster has been a symbol in many religions (Buddhism, Christianity, Hinduism, Islam, Judaism, Taoism, Zoroastrianism.)  The cockerel was the symbol of independent Gaul (early France) and now the "Coq Gaulois" (Gallic rooster) is the emblem of France.  It has also been a logo for French sports since 1909. 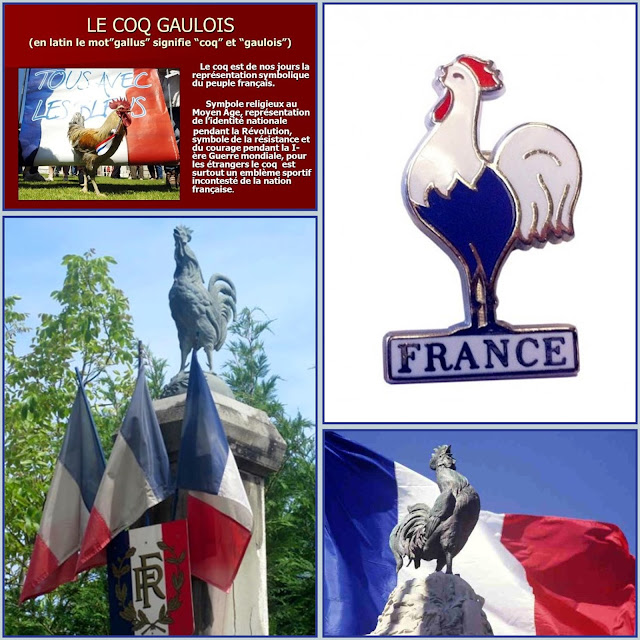 For hundreds of years the rooster has been on top of churches and other buildings as a weathervane. 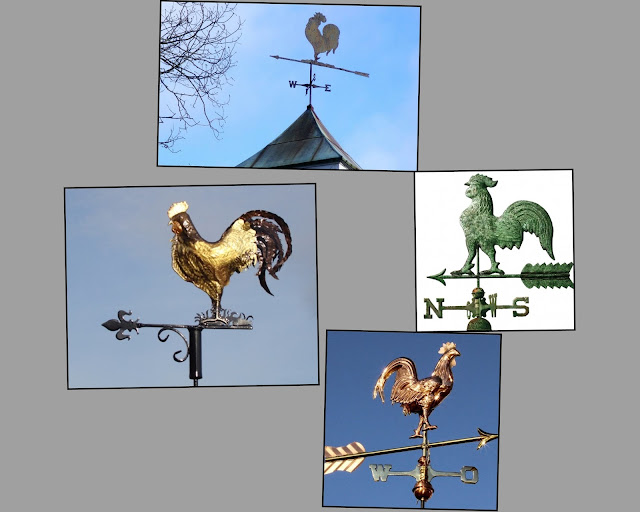 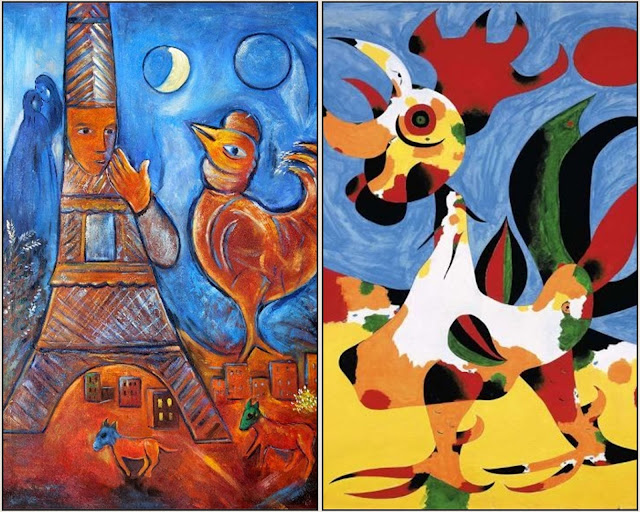 Here is a poem on the rooster by French surrealist poet Louis Aragon (1897-1982) and my feeble translation.

Bird of iron that shows the wind
Bird singing at the rising dawn
Bird that is a quarrelling bird
Bird stronger than our misfortunes
Bird on the church and the awning
Bird of France as of yore
Bird of all colors.  - Aragon 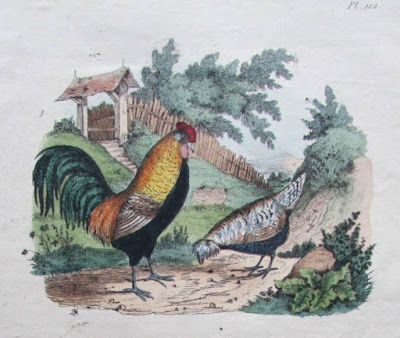 Here is a series of roosters by Russian painter Serguei Toutounov who was born in Moscow, Russia, in 1958 in a family of painters.  He married a French woman of Russian ancestry and now they live in France. 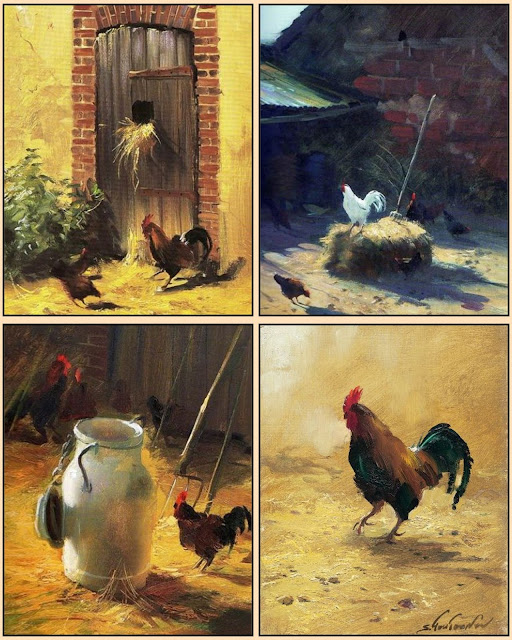 The year of the Fire Rooster is said to be a year of emotions, a complex and complicated year.  I hope your year will be serene. 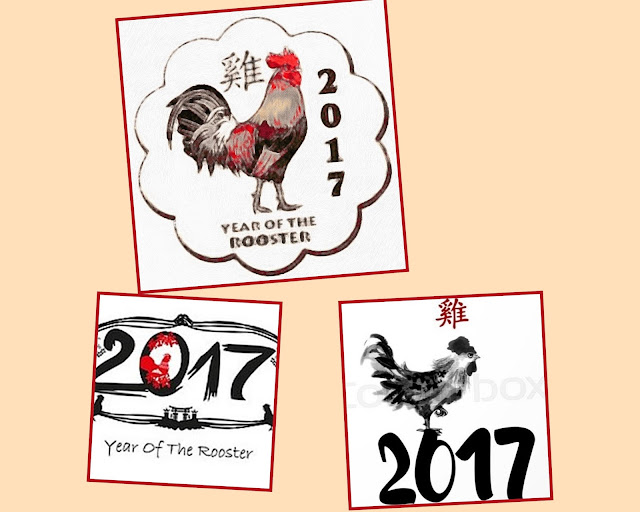 What gorgeous roosters. I am a goat in both Chinese and English astrology. I hope things go well for you in the coming year.

Hello Vagabonde. What a lovely post. I learned so much. One of my daughters is proudly celebrating as she was born in the Year of the Rooster. I'm a Rabbit and my husband is a Rat. Oh dear. And now I know why I see all those roosters as weather vanes in France. I'd never looked it up. As always, spectacular photos of those roosters especially!!

Hopefully your year of the Rooster will be bringing you a lot of positive changes, dear Vagabonde. We in Wallonia, too, have the rooster as an emblem - le coq wallon. My husband went one year secretely to Barcelona (Cornwall, UK-- haha) where an old forge adverted for individual weather vanes and such. He took the walloon flag with him so that the smith had an example and he since stands proudly on the rooftop and indicates the wind to all neighbours, as well. I must remember to remove him when we change country. I have two roosters in my pen but sadly we have now also the problem with bird flu and they cannot roam freely in the garden as they could before. I so hope, this will soon pass but often with migration of wild birds, it will be worse and the ban will stay for longer.

I actually love the sound of a crowing rooster at dawn. There is one somewhere nearby, which I hear in the summer when our windows are open. I was born in the Year of the Horse but don't know which one of the four. I just looked it up: I am a Water Horse. Loved this post, VB. You are on my mind often and hope things are progressing in the move toward your new home. :-)

I forgot to say how much I love your collection of roosters! :-)

Dear Vagabonde, I enjoyed this post very much. I'm an earth Rooster, and have included some Lunar New Year rooster talk over on my recent post, too.

A friend has given me a 2017 Chinese almanac that gives advice for each day. For example, today's advice is:

Hoping this will be helpful! xo

I hope my 2017 doesn't happen like it said else I'm going to be sick and lose my fortune.

Vagabonde, Interesting bit about Roosters, especially as relates to Chinese culture. As it turns out, our son is an 'earth' rooster, my wife is a 'gold' rabbit and I am a 'water' horse. (The general description of a water horse fits me for the most part) Roosters from around the world can be stunning indeed! My mother had roosters for a number of years. They always tried to attack me but I survived and so did they... Take Care, Big Daddy Dave

This is such a lovely post! The roosters are gorgeous, and I love all the images and paintings as well! Thank you so much for sharing.

I hope you have a great rooster year too!!! What a great post! I love the vintage pictures and the art! Roosters are so much fun! Big Hugs!

Such noisy boys those colorful roosters and you certainly have shared some very handsome ones here.
They can be annoying early in the morning - even though we're within the city limits, a far off neighbor had one some years back and it made a terrible din. It's gone now - perhaps reported by a closer neighbor who must have been driven crazy listening to that noise so early each day!

I love all the pictures of the roosters. We have chickens but have learned the hard way that, no matter how beautiful they are, there can be only one rooster in a flock.

You're such a thorough researcher, VB. I never knew there are so many kinds of roosters. The ones I'm slightly familiar with of course were the ones I'd seen from my childhood days in Hong Kong. That was decades ago. And if you're curious, I was born in the year of the Ram (or, I'd like to see it as the Sheep, much milder) After forty plus years in Canada, we don't celebrate it much except maybe a dinner with family or friends. Nothing out of the ordinary. We go out for dinner all the time. And no red pockets from me. I never follow that tradition. My parents stopped handing them out after we came to Canada.
It's always interesting coming to your blog even if it's a topic I thought I knew. Thanks for stopping by the Pond at Ripple Effects. Your visit is a delight as always.

I thoroughly enjoyed this post with its vibrant colors and very interesting facts. You forgot one French rooster and that is "coq au vin" 😄.

I spotted a typographical or perhaps predictive text error without even having to click on your link to the farm in Cherokee, North Carolina, which is one of our favorite areas to visit. Surely the farm's name is Oconaluftee, like the river, non?

Your posts are always wonderful.

Enjoyed this post. Have never checked into signs under which I was born or Chinese animals, but maybe I will. Fascinating about the roosters. We lived in rural areas for a few years when I was young. Had several varieties of chickens, especially recall what we called game cocks -- beautiful feathers as some you pictured.

My how I loved this post. I grew up with roosters calling in early morning hours. To this day I smile when I have the chance to hear one.
I loved how you found so mant pics to depict them. Thanks for this lovely post.