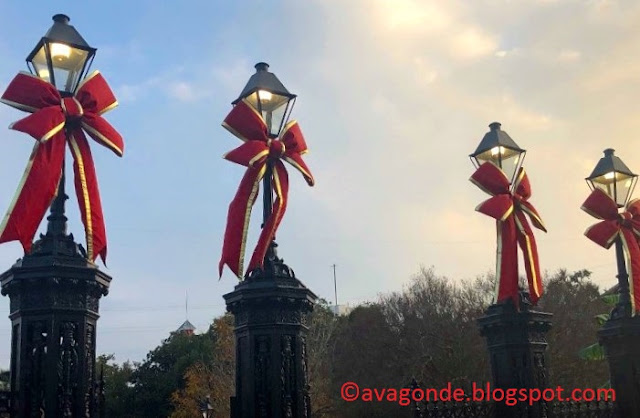 It has been raining all day here in Nashville.  I came back from Georgia on Wednesday December 18, 2018, as I did not like to fight the rain on the highway; the trip is tiring enough as it is.  Thinking now about New Orleans is pleasant.  From the start New Orleans was a party city.  In my last post I mentioned that 2018 was New Orleans 300th Anniversary.  The city was founded in May 1718 and named La Nouvelle-Orléans  in honor of Philippe II, Duke of Orleans, a nephew of French King Louis XIV.  Philippe loved music and to party.  Already the first Mardi Gras in the United States had been celebrated there in March 1699.  The music, parties, creole cuisine and festivals have kept up.  New Orleans is fun and keeps sadness away.  Music is everywhere.  Walking along Royal Street after visiting the Gallier House I went by a band playing in the middle of the street. 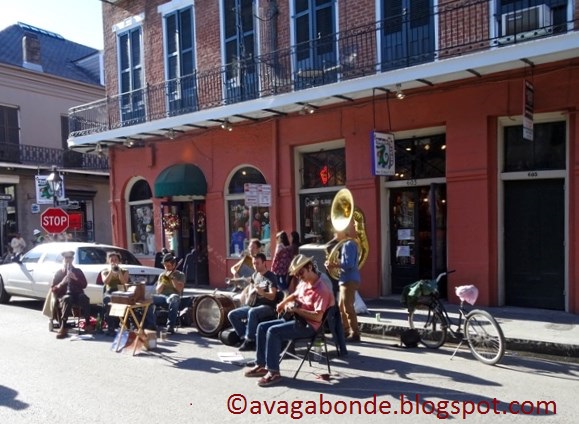 Later on, as I stopped in Jackson Square to rest on a bench, there was a band playing in front of me, under the sign "Church - Quiet Zone."  :-) 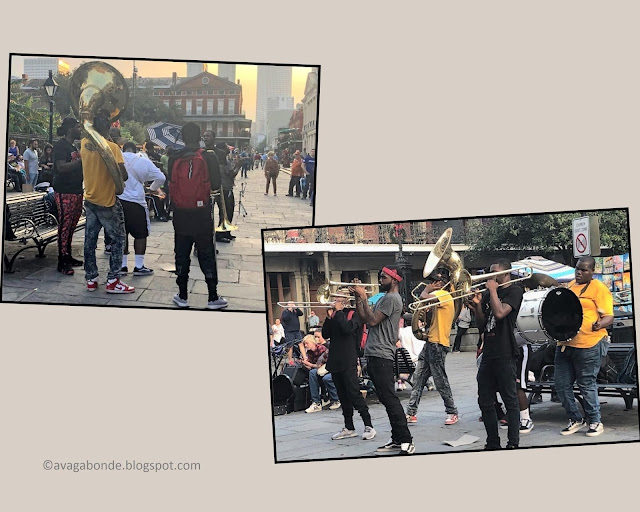 Then I heard more music coming down the side of the road.  I walked up to it - it was a "second-line" wedding parade.  "Second Line" is a brass parade tradition in New Orleans.  It is believed that it started in West African circle dances from a long time ago.  The "first line" of the parade consists of the band, the grand marshal and the people who obtained the parading permit.  The second line is made up of the rest of the party and anyone who would like to join the parade.  Second line parades for funerals are well known but these other parades are also used in many types of celebrations such as the opening of a business, or the anniversary of a neighborhood, or a wedding, or a birthday, or Mother's Day, or the birth of a baby, or the start of a convention, or any reason, really.  So, as you may be walking in the French Quarter, a second-line parade with a brass band can be coming toward you, with people following with handkerchiefs, parasols or umbrellas and, if you like, you can join the fun.  As I was watching this second-line parade the new married couple came after the band, each with a Champagne glass in hands, the guests were behind dancing and twirling their napkins in the air.  Below are examples of second-line parades.  (Click on collage to enlarge.) 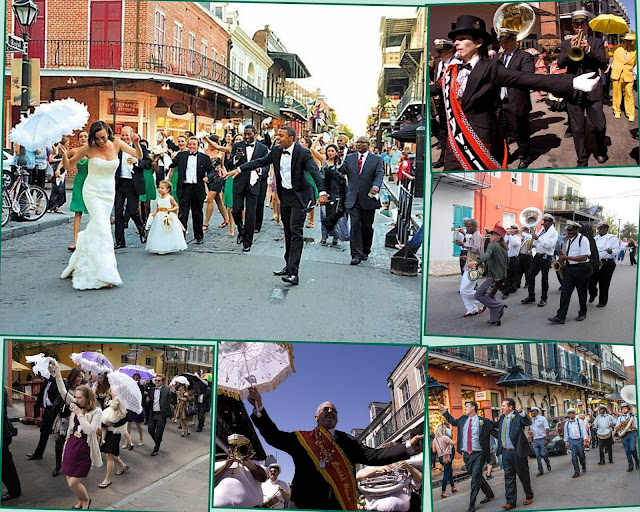 I walked back from Jackson Square to our hotel on Canal Street (helped by my cane.)  The French Quarter, unchanged since 1721, is about 13 blocks wide and easy to navigate.  Below is a map of it, courtesy Wikimedia Commons. 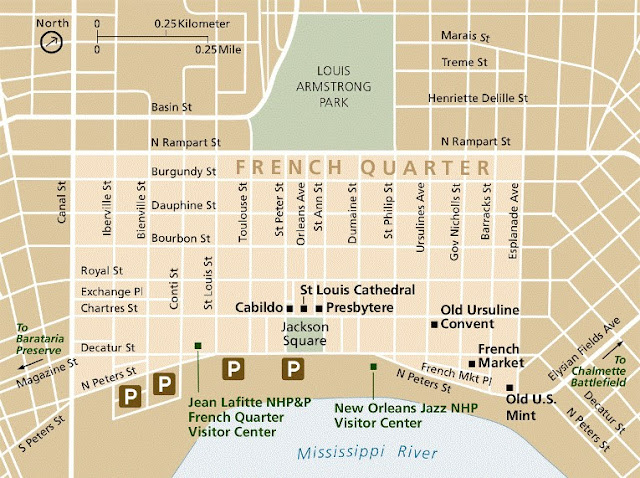 Along the way, I walked first by an interesting couple wearing period clothes, just talking to each oher then I saw some pretty Christmas decorations on balconies and doors.  The two little snowman and woman were Saints fans.  The Saints is New Orleans famous football team.  The fleur-de-lis is the symbol for the city of New Orleans and you will see it everywhere.  The New Orleans Saints' team has a variation of the fleur-de-lis in their logo since 1967. 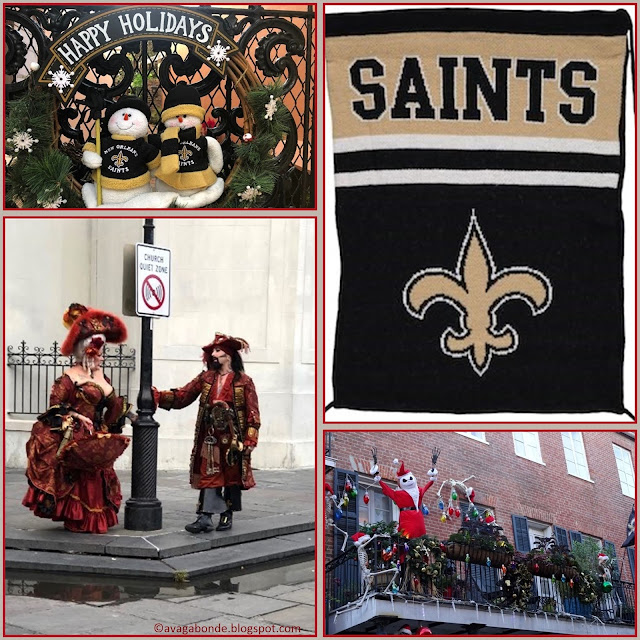 My two youngest grandchildren were flying in from Nashville with their Chinese au-pairs later on that afternoon.  I was looking forward to taking them to a couple of historic hotels to look a the Christmas decorations.  Our hotel had a pretty Christmas tree in the lobby. 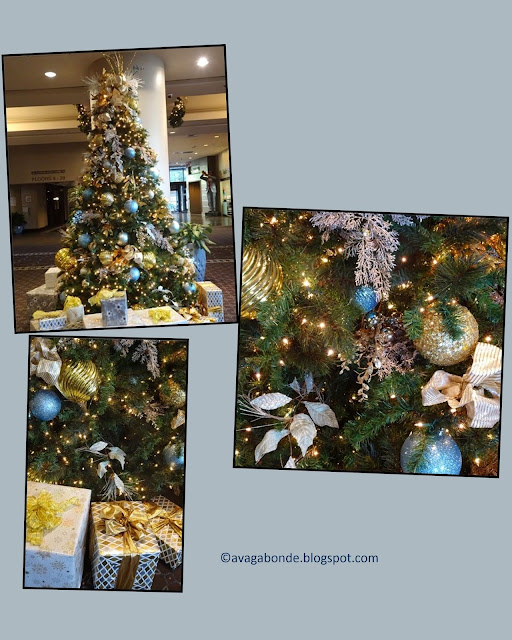 In May 2012 our daughter attended a conference in New Orleans as well.  My husband and I stayed at the Hotel Monteleone then.  I wrote about the hotel in a post called The Ambiance of New Orleans (click on it to read it.)  The hotel was founded in 1886 by an Italian family and their descendants still own the hotel.  It is one of the last family-owned hotels in the USA.  It is an historic landmark and a member of the "Historic Hotels of America."  It has been a favorite of many southern authors.  When in New Orleans Ernest Hemingway, William Faulkner, Tennessee Williams, Truman Capote and many others were frequent guests.  Below is a vintage postcard of the hotel. 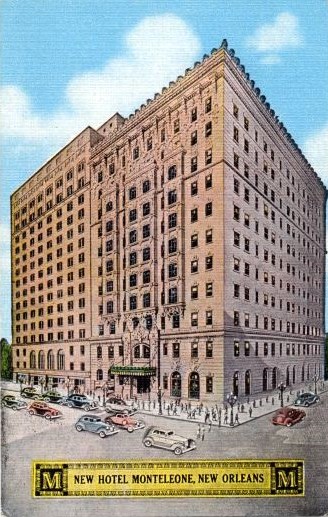 A girl choir was caroling in the hotel lobby, with gusto and great voices.  Bright lights were all around - coming from the polished marble floor, the gleaming brass appointments, the glittering chandeliers, the sparkling lights in the Christmas trees.  Even the old grandfather clock was surrounded by a garland of lights.  The antique grandfather clock dates from 1909 and was hand carved. 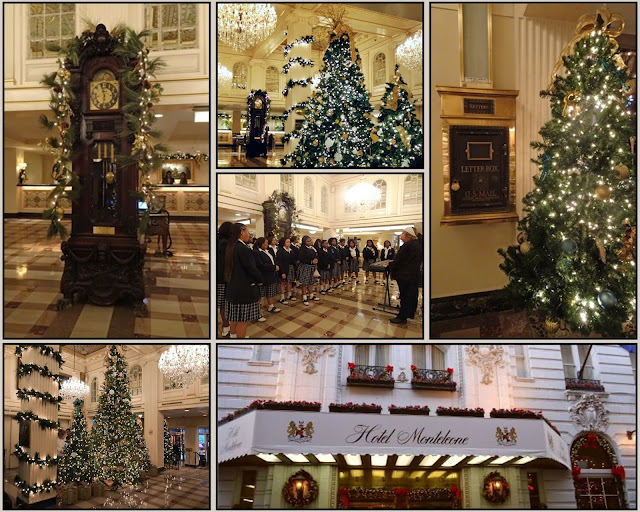 In the evening my two grandchildren and I walked to another historic hotel close by, the Roosevelt Hotel.  This hotel was originally named Hotel Grunewald and was opened in 1893 by a German immigrant, Louis Grunewald.  A new tower was added to the hotel in 1900 to house 400 more rooms.  A nightclub there, called The Cave, was one of the first in the US.  The hotel stayed in the family until 1923 when it was sold to a business group and renamed The Roosevelt Hotel in honor of President Theodore Roosevelt.  It was rebuilt with nearly 800 rooms.  Some of their past guests included Louis Armstrong, Ella Fitzgerald, Marlene Dietrich, Audrey Hepburn, Bob Hope, Ray Charles and more. 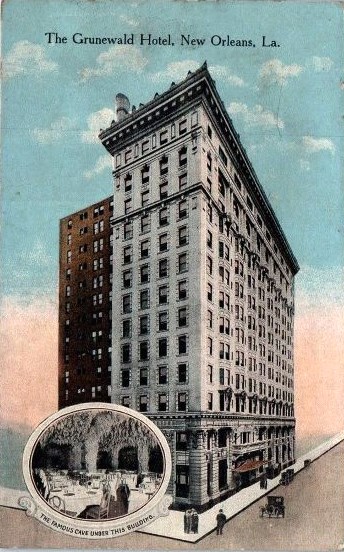 The Roosevelt Hotel is now managed by Waldorf Astoria Hotels & Resorts.  It has had a $145 million renovation since Hurricane Katrina.  Walking in the block-long lobby under the fantastic display of arching lights and shining trees is quite an experience.  Before I could take some pictures we heard a band coming down the lobby.  Yes, it was a second-line parade for the opening of some conference with the attendees walking noisily behind with drinks in their hands.  I took some photos, but because of the large group walking so close the pictures came out blurry. 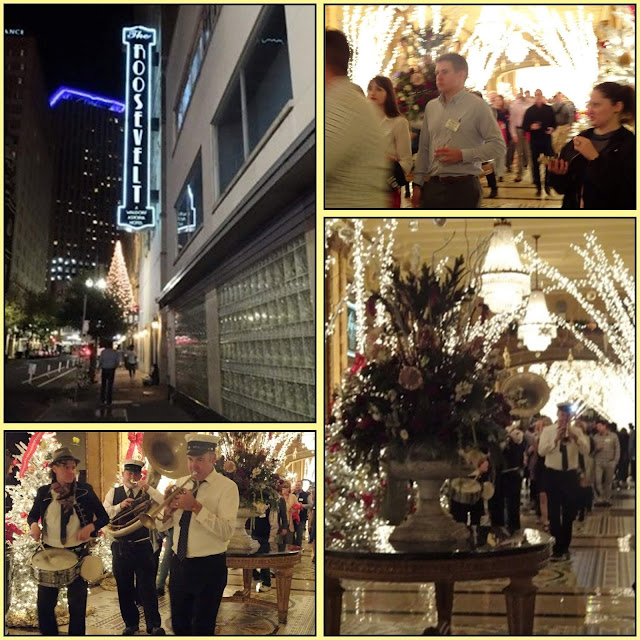 While they passed by we stayed on the side near the classic furnishings.  We had time to look from the mosaics tile floor to the lights in the ceiling as well as the grand piano and paintings on the wall. 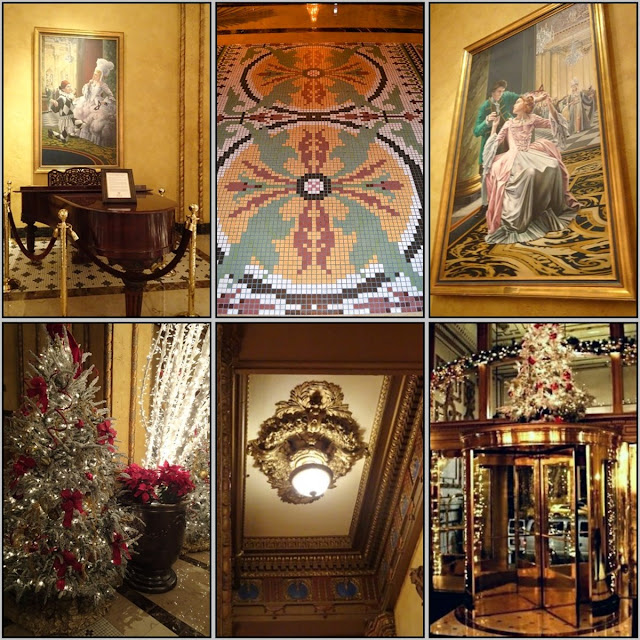 We slowly walked under the trees covered with lights and ornaments.  There has been a Christmas display in the hotel since the 1930s.  It includes 112,000 lights, 1,610 feet of garland, 300 bows and 4,000 glass ornaments decorating 46 Christmas trees and 78 birch trees.  It certainly was stunning!  We ended by the central French clock, called "The Paris Exhibition Clock" crafted by Farcot and Carrier de Belleuse around 1867.  It stands about 10 feet high on a large base carved from solid Algerian onyx.  A bronze sculpture of a robed woman holding a scepter sits on top. 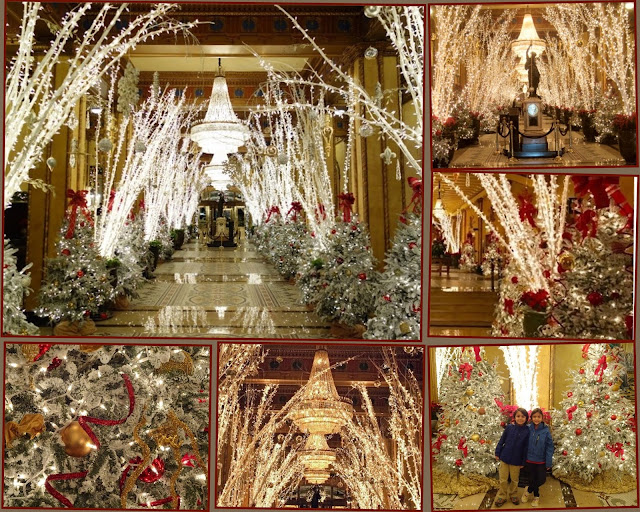 All the glitter, glitz and glamour are back in the Crescent City, as New Orleans is called.  Now I am here in Music City, as Nashville is also called.  No decorations and lights around me, just my faithful Christmas cactus, showing abundant blooms. 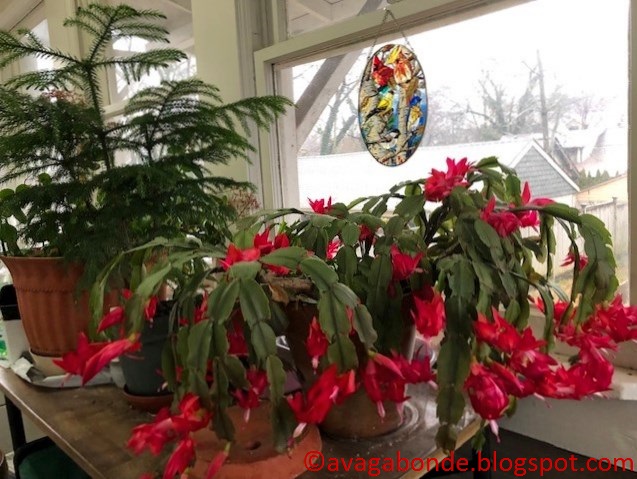 It had been a fun Christmas time in New Orleans, just like Louis Armstrong sings in his 1955 melody.


I wish you all a Merry Christmas, if you celebrate it, and a very Happy New Year. 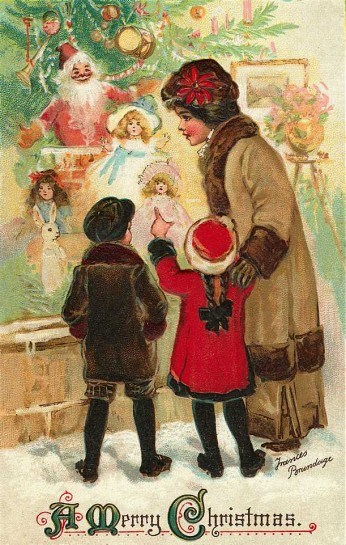 Thank you for yet another beautiful post about a city I will probably never see for myself.
I suspect your Christmas will have some bitter-sweet moments, but wish the very best for you, and a healthy happy New Year to follow.

I so enjoyed this trip to New Orleans, VB. I was there for a Mardi Gras celebration one year long ago, and I remember very little about it. I love the beautiful display at the hotel, all those lights and trees are stunning indeed! I am always pleased to see one of your lovely posts show up in my news feed. Thank you so much for this visual feast. :-)

Dear Vagabonde, thank you for sharing the final days of your New Orleans visit with us. I've never traveled much nor been in any magnificent hotels like the two you share with us here. So much history and beauty. I really appreciate your telling us who stayed in the two hotels. It sounds as if writers liked one, and movie stars the other!

And thank you, too, for the holiday greetings. This Christmas I suspect will be difficult for you as the holidays always are, I understand, when we lose those we love so deeply. Those with whom our lives and our traditions are entwined. I hope your memories will comfort you now and that the carol music of the season will ooze into your heart and bring comfort. Peace.

Hi Vagabonde, Beautiful Christmas/New Orleans photo...and history too! The last time we visited NOLA was just before Christmas as well. Very pretty time (and comfortable) down there. Wishing you and yours a very Merry Christmas and a Happy, Healthy New Year. Take Care, Big Daddy Dave

I had no idea so much can be going on in one place. I think I would love all of that activity as would Buddy.M
Happy holidays to you.

That glitter and glamour looks amazing. I have be thinking of you this Christmas. Sarah x

Beautiful photos -- NOLA looks like a fabulous spot at Christmas, that's for sure.

Sending you late holiday wishes and thanks for your lovely card. I hope that Christmas wasn't too hard this year. Hugs across the miles.

New Orleans is a city that I would love to visit, especially at Christmastime. Perhaps one day, but for now I will enjoy the photos of your time spent there. I hope you enjoyed your time with your family at Christmas, and I am wishing you all the best for 2019. It will certainly be a different life for you now.

New Orleans should put you on salary as an ambassador! I love the second lining!