Return to New Orleans - The Tricentennial and the Gallier House 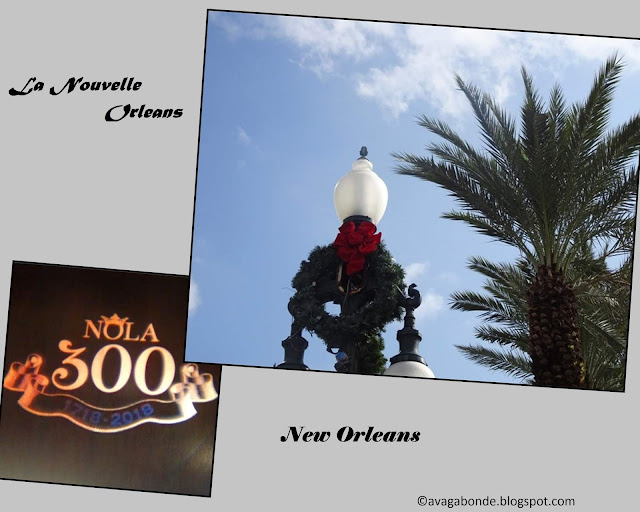 Last August my daughter, who was going to attend a week's conference in New Orleans at the end of November-beginning of December, asked me if I would like to come along.  I refused because I did not want to be away from my husband that long as his health was declining.  She insisted saying that I needed to get some respite from my care giving.  I did buy a flight ticket for a 4 days stay, thinking I could always cancel the trip.  But then my husband passed away in early October, so on Friday November 30, 2018, I flew to New Orleans, one of my favorite cities.  This year New Orleans, or NOLA as it is called for short (New Orleans Louisiana) celebrated its 300th birthday since it was established by France in spring 1718 as La Nouvelle-Orléans. 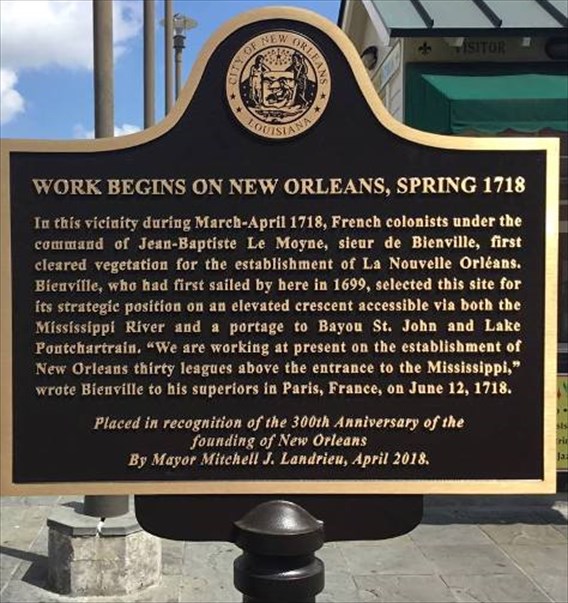 I have been to New Orleans numerous times and have written several posts on it.  In those earlier posts I gave some of the history of the city and state, see The Ambiance in New Orleans written in 2012 and Riding the Train Called The City of New Orleans, part 1 and part 2, or check all the entries under New Orleans on the side of my blog.  To mark its 300th Anniversary New Orleans has had a yearlong series of unique events, festivals, restorations, improvements and more. 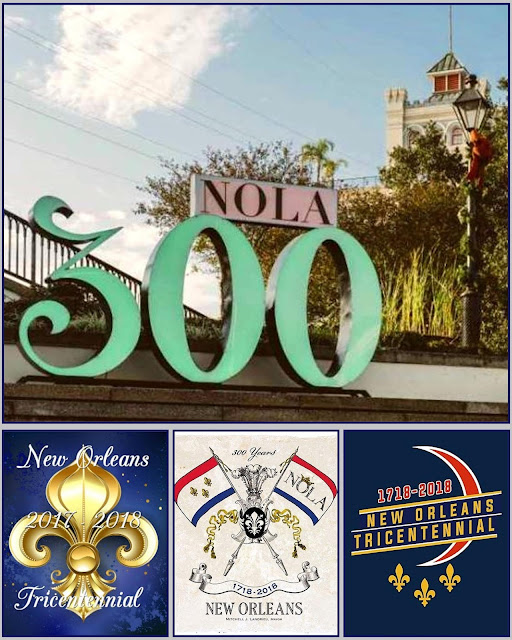 Some of the events included massive projects such as a brand-new airport terminal, expanding the streetcar line, a dog parade, but the one event I would have liked to attend was in mid-November called "Fête des Fromages." This festival, hosted by the French-American Chamber of Commerce, celebrated French cheeses, wine and music.  It also offered cheeses from Vermont to California and Switzerland.  There was a market where one could buy cheese, and chefs' demonstrations and seminars.  (Photos courtesy The Times-Picayune.) 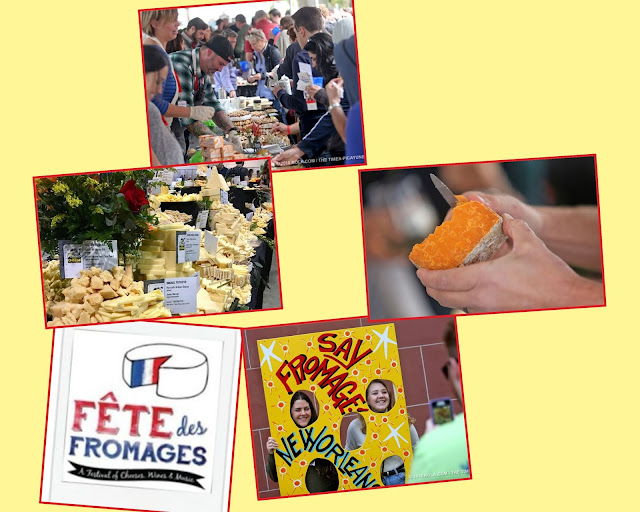 Saturday morning, December 1, 2018, was very sunny.  Looking from our hotel window I could see the streetcar below on Canal Street and decided to take it to the French Quarter.  The last time I was in New Orleans with my husband we were going to visit the historic Gallier House but it was closed that day so I thought I would visit it this time. 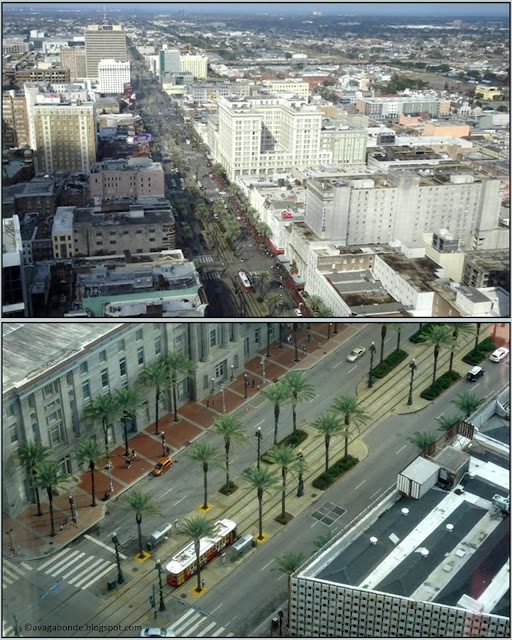 I hopped on the red Riverfront Line streetcar (44 cents for a senior) that runs along the Mississippi River, went by the statue "Monument to the Immigrant" by Italian sculptor Franco Alessandrini, and got off at the French Market stop, the oldest public market in the US.  Then I took my time to walk up the four blocks to the Gallier House.  New Orleans is not a classic US town, it's an old city with a melting of cultures: French, Spanish, Native Americans and African-Americans.  It is reflected in its architecture.  It is a city made for walking, strolling and stopping but not for being in a hurry.  I had only brought my little Sony camera as my Nikon is heavy (my husband used to be the one carrying it) and I stopped often to take pictures, usually looking up to the ornate balconies. 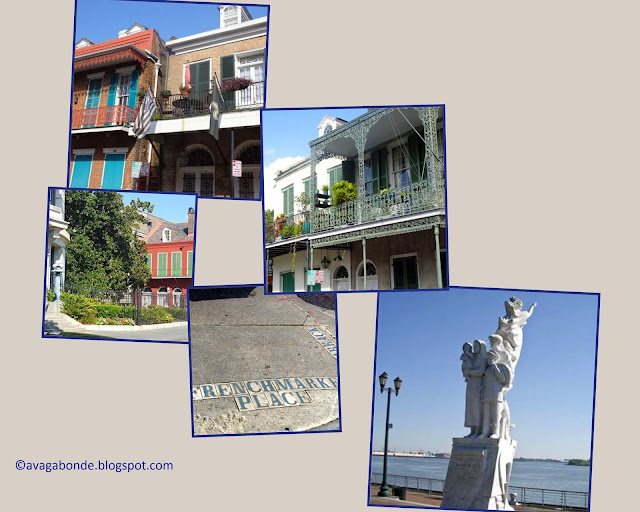 One of the large scale projects for the NOLA tricentennial was the restoration of Gallier Hall.  James Gallier, Sr., was the architect who designed this Greek Revival building in the mid-1800s.  It was dedicated on May 10, 1853.  It was NOLA City Hall until 1956, and is used now for special events.  The wife of NOLA Mayor Mitch Landrieu, Cheryl Landrieu, helped raise $3 million in private donations to pay for the interior restoration (under budget as the work was estimated to come to $5 million.)  Below is Gallier Hall in the mid-1800s, and in a vintage postcard.  The restoration photos are courtesy The Advocate.  (Click on collage to enlarge.) 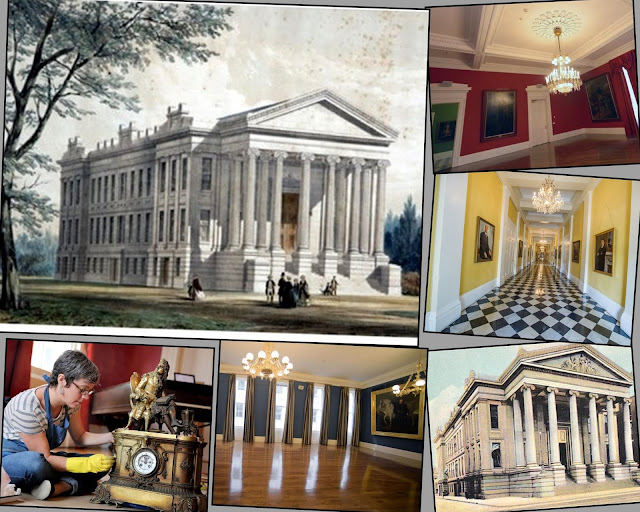 James Gallier, Sr. (1798-1866) was a prominent New Orleans architect.  Actually he was born in Scotland under the name Gallagher but changed it to a French name after moving to New Orleans.  He had his family residence built on Royal Street in the Vieux Carré  (The French Quarter) in the 1860s but he and his wife died in 1866 while on board the paddle-wheel steamer The Evening Star on a journey from New York to New Orleans.  A hurricane sank the ship off the coast of Savannah, Georgia, and only 6 passengers survived out of the 250.  His New Orleans house passed on to his son James Gallier, Jr. (1827-1868,) who was also a successful architect.  The two-storied Creole Townhouse stayed in the family until 1917; now it is owned and operated by the non-profit Woman's Exchange.  It is a National Historic Landmark.  This house museum is furnished in the style of the 1850s and is rated by the New York Times as one of the country's top house museums.  The tour started in the double parlor filled with antiques, period objects and art. 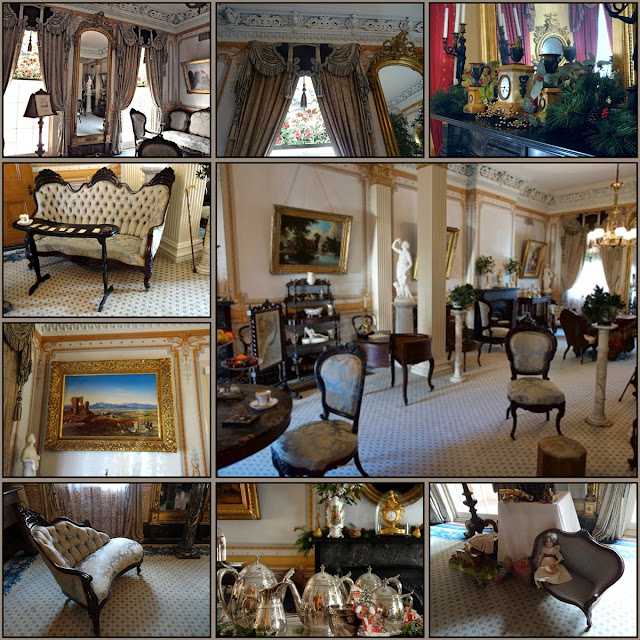 On the second row, on the left below, is a metamorphic desk.  This was an ingenious Victorian furniture invention - a table that opened up to reveal a chair. 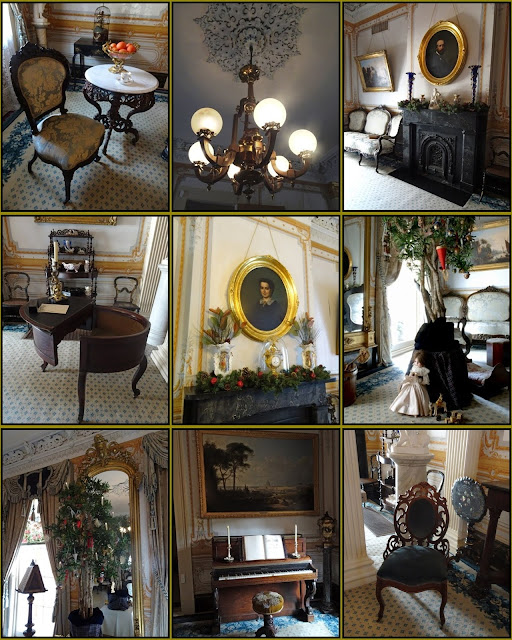 As an eminent architect, James Gallier, Jr., included the latest innovations and style in his townhouse (then he would add them to his clients' future houses.)  His office/library on the second floor had a double skylight in the ceiling to help ventilation and provide light. 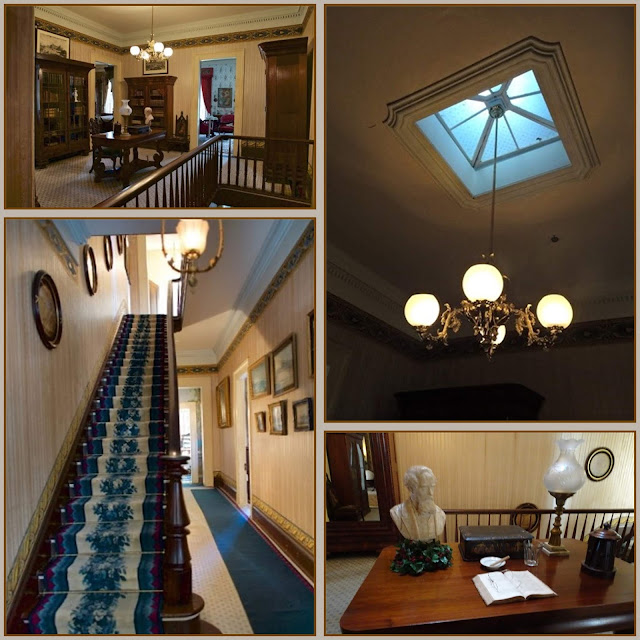 The bedrooms had elegant period furniture.  It was one of the first houses in the city to have indoor plumbing and an indoor "bathing room" with porcelain, a copper-plated bathtub with running cold and hot water and a wood flushing toilet. 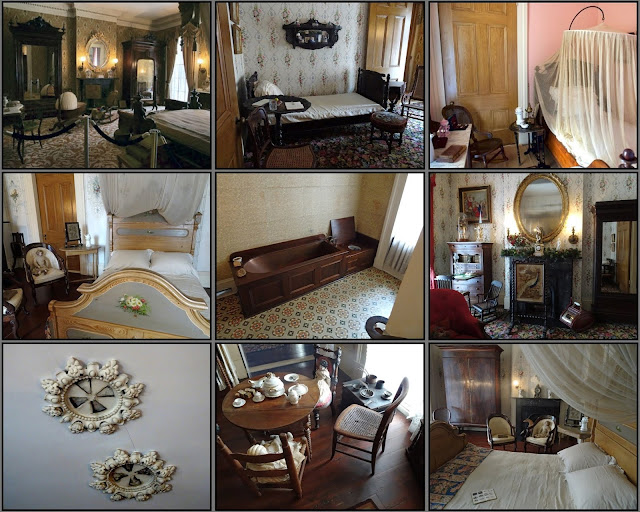 On the bottom right hand side in collage below you can see a door opening to the back gallery.  The gallery on the left was the slave quarters.  There were 4 enslaved people working for the house; most stayed on after the Civil War as paid servants. 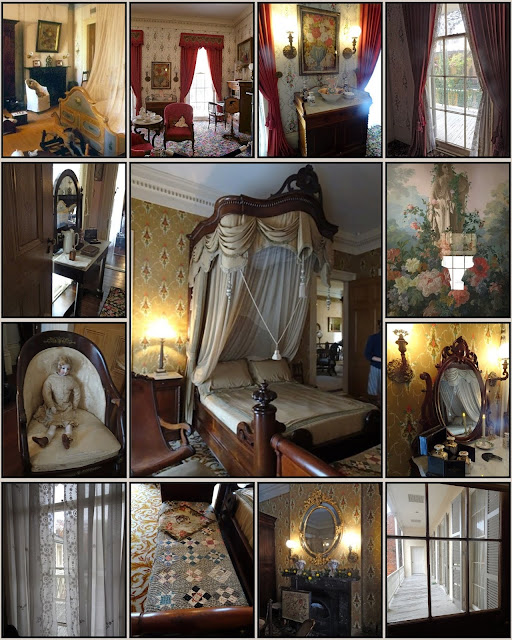 We toured one of their bedrooms.  The guide explained that the bath tub shown in the room would have been used in the kitchen rather than the bedroom. 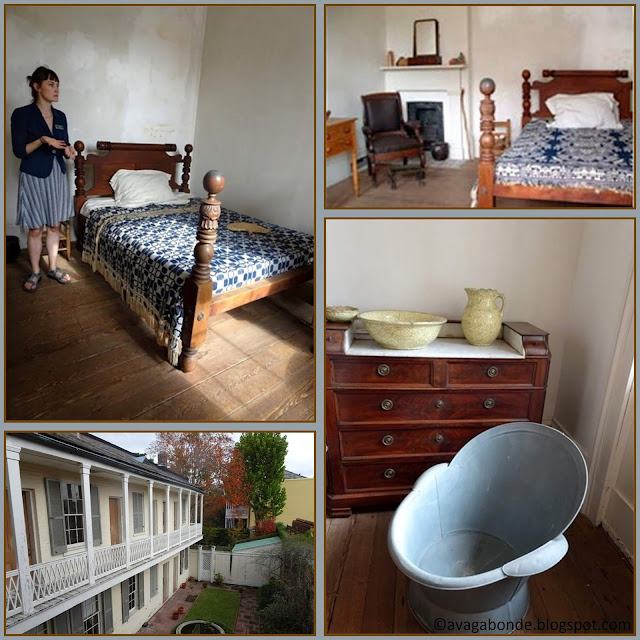 We went back downstairs to the dining room. 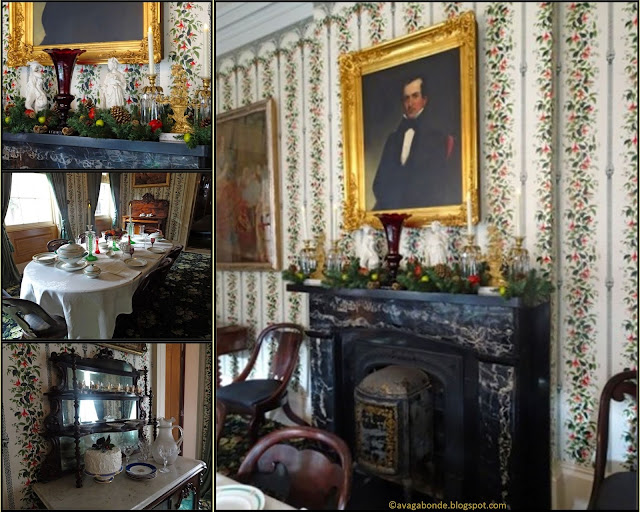 Then we looked at the modern (for that era) kitchen.  It had a copper water heater and a ventilated coal-burning stove providing heating for the water system. 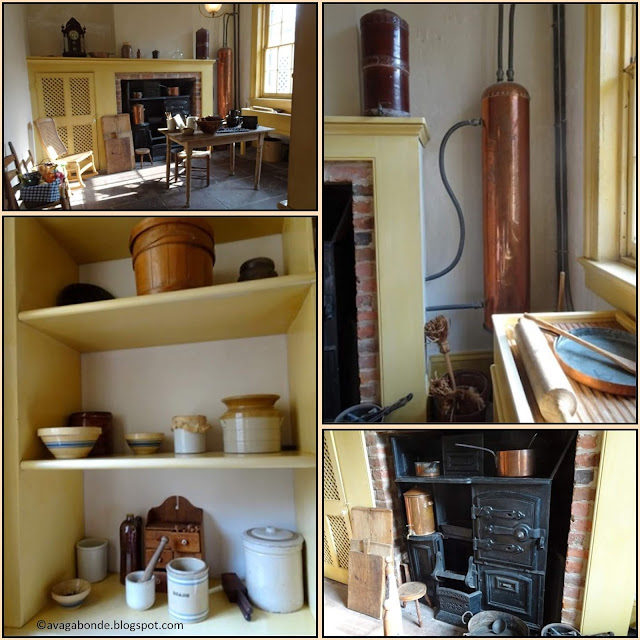 The picture in the center of the collage below is a sugar cone loaf.  Sugar was expensive and was added sparingly to hot beverages.  A portion would be broken off from the loaf with strong "sugar nippers."  It would be then ground down in a mortar and pestle. 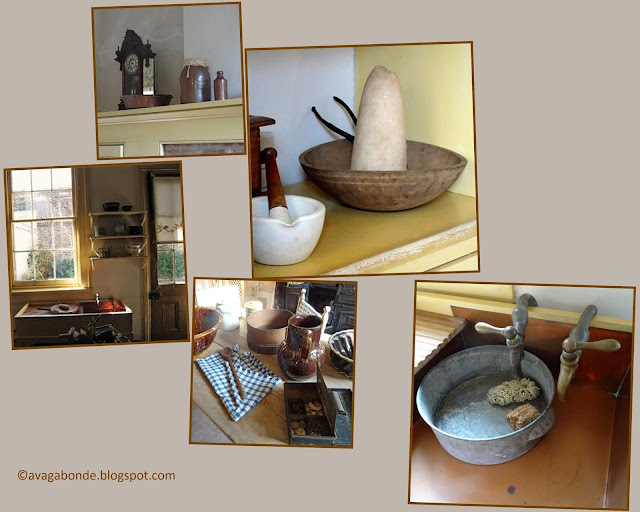 The tour ended in the interior courtyard. 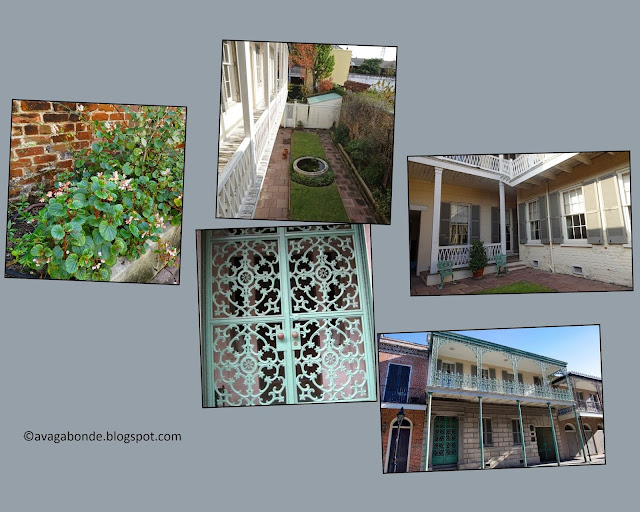 I enjoy visiting historic houses and this one was beautiful.  It gave a fascinating glimpse of the New Orleans of that bygone period.  The Woman's Exchange owns another historic house museum but it is several blocks away, so I decided to visit it another day.  It was quite warm - 81 F (27C) and time to stop and have a cool drink.  Farther on, still on Royal Street, I found CC's Coffee shop.  It felt good to sit down and sip a frozen coffee (with whipped cream and a Peruvian brownie ...) while reading more on the 300th Anniversary of New Orleans. 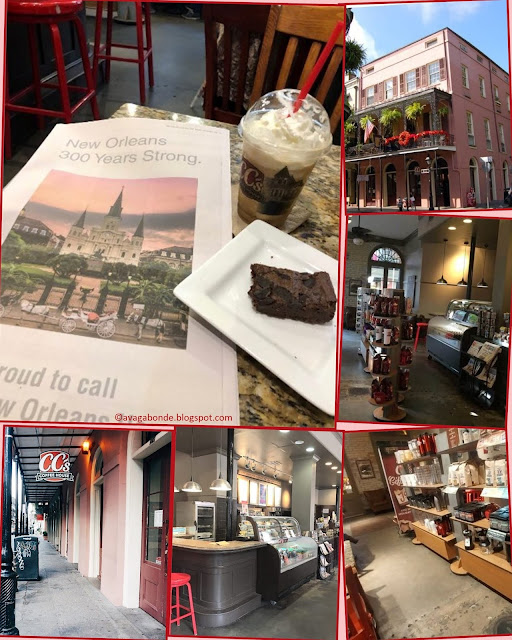 Hi Vagabonde, About 3 years ago we spent a week in New Orleans with our adopted daughter. We walked, walked and walked! Covered the French Quarter and the beautiful homes out along St. Charles Ave. I ensured that we took a ride on every NOLA trolley line too! We missed the Gallier House although we did tour 2 or 3 very fine historic homes. We would have loved to go to that cheese and wine festival! One big attraction for us in NOLA is the WWII museum. I give them a little money every year and my dad is among the many memorialized there. He's buried in France having been KIA a day before the armistice in Europe. Take Care, Big Daddy Dave

What a wonderful outing - for you and for us.
I am, as always, incredibly grateful for the images and the detail you give us.

I enjoyed 'your' Gallier Hall tour very much, dear Vagabonde!
Thank you for sharing all these beautiful pictures and information!

I have always wanted to go to New Orleans. You gave us a nice tour with this post. I hope you have peaceful holidays.

Thank you for this wonderful tour. Rather fancy visiting this city after watching NCIS NOLA!

What a beautiful home you shared with me here. I love all the detail (which is your usual method) and could almost put myself in there, too. I am glad you are now able to walk such distances. Thank you so much for sharing this lovely visit. :-)

Dear Vagabonde, thank you for this tour--for both the historical background and the photographs that permit us to see not only the furniture but also the paintings and other items on table tops and floors. I'd love to see this museum.

I went to a museum in Winston-Salem North Carolina that featured the furniture made by North Carolingian wood makers from about 1640 up to 1860. Each room represented a different decade and in each room was a bouquet of dried flowers done by artisans in Appalachia. I"ve never forgotten that museum, which I visited back in 1971. So 47 years ago. I'd so like to visit this one also.

You are so gifted in your ability to make places and events come alive for your readers. Thank you. May these days of Advent and Christmas and New Year bring you a contentment that warms your heart. Peace.

Never having visited New Orleans, your photos and descriptions of the city and the Gallier House have whetted my appetite to pay a visit there one day.

I'm so glad your daughter had urged you to get the ticket. She was right, of course, about needing the respite then. But perhaps you needed it all the more now, and so nice to be traveling with her. The places you visited were really beautiful and what fabulous photos you got. You always do share the best info about any spot.

Thinking of you always but especially this first Christmas and hope your heart is healing. It takes awhile. Hold those memories close, all the good ones, all the happiest. Sending hugs across a few state borders to you.

Dear Vagabonde,
I liked this virtual tour with you, I think NOLA deserves to come there and to see it. Although you have had your knee operation you have been able to walk along the street, to take pictures in museum, wow. I see the museum is very interesting I do love to learn history and architecture.
Thanks for sharing!

Hi my friend! So good to hear from you! I hope you're doing ok! I'm so happy you went to New Orleans! Thank you for sharing all the photos! I truly loved it all! Big Hugs and Much Love!