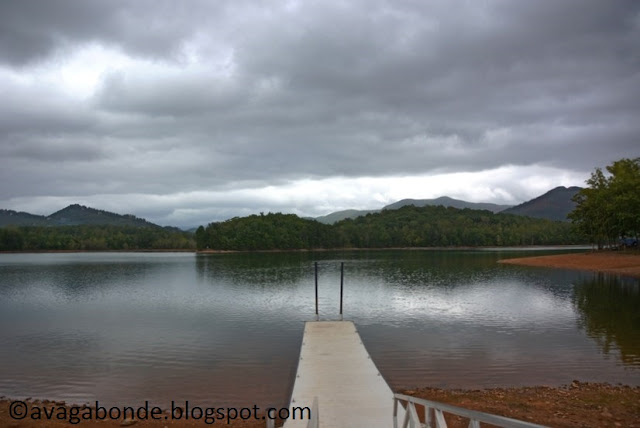 Driving to and around the Western North Carolina and North Georgia mountains was a nice break from working in the Georgia house.  I was surprised that it took less than 2 hours to drive from the GA house (greater Atlanta) to Brasstown, North Carolina, where I went to the John C. Campbell Folk School Fall Festival last week-end.  I took many pictures and will have a post on the event soon.  I stayed in Murphy, NC, an old town established in 1830.  It is the county seat of Cherokee County, located in the heart of the Appalachian Mountains.  In Cherokee County, NC, apart from the mountains, hills and hollows there are lakes, forests, streams, farm land and 6,000 acres owned by the Eastern Band of Cherokee Indians.  Their land is part of the Qualla Boundary and not a reservation.  The Eastern Band of Cherokee own a small casino in Murphy called Harrah's Cherokee Valley River Resort and Casino.  I did not visit it though. 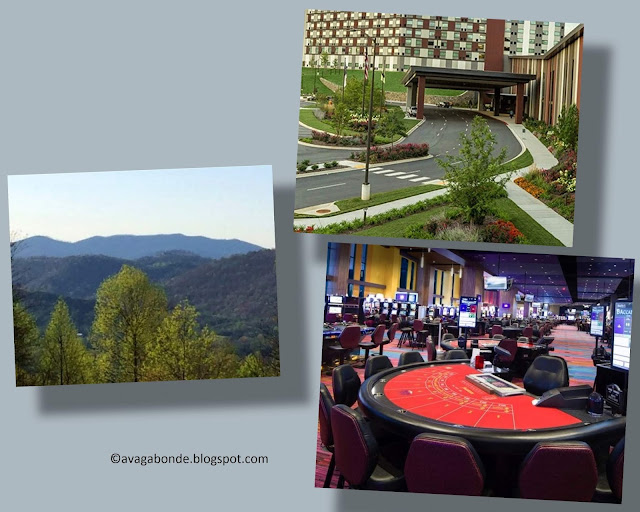 It was a bit overcast and much cooler than in Nashville or Atlanta, but it did not rain.  On Monday I left Murphy, NC, and drove down Highway 64 to the GA Mountains then Highway 69, around Lake Chatuge, to Hiawassee, GA.  These were little mountain roads, quite curvy as you can see from the maps below.  (Click on collage to enlarge.) 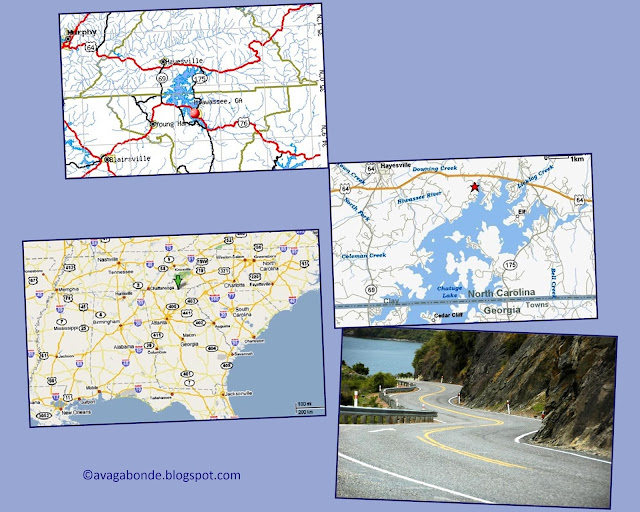 In 1942 the Tennessee Valley Authority (TVA) built Lake Chatuge for flood control and power generation for the Blue Ridge Smoky Mountains region.  This lake consists of 3,700 acres on the North Carolina side and 3,500 acres on the Georgia side.  The beauty of this area brings many tourists and sport enthusiasts for boating, hiking trails, fishing, swimming, camping, etc.  I drove slowly to look at the gorgeous scenery rolling by as it was difficult, or even hazardous, to stop to take photos.  Below is a vintage postcard of Lake Chatuge. 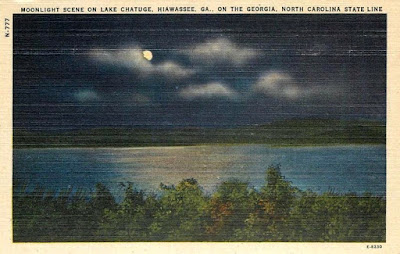 Lake Chatuge is nestled between the mountain ranges of Nantahala National Forest on the NC section and embraced by the peaks of the Chattahoochee National Forest on the GA side.  As I drove up and down the small mountain roads I could get glimpses of the lake below and the top of mountains.  Trees were still green, just turning gold.  Peak fall foliage will not begin until the end of October to the second week of November. 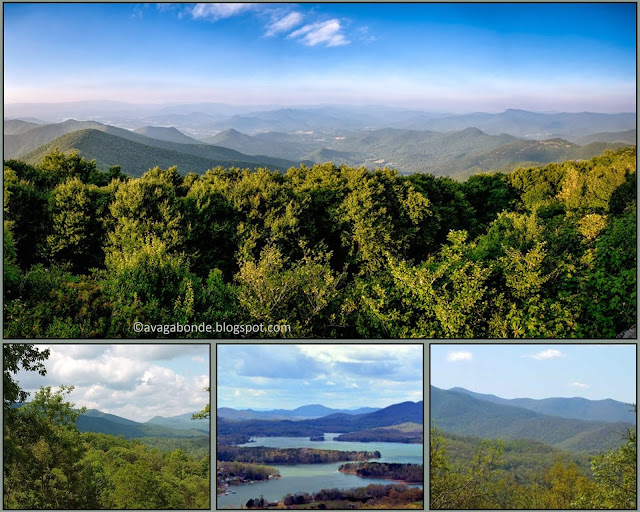 I kept zigzagging down the scenic roads toward Hiawassee, Georgia.  Again, I could not stop for photos, so below are some vintage postcards of the area. 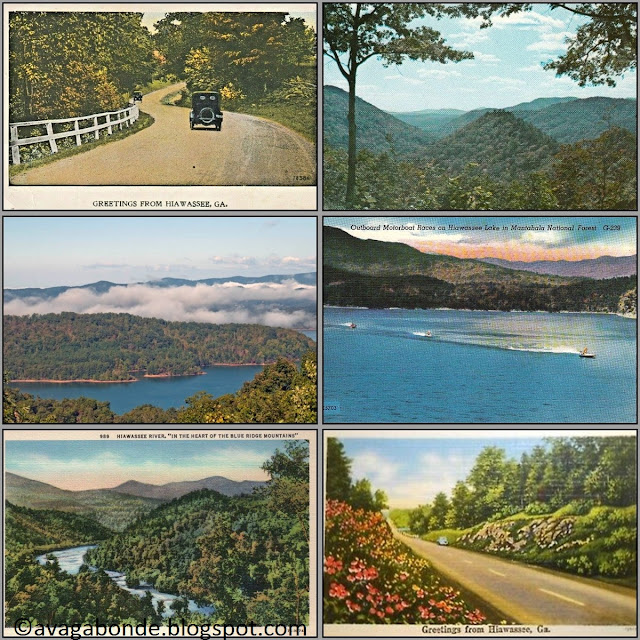 Early for lunch with my friend, I stopped in the center of Hiawassee to walk around.  There were flowers everywhere.  I parked near the public library, and went inside to have a look.  I should not have, as they had a sale rack and for 50 cents I bought a novel from Mary Wesley, a British author I enjoy.  The local park was being decorated for Halloween. 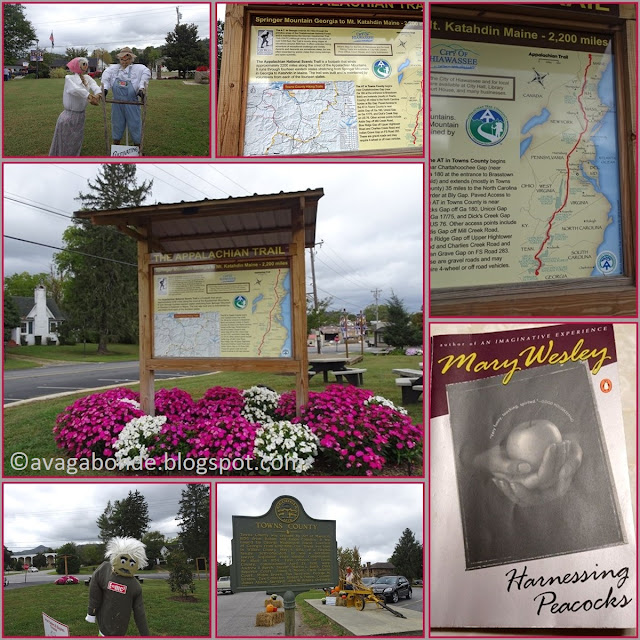 To get a closer look at the lake I drove to the Georgia Mountain Fairgrounds, less than a mile away.  I wish I could stay there until next Saturday when the Fall Festival starts and lasts all week long, ending on Saturday October 19, 2019, with the Fiddler's Convention (bluegrass bands, finger style guitar, flat picking guitar, banjo and mandolin.)  During the week well-known entertainers will perform such as The Gatlin Brothers, Ronnie McDowell, Crystal Gayle, The Earls of Leicester and more.  I enjoy listening to bluegrass music.  Below is a sample by Jerry Douglas and The Earls of Leicester.

There was hardly anyone by the lake.  It was quite overcast but still impressive. 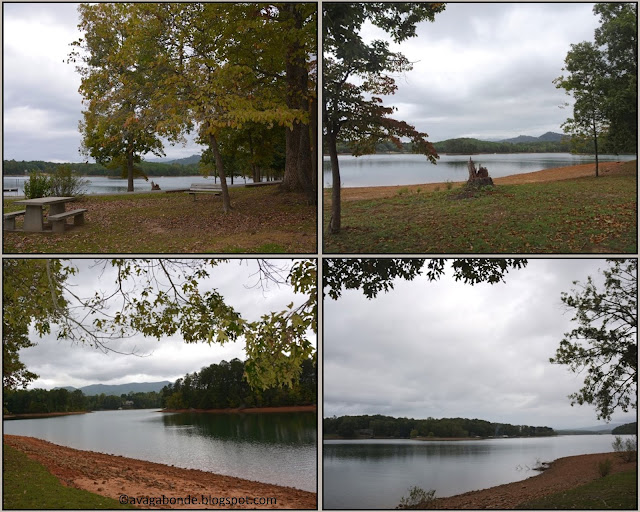 I sat on a bench for a while to absorb the surroundings.  Then walking up by a knotted tree trunk I saw a bunch of feathers ahead.  Getting closer it appeared to me that a bird had lost a vigorous fight. 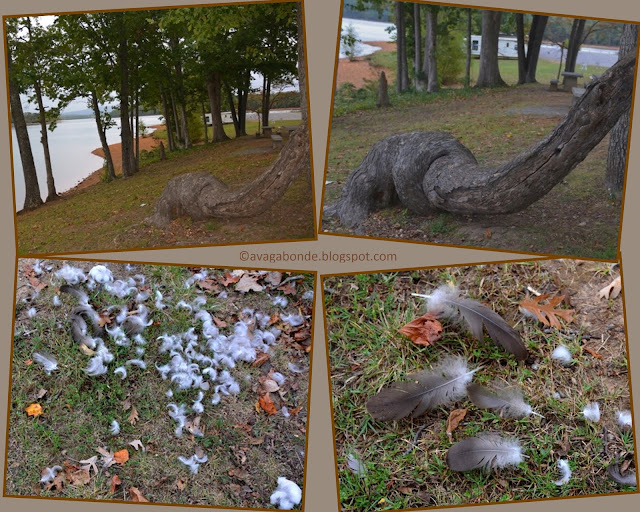 Before leaving I walked to the deck to look at the lake up close. 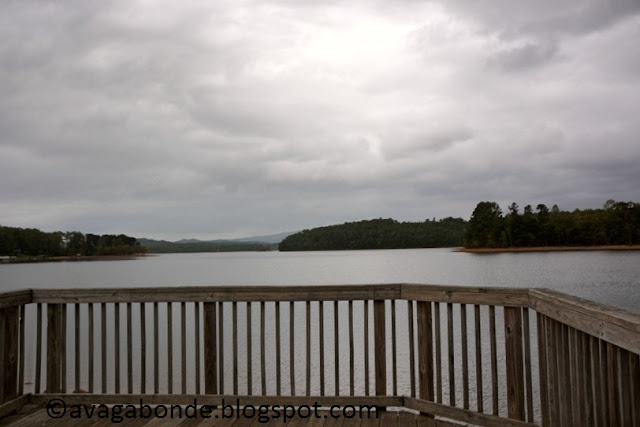 I have been to Hiawassee several times to visit my friend and have seen it grow from a sleepy mountain town to a tourist destination and a retirement niche of upscale homes with spectacular views.  Originally it was inhabited by Cherokee Indian tribes.  Its name comes from the Cherokee word Ayuhwasi which means "meadow."  My friend is originally from Lausanne, Switzerland, a city I also visited a couple of times.  I guess it was easy settling near Lake Chatuge and the surrounding mountains as it would be a reminder of Lausanne by Lake Leman.  The lake is called Leman on the French side and separates France from Switzerland; it is called Lake Geneva on the Swiss side. 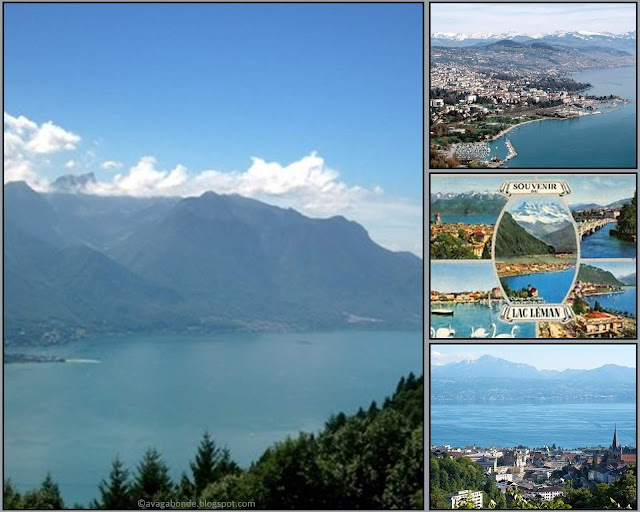 My friend started by building a small house by the lake and along the years it was enlarged several times.  Now it looks like a Mediterranean villa.  The interior looks European, a mixture of Swiss, French and German styles (not the white only decor that American decorators think is the French style...) He added a swimming pool not long ago. 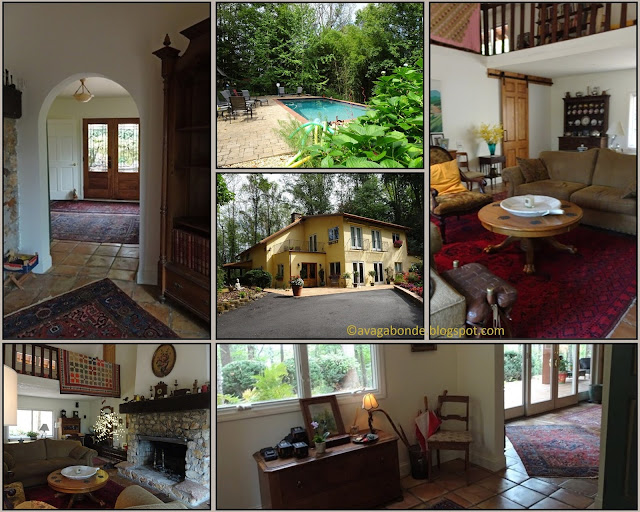 But it was getting late and I had to go and still ascend and descend the curvy mountains roads to my next stop. 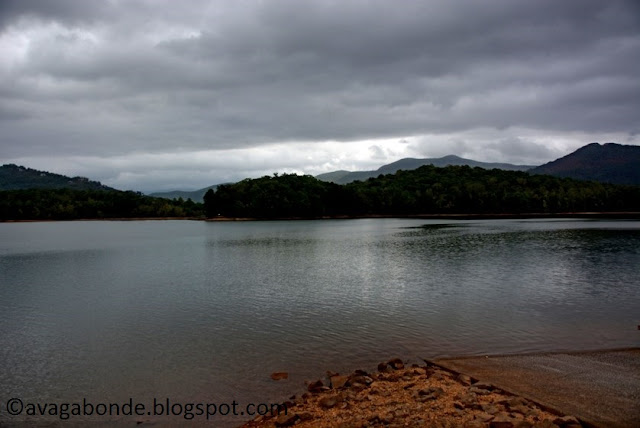 I had enjoyed our visit, talking about fun times in the early 1970s and subsequent years.  Having old friends is such a joy.  We talk about our youth, our earlier lives; a particular moment ... Old friends are like a testimony of a time that we may regret but that still subsists a little, thanks to them.  We may find it easy with old friends to mourn an epoch that is no more, but then we can go on and be grateful for our present lives and to still know each other.  Don't you feel that way about old friends? 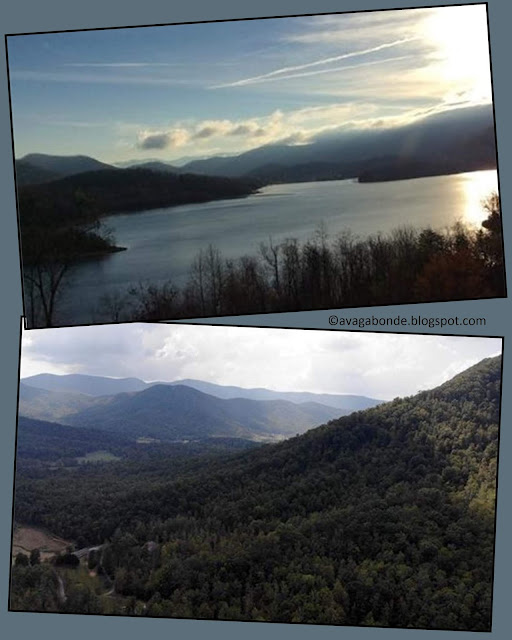 How very, very beautiful (except of course for the vaniquished bird). Thank you so much for taking us with you. (I really like Mary Wesley's novels too).
You are lucky to have old friends. Most of mine have gone.

Very beautiful indeed. I know what you mean about having old friends. I don't see them much any more, but when I see them it's always a pleasure. Thank you so much for the lovely trip and all the pictures, both old and new. :-)

I thoroughly enjoyed this! My son moved to Raleigh recently ... I am looking forward to exploring NC.

What a wonderful post! And I am aware of all the great artist that perform in Hiawassee! I am always wishing I could go! The lake is lovely and I love to go to the top of Brasstown Bald and look down upon it too! Your friend's house is gorgeous. Thanks for sharing the post card views also!

Exactly how I feel about old friends. This looks like such beautiful territory -- I can see why you stopped and took many photos. I think I would have loved that festival too. I do love bluegrass!

Hi Vagabonde, We've never explored north Georgia except along US 411 although we keep talking about it. I even have an old friend living in Big Canoe but we keep having a hard time scheduling a visit as they are supporting an older parent and a divorced child with her own children. We have been to Murphy and other part of the NC and SC mountains as well as parts of the Nantahala National Forest. It's beautiful country but then again so is our side of mountains. We too love the back roads...our favorite way to travel...albeit slow. As for old friends, visiting with them is great...once we get past catching up on our latest medical conditions! Take Care, Big Daddy Dave

i enjoyed sharing the trip through this post and through your accompanying photos as well. Thanks for taking us along. Your friend's home is indeed quite lovely too. Thanks also for your recent comment on my blog post, please feel free to bre-visit anytime and I will do the same. If it's OK with you, I would like to post your blog on my blog list and other bloggers may enjoy a visit as well.

Dear Vagabonde,
You are absolutely right when speaking of old friends - you can recall the past years with them, but there are less and less old friends. I liked the photos of the lake Chatuge, wonderful nature! Your pictures show early autumn with red colors. There is a stunning photo of the woods and mountains on your 4th collage.
Thanks for such interesting virtual trip with you!

What a beautiful drive! It does look like a lovely spot to live in retirement, though my needs (and desires and resources lol) are much more modest than that area seems to support :)

Mary Wesley. I always thought she wrote the one about the fox. But no, Wiki says "one of Britain's most successful novelists, selling three million copies of her books, including ten bestsellers in the last twenty years of her life." How did I contrive to miss her? The fact is I've missed many authors, usually through indefensible prejudice.

And there's one significant detail I should have paid attention to. She died of gout and I am a fellow sufferer. Our lives overlapped by at least sixty years: did the poor thing never learn about allopurinol? Oh I ache on her behalf. I doubt I'd be writing to you now had it not been for that wonder drug.