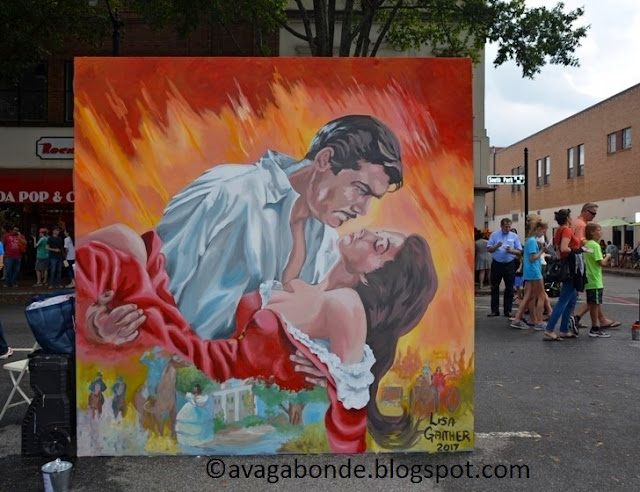 My trip to the Western North Carolina Mountains was to be my next post, but something came up.  I realized it was the weekend for the Chalk Festival on the Marietta Square.  If you go to the side of my blog and click on the chalk art festival category you can read on the earlier festivals I have attended in Marietta, GA, since 2013.  I also give more information on this event.  I missed the 2018 fest but was in Georgia for the weekend of the fest in 2017.  I never wrote a post on it though.  I'll start with the 2017 Chalktoberfest.  I had arrived from Nashville on the Saturday night and went to the fest on Sunday October 15, 2017.  From the parking area I walked first by the vintage automobile show. 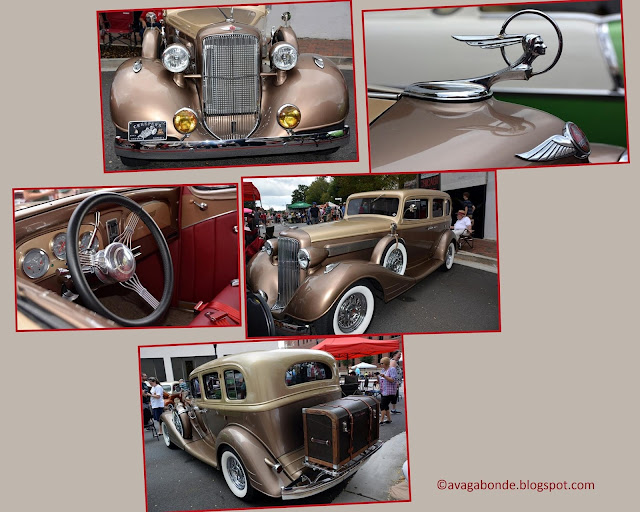 The Marietta Police gave choices for a ride to those who had a few drinks, and their costs - (click on collage twice to enlarge.) 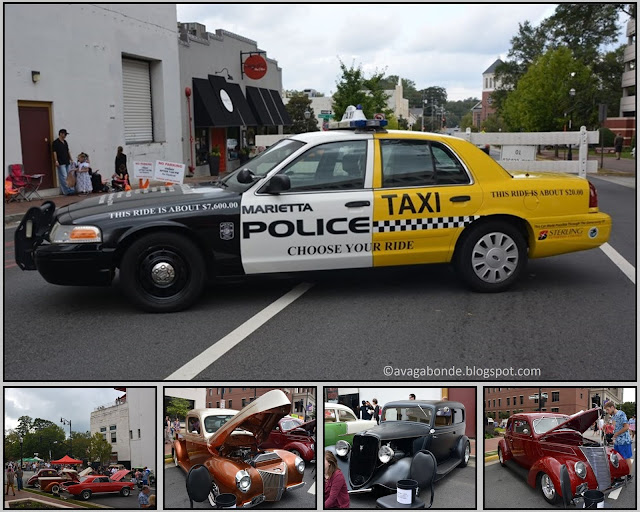 The chalk paintings had been drawn on the four streets around the Marietta Square.  But some artists had drawn theirs on standing boards as shown in the heading photo and those below. 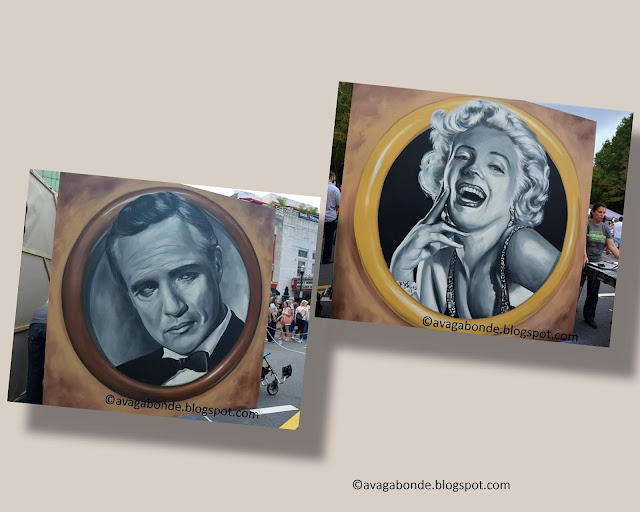 There were ominous clouds starting to gather over the square and soon enough large drops of rain began falling.  Big rolls of plastic sheeting placed in the center of each street were quickly rolled over the chalk drawings. 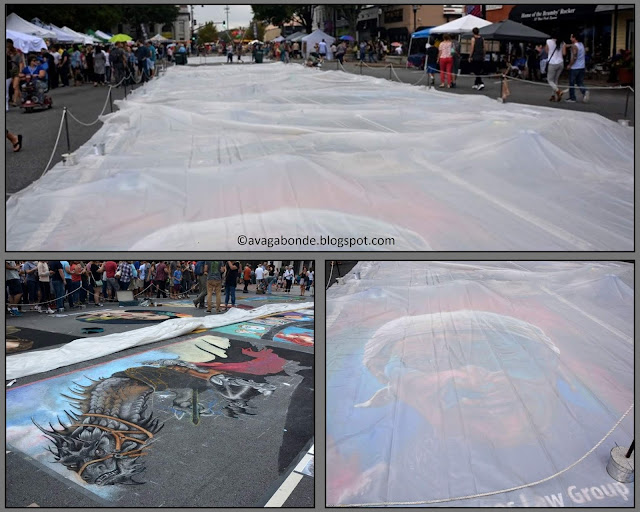 But the rain did not last long.  The clouds were pushed away by the sun and we all came back to the streets.  A man with a blower was pressing the water past the plastic sheets. 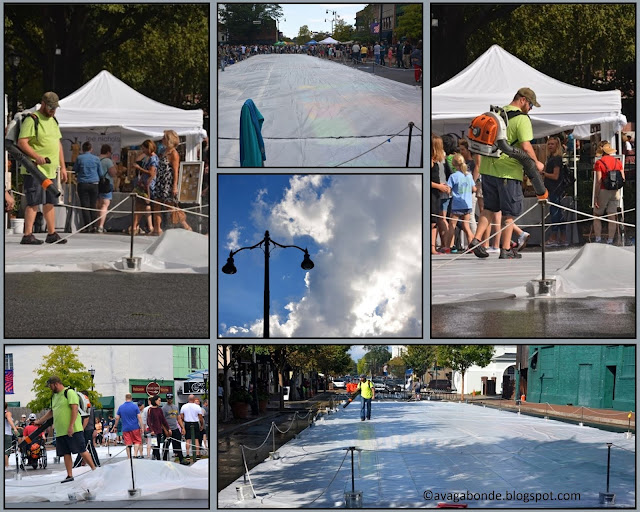 I was pleased to go back to the street paintings as I had only taken a couple of photos so far. 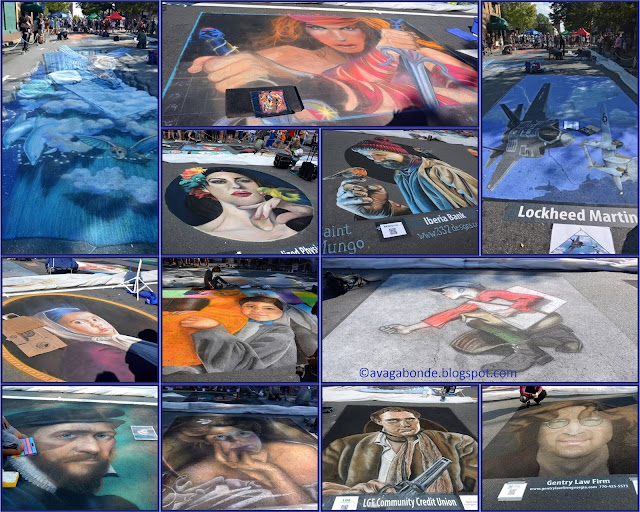 As usual many people had brought their dogs.  I love dogs but don't have one, so I always stop to look at them.  Of course taking pictures of dogs means that legs and feet of their owners are included in the pictures! 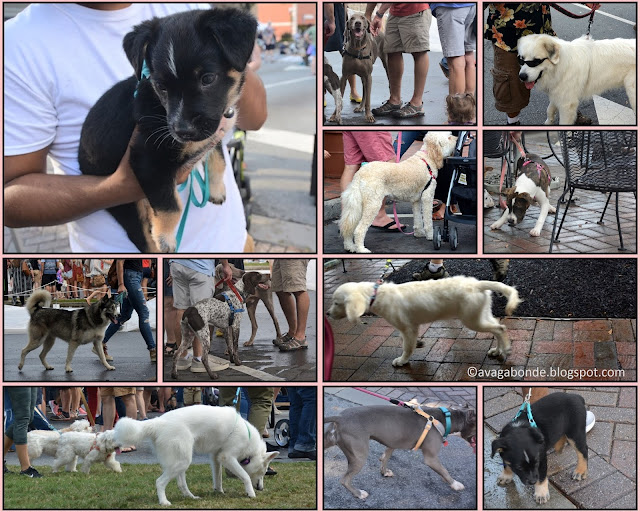 Photos taken from ground level are distorted.  I asked the Marietta City Photographer to use my camera on his ladder and you can tell the difference below. 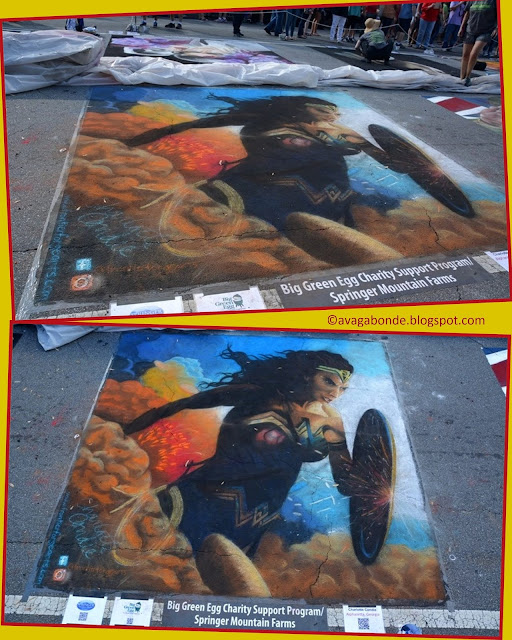 Even with the distortion these large-scale chalk drawings were dazzling. 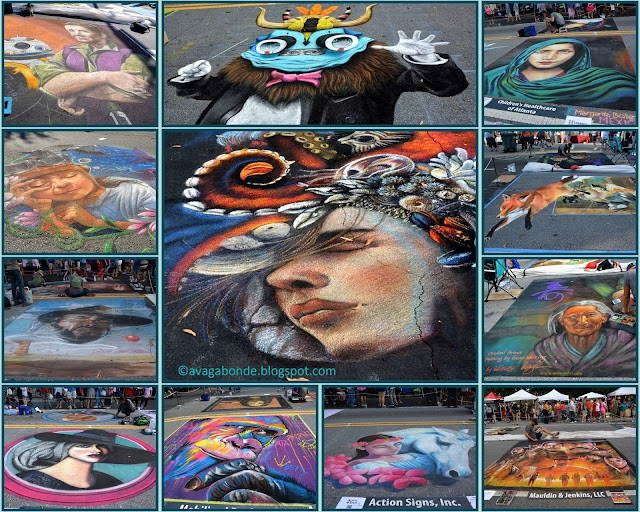 I also enjoyed watching the artists creating these masterpieces on the pavement. 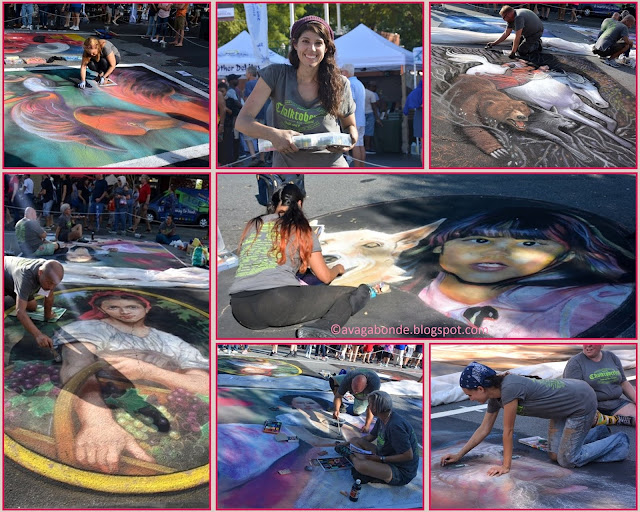 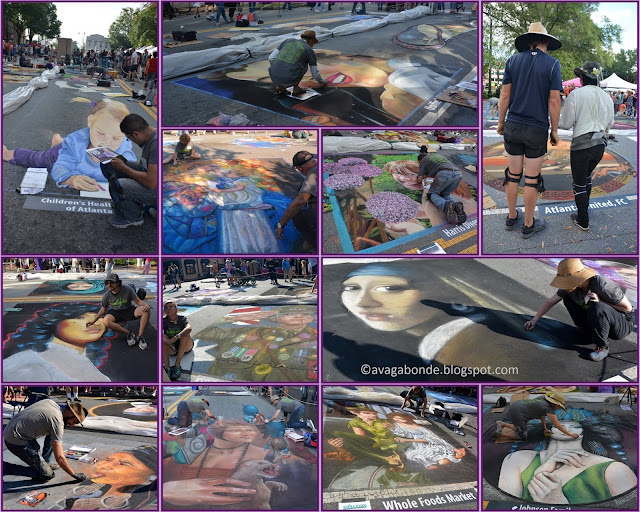 Their panoply of colorful chalks tempted my camera as well. 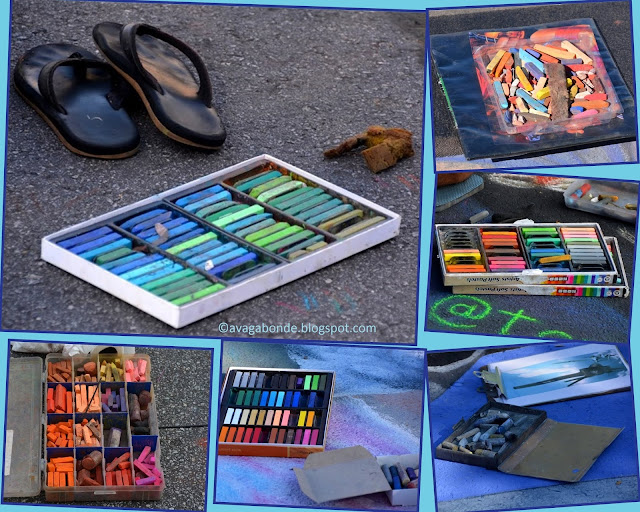 As its name indicates the Chalktoberfest takes place in October when Halloween is coming up as shown by the decorations on the square. 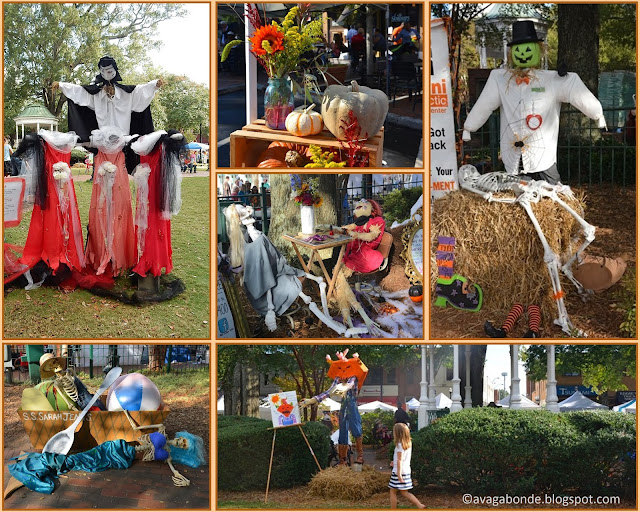 We even had a zombie-looking bride and groom walk by. 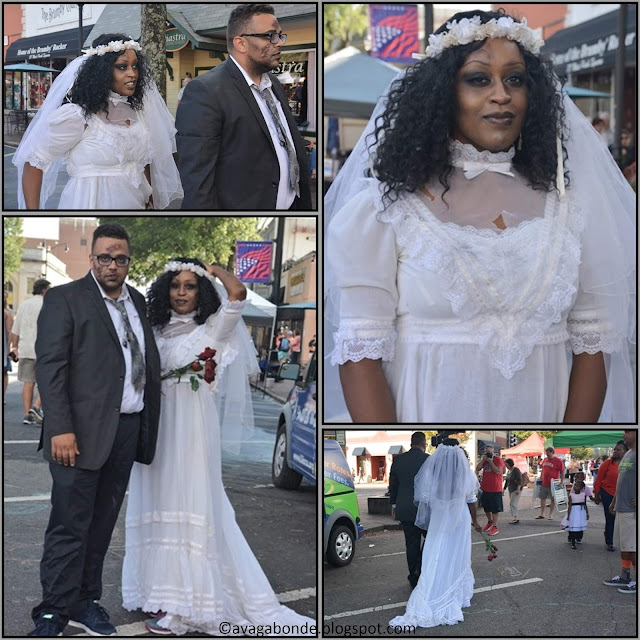 But there were more colorful chalk interpretations to see. 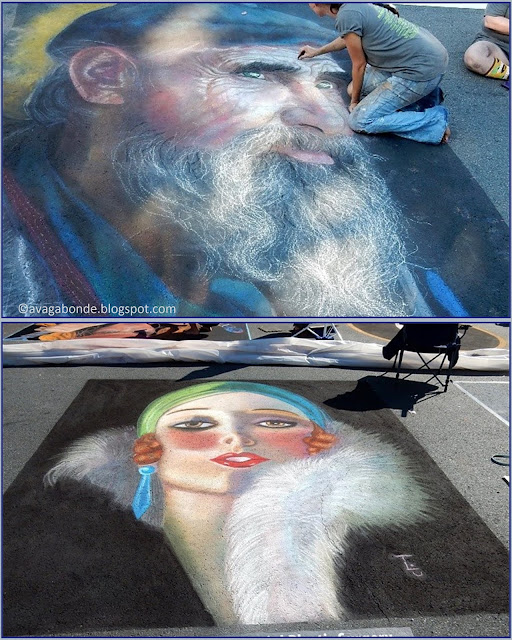 and more - (don't forget to click twice on collages to enlarge and see better.) 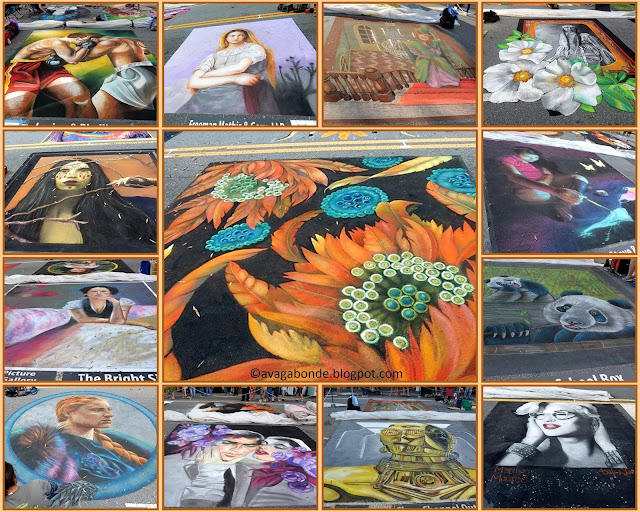 One of the chalk artists had a little card that she would wave.  It read" "Thank you for giving me a reason to smile today."

Here and there along the way were other signs on kindness. 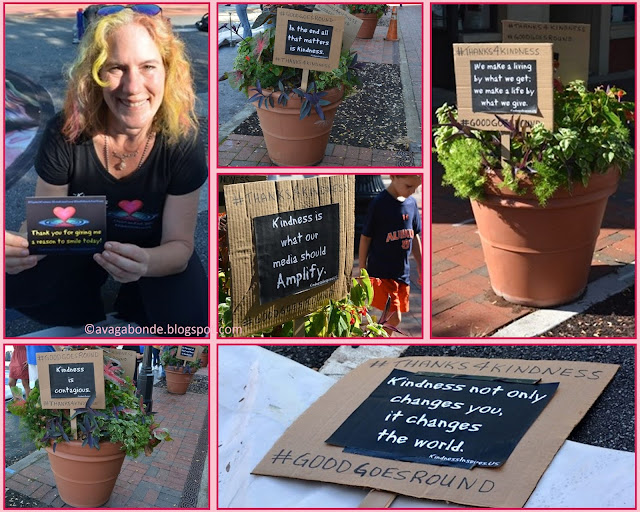 Kindness matters, indeed.  If humanity would go beyond hatred and fear, maybe world peace could be achieved.

"Do your little bit of good where you are; it's those little bits of good put together that overwhelm the world."        -Desmond Tutu, South African theologian and human-right activist, born in 1931.

I'll stop on these good words, and will show the 2019 Chalktoberfest in part 2.

Wow, wow, and wow.
I always enjoy your chalktoberfest posts and this one is no exception. Thank you.
And a big hooray for kindness, showing it and receiving it.

These are so wonderful. We used to have a chalk festival in Bellingham, but it was discontinued. I love the beautiful art you show here, VB. :-)

What a wonderful celebration and such displays by talented artists. This was definitely a great photo opp as well. Thanks for the visual tour.

What a fun event. Our Greg does a lot in chalk and when I saw those tarps and that rain my heart fell a bit -- always a danger for chalk artists! I love the holiday decorations and the wonderful costumes. It's a jolly holiday, isn't it?

I'm in awe of the people who create chalk art. Thanks for sharing so many examples. Looks like a fun time.

There are so many artists who participate in this event! And such a variety!

Hi Vagabonde, Nifty chalk art! My stepbrother used to participate in a similar event in southern Florida...and he was pretty good at it too. Love that old tan over bronze antique auto and the taxi/patrol care is a clever idea. We also stop for dogs...despite the fact that we don't have one. We get our dog and cat fixes from neighbors and friends. Take Care, Big Daddy Dave

Dear Vagabonde, the detail in these chalk drawings--of fur and draped clothing and beard and hair is astounding. Thanks so much for sharing. i look forward to the 2019 posting. Your curiosity about life is wonderful and the you share it with us is a true gift. Thank you. Peace.

The chalk art is quite stunning. I can't imagine being down on my hands and knees and creating those marvellous images, and then have the rain come and possibly wash it all away!
I love the doggie wearing sunglasses. And the Police Car / Taxi combo!!!

What fabulous cars and chalk artwork. I would love going to one of those shows.

Street art is becoming more and more active and skilled as an artistic discipline, and you illustrate how temporary murals on the pavement have become such a wonderful art form. Wall paintings done with skill and taste are also gaining interest -- and above all, these forms are all gaining the support of municipal authorities, building owners, and others who make them so different from the vandalism of graffiti. Your collection of photos is really wonderful.

I've never been to an art festival like this, amazing pictures. All the more so to think of them not being permanent. Kind of makes me realize that all art does not have to last forever but just to enjoy it and appreciate even that that is fleeting.

I'll be watching for your NC mountains post! It's a place I consider my true home of the heart, having lived there as a child.

My son lives near there, I will have to tell him to not miss it next year! Rain and chalk would not be good, nice they had the forethought to have the plastic covers.

I am always impressed by the skill shown by chalk artists. I wonder where they learn how to do it. It always looks really professional!

This chalk art is lovely, I read your more recent post first and then came over to read this post too. Nice to see all the dogs who are apparently art lovers too. My dog Bounce would enjoy it.

So glad you attended this festival and shared these wonderful images with all of those who could not be there.