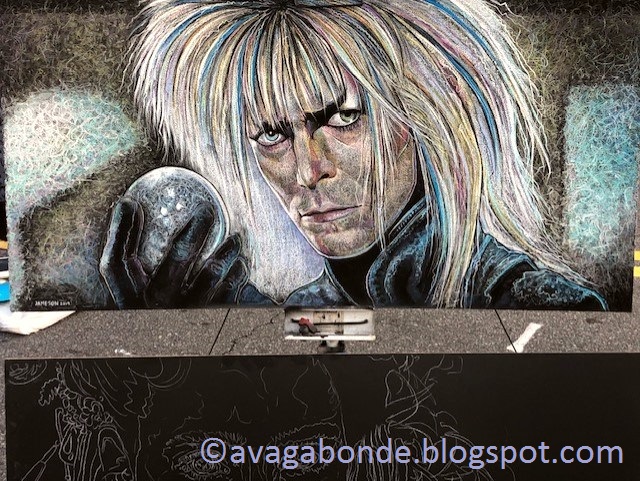 This is a continuation of my post of October 30, 2019, "Chalktoberfest 2017 and 2019, part 1" where I showed pictures from the 2017 chalk festival.  The following contains photos from the 2019 chalk festival.  I usually would attend on the Sunday when all the chalk drawings were finished, but rain was expected that day, so I decided to go on Saturday afternoon, October 12, 2019.  First of all it was difficult to find a parking place.  Where parking had been free in earlier years, now it was quite expensive.  When I went to the first chalk fest in Marietta in 2013 there were 20 artists from around the country then and a small crowd of onlookers.  In 2019, 86 international chalk artists took part and the crowd had increased to over 100,000 attendees! 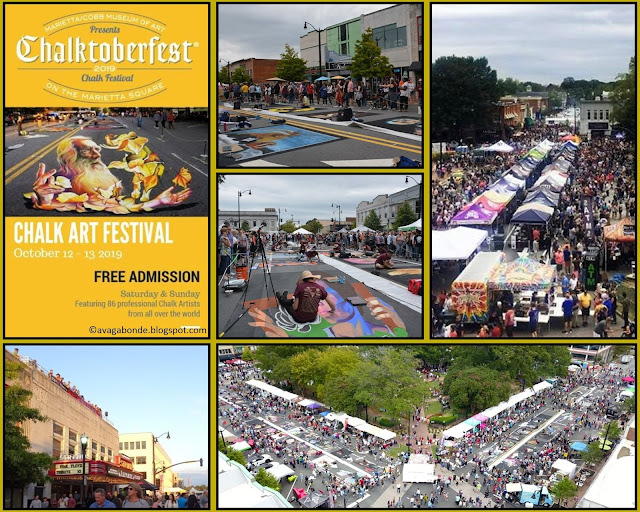 Each artist is sponsored by a business or organization.  The name of the business is inscribed in the street painting as an advertisement for that firm.  A side road has an area reserved for non professional artists, of all ages.  As I started walking around I saw many drawings that were in different stages of completion.  At the end of the day before I left I walked again by several drawings that had been finished.  (Please click on collage to enlarge.) 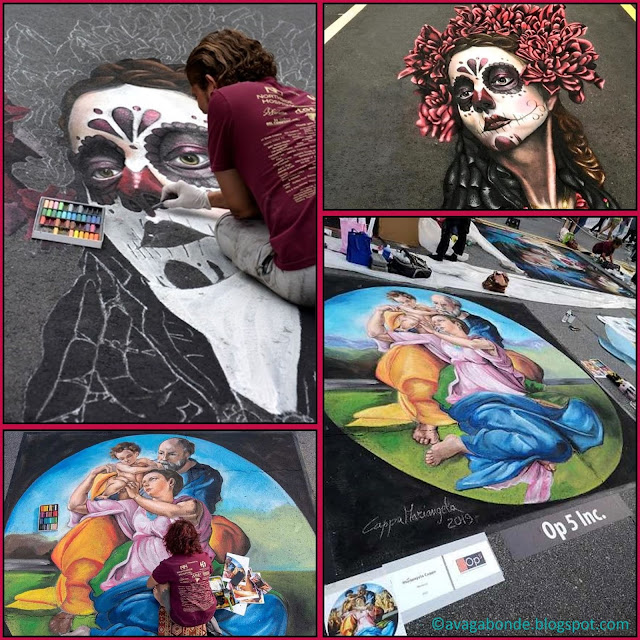 Two little boys next to me could have been in the drawing we were checking.  This trompe l'oeil drawing won 2nd prize I believe.  The first prize was awarded to the drawing called "The siblings" shown on the bottom right of the collage below. 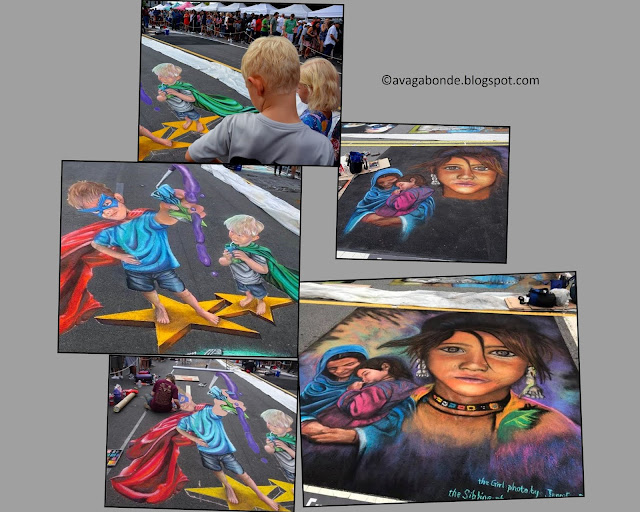 One of my favorites was the drawing of a dog, sponsored by the Cobb County Humane Society.  It won 3rd prize.  I also liked the drawing of the late David Bowie, English singer-song writer and actor (1947-2016.)  You can see his two colored eyes in the heading photo. 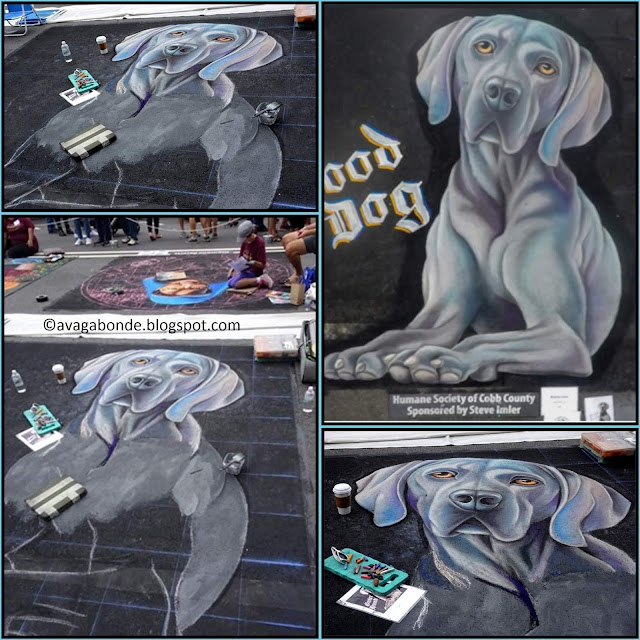 It was difficult to choose a favorite with all the beautiful art from so many artists, coming as far away as Serbia, the Ukraine, the Netherlands, Argentina, Mexico, Italy and 18 states in the United States.  I liked "Svegli nel sogno" / Awake in the dream" a drawing of Vittorio Valiante of Naples, Italy. 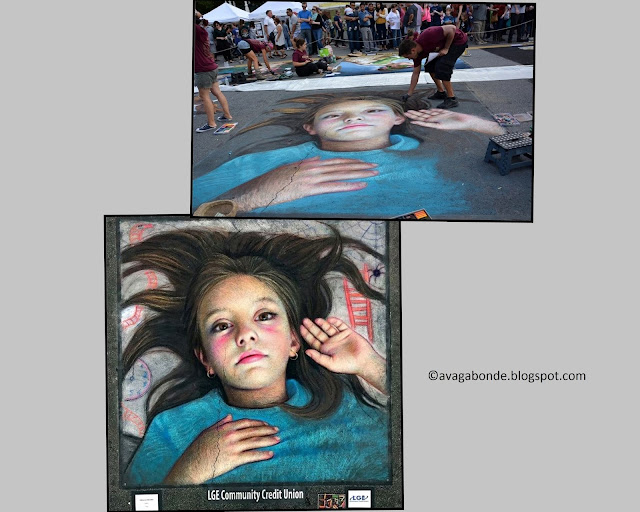 I stopped to watch Velko Geurgevich from Belgrade, Serbia.  He was not in a hurry to be finished.  We talked for a while after I told him I had been to Belgrade years ago.  Unfortunately, I never saw his finished work.  He says in his biography: "Nature is my muse.  I am forever devoted to portraying Nature in all its magnificence.  My landscapes are intimate and personal: I see them as pages from my diary.  My work is an attempt to show my respect towards nature, an attempt I am forever refining."  Below is his drawing in progress in Marietta and standing in front of one of his paintings. 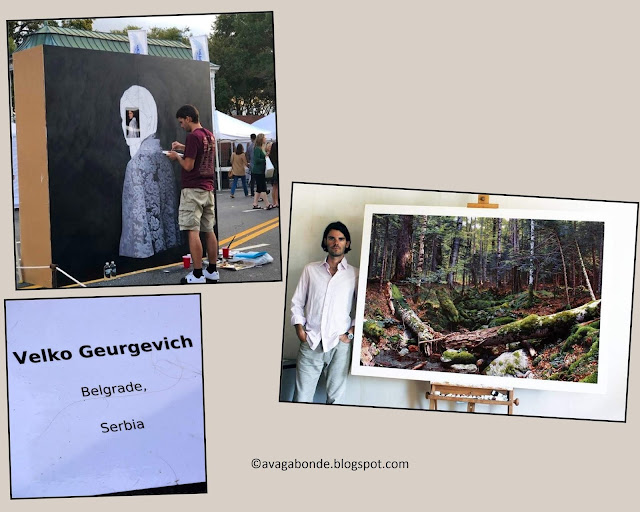 I took many photos with my two cameras and my cell phone.  Not only of the chalk art but also of the people walking by, standing on top of the Strand Theatre, dogs and chalk tool boxes. 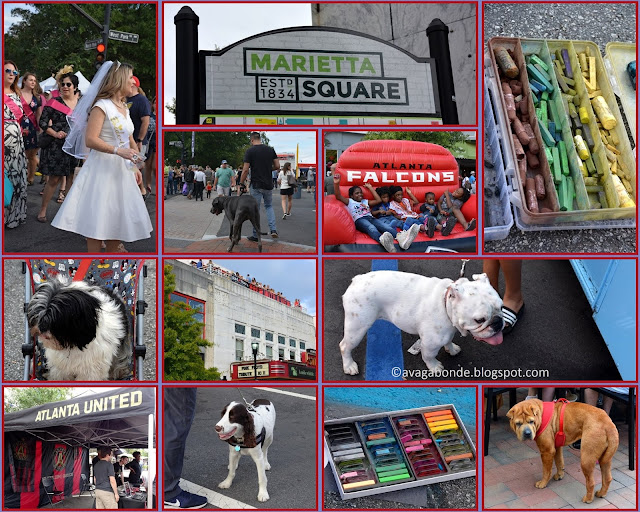 Below are two more drawings being worked on, and then finished. 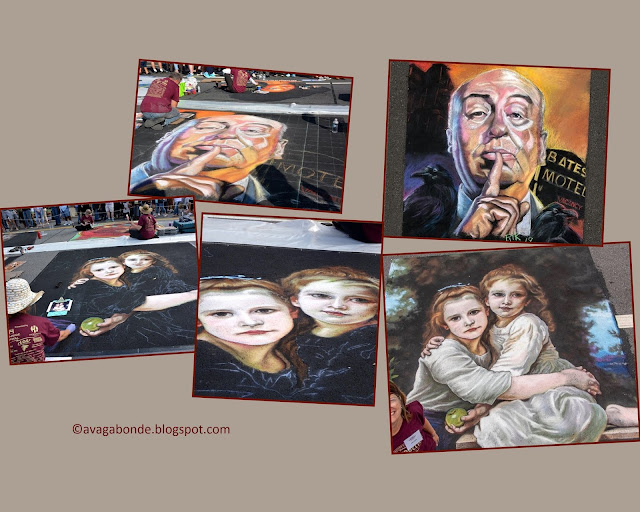 In Italy in the 16th century artists paid tribute to religious figures of the Madonna with chalk art in city streets.  They would travel around the country while earning some money from onlookers.  They placed plates beside their artwork and coins were tossed into them.  These early artists were called "Madonnari."  There are different categories of artists - copyists (recreating famous works or photographs and of celebrities,) free artists (creating their own work) and 3-D artists, creating anamorphic or "trompe l'oeil" art, that is to say - intended to give a convincing illusion of reality. 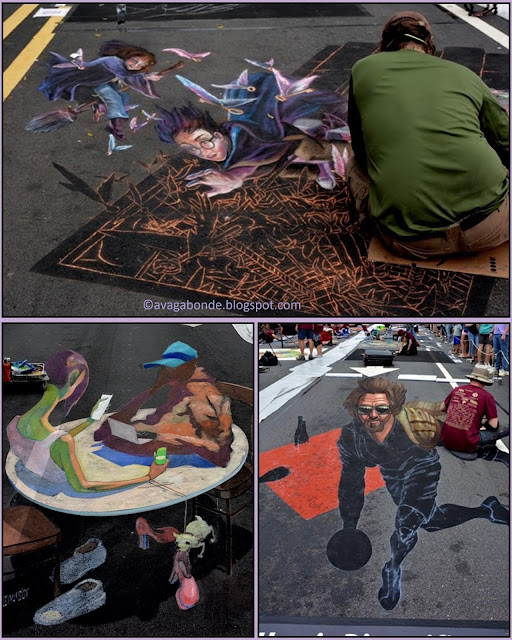 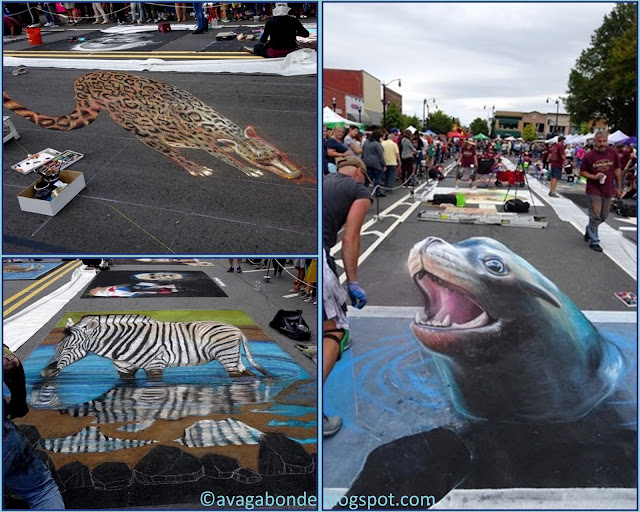 One of the reasons so many people are attracted by this art is the fact that it can be observed from beginning to end.  We see how the artists plan and create these large-scale drawings.  How the plain dull asphalt is almost magically coming to life into vibrant colors. 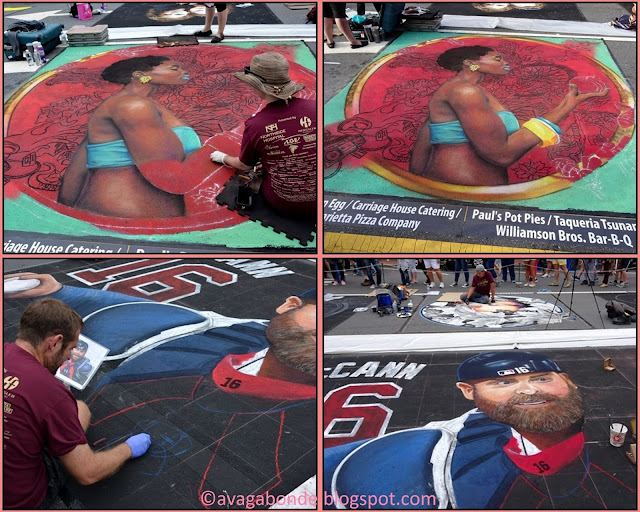 It is truly amazing to see these oversized masterpieces in chalk next to our feet. 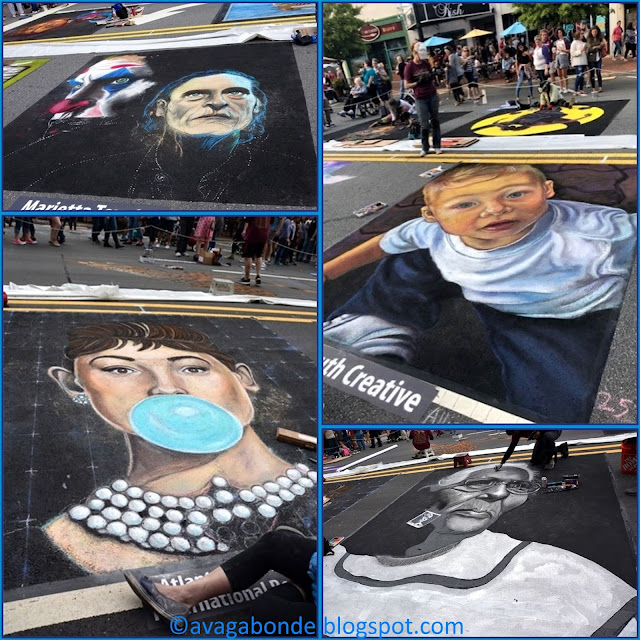 There was a steady stream of spectators, some taking selfies, others using cameras.  Most just gazing at the art and walking on. 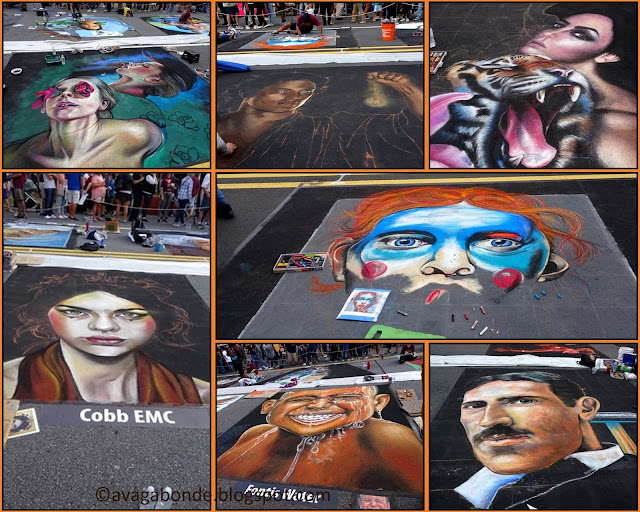 Just with little sticks of multi-colored chalk a talented artist can create enchanting and intricate paintings. 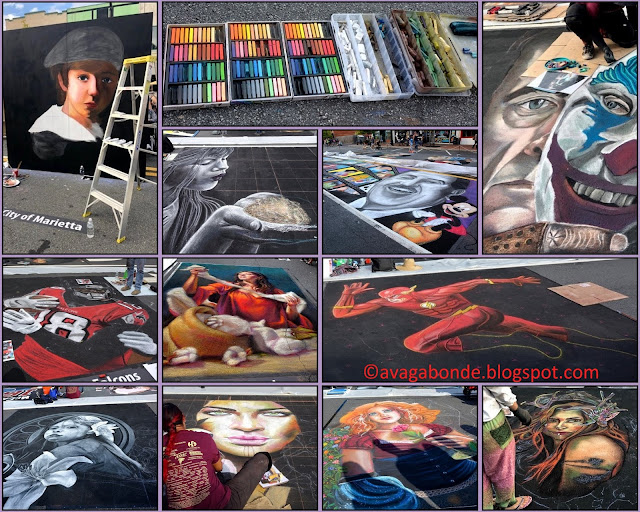 The festival included vendors, food, drinks and crafts.  Live music was being played non-stop by local bands in the gazebo.  The last band to play was a band I had heard before and liked.  It is called "The Paradocs."  It is a team from the medical staff of the Atlanta Northside Hospital.  The guitar player below on the right in the center picture is a pediatrician, the singer an oncologist doctor, the drummer is a pharmacist, another guitarist is an obstetrician, the ICU staff on bass.  A nurse was dancing next to me (pictured in the white skirt below.)  The rhythms were infectious - the repertoire was from classic rock - it was hard not to sway to the music! (and I was ...) 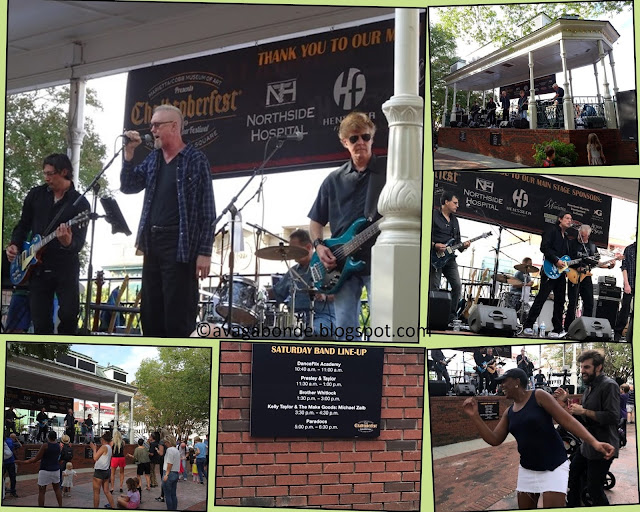 It had been another magical festival.  This year again many talented artists worked on hand and knees to design these ephemeral creations and bring our streets to life.  An artist was asked if she was sad that all her work would be washed away soon.  She answered that it is the same when you go to the theater to watch a play.  When it is over, you clap and leave; they are just as fleeting.  As French philosopher Frederic Lenoir said:

(Everything goes away; everything is ephemeral, the sublime happiness as well as the greatest misfortunes.) 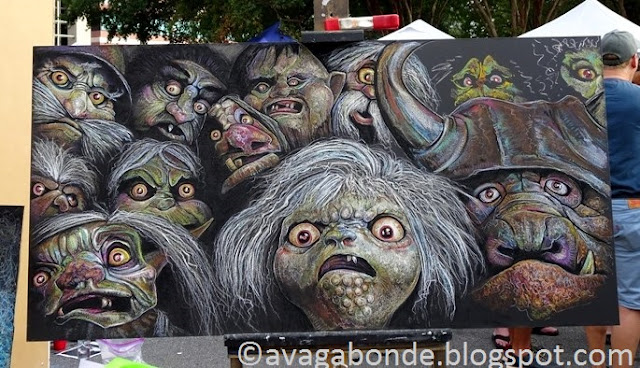 TRULY fabulous. Yes, it is an ephemeral art, but oh, what a beautiful one. I love the answer about going to a play and it is over. I'll have to remember that.

Wow! What an incredible festival. Every year it seems larger, and now I know that it truly is, every year it's more amazing. Thank you so much for sharing these wonderful chalk artists with me, and the people and dogs are fun, too. :-)

Hi Vagabonde, Way too many people for our taste but the art is amazing, that's for sure. Popularity of an event...or a city...a tourist attraction...can eventually overwhelm it and ruin it for many. Take Care, Big Daddy Dave

It's mind-boggling that people are able to create such magnificent pieces of art with colored chalks. The 3-D ones especially blow me away. Thanks for sharing your pictures of the event, because as much as I'd love to see it in person one of these years, it's unlikely. Then again... ya never know. :)

Woo hoo! This is a fabulous post of a great event! I would've loved being there! So many talented artists and spectacular works of art. Plus live music and food. What a fun event! Like the real dogs too! So many awesome things here, thanks so much for sharing!

Wow, what incredible and beautiful art. You captured the beauty of it all. Thanks for stopping by and leaving a comment and have a wonderful evening.

Wow! Excellent pieces of art. My favourite is Awake in the dream.

"86 international chalk artists took part and the crowd had increased to over 100,000 attendees!" I absolutely LOVE chalk paintings, Vagabonde, and see them from time to time here in Europe, as you'd guess. If I were still living near there, I'd definitely want to attend such an exhibit. Thanks for sharing these gems.

That must have been very interesting ! Something for me ! These are real artists some paintings are really good ! It's not easy at all to draw or paint in 3 D on the ground or even all walls !

Amazing art work! Yes, I remember you post the Chalktoberfest in previous years. Thanks for this blogging tradition keeping us informed of and bewildered by this wonderful festivity!

Dear Vagabonde, this was a fantastic festival. I have never seen so many chalk drawings. You are right - it is unusual to see these large paintings near your own feet. I liked the pictures of children, beautiful faces.
Thanks for sharing!
I hope you are doing well now and have no problems with the trees around your home.

Those chalk drawings are just amazing! I had no idea artists could make such beautiful peices in that medium. You are right - they fit right into your Buddhist concept of impermanence!

The artists coming from near and far are very talented. It must be interesting to see them working on a piece from start to finish and, if possible, talk to the artists. Thank you for the information about the different categories of artist and about the Madonnari in Italy. I think that if these modern day artists go to different festivals they are keeping up the tradition of being travelling entertainers. The musicians too add to the festive atmosphere. It looks like a well organised event although you now have to pay an entrance fee and is crowded.

These chalk artworks are fabulous, especially the ones you showcased. The first one shows David Bowie in one of my favorite movies. The one of the sea lion looks very alive and 3-D. Such talent, as one artist said, theater is the same, it does not last forever. I read your comment on my blog today and see we are both book lovers working at paring down our collections.

Enjoyed your photos very much. Great artwork displayed. Looks like a wonderful festival.

Such amazing talent! I was thinking about the purity of ephemeral art -- the comparison to a dramatic performance is excellent.

WOW such amazing artwork and the fact that it is temporary is very sad. I would be hard pressed to find a favorite among all the images you showed in this post, but the Harry Potter one would be one.