Dogwoods in and around Atlanta 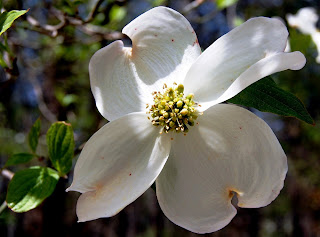 There are many native dogwood trees (Cornus florida is the Latin name for this native tree) flowering in and around Atlanta. Actually the lovely dogwood blossoms herald spring in Georgia . It is such a pleasure to drive along the roads where so many varieties of dogwoods can be seen, bearing clouds of white or various shades of pink blossoms. Here is a southern mansion with a dogwood tree, on the left behind the azalea bushes, starting to bloom

A dogwood tree, in full bloom, is a lovely sight. This year the dogwood trees look especially nice, with gorgeous colors.. 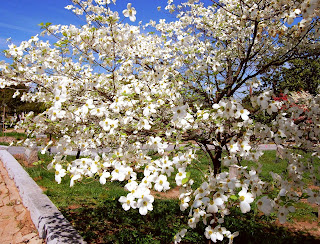 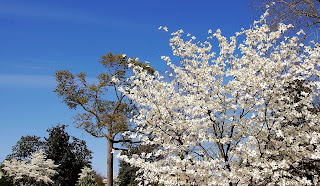 These dogwood trees seem to be covered with snowflakes - 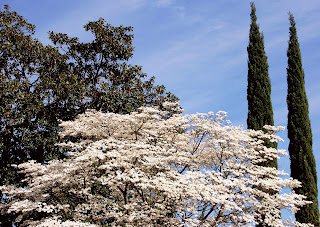 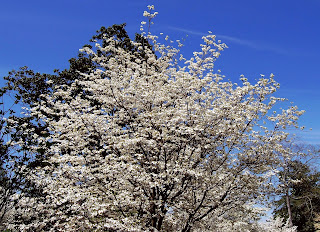 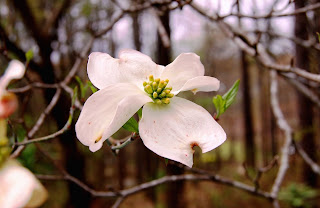 The dogwood trees are loved both by humans for their elegance and beauty and by wild birds for their seeds in the fall. Unfortunately, a couple of weeks ago, two of our wild dogwood trees went down during the last storm which had up to 60 miles an hour wind. 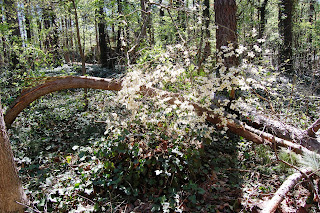 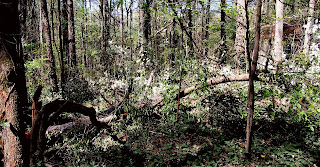 Swarm of bees in the azalea bush 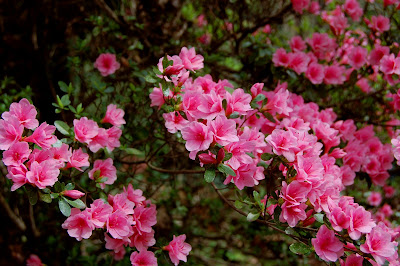 Many years ago I was given a small pot with a pink azalea in it. We planted it in the back yard and never fertilized it nor pruned it. Now it is about 12 feet high and each spring is covered with radiant blossoms like a resplendent giant pink cloud.

A few days ago, my husband, Jim, was reading on the porch and heard an unusual sound which came from the azalea bush. He called me to come outside and we observed what we guessed to be hundreds of honey bees swirling around the bush and then settling inside the foliage of the bush itself. 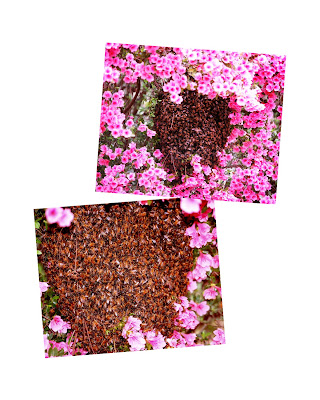 After finding the Beekeeper Association in the phone book, I contacted Bee’s Honeybee Removal and Cindy Bee herself (that is her real name) came with all her accoutrement to gently remove our honeybees and give them a good home where they will provide some good honey with all her other 1000's of honeybees. 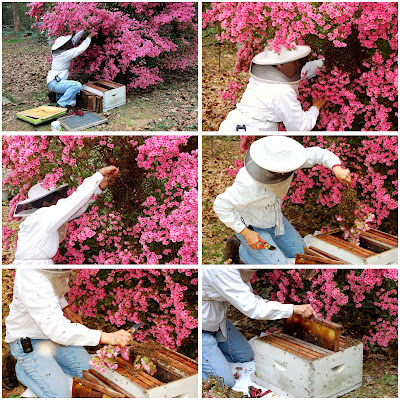 She gave us a quick course in honeybee (apis mellifera) habits. Honeybees are very social and create elaborate hives where they work together in 3 groups called castes: queens, drones and workers. Each hive has one queen honeybee laying about 1500 eggs a day for up to 8 years. The worker honeybees called “field bees” gather pollen, nectar, water and a sticky plant resin used in the building of the hive. When the hive is overflowing with nectar, pollen and baby bees, the worker bees “panic”. They feed royal jelly to the fresh eggs in order to create a new queen honeybee and starve the old queen honeybee, which subsequently leaves the hive, accompanied by a large number of her loyal followers. She lands nearby and all the honeybees flying with her come and form a living “bee” ball around her – which is what we saw in our azalea bush. Cindy Bee efficiently led the honeybees into the frames of her nuc box and very few remained. When asked, Cindy said that this swarm had about 30,000 honeybees or more. Our guess of “hundreds” was pretty far off the mark. 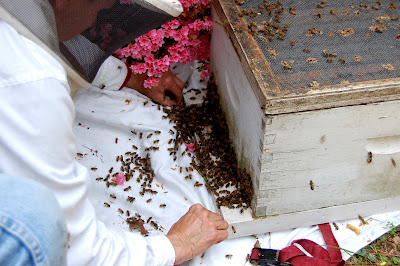 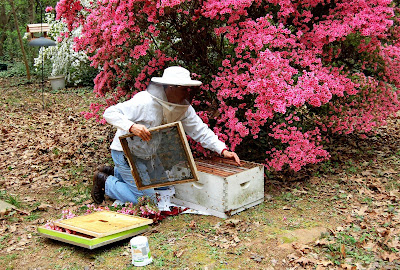 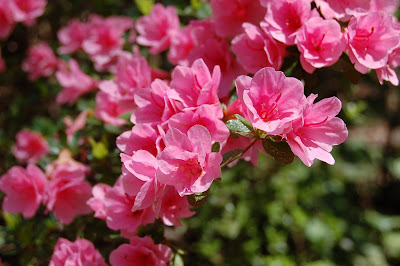 We have another azalea bush, white, which flowered a few days later, but no great numbers of honeybees came this time. We’d like to plant a couple more azalea bushes but there are so many varieties – thousands of them – that it will be hard to make a choice. 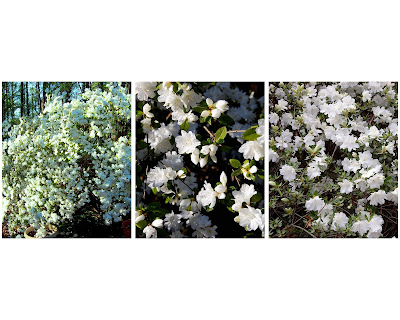