Books, food and airplanes in Alameda 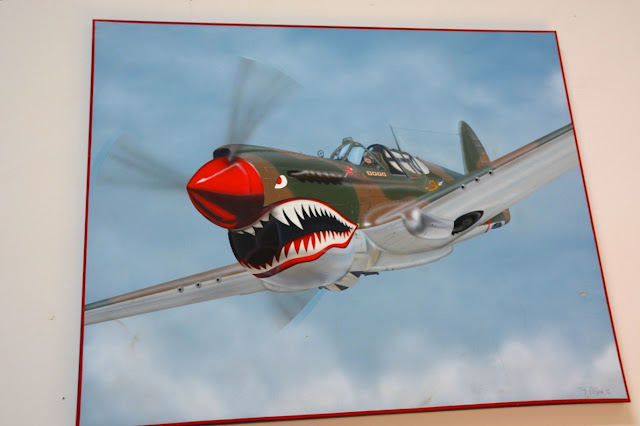 In early July I flew on Southwest Airlines from Nashville, Tennessee to Oakland, California.  I sat next to a window and could admire the scenery below.  (Click on collage to enlarge.) 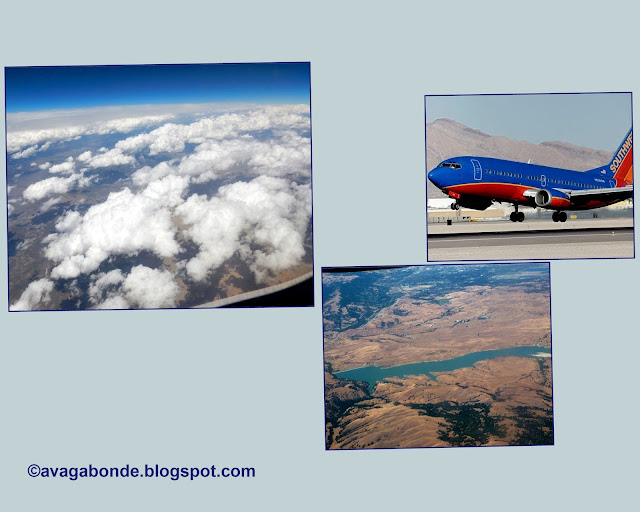 We stopped in Las Vegas, Nevada, for about one hour.  My husband and I visited Las Vegas in late 1960s I believe, but not since.  There were gambling places then but nothing like the current extravagant casinos.  Below are some vintage postcards. 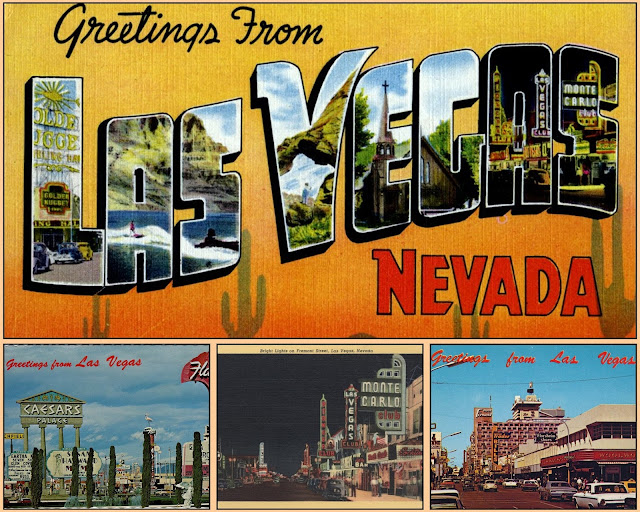 I was surprised to see so many slot machines in the airport, but I think they are everywhere in Las Vegas. 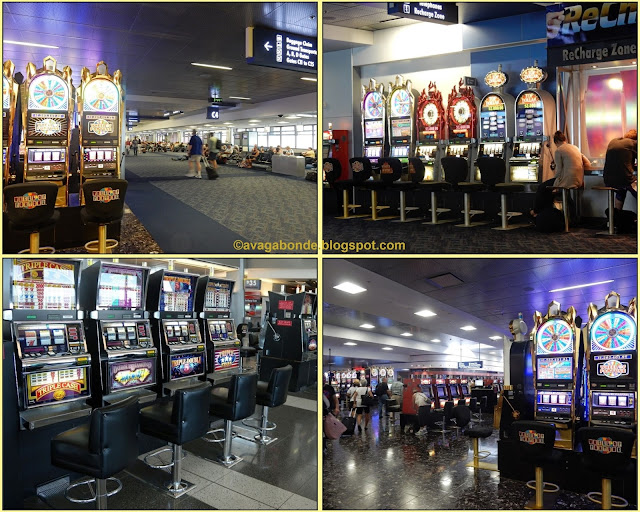 Since I could not go into town and visit the casinos I bought two postcards.  I was amused by Las Vegas calling itself "The City of Light" and their own Eiffel Tower - a half size replica from the original monument in Paris. 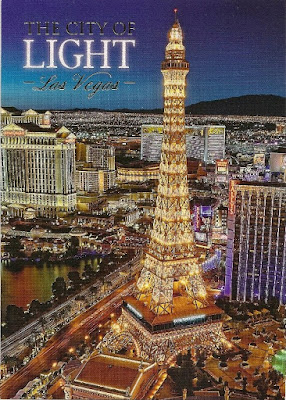 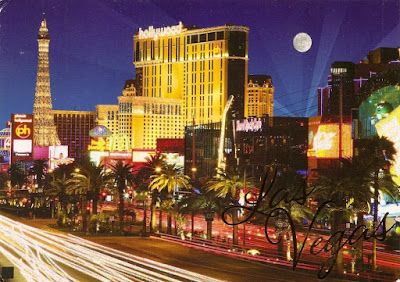 Next, we landed at the Oakland International Airport which is about 10 miles from Alameda Island where I was to stay for two weeks with two of my grandchildren.  (You can read about my stay there in my last post.)  As a pure coincidence my eldest daughter, Celine, was having business meetings in the area.  She was able to visit her nephews and me on the week-end.  On Friday night we went to eat at a downtown restaurant on Park Street called "Papa Mama Lithuanian Restaurant."  Since we had never sampled Lithuanian cuisine we were happy to try a variety of dishes.  Celine started with Fried Lithuanian Rye Bread and then ate a pretty colored Borscht (Šaltibarsčiai .)  Her fiance Michael had the Stuffed Chicken Roll (Vištienos Suktinukas) and the boys had the Flour Dumplings (Koldunai) made with traditional handmade dough stuffed with 4 different fillings: beef and pork meat, chicken, potato and cheese, and potato and mushroom.  I had the Stuffed Cabbage Rolls (Balandeliai.)  We also drank the special Lithuanian Amber Tea (Gintaro Arbata) with small amber pieces in it - different and nice. 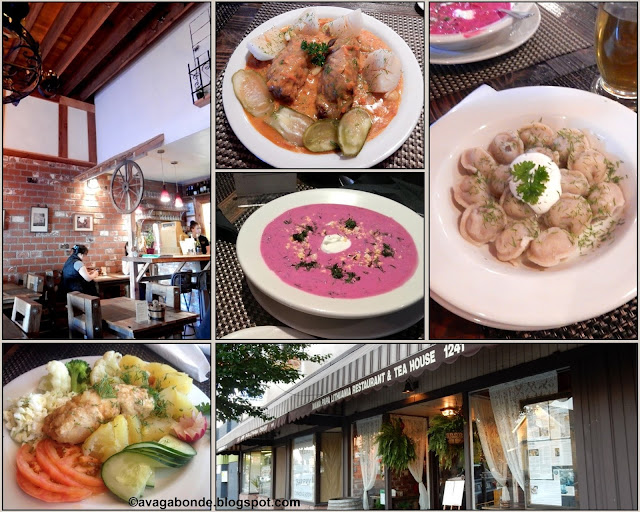 As I mentioned in my last post it was difficult to follow the Tour de France on television as the program came too early in the morning.  Luckily, on Park Street, I found a shop that had the last copy of a Tour de France magazine. 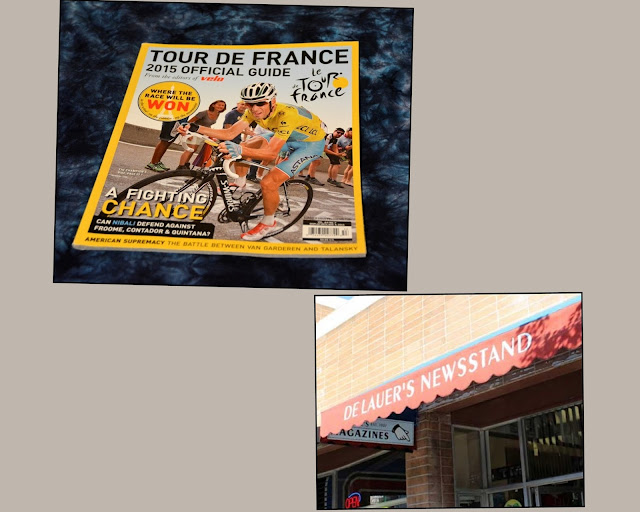 On the same street - which is the main business street in Alameda, I found a large independent bookstore called Books, Inc.  While driving around I found another bookstore, Wilmot's Books, selling second-hand books (my favorite.)  I did purchase several books there, mostly mysteries, but some non-fiction, and a French book (some of the books shown below.)  I talked with the owner of the shop for a while.  He gave me some interesting historic information on the island. 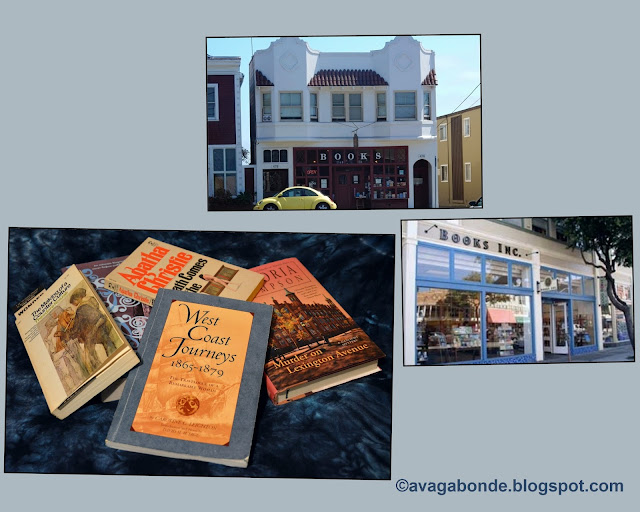 On the following day, Saturday, we drove over the Bay Bridge to San Francisco and I'll have a future post on our afternoon there.  We came back to Alameda for dinner.  The choice of restaurants is very large in Alameda for such a small island.  I had a restaurant guide and as you can see in the collage below, on the purple page, the longest list of restaurants is for Asian eateries.  Many Chinese and other Asian people have lived on Alameda Island for over a century.  Caroline Leighton (book pictured above) who traveled to the West in the 1860s and 70s lived on Alameda Island for a while and mentioned in her memoirs that her neighbors were Chinese.  Actually the population of Alameda now is about 35% Asian (but when I went grocery shopping it seemed more like 75%.) 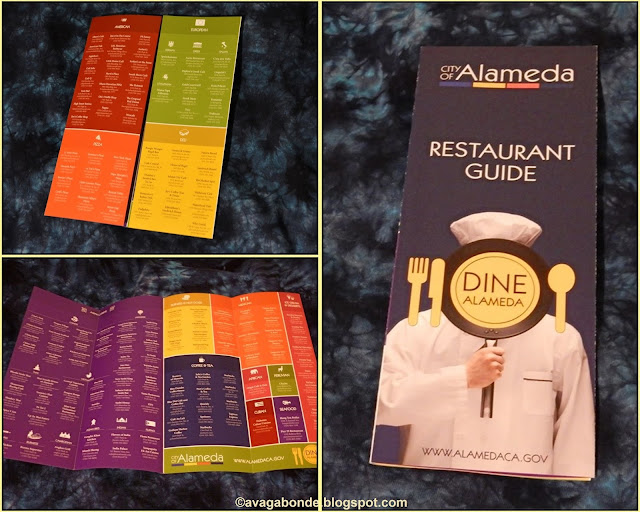 We went to dinner at China House, a restaurant off Park Street, located on the second floor.  It looked to me like Chinese restaurants I used to patronize when living in San Francisco in the 1960s.  China House was established in 1968 and the decor is vintage, classic 1960 American-Chinese style.  The same family has owned the restaurant all these years and we were told the decor, pieces and ceiling covering were hand painted in Taipei, Taiwan.  We ordered several dishes, family style, and when we were finished my grandson (8 years old) who is learning Chinese, told our server, in Chinese, how delicious the meal had been.  She was quite surprised and told us his Chinese was very clear and good. 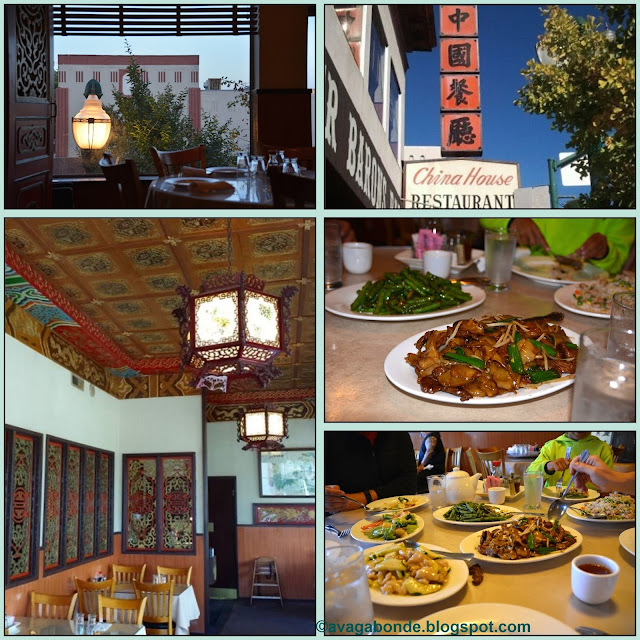 For dessert, we just walked a block down Park Street to Tucker's Super Creamed Ice Cream.  There was a long line of local people waiting from the street all the way to the counter.  Tucker's has been in business on Alameda Island since 1941.  They offer shakes, floats, sundaes and 34 different flavors of ice cream.  The building is long and old, with an open front to the street and a back patio.  I sat in the back while my daughter bought the ice cream.  In front of me was a large wall painting that made me feel like I was in Italy rather than California. 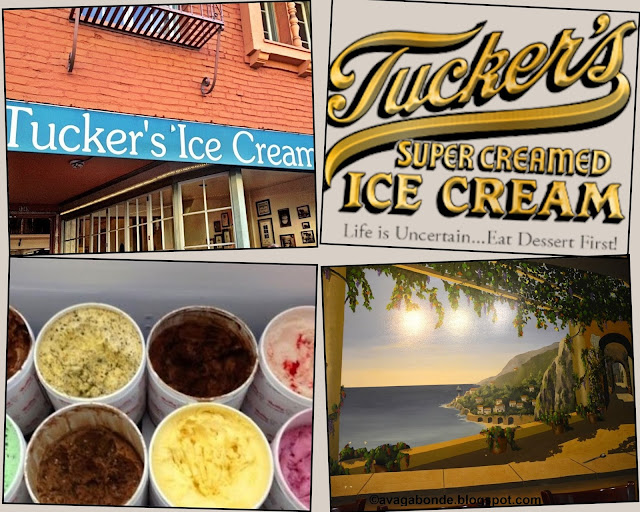 On Sunday morning while daughter was getting ready for the airport we gazed at the lagoon.  Her studio was an "upgraded" accommodation with lagoon view. We had some bread leftover and the birds were not shy to come close to us to fight for it. 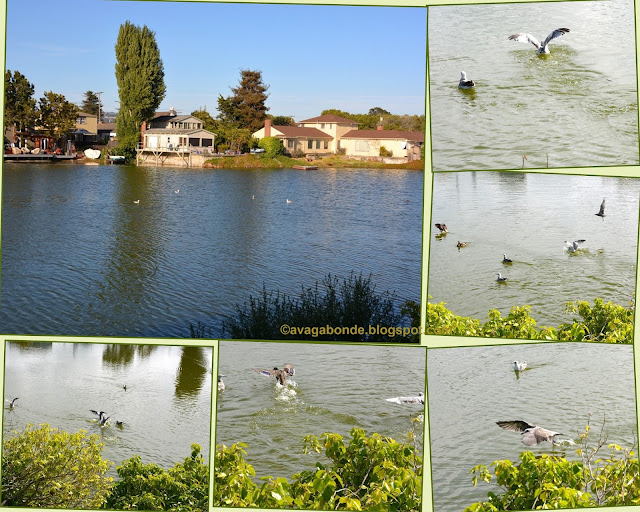 The great egret did not even look in our direction, though. 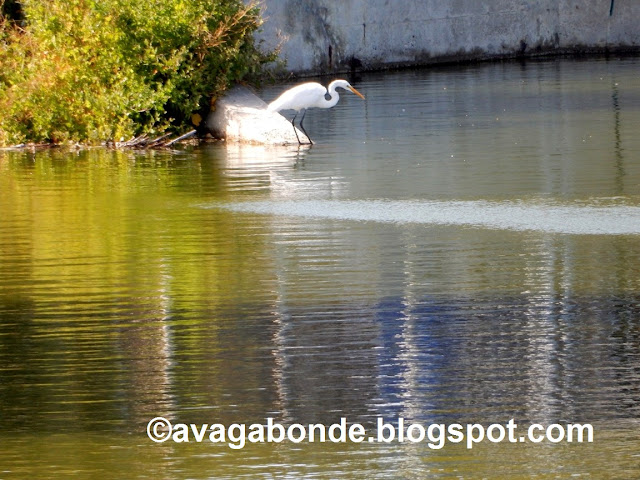 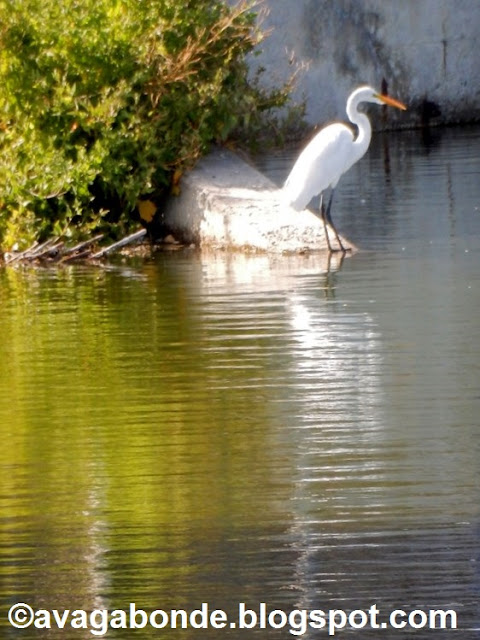 Daughter called from the airport to report that she had driven by a small aviation museum and suggested that the boys might enjoy visiting it.  So we drove there to investigate.  There were just two mothers and children outside the museum and they soon left.  The airplanes in front of the museum are the only ones the kids can climb into. 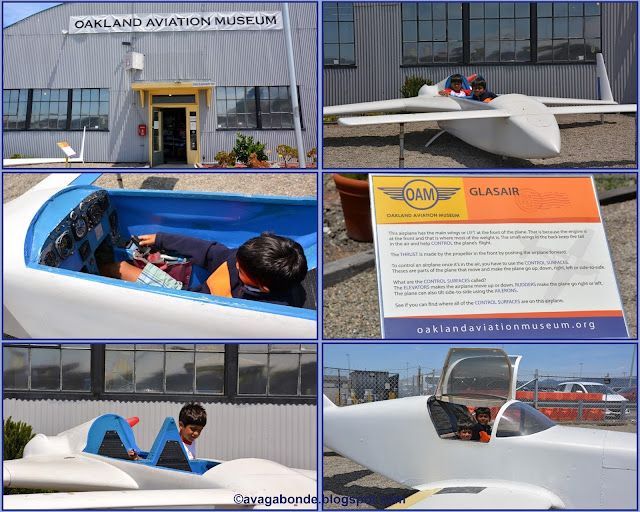 The museum is small but there is a good assortment of vintage airplanes with clear information on their type.  There are airplanes in the hangar and also outdoors.  The white airplane below with a red nose, and the inscription "Magnificent Obsession II" and No. N751JR on its tail is a 3/4 scale replica of the fames "Red Tail" Mustang - Jurca MJ.77.  These airplanes were flown as bomber escort over Europe in WWII by the illustrious "Tuskegee Airmen" the African-American military pilots. 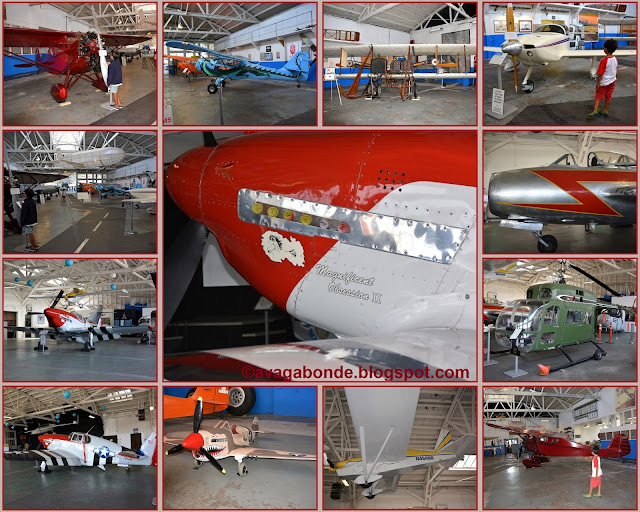 Grandson is reading the info panel in front of the MiG-15 fighter.  This Russian airplane was designed in the late 1940s by Mikoyan and Guryevich (MiG) with advanced German aviation technology.  It was one of the most famous aircraft of that period with strong and dependable performance (first flight in December 1947.)  As a sideline, my father's first cousin, who was an Armenian like my dad, was a friend of Artem Mikoyan (the aircraft designer) and his family and visited them several times in Russia.  The Mikoyans are Russian Armenians.  (Click on collage to enlarge to read.) 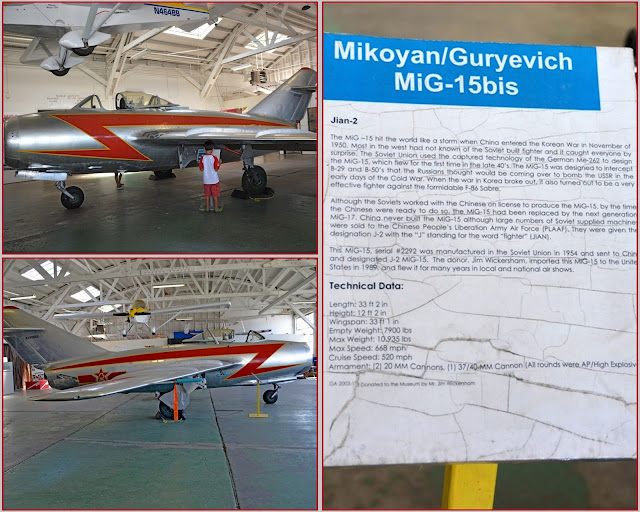 A couple of interior rooms are dedicated to Aviation history and African-Americans in aviation, men and women such as the Tuskegee Airmen and Elizabeth "Bessie" Coleman (1892-1926,) first African-American female pilot.  There is also a room dedicated to women in aviation.  Below on the right-hand side is Amelia Earhart and on the left hand-side is a picture of Baroness Raymonde de Laroche, born in Paris in 1882.  She was the first woman, in the world, to obtain a pilot's license - on March 10, 1910.  She died in 1919, aged 37, during a training flight, piloted by someone else (she is buried in the Pere Lachaise cemetery in Paris.) 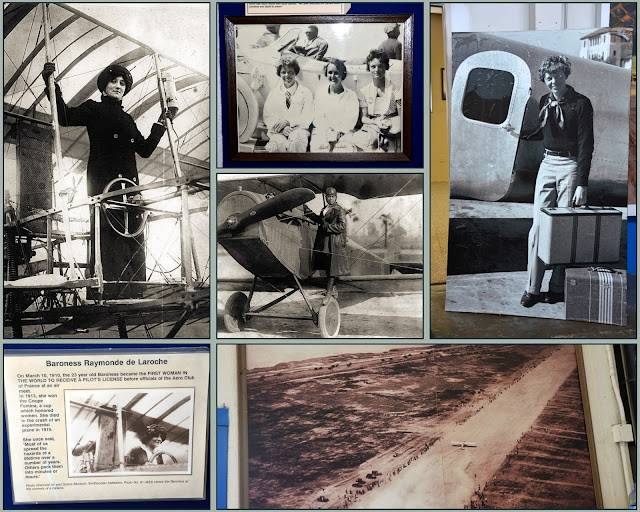 Another room contains many uniforms, such as a Luftwaffe German pilot leather flight jacket.  A video runs in another room and there are more rooms with exhibits.  Frankly, to read and look at everything would take more than a day as there is so much aviation history there. 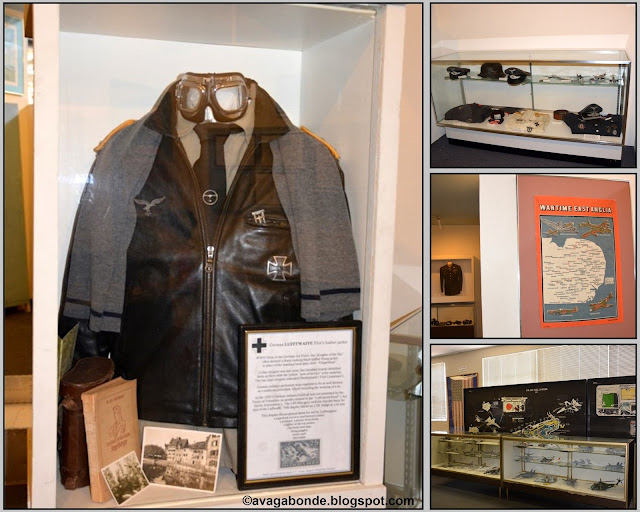 Outdoor the boys enjoyed looking at many vintage and retired military aircraft - aircraft from the Vietnam War era to the 1990s.  There is even an ex-BOAC Short Solent Mark III flying boat.  It was once owned by Howard Hughes and was substituted for a Boeing China Clipper in the Indiana Jones' movie Raiders of the Lost Ark.  The  Oakland Aviation Museum is a small museum, a bit rustic, but the right size for two small boys to enjoy on a sunny day.  As for me, even though I worked for 26 years with airplanes I still like to look at them. 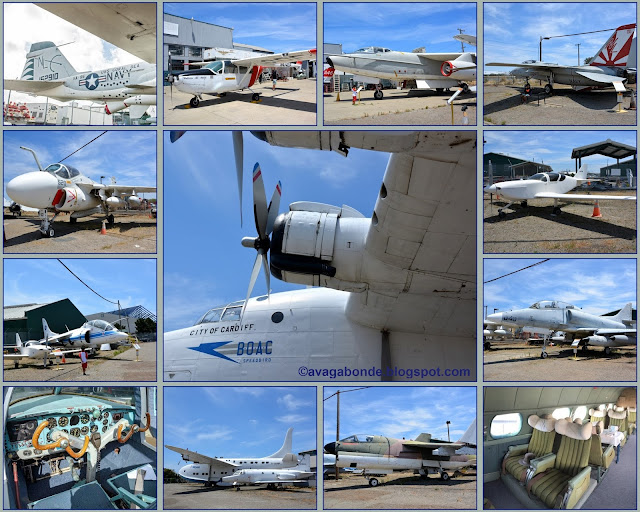 Leaving through the small gift shop I bought a couple of little toy planes for the boys ... and some old postcards for me.  The bottom postcard on the left is on Japan's attack on Pearl Harbor on December 7, 1941, and the bottom postcard on the right is the US Army Air Force pounding German supply lines over Italy with planes like the B-26 Marauder. 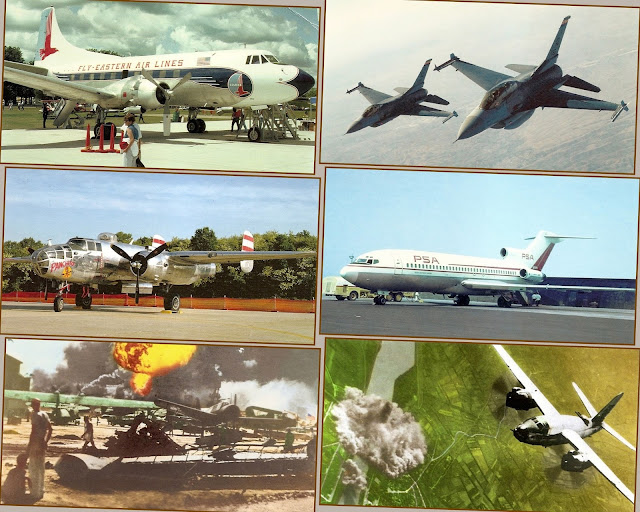 Then it was time for the boys to climb back into the two airplanes outside and play-act as ace pilots while I sat on a comfortable bench and watched them. 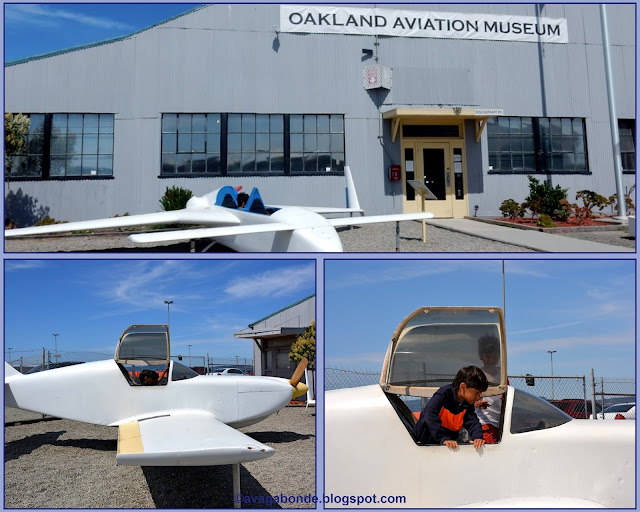 My mind wandered - so many different airplanes ... large, small, beautiful, frightening ...?  Could your mind turn an interesting airplane like this one 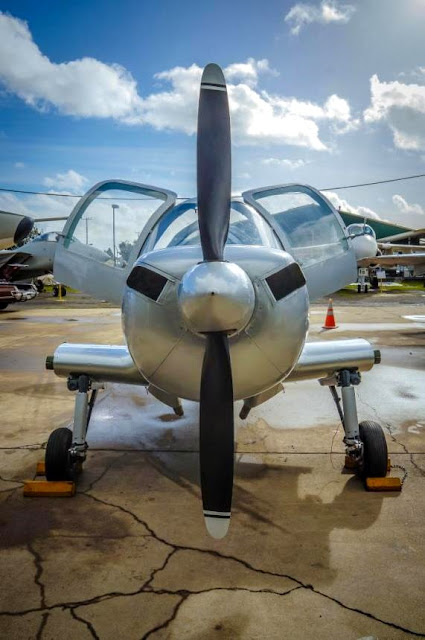 into any of these? 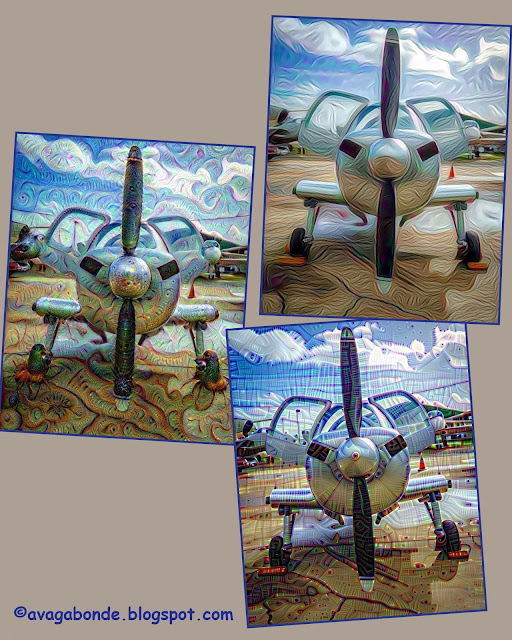