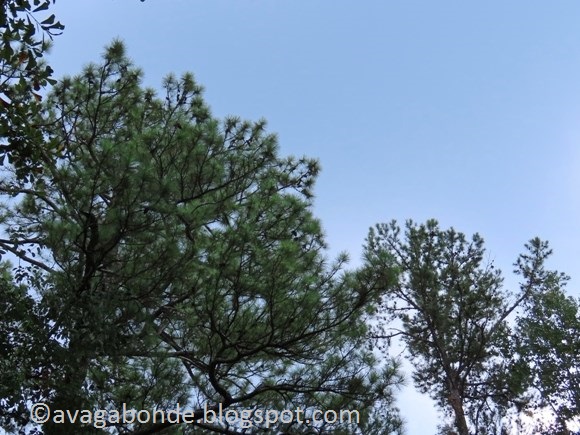 You would think that Atlanta, Georgia, being south from Nashville, Tennessee, would have warmer weather.  I just drove back to Georgia and noticed that it is cooler than in Nashville.  I believe the reason is that the elevation is twice as high here in Cobb County, GA, the sun is 2.5 degrees higher at midday and the relative humidity levels are 1.5% lower.  When I came here in August there was a heat wave in Nashville - 100 F (37.7C) and it was only in the high 80 F (30 C+) in Atlanta.  As soon as I exited my car at the GA house last Sunday the air seemed a lot sweeter and fragrant with the scent of pines.  Of course the house and all the adjacent land are covered with pine trees; in all direction I see trees, as shown in the heading photo and the photos below. 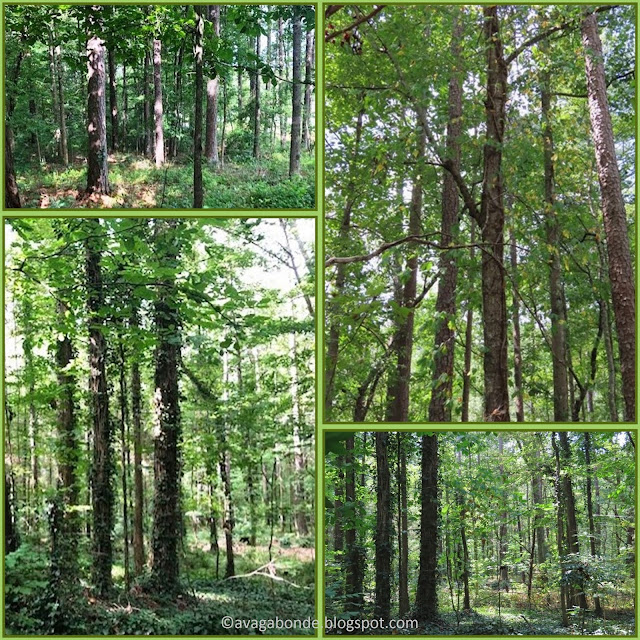 When we bought the bungalow in Nashville I noticed hat there were only two large trees around the house: one in the front yard shading the front porch and front of the house, and one on the back side of the house, shading the back porch and kitchen.  These were "hackberry" trees.  There were large trees in neighbors' houses as well.  Below are some photos I took with my old cell phone, one showing the large front tree and one taken from the backyard showing the side tree in front of the gate. 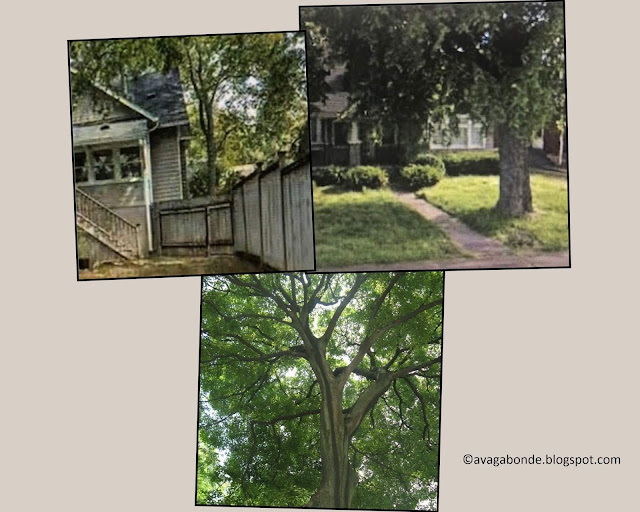 The hackberry trees (Celtis occidentalis) are native to Tennessee.  They are hardwood long-lived trees that mature at about 100 years of age and can survive to 200 years.  They can reach 75 feet.  They are good shade trees with very large limbs that sometimes are as thick as the trunks.  The trunks have a unique bumpy bark.  They attract birds (waxwings, mockingbirds, robins) and other animals that feed off the fruits.  The leaves of the hackberry are also host for several butterflies, like the hackberry emperor, the question mark and American snout.  When I looked out of my bedroom window I could only see branches and leaves instead of the traffic, as shown in the central photo below.  (Click on collage to enlarge.) 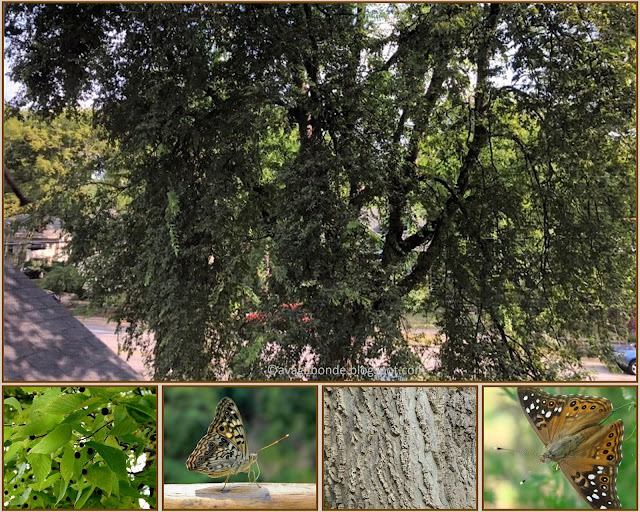 I started a post and called it "Good-bye to another tree."  As you may remember in June 2018 my husband's black walnut tree fell on our roof in Georgia during a heavy storm and I wrote a post about it "A Fallen Tree."  I ran out of time and did not write this new post.  Now back again to this post, unfortunately I have to change the title to "Good-by to more trees" as you shall see.  On Thursday June 20th, 2019, I drove to Georgia.  On Saturday June 22, I received an early phone call from the people renting the next door house telling me that there had been a terrible storm on Friday night in Nashville and my front yard hackberry tree had been hit by lightning.  A huge limb was on the ground across their driveway - they could not get out.  All the electric wires were down as well as the cable.  I spent all that weekend on the telephone, trying to take care of all this from Georgia, with the handyman for cutting the limb, the electric company to come and repair the live wires and more.  Pictures were sent to me. When I returned to Nashville I asked an arborist to come and see if the hackberry could be saved.  No, he said, the tree could fall during the next big storm, on a car, my house or someone; it had to be cut down.  He added that first the Nashville Electric Service (NES) would have to trim the high branches adjacent to the high voltage wires.  There had been so much tree damage in Nashville that NES did not send to have my tree trimmed until the end of the month, at the end of July.  I did not even see the NES contractor trim the tree, just heard their truck as they were leaving. 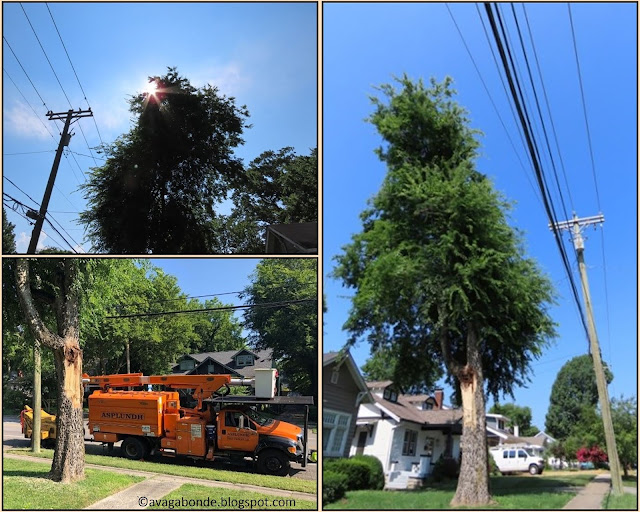 I had received three estimates from tree cutting firms to cut the tree down and chose the one that could come the soonest in case of another storm.  They came four days later with their big equipment.  It was with a heavy heart that I watched them cut my tree and took pictures. 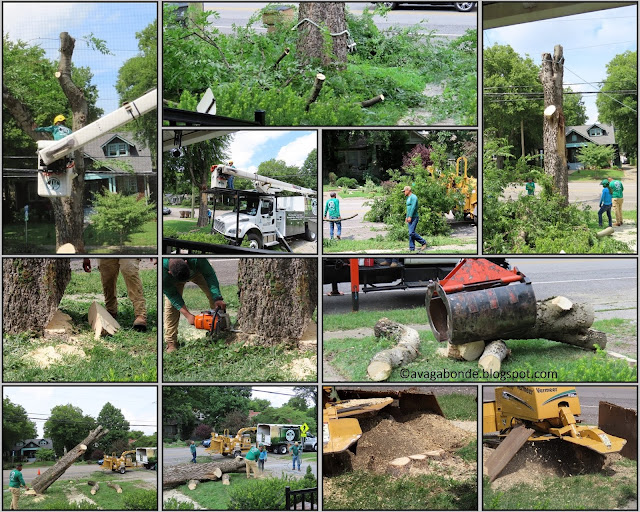 Now what was left was a slice of the tree that I had requested, sawdust where the tree had stood and burnt limbs on my little aspen tree and shrub suffered when the motor of their large truck stood too close to the shrubbery. 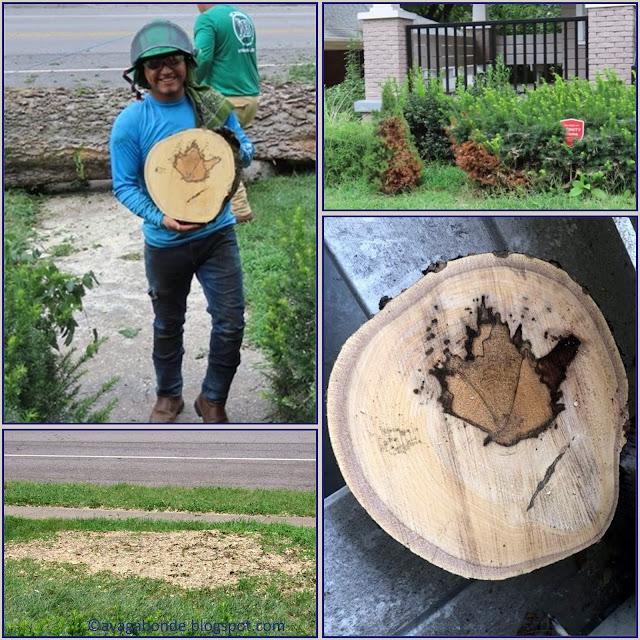 I drove back to Georgia in August but upon my return to Nashville later I noticed that my other large hackberry was no longer a tree, but just a huge tree trunk, like a giant toothpick.  I could not understand why someone would come while I was away and destroy my living tree like this without telling me.  There had been no storm and the tree was away from electric wires.  I did not think it could be the tree cutting company as they would have required payment.  I tried to find out from NES but they would not talk to me.  Finally last Friday their arborist called me and said that their contractors had made a mistake.  Either the first team forgot to record their cutting down my large tree hit by lightning or they came to the wrong address, but this tree was trimmed down in error.  He added that in a way it was a service to me as this tree would not fall on my house.  This tree was big, at least 35 ft. tall, was healthy and was shading my house.  It had value and was my only large tree.  I had some branches that were hitting the roof trimmed last winter.  See the trunk below - the electric wires are not near the tree, but by the sidewalk in front. 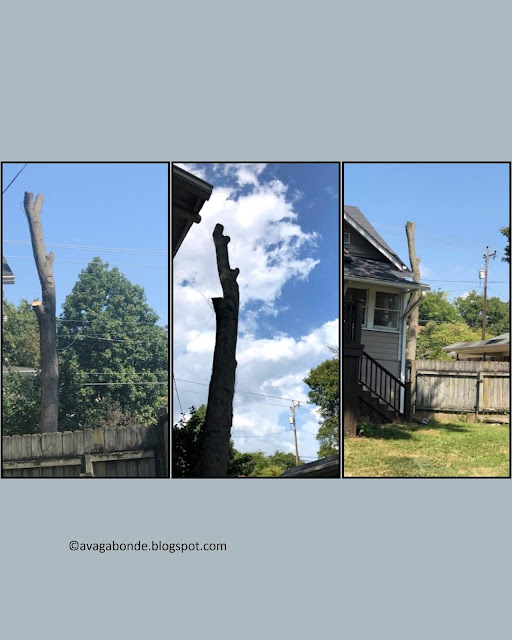 A volunteer at the TN UT Extension told me that this was unacceptable, that I need to obtain the contractors' names and have them cut the trunk and plant another tree.  Another tree will take years to grow, if they do plant one for me.  In Atlanta, the city imposes a $500 to $1000 fine for removing a tree without a permit, but Nashville has a maximum of $50, a penalty rarely imposed.  My hackberry hit by lightning cost me over $2,000 to cut down - I can't afford to pay this for a tree that did not deserve to die.  I was very upset and decided to mow my lawn.  As I was prepared to go down to my backyard I saw workers there, inside my fenced yard, who had placed their materiel and ladders there and were working on my other neighbor's garage.  The neighbors did not ask authorization for their workers to use my yard, and for 3 days at that.  That's when I realized that it is difficult to be from another culture.  The French are very big on politeness - we would never enter a neighbor's fenced yard and let workers stay there for days without asking permission  from the owners first (they would call the Police if we did.)  These neighbors moved from Chicago; it may be OK there?  Workers in my yard shown below (they also hurt my fence...) 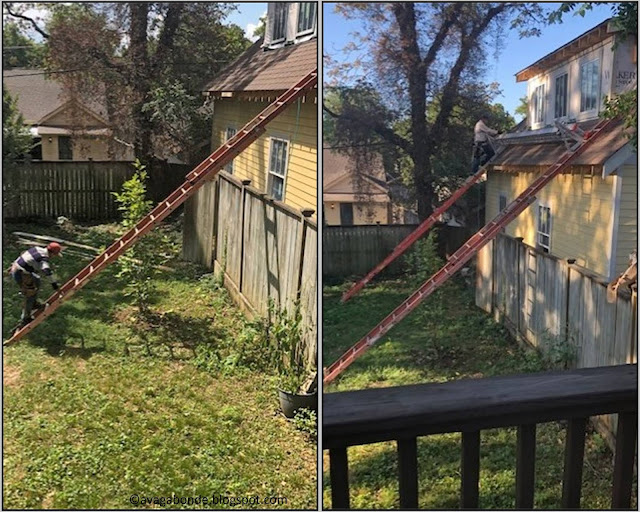 I also figured out the distance from Nashville, TN, to Chicago, IL.  It's about the same distance as from Paris, France to Hanover, Germany - so it's far and that is why, maybe, they have different customs and strange manners (or none.) 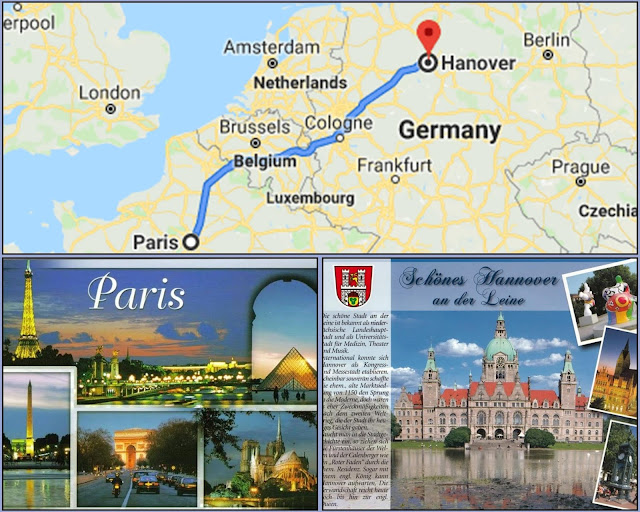 Back in Georgia again since last Sunday I have not done much.  I don't like to write depressing posts but frankly I feel sad.  This has not been a good year - lost the black walnut tree in June 2018, then my husband died in the fall, then our 17 years old cat died in the spring, they my big hackberry was hit by lightning, then my second hackberry was trimmed down by mistake and now my Nashville neighbors show a lack of consideration for me - a bit difficult to be joyful.  But still, I am here in Georgia for several days, surrounded by my old pine trees, and they have such a sweet fragrance. 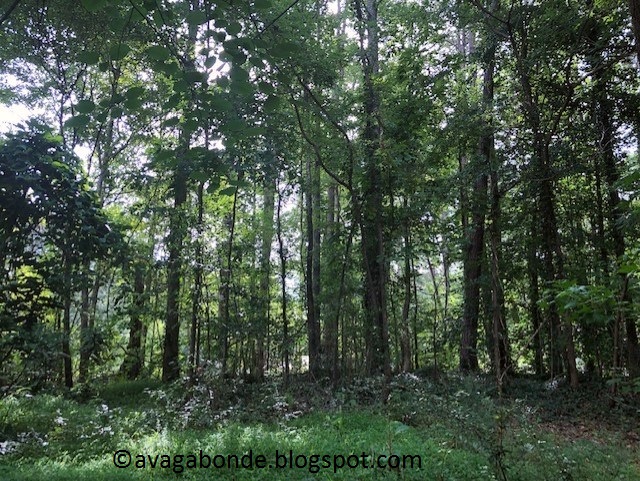