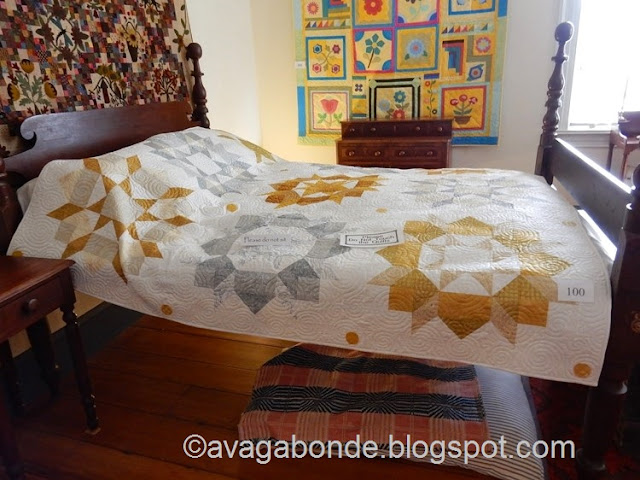 Time is moving so fast that I almost missed Bulloch Hall 34th Quilt Show "the Great American Cover-up Quilt Show."  Fortunately I read a notice about it in a newspaper, just in time.  This year the show was held between March 4 and 13, 2016.  It featured a special exhibit of quilts made by fiber artist Christine Cetrulo of Lexington, Kentucky - however photos were not allowed.  But it was OK to photograph this year's great variety of quilts, about 200 of them, displayed throughout the historic 1840 house museum.  We went on Tuesday, March 8, 2016, a beautiful sunny and warm day - 76 degrees F (24.4 C.)  It is always a pleasure to visit this imposing antebellum mansion in Roswell, Georgia. 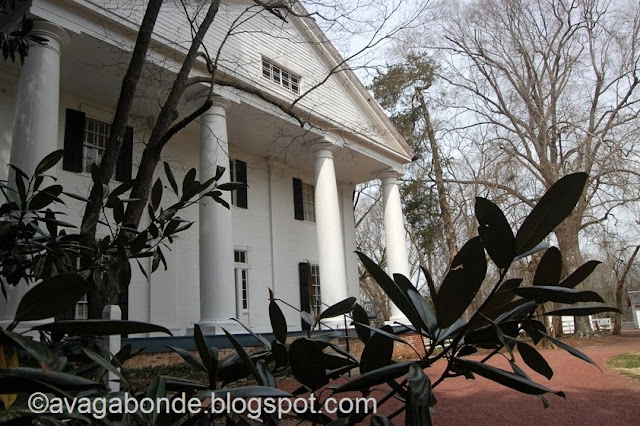 My dear readers have seen several of my posts on Bulloch Hall quilt shows and at Christmas time, when the home is decorated for the Holidays.  This is our 4th year visiting the quilt show; chick here to see the 2013 show, here for the 2014 show, and here for the 2015 show.   Major Stephen Bulloch built this outstanding home for his wife Martha and their six children.  As I mentioned before, their daughter Millie married Theodore Roosevelt, Sr.  Subsequently Mittie and Thee's elder son, Theodore, became the 26th President of the United States.  The Bulloch's younger son, Elliott, was the father of Eleanor, who married Franklin Delano Roosevelt, the 32nd President of the United States. 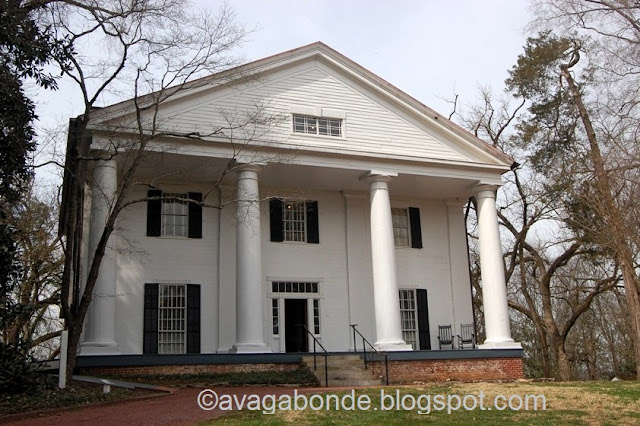 As usual, we were greeted by large quilts hanging in the front hall.  (Please click on collage to enlarge.) 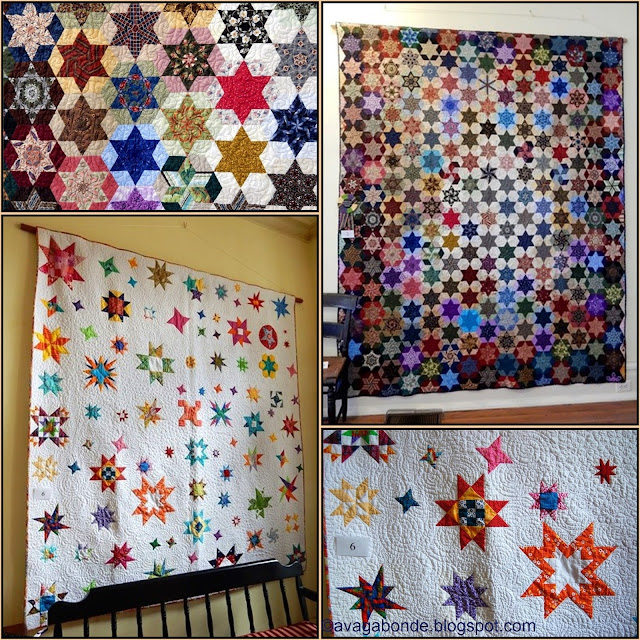 Below, my husband is reading the show brochure while seating in front of quilt no. 1 "Crazy Daisy" by Diane Knott, a local guild member.  This quilt is feature on the cover of Ms. Knott's book "Scrap Quilt Secrets."  More of her work is displayed in other areas of the house. 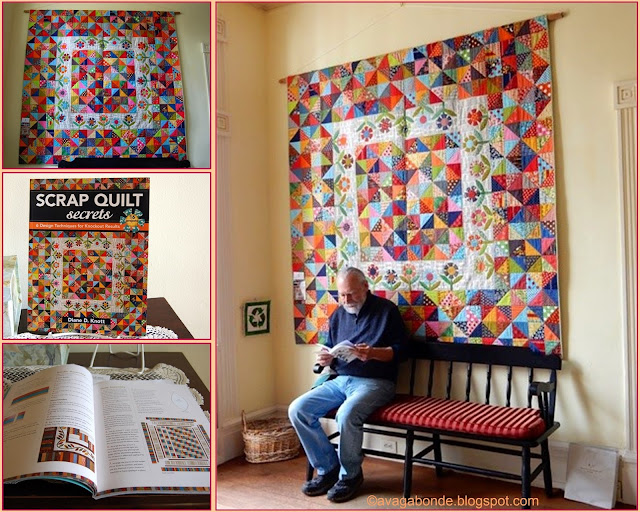 In the back of the front hall was a striking blue quilt, called "Trees in the Moonlight" by Wanda Rose Stewart next to "Stwabewies Peese" by Devon Pfeif that was inspired by her granddaughter. 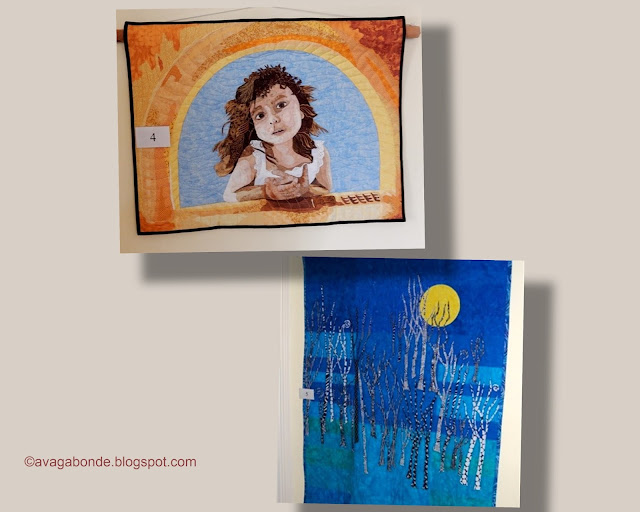 Then we walked into the dining room.  By the fireplace was a quilt that looked like a portrait painting.  It was "Life Journey" a self-portrait by Devon Pfeif who says "Upon completion of a project there are always bits and pieces leftover.  Those are what make up this quilt.  They have traveled with me for 30 years and are my life's journey." 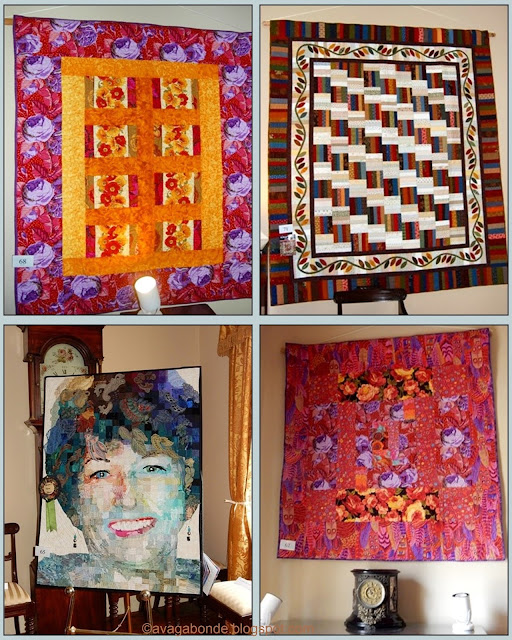 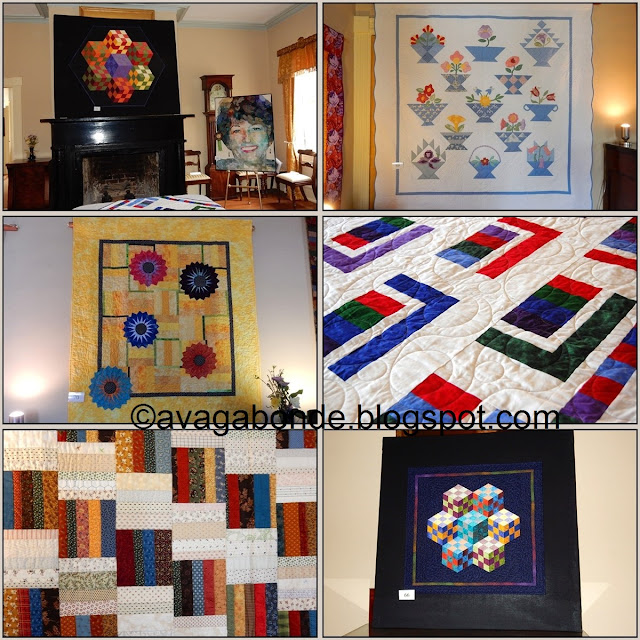 The warming room contained some intricate geometric designed quilts, a quilt on a table and a quilt showing some sweet dogs. 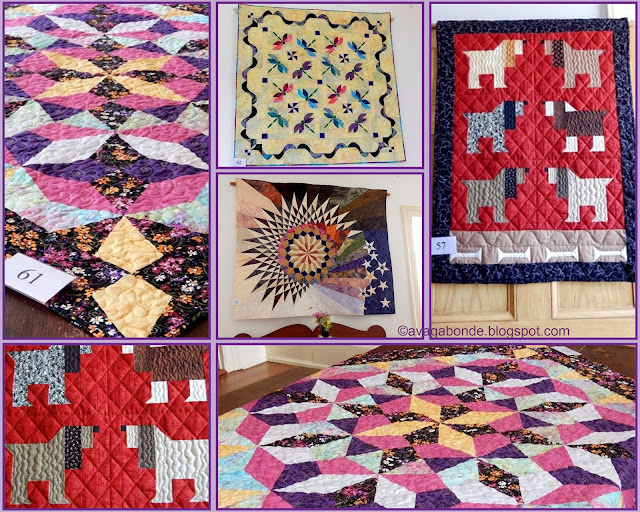 There was also a bright red quilt from Diane Knott's book.  A quilt placed on an easel, called "Caged Bird" by Joyce Daniels, had been inspired by Maya Angelou's book I know Why the Caged Bird Sings.  On the wall was hanging a large quilt made from a multitude of little squares.  It was called "Nationwide Swap" by Sharyl Dawes.  She explained that the squares were accumulated through a Facebook Group.  Each month they exchanged 20 different mini charms. 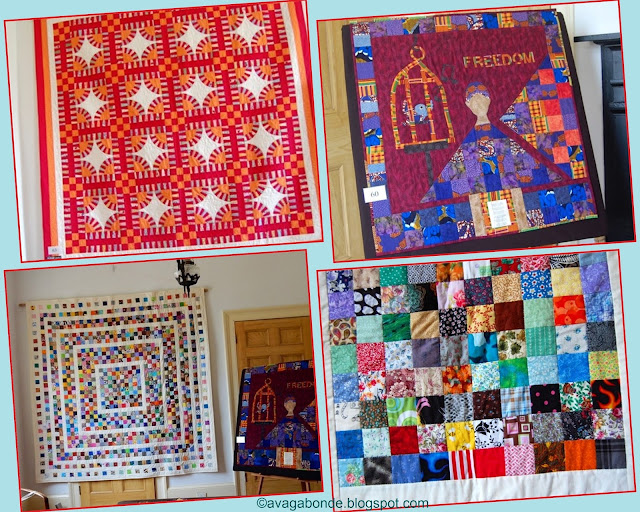 In the back hall quilt no. 52 "Santa Fe Arch" by Ann Quandee was machine appliqued, hand and machine embroidered.  It was inspired by photos from Santa Fe, New Mexico. 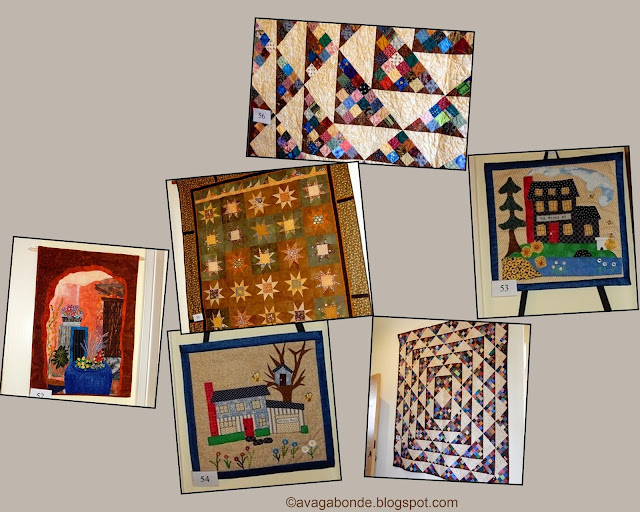 The "Wicked Challenge" quilts were hanging along the staircase.  The 20"x20" quilts were made of specially died green Cheerywood fabrics.  Up at the landing were a colorful owl "Ready for Carnival" and a fun "Night at the Circus" quilts. 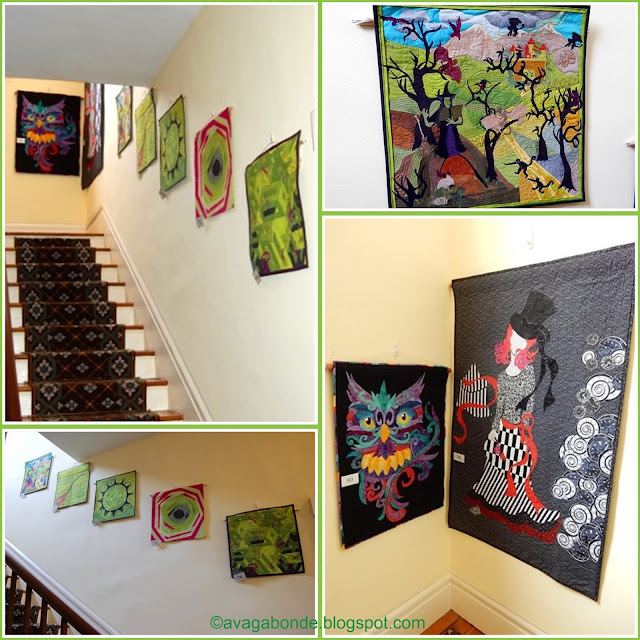 I liked quilt no. 77 by Gail Oliver, called "Awakening Wicked."  She says "Elphaba decides to trust her beliefs and not judge right from wrong based on others' values." 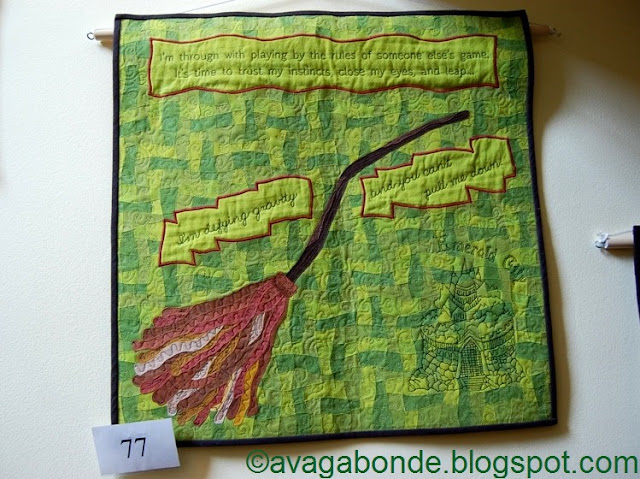 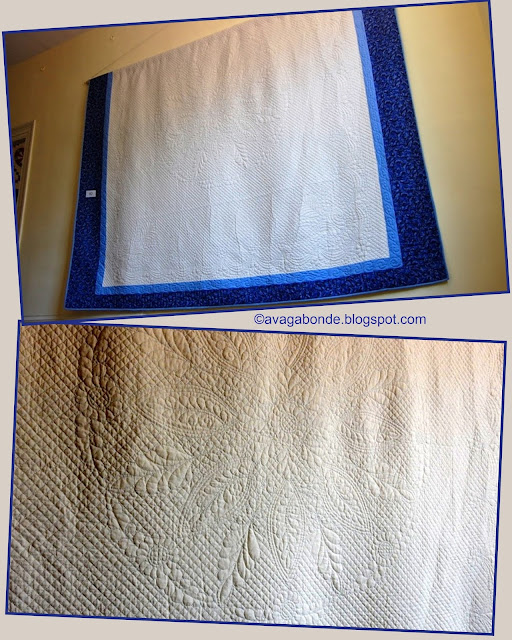 More lovely quilts were exhibited in the upstairs hall, and in the two bedrooms.  Quilt no. 108 below, near the chest of drawers, is called "Magnolia" and was made by Virginia Bradley, age 12, in Edgecomb County, North Carolina in 1863.  Virginia died a year later due to the diseases of the Civil War. 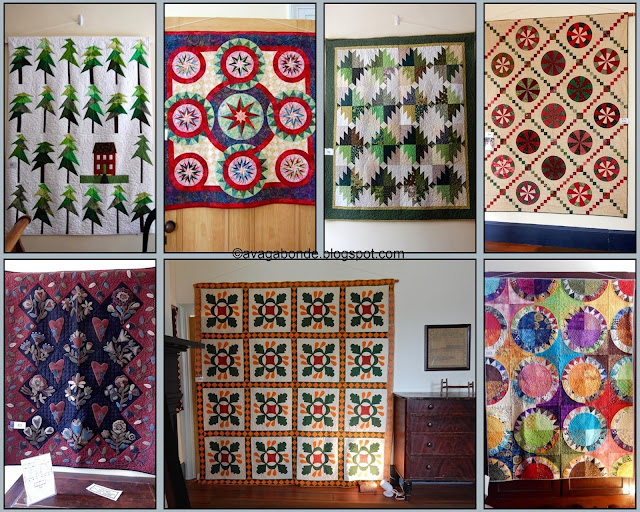 A guild volunteer was working on a quilt in one of the bedrooms.  She told me the pattern was called "stained glass window."  On the bed, a blanket had white applique designs - it is no. 91 called "Snowflakes" by Nancy Summa (top right below) who says "Since my husband is a retired Army, the use of his Army blanket makes the piece more meaningful."  I had never seen a plain wool blanket embellished like this.  It looked very pretty, indeed, for a rough Army blanket.  No. 84, in the center below, is "New Zealand Memories 2015" by Emily Wert.  She says "My husband surprised me with new wedding bands inscribed in Elvish on our 34th anniversary trip to NZ."  This quilt is made with fabric printed pictures and New Zealand fabric. 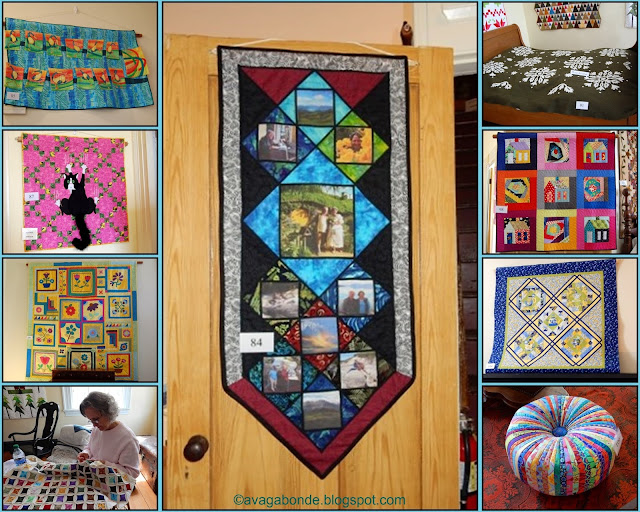 The quilt behind the bed is called "Kneeded Distraction" and was made by Shari Chastain of Kennesaw, Georgia (top right below.)  It is a play on word as she says that she stitched the blocks during recovery from two knee replacement surgeries.  Quilt no. 100, on the bed, is called "Swoon" by Jan Antranikian and is shown at the top of this post. 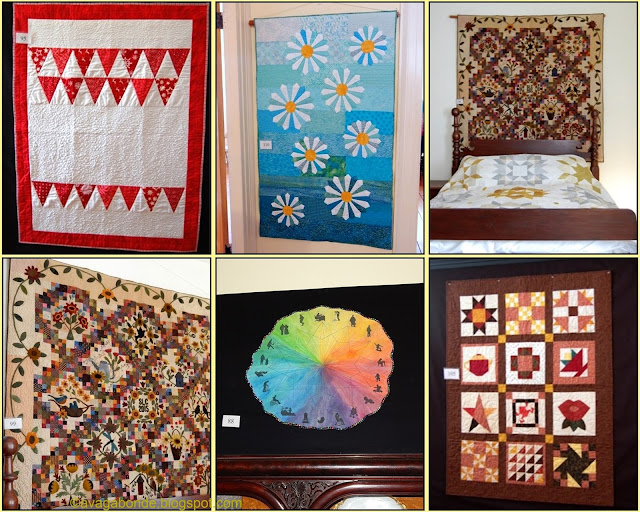 On a table in Mittie's bedroom was a sweet little quilted piece near the book "Mittie and Thee - An 1853 Roosevelt Romance."  The quilt is called "Les Coiffes Catalanes" by Jean Sands.  She says "Six vintage traditional head gear from the Pyrenees Orientales region of France were disassembled to make this wall hanging."  Below are two postcards of French ladies wearing the traditional costume from that area, next to a map of France showing Departement no. 66, the Pyrenees Orientales (bottom of map and filled in red.)  This French Departement is located near the Spanish border and the tiny nation of Andorra. 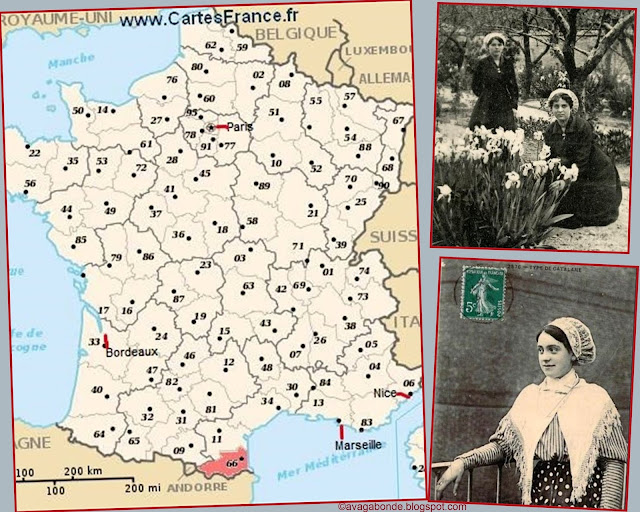 The pictures of the ladies on the little white quilt mentioned above are wearing Victorian clothes and go well with the lace and trim around them.  Even with an old-timey style this quilt has more the approach of a modern "improvisation" quilt because of the asymmetry of the background. 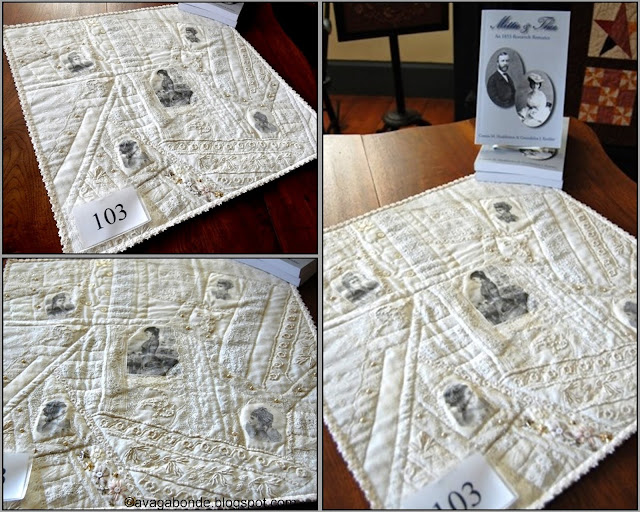 Most of the quilts exhibited at Bulloch Hall were of the traditional style, and they were gorgeous.  But I also like the artistry of modern quilting - the improvisations that show the personality of the quilter.  My blogging friend Ruth of the blog "Birds of the air quilts" is a creative modern quilter - below are two of her quilts: "Nancy's macarons" inspired by a painting of Paul Klee, and an urban modern garden improv from Virginia Woolf's book Mrs. Dalloway. 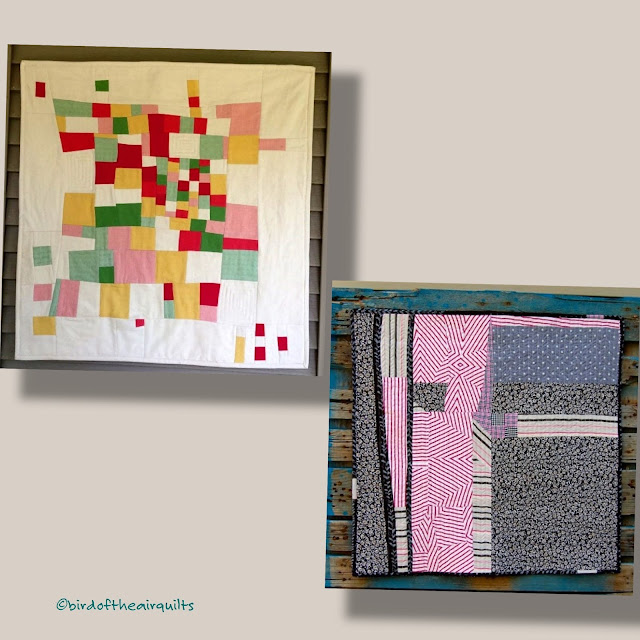 Another quilter, Cassandra of the blog "The [not so] Dramatic Life" quilted a vibrant mini improv quilt with scraps of lovely shades.  See below her "Blue Improvisation: Mini Quilt #6." 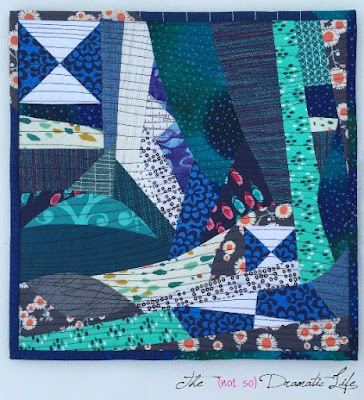 Both of these gifted ladies have a new approach to quilting that is original and innovative.  Their quilts are stunning and I thank them for letting me show their work on my blog.

Another quilt I liked very much was called "Raven Stealing the Sun" by Stella Lang. 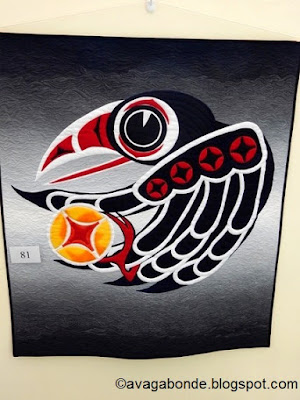 Stella says that her quilt was inspired by legends from Indians of the northwestern United States.  But when I saw it, I immediately thought it was representative of Canada First Nations people, especially Coast Salish artists.  We went to Vancouver Island, British Columbia, Canada, three times and I bought several postcards of drawings made by Pacific Northwest Native people.  Some of these were drawn by artist Joe Wilson, born in Koksilah, near Duncan on Vancouver Island.  See examples below.  I love the great native art on Vancouver Island. 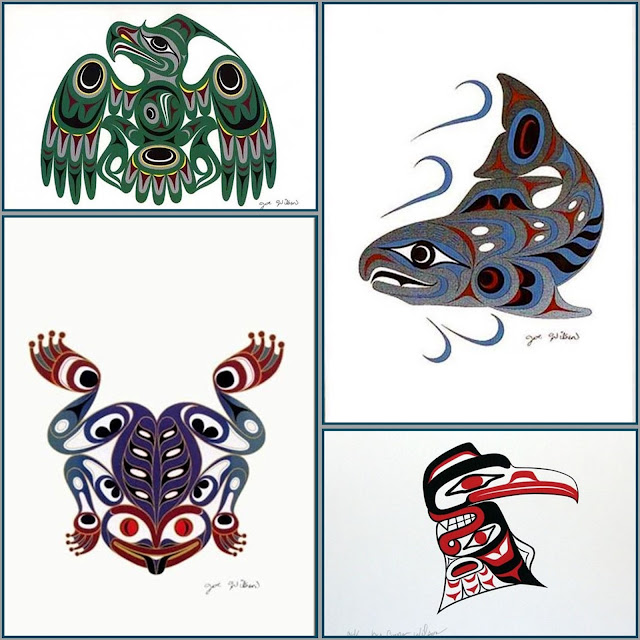 Now I still have photos from the quilts in the attic of Bulloch Hall, plus the sewing room and two rooms downstairs - they will be included in part 2 of this post. 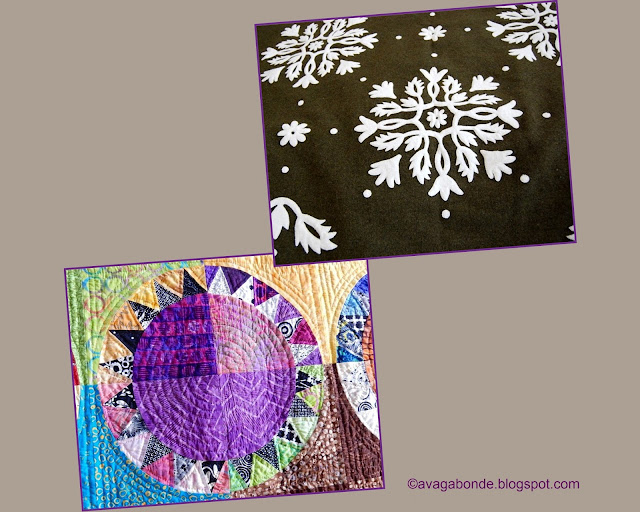 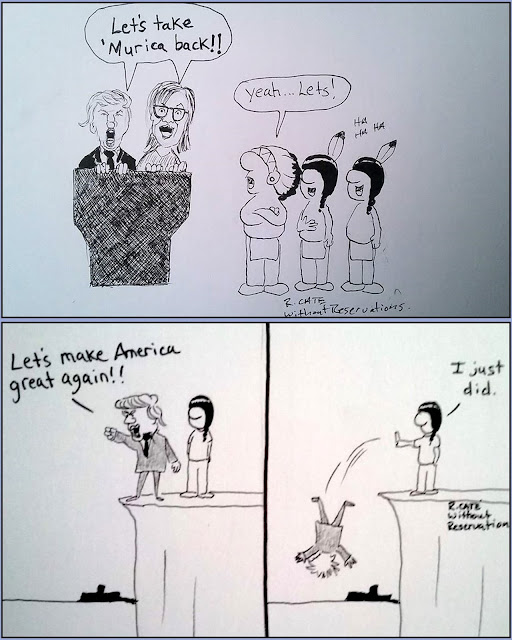