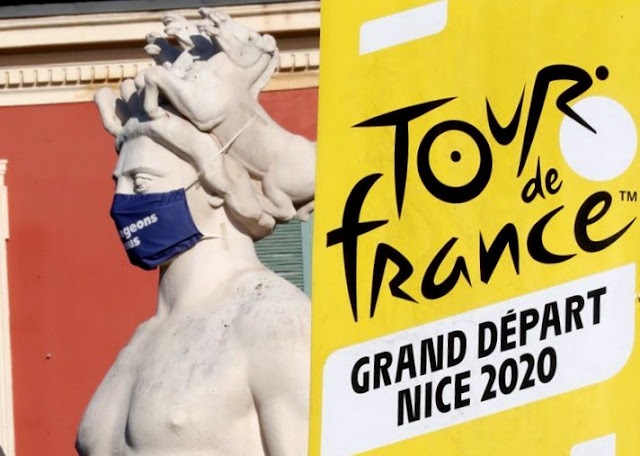 The month of July came and went and no Tour de France to watch.  For a while we were afraid it would be cancelled because of COVID-19, but it was postponed until September.  I watched it on television or by streaming on my iPad.  As you can see from the heading photo (courtesy Nice Matin) the 2020 Tour de France started on the French Riviera in Nice.  Below is the route. 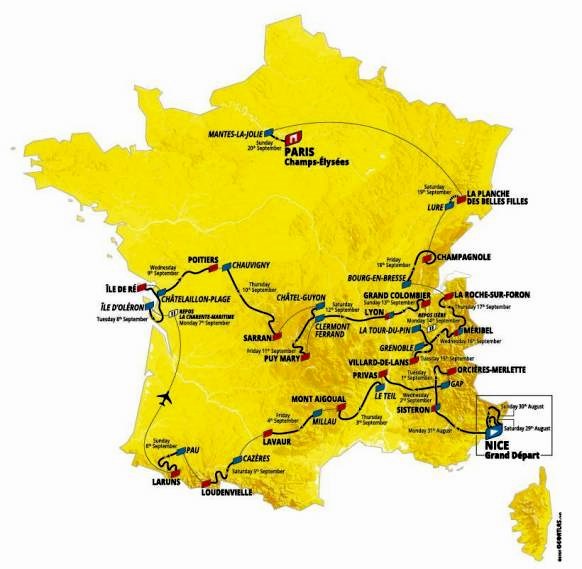 The 107th Tour started in Nice on August 29, 2020 and concluded in Paris on September 20, 2020.  It ran for 23 days with two rest days.  The total distance was 3,484 km or 2,165 miles.  There were a total of 176 riders from 22 teams (8 riders per team.)  The 21 stages included 9 flat, 3 hilly, 8 mountain stages and 1 individual time trial.  For more information on the Tour de France in general, please go to Tour de France on the right of my blog under Categories.  It was odd to see the riders wearing masks.  Below in black is Colombian Egan Bernal who won the Tour in 2019 and in green my favourite rider from Slovakia Peter Sagan. 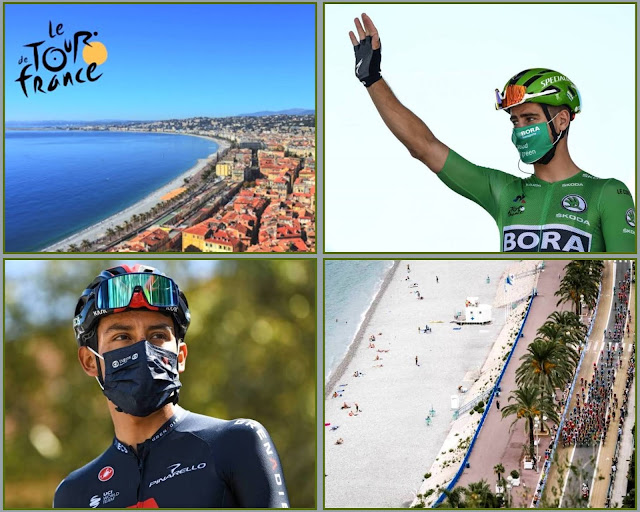 This year I did not watch the Tour as carefully as in previous years because there were many riders I did not know.  But as usual the landscape views along the route were outstanding.  I took more pictures of the sights than the riders and with 21 days of viewing I ended up with over 200 photos.  The commentators give facts on culture, castles, churches, villages, history and natural sights of each area of the stages.  Some of my friends watch the Tour just to see the landscape and listen to the cultural information.  Two helicopters follow the Tour and four motorbike photographers along the route capture all these lovely shots.  You can see the helicopter above the mountainous road below, at 12 o'clock, and the motorbike photographers. 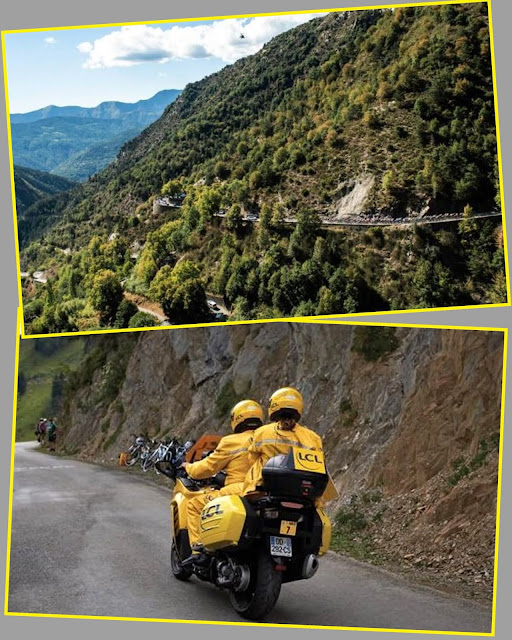 Below views from stages 1, 2 and 3 - please click on collage to enlarge. 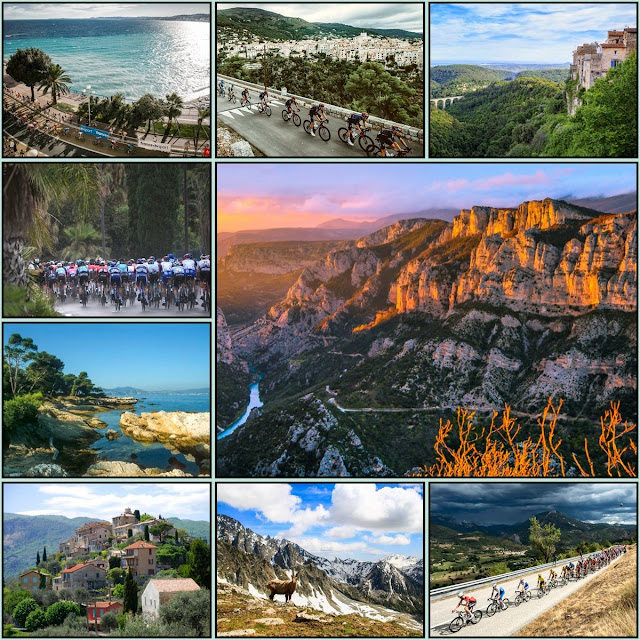 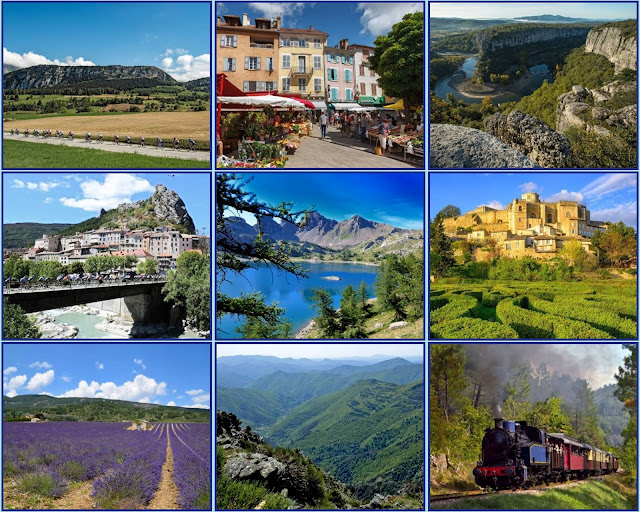 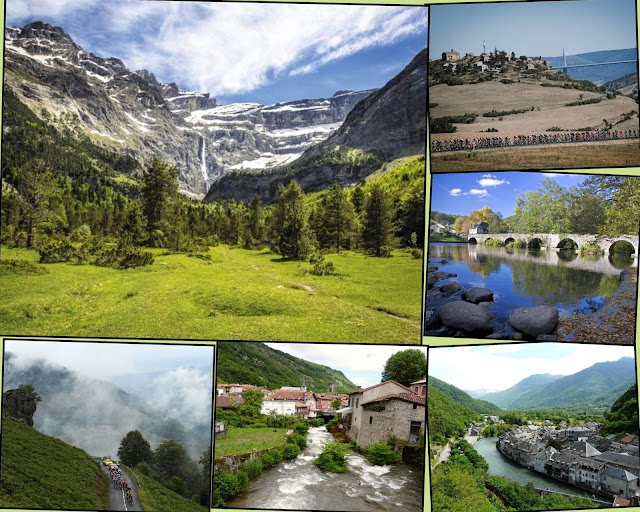 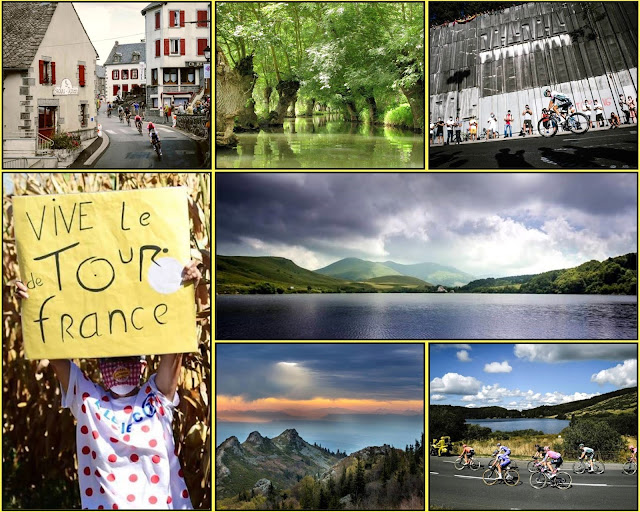 As the helicopters were flying over the western central area of France the commentators mentioned that near the city of Vasles was a sheep reserve.  I was intrigued and looked for it.  It is called "Mouton Village" (mouton is sheep in French.)  It is a large protected park planted with more than 4,000 trees: araucaria, eucalyptus, etc. to house the sheep in their original habitat.  It is the first park in France to host twenty-two sheep breeds from around the world, such as the "rabbit-headed" sheep (Border Leicesters,) the Racka sheep from Hungary with their unusual spiral-shaped horns and the Romanov from the Upper Volga in Russia.  Below are some of their sheep (the park can be visited by the way) - 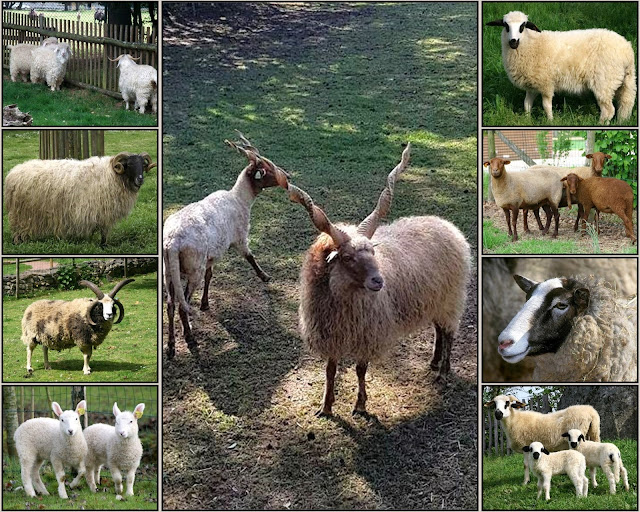 The small town of Vasles (population 1,100) also counts two castles: an old medieval one built between 1467 and 1471 and a private one, called Castle of the Sayette.  I checked this last one and found out that it has been the home of 26 generations or seven centuries of de la Sayette family.  They opened a small hiking trail on the castle ground last year and the sheep from Mouton Village used it to move to higher fields during the summer.  Below is the Chateau de la Sayette. 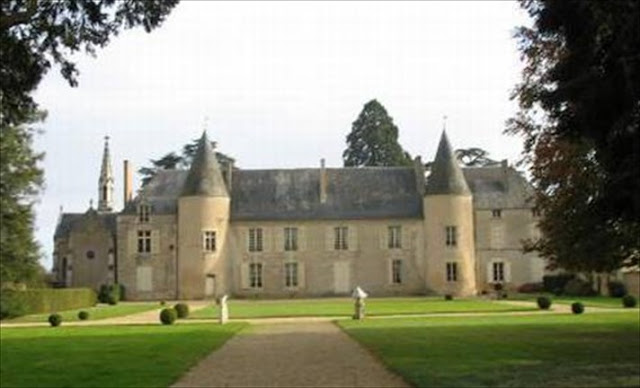 The helicopters often take close-ups of the castles below.  The commentators seem to be working for the French Tourist Office because they immediately enumerate all the pertinent historical details of the various landmarks - such a great variety of castles to stare at from my den sofa ... 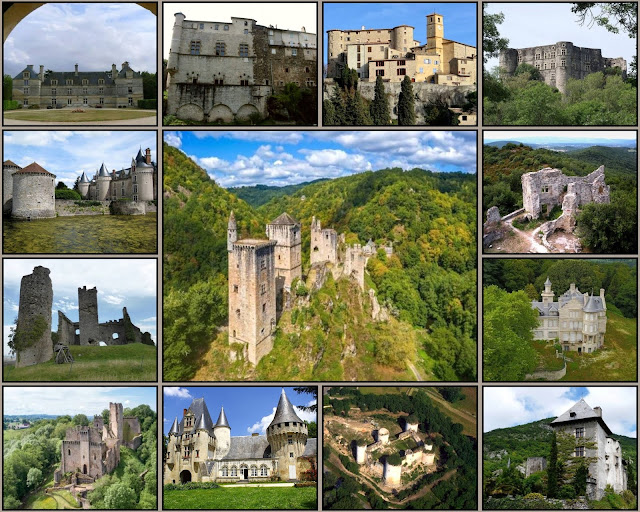 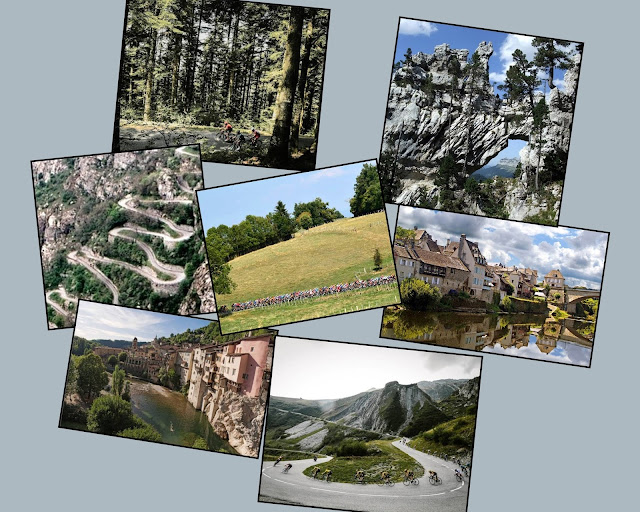 There were fewer spectators along the route this year but those present were following recommendations to wear masks and to keep safe distancing.  The riders themselves, when not in the race, were wearing masks.  The devil was also wearing a mask (this devil fan has been in the sidelines of the Tour since 1993.) 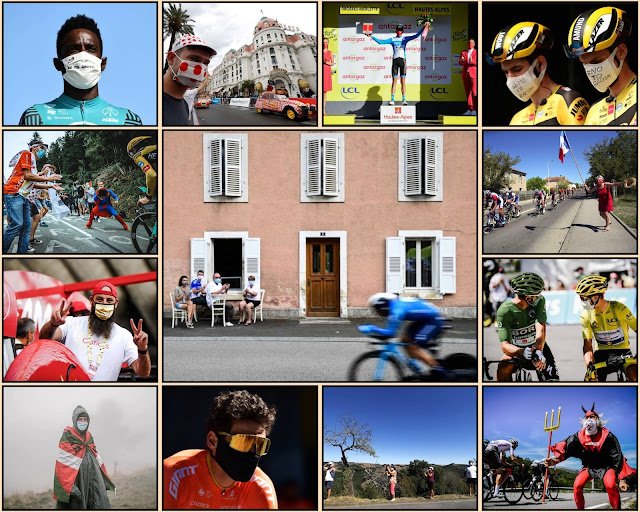 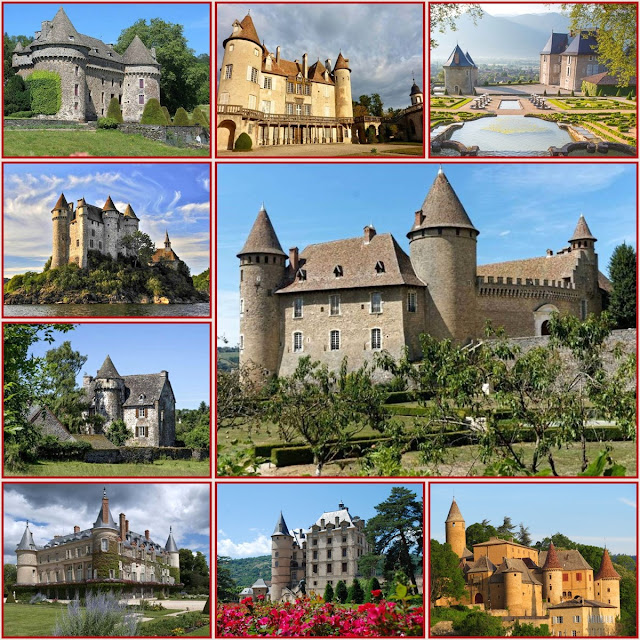 The castle in the center of the collage above is the Castle of Virieu.  It was built in the 11th century by Wilfrid de Virieu.  In the 18th century it was remodeled and extended.  Some of the interior rooms can be visited as well as the main courtyard displaying cannons given by King Louis XIII in 1622.  The family also hosts fairs and festival on the castle grounds.  Since the 13th century the de Virieu family has also owned another castle nearby, the Castle of the Pupetieres, shown in the extreme bottom left of the collage below. 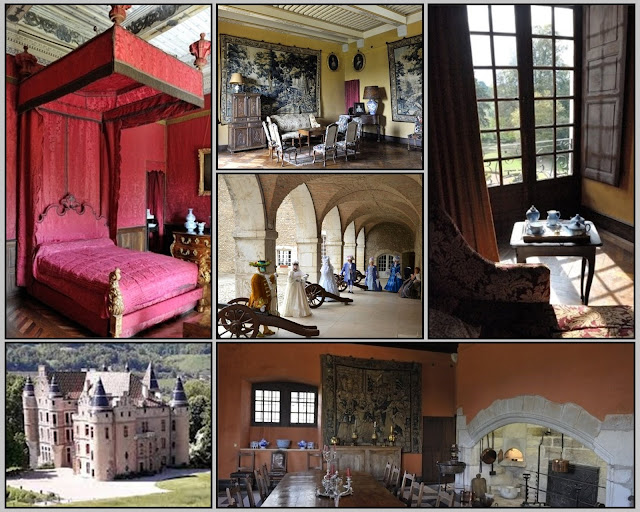 Below is a painting of the Castle of Virieu by British artist Richard Cole. 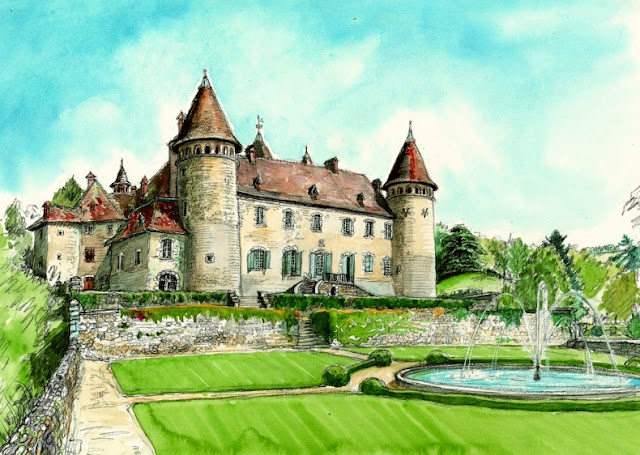 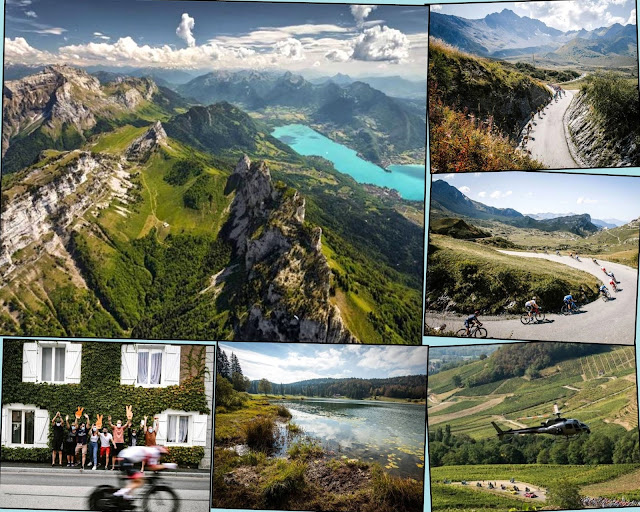 Toward the end of the Tour it was obvious it would be won by either of the two Slovenian riders.  Slovenia? It was not a country I studied when I was in school back in the days, so I checked.  A Balkan country, the Republic of Slovenia was the first republic that split from the former Yugoslavia and became independent.  Its population is only 2 million.  It is located in central Europe and bordered by Italy, Austria, Hungary and Croatia.  It is shown in red in the map below. 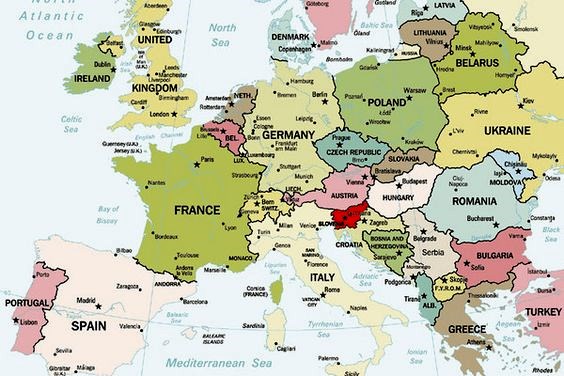 Slovenia is a stunning little country with glacial lakes, spectacular mountain peaks, clear blue rivers and extended forests.  Rick Steve, the American Travel Writer, says of Slovenia: "...It is an underrated gem in the heart of Europe ... Located where the Germanic, Mediterranean and Slavic worlds come together, Slovenia enjoys a happy hodgepodge of cultures while also presenting plenty of its own unique character.  And much like the country as a whole, its capital city of Ljubljana is a delight to explore, yet remains relatively undiscovered... Tiny, overlooked Slovenia is one of Europe's most unexpectedly charming destinations..."  Below are some photographs of Slovenia courtesy Rich Steve and the Slovenian Tourist Bureau. 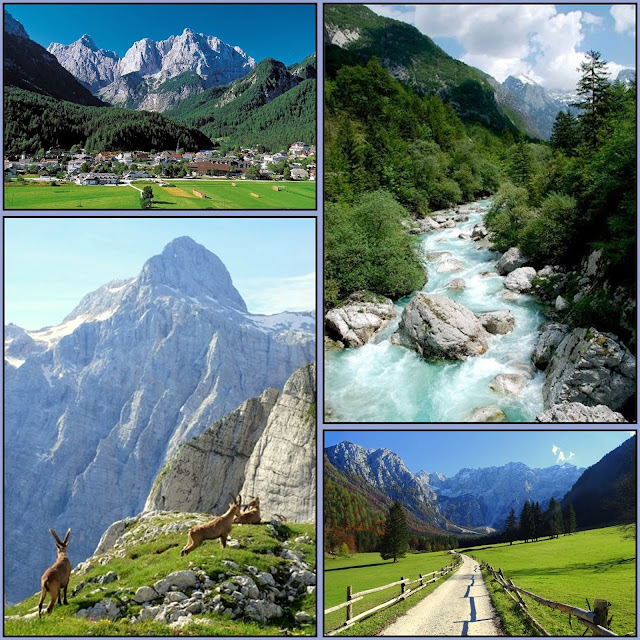 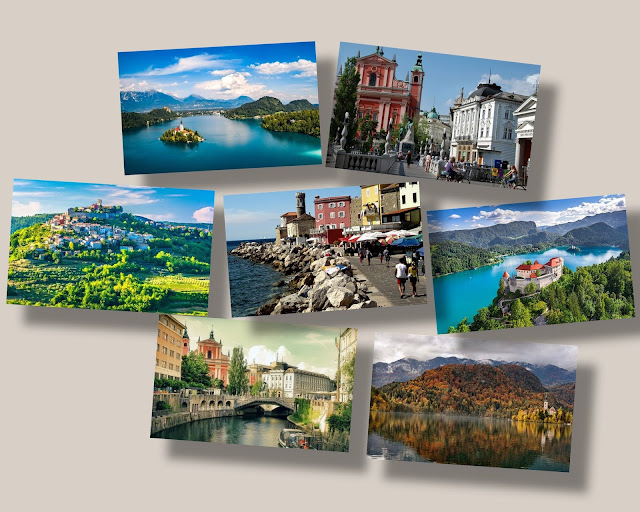 On Sunday morning September 20, 2020, my cat Mitsouko and I watched TV for the conclusion of the Tour de France.  It is always a treat to see the riders arriving in Paris along all the favourite landmarks.  The City of Paris had only allowed 5,000 spectators; the streets were almost empty. 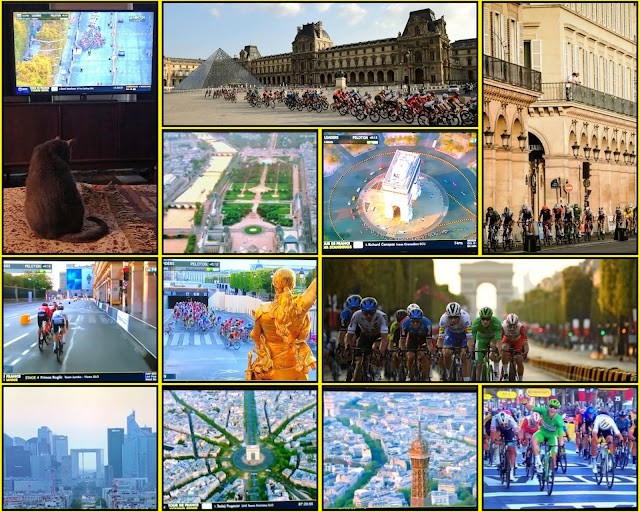 Then it was over.  This is the general ranking: overall first place winner - Tadej Pogacar of Slovenia for the team UAE.  He also won the polka dot jersey as best climber and white jersey as best young rider.  2nd overall place - Primoz Roglic of Slovenia, 3rd place Richie Porte of Australia.  The green jersey (fastest runner) went to Sam Bennett of Ireland.  The most combative went to Marc Hirschi of Switzerland.  The winner, Tadej (pronounced TaDay) born on September 21, 1998, was the youngest cyclist to win the 2019 Tour of California.  He also won 3 stages in this Tour de France.  He is the first Slovenian winner of the Tour de France and at 21 became the second youngest winner since 1904. 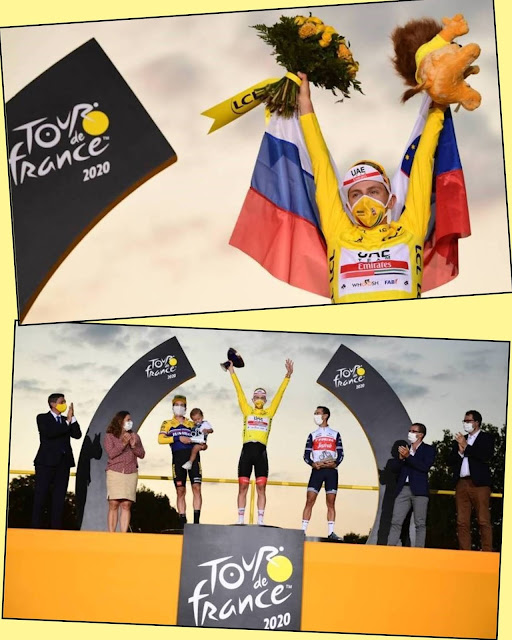 I took a last picture from my TV screen as the sun was setting over Paris. 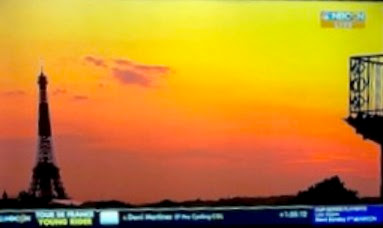