Spring in Nashville and Atlanta ... and the French elections 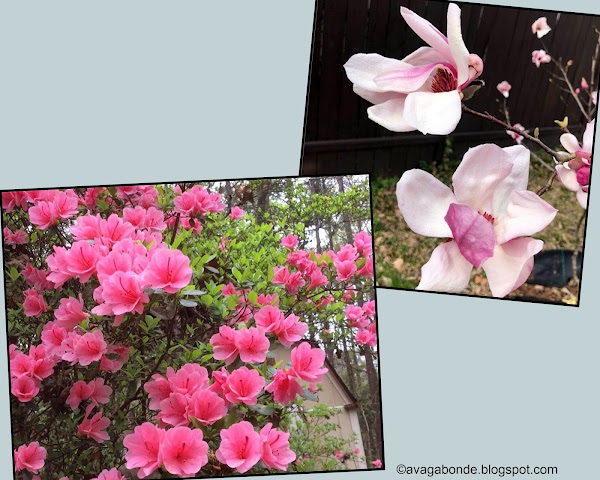 With the weather so erratic, we had warm days in winter and freezing days in spring. Last January, soon after the Holidays, it snowed in Nashville. I was supposed to drive to Georgia, but waited. A week or so later, it snowed again - which is pretty unusual for Nashville. Below are pictures of the snow from my front porch, on the left, and back porch. 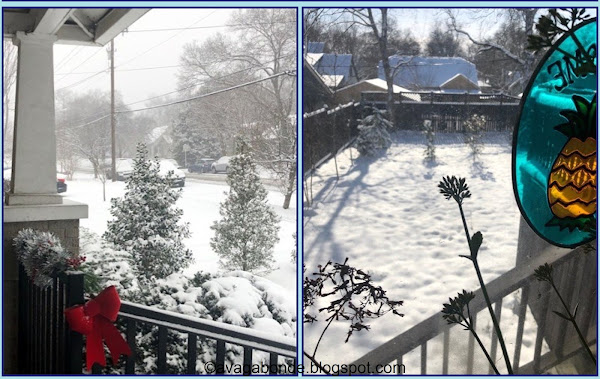 But then in early February it warmed up so much that my three year old's Saucer Magnolia (magnoliaxsoulangeana) in Nashville bloomed nicely. 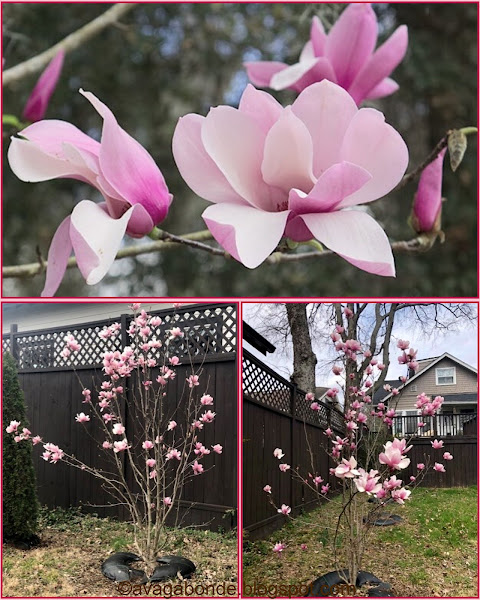 Meanwhile when I returned to Georgia it looked like winter and was very foggy. The woods around the house looked ominous. 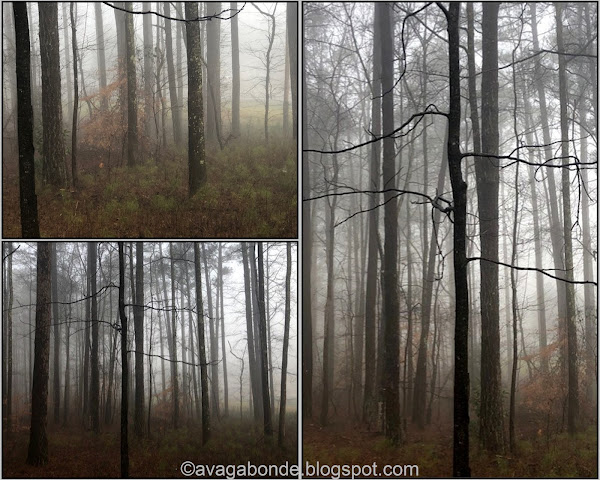 Then a couple of days later it was sunny and daffodils could be seen in many Georgian gardens. 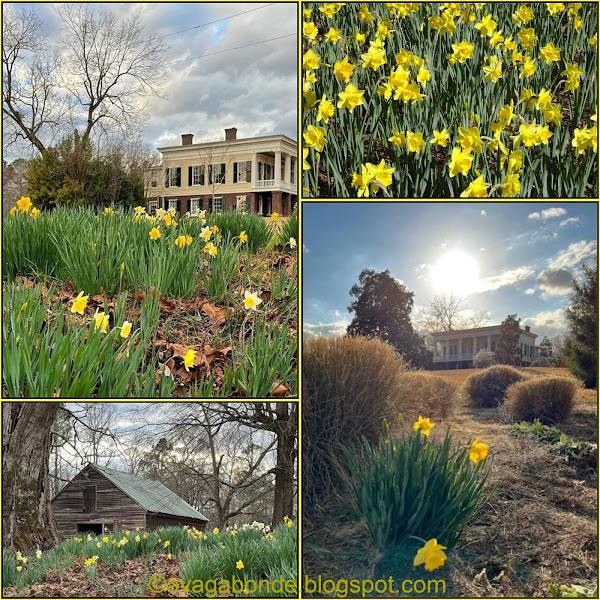 Returning to Nashville, spring was gone and it snowed again. 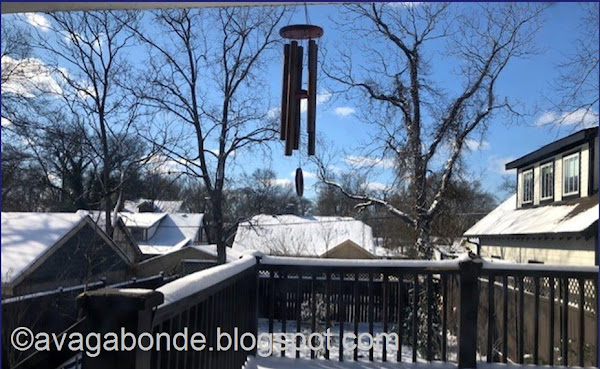 A week later the warmth came back. Trees and shrubs were in bloom such as my Yoshino Cherry Tree and flowering quince shrub. 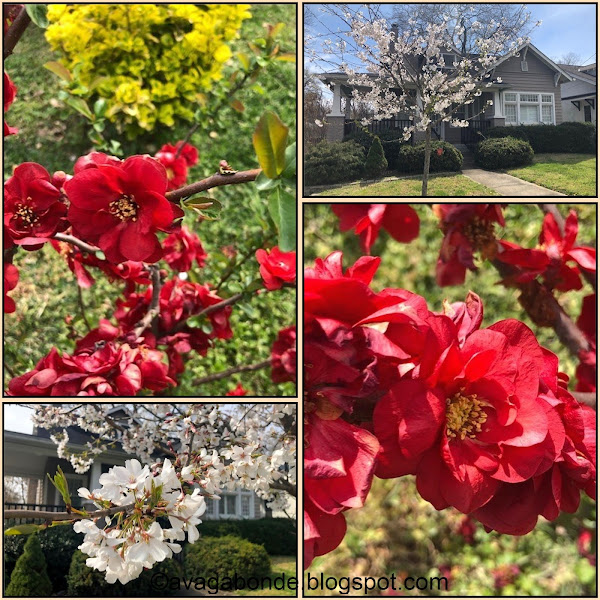 In Mid-April I returned to Georgia for a couple of weeks as I had to vote at the French Consulate in Atlanta. I could not vote in Nashville as there is no French Consulate there. The blooms on my azaleas were almost gone. 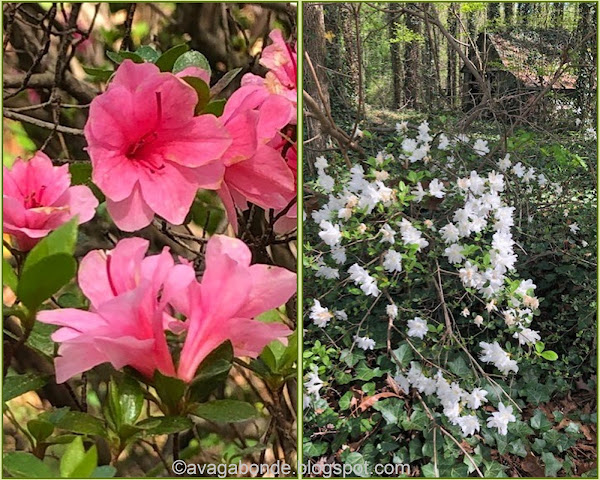 Several years ago my late husband and I found a tiny maple tree, about one foot tall, in our Georgia front yard. We transplanted it to a better area. I was surprised last week to see the tree was now taller than me. 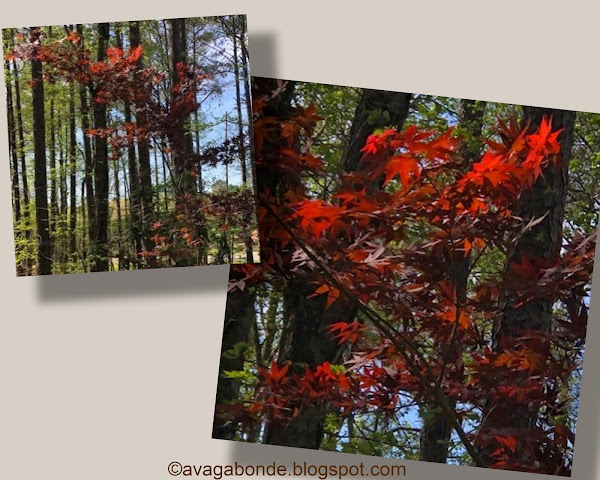 The second tour of the French presidential election was on Sunday April 24, 2022, but because of the time difference the French overseas or living abroad had to vote on Saturday April 23, 2022. The Consulate General of France in Atlanta has jurisdiction over the U.S. Southeast for the states of Alabama, Georgia, Mississippi, North and South Carolina and Tennessee. I already drove the 9 hours round-trip to Atlanta to vote for the US presidential election since I am a dual citizen (and my main home is still in Georgia,) so did it again for the French elections. The Consulate is located in the Buckhead area of Atlanta near the upscale Lenox Mall in a tower adjacent to the Mariott Hotel. 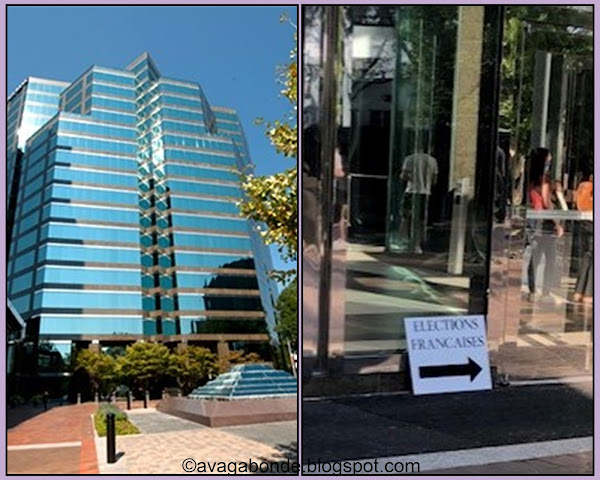 Early on Saturday April 23 I drove to Buckhead Atlanta (a 45 minutes drive.) Already there was a long line of voters waiting in the lobby of the tower. French IDs or passports were verified then small groups of voters were led to an elevator. Once on the 11th floor there was another line. Two small pieces of paper were given, one reading Macron and the other Le Pen. You proceeded into a small booth and placed your choice into an envelope. Then you inserted your envelope in a large clear box. Your name was crossed off the list of registered voters. Voila! Easy peasy. (Click on collage to enlarge.) 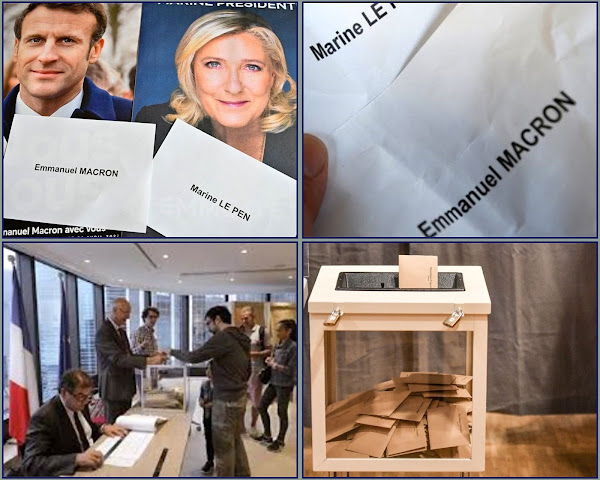 I had not seen so many French people in a long time. The French Consulate showed how many French people living abroad are registered to vote. The highest number is in Switzerland - 174,820, a small country the size of Vermont and New Hampshire combined. In the whole USA there are only 136,533 registered French voters - a small number considering that almost 200,000 US citizens live in France, which is smaller than the state of Texas. 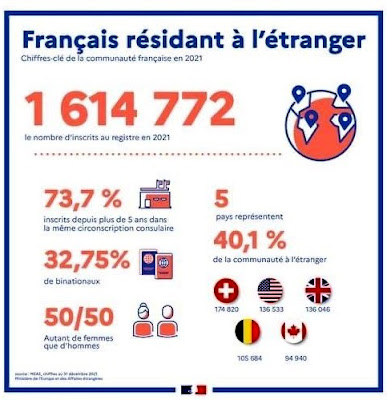 This is the first time since I have been in the US that I have heard so much about a French election in the US news and media. I guess it was because of Marine Le Pen, the extreme far-right candidate. Here is a sampling of her platform: No more Muslim headscarves in public, to be sanctioned by the Police. All schoolchildren to be in uniforms. Catholic nativity scenes to be shown in all public places and only Catholic Holy Days to be allowed. Generous social services unavailable to foreigners unless they've held a job for five years and if not, they are to be returned to their home countries (bye bye long time Brit and US residents.) Limit French nationality to French born from French born parents only. 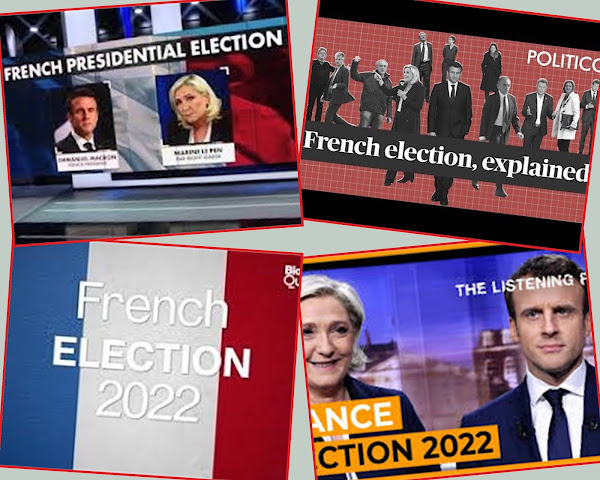 Le Pen would pull France out of NATO's military command, leave the Euro zone and reinstate the Franc, weaken the Western military alliance, get out of the EU, make a strategic rapprochement with Russia (oppose sanctions against Moscow) and "away from the US sphere of influence." An admirer of former President Donald Trump, Marine Le Pen copied his MAGA (make American great again) into "make France sovereign again." Her political brochures had showed her with Vladimir Putin; she obtained millions in loan from Russia for her campaign. She told the BBC: "The main lines that I defend are those defended by Mr. Trump and Mr. Putin." Below are some cartoons on Marine Le Pen. (Courtesy Franc-Tireur, Timeslive za, Charlie Hebdo and Irish Trinity News.) 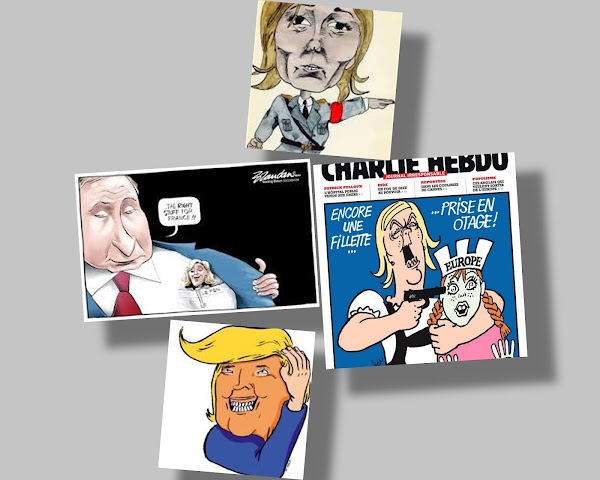 The French Embassy in Washington, DC, showed the French election results per each French Consulate in this country. In Atlanta the results were Macron 87% le Pen 12%. The highest were in Boston, Macron 95.48% Le Pen 4.52% and the lowest in Miami, Macron 75% Le Pen 24%. It was a nice election spring day in Atlanta. 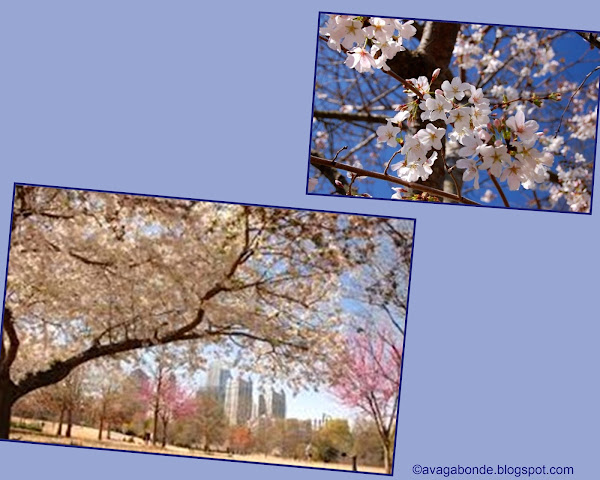 The Miami, Florida, results go with the territory where that state has one of the most extreme right wing government. My friends overseas may not know that lately Ron DeSantis, the Florida Governor, had a law passed, House Bill 1467, which allows books and textbooks to be banned in schools and school libraries. Anyone or a librarian providing "prohibited" material to a student could be charged with one felony per book. So far 200+ books, including classic or a book like "Who is Barack Obama?," have been banned in Florida and 74 math textbooks. When books are banned, students are curious and seek them out. Tennessee banned the Holocaust novel "Maus" from the classrooms and its sales went way up. Last Wednesday, Tennessee Representative Jerry Sexton said he would burn books that were considred inappropriate for school libraries. In 2021 more than 1,500 books were banned in the US. I have not heard of any library book killing a child, but since the Columbine High School shooting in 1999 more than 300,000 students have experienced gun violence in schools. In 2021 alone 34,000 students were exposed to gun violence = so, why are guns not censored instead of children books? 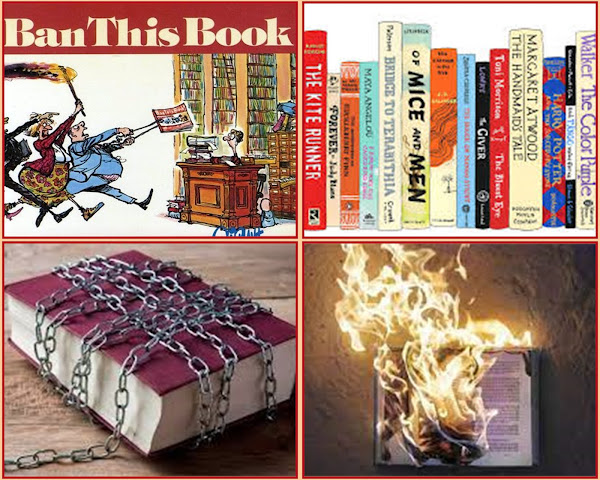 There are no answers to such nonsense. But it is springtime, flowers are blooming again, days are getting longer, grass and plants are vibrant once more, birds are abundant, and trees are turning different shades of green. After two weeks clearing the Georgia house I would have liked to visit a public garden - maybe next time. Trees and weeds have grown so much in the backyard in Marietta since I partly moved to Nashville that you can barely see the lake in the backgrouond - see photo on left. 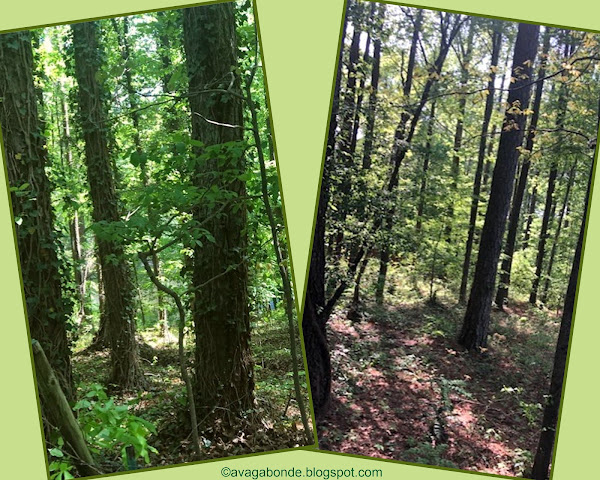 Pine trees have been a symbol of strength, steadiness, resilience and wisdom. Maybe to share such benefit I often sat in my backyard in the sun watching nature taking over the land and smelling the southern pine trees. 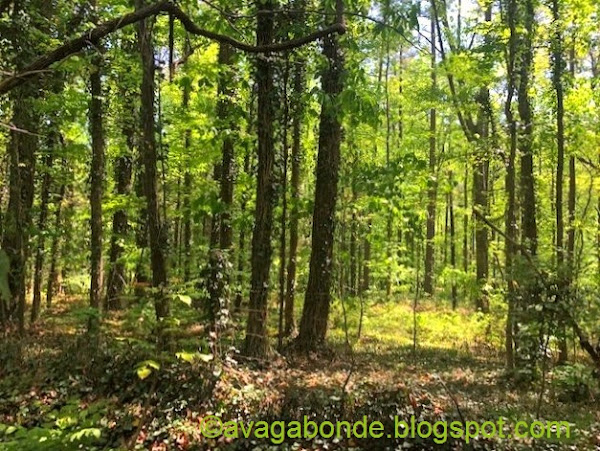