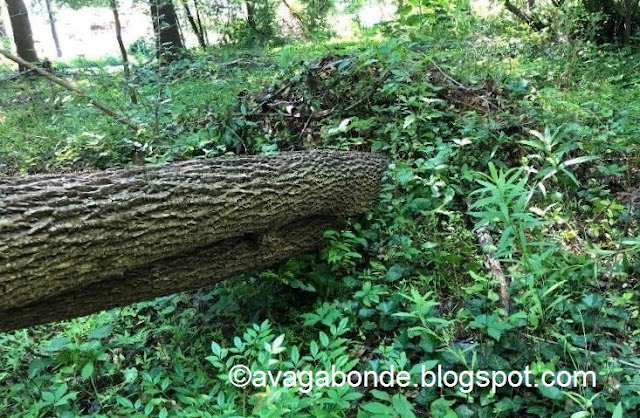 Years ago, when we moved to Georgia, we first rented a small house in Decatur, east of Atlanta and then we bought a house.  But when the first grade teacher of our eldest daughter told us that she was gifted we decided to move to a county where the school system had a gifted class program.  In 1976 we decided on Cobb County because we had a friend who lived there.  On the map below, Decatur is on the middle right hand side and Cobb County, where we moved next, is on the upper left of the map. 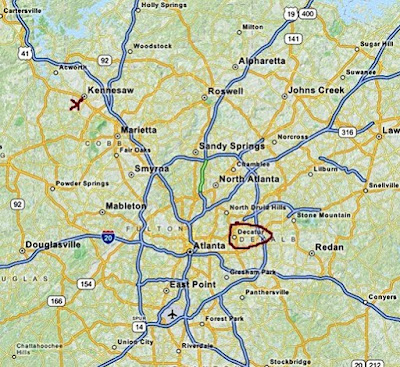 This friend had a lovely garden with many roses and ornamental bushes in his 1860 era historic house off the Marietta square.  In 1980 or maybe 1982 he gave me a shoot from his fig tree.  We planted it on the side of our house.  It grew into a large tree, higher than our roof.  It provided us with sweet figs every summer.  I made fig jam for years.  The last bunch I made from that tree, shown below, was in 2014 because that winter an ice storm froze our fig tree to the ground, and it was gone. 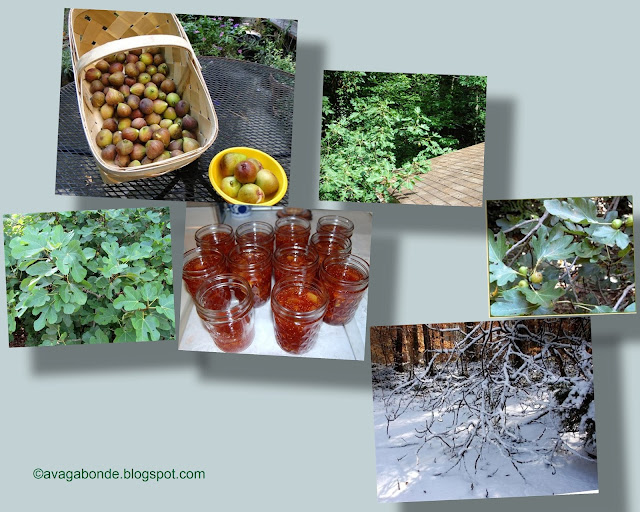 At the same time our friend had given my husband a shoot of his black walnut tree.  We planted this shoot in the front yard and a couple of years later, two trunks developed from the base.  The tree grew well and my husband loved it.  The Black Walnut tree is native to eastern North America (Juglans Nigra) and produces nuts in the fall. After several years our black walnut tree gave us black walnuts.  I never ate them because their thick covering is so tough that unless you drive on top of them you can't remove it to get to the nut kernels.  I did eat black walnuts that I bought at the market.  They have a more robust and pungent taste than the common English walnut.  Below are two engravings from circa 1865 which show the tree, the leaves, the green outside cover and the nuts. 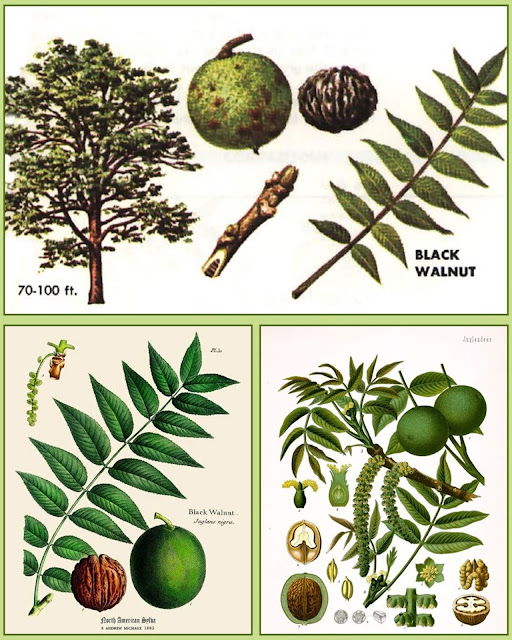 Below is a photo of a black walnut tree like ours - with two trunks.  The leaves of this tree are dark green, rounded at the base with a long point; they feel soft and hairy on the underside.  The covering of the new nuts on the tree is lime green.  In the fall the leaves turn bright yellow. It really is a pretty tree. 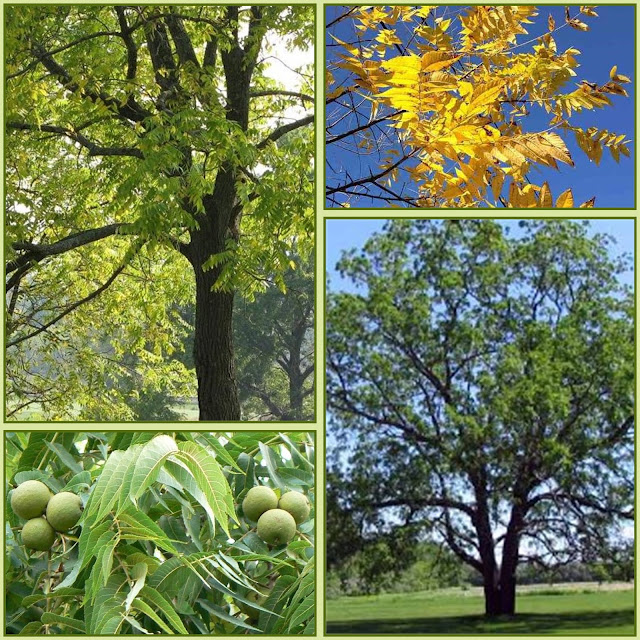 Some years we did get a good crop of nuts and they delighted the squirrels - the nuts disappeared quickly.  In December 2016 I gathered the nuts in a basket to show on one of my Chalkfest posts.  The nut covering had by then turned yellow and even black.  This hard shell is quite difficult to remove from the kernel and will stain your hands badly. 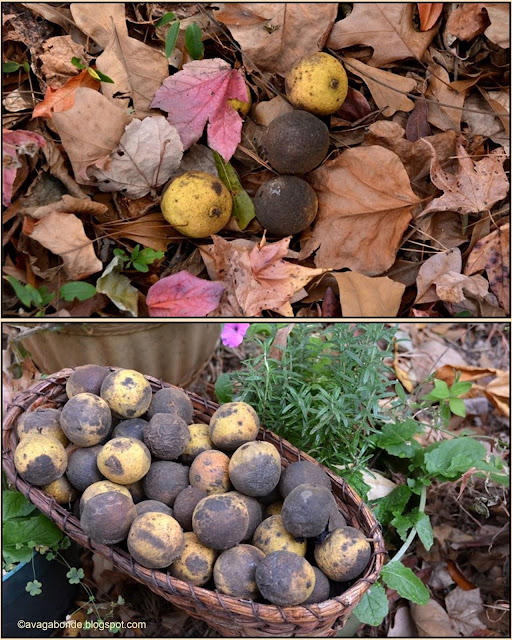 This was my husband's favorite tree.  Our yard has many trees, mostly pines, but this tree was special to him.  He enjoyed placing a chair next to the hydrangea bush and read in the shade, under the spread of the branches of his black walnut tree, like in the picture below. 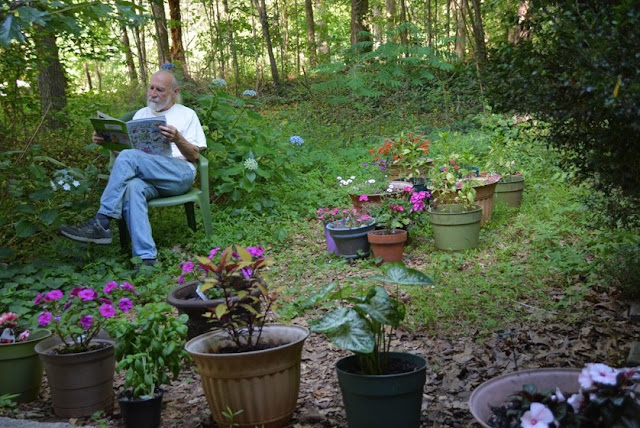 Below is another picture of him reading again under his black walnut tree.  This photo was taken on 17 June 2016, on our 49th wedding anniversary. 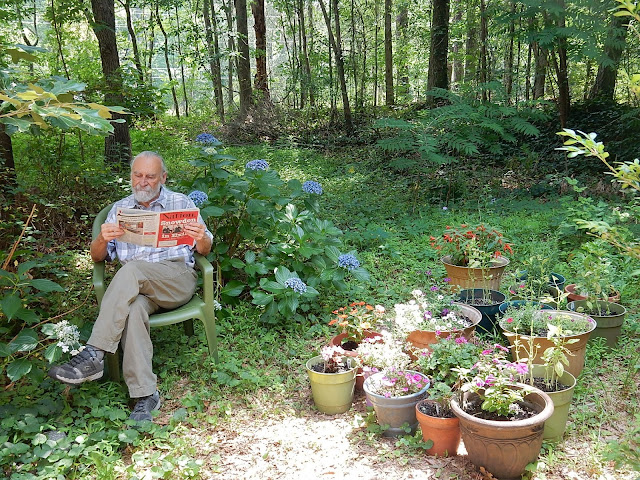 Next Sunday is June 17, 2018, our 51st wedding anniversary.  Unfortunately he will not be aware of it.  About ten days ago my husband woke up with a pain in one of his feet and could not walk.  He was in the bedroom upstairs, in Nashville, and could not go down the stairs.  With my knee surgery I cannot go upstairs yet while holding a tray of food.  For his own safety and mine I had to admit him into a nursing home memory care unit, close to Nashville, on Sunday June 3rd, 2018.  By now his Alzheimer's disease has greatly progressed - he cannot say more than 4 or 5 words in a day, does not understand much and is unaware of his surroundings.  The nurses told me that they were surprised at how well he was still doing physically after almost 12 years with the disease.  When I returned home in Nashville that Sunday I received a photo in a cell phone message from our neighbors in Georgia.  There had been heavy rain and high winds all week from the remains of a tropical storm and a tree had fallen on our roof.  Below is the picture she had sent me. 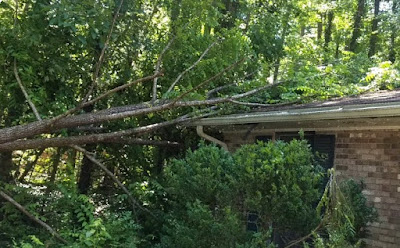 So I had to drive to Georgia to inspect the damage.  The drive from Nashville was pleasant because it was a warm and sunny day.  I stopped at my usual little rest area on highway I-24.  It is a small rest stop for cars only, no trucks but the view of Nickajack Lake is peaceful and relieves the stress of highway driving.  Below is a photo I took last November when going to Georgia and the one, on top, I took last week.  I usually stop and drink my coffee, eat a cookie and watch the water. 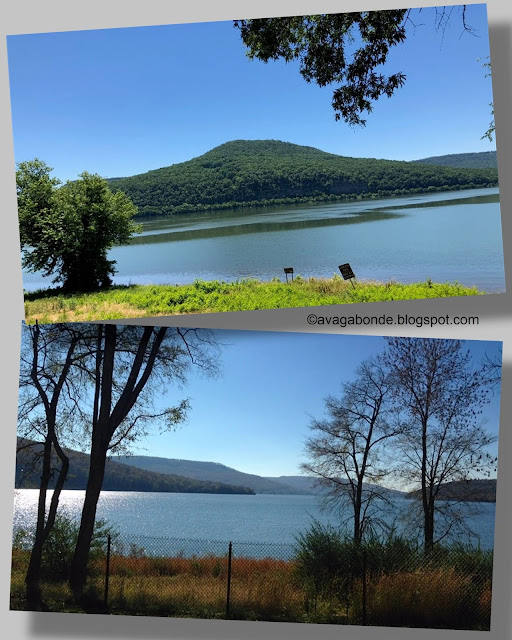 I was hoping that the tulip poplar tree or one of the small oak trees in the front yard had been the one to fall on our roof.  However, arriving at the house I realized, sadly, that is was my husband's black walnut tree.  The tree was not dead, just uprooted.  It had fallen the day my husband went into a nursing home - strange coincidence.  No one now will read under its branches, for ever more. 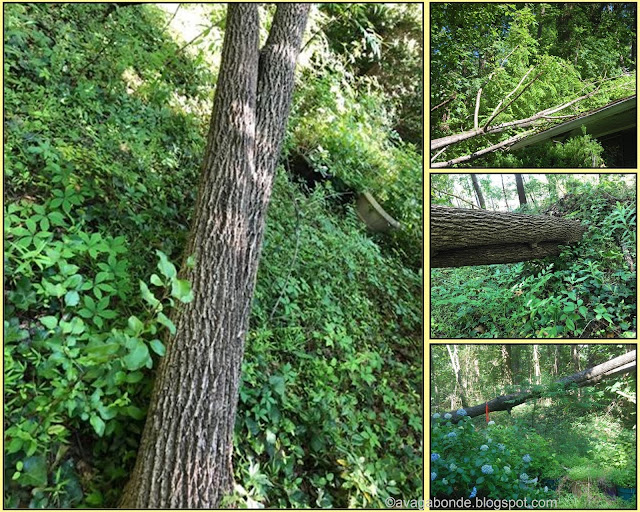 The next day, last Thursday, a tree cutter team removed the tree from the roof and took it away. (Click on collage to enlarge.) 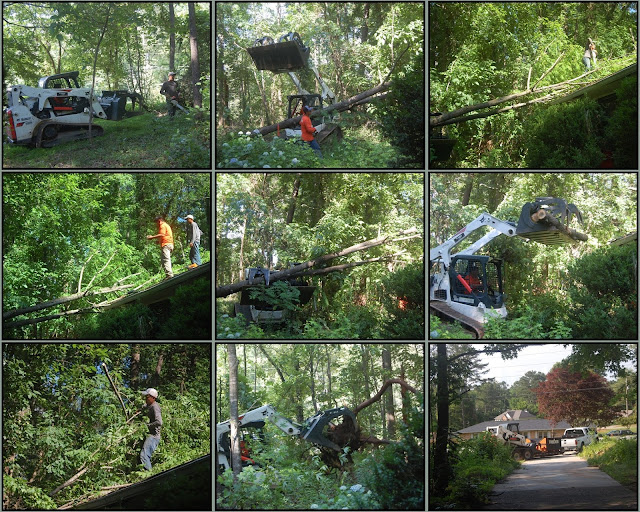 I asked them to give me a small disk from the tree.  After they left I picked up a little branch on the ground that still had some immature black walnuts.  I wish I knew how to carve wood. 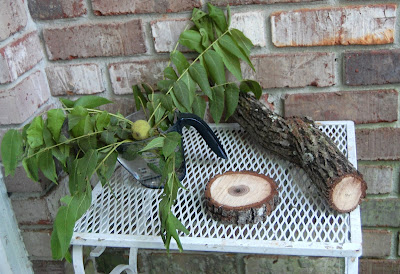 Walking back to the front yard it looked strange now without the black walnut tree.  Behind the hydrangea bush there was a large empty space.  Next to this bush, my husband's planters did not have the usual colorful annuals; weeds had grown into them instead, and the pots look forlorn.  A lone black walnut, its tough casing about gone, was hidden amongs the leaves. 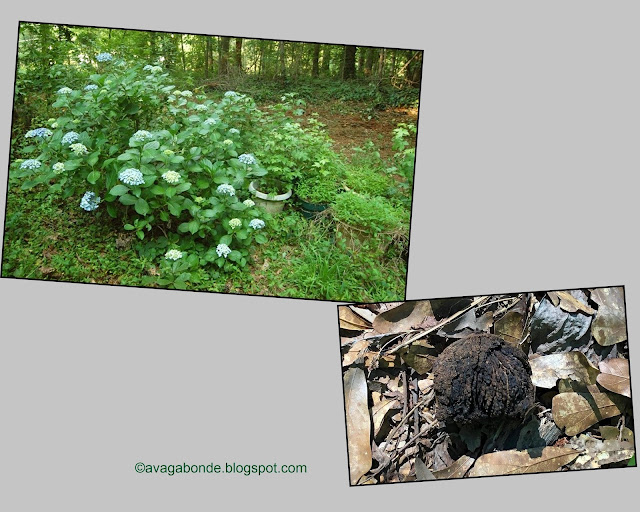 The hydrangea had certainly grown and had many lovely blossoms.  We had bought it in a small pot in LaGrange, Georgia, during their Hydrangea Festival in June 2010.  (I still have to write a post on this.)  I need to find out when is the best time to transplant it so I can take it to Nashville. 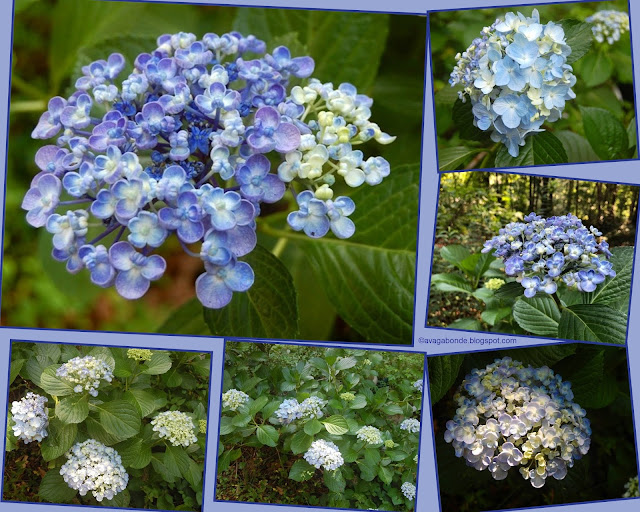 The house insurance adjuster told me on Friday that a new roof is required as the strong winds have damaged other parts of the roof, and the roof is old.  I'll have to get busy getting estimates for this now instead of clearing out the house.  Driving on the roads around the house, it looks the same.  But when I come back to the house - it is not the same.  I am alone among the boxes, but still, Georgia feels more home than Nashville - I have been living here almost 42 years now; everything is familiar and gives me some comfort.  The years have gone so swiftly by, speeding by as I was busy working, traveling, blogging.  Now my husband will not come back to this house, and our two special trees have left as well.  With this harsh reality should I have depressed thoughts?  No, I won't go gentle into that good night ...


Do not go gentle into that good night,
Old age should burn and rave at close of day;
Rage, rage against the dying of the light.  - Dylan Thomas

To warm up our thoughts here is a bright bouquet of hydrangeas by Japanese watercolorist Tsukiyo Ono. 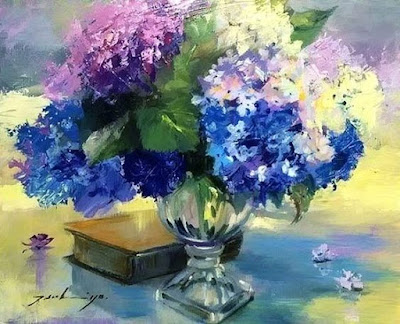