Fading roses in the Roselawn garden ... and the Nashville Connection 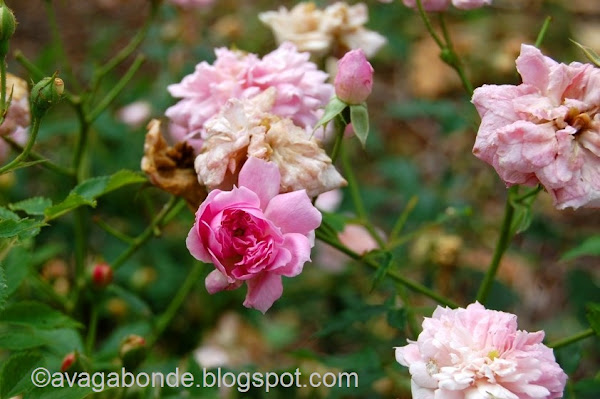 In my last post I recounted how I drove from Nashville to my house in Georgia in late April 2022 so I could vote in the French presidential elections on April 23, 2022. I explained how the vote was done at the French Consulate in Atlanta. Then on May 19, 2022, I drove again from Nashville to Georgia so I could vote this time in the US General Primary Elections. On Friday May 20th I voted at the Cobb County main office in Marietta, GA - this was the last day for "early voting." The general election day was Tuesday May 24th. 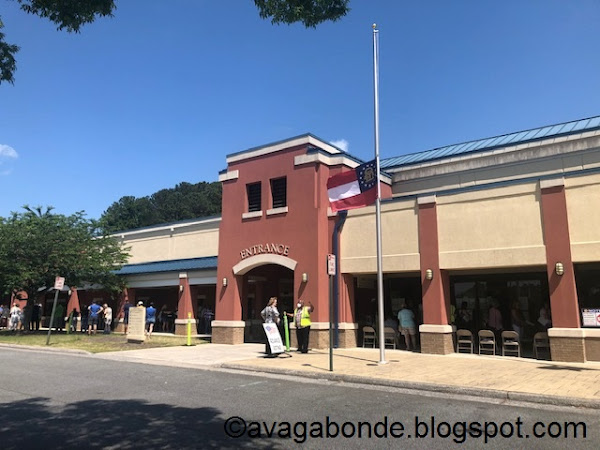 This is the way voting was done in Cobb County: after your name and a form of identification is checked you go to a booth and click on the candidates' name you select on a screen. When you are finished, your selections appear again and you have to certify them. Then a printed document comes out of the machine. You have to read it and certify it again, and sign it. Then you take this paper to an official who asks you if this document shows your vote accurately. You affirm it. He places the document in a huge electronic reading machine and all your selections are recorded. He indicates that your vote has been entered and gives you the sticker "I'm a Georgia voter." I don't know if voting is done the same way in all the US states. 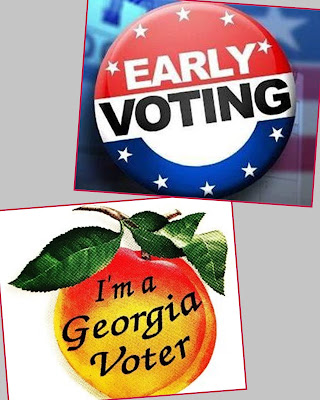 Both the French elections and the Georgia elections garnered much interest in the country and made the first pages of the main newspapers. Former president Trump who had actively tried to overturn the results of the 2020 Georgia elections came to Atlanta to campaign against the current Republican Governor Brian Kemp, but Kemp won the Republican 2022 primary anyway. Stacey Abrams is the Democratic primary winner for 2022; she ran in 2018 and narrowly lost to Kemp. Below are pictures of Republican Governor Brian Kemp and Democratic candidate Stacey Abrams (Courtesy Atlanta Magazine.) 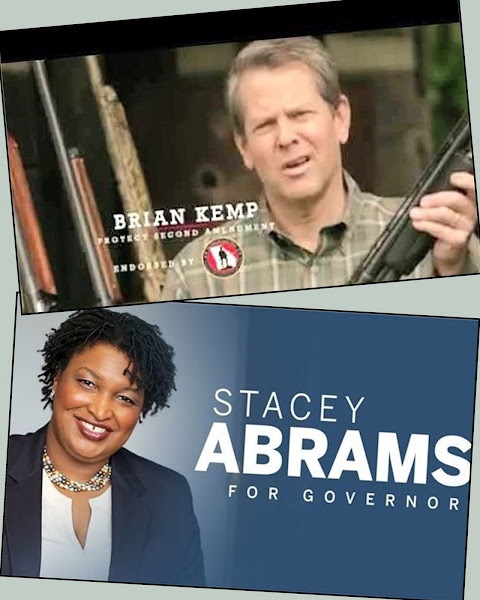 On Tuesday May 24 since I had voted already I decided to go visit a garden. The weather was pleasant and mild, in the low 80s F (27 C.) I had never been to the Rose Lawn House Museum in Cartersville, GA. It is 19 miles away fom my house (30 km) and took less than 30 minutes to reach. I just knew this was an historical Victorian mansion with a rose garden. I was not aware that it had been the residence of a famous evangelist in the long ago. I arrived at 10 am and entered the house for a tour. Two other visitors joined me presently. 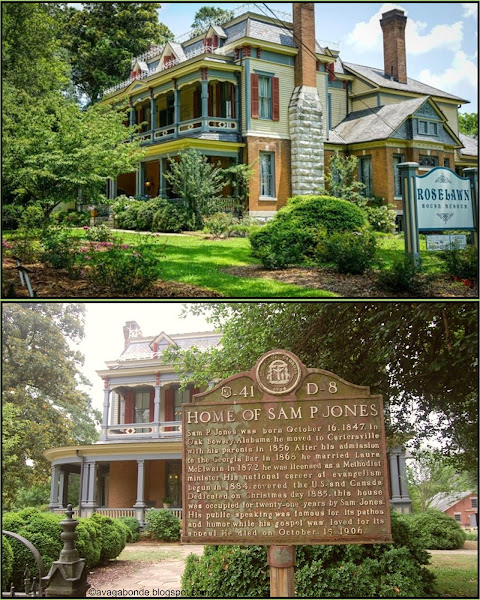 In the 1860s the house had one story with an attic. The owner, a local merchant, Nelson Gilreath, converted the attic into bedrooms. Samuel Porter Jones, the nationally renowned evangelist, purchased the house in the 1880s and added two stories in the back of the house. In 1895 he enlarged the original structure by raising the house with hand jacks and mules so a new larger ground floor could be inserted, with a basement underneath. He lived there with his wife and children until his death in 1906. His widow, Laura McElwain Jones, continued to reside in the 18 room mansion until the 1920s. The house was purchased by another owner in the 1930s but became vacant in the 1960s. In 1978 Bartow County acquired the property and converted it into a museum to house the memorabilia and writings of Sam Jones and Rebecca Latimer Felton, another resident of Cartersville. The museum is open 3 days a week and hosts weddings and special events on weekends as well as arts and crafts fairs during the year. It contains furnishings of the period and of the Jones family, with many photographs, including of their six grown children. (Click on collage to enlarge.) 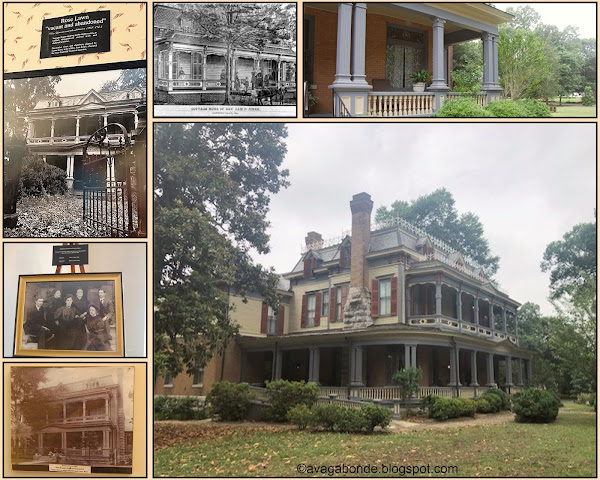 The docent gave excellent historical information on the house and many anecdotes on the Jones family. The newer ground floor was formal with large rooms. 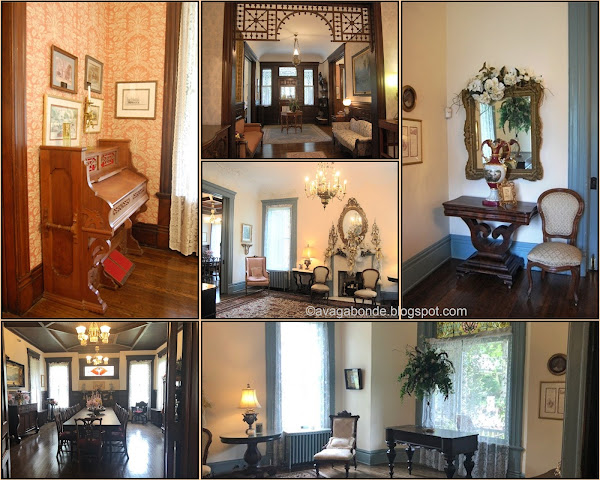 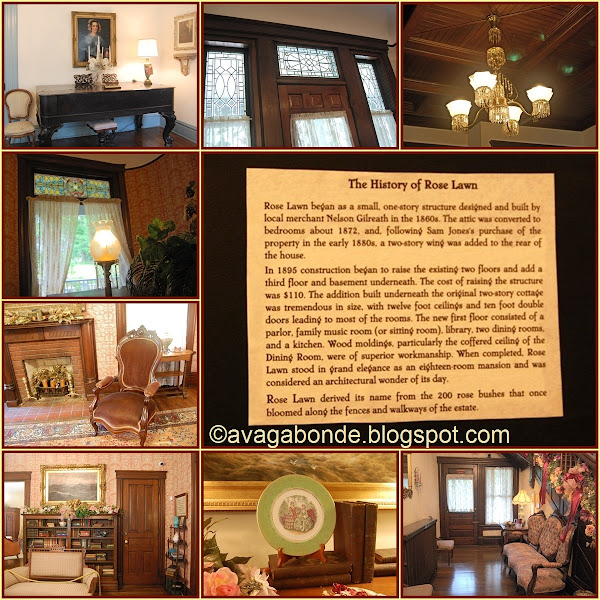 There were large portraits of Sam Jones and his wife Laura as well as notable paintings on the walls. 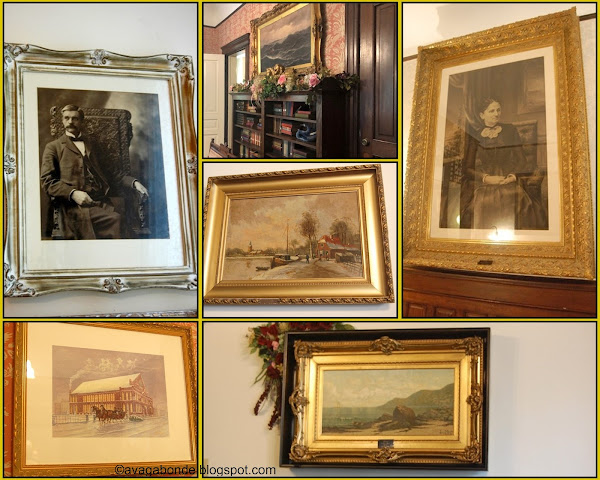 On the second floor, which had been the original ground floor, we saw the original entry door (on left in collage below.) A small room and a bathroom had been made into a bride's boudoir. 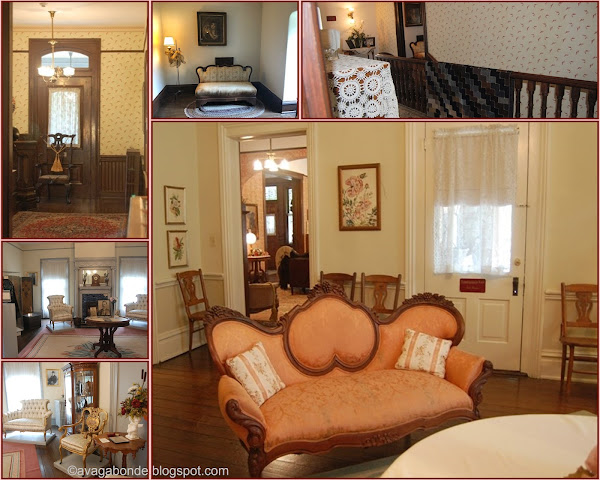 A couple of rooms were more dedicated to Rev. Sam Jones and his family. Samuel Porter Jones (1847-1906) became an attorney in 1868 and married Laura McElwain. After the loss of a child he became an alcoholic and left his law practice. As his father lay dying he promised him he would stop drinking and start preaching. At first he began preaching locally but because of his compelling delivery, style and wit he attracted a national congregation. He was on the road preaching more than at Rose Lawn in Cartersville. He preached to crowds of up to 50,000 in cities like Boston, MA; Cincinnati, OH; Los Angeles, CA; Toronto, Canada and more. In five weeks in Chicago, IL, he preached to a quarter of a million people. He also had his sermons and several books published. 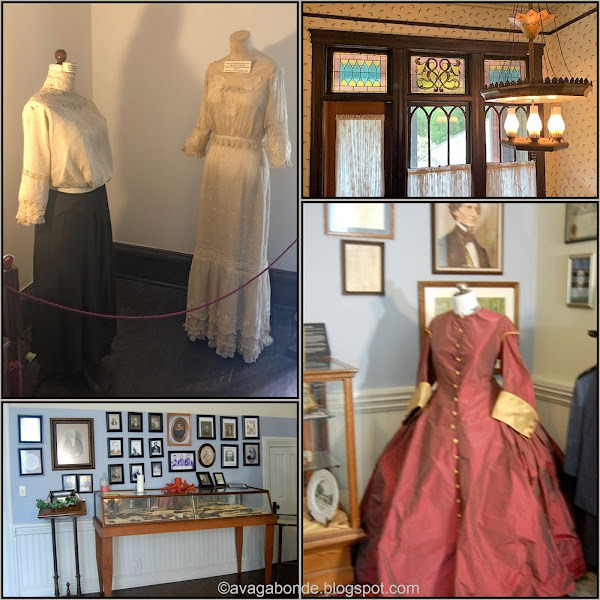 For twenty years in the summer months Rev. Jones preached from a wooden pulpit in an open air pavilion that could hold 5000 attendees. People would come from long distance to hear him. They came in specially chartered trains from Atlanta and Chattanooga and more came on horseback and buggy. In 1886 he had the Sam Jones Union Tabernacle built in Cartersville (photo below) where he preached, together with several other well-known ministers, to a crowd of 6000+. The revival would last 10 days. The tour guide said he was the "Billy Graham" of the 19th century - the evangelist rock star of the age. 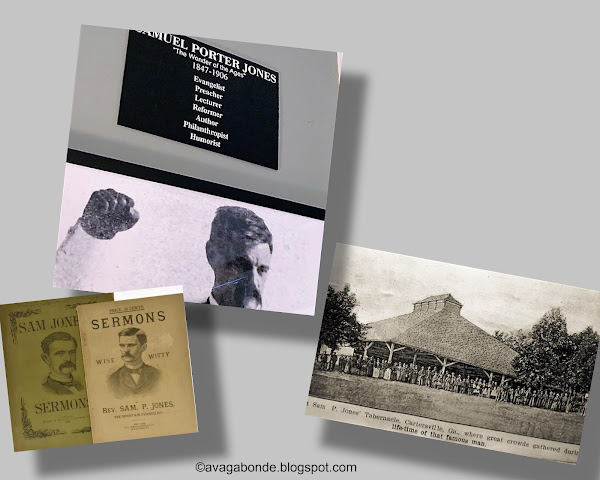 An area in a room was reserved for "the Nashville connection" as our tour guide called it. Rev. Jones went to preach often in Nashville and drew large crowds in tent meetings. In 1885 he drew the attention of Captain Tom Ryman who operated 35 steam boats on the Cumberland River for passengers, freight, bars and gambling. After he listened to Rev. Jones Captain Ryman "got religion." Upon leaving the crowded tent and seeing people outside who could not get inside he promised to build a large tabernacle in Nashville where Jones could preach to all. By 1890 Ryman had the Union Gospel Tabernacle built. Ryman had asked Rev. Jones to move to Nashville but Jones refused. The exhibit in the room showed the original Bible that Jones used in Nashville. 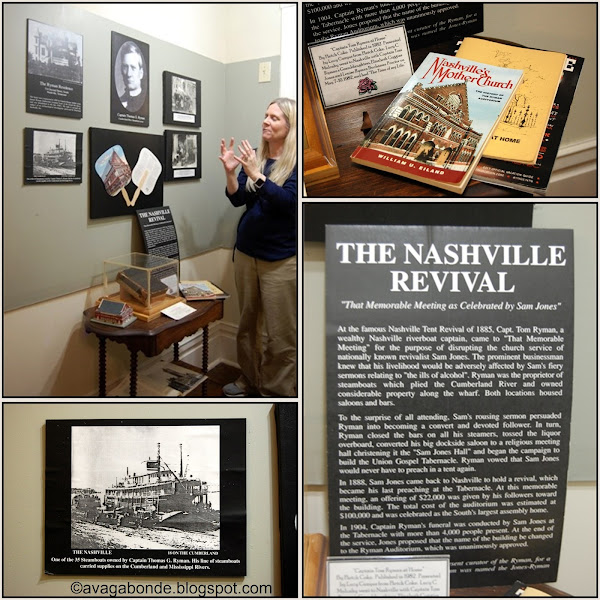 Rev. Jones went often to Nashville to hold revivals where he would preach in the center of the tabernacle (that only had one floor at the time.) He often complained of being crowded. In 1897 the Confederate Veterans wished to hold their biggest convention there. They contributed to have a second floor gallery built. After Captain Ryman died on December 23, 1904, Rev. Jones held a funeral service for him on Christmas day and asked the packed tabernacle if they agreed to have it renamed The Ryman Tabernacle. The audience of 4,000 rose and said "yes." In later years the building became the Ryman Auditorium home of the original "Grand Ole Opry" where country music was born and gave Nashville its "Music City" nickname. 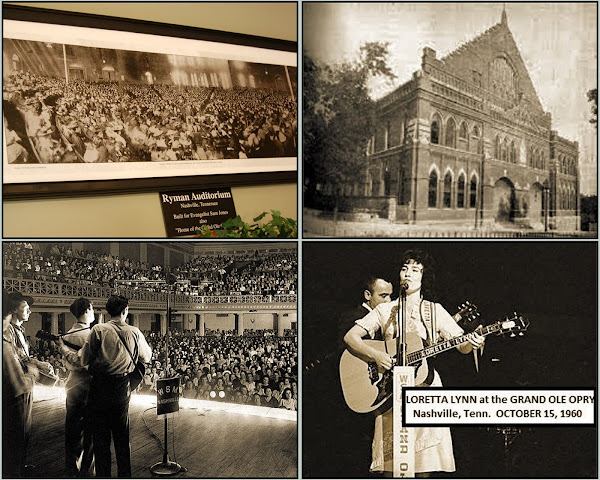 A room was dedicated to Rebecca Ann Latimer Felton (1835-1930) who was also from Cartersville, GA in Bartow County. Her husband William Felton (1823-1909) was a member of the United States House of Representative and she ran his campaigns. She was a prominent woman in Georgia: a writer, lecturer, feminist, an advocate for prison reform, for women's suffrage and educational modernization, but unfortunately had also been a slave owner and a white supremacist. When a Georgia senator suddenly died before the general election in 1922 the GA Governor who was a candidate for that election chose Felton to serve as senator. Only 27 months after the 19th Amendment (giving women the right to vote) on November 21, 1922 Senator R. Felton was sworn in as the first female US Senator then served for one day. She was the first female senator for GA. (The second woman senator to represent Georgia in the US Senate came in January 2020 when Governor Kemp appointed Kelly Loeffler to fill the seat left vacant when the current senator became ill. However when Republican Loeffler ran for the Senate in November 2020 she was defeated by democrate Raphael Warnock.) The room contained Mrs. Felton furnishings, memorabilia, books and her guitar. 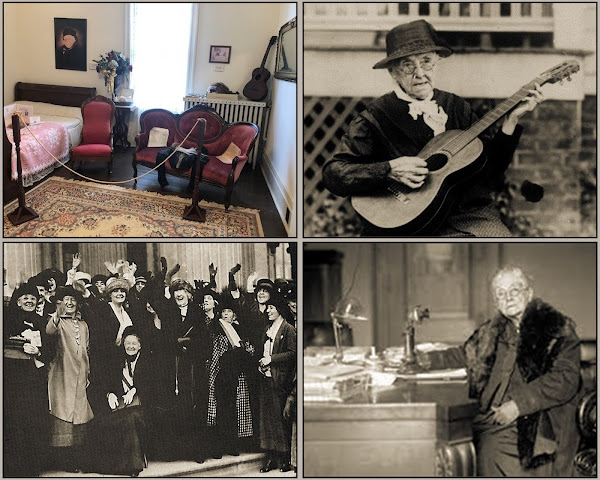 Some of her dresses were also exhibited. One of them, a black dress, is protected in a glass case. A sign above it states that around 1900 "Mrs. Felton was asked to make one of her numerous speeches in Atlanta. In desperation of what to wear and not having time for a trip to Atlanta, she took her curtains from the window and dyed them black. She then made the dress, added lace ribbons and fringed tassels ... and wore it with a taffeta petticoat." It also says that when Margaret Mitchell wrote "Gone with the Wind" she remembered her friend Rebecca Felton's dress and used it as an inspiration for Scarlet O'Hara's curtain dress in the book. 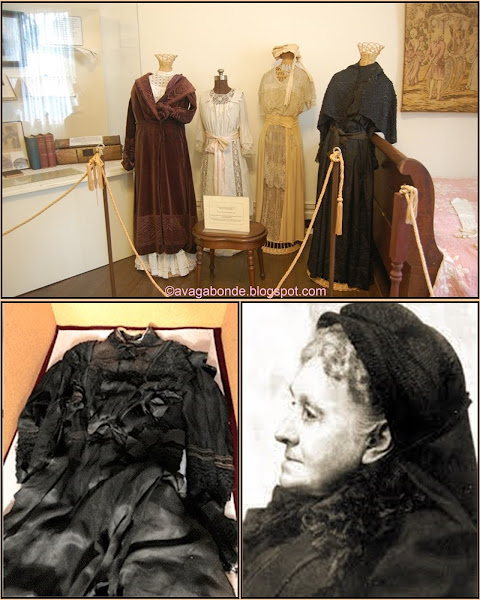 The rest of the rooms were bedrooms with some more bedrooms on the third floor. 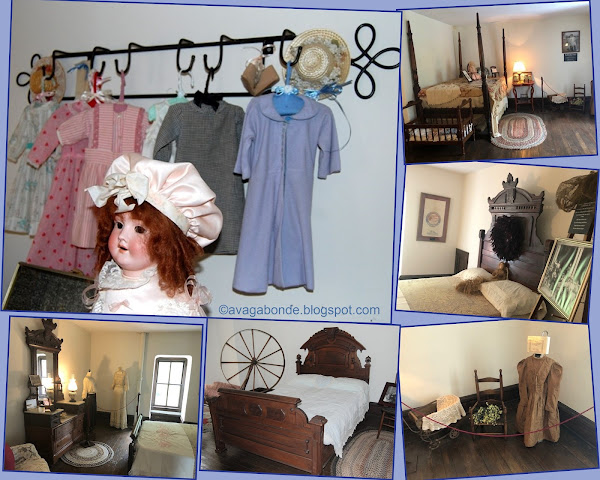 The tour was now over. The two visitors returned to their camping on Lake Allatoona and the docent went to lunch. She invited me to stay and visit the grounds as long as I wished. The 3 1/2 acre property also includes a carriage house (that is used for weddings and parties,) a one-room school and a smokehouse. I left the house and walked around to the school house and carriage house. Please click on the collage so you can read the information panels. 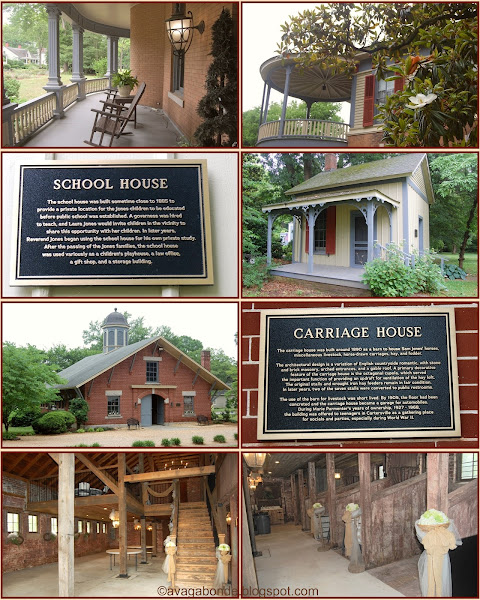 There was no one around now and it was lovely walking under the huge magnolia trees with fragrant blooms. Some of those trees had grown so high over the decades that they would not fit into my photos. 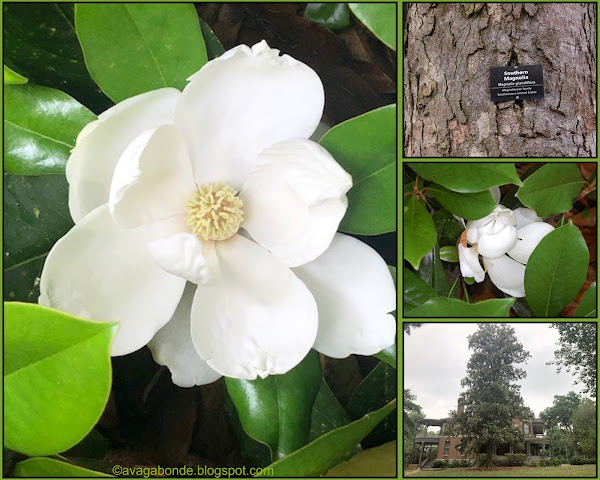 Finally I was able to check all the roses in the garden - the reason really why I had driven to this house. Rev. Jones' wife Laura had planted a beautiful garden with 225 rose bushes (thus the name Rose Lawn.) Over the years and with neglect the roses were gone when Bartow County purchased the house and grounds. The GA Master Gardener Extension Volunteers (MGEV) helped to restore the garden with the return of 200 rose bushes. Because of the MGEVs work the Rose Lawn garden is considered a historical demonstration garden. The rose bushes are planted around the lawn with information panels. Most of the roses are "heirloom" roses, also known as "old garden" or "old-fashioned" or "heritage" or "historic" or "antique" roses - they belong to a class of old roses that existed before the introduction of the first Modern Rose "La France." (French rosarian Jean-Baptiste Guillot (1827-1893) introduced the pink rose cultivar "La France" in 1867. It is considered the first hybrid tea rose.) The heirloom roses bloom in early May. Most of the blooms were fading or already faded by the time I visited the garden in late May. I still took over 65 photos while trying to find some roses in bloom. This is the way the roses were indicated on small panels, for example the rose Safrano below (introduced in 1839.) 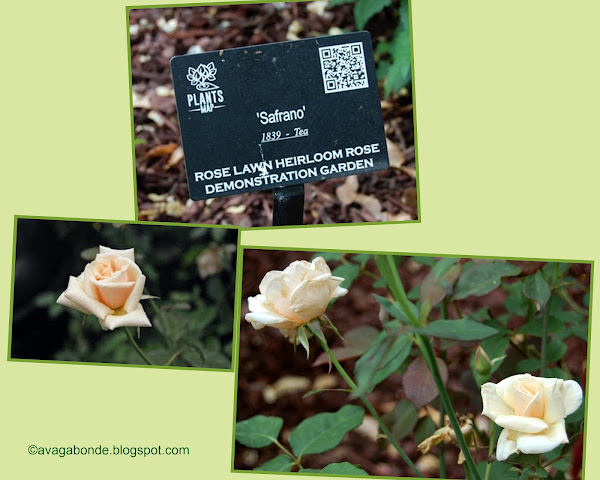 The old roses have such memorable names. Some in the garden are: Reine des Violettes (1860) on top in the photo below, and Melle. Franziska Kruger (1880.) 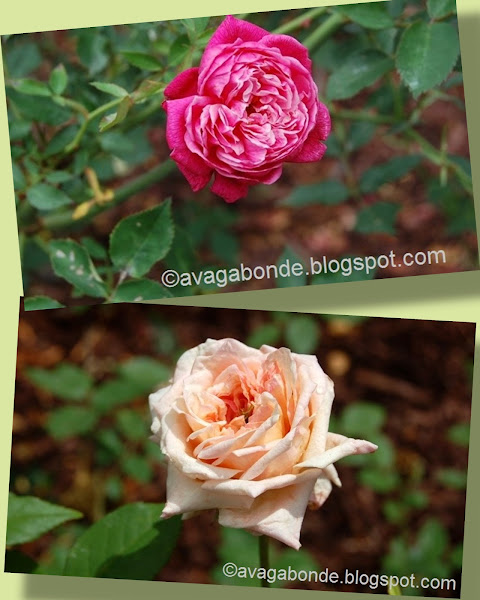 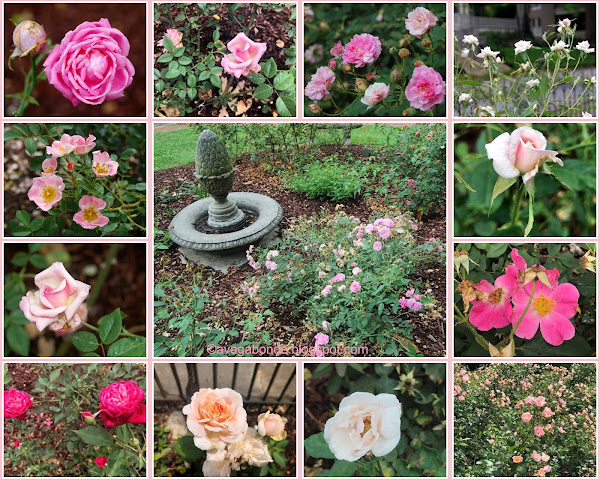 When I drove back to Nashville last Sunday May 29, 2022, a nice surprise was awaiting - the lonely rose bush that had been planted by the side of my house had a bloom, and it was fragrant! 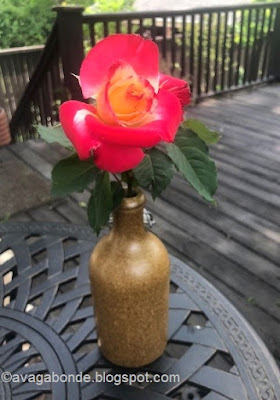