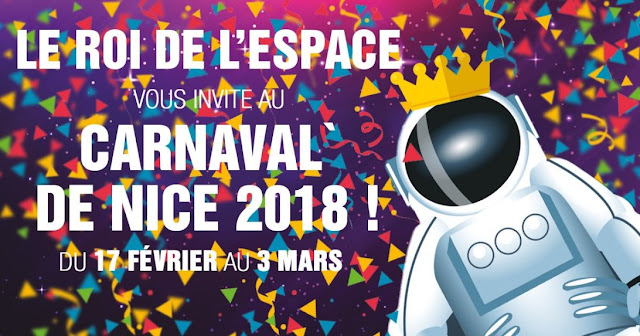 Because of my upcoming right knee surgery I won't be able to write a post for awhile.  I was going to wait until summer for this second knee surgery but the surgeon had a cancellation in a few days, and my knee is super painful now and prevents me from doing much.  I thought about writing a post but do not wish to talk about surgery, or my husband's Alzheimer's disease which is progressing - I may have posts on those subjects later on, but I wished to write about something fun, alive and French.  I have been unable to go back to France, my country of origin, since 2014, because of my husband's illness, and I miss it.  In 2012 we spent some time in Nice, one of my favorite cities.  Unfortunately, most of those photographs are still in Georgia, I just have a couple here with me in Nashville: a panorama, buying a souvenir, getting ready to take a picture of an old street and my husband eating Turkish sweets in our studio in Nice. 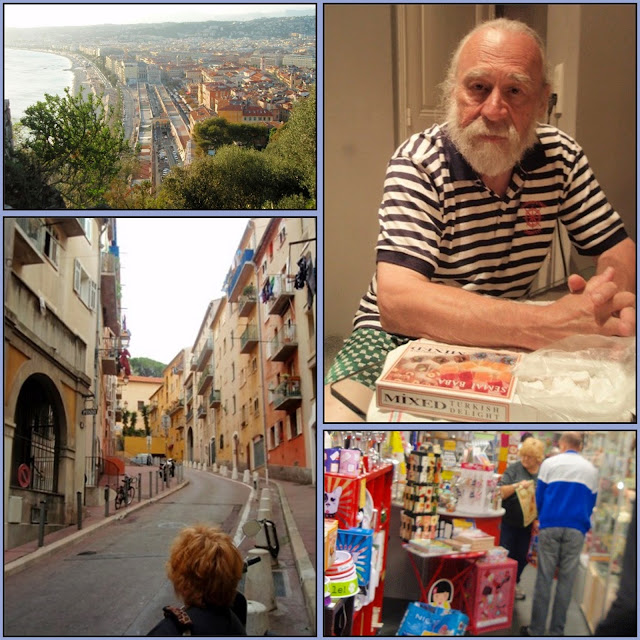 I have written about Nice in several posts.  Look at my July 20, 2013 post Nice and the Tour de France,  and at my addendum to my post of July 15, 2016 - here. The Nice Carnival is coming up and that is a fun subject!  First of all the word "carnival" is very old.  If you look for it in the American web, after you go through many entries on the Carnival Cruise Line, it will tell you that "Carnival is a Western Christian festive season that occurs before the liturgical season of Lent.  The main events typically occur during February or early March, during the period historically known as Shrovetide (or Pre-Lent.)"  Not quite, though.  As usual, the early Christian church took over the carnival festivities, as they did with many other festivals and holidays, such as the Christmas tree, etc., from the Pagans.  The carrus navalis was the boat on which Dionysos, god from the sea, entered the Greek Islands.  It is the oldest definition and pre-dates the Christian one.  It was in winter and was ritualized to bring back spring and thus the New Year.  Primitive men adorned themselves with animal skins.  Dionysos, below, from an early Tunisian mosaic. 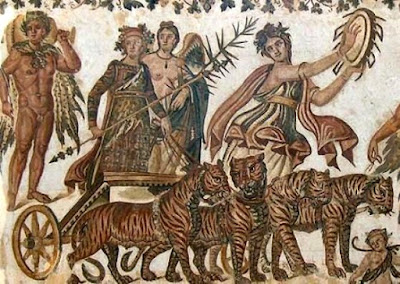 This year the Carnival of Nice will be held from February 17 through March 3, 2018.  The carnival is opened by its "king."  The topic of the carnival is taken from the King's theme.  For example in 1890 it was the King of the Bicycle, in 1908 a Diplomat King, in 1927 King of Toys, in 1953 King of the Circus, in 1995 King of Movies, in 2010 King of the Blue Planet, in 2012 King of Sports, in 2016 King of Media and this year it is "King of Space" (Roi de l'Espace.)  It includes 6 carnival parades, by day and night, with more than 1000 dancers and musicians from all over the world along 17 made-up floats.  It also includes the traditional battle of flower parades with flower decorated floats and extravagant costumed models.  The Carnaval de Nice is the largest and oldest carnival in the world and the most important festival on the French Riviera.  (Click on collage to enlarge.) 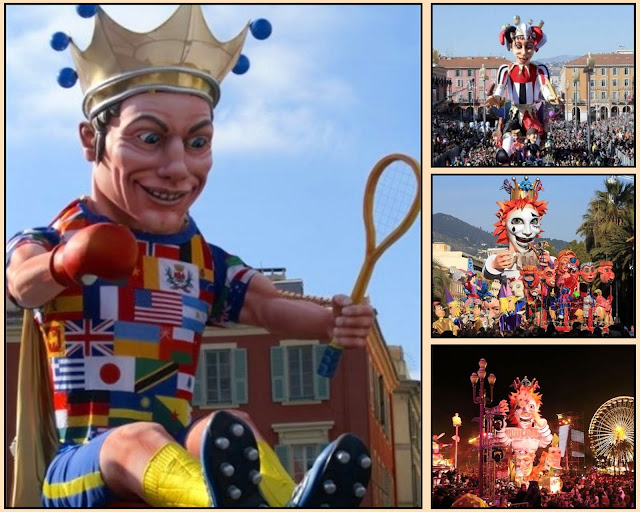 The Carnival of Nice was first mentioned in 1294 by the Count of Provence, Charles Anjou, who said he had "passed some joyous days of carnival in its good city of Nice."  The carnival of today started in the 19th century.  In 1873 a Committee for French Festivals re-organized the carnival of Nice.  They established the first street parades to provide a real spectacle for the community.  It became an annual celebration.  On various days throughout the Carnival, "Batailles de Fleurs" / battles with flowers, take place and thousand of fragrant fresh-cut flowers are thrown to the crowds from the floats. 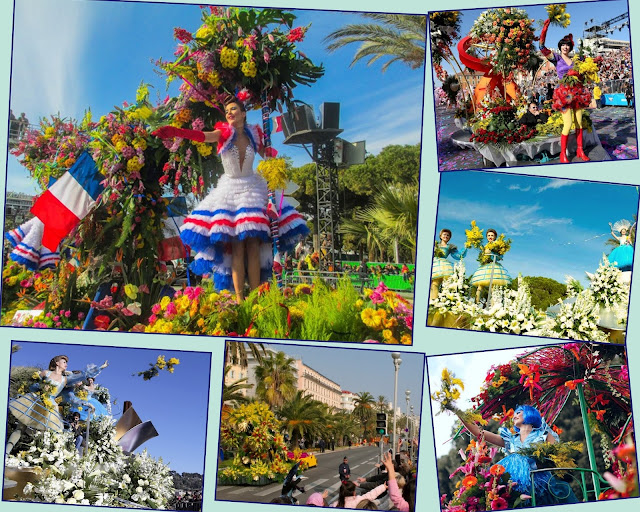 In 2009 the carnival attracted 1.2 million visitors.  The carnival brought together 1,500 street artists and 1,800 people as security guards, escorts, trackers, etc.  It required 4,000 hours of work spread over six month, twenty tons of confetti, fifteen countries, 190 journalists, media from 19 countries and a lot more.  The Nice Carnival has been famous for a very long time.  Below are some vintage postcards on the carnival. 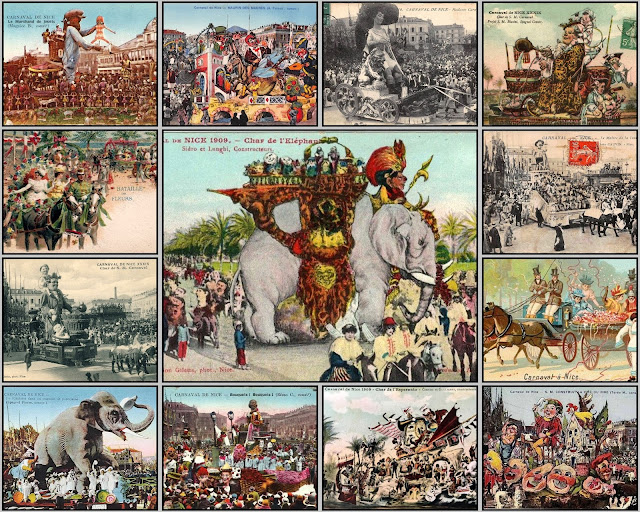 In addition to postcards, attractive posters have been created along the years, some by well-known artists.  The poster in the heading is courtesy Christian Estrosi, current Mayor of Nice. 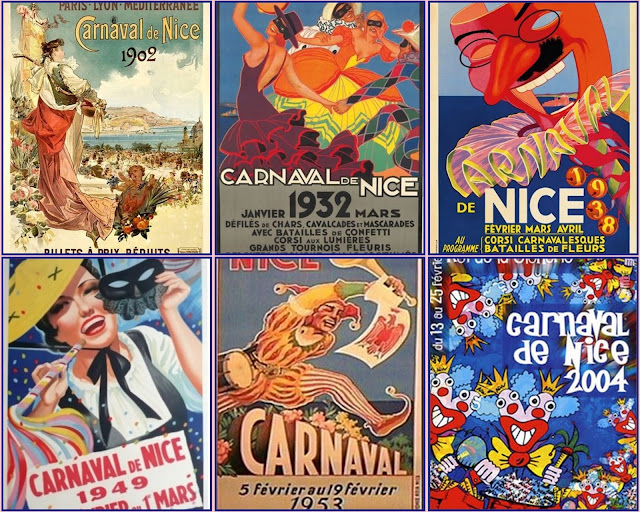 Wouldn't you love to attend this famous carnival in Nice?  I certainly would!  How much fun to be there and watch the grand parade with all the themed floats and large puppets and all the attendants in outrageous costumes.  The floats parade around the streets of Nice, day and night.  On the last day of the celebration the King Carnival, who this year is the King of Space, and stands in the main float, is burned in the Baie des Anges.  This amazing spectacle is accompanied by a massive firework and music.  Oh la la! 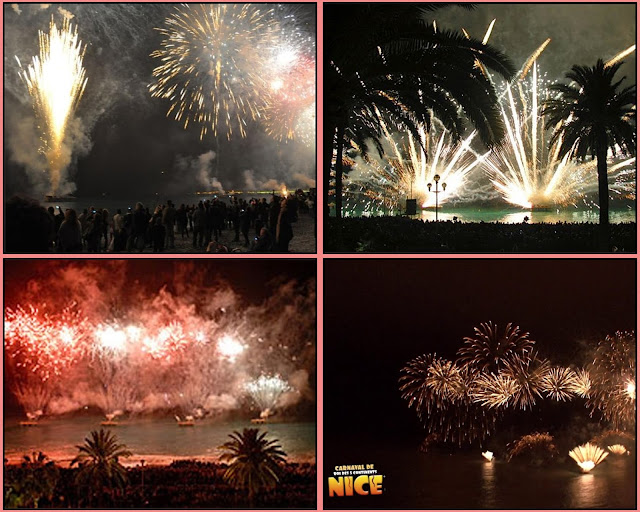 Being France, they love to make fun at politicians, French and international.  This year the president of the USA, Donald Trump, will be depicted as a giant gorilla.  I read in a French newspaper that in one or more floats giant caricatures of Donald Trump, Theresa May, Recep Tayyip Erdogan and Vladimir Putin will be included as leaders of the "Planet of the Apes."  It is not surprising as in just one year the median global approval of U.S. leadership has fallen badly, according to a recent Gallup poll (the largest single-year decline.)  After just six months of Trump, confidence in the U.S. leadership fell 75 percentage points in Germany, 70 points in France, 57 points in Britain and 54 points in Japan.  So, no wonder they love to make fun of him, really all over the world.  Below is a worker making his final touches on the Nice Carnival puppet.  ( Courtesy of WAPO.) 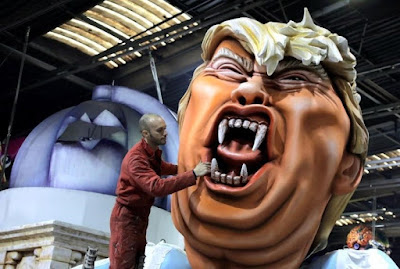 This year's theme is drawing on real-life recent events that have been in the news, such as new solar systems being discovered daily, the upcoming sight-seeing trip around the moon, and events in science and education as well as news from world politics.  Some people may not approve of this, but this is untamed France with a long history of satire, as you can remember with the famous newspaper Charlie Hebdo.  (See my post of January 22, 2015 Charlie Hebdo and French Satire.)  This newspaper says "Charlie Hebdo is a punch in the face... Against those who try to stop us thinking.  Against those who fear imagination.  Against those who don't like us to laugh ... Charlie Hebdo has no need of God, nor any need of Wall Street.  Charlie doesn't need two cars and three cell phones to be happy.  To be happy, Charlie Hebdo draws, writes, interviews, ponders and laughs at everything on this earth which is ridiculous, giggles at all that is absurb or preposterous in life.  Which is to say - very nearly eveything.  Because life is so awfully short that it would be a pity to spend it whining in dismay instead of laughing it up a storm."  And more.  What better way to chase off the gloom of winter, health problems and disillusion in world politics than going to a fun carnival in beautiful Nice?  In Nissa la Bella! (shown below along the Nice hymn sung in the Nice dialect.)