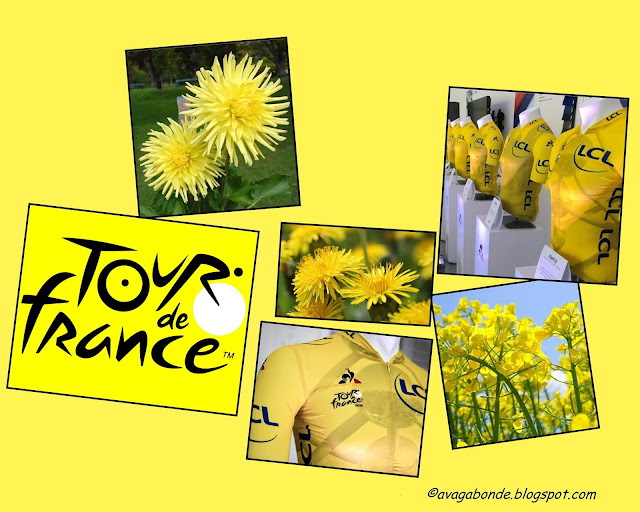 This year the Tour de France celebrated 100 years of the Maillot Jaune, the yellow jersey.  Since 1919 the leader of the general classification of the Tour de France has been wearing this yellow jersey.  It started on 19 July 1919, about ten days after the signature of the Treaty of Versailles (the peace treaty ending World War I.)  At that time the fans watching the race were unable to distinguish who was the race leader.  Until then the leader only wore a small green arm band.  The newspaper l'Auto, the original organizers of this bicycling race (started as a publicity stunt for their paper) decided that the tour leader should wear a bright colored jersey.  They decided on the color yellow because that was the color of their newspaper; it was also as an homage to Octave Lapize, winner of the 1909 Tour, who wore a yellow jersey and was killed in the war.  In addition, because of scarcity after the war and yellow not being a popular color, these jerseys were cheaper and available in all sizes.  The first yellow jersey was worn by Belgian cyclist Firmin Lambot (1886-1964) who won the Tour de France 1919.  Below is the route of the 1919 Tour, 5,560 km long (3,450 miles.) 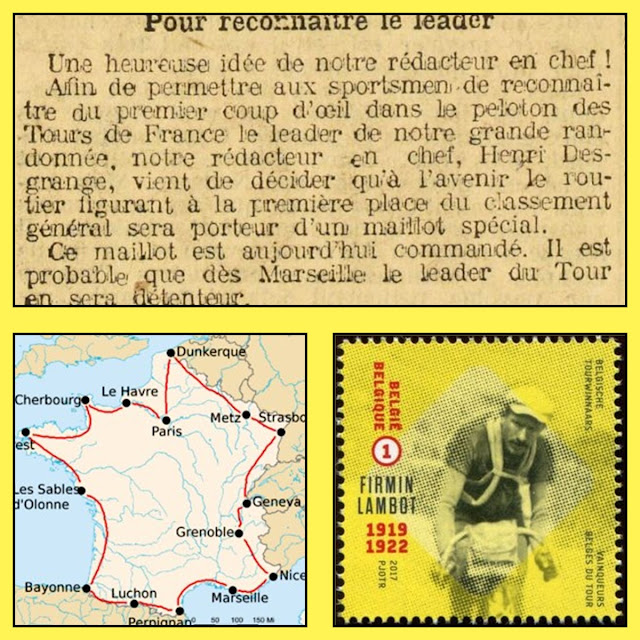 Twenty unique yellow jerseys were made this year, one for each stage.  Each jersey was customized to show a historical symbol of this 100 year old jersey and of the 2019 Tour.  Some of the background designs included city and landscape symbols of the race as well as outlines of celebrated former riders, like Eddy Merckx of Belgium who won five Tour de France.  Originally, the yellow jersey was made of wool but it was quite warm and became heavy when water logged, so it stopped being made of wool in the 1960s.  Below are photos of 4 riders in yellow: 2019 Tour winner Egan Bernal of Colombia, next to Eddy Merckx of Belgium.  Bottom left is Greg Lemond, of the USA, winner of 3 Tour de France, next to Julian Alaphilippe of France who wore the yellow jersey during 14 stages in the 2019 Tour. 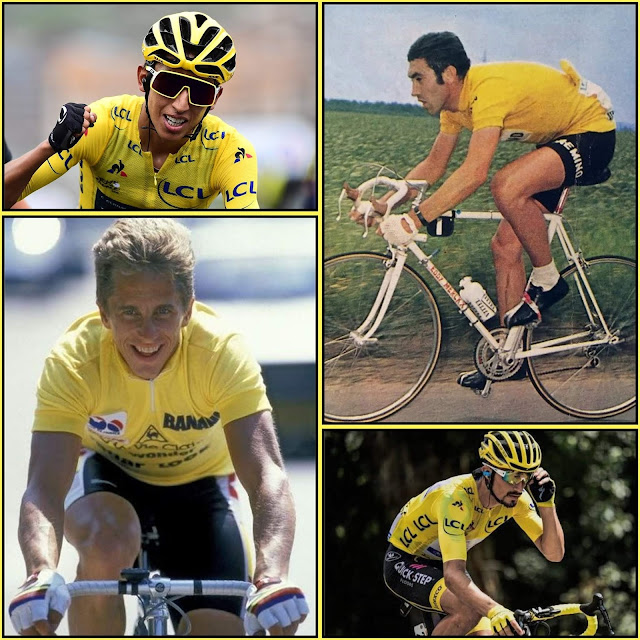 The 106th Tour started on July 6, 2019, in Brussels, Belgium and ended on July 28 on the Paris Champs-Elysees, where it has ended since 1975.  The race was 3,480 km long (2,162 miles) and consisted of 21 daylong stages.  176 riders (12 teams of 8 riders each) from 30 countries started the race; the race ended with 155 survivors  -:)  There were 7 flat stages, 5 hilly and 5 mountain stages.  The 2019 Tour was a race for hill-climbers as they rode stages in the Vosges Mountains, The Monts du Lyonnais, two in the Massif Central, four in the Pyrenees and spent three and a half days in the Alps.  I watched most of it while cleaning my house in Georgia.  I would sort things in front of the television in the mornings so I could watch it.  The last fornight the weather in greater Atlanta was below average, usually in the high 70s to low 80s (24 to 27 C) while it was abnormally warm in France (and in Nashville) reaching temperatures over 100 F (38 C.)  The race was exciting as usual with memorable events.  I would not have wanted to miss my yearly virtual escapade to France. 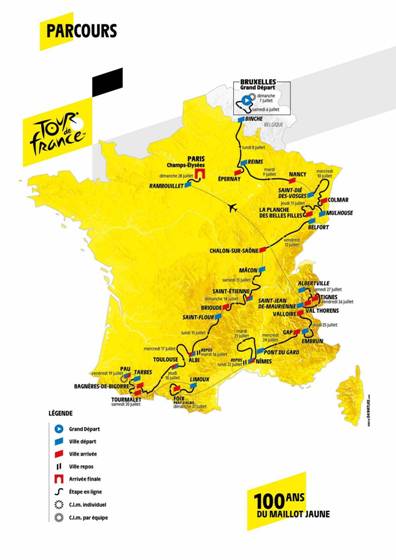 It was addictive for me and I kept looking at my TV to follow some of the best cyclists from around the world.  They rode in large cities, small villages, valleys, near lakes, fields and mountains.  It was a treat to watch the risk-taking cyclists in this thrilling race.  (Click on collage to enlarge.) 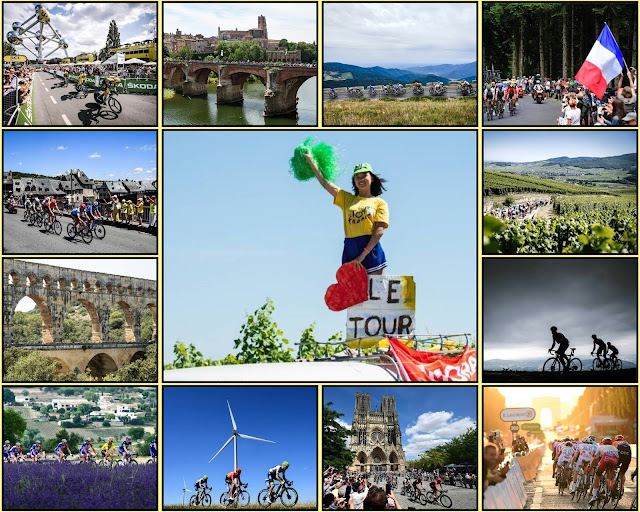 Unexpected high drama came when during the 19th stage, last Friday, it was shortened due to foul weather in the mountains.  After the riders had crested Col d'Iseran, the organizers halted the race because of hailstones, mudslides and snow.  Below are the riders near Col d'Iseran unaware of the road conditions ahead. 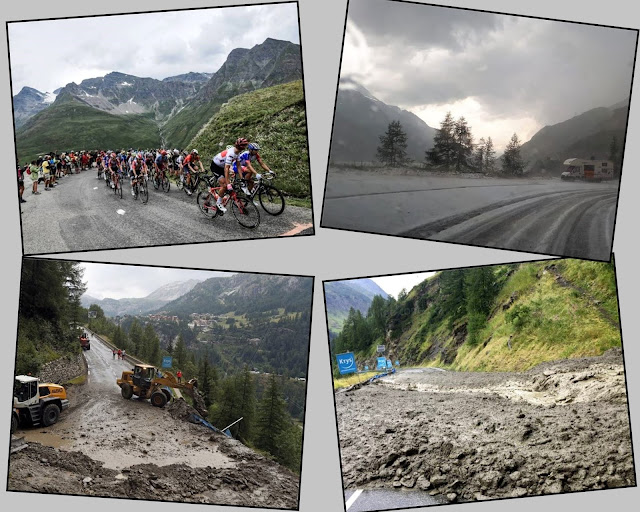 Frenchman, Julian Alaphilippe was the yellow jersey holder for 14 stages to the delight of his French fans.  But during that last shortened stage he lost his jersey to the young Colombian, Egan Bernal, who kept it to the end in Paris.  Here I'll quote Joshua Robinson of the Wall Street Journal: "This was the most exciting Tour de France in three decades ... the crackle of this Tour came down to one man.  He is a 132-pound Frenchman with a goatee named Julian Alaphilippe--and he was the one to light the fuse...  "They like seeing me race the way I race, with panache, with movement," Alaphilippe said after his stunning time-trial win.  "I wanted to burn my legs until they failed."  France hadn't seen one of its own wear the yellow jersey for so much as a day in five years..."This has been a Tour à la française." Truly,  the 2019 Tour belongs to smiling Julian Alaphilippe, nicknamed Loulou by his fans.  He was the emblem of this tour.  Below are photos of Julian, and one in the last stage wearing blue along Egan Bernal wearing the yellow jersey. 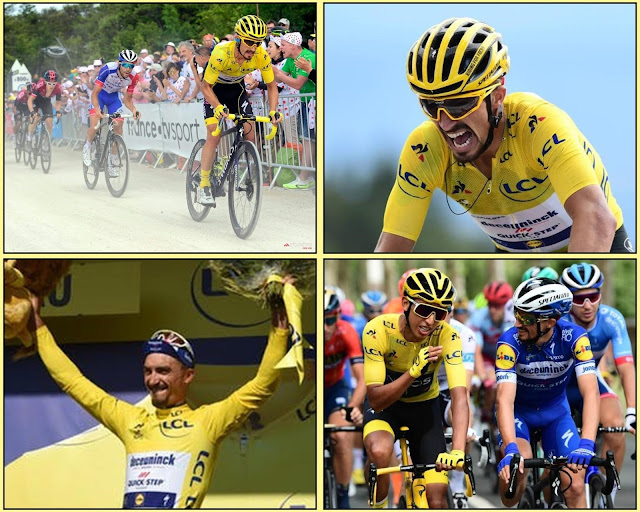 Along the way the helicopter team that shoots the race from overhead offered us stunning aerial images.  It is like a travelogue of fabulous scenery.  (Photos courtesy Helicopteres de France.) 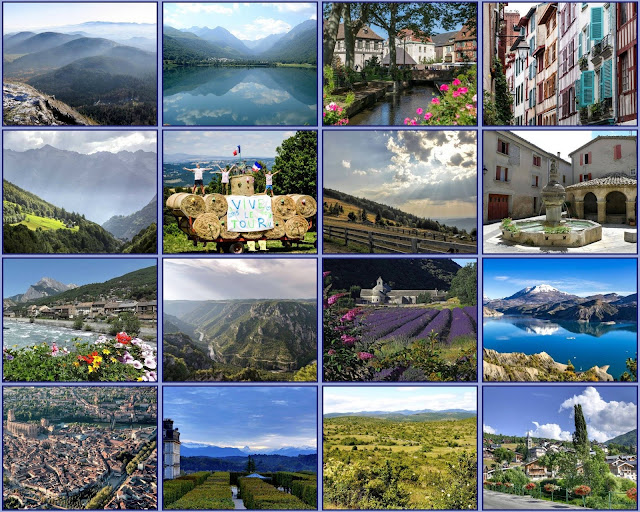 The range of architecture in castles, from medieval to 19th century, is amazing.  The aircraft captured the cyclists but also gave us unique glimpses of these historical buildings.  No wonder the Tour de France is the most watched sports competition in the world. 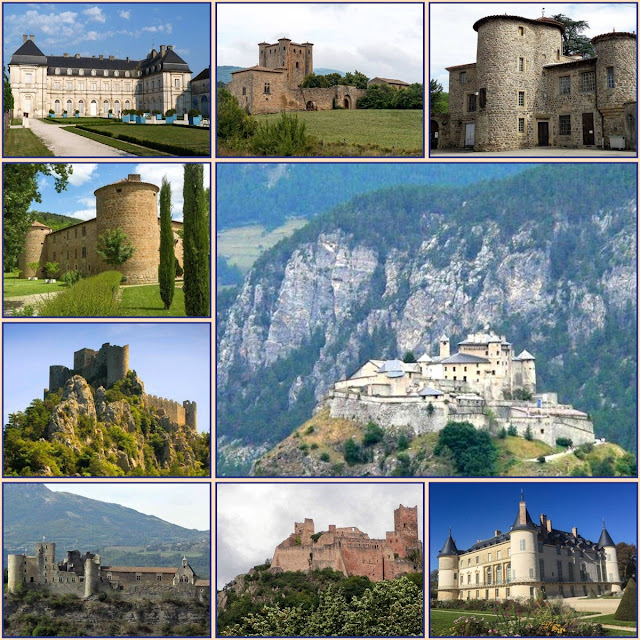 One of my favorite riders, the famed and charismatic Slovakian sprinter Peter Sagan, beat Erik Zabel's record and won his seventh green jersey overall in a Tour de France.  This prize is awarded to the leader in the points classification dominated by sprinters.  Peter said "It's nice to win this seventh green jersey.  I'm also surprised.  Every year I come back to try my best.  I'm very glad that I could achieve something like this because the green jersey is something like the yellow jersey for the GC riders.  I'm happy that I could hold the record."  Photos of Peter and of his custom-painted S-Works Venge bike, couresy TdeF. 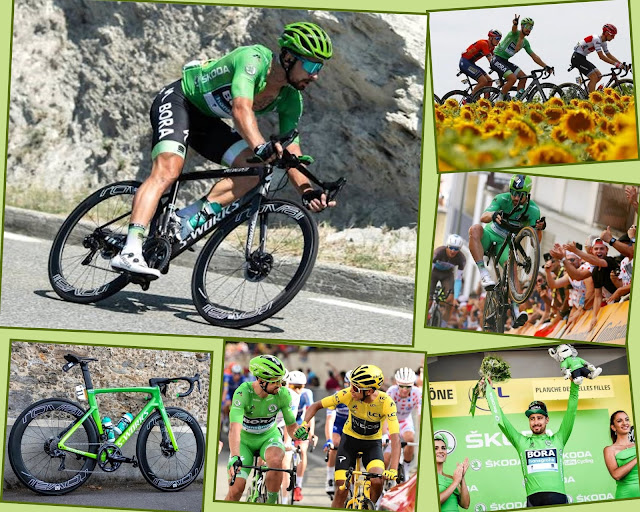 On the side of my blog you can read more on the Tour under the category Tour de France.  In my post of July 22, 2009, titled "What is the Tour de France?" I mentioned some of its history; click here to read it.   In my post of July 20, 2011, "Tour de France in the Alps" I explained the meaning of the colors of the leaders' jersey; click here to read it.  Egan Bernal officially won the 2019 Tour de France last Sunday, July 28th, shown in photo below.  He is the first Colombian and first Latin American Tour champion.  He is also the youngest winner in modern race history and in addition won the white jersey as the race's Best Young Rider.  Peter Sagan won the green jersey.  Romain Bardet of France won the polka dot jersey in the King of the Mountains classification.  Frenchman Julian Alaphillipe was judged the most combative rider - someone the race jury decided showed a "fighting spirit" during the race. 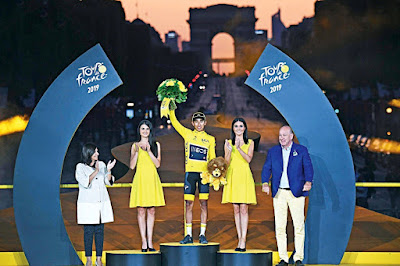 This has been an exciting Tour, unpredictable and filled with dramatic moments.  The French spectators would have liked to see Alaphillipe win the Tour since no Frenchman has won it in 35 years, but, c'est la vie... Jean-Claude Killy, the champion ski racer, said the French love sportsmen and don't really like sports.  I believe that Julian Alaphilippe, a brilliant athlete with great personality, won their hearts, even though he did not finish in first place but in fifth.  The contest is over for 2019, now we have to wait until July 22, 2020, to see the Tour start in Nice, on the French Riviera.  I can't wait ... 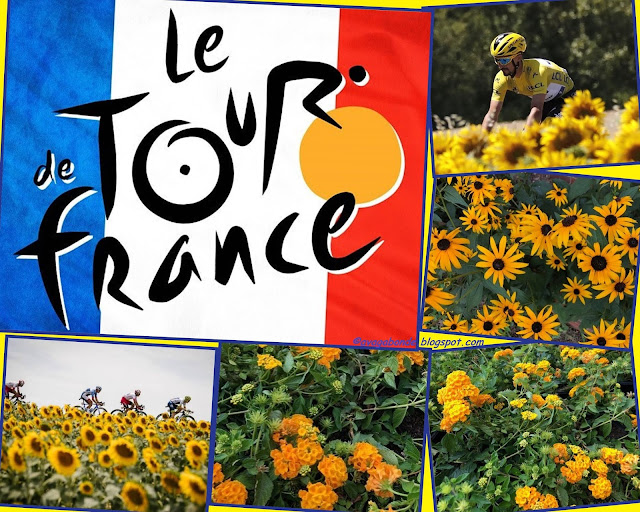